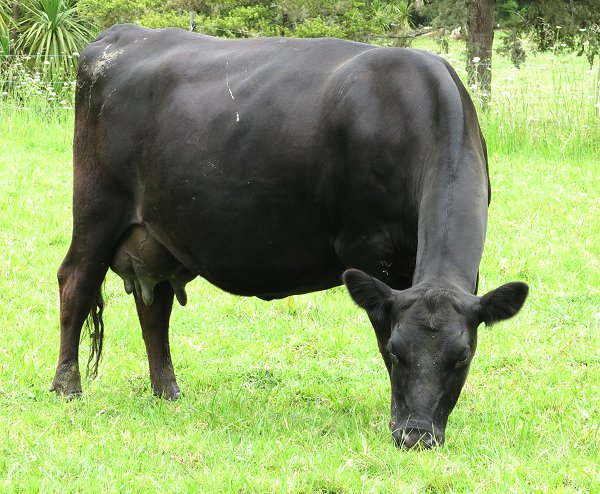 Zella's in lovely, smooth condition in late pregnancy.  She got a bit thin at the end of her last lactation, but as a mature cow she can now quite easily restore herself, even during the winter, once she's no longer milking. 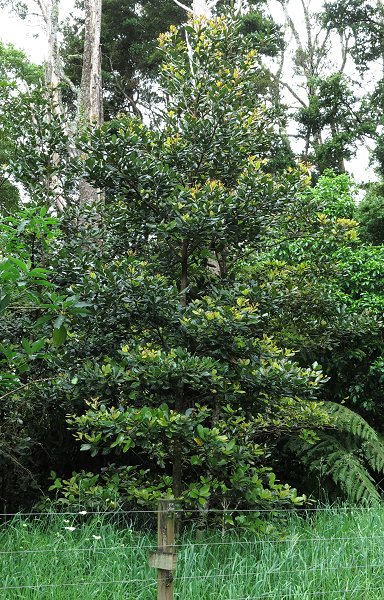 These Taraire trees are out in the open and are really pretty with their light-coloured new growth.  They're very common and grow under almost all other trees where their seeds are dropped by the pigeons, so I've not gone to the trouble of growing them in the greenhouse; but I think I might pick up some seeds and introduce them to our native tree area - the other trees aren't large enough to entice the pigeons to sit in them yet. 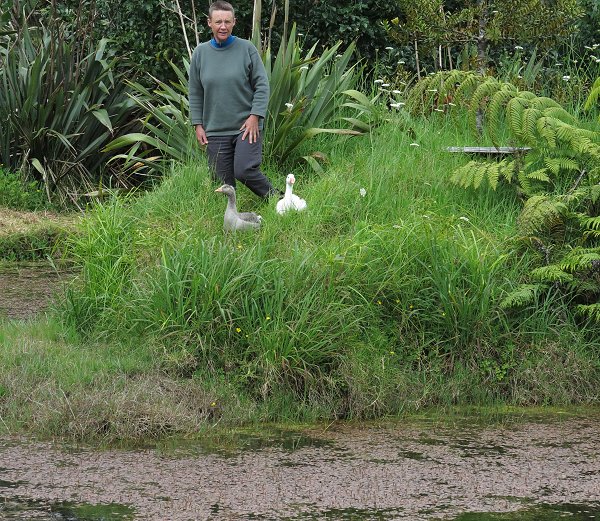 I let the goslings out of their cage this afternoon and they happily followed me wherever I went.  We went across the deck and they fell down the stairs because geese walk with their bills in the air, not really looking where they're going.  I went across the plank to the island and the geese had to get in the water to follow me; they didn't seem to like it very much.

I sat on the island and stroked them as they ate the grass around me.  They're lovely birds.

Feeling a bit feverish and fluey, I stayed in and worked on the pedigree tables for all the new heifers.  I suspect they're of little use to anyone but me, but I do refer to them often, so keep updating those pages each year so I can keep track of who's who. 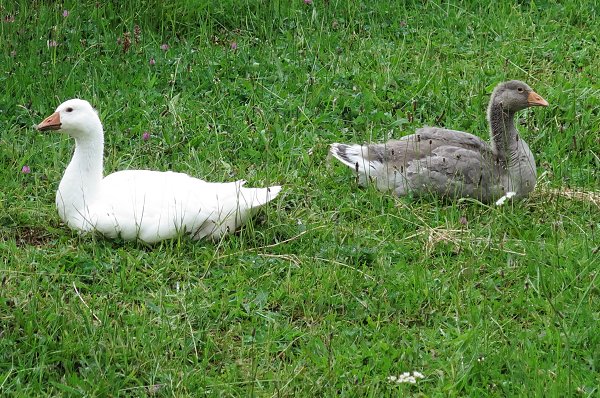 I let the goslings out for a while each day now and when the sun's out, we go and spend time together on the island. 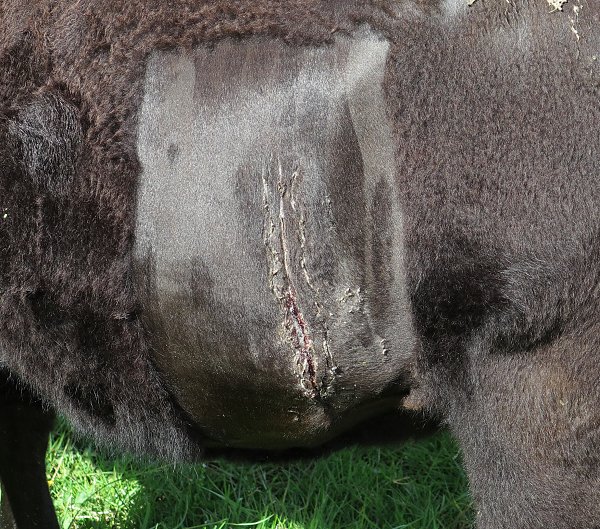 721's scar is gradually changing.  She appears to be quite healthy, thankfully.  She was reasonably approachable before calving; now she won't let me near her.  It was all the injections which damaged our relationship. 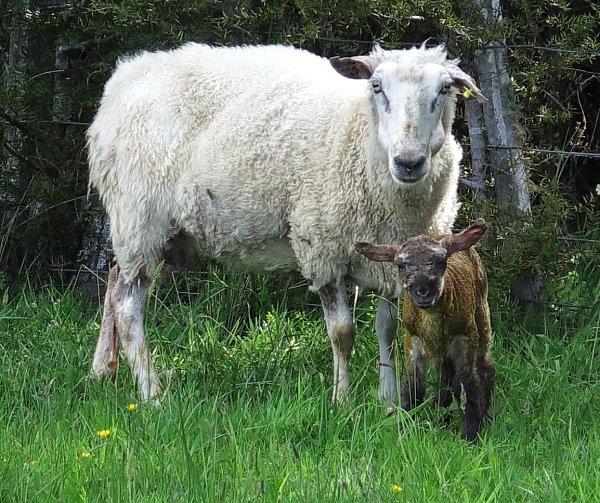 On a neighbouring property I've been puzzled by the calls of a lone sheep each evening when I've gone out to check on the cows.  Today she was close to our fence with a just-born lamb.  I doubt her owners know of her changed state (and don't welcome contact from this side of the boundary fence, although I'd have phoned anyway if there had been an obvious problem), so I kept an eye on her for a couple of days.  She looked a bit out of sorts, but seemed to come right.

Sheep are flock animals.  At least she now has some company. 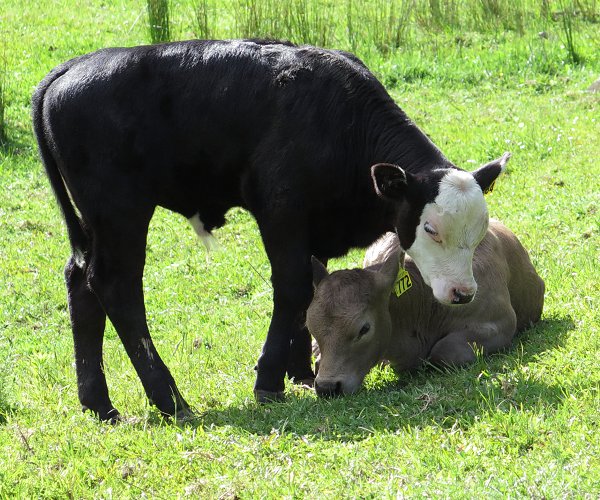 The two nuttiest calves in the herd, planning their next disruption?

Stephan picked up the bulls' booster shots of BVD vaccine from town and we got the bulls back in to the yards to receive it.  Emma 93's son 129 is to go off to a new home in the next couple of days and when it was his turn to come up the race and be weighed, he reared up and attempted to go over the top rail!  He hung there for long enough for me to have taken pictures, if I wasn't concentrating so hard on willing him to remain calm and come down again without harm.  Eventually he realised he couldn't carry on over the top and gradually slipped back onto his rear feet and got his front legs back down off the rails without too much bother and stood there, a bit confused I suspect, quietly in the race the wrong way around.

We carried on, except I didn't risk getting him to stand on the scales again, since it was the platform which gave him the extra couple of inches of height which made him think he could jump over the rails.

I'd done all the others, including measuring their scrotal circumferences and it was this bull whose measurement is most important, since he's going straight off to a mating position in another herd.  I wanted to check he'd achieved the minimum 28cm for a yearling bull.  They all measured 33cm and over, which is quite satisfactory.  Mr 129 stood reasonably quietly as I measured him and then gave him his vaccination shot.  I feel very nervous about sending a bull off to a new home when he's demonstrated such behaviour, but his settling quickly afterwards suggests something startled him more than I was aware and that treated carefully he ought to be alright. 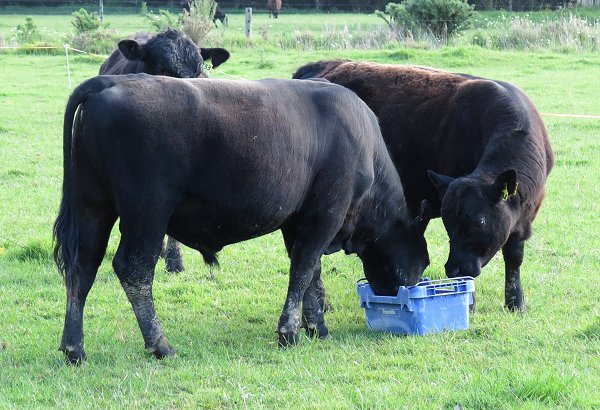 Back in the paddock I took the bulls some Magnesium Oxide in molasses, hoping to settle him down even more before he has to go off on a truck.  I could touch him in the paddock so it's not as though his temperament is wild.

I don't feed the bulls as a rule, not wanting them to associate me with tasty treats which might lead them to rush toward me in anticipation at other times.

The other two in the picture are Imagen's 133 (obscured at rear) and Emergency's 134, the bull I intend using with the heifers this year, since he was easily born to Emergency at her first calving. 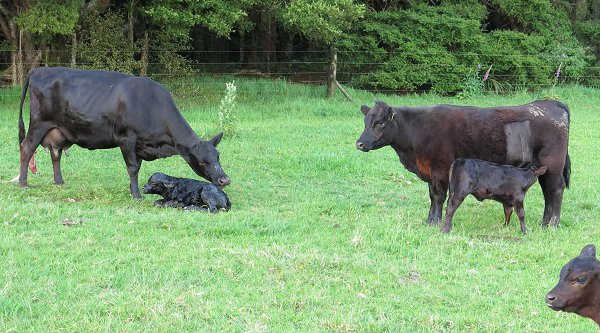 At last Zella calved, on day 283 of gestation (she's always gone to 283 or 284 days).  Another bull calf, which is convenient, since I don't at this stage want a daughter from her and steers sell for more.  This is the calf conceived when Stephan was lying around in hospital because of his toe.

I saw the first sign of a membrane bag four minutes before the calf was on the ground! 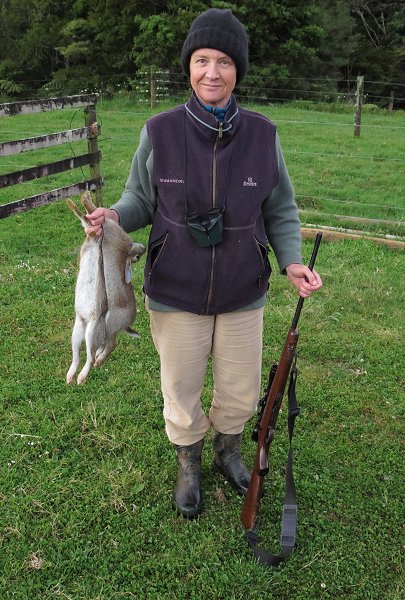 Stephan was worried he had no bait for trapping and so we drove out across the farm in the ute - rabbits don't run away from a vehicle as much as they do from a person on foot - and I shot one out of the window and another by sneaking across the Windmill Paddock and popping off the black rabbit's companion as they browsed.  I haven't shot anything for years, after a very distressing experience, but I'm still an excellent shot.

Back at home I went up to where the sheep usually live and as I was walking quietly to where I knew I'd see rabbits, looked up and realised that within about ten metres there was an orange cat, sitting up on its haunches, watching me ... and the rifle jammed!  By the time I'd got it to load, the cat had gone.  But I did then see a rabbit, so that's three for Stephan's bait bucket for the week.  He was pleased.

Stephan baited the live-capture trap with fresh rabbit, but we didn't catch the cat. 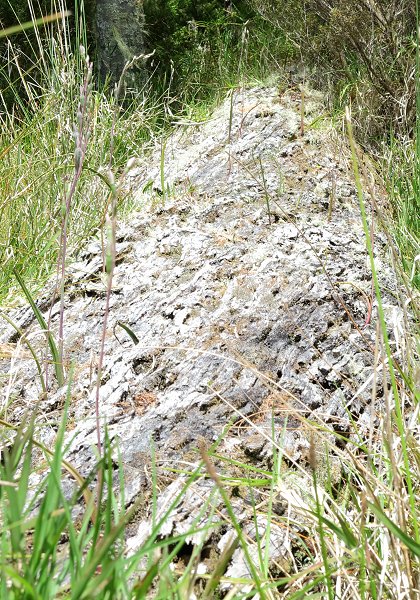 The little sun orchid plants I've previously observed on the big fallen Puriri trunk in the Big Back swamp nearly all have intact flower spikes this year.  It's nice to see them doing so well, now the cattle can't get to them and nibble their flower buds off.  Perhaps out here on this "island" they're relatively safe from Possums as well. 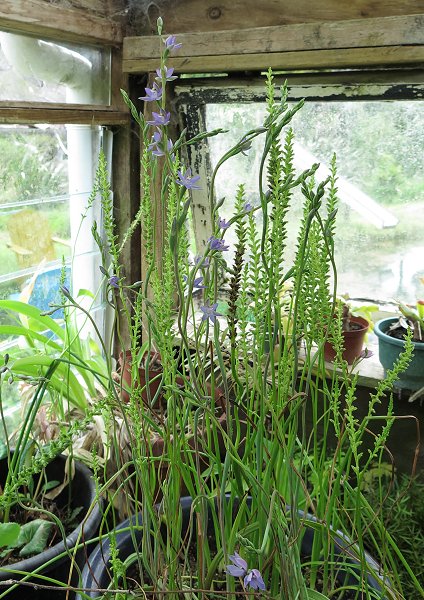 Back in the greenhouse the rescued sun orchids are flowering in the warm air. 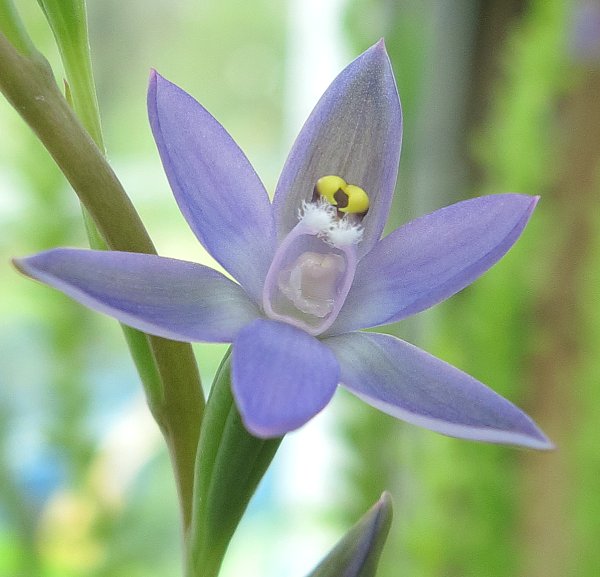 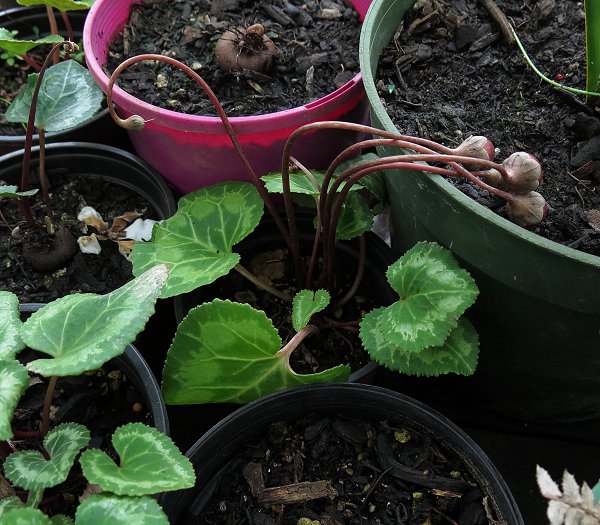 One of the small Cyclamen plants has produced several fertile seed pods.  I collected them together to rest in a neighbouring pot, so that if they open before I notice, their seeds will fall in soil, not all over the shelf, where some will fall through the cracks.  I regularly find tiny plants growing on the damp wooden shelves, from underneath other pots where they've secretly germinated. 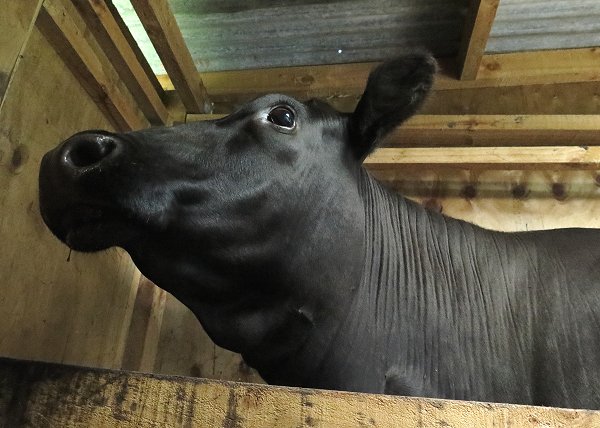 We brought Zella in this evening for her first milking.  I crouched down with her calf to scratch under his belly and keep him quiet, looking up at Zella's slightly alarmed expression as we inflict this process upon her again.

We can't drink her milk for the first eight milkings because of the "dry cow therapy" antibiotic she had at the end of last lactation to treat the mild infection in her udder.  But we'd not drink it anyway because of the colostrum, which tastes pretty weird.  I froze some for emergency use next season.

She also had some blood in her rear quarters, which gradually cleared over the next three days.  It's reasonably common for that to happen at the start and makes the milk a funny colour. 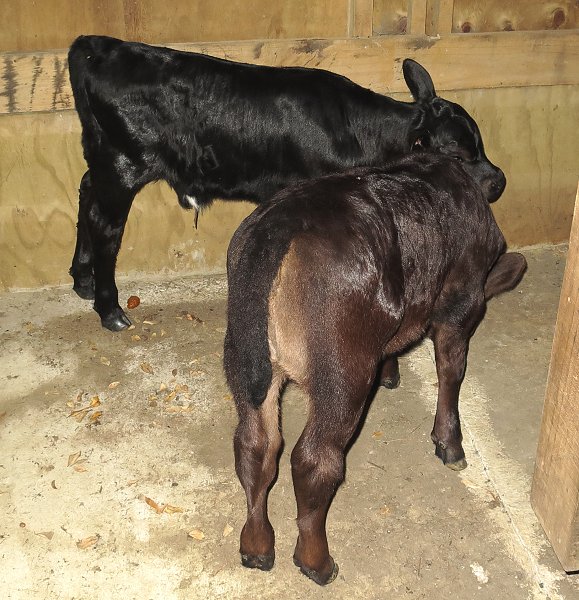 These two are Zella's son and Julia Caesaris.  They're the same height and their feet are the same size.  Julia would have been born about yesterday too, if all had been normal, although she'd not have been this big had she stayed where she should have been. 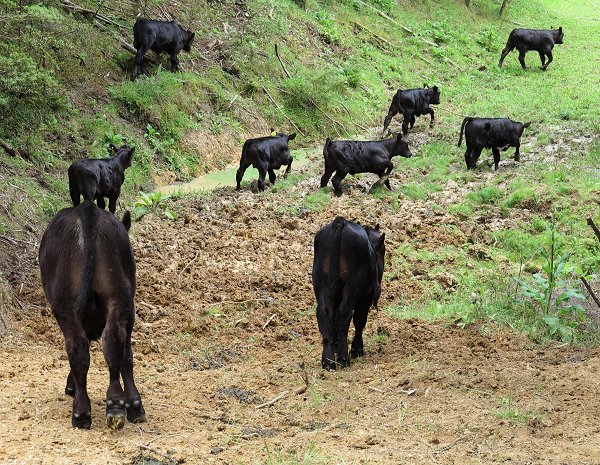 Lots of little calves learning how to negotiate their environment.

I wanted to move the cows and calves out of the Back Barn, so went around behind the calves to ensure they all followed the same path their mothers had taken and would not get stuck in a corner on the wrong side of the stream. 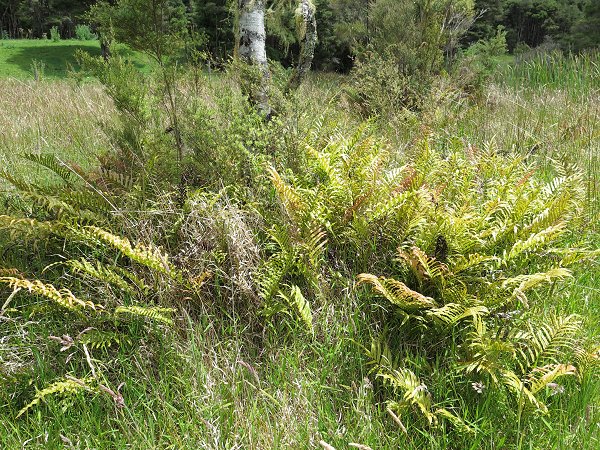 One of the downsides of fencing swampy reserve areas is that the areas where orchids used to grow are now overgrown with other plants.  I wonder if the orchid plants are struggling away in there somewhere? 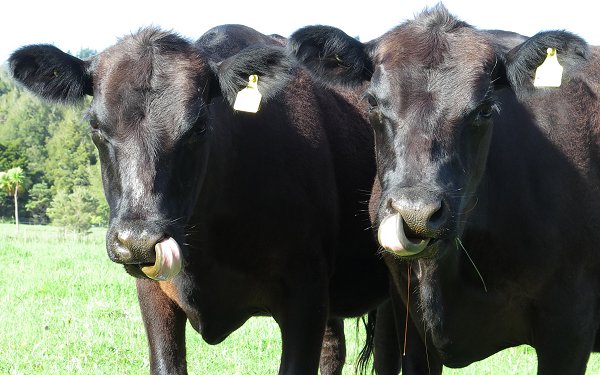 If I'd tagged one of these heifers in the opposite ears, they really would look like the mirror twins they are at times like this.

By my calculations, Gem 698 should have calved a couple of days ago; I now suspect she's having a bull calf, whose gestation periods are usually a couple of days longer than that of heifers.  She's looking in lovely condition.  The twins are on their own together until Gem calves.  I thought she was in labour yesterday, but then realised she was stepping back and forth itching her back on a branch hanging over the fence.

Walking across Flat 1 this evening a bird flew up out of the grass in front of me.  Being of a suspicious nature and it being spring, I investigated further and found this tiny nest. 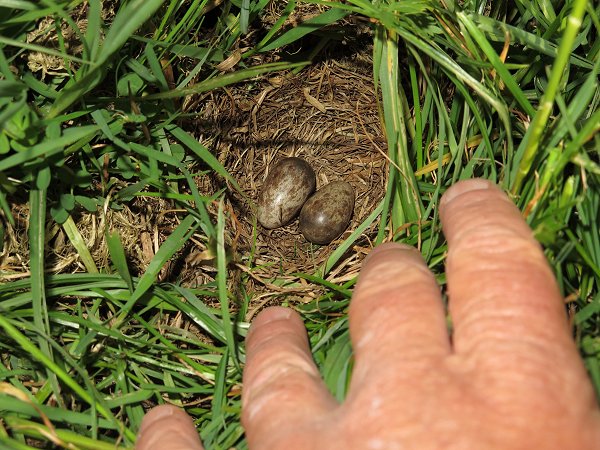 The eggs are very small.  I didn't immediately recognise them, but thought they must be either Skylark or Pipit.  The colours look most like the pictures I can find of Skylark eggs. 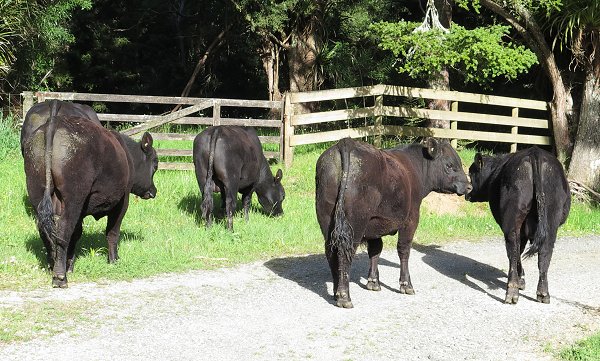 Bull 129 is off tomorrow morning so we took them over the bridge this afternoon.  129 is the smooth-haired animal on the grass in the middle.

When Stephan was milking Zella this morning, we put Imagen's son into the calf pen with Zella's calf so I could pull some of his tail hairs out and send them off for DNA testing.  His sire is Ardrossan Connection X15, so there's a 50% chance the calf will also be a carrier of the AM gene.  I have one straw left of that bull and six more of his double-defect-carrier sire.  I'm using them slowly, not wanting to risk creating a lot of carrier calves all in one year. 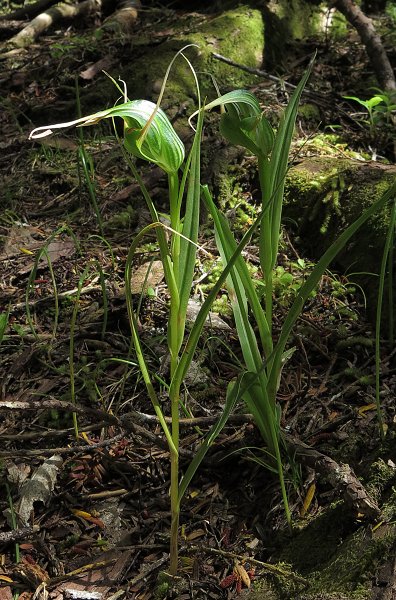 Greenhood orchids are standing to attention all around the slopes in the Back Barn Paddock.  I remain surprised and delighted that they grow there and that they've probably long done so. 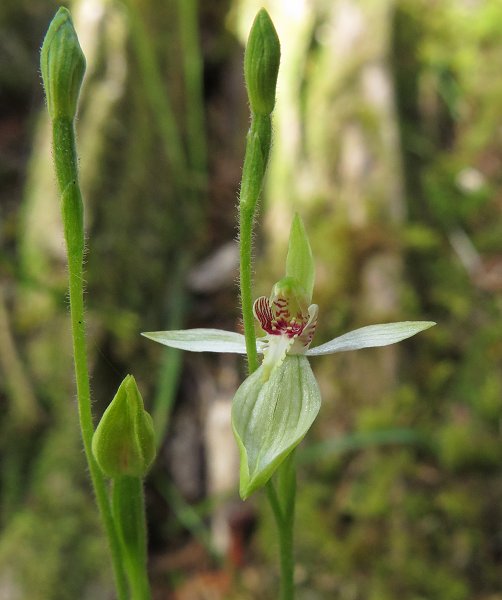 Taking pictures of these tiny flowers and enlarging them on the computer screen is the only way I can currently fully enjoy them - although I also have a marvellous magnifying glass once owned by Stephan's father, its cover with a tiny spyhole in the centre, through which I can look and see their detail with clarity.  I need an ophthalmologist! 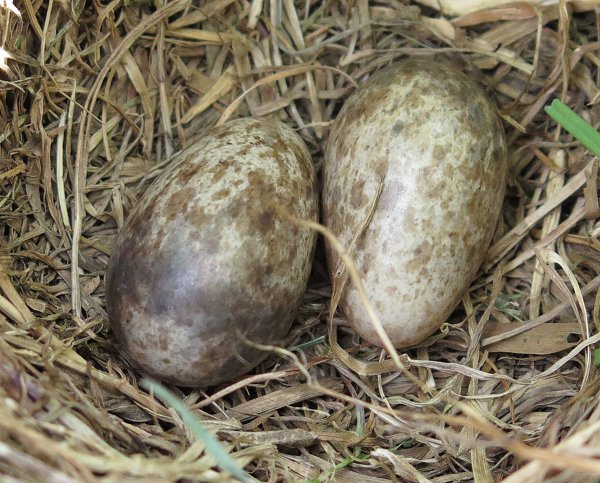 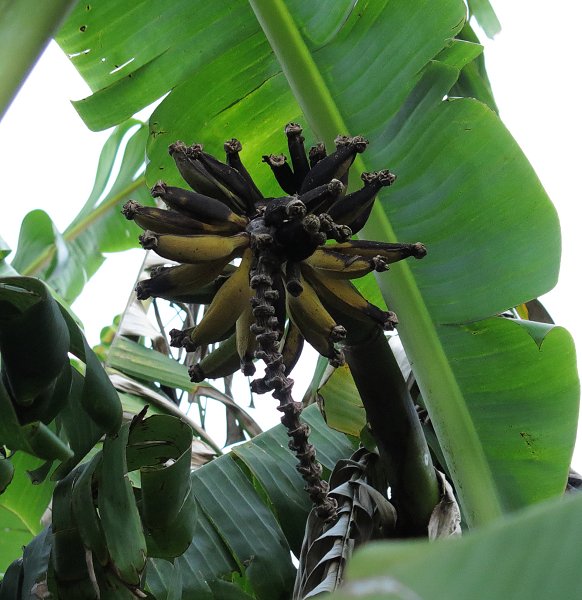 It looks like the bananas are about as ripe as they're going to get and many have gone past it. 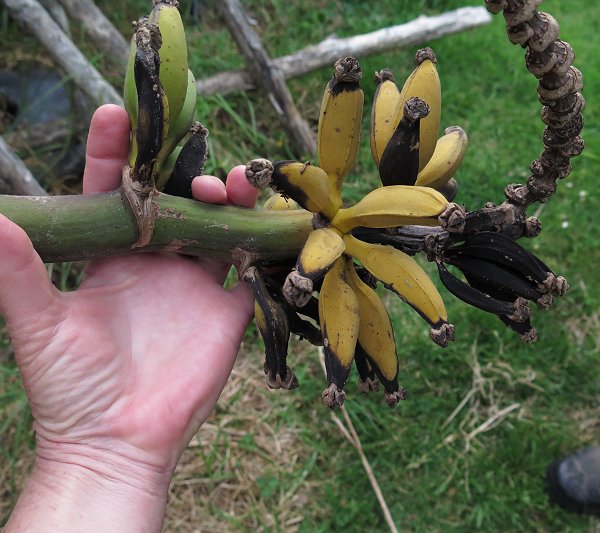 Stephan cut them down and they didn't look much bigger close up. 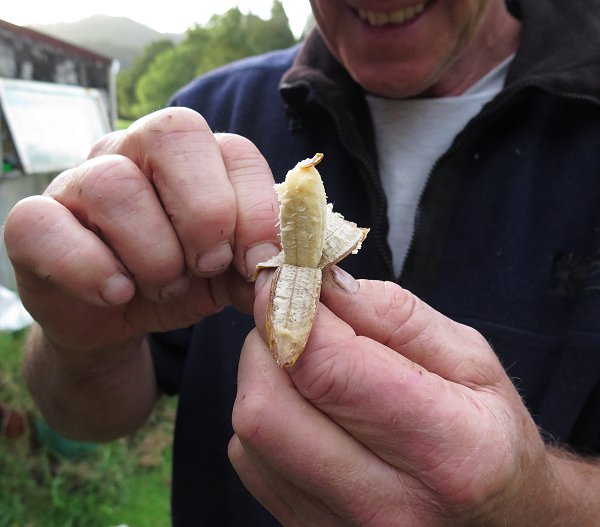 Today I drafted the elder calves' mob, splitting the cows and heifers.  They cows are in very good condition and can tolerate a bit of delay in being shifted from one paddock to the next; the heifers are much more sensitive to running out of feed and as the grass growth has slowed again, I need to prioritise feeding those younger mothers.