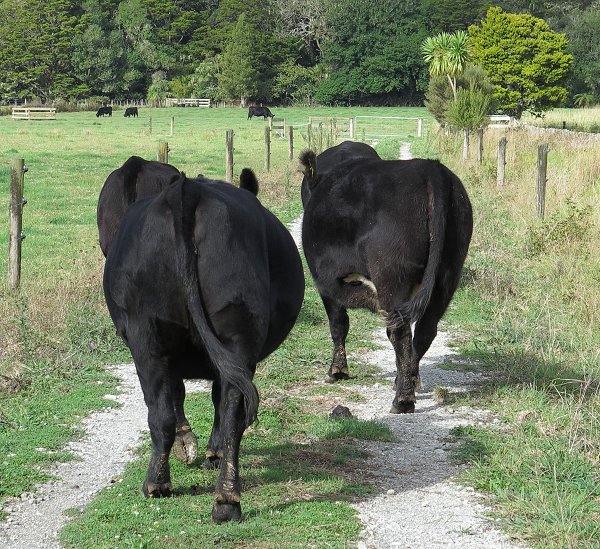 Fat-bottomed Surprise 115 at the back, then 660 with the white belly, little 112 and grumpy bull 96 all came from the Swamp Paddock and into Flat 5a this afternoon.

I thought Surprise might end up in someone's freezer, but she's looking pretty nice, so I've sold her for breeding instead.  112 is on the homekill list, since she's never going to amount to anything useful in terms of breeding.  660 is hanging around with them until I mix her back in with the main mob and the bull's waiting to go to the works. 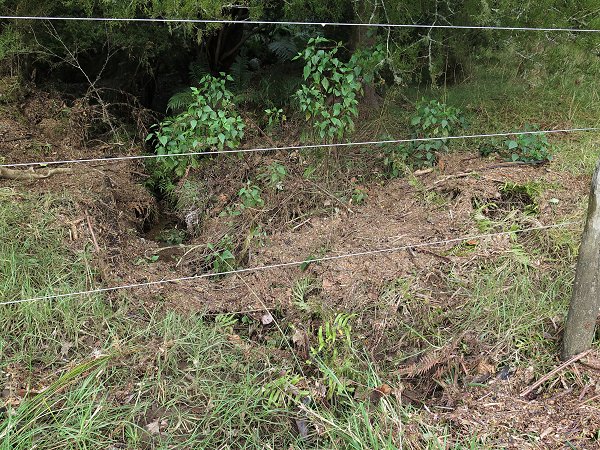 This debris has been deposited in a heap on the downside of the culvert from the big swamp in the Big Back Paddock.  I think it's mostly sawdust from where Graham has been cutting firewood on a slope on the back boundary and for it to have ended up here like this in this amount, the rain and run-off must have been extreme.

A party of eight of us went up into the bush to repair the water line today, it having been disrupted by the sudden flood on Friday.  Usually Stephan does these fix-it jobs.  I can do it, but like many of the other tasks I've had to assume over the last three months, it's harder with a smaller physique and William was quite sure I shouldn't be off doing it alone, bearing in mind the treacherous nature of the track and the fact that if something did go wrong, Stephan couldn't come up and find me.

We went out in and on the ute and as soon as we got to the Back Barn paddock, a steady rain began to fall.  Everyone else looked quite cosy in their wet-weather gear, but I don't actually own any!  I can usually arrange my outings between showers, or take an umbrella; but not in thick bush.

Despite the wet and the increasingly penetrating chill, it was a fun walk, with Simon, Anna, Karl, Kerehoma, Miriam, Dylan, William and me.

Late in the evening, just as I was heading for bed, I heard the repeated mournful calling of a lost calf - or one which had lost his mother.  They don't usually call like that at this stage of their lives, so I wondered if there was something amiss and decided it would be best to go and check.  So at 11.30 I was out in the Camp Paddock looking for bull calves and their mothers.  129 must have mislaid Emma 93, but I couldn't find either of them and all was quiet again, so she must have been at the top of the hill ignoring his calls and by then he'd managed to find her. 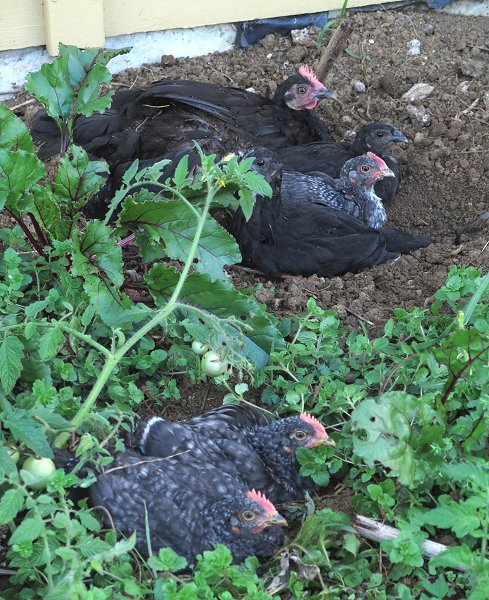 Whenever I let them out in the late afternoon, the little chicken family make themselves comfortable in the garden.

I went walking, found all the bull calves and their mothers.  In the big mob I discovered heifer 728 with a mucky rear and a bit of membrane hanging from her vulva: I think she was pregnant and she isn't any more.  I also think she got in calf early in the season and then was on heat towards the end, so this might be a repeated inability to remain pregnant.  It's a shame, since she's the daughter I was keeping to replace her mother, 548, on her way to the works soon.  Once I would have allowed another chance, but I'm learning that being "soft" in that way only leads to disappointment again later.

We took both cats to the vet this morning.  Finan brought a mouse in to the house on Saturday morning and when he'd eaten it, there was green paste on the floor: rat poison!  A small mouse couldn't have had very much bait in its stomach if that much had been squeezed out, but I looked up the toxin and then rang the vet for advice.  Later Finan vomited up most of the mouse, so he would probably be alright, but in consultation with the vet today we felt it would be sensible to give him K1 treatment every second day for the next three weeks.  I took him to town because on the phone the vet had said he'd need a blood test; but the K1 treatment was far less expensive, so we went with a prophylactic approach.

Foxton had a general examination and a blood test, to see why she's lost so much weight recently.  I can't remember how old she is - it was 1997 or 1998 when I went to Foxton Beach and brought her home with me, so she's at least 16.  She used to look a bit sore in her back legs, but now she's lost weight, she's taken to jumping up on benches and tables.

The blood test subsequently showed she is suffering hyperthyroidism and requires either daily medication or a special diet.  As she's a really difficult cat to pill, we opted for the special food, which is very low in iodine and we'll see how she gets on. 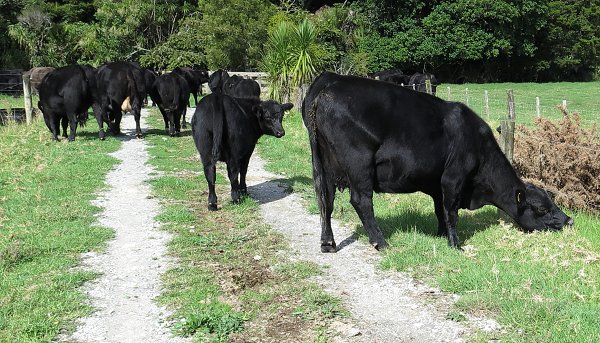 In the afternoon I brought the big mob in to weigh the calves, ready for weaning.

All of Abigail's family have that habit of extending their necks under the electric fences to reach grass for which the others won't dare to reach.

The calf growth-rates are down a little on most years, because of the long dry spell.  The cows have not had as much to eat as I would have liked to have provided over the last few weeks.  In the good years, they do an average of 1.2kg/day on each calf; this year that's down to 1.1kg/day, which equates to about 20kg for each calf.  But the weights are still pretty respectable; the better heifers are 230-260kg and the best steers are 275-300kg (actual weights today, not adjusted to 200 days). 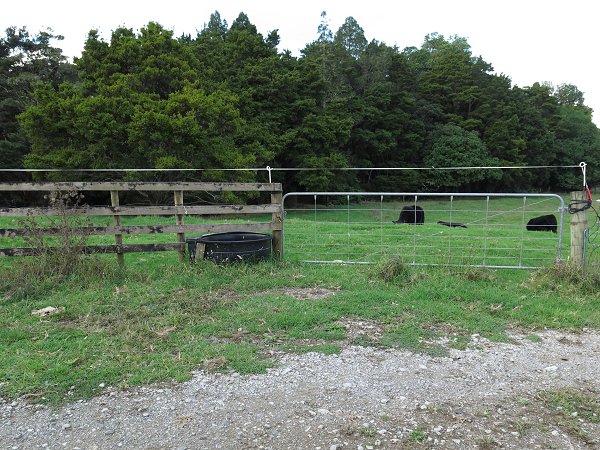 I used to draft back at the yards, then run the cows and calves separately out to the paddocks, but it was hard work getting them to leave each other; it's much easier to have them walk up the lane, then draft the cows out the top into their paddock (the cows will easily come past me through a partially-open gate) and then put the calves where I want them and it takes them a while to realise they've been separated.

As usual I weaned with the calves in the House Paddock and the cows in the Windmill, with the gates open for them to come back to the House gate where there are rails and water.  I don't think any of them would jump, but sometimes one will and I'd prefer to prevent temptation, so I strung a hot tape across the top of the area. 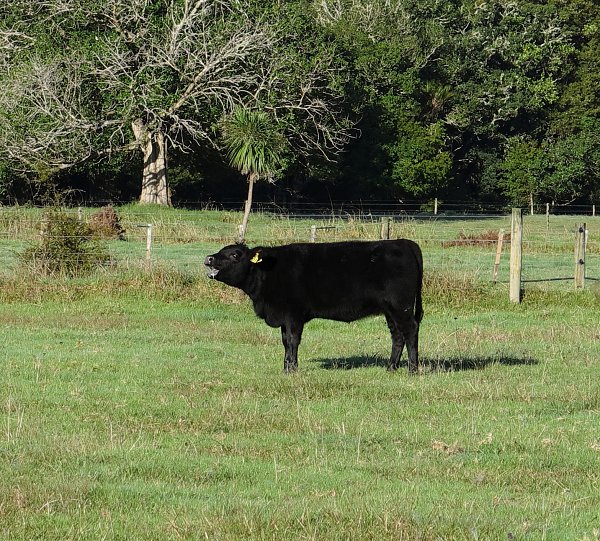 Poor baby.  This first lot of calves have actually been much quieter than usual so far.  The calves tend to do most of their yelling at the other end of the paddock, away from the house, but as Zella and Imagen walked up the lane, they came to yell at them - any mother in a crisis? 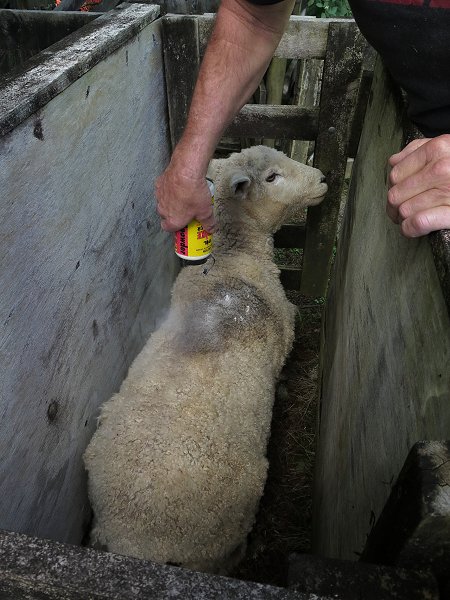 Stephan spotted one of the sheep off on her own and that she had flies for company.  It's the same little sickie ewe we drenched several weeks ago and while she has picked up a lot since shearing, she's still not entirely right.

The powder is one which has, I understand, now been withdrawn from the market, containing a hazardous organophosphate.  I've stayed away from it as much as possible for years, but Stephan is of a robust nature when it comes to chemical exposure ... so far.  It's extremely effective and we're using the last of it sparingly.

Stephan is moving around a bit more now, although still spends most of the day with his foot up, since it continues to swell if he has it down for too long.  But he's so fed up with inactivity!

There are a few pictures of his toe available here, from the time of the injury until now.  But remember that it was a major almost-amputation, so don't look if you're eating or squeamish. 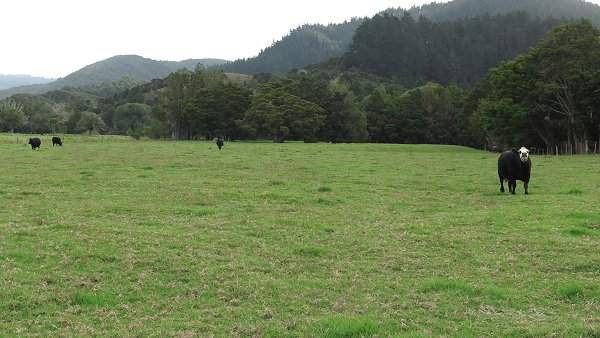 I went out to check on the cows and as I was shutting the lane gates so I could come and go conveniently, the cows spotted me and ran across the paddock in hopeful anticipation that I'd realised I'd made a mistake in closing the gates between them and their calves.  I always feel so mean. 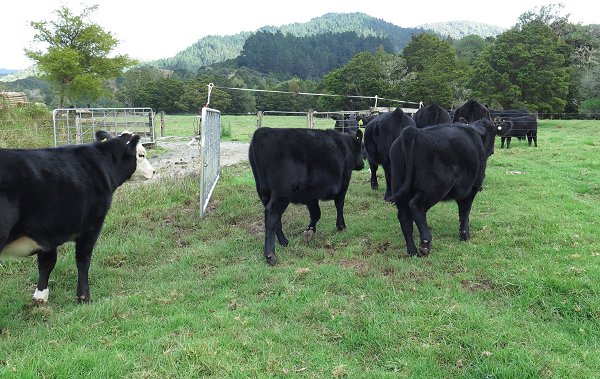 The calves having settled so quickly, I moved their mothers along to Flat 4 and then the calves to Flat 3, so they can continue to be near each other, but with only an electric fence between them, i.e. no more touching.

Then I brought the next lot in to replace them and begin the process again.

Doing it this way means that the mooing and upset goes on over about three weeks, rather than only a few days, but because it's a vastly less stressful process than doing them all together, I still prefer it.  The chaos of weaning in 2009 put me off large-group weaning for life!