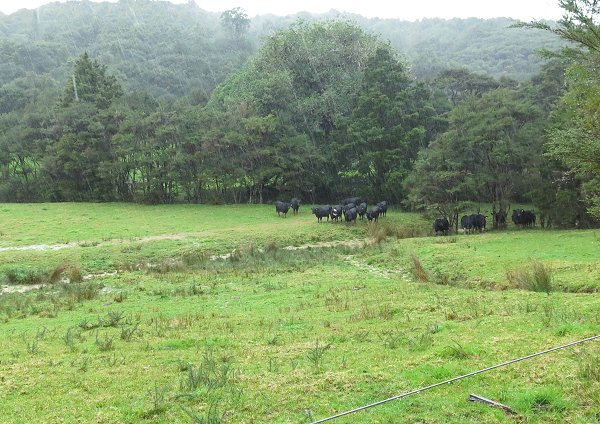 Ella and I took our umbrellas and went for a walk out to move the pregnant heifers who were all standing around looking a bit miserable, with water flowing through their paddock. 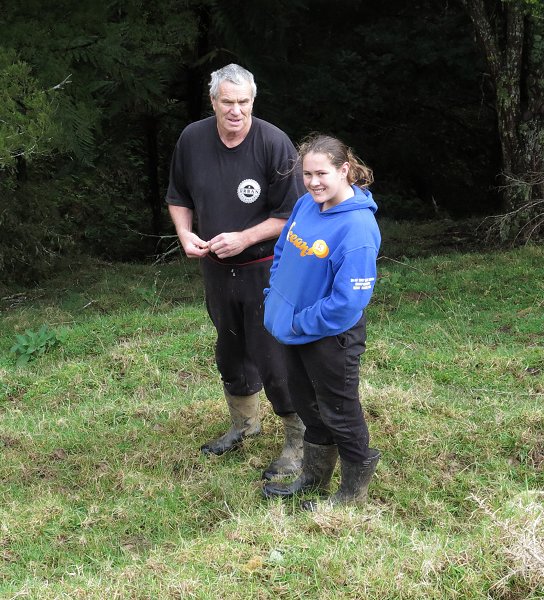 Ella and Stephan came for a walk with me up the hill Over the Road to check on the cows.  Of course it started raining when we reached the top of the hill.

We came down just after cousin Christina and Emma had driven in our gateway.  They spent the afternoon with us, just chatting while Christina showed me some things to do on my ipad which won't do me any good at all.  Silly "apps" which are quite fascinating to play with and could waste tremendous amounts of time.  It is primarily a work tool. 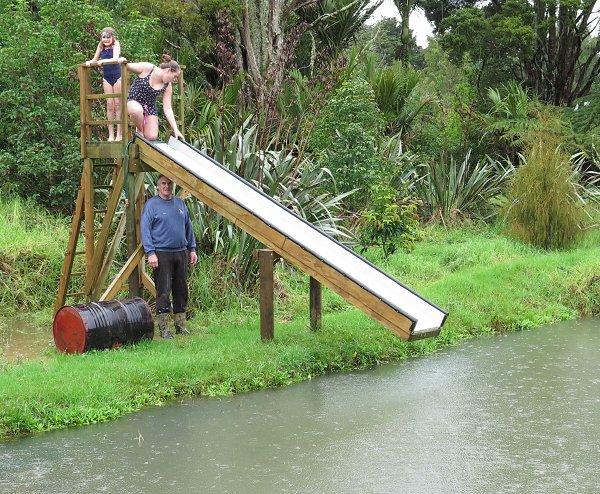 Emma and Ella both wanted to swim in the rain.  Stephan stayed dry under the slide.

There was a lot of screaming and chickening out before they both slid and swam across the pond several times.  The children always have a ball, no matter the temperature. 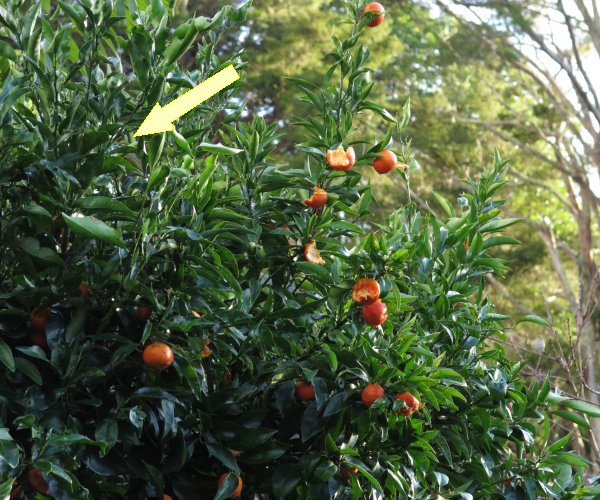 Our mandarins are being eaten!  The tiny Waxeyes (Tauhou, white-eye or silver-eye, Zosterops lateralis) have been flocking to the tree in the early mornings for the last week or so.

If you look very closely at the photo, you may be able to see one white-ringed eye amongst the leaves. 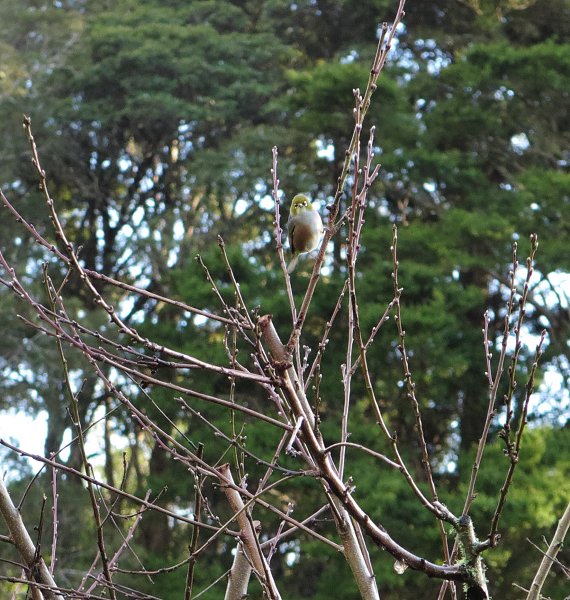 A few others perched in the Peach tree's bare branches watching me, before flying off.

That tree fruited very well this season and we've enjoyed eating as many of the Mandarins as we could.  Before setting out on any walk to see the cattle, I'd always load my pockets with at least half a dozen fruit to eat along the way and the tracks were littered with little bits of orange skin.  I thought the cattle might eat the skin, but they didn't seem very keen. 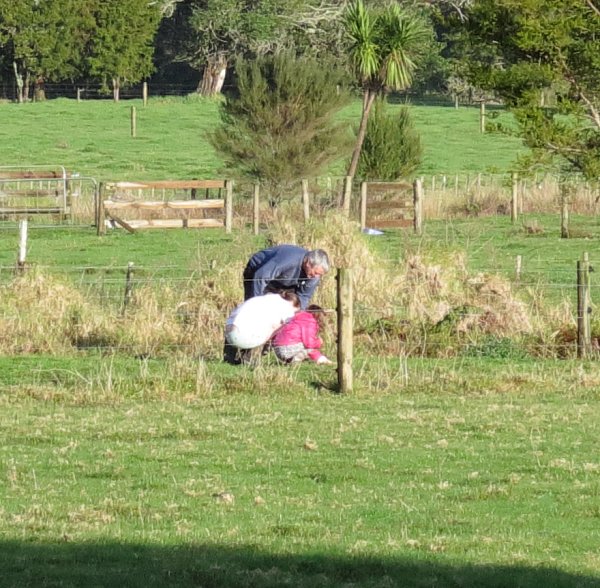 Emma decided she'd really like to stay last night, and since her school has a teacher-only day today, her mother was happy to leave her behind with Ella, her new-found first-cousin-once-removed.

I watched the three of them bringing Zella and Imagen down the lane this morning, until they all stopped to look at something Emma had found on the track.  A worm.  While they're very common, they are pretty fascinating to watch, if you really look.

In the afternoon Stephan took the girls to town and collected a freezer from someone who'd decided to buy a new one and didn't want their old one any more, despite it still being in clean and tidy working order.  It proved to be of ideal size for our current milk-freezing project, with which we were beginning to have difficulty, since there's quite a lot of beef and pork in our current freezers and not much room for all these blocks of frozen milk we're now producing.  The plan is to have enough milk frozen so that we don't have to buy any "Fonterrible" milk at all before Zella calves and begins milking again.

I took a sample of Zella's milk in to the vet this morning, to be sent to a laboratory for culture and somatic cell counting to see if Zella has a sub-clinical infection.  I suspect she may, because the straining muslin cloth becomes slimy when I add soap or detergent to wash it each morning.  A home mastitis test involves the addition of a dilute detergent mix to a small amount of milk to see whether or not the milk clots into slimy masses (I documented this test a couple of years ago with obvious results) and a slimy cloth indicates the presence of those cells, although the milk test didn't show any strong result.  Stephan has been tested and is a Staphylococcus aureus carrier, which is probably the bacteria which has infected Zella, perhaps when Stephan was more actively infected during part of his toe recovery process?

Ella and I went knitting at the Intermediate School while Stephan went to the gym for a while. 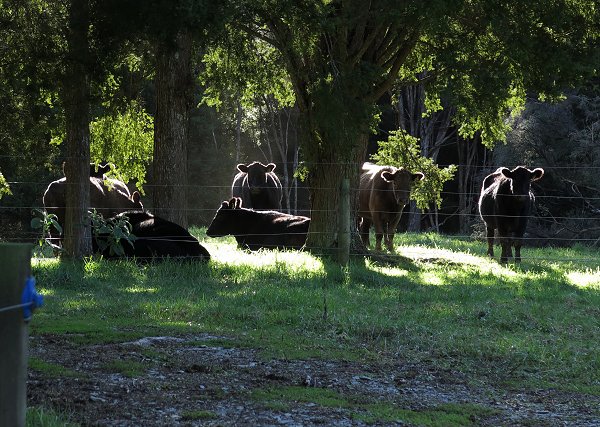 The pregnant (mostly) heifers, sitting and standing happily in the warm sunshine, out in the Back Barn Paddock.

I'd walked out to check them while Stephan and Ella walked all along the Northern boundary to ensure no trees had fallen down over the fences in the big storm.  Stephan also serviced a number of traps, which he hasn't seen for the last six months. 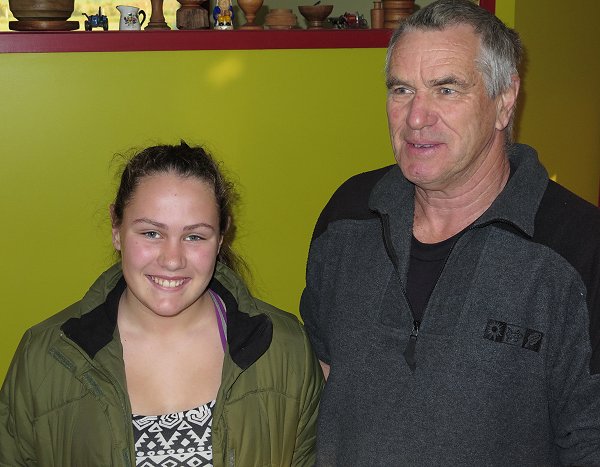 Time for the portrait of daughter and Dad, before Ella catches a plane home again.  Stephan took her up to the airport and I waved from the house - as if she'd have known where to look if she could see me. 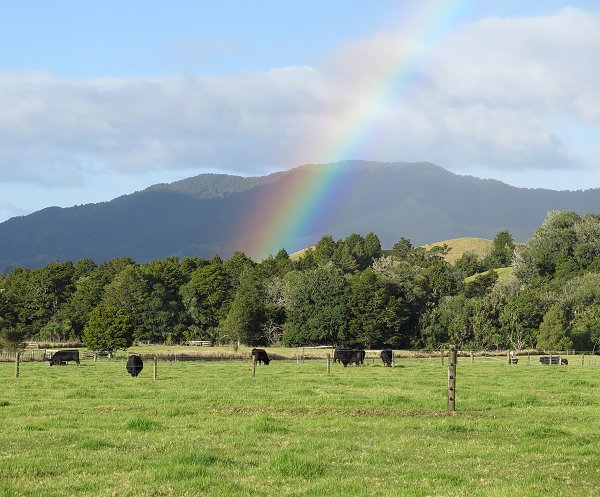 A rainbow.  We've been looking for the pots of gold, but they must be buried quite deep.

I think the real gold is that often both ends can be seen on the land where we live and work, that we have so much lovely space to call our own.

Stephan went to do a trial half-day at Whakaangi Landcare today, to see how well he can walk for long distances over his usual trapping terrain.  He came back feeling pretty good, although pain in the evenings following any exertion looks like being an ongoing problem.

I've begun to see the kicking of calves inside my cows!  It's always fun when they start livening up in a way which is visible from the outside.

I put the yearling heifers in to the Bush Flat today and they galloped up to the end of the flat and back again, splashing all the way - if you look closely, you'll see splashes coming up from several of their feet as they're running.  It's a very wet area sometimes in winter, something we're trying to address with a combination of drains along the base of the Small Hill from which water flows down onto this flat area and by improving the fertility and structure of the soil, which seems to be improving things elsewhere on the farm. 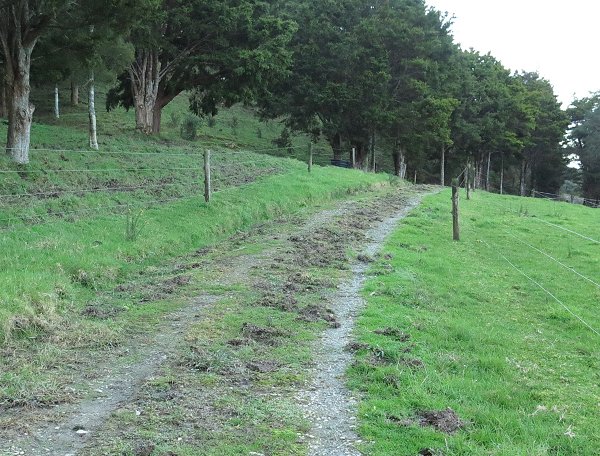 I can't imagine what they're after, but pigs have been rooting along the centre of the track between the PW and Frog paddocks.  Stephan sprayed the tracks a few weeks ago, so most of the plants are dying or dead, but something here must be attracting them.  There's no rooting in the Frog Paddock to the right, although they've been doing some at the base of the PW where the ground is already a bit churned up by cattle hooves.

Stephan, having gone out yesterday feeling a bit off-colour, now has a horrible cold.  Just when he started to feel good enough to really get on with some work, he's felled again, this time by a tiny virus.  He is not happy!