The week beginning the 1st of February 2014.
Saturday the 1st 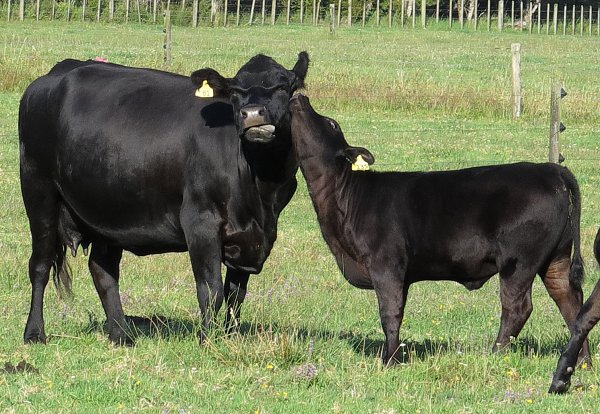 I've been taking more "for the file" photos of the cattle, since it's obvious any of them might die at any moment.

Here are Eva and her daughter, in the midst of an affectionate licking session.

I've only received one name suggestion for the calf: "How about Deva for 135, as in "daughter of Eva", and a variation on "diva"."  I think I quite like it, thanks Jachin. 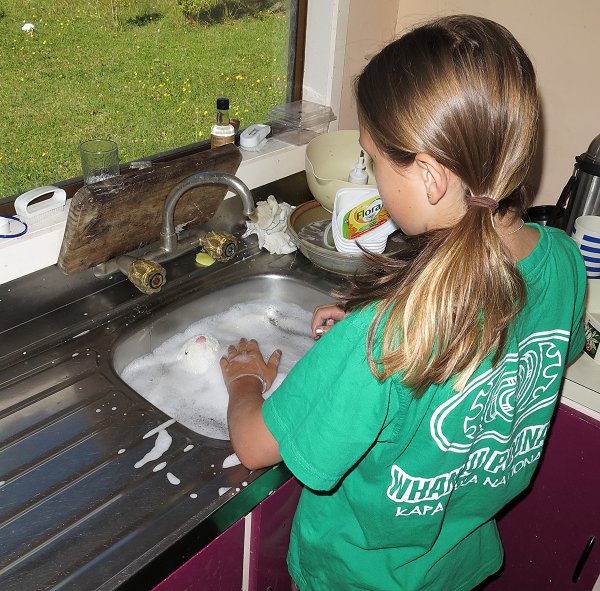 Stella asked if she could please wash her rather grey-looking toy rabbit, which used to be white.  I found her some liquid wool-wash soap and left her to attend to her rabbit without drowning it - little pink nose up out of the suds.  Then we gave her a fast merry-go-round ride in the washing machine to spin the water out of her insides and she sun-bathed on the deck for the rest of the day to dry out. 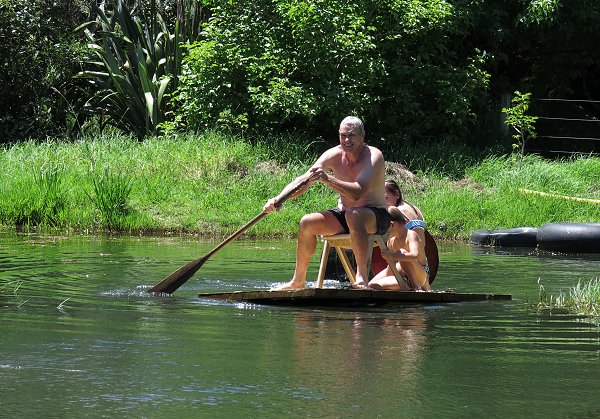 More swimming and playing in the pond.  I stay out until the air temperature gets to 25°C.  It's not there yet this summer. 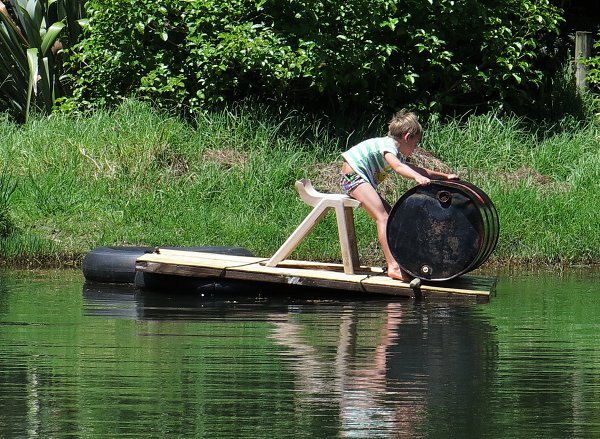 The two children had previously hauled this drum along to the jetty to see if they could manage to float on it, but the brisk and continual breeze blew it away to the end of the pond between swimming times.  I watched in fascination as Louie paddled his way down there and worked out how to get the drum onto the raft and then how to make it stay there.  He gave it three goes before he got the combination right.  The first time, nothing to stop it rolling off; the second, used the long oar to keep it from rolling off, but then couldn't paddle the raft; third try, short paddle to stop the drum rolling off ... 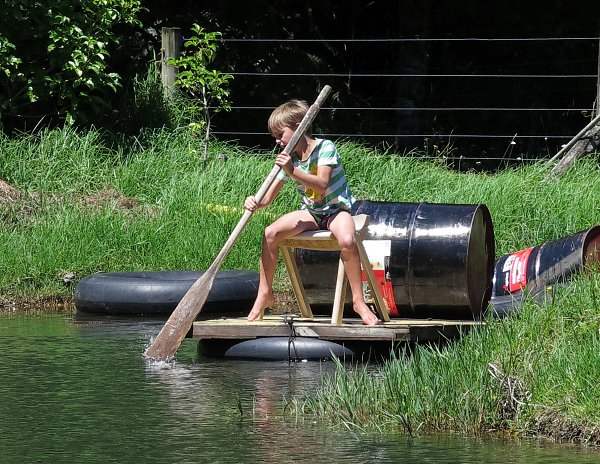 Attempting to float on a big drum looks pretty pointless, because as soon as you get on, you slide or roll off, but that doesn't stop everyone who tries it trying it again and again.  Stella managed a couple of seconds on top after several attempts, but ran out of time to perfect her technique.

The children went home on the bus this morning; the end of another summer holiday for them as school starts tomorrow for one and a few days later for the other.

The new fence is now wired up, the rails and gate are in place and Stephan erected a temporary three-strand electric tape barrier to block the gap between the new position of the gate and the next bit of old fence. 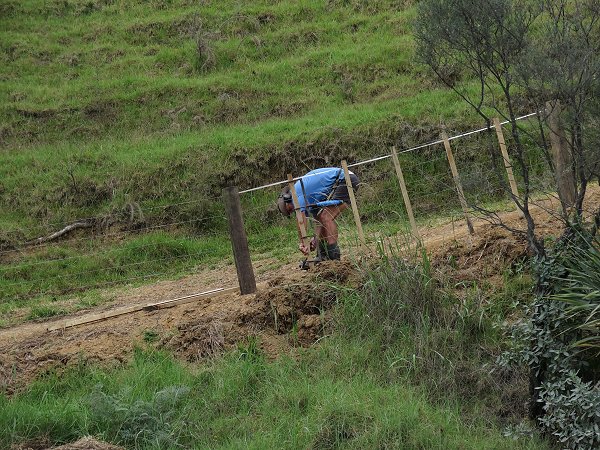 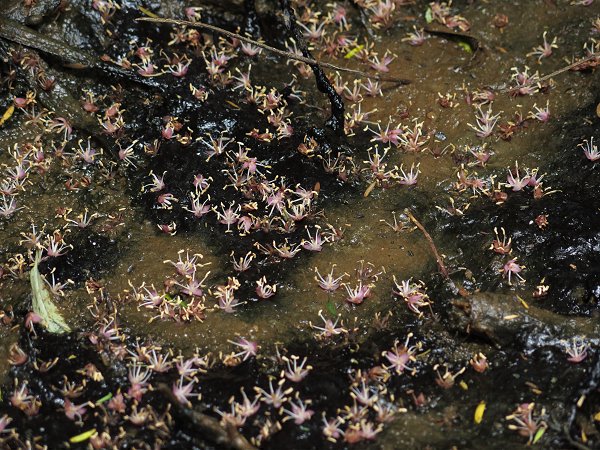 Out ragworting, I found this patch of mud with some very pretty decoration: Nikau Palm flowers which, being heavier at their base, had all fallen bottom-first into the mud. 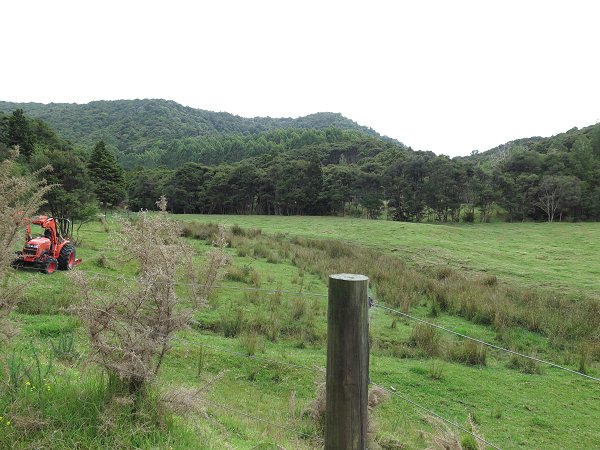 Stephan went out to mow the Swamp Paddock for the first time.  There were lots of rushes and a bit of gorse and when he'd finished, it all looked lovely. 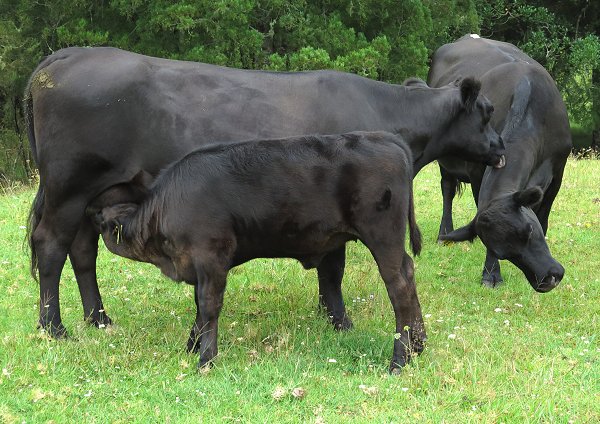 Eva does this to me, too, presenting bits of herself for attention, although I scratch her with my fingers or brush her with the curry-comb.  Imagine licking a cow!

Licking her on this occasion was Dexie 101.

We got up really early this morning (early for us on a morning we don't have to go anywhere else) and at 6:35 inseminated, for the second time, Dexie 121 who was on heat late yesterday.  I hope that one works!

Later on we went over the road together to have a look at the next stage of the fence, since it could involve various changes to the present fence's line.  On the hillside near the big reshaped road corner, the slope is steep and there are a couple of Puriri and lots of big Totara.  Unless we did some really big tree felling, the slope is never going to grow any grass because of the low light caused by the tree canopy, so we decided it would be sensible to fence above it, leaving the ancient fence where it is along the bank above the road, thereby creating a mini reserve area.

Stephan went back over with a different set of gear than he'd intended - he was going to start stripping the old fence - to do some pruning of some of the Totara trees whose branches extend out to where the new fence will be built.

I was at home, quietly writing a weekly update and the phone rang once sometime just before noon.  I picked it up and carried it with me around the house, thinking whomever that was would probably call back, which they did but it was Stephan!  For some reason, probably because he was "just out there" he'd not taken his radio with him to call me if he needed to and was calling from the phone in the shed by the yards.  As I dealt with my slight confusion over this odd call he uttered those words I've heard too often before: "I've had an accident."

He said he'd cut a big branch which had fallen in a way he hadn't anticipated and hit his foot.  His boot was alright, but he thought he'd better take it off and check how much bruising there might be to his foot inside - he was wearing chainsaw-chaps and all the other gear except for steel-cap boots, which he hadn't put on partly because he was only intending doing a little chest-height pruning and one of the steel caps has fallen off anyway.  He pulled his foot free of the boot and saw that his big toe was almost entirely severed from his foot at its middle joint.  He said he yelled out to try and attract the attention of the neighbour who'd earlier been working in his garden, but when there was no response, he made his way down the hill, carrying the boot, the chainsaw (said he didn't want to lose that as well as his toe), got the ute keys to open the shed and called me.  We had a very short conversation about whether this was an ambulance job or a quick trip to town and decided on the latter.

Hearing about a chopped-off toe, I immediately thought ice would be a good idea, grabbed a towel, a couple of ice-packs, my mobile phone and ran, ran, ran out to the front gate, put all the work gear in the shed and drove to the hospital.

Because it was Waitangi Day, a public holiday, not all the usual staff were available and the radiologist had to be paged and called in.  We had called ahead as we were driving in, to indicate that the injury was serious enough to require such attention, but maybe hospital staff don't believe everything they hear, perhaps some people talk about severing their toes when they've pulled the nail off; who knows?

While the radiologist was being found and coming back to the hospital, I shot home again to collect some things for Stephan, since he was going to be transferred somewhere, either Whangarei or Auckland, depending on the x-ray when it was done.  I arrived back just as he was being taken to the radiologist.

The x-ray indicated that the toe joint was intact, but that he had shattered the end bone in his toe.  The fact that it had been severed, even inside his boot, indicated the extreme force with which it had been hit!  There was some talk of getting him transferred by helicopter, but eventually the doctors concluded that there was still enough blood supply working to make surgery slightly less time-sensitive and besides, the weather was pretty blustery for flying. 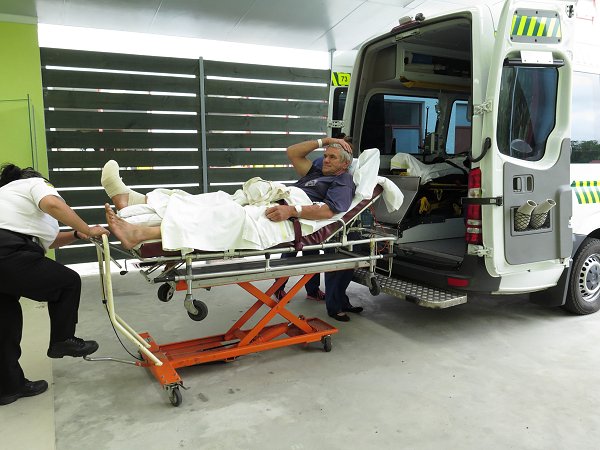 After some judicious bandaging (and I have a vague recollection there was some temporary stitching done to stop the toe flopping around), Stephan was loaded into an ambulance and driven two hours to Whangarei Hospital.

I didn't see him again for three days.  One of the problems with living in a rural area when health services have been "centralised" away from where you live, is that when something goes wrong, you can be completely separated from your family.  In our case my inability to follow Stephan and be present to support him through the ensuing process was because there's nobody else here to look after the farm; for many other people from this area, the barriers are far more basic: no car, no money for petrol.  Mind you, with an extended period facing us without Stephan's usual income from trapping, and the tractor payments still going out every month, our position doesn't feel particularly flush either. 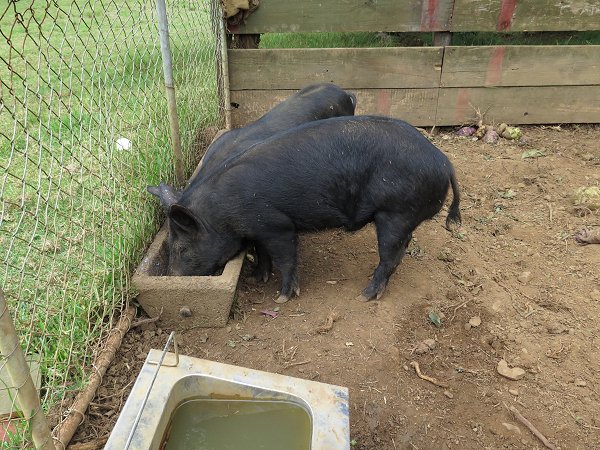 As Stephan's ambulance drove out from the hospital, I turned in the other direction and went out to see Elizabeth and William, who gave me coffee and sympathy and pig scraps.

I continued to carry my camera everywhere around my middle, but didn't seem to have time for my usual reflections or observation of my surroundings!

Everything went well, beginning with milking Zella and Imagen, even though I take three times as long to milk Zella as Stephan would.  I didn't hear anything from Stephan until late morning, when he left a very odd-sounding message on the phone to say he was out of surgery safely and all was well.

Meanwhile various plans made before yesterday continued, including the arrival of four lovely women from the Women's Studies Association, to which I have long belonged.  The website needs a revamp and as I'll be doing that, we decided a face-to-face meeting to discuss and decide on the changes would be a good idea.

Stephan had the weekend's catering all planned and was looking forward to meeting more of my circle of friends and acquaintance, since they're uniformly lovely people.  When the women arrived I told them there'd been a bit of a glitch with my butler, chef, pool-boy, gardener, milk-maid and general help all having gone off for a holiday at a multi-level resort run by the Northland District Health Board, so their accommodation arrangements had changed to self-catering.  The four of them took over the kitchen in the evening and produced a lovely meal for us all.