The week beginning the 1st of March 2014.
Saturday the 1st 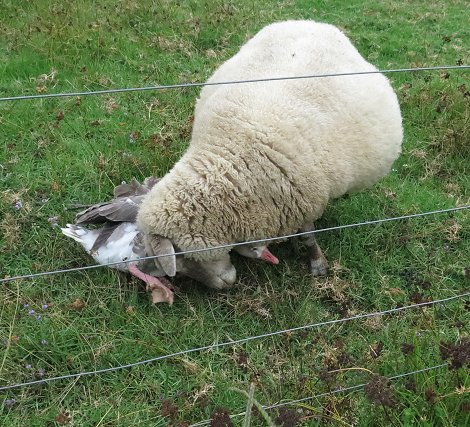 When the goose sees me going to feed the chickens she comes honking across the House Paddock, hoping for some maize.  I gave her some this evening but unfortunately for her, Dotty had also noticed what was going on and came to eat the maize.  There was a fight, which Dotty won, knocking the goose over and shoving her out of the way!  Size is everything.

Yesterday when I re-dressed Stephan's toe, it smelt a bit funny, but I didn't immediately identify the smell as one of infection.  Today I became rather more worried, with parts of the wound more weepy than they were and the smell having become more pungent, so in the afternoon we went back to the Hospital.  I'm never sure what one is supposed to do in such situations, but anticipating that he'd need antibiotics quite quickly, I figured the emergency clinic at the hospital was the best place.  The doctor there phoned the orthopaedic surgeons in Whangarei who said put him straight back on IV antibiotics, so he was admitted for the night into the general ward. 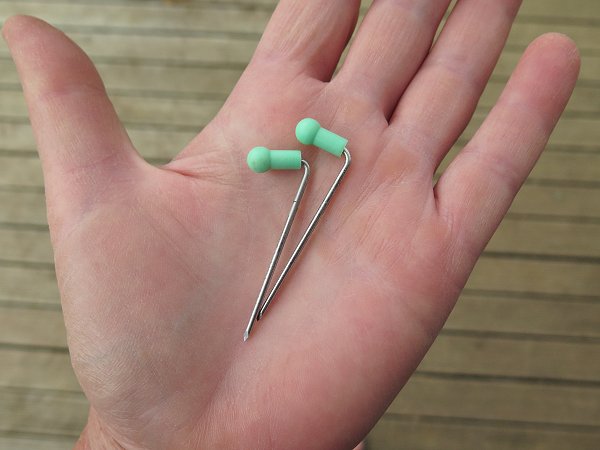 We had a scheduled outpatients appointment this afternoon, so I went to the hospital and took Stephan from the ward and along the corridor to see the surgeon.  Both pins were loose and swivelling in Stephan's toe so he decided they'd be better out than in, particularly considering the presence of the infection in the wound, which increased the risk of infection directly into the bone via the pins.  Naturally I asked to have them.

Leaving Stephan back in the ward for another dose of IV drugs, I headed home, but was summoned back again a couple of minutes later by a text, to find that they'd decided he could now go home with oral antibiotics for a couple of weeks. 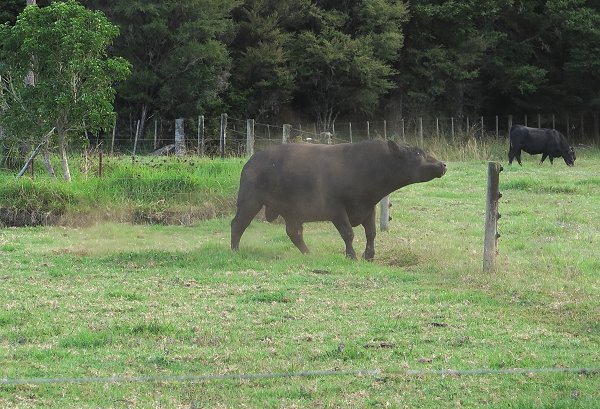 I drafted the elder bull, 87, out of his mob and into one of the Mushroom paddocks and bull 96 got very excited about seeing him a paddock away, growling and kicking up a dust storm. 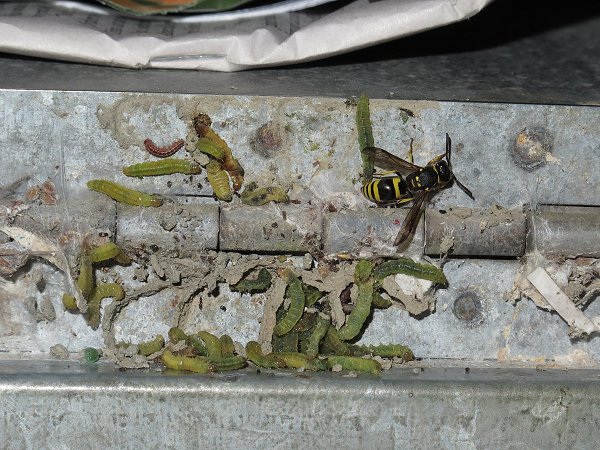 This little predatory wasp appears to have created a mud-cell nest in the hinge gap of the mail box.  It is a Solitary Wasp (Ancistrocerus gazella).  This one will remain solitary if it doesn't find a more sensible place to lay its eggs.

I am pleased to find no Monarch caterpillars amongst its prey here. 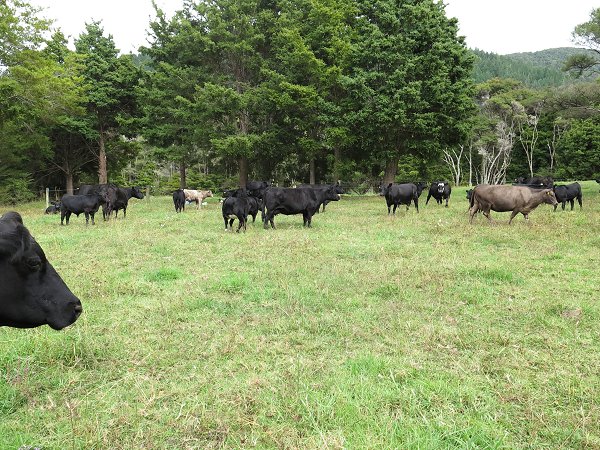 The pastures are all starting to look like this: dry.  We've had no decent amount of rain for about four weeks and then it was only 20mm, which doesn't go far when conditions are already dry. 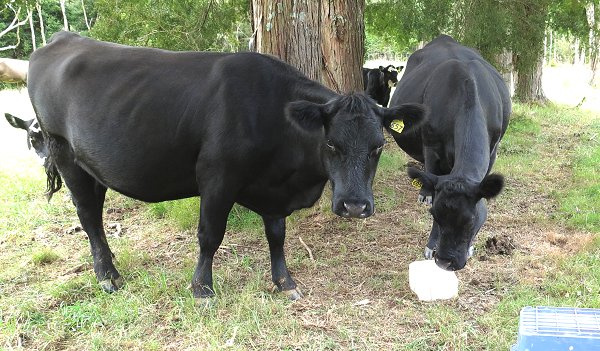 657 and her mother, 605.  I had hopes this youngster would be a good cow, but she's not particularly.  She'd pass in most herds, but her (second) calf isn't particularly impressive and she ought to have the genetics to do a better job.  She's currently on the cull list, as is her mother because of her terrible udder. 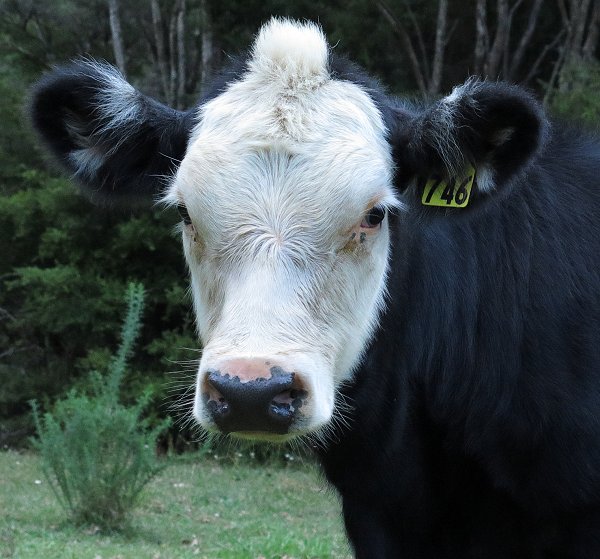 What a funny hair-do.  The rest of her is in the photo at the bottom of this page. 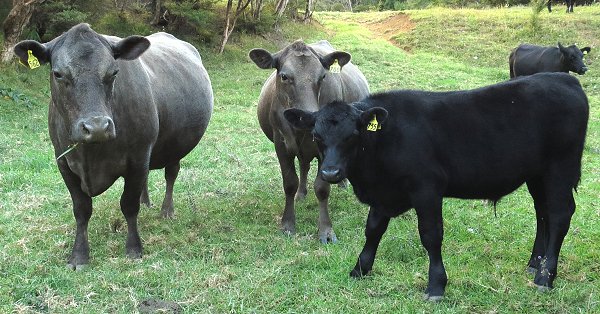 Curly's latest calf is a nice-looking black-haired daughter.  I realised the other day that she may be the animal which gets me past this Hypotrichosis defect both Curly and Endberly exhibit.  It doesn't matter too much here, but they're not cattle which could move to a cold climate. 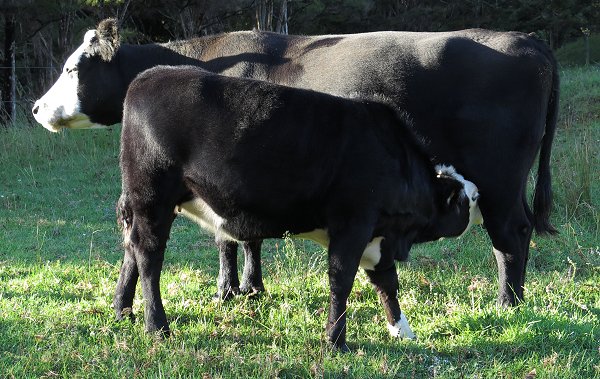 517 and her daughter, 746.  As she's grown bigger and bigger, I've often thought about Stephan carrying her out of the PW on her first day.

I was so close to culling 517 a few years ago, but she won me over by producing daughter 701, who went on to grow fabulously and hold her condition as well as her mother does.  I want fat cows!  (Cows able to maintain their condition well are healthier than thin, stressed ones and much of it is genetic and a result of being born to cows in similar condition.)