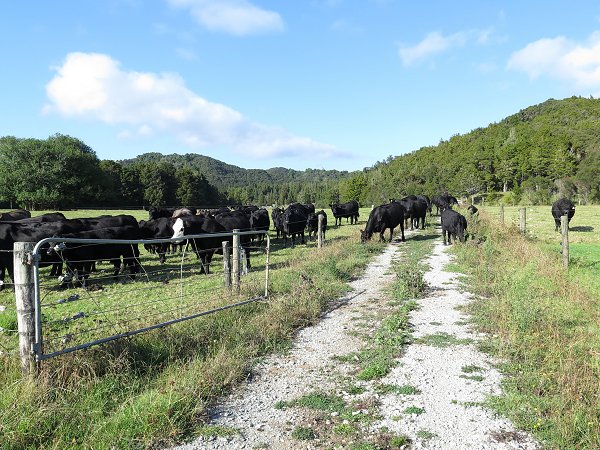 Mixing time for the cows.  The two primary mobs spent two nights as neighbours and today I put them together in one paddock.  There was the usual amount of chasing and fighting, but most of them were quite happily distracted by a paddock of new grass. 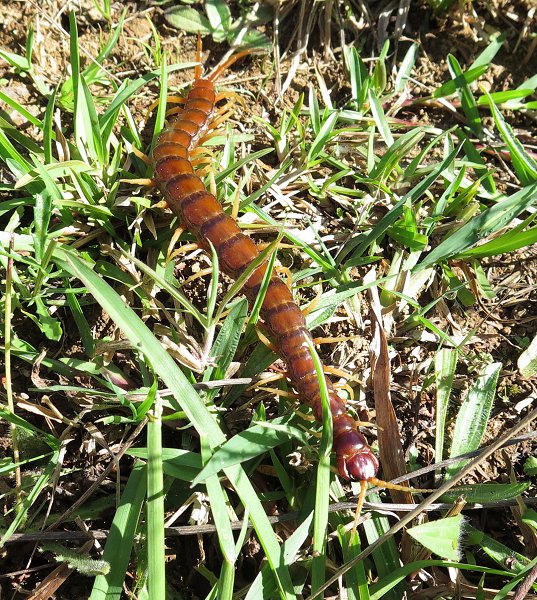 Mike and his boys came out to gather some firewood and found this alarming creature under a pile of wood: a Large Centipede, Cormocephalus rubriceps.  It moved very quickly across the grass, so was quite difficult to photograph well, especially since I was taking great care not to have it run up my leg!  It was more than five inches in length (12.5cm). 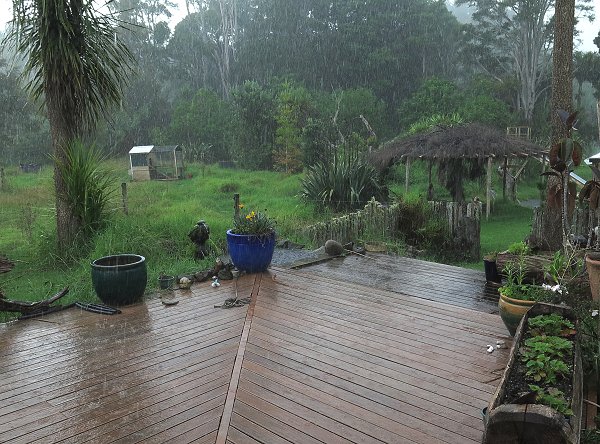 In the afternoon there was a violent thunderstorm with large hail and torrential rain.

Before the rain the thunder had been rolling around for about half an hour in an ever darkening sky.  As I was bringing my cows across the stream from Jane's place, there was a loud crack and then what sounded a bit like the ongoing roar of a large airliner high in the clouds.  It wasn't that and it wasn't wind, but soon afterwards huge raindrops and hail began to fall.  I've never heard a noise like it and wondered what was going to happen next!  I quickly shut the gates behind the cows and ran for the house, as the huge raindrops started falling. 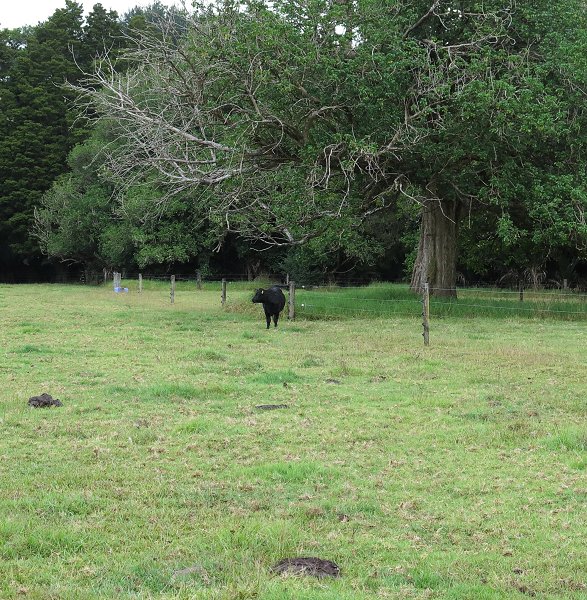 The mixed mob have eaten all the grass in Flat 2, so I called them to the gate - all except one lone calf, who carried on eating where he was, completely ignoring the movement of his companions.  Some animals are like that and they're a bit of a pain in a herd.  I walked down to see who this was and found Endberly's 755.  I have been beginning to notice that he's often away from the others.  There's nothing wrong with him, it's just his nature. 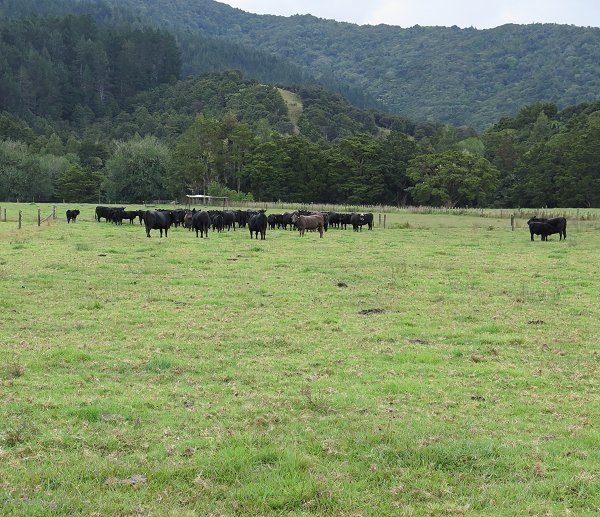 The others were all waiting up by the gate while I walked down the paddock and around behind 755 to bring him back to the fold. 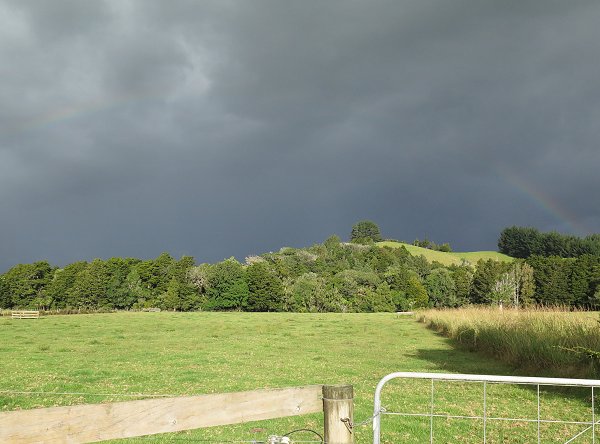 The sky looked extremely threatening and heavy rain was obviously about to arrive, so I sent the cows off up the lane and dashed home to avoid getting very wet.

Some days I feel completely fed-up with the current situation.  There's so much to do all the time.  I've realised, as I've been so busy and so tired, that being creative takes quite a bit of space and time.  No wonder artists and writers always shut themselves in attics and eyries; it's hard to be creative over a long period when the practical world is always pressing its needs upon you. 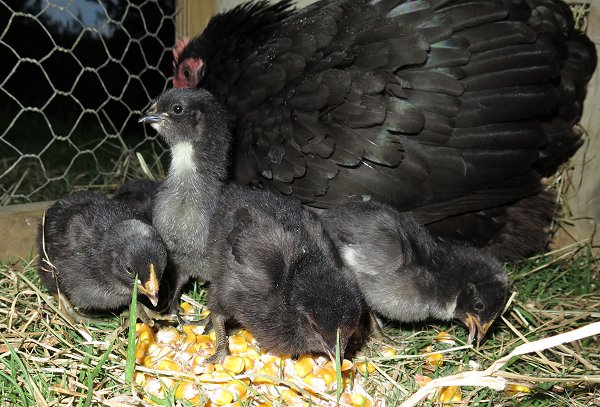 Little chicks are terribly cute.  The maize they're standing in is for their mother, not their tiny mouths, but she doesn't seem too keen on it. 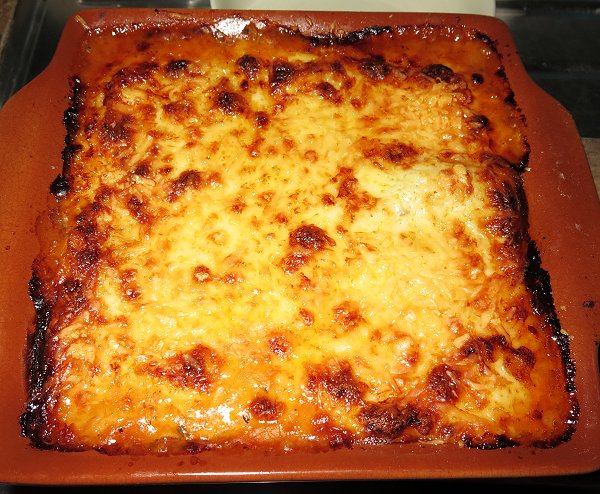 Another lovely dinner from Jackie's kitchen, this time a lasagne with home-made pasta.  Eating so well for many of our meals has taken a huge amount of stress off us at this difficult time.

From the very beginning I've thought I could tell the sex of these chicks and the bigger they get, the more they confirm my first impression.
The three in the centre are female and the other three are male.  The male chicks have had thick orangey combs from birth and the females' combs are dark and finer. 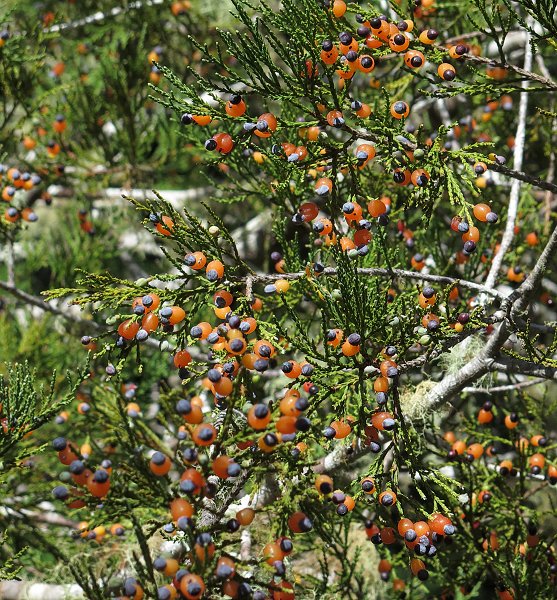 One of the best things about early autumn here is the change in colour of the Kahikatea trees as their fruit ripens.  This year the trees are heavy with brightly-coloured berries. 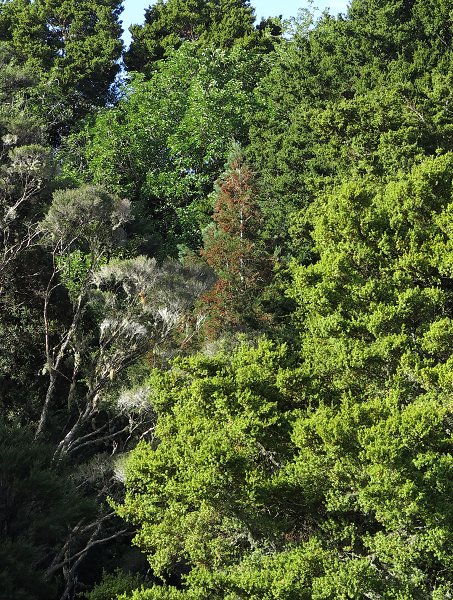 From a distance the fruit-bearing trees have turned from green to reddy-brown, their hues varying depending on the colour of the berries, which range from deep red to bright yellowy-orange. 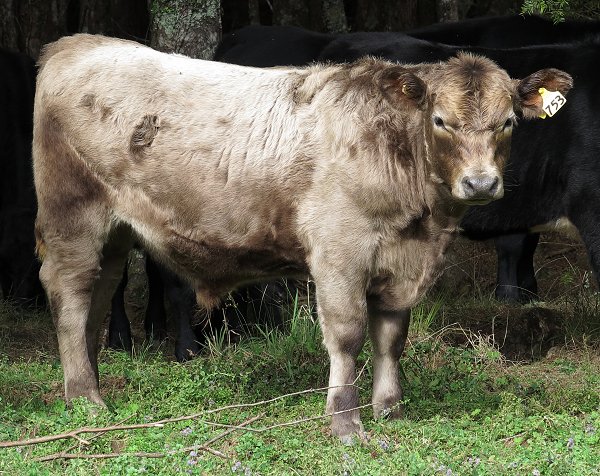 Drought was officially declared for parts of Northland today.  That doesn't make any difference to us, but allows some people with contractual obligations they cannot fulfil because of the drought to invoke escape clauses which depend upon an an official declaration.

It also feels supportive to have the drought conditions discussed in the media, to balance the endless "oh what lovely weather" comments about the ongoing and relentless sunshine.  Lovely long summers are a joy, but when the fine weather is never interrupted by periods of rain, it creates a lot of stress for those of us who need to grow feed for animals.

Stephan went out for the day, to sit somewhere else and watch people work.  His siblings, Rachel and Edwin, are helping eldest brother Richard redecorate his house.

I stayed home and worked on a website contract, which has become pressing. 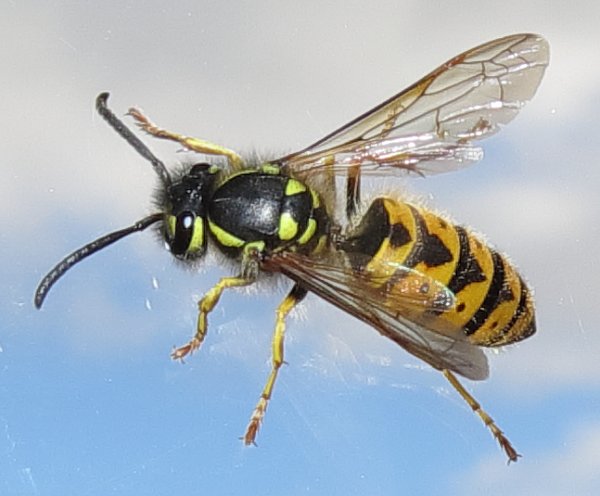 I took some wasp photos so I could confirm their identity as German Wasps.  They have spots on their backs, not just stripes.  Vicious buggers.

I brought the mob of 55 cattle to the yards this afternoon to give them all a Copper injection and then drafted the cows with bull calves out into their own mob.  The bulls have begun to show signs of sexual development and there's the increasing risk of them being able to impregnate the young heifers, should any of them start cycling this early.  It's a very small risk at this stage, because the bulls are unlikely to be fertile for a few months yet, but time to get them out.

I'll have to remove the two bull calves from the cull mob as well, in the next couple of days.  If the weather hadn't been so dry, I'd already have begun weaning and the cows which I've already separated from each other, wouldn't now have to be recombined.  But it's not a big deal.

Something was going on this morning which unsettled all the cattle, but I couldn't work out what it was.  It may simply have been that the two mobs were upset about being separated yesterday.  The cows with the bull calves were in the little riverbank area we usually use for the house cows and they were suddenly very nervous about something and when I let them out, they ran off in alarm up the lane, disturbing this mob in Flat 1.  I believe it is possible that they're more prone to anxiety because they're all on short rations and the pasture quality is not very good when it's thoroughly baked. 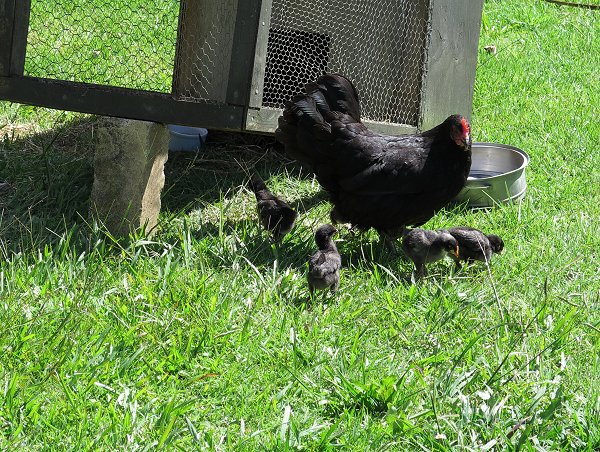 I let the chicks out for a scratch around the garden this afternoon and they had a lovely time.

When the air cooled, they all went with their mother back into their usual shelter and I removed the brick prop. 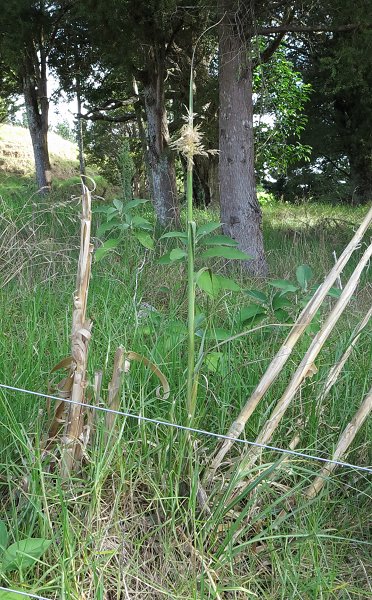 I finally got around to checking the perimeter of the hill Over the Road.  I need to put the Flat 1 mob over here, but since the big winds during the recent cyclone, wanted to ensure there were no trees down on fences.  All was as it should be.

This is the remains of the pampas I wiped with herbicide last year, demonstrating that I didn't quite kill it off, although it is obviously struggling, evidenced by its one deformed, pathetic flower. 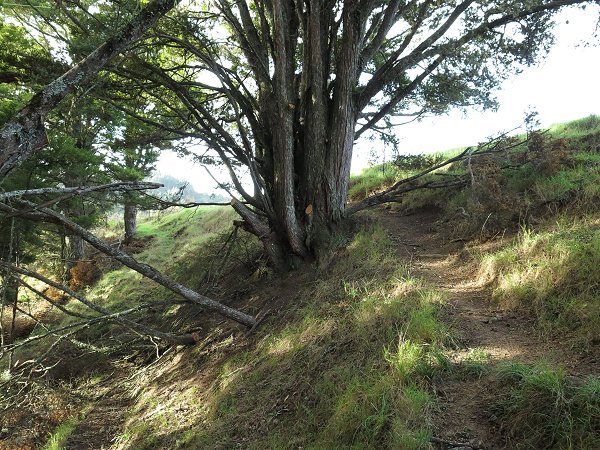 Then I went around to pick up Stephan's fuel cans, still on the side of the hill where he'd been working when he hurt his toe.

This, I think, is the offending tree.  I think Stephan was working on the low side and the branch which is resting on the ground with its foliage still hung up in the other trees, is probably the one which fell on his toe.

When he eventually gets back to work, he'll finish pruning that tree and the fence will run along the clear space to its left.