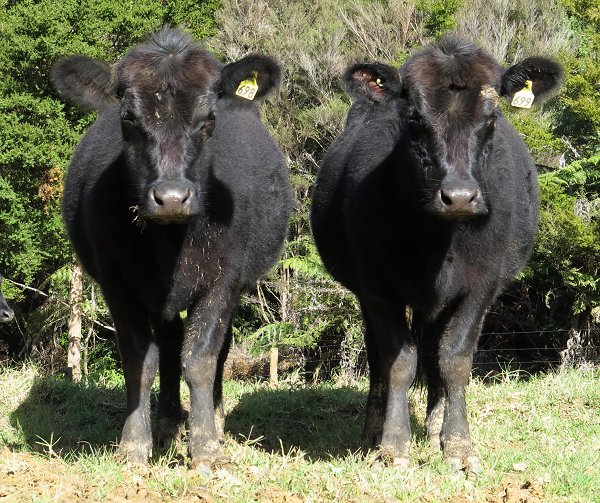 Identical twins, Gem and Meg.  I had to wait for them to stand in almost-identical positions.  They look rather short from the angle at which I took the picture, but they're not really.

If you look very carefully, you may see that Gem 698's facial hair-whorl is clockwise and Meg's is anticlockwise.  Interestingly, it looks like the hair which grows from the hair-whorl on each poll goes in the opposite direction on each as well.  They are mirror twins; I still can't get my head around how such twins with the same DNA, can have mirrored features.  Mirror twins result from a late split in the embryo; much later and they would apparently have been conjoined.

I showed my sister, Jude, this photo and her comment was, "all cows look identical, don't they?"  Pah. 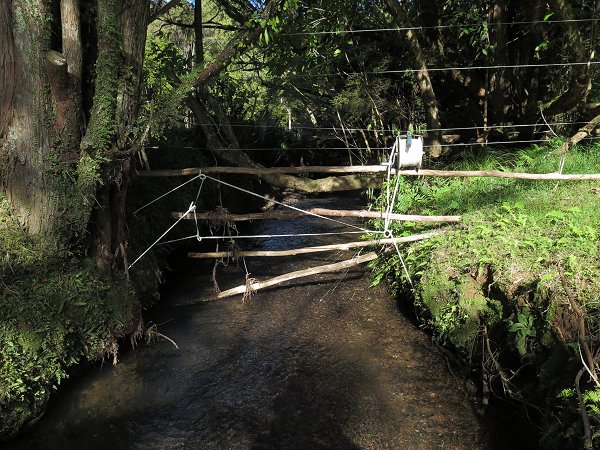 I moved the heifers into the Bush Flat paddock.  This flood-gate is the entry point for 721's forays into the reserve area.  I reinforced it with some electrified tape and will hope that stops her. 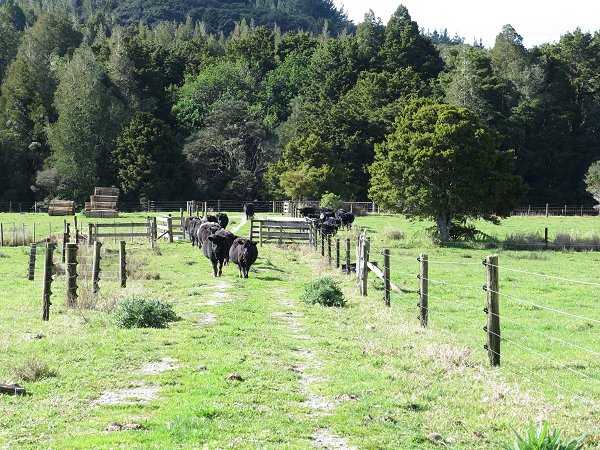 The cows are back on this side of the road again.  I'm always a bit nervous when they're Over the Road, there being a higher possibility of other people's dogs around and so on.  At least the fencing is far more secure than it used to be, so they're unlikely to be trespassed upon, or to get out on to the road - not that ours ever got out, it was always other people's getting in.

I'm off to Wellington tomorrow evening for the annual Veterinary Council complaints committees training.  Fortunately it occurred to me to have a look at all the material which had been sent through for the meeting, so I spent the day reading in preparation. 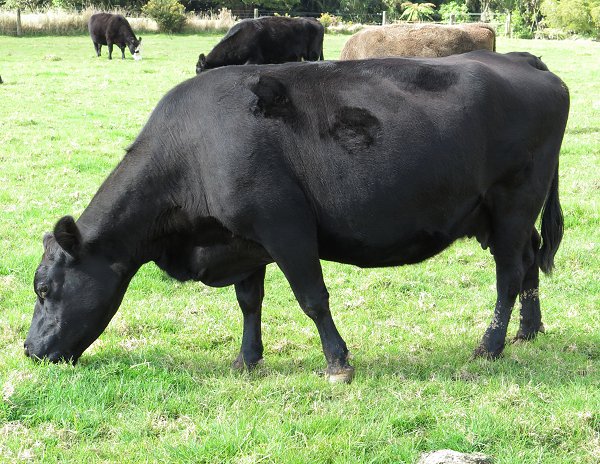 Last year 475 was really light.  This year, she seems a great deal better.

Last year was weird and I have no idea why.  Animals were thin and sick and odd - several thin cows had to be grazed separately, two heifers died or were shot for weird ailments.  I have no idea what was going on.  The number of animals on the farm was the same as this year and the weather was pretty much the same in terms of temperature and grass growth.

I'm glad this year is better.

There are a couple of thin cows, but they're not in a terrible state. 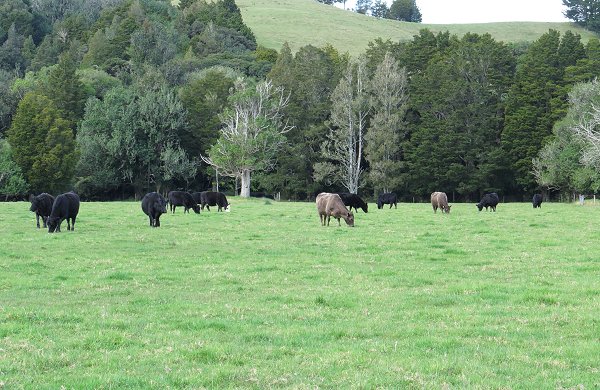 I like watching the cows moving up a new paddock after shifting them.

I caught the 5.30 flight out of Kaitaia this evening, arriving in Wellington (after the obligatory stop in Auckland) at 7.40pm.

I had a very pleasant light meal in the hotel restaurant and a comfortable night in (as is apparently the usual thing) a dirty room.  I'm always quite shocked by the lack of cleanliness in hotel rooms.  It seems to me that cleanliness is one of the primary things one ought to ensure, as a hotel owner!  It was the Abel Tasman, in case you'd like to know.  I always give constructive feedback, but it seems they always ignore it.  Oh, and as usual on my trips to Wellington, I was addressed as "Mr" or "sir" on three occasions during the evening.  A small slip of paper in the room addressed me thus, "Welcome back, Mr Renner ...".  Is a year long enough for gender-reassignment?  I'm quite sure I was a woman last time I was there.  They were obviously not convinced.  I must try harder to be feminine... yeah, right.

The Vet Council meetings are always serious and interesting and it's lovely meeting up with everyone else.

When the business was finished, I caught a shuttle to the airport with the others who were flying out and hopped on a plane to Nelson.

Earlier in the year, Sonya, a friend from Taipa Area School where we were in the same class (there was only one and Sonya came to the school in 1976) from Form 1-5 (years seven to eleven) contacted me again by email.  We exchanged a few messages and Sonya invited me to go and visit her if I was travelling in her direction and so I kept an eye out for cheap flights from Wellington to Nelson to coincide with my trip to Wellington and then told her when I'd be coming.  We haven't seen each other since she came up in my first year or two here.

Sonya and her partner, Peter, picked me up from the airport and we drove for about forty minutes to Motueka, where they live. 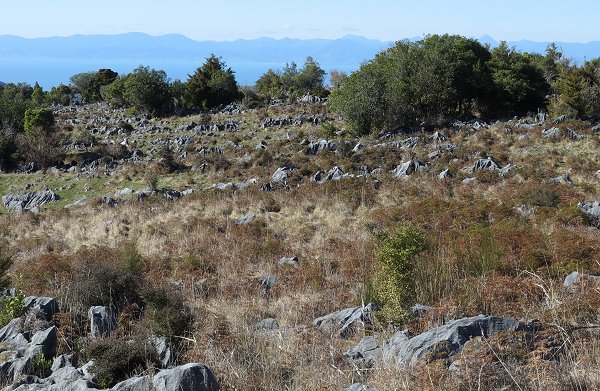 Sonya had arranged some free time for the duration of my visit, which meant we could go gallivanting like the teens we once were.

Today she drove us up and over the Takaka hill and we had lunch in Takaka and wandered around looking at things.

This was a lookout area at the top of the hill, looking back in the direction of Nelson.  The rocks were gorgeous! 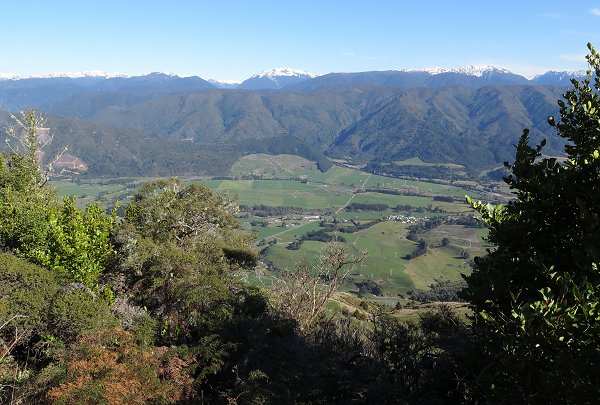 From a lookout on the other side, on our way down, this fabulous view. 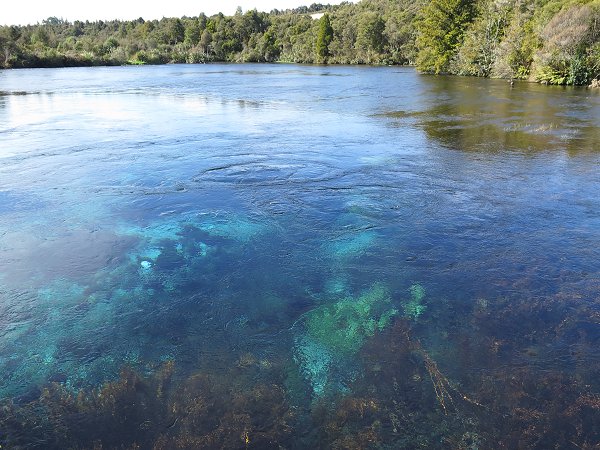 I've heard a lot about Te Waikoropūpū Springs; unfortunately a lot of that recent publicity has been in response to the infestation of the springs with the invasive "rock snot" weed, Didymo.  But it was a beautiful place and the welling up of such a huge volume of water was fascinating to watch.  There's a good lot of information about it here.  The downloadable pdf info is well worth reading. 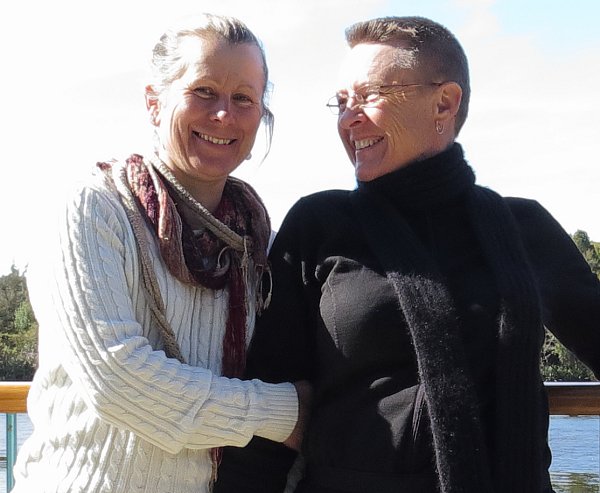 I didn't quite get the lighting right for a timed shot of the two of us, but any darker and our faces would have partially disappeared. 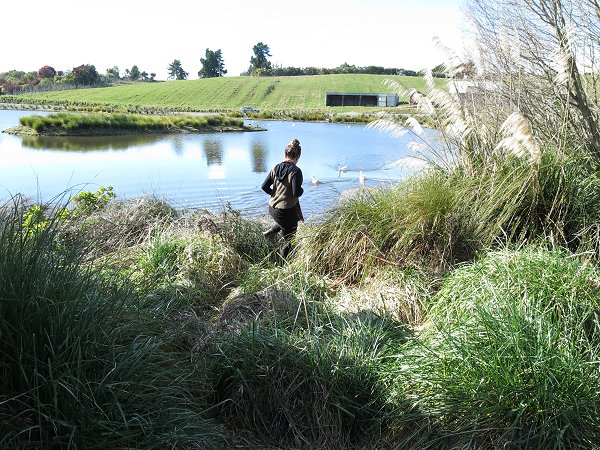 Sonya and Peter are about to build a house overlooking this lake, in which more than a dozen geese live.  To prevent their population exploding, Sonya regularly collects the eggs and her son eats them for breakfast.  I think I might take a few home with me for our goose. 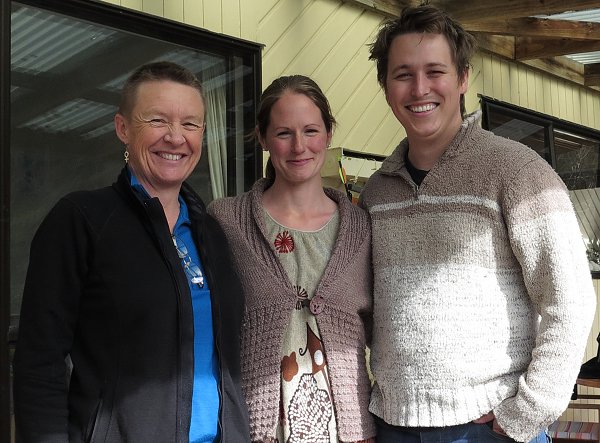 With the help of a learner driver on a training expedition, I visited Kelly and David (son of Stephan's sister Rachel) on the other side of Nelson.  It was lovely to see where they live and catch up with them in person, instead of only by email or second-hand reports. 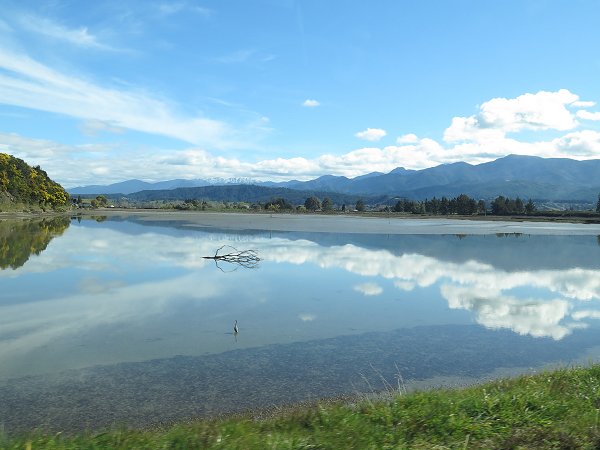 The weather has been absolutely lovely while I've been down here.  At home there are severe weather warnings about a big storm!