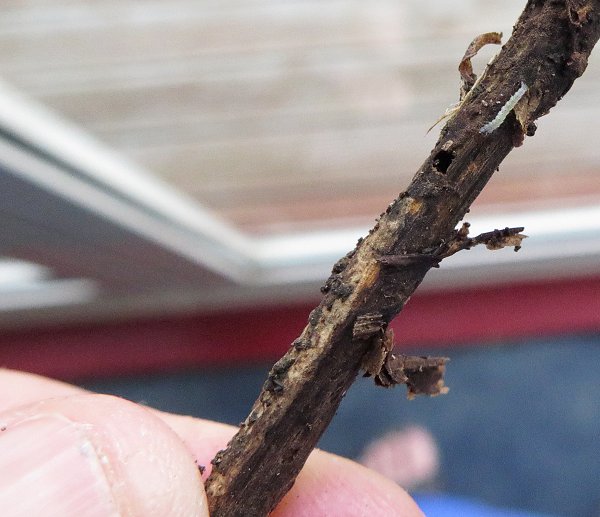 A few days ago I had a look in the container in which I'd put the Puriri Moth eggs but couldn't find anything interesting.  Today I lifted the litter around a bit more until I saw some fast movement and found several caterpillars like this one.  They're only a few millimetres long and they're very agile. 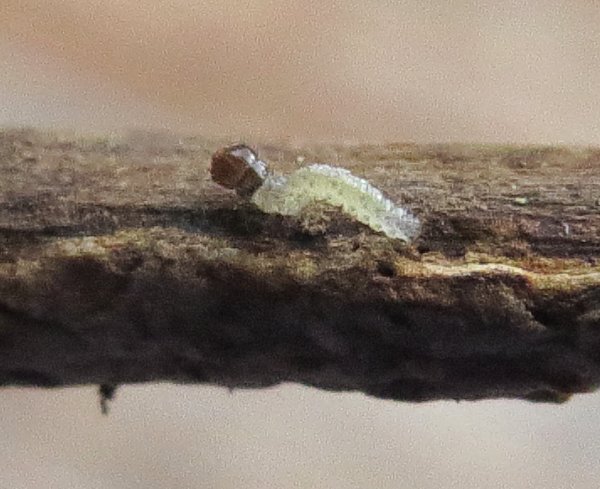 The caterpillar retains the distinctive dark head throughout its life.  I've seen a couple of mature caterpillars and managed to extract one once from a dying tree; its picture here. 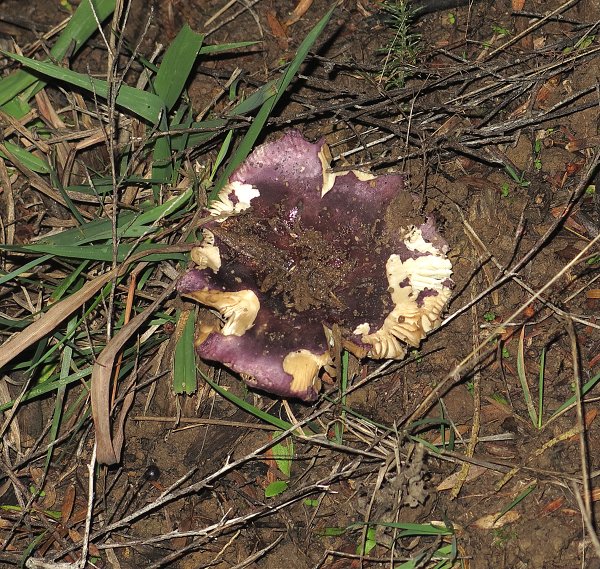 I can't recall ever seeing a purple toadstool.  It's a bit knocked around - out in the open paddock area on a previously scrubby slope - and it may only have turned this colour as it passed maturity and began to decay. 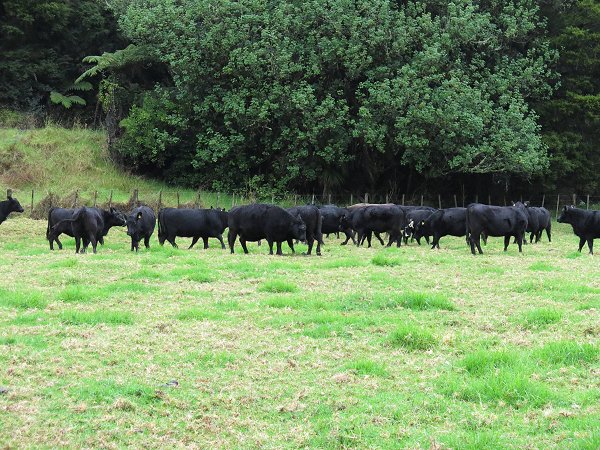 The Rising two-year heifers and their elder sisters who've just been weaned from their first calves, all need about the same levels of feed through the next few months - they're pregnant and still growing - so I combined the two groups this afternoon.  I decided to do the mixing in the Pig Paddock since it's flat and relatively safe and tomorrow we'll put them into the Over the Road hill paddock which has oodles of grass.

The older heifers were in the paddock first and just as the young heifers were approaching them two idiots in a metallic aqua/blue single-cab ute let off a couple of illegal road-side shots just up the road (we found one of the cartridges later), so that everyone got a fright and got far more upset than they ordinarily would.  I took a while to calm down, myself!  Shot-gun blasts are extremely loud and when unexpected, very startling. 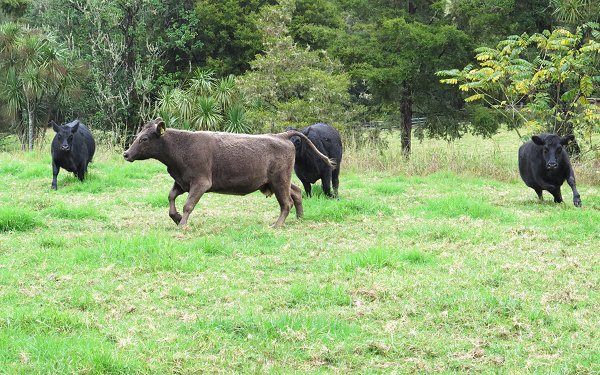 Endberly, like all the funny-coloured cows, always gets a hard time in a new mix - although I've noticed that her mother, Curly, now she's one of the senior cows, is far more assertive.  They run around for a while and eventually, when the chased animal stops, the others usually stop harassing her.

It was surprisingly difficult to distinguish the younger heifers from the older ones: they've grown well!

We went up the road to finish a little job on that new boundary fence: the connection of the electric feed from the existing boundary to the new bit and to install a hot-wire along the top of the not-gate which Stephan opened up for the fertilizer spreader last week. 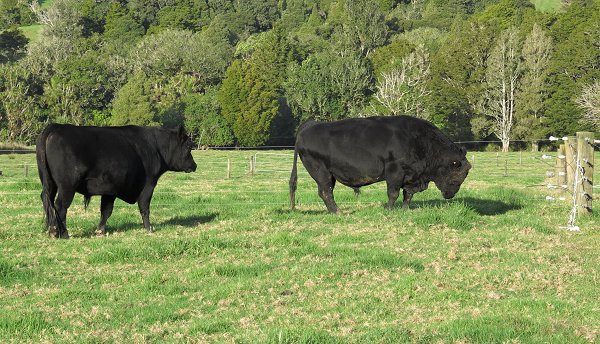 The two bulls have been together for weeks, but a shift from one paddock to another elicits this sort of display.  Funny old bull.

We took Elizabeth and William out for dinner this evening to help us celebrate Stephan's birthday.  Stephan always enjoys such nights out, but I don't find them quite so satisfying these days; home is warmer and more comfortable and the food, on such special occasions, is usually better.  But when it's your birthday it's better if someone else cooks.  The wine was fabulous!  I think it might be time for a vineyard visit.  Waitapu Estate is 27km by road from here, but only 11.5km as the Kukupa flies - as they probably do, straight over the Herekino Forest. 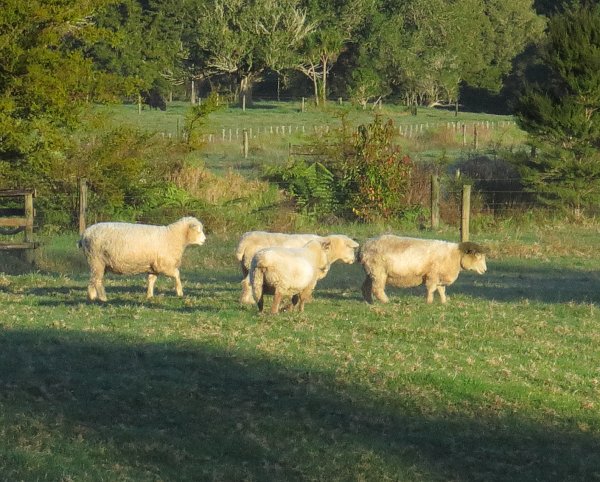 Fat ewe with a new hair-do.

The fat triplet ewe was cast this morning, in a dip in the House Paddock left from the trench through which the main water-pipe runs.  She'd turned over into a cow pat.  Fortunately I spotted her before we went out and Stephan walked out and helped her back over onto her feet.

There was almost a frost, so I hope she wasn't upside-down for long.

It's a funny thing, life.  We're lucky in that presently, despite the prevailing difficult circumstances, in general everything is marvellous.  We get on well together, have a lot of fun without much external input, are both usually relatively fit and well and have developed our resources (the farm and our own skills) to the point that they now provide income slightly in excess of our needs and our current rate of ongoing development of the farm.

Today we exercised ourselves with some serious decision-making.  The people from whom we bought our brand new (and we still think of it that way) ute fifteen years ago, sent out an advertising email a couple of weeks ago.  When they phoned last week, I concluded they'd probably not had a very good response to their invitation to go and test-drive new vehicles and consider some rather tempting financing options.  I told the guy what I'd consider buying if we were to replace our ute and eventually managed to impress upon him that my exact specifications didn't mean that he could bend them to "almost exact", because that really isn't the same thing.  We agreed to go and have a look.

When we bought our ute, we could only afford and only needed space for the two of us, so we've been travelling around in our single-cab ute with a shared bench seat and no room to put things inside when it's wet.  For a while we've been thinking it may be time to opt for a bit more comfort - separate front seats so when I'm driving Stephan isn't hugging his knees and when he drives, there's room to carry things inside when it's raining.  We don't often carry passengers, but it would be good to have the room to do so more safely and comfortably and when shopping in town, good to be able to store things locked inside, without having to continually transfer them from the deck to the front seat.

We talked through the options and then test-drove a vehicle which didn't feel much better than ours.  We asked for a valuation on our ute as a trade-in and were given a figure of only $3,000.  We've been pretty good about maintenance and preventative care and while that may be its market value, its real value to us is still far higher than that.

Until about 11pm we were still in "yes" mode.  Then we considered a whole lot of things, including the fact that we're not yet entirely sure Stephan will be able to return to full working capacity and that we may have to deal with a reduction in income.  If either of us became seriously ill or died, the other would be left with a debt to service which would be stressful - and if there were only one of us, we wouldn't need more seats anyway (one has to think of these things, ok?).  And, we still have significant value in the old ute left to harvest.  Having made the decision, we both realised we both felt a great deal more at ease.

Besides, this wasn't a "last chance" deal.  If things are still so bad out there the company has to offer finance at 1% to attract customers, it's likely there'll be similar offers again.  It's remarkably easy to be carried away by a good sales pitch.

I find these exercises very useful in checking our priorities and acknowledging how good things are.

This morning we had our first real frost, although it wasn't as cold as it sometimes is when that happens, so hopefully it won't knock out too much of the Kikuyu. 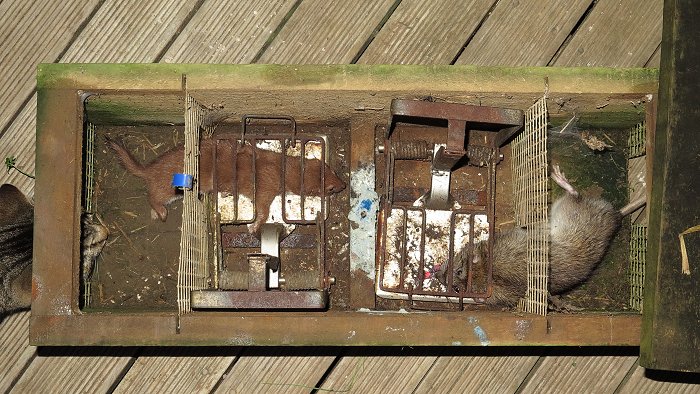 Stephan called me to take a photo of his DOC200 trap from the area around the chicken cages.  He'd caught a weasel and a large rat.  Note the "photo-bomber" on the left.

I returned from a quick appointment in town to find a hole in the spare bedroom ceiling!  The plumber whom we engaged to fix our roof a few years ago came to find a leak which has been worsening over the last couple of years (not a bit he'd previously attended), causing a mouldy spot and dampness in that room.  Because we'd need to re-do that bit of ceiling anyway, he poked a big hole in it to find where the water was getting in, fixed that but left the ceiling open so the area can dry out properly before we fix it up again.  A leaky roof is an unsettling thing. 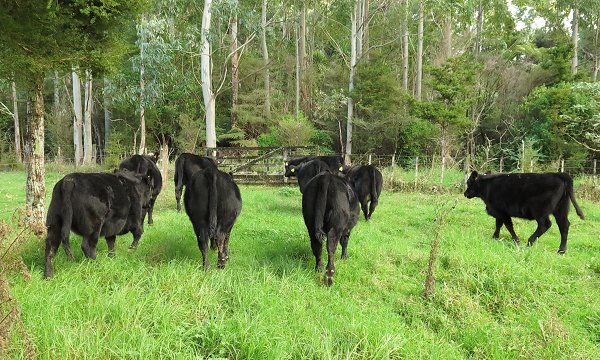 Lovely heifers.  As I take on more computer-based work, I find I spend less time out with the cattle - or I'm just getting lazier.  I remind myself I must spend time amongst the animals to continue their quietening each year.  Besides, I like them.