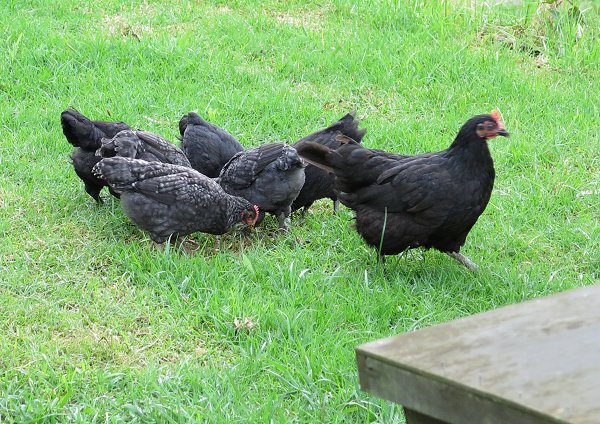 The chicks keep on growing.  The two sexes are now impossible to miss, with the males being grey and slightly speckled and the little hens, black.

I got Zella and Imagen's calves in to the yards to weigh them today.  As usual, Imagen's calf is quite large, now 317kg.  Zella's son is 289kg, not a bad weight at all, for a calf with only half-time access to his mother.

William and Elizabeth came out today to do our gardening.  They've been so lovely.  I don't have the time or inclination and Stephan still can't.

A District Nurse came to have a last look at Stephan's toe today, before discharging him from their service.  But I mentioned I was a bit worried about its colour and Stephan's pallor overall; both were a bit too pink for my liking and Stephan was feeling generally off.  The DN phoned our doctor and asked him to prescribe a course of antibiotics again, which I promptly went to town to collect from the chemist.

And then my sisters, Rachel and Jude, arrived with four children - Jude's three and Stella's friend Matariki. 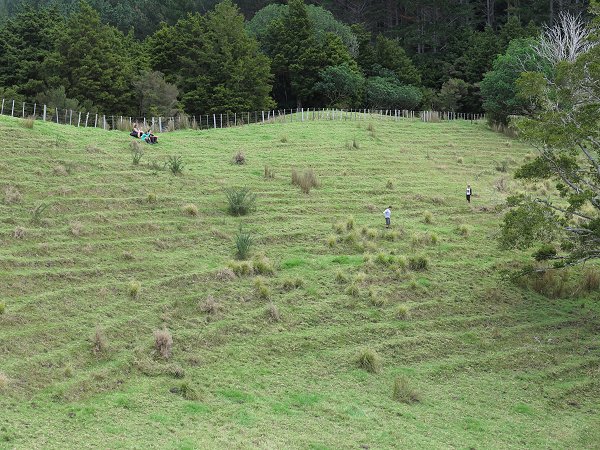 I suggested a walk and managed to get them right around the back of the farm!  Here they were waiting for me to close the gate from the Middle Back to the PW, after moving the cows.  The two boys were hitting weeds with sticks, as they always like to do. 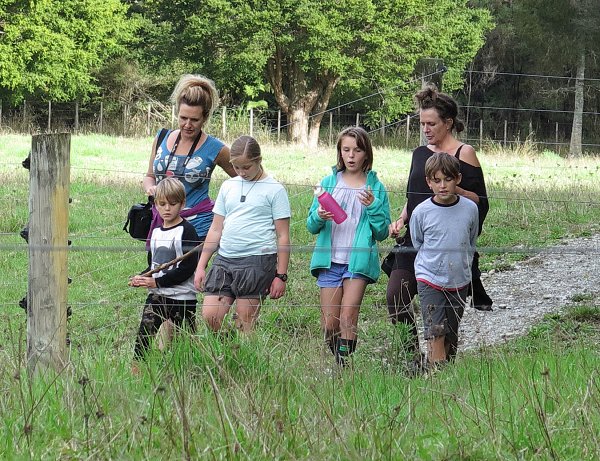 On our way back home we followed the next five cows and their calves to be weaned and after moving the previous group, I separated those ones for their three-day yelling period.

This system is working well, with the cows and calves having direct nose-to-nose access to each other through the wooden rails and steel gate at the top of the House Paddock for three nights, at the end of which they're almost quiet again, then spending the next few days in adjacent paddocks across the flats. 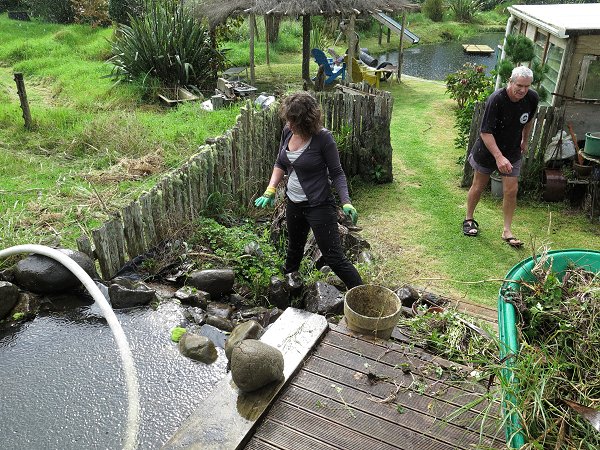 We had a quiet sort of day just messing around at home.  Rachel did a fabulous job on the waterfall, which had been overgrown by buttercup.  She weeded it all out and rearranged the rocks.  It looks lovely again.

Thursday the 1st of May 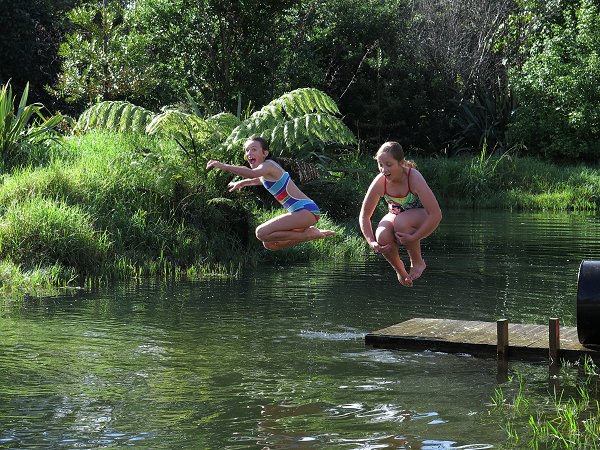 It's still warm enough for the children to swim, but they don't stay in for nearly as long as they do in summer. 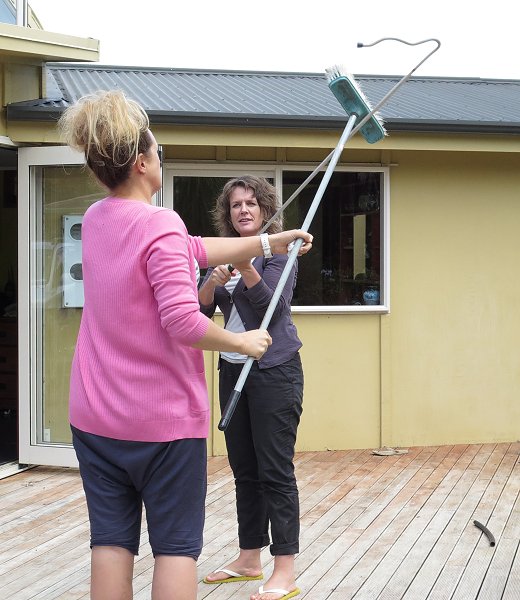 What can I possibly say?
Rachel was determined to experiment with catching Jude with the sheep crook and Jude equally determined she shouldn't. 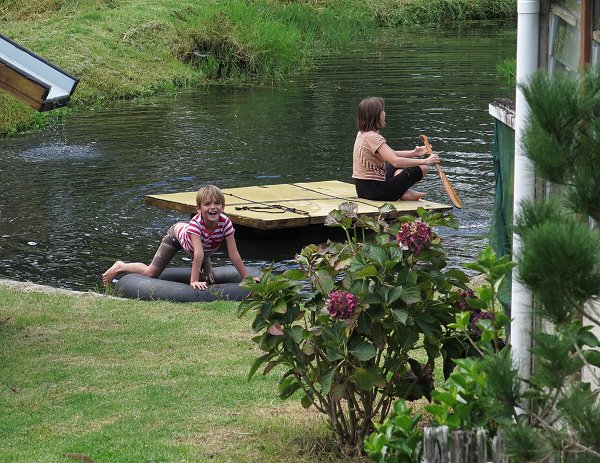 We still supervise them closely during swimming, but the children are allowed to play around the pond on their own (together) a bit more now than when they were younger (Louie the youngest, on the tube, is now eight). 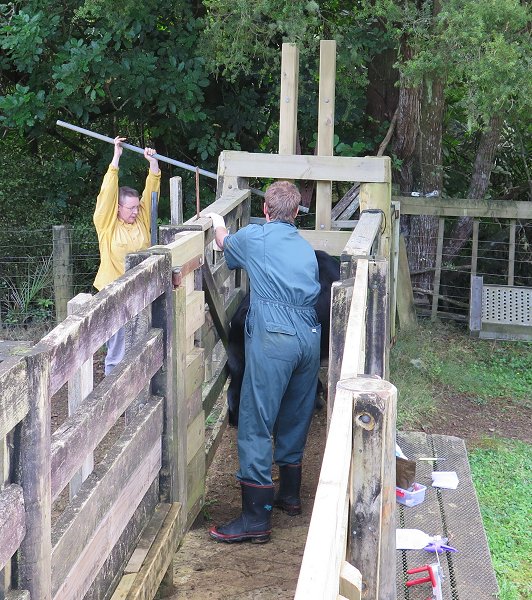 I engaged vet, Nathan, to come and castrate three of the bull calves.

I didn't castrate any of the purebred calves early this year, having made some later-regretted early decisions in other years.  Now they're around six months old, there are obvious differences in their development, growth-rates, rates of maturity, conformation and so on, all important considerations.

While I held the head-gate open, Nathan did the part Stephan normally would, pushing the animal forward until he put his head through the gap and I closed the gate on his neck.  Fortunately the gap in the closed gate is exactly right for the calves, since Stephan never got around to altering it when we discovered it was too narrow for the cows. 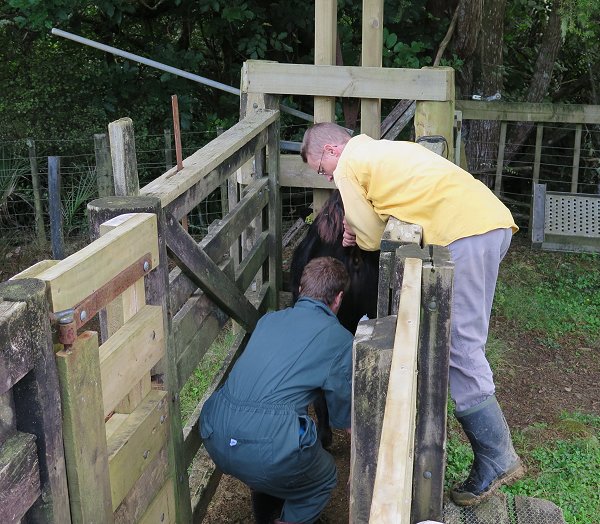 I held each bull's tail firmly in a vertical position, which deters them from kicking, as Nathan administered several small injections of anaesthetic around the scrotum, then applied some very strong, tight rubber bands.  At this age, there's no way you could safely use the usual castration bands.  They're also required (after some maximum age I haven't checked on lately) to have pain relief during the procedure.

The castrated bulls seemed very little affected during the rest of the day, but I'll keep a close watch over them to ensure nothing unexpected happens. 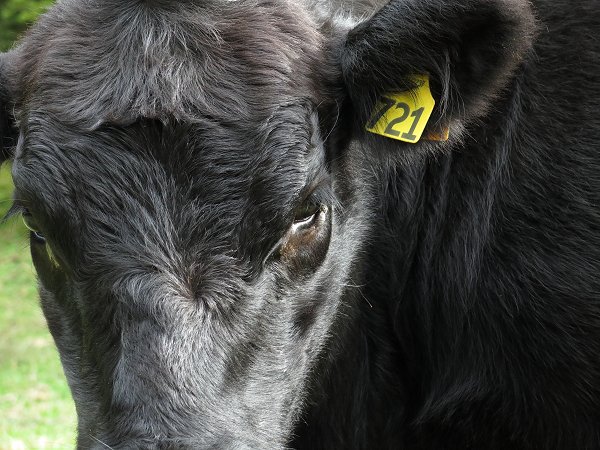 721 has a cluster of warts on her left bottom eyelid.  She's the first of this group of young stock to have any, I think.  Interestingly her mother also had them. 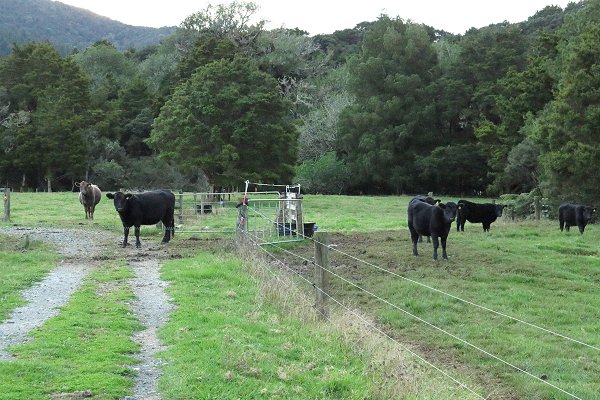 The fourth lot of weaning, this time five first-timers (including grey Endberly) and one cow.  Parts of the House paddock near the gate have become rather muddy, but there's still a nice lot of grass for the calves to eat.

The twins, Gem and Meg, are in this lot.  I mixed a previous group around a bit so the two of them would fall into the same group now.  Their calves weaned with a 17kg difference between them and interestingly it was Meg 699's which did the best - she was always the smaller of the two by 4kg through their young life, back when 4kg made any difference.