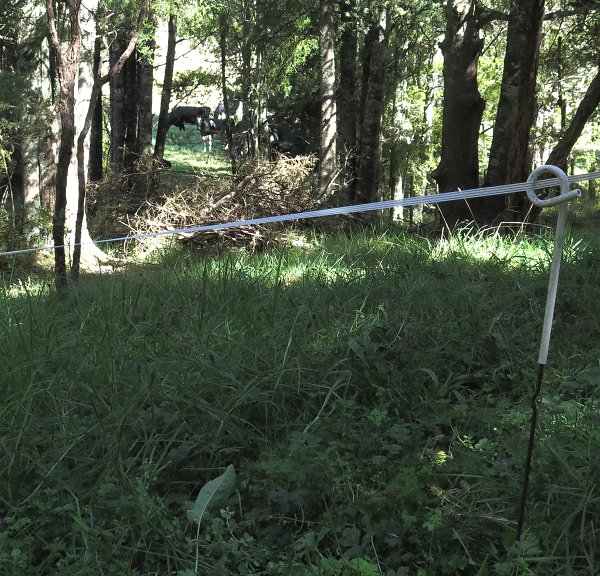 We're gradually double-fencing our boundaries, to prevent contact between our cows and stock on other properties, but the big paddock Over the Road is still not done.  It has a couple of hot-wires on the existing fence, but cattle, if they're curious enough, can still carefully nose through between the electric wires without getting shocks.  Noticing a mob of dairy grazers on the property next door, I took a reel of electric tape and some standards up the road and erected a temporary barrier away from the fence, so there could be no contact between those unknown cows and mine. 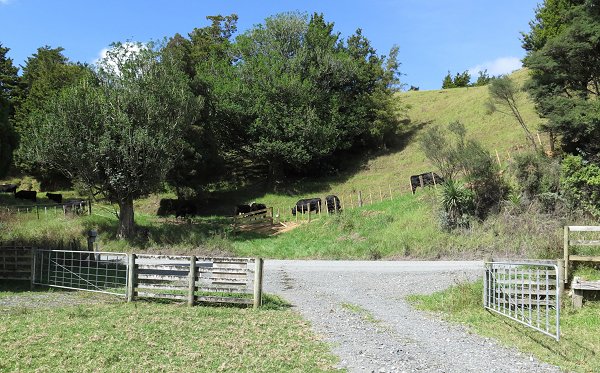 Back at home, Graham, who has been cutting firewood from our place for the last few years, was due to come back out around lunch time, so I brought the cows and calves in to the yards to wait until he was there to help us move them over the road.  It's usually a quiet process, but better to have two able-bodied people on the job in case there's a problem.  With three of us (Stephan hobbling along with a crutch, in case he needed to wave it at an approaching motorist) it was a breeze. 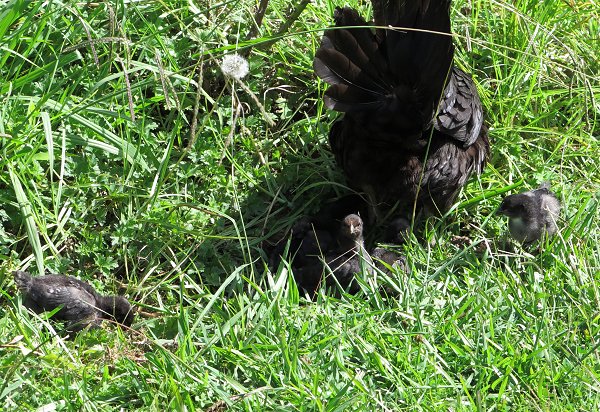 I let the chicks out again early in the afternoon and left them to peck around the lawn and garden.  There's not much they can damage. 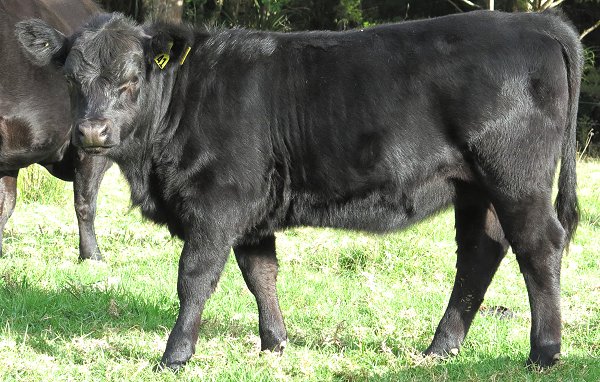 The third and last of 571's daughters, 741.  Her elder sister, 710 (pictured here at a couple of months older), appears to be doing well-enough with her first calf this season.

571 is only six, but she's been a hard cow to keep condition on.  Her daughters may yet prove to be similar, despite their early promise.  My preference is for cattle which don't require careful nursing through the winter - if there are fat cows in the herd, there's enough to eat and if some are still too thin, there's something about them I don't want to continue. 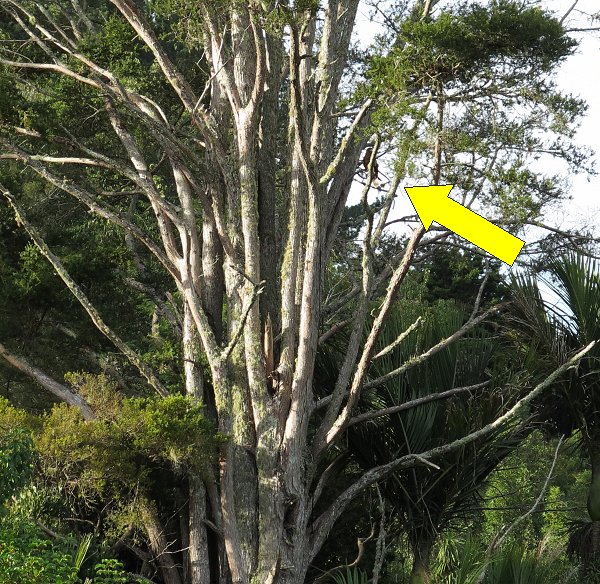 The chicks were still happily pecking around the garden when I arrived home from my cattle checks.
While I was having my afternoon-tea there was a sudden upset: the hen leapt up in the air with alarmed screeching and as I ran out to see what had happened, a young hawk swooped up from its low pass over the garden.  Hawks don't usually come quite so close to the house, but this youngster (young birds have very dark feathers) had not developed the usual caution yet and saw the chance of an easy meal.  Fortunately all of the chicks were alright, but took some time to emerge from the clumps of long grass into which they'd dashed.  I put them back into the safety of their cage.  The hawk came swooping in again for another look before settling in the biggest Totara tree on the other side of the pond, a very close perch for such a bird.

Stephan had spent the afternoon with his siblings again and just as I was about to set out to collect him, a spot of sparkles appeared in my field of vision and I had to ring and say he'd need to wait until that cleared, or find his own way home.  Fortunately Richard dropped him home, because I couldn't see properly for a couple of hours.  My migraine presentations have widened in scope in the last couple of years, so that the whole experience is now entirely unpredictable.  Sometimes there'll be the advance warning of a visual aura with sometimes very little pain to follow; other times awful nausea and blinding pain with no warning.

Nursing my now-pounding head, I set out to get the house cows in from the Camp Paddock and could find no sign of them anywhere.  I started to walk a little way up the slope and realised I was in no fit state to go any further, so returned home.

At ten o-clock, after two lots of migraine drugs, I was feeling a little more normal again and went out with my torch and found the cows and calves, at the very top of the paddock on the ridge where it looks over into the Frog Paddock.  We had some alarming fun getting down the hill!  It's very easy not to notice a black body in the midst of the scrub and more than once I accidentally invaded the personal space of one or other of the cattle.  Bearing in mind their size, that's not the best thing to do.  Distances and awareness of each other are all messed up by bright torch light.  If there's enough moonlight and I need to shift cattle in the dark, I'll usually turn the torch off, because then we can all see better. 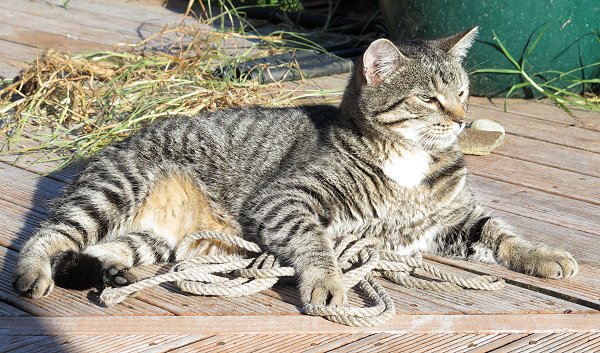 Finan, resting after subduing a bit of old rope.

I had to take a picture of this creature to clarify what I thought I'd seen.  Most of the rabbits here are the same sorts of colours as that fat cat, above (without the stripes, of course).  There was once a black rabbit away out the back of the farm, so they seem to appear from time to time amongst the wild population.  This one has a white nose!

An old friend rang this morning to tell us her husband had died in the early hours this morning.  After tidying up a few necessary jobs here, I went in to town for the afternoon.  There were other friends around for part of the time, but Gillian and I were alone together when the undertakers brought Pat home again in his coffin.  It was good to have been able to be there until some of her family were able to arrive.

We both spent most of the day with Gillian, helping with whatever needed doing to prepare for an onslaught of family and friends.  Ordinarily Stephan would be doing a lot of the practical stuff, but as he's out of action, we left him sitting with his foot up while the rest of us dragged baby furniture out of the attic, cleaned and tidied and worked out where people could sleep.

Tuesday the 1st of April

We took Jane up to the airport for her 8:50am check-in.  Jane is jinxed when it comes to flying.  As often as not, when she's been booked to fly, the plane hasn't arrived from Auckland, or if she's flying from there, it won't go for some reason.  Today as we drove her to the airport, she was quite sure the curse was not going to get her, the weather being beautifully clear and fine.  I didn't mention the forecasts for fog in Auckland, which had prompted me to check the Auckland Airport website before we left, to make sure everything was flying on time.

Jane checked in and Susan told us they weren't quite sure what was going on, but the plane hadn't left Auckland because just before departure time the fog had rolled in and everything was grounded!  As she had connecting flights booked, she'd not be going home again, so we left her there and headed into town to visit Gillian again.

We found out later that the plane didn't leave Kaitaia until just after one o'clock. 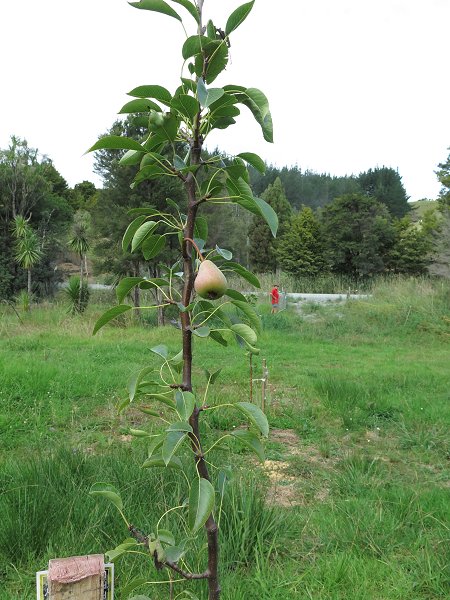 I put the water on at the orchard yesterday evening and we went up the road this afternoon to turn it off, after making sure all the trees' sprinklers were still operating properly and to bucket some water across to the two trees which aren't on the system (the Walnut and a Persimmon).

This little pear had grown on one of the trees.  Sort of the first fruit of the orchard, but it doesn't really count, just looks pretty.

Stephan's able to stand and walk around a little for short periods, but then has to go and sit with his foot up again for the rest of the day.  At least he's able to get out and about a bit now.

We went to Pat's funeral today.  Gillian had asked one of her daughters to do a Bible reading, but had then subsequently asked if I'd do it.  I'd prepared, finding an appropriate translation on-line which I printed out in a nice, easily-readable-sized font, with italicised words to remind me where to put emphasis and then when the moment came, it was apparent that the priest hadn't been informed of the change in personnel and so I hurriedly handed my page over, to save an upset in the middle of the service.

I rang my mother, Jill, this evening to tell her about the funeral today, since she had married Gillian and Pat eleven years ago.  Sometimes Jill's still on form (she has steadily advancing Alzheimer's Disease) and so I tested her by telling her about the reading at the service, from 1 Corinthians 13, verses 4-13.  Her second attempt was almost correct - she'd started with verse one from that chapter.  She recited the St James' translation about charity (the modern translation substitutes love) and began to hint at her understanding of "charity" as a theologian and I thought we were about to have a really interesting conversation, until I asked for clarification of some point and she must have slipped out of her memory again and told me she was just reading her book, getting ready for bed.  It was a lovely moment for me.  One of the only satisfactory aspects of our adult relationship has been her willingness to talk about theological concepts which are of interest to me from a humanist point of view.  Those moments are now almost all gone. 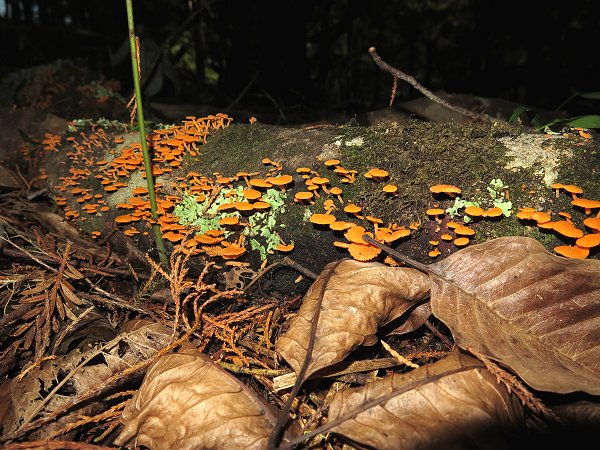 While we were at the funeral yesterday, there was heavy rain for several minutes.  Today, as I walked through the bush reserve Over the Road, things were all lovely and damp, with this bright fungi in abundance on several fallen tree trunks.

Stephan, having tired of sitting around constantly, went out and spent a little time in his shed, until he was forced to sit down again.  He made me a nice new butter pat, to replace the cast-off one I've been using as one of my butter-making pair.