Sonya drove us to the Abel Tasman Park entrance this morning and we walked along the very well-appointed path to some of the first beach areas.

The boy is André, Sonya's son. 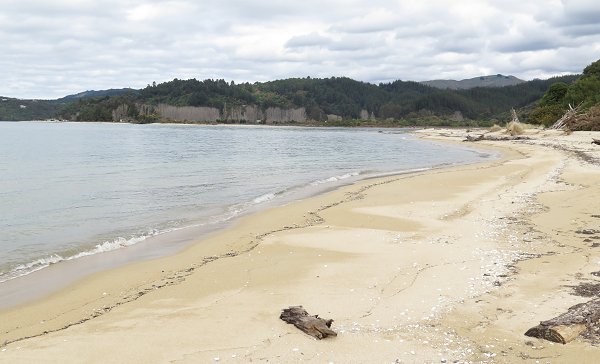 The colours were lovely.  We saw Pied Stilts and Oyster Catchers on one of the beaches. 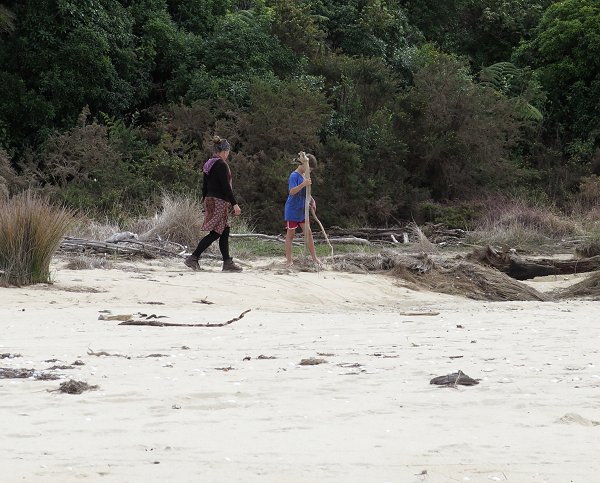 We passed a few walkers with big packs coming out of the Park (it's one of the National Parks through which people tramp) and quite a few like us, just strolling on this calm Saturday morning. 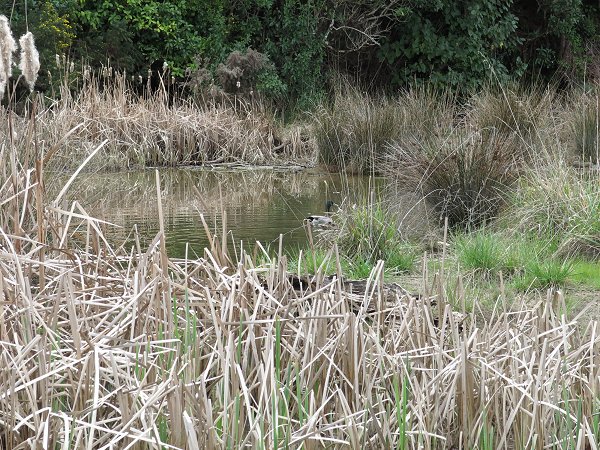 Behind one of the little beaches, a fresh-water area.  All over the dry sand were tiny bird footprints.

My holiday with Sonya was really good.  I wasn't sure how it would go, since we hadn't spent any time together on our own since we were teenagers.  But we enjoyed each other's company very much and we talked about a lot of important things.  There is something immensely comforting about renewing friendships with long histories.

This morning Sonya and Peter took me back to Nelson airport and I began my journey home.  A flight to Wellington, then a two-hour wait for one to Auckland and then a walk through the airport to catch the plane to Kaitaia.  With the weather warnings and a lot of wind and rain in the east of Northland, I wondered how we'd fare, but landing was straightforward, after an uneventful flight.  It's always good to be home! 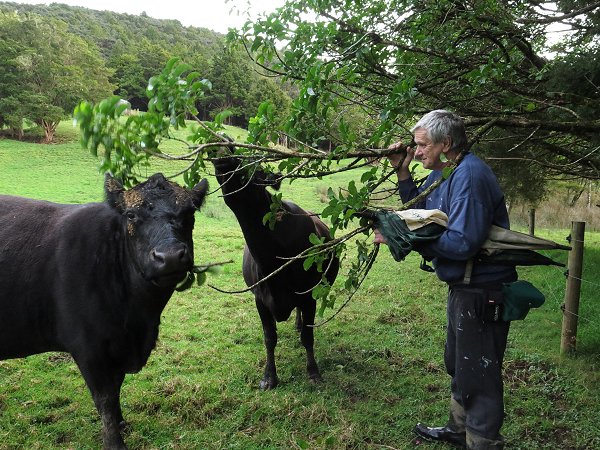 We went out for a stroll to see all of the cattle, finishing off with a walk into the Camp Paddock to make sure Zella and Imagen were happy.  Stephan held some of the low Puriri branches down for them to have a munch.

I saw Zella's calf moving around inside her.  It's reassuring to know there's one in there, since I didn't have any pregnancy testing done this year - haven't for the last three or so years. 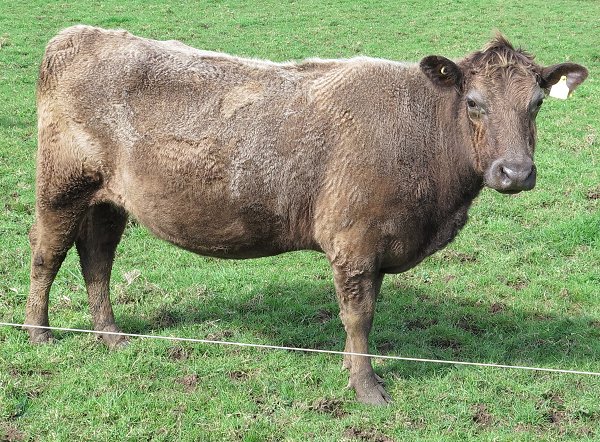 Endberly, holding condition ... not much more.

This is not the proper angle for cattle photography but I was trying to get her body in without the fence wires. 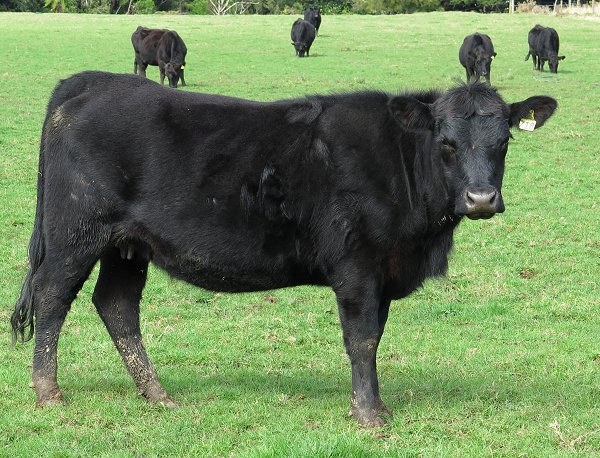 718, grand-daughter of 475 (shown last week).  These young heifers seem to be doing alright, just.  I'm moving them around onto as much new grass as I can. 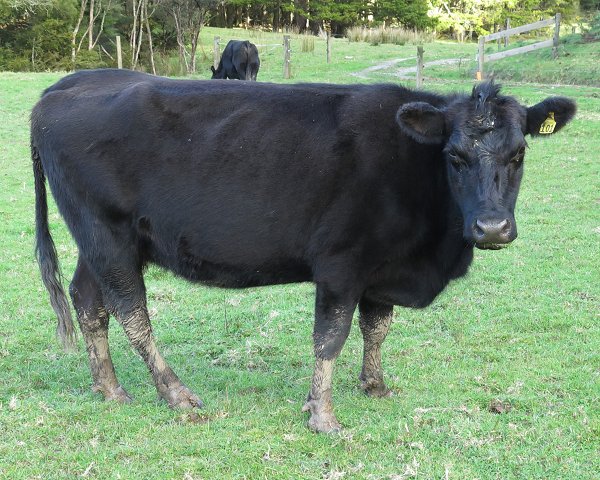 Dexie 101 is the thinnest of the cows.  She's now nearly four, so is not quite physically mature and could perhaps have done with another year with the younger heifers, although I think the cows have been fed just as well this winter. 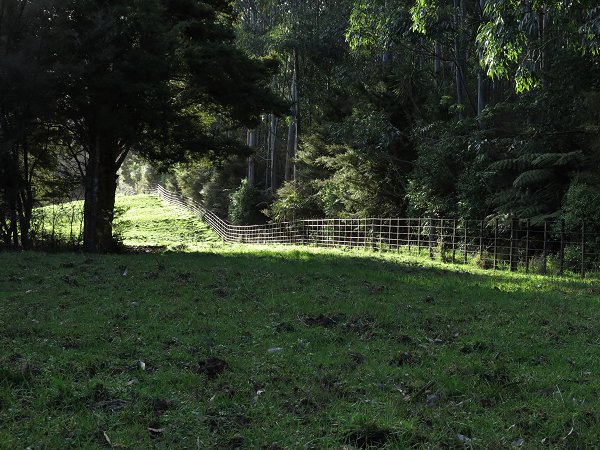 A good fence is a pleasure to see!  This is the boundary fence along the Northern boundary in the Back Barn Paddock.  It's been here for several years now but my attention was drawn to it by the sun glinting on the wires. 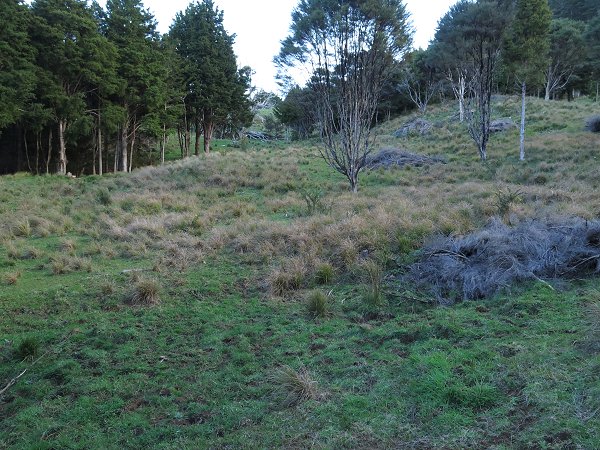 The first day the HelpX couple were here (three and a half weeks ago), Stephan took them out to the Middle Back to wipe herbicide on the Sedge plants.  It looks like it worked.

I hoped that getting a big area done would encourage me to go back there and continue the task. 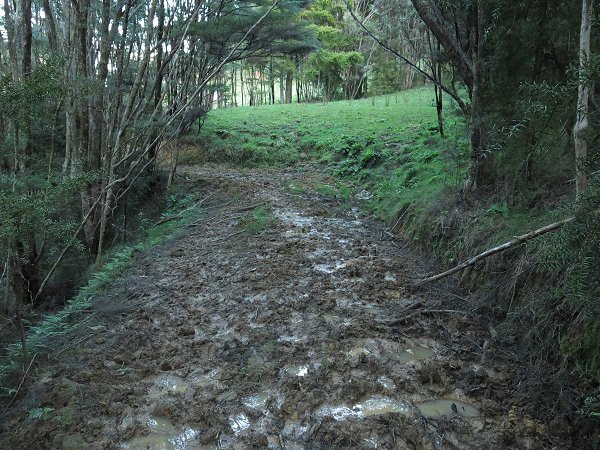 There's been quite a lot of rain this winter, but Route 356 seems to be holding up better than it often does.  This may be a measure of how much (or little) the track is being used and by how many (or few) animals together.

One day we'll get some metal around here.  Sometime before then we'll get a fence along its left side, at least, to protect the waterway which runs there.  So many plans.

Ultimately we want to fence both sides of the track to create a lane which allows direct access to the Middle Back Paddock, since currently one has to take cattle through this, the PW, the Big Back North, or the Back Barn paddocks to get there.

I counted the young heifers on the side of the PW hill this morning before leading them out and around the lanes to the Big Back.  As they came along the Bush Flat lane, I counted again to make sure they'd all followed and there were not quite enough of them.  I went back and there was nobody else!

Then I looked up the lane leading back to the flats and spotted a heifer where she shouldn't have been: 728 was on heat and had decided she needed to go under the spring gate across the lane to get nearer to the bulls in the Windmill paddock.  There was obviously nothing they'd have liked more than for her to be in their paddock.

728 should be pregnant, but slipped her pregnancy really early in the piece, back on 21 April.  I have no idea why.  In such cases, I presume a genetic issue in the embryo, since I'm fairly sure there's no infective cause in my herd.

Back then I wrote that 728 wouldn't get another chance, but I might wait and see if her mother has another daughter this year or not and then decide.

This morning Stephan and I drove up Diggers Valley, along toward Broadwood and then down into Pawarenga.  It was very beautiful.  Apparently there are four churches and four Marae and most of the population are related through four brothers.

When I fly out of Kaitaia on a clear day, I can always see this harbour inlet.

One of the churches is just to the right of the photograph. 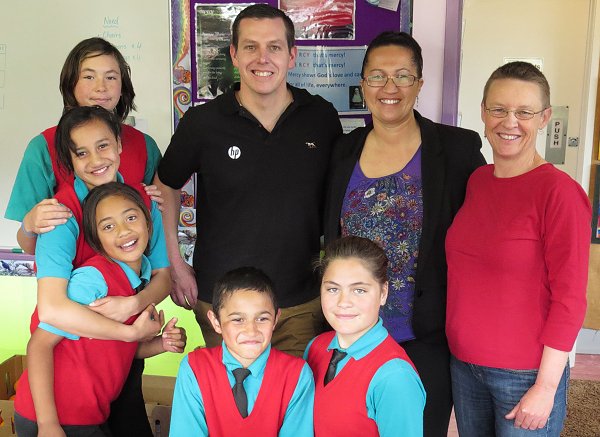 Stephan and I went together because these are the twelve days of my birthday and as Stephan didn't have to be anywhere else, he decided it would be nice to come with me.  I was going as an official representative of Rural Women New Zealand (RWNZ) to help judge the entry of Te Kura O Hata Maria to a competition to win some Hewlett Packard technology gear, a joint project between HP and RWNZ.

These are the children who created the video entry and their principal and teacher, Maraea Herbert-Pickering.  (Stephan took the photo.)  Antony (from HP) and I had to submit our appraisal of the school and their entry and a few days later, the results were announced. 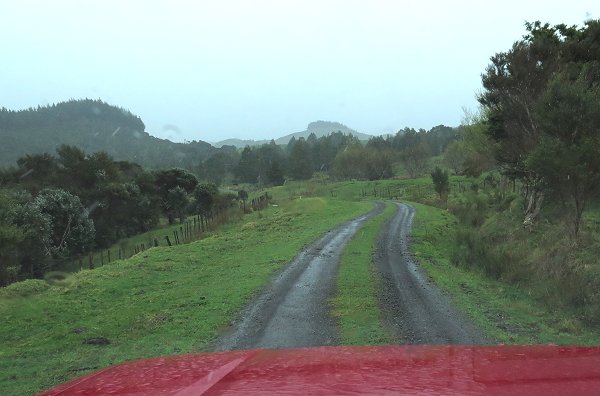 Afterwards, even though it was raining, we went for a tiki-tour down one of the side roads, just to see where it went.  We always tell ourselves that one day we'll do such things but rarely do; so, no time like the present.  We drove to the end of the road and then it obviously became someone's private farm track.

This part was, as far as we could tell, still public road, grass and all. 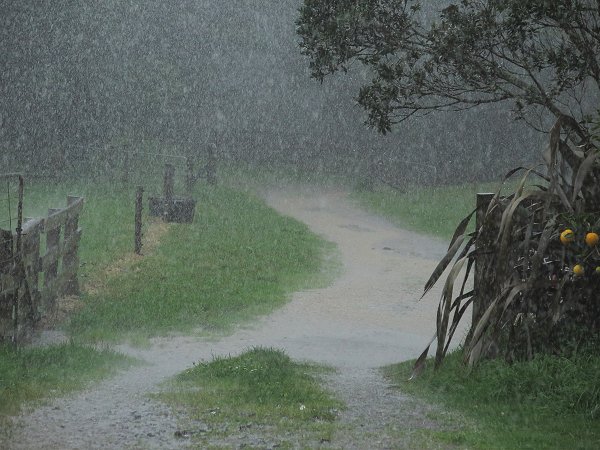 There was the most astonishing downpour this morning, along with thunder and lightning, but as it didn't last for very long, all that water didn't cause any problems. 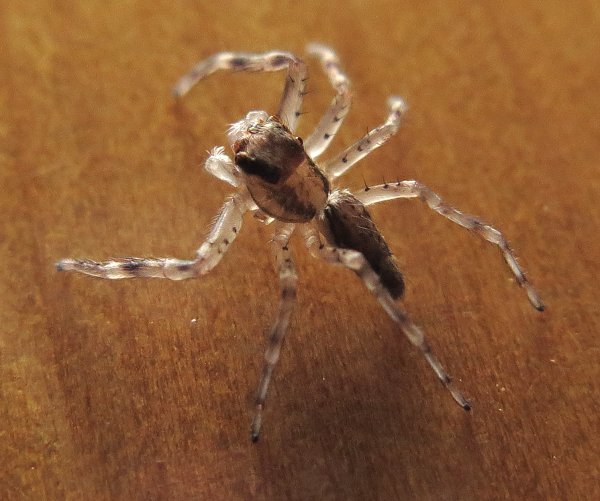 Sitting at the table as the sunshine re-emerged, I noticed a small movement beside me: this tiny spider, still so small it's legs were translucent.

I went out to check the pregnant heifers in the Back Barn and found that Gem 698 would let me scratch her rump.  It's not the first time I've managed to touch her, but she seems much less anxious about it now.  Meg 699 still regards me with absolute suspicion whenever I go near her.  I'll get her too, in the end.  It's just a matter of quietly taking opportunities to scratch them when such occasions present themselves - a group of heifers standing together and not noticing my proximity behind them, for instance.  I try and give all the heifers some tail scratching when they go through the race, if there's time, to demonstrate to them how pleasurable the sensation is, so that they'll be less likely to be startled by my touch out in the fields, more likely to remember that what's about to happen is extremely nice.