The week beginning the 5th of April 2014.
Saturday the 5th 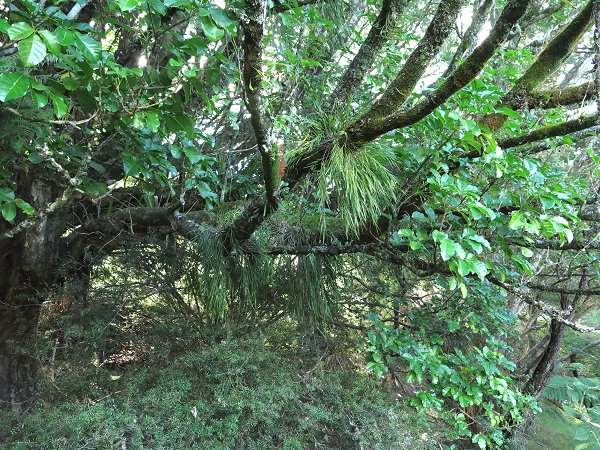 I took this picture to remind me to go back and check on the orchid plants growing on these branches (a Puriri in a gully Over the Road) next year.  Some of them look like the orchid I've only once seen flowering here, last year.  None of the plants look like they will flower this season.  Too dry, perhaps?

At last we seemed to be free of sniffles and both feeling well, so we went to the medical centre and had Influenza vaccinations.  No doubt we'll feel a bit off for a couple of days, but that's never as awful as really being sick.

Instead of getting on with my own work this morning, I spent a couple of hours dealing with someone else's animal out on the road - mostly to prevent it being chased or put somewhere I didn't want it, like our yards.  Had he arrived on the scene, it's owner would very likely have set his dogs on it and caused it to push through the electric tape which currently serves as part of the road-side fence and in with my mob of cows and calves.  I ran it back up the road to the paddock from which we deduced it had originally come, its mob having been moved along the road yesterday and it somehow having been left behind, perhaps in the bushes on the roadside through the carelessness of its generally irresponsible owner.  I get thoroughly fed up with the activities of that particular man.  He's caused us expense, worry and much time over the last three or so years, dealing with animals he's not bothered to ensure are properly contained where he leaves them to graze. 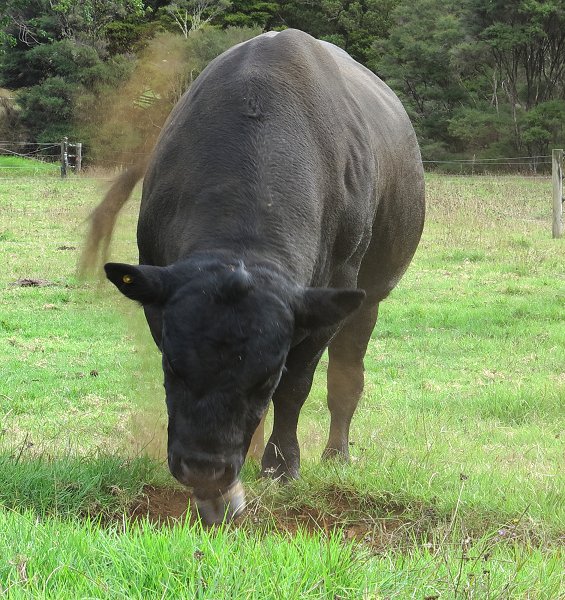 Senior bull 87 and junior 106 have been neighbours for a few weeks and today I decided it was time to put them together, so they're one mob, not two.  I wasn't sure if there'd be any fighting, hoped not ...

87 came through the gate, dug up a lot of dust in the hole he made last time he was in this paddock, sidled up to young 106 (who simply stood and watched him) then carried on over to the next fenceline, growling and huffing at 96 two paddocks away.  Funny animals.

87 has been a well-mannered bull throughout his life (he's now four and a half) and only fights with bulls inclined to fight, whereas some will fight with everyone - 96 would, for instance.  106 seems similarly placid, but is also a lot smaller than 87, so would be foolish to take him on.

I've kept 87 because I suspect he's producing some very nice daughters, which makes him a better bull than I initially thought he was.  I formerly thought he was a lesser animal than his two half-brothers 89 and Joe 90, but his one daughter so-far calved is the white-faced 714 and she's doing a lovely job with her daughter.  I'll keep 87 for another season at least, until I see what a few more of his daughters can do. 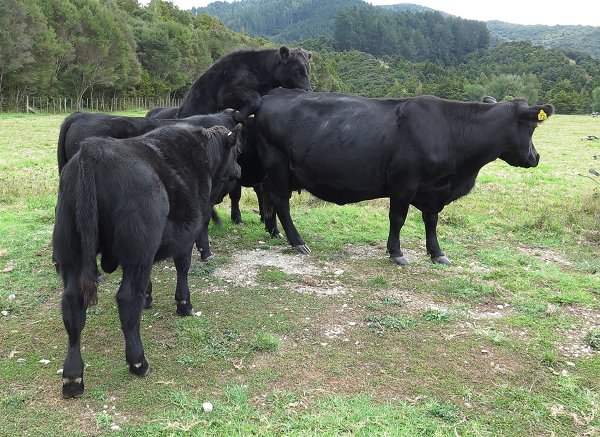 Those tell-tale saliva marks all over her back and the intense interest of most of the little bulls indicated that Athena was on heat today.  She is on my cull list, but should still have been pregnant, having spent quite long enough with the bull.

I am culling her from the herd despite being very fond of this last Isla daughter.  The possible link between Isla's seizures and the one which killed Athena's daughter, coupled with Athena's own troublesome behaviour at calving time, strike too many marks against her continuation in the herd.  I intend to have her son castrated by the vet (it's too late to do him by our usual method) since he's the full sibling of dead 117 and it would be foolish to risk breeding him, in case the seizures are genetically linked. 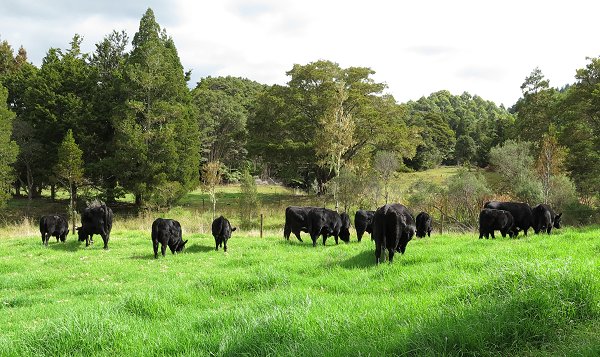 The Kikuyu is at its best, brightest green in the sunshine at this time of the year.  This is probably the best grass on the farm, out the back, where it's been growing with little bits of rain falling in the last few days. 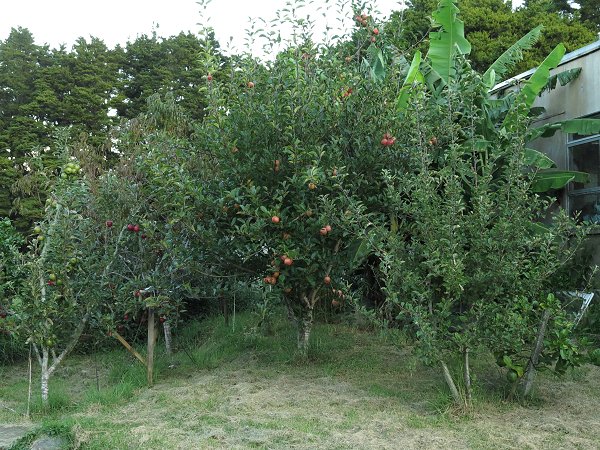 All through the summer I've meant to take pictures of the apple trees, but forgot.  They've fruited very well this season - all three varieties on the grafted combination tree we bought and the Sebastian apple had loads of fruit.  Sebastian came to stay with us during every school holiday when he was five or six and he and I planted some apple seeds from some apples we ate one day and one grew into the monster in the middle with most of the apples still on it.  (There are lots of pictures of Sebastian back in 2003 during one of his holiday stays.) 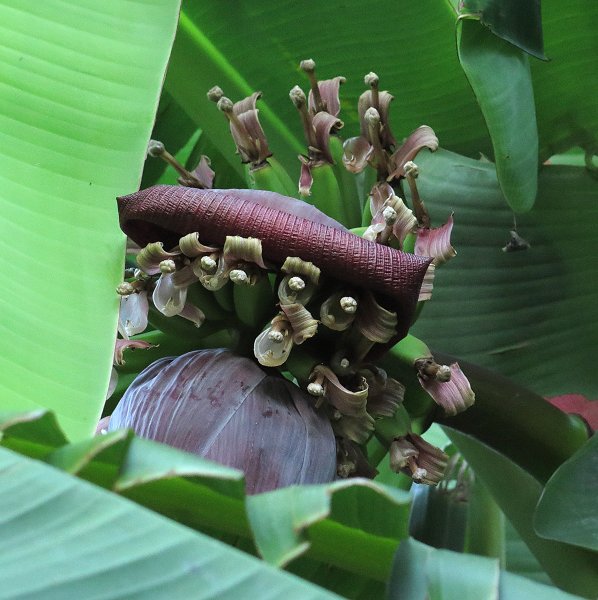 And YES, we have Bananas!

Bearing in mind the frost damage to these plants last winter, they have recovered and grown remarkably well since.  They're now all about three times the height they were then.  When he was able-bodied, Stephan would catch contributions from Imagen (who always lifted her tail before milking) and put buckets full of manure around these plants.  It obviously did them a lot of good.

When I was a child there were always banana plants around the front of the Motel at Coopers Beach, but I don't ever remember there being any fruit.  The plants seemed always to be the same size, too, so perhaps they weren't fed quite as well as these ones.  I've only eaten these sorts of bananas once, from some plants Jane has and they were definitely different from the commercial variety, extremely fragrant and very nice. 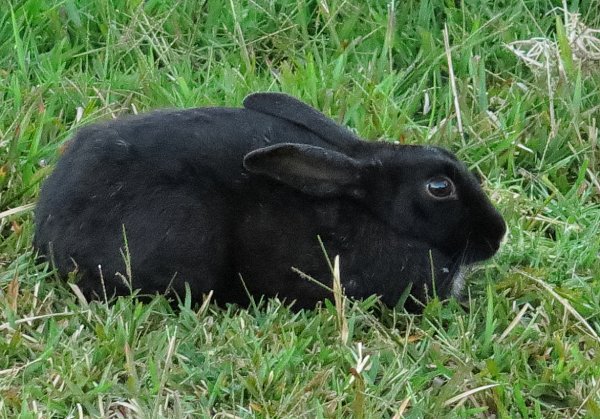 The black rabbit in Flat 5 hunkered down and pretended I couldn't see it this evening, so I was able to get a closer picture than last week.  Cute nose!