We had one of those horrid early-morning phone calls today, from Ella's mother, Debbie, telling us that other-mother Michelle had died during last evening.  Having been diagnosed with Leukaemia around this time last year, the last we'd heard was that all was going well as Michelle recovered from a bone marrow transplant.  Such news is terribly unsettling and we both spent the day feeling completely out of sorts.

I've known Michelle since my latter years in Auckland, when we were friends and it was that friendship which later led to our involvement in Ella's creation after Michelle met Debbie.

Stephan went out to do some fencing with Mike, who'd come to have a break from his usual activities and to give Stephan a hand.  I spent my day distracting myself, since I felt like doing little else, cataloguing budgies. 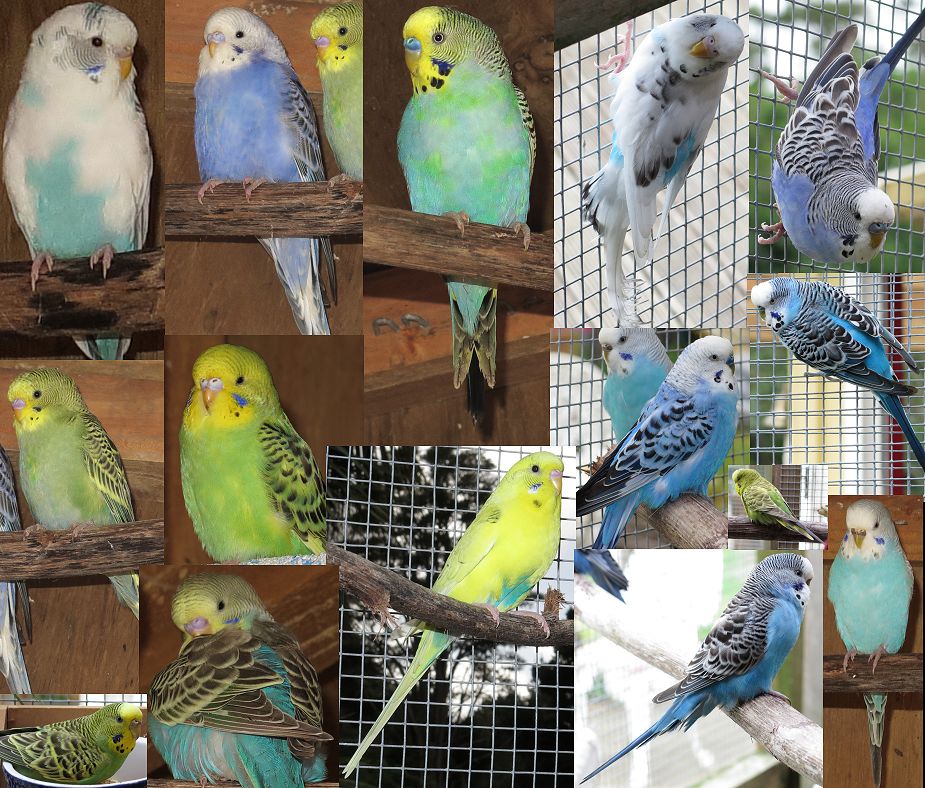 These are most of them.  There are several yellow-faced green birds, one with a grey influence, two or three yellow-faced blue birds, several different wing colour variations and four different shades of blue.  Several are just babies, which look like they're probably female and the stroppiest of them all is Loofah Equilibrium!  She argues with everyone. 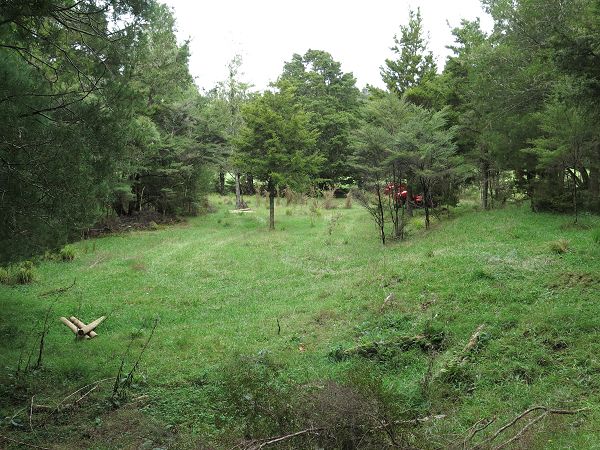 Mike helped Stephan advance the fencing significantly yesterday and today he was thumping posts around the stream down on the little flat area.  This is another of those nice little sheltered pockets which should become quite useful when we can get a bit of fertilizer and lime on. 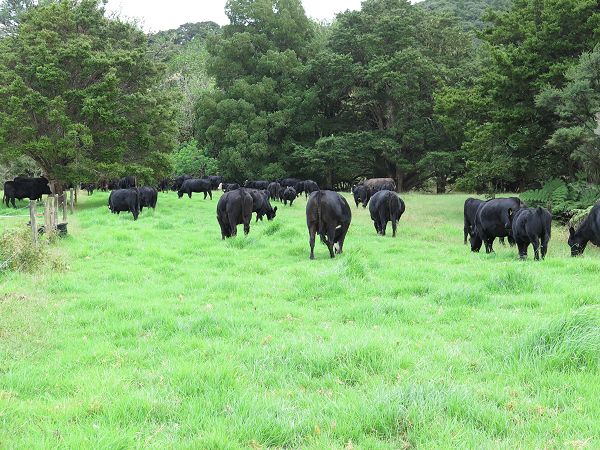 I put the cows and calves into the Camp Paddock, with lots of lovely grass.  There's a storm forecast and the night was windy and cold.  There is lots of nice tree cover in the Camp Paddock.

As soon as I heard confirmation of the date and time of Michelle's funeral I booked Stephan a flight from Kerikeri to Whakatane - the Kaitaia flight wouldn't have got him there early enough and I had planned to go to Kerikeri on Wednesday anyway.  We can't both go away and Stephan's necessary care for Ella in this situation trumps my friendship with Michelle.

Then when we were sorting paperwork this morning looking for some lost documents, I leant over my desk to pull some papers toward me and my back went "ping" in that frightening way well known to those with lower back problems.  What great timing.

Somebody has to milk Zella while Stephan is away and we'd already asked William if he could come and relieve me on some mornings, since I have a numb arm problem when milking; but now I would need someone to come every morning, if Stephan is to go at all. 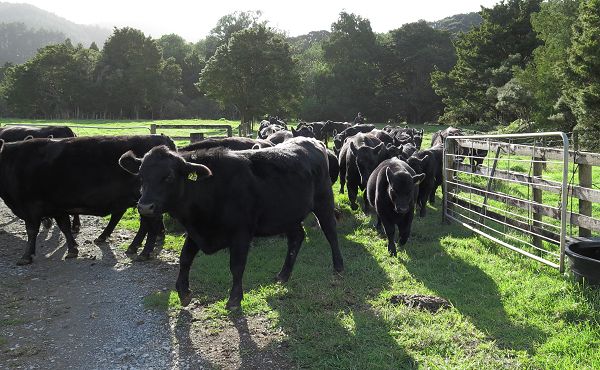 Late in the afternoon, drugged up with anti-inflammatories and having gently exercised my stiff back, we went in the ute to the end of the House Paddock lane where I called the cows and calves and Stephan followed them out of the Camp Paddock, on a move to the Spring, right out the back.  Thank goodness for lovely lanes along which one can drive so easily.  I could not have walked so far, nor flung a leg over my bike and ridden it anywhere.

We got up ridiculously early - I very nearly couldn't get out of bed and Stephan thought he shouldn't go away.  Stephan milked Zella and we processed the milk and drove out the gate by ten past five.  Fortunately the road conditions were excellent and we had an easy journey to Kerikeri Airport where Stephan boarded a flight to Auckland, leaving at 6.50am.

I kept a hot-water bottle tucked behind me the whole time, which made my back relatively comfortable.  The warmth certainly seemed to stop it from stiffening in the way it normally would when injured.  I couldn't walk properly or comfortably, but at least I was mobile.

Serge and Susan, who were previously in charge of Kaitaia airport, now run Kerikeri.  Serge invited me back to their place for a coffee, since I had time to spend before the beginning of my day's course.  It was lovely to catch up with them both.

Several weeks ago I enrolled in a course which was then postponed because of a lack of participants, but now had enough to proceed.  Run by the Agri-Women's Development Trust, the Understanding Your Farming Business course will run over four days through the next three months and is primarily aimed at beef farming women who are the partners of farmers, but I hoped there would be benefit for me in attending.  There is much I still don't fully understand about the financial measurements of success in farming, partly because I haven't felt the need to measure our success in that way.  The course is funded from the levies I pay as a beef producer.

There were several women I knew, including someone who was a childhood neighbour, whom I've met in the mean time but neither of us had then realised who the other was.

I spent the day refreshing my hot water bottle which I kept between my back and the chair.  The day was unusually cold, in the grip of the unpleasant southerly airstream, so the hottie was comforting for that reason too.

Friend Peter came this morning to milk Zella for me.  I am very grateful; there was no way I could have milked her myself, since it's currently hard work just moving around! 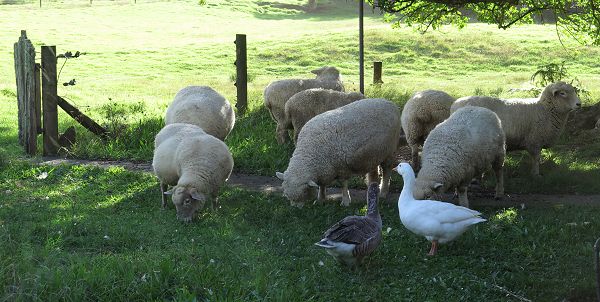 I had planned to move the sheep, but that would have meant walking around more than was comfortable, so I opened the garden gate so they could do a bit of long-grass lawn trimming, since the geese haven't been keeping up with the growth.

I get by with a little help from my friends ... This morning William came to milk Zella, before his last day of work.  He hadn't milked for twenty or more years, but was as fast and productive as Stephan!  My experience with Zella is that if one milks her too slowly, she stops letting her milk down and it doesn't matter how much longer you carry on, there's nothing to have.  I can't milk her fast enough to get a full bucket, but William did. 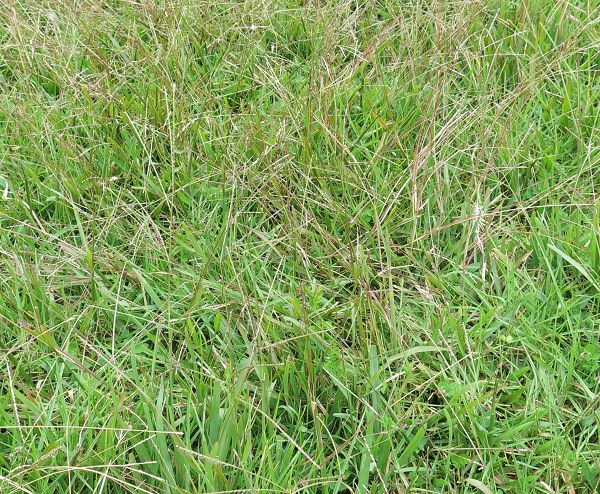 I learnt an interesting thing today: I have long thought this was Buffalo Grass, but it is actually Narrow-leaved carpet grass, Axonopus fissifolius.  It grows in some parts of most of our pastures, anywhere there is a fertility deficit. 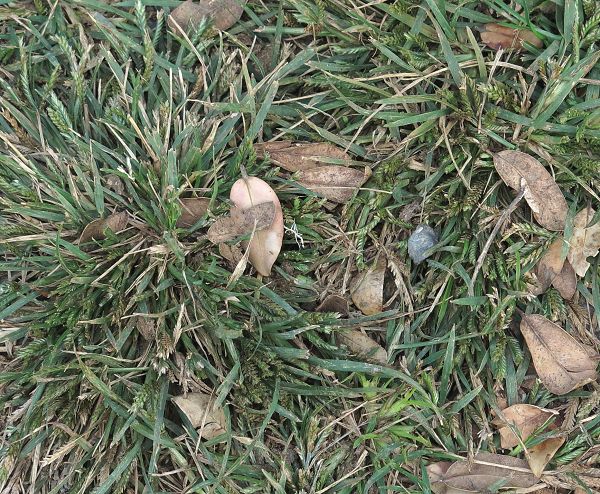 This is Buffalo Grass, Stenotaphrum secundatum, which grows primarily in stony, drier places, mostly on the tracks.  The cattle really like to eat it but it's not a productive pasture species.

Looking back to this time last year, one of the striking things then was the amount of fruit on the Kahikatea trees; this year there's hardly any at all.  It was a poor year for the edible fruits too, few peaches or apples being produced on our cultivated trees.