I feel we've run out of grass.  While that's not entirely true, in that the animals are not without anything to eat, there is no longer anything ready-grown ahead of them.  This always happens sometime in August and that it has not occurred before now is thanks to a conservative approach to stock numbers this year.  We all hold our breaths now until the temperatures warm sufficiently for the grass to get going again faster than the cattle can eat it  I hope it isn't too long a wait; I don't want them to lose condition. Stephan has been perusing and thinking about cattle yard plans for months.  He is determined we should have new yards and I've been busy and distracted and not paying the idea a great deal of attention, but it's time to get serious about it.  The yards won't be outside our kitchen window, but it was a good place to set the plan out so we could have a look at it all and walk through the spaces. 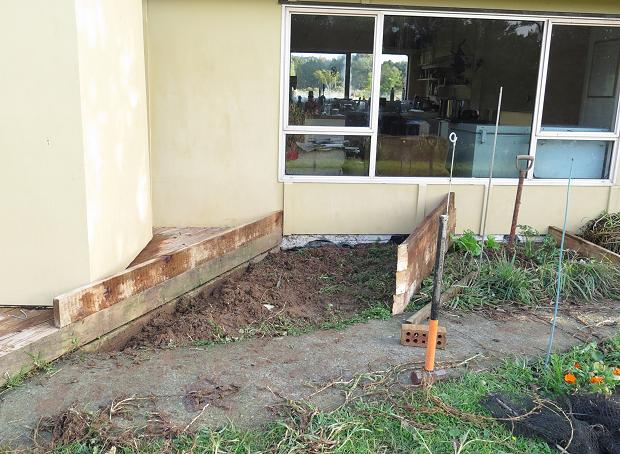 He's had other plans too, in this case for the garden.  The little vegetable garden plots are unmanageable, primarily because they are quickly overgrown by Kikuyu and the only way to really control Kikuyu is by endless attention to very deep weeding, or with the use of glyphosate, which one would not wish to apply to food-growing areas (at least one doesn't if one has control over one's food sources!)

So he came up with a plan: build some raised garden beds in which to grow green vegetables.

The budgies are very entertaining at present, all gearing up for the breeding season.  We dug out some more nesting boxes and put them in the aviary and the birds have all been busily checking them out, trying to work out where to settle.

It took me a while to figure out what's probably going on here: Eco on top of the box appeared to be courting the white bird, but I think, from its behaviour with the yellow and green female in the box, that it's actually a male - the light-coloured birds don't have the usual colour distinction in the cere (the fleshy bit above the bill) which would be blue in a male and pink/brown in a female.  The lovely yellow budgie turned out to be male and it looks like this one is too.  I think the other white bird (the one which can't fly properly) is female.

From some reading and some observation, the hen birds only let their partners in to the nesting box and the green bird certainly lets that white one come and go freely. 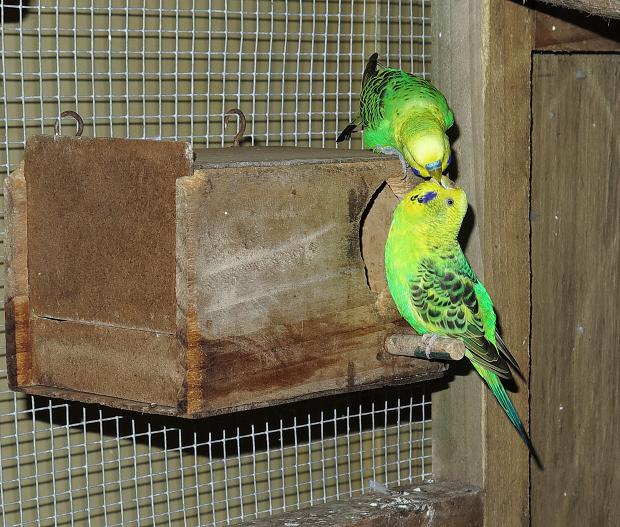 Other pairs are much more obvious.  These are two of the birds which arrived as juveniles in April. 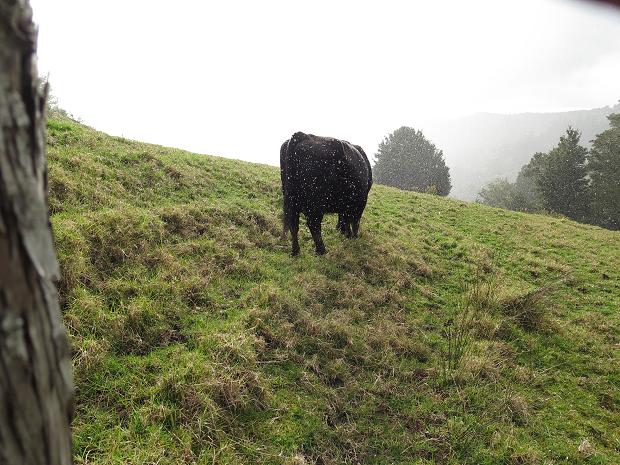 I walked up the hill Over the Road to check on the twelve cows, with a brush to tend to their tails.  As I brushed Dinky 94, I noticed several calf kicking movements on her right side.  That's the first calf I've seen move this year so far.

Then it rained for a while, so I stood under a tall young Totara, the sort which provides surprisingly good shelter from rain.

The garden construction is progressing.  That chicken won't get too many more chances to inspect this area! 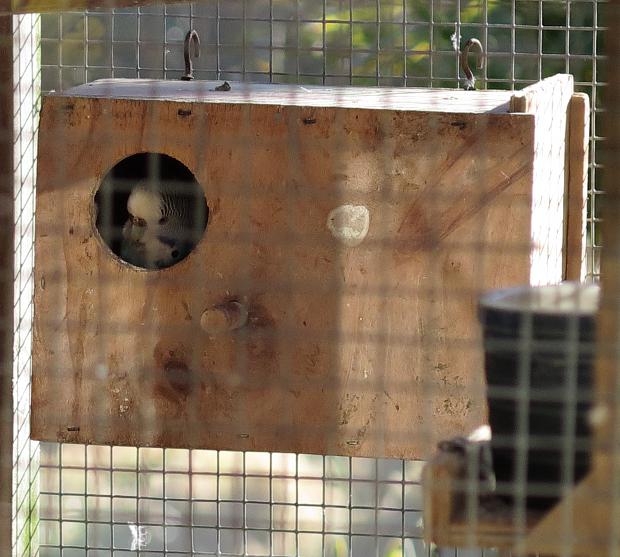 Loofah Equilibrium has claimed this box as her own and spends a lot of time inside.  If any other bird ventures too near she pops out, like an angry clock cuckoo and chases them away.  She's directly opposite my office, so I can see her from my computer chair. 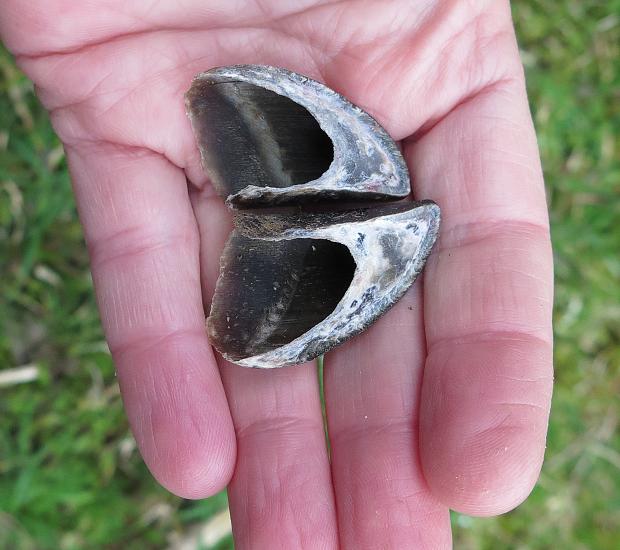 I had checked the young heifers and was walking back to my bike through part of the Spring paddock when I noticed these little hoof remnants in the grass.  I think they must be from a piglet, although there were no other remains nearby. 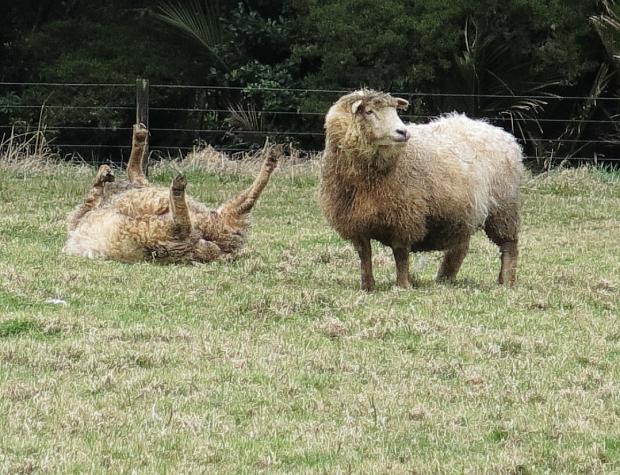 As I rode along the lane toward home I saw two ewes on their backs but fat ewe on the right thrashed about violently until she got her feet over enough to stand up.  Her sister is never as determined. 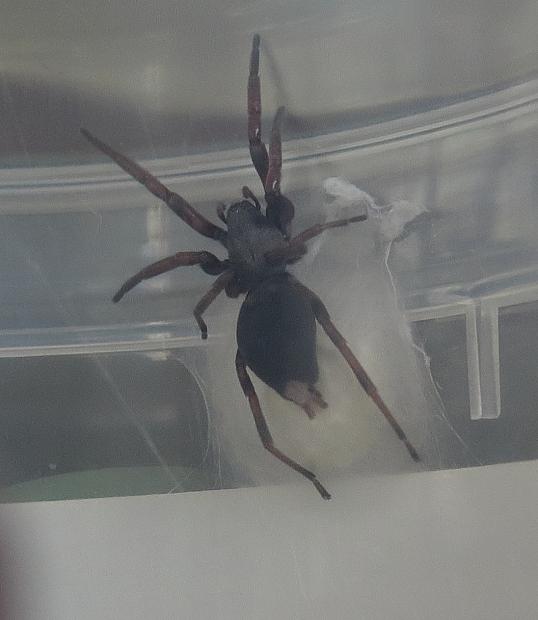 The scary Whitetailed spider has laid eggs and is now guarding her nest.

I don't know what to do with her, so I've left her in the container.

We spent the morning hanging pictures around the house.  They've been sitting stacked against walls and in piles in strange places since we brought them home from Jill's apartment.  It was fun putting them up, somehow makes things seem more homely.  We're not very homey sort of people, both happy enough if we're comfortable and warm, but it makes a nice difference to our environment. 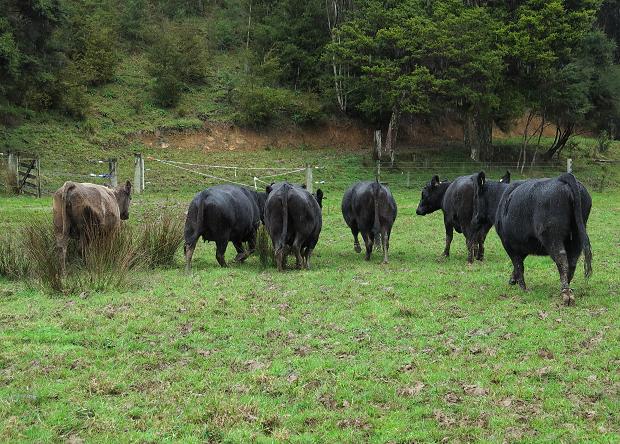 In the afternoon I went walking in the rain with my umbrella, since riding the bike would have been uncomfortably damp.

I had let the older heifers graze the Blackberry paddock with access up into the PW yesterday, but half of them were still standing around there with nothing to eat, so I pushed them through the gate. 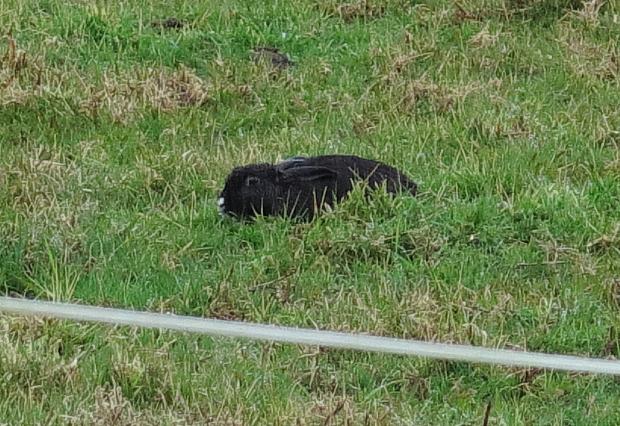 Little black rabbit, posing for an annual photograph - there's one in the page from last year too, coincidentally.

We were expecting Jorja and Imelda to come up for the night from Auckland, but they had to postpone their visit.  We'd promised them a ham dinner, so Stephan had taken one out of the freezer on Tuesday evening and they'd not phoned until Wednesday morning, so we couldn't put it back in the freezer and had to come up with another dining plan.  We invited two other couples to come to dinner this evening. 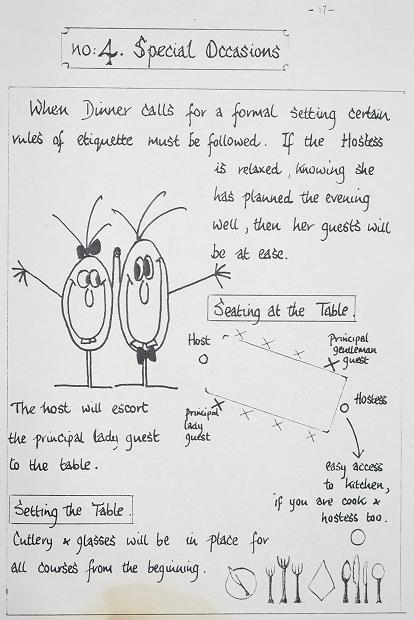 We have a book we fondly call the Loopy Cookbook (real title Cooking for Entertaining: A Course in Ten Lessons), a booklet written by Jill sometime in the early eighties, to accompany a night-class she taught in Cordon Bleu-style cookery.  Jill was an acclaimed chef in the two restaurants she ran and many of her former guests were keen to learn some of her secrets and recipes.  Rachel was still at home at that time and illustrated the booklet with cartoon characters she called Loopies.

The premise of one of the lessons is that husband has just announced he has invited the boss for dinner at short notice and clever wifey will pull together a sumptuous feast without getting into a flap.  It's very much of its time and very funny.  There's even a seating plan (as pictured) showing where to seat the principle lady and gentleman guests!  As a child I remember my parents having quite a few fancy dinner parties, while we were put to bed early.

Since we were doing dinner à la Jill, I decided to get out the former-restaurant china and the restaurant cutlery I'd managed to rescue from Jill's place.  It was all rather a lot of fun.

The first course was Walnut Soup, a stunning yet simple dish, followed by the glazed ham, garnished with slices of our own pineapple (one of the plants I got from godfather Hack produced a small fruit recently), followed by Crème Brûlée for dessert - and coffee in china cups and saucers for those who wished it, around the fire afterwards. 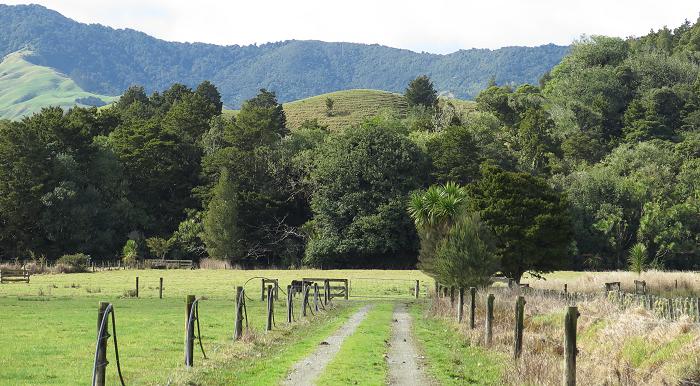 Looking down the Windmill track toward Flat 1.

We have frequent rain showers, but ground conditions are relatively dry for this time of year.  It's far nicer this way than when everything is soggy, but it may have implications later in the year if we have a dry summer and the ground water levels are lower than usual.