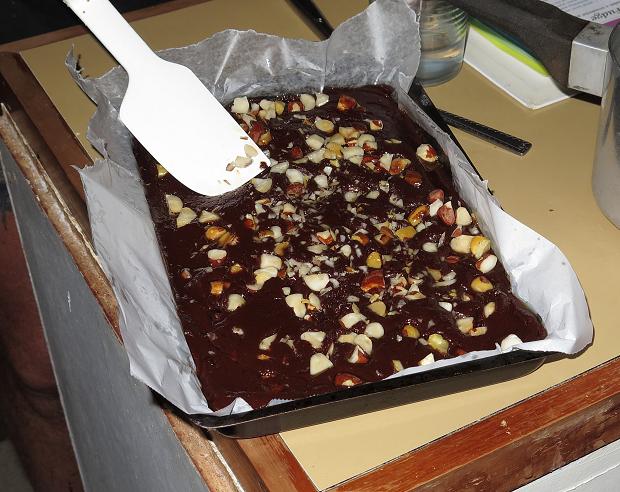 After the base was set with Brazil nuts pressed in, the chocolate topping went on.

When it was set and being cut up (all this is done by Stephan, of course) quite a lot of it was sampled.  Delicious! 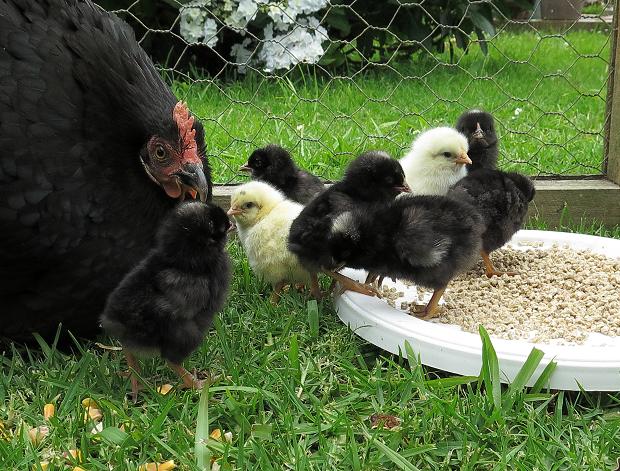 The little chicks all seem healthy and active today and as Stephan had forgotten to buy Chick Starter Crumbles for them yesterday, we went in to town.  We rarely just 'pop in to town' for a single forgotten item but there being something else I particularly wanted to purchase, we went.

Throughout my childhood most households I visited had Sodastream machines - devices to carbonate ordinary tap water to make fizzy drinks (soda, I think, if you're North American).  Neither my family, nor I as an independent person, ever owned one.  But as a current sufferer of frequent headaches, which are interrupting my normal consumption of alcoholic beverages, I decided I'd like to be able to make special drinks for evening pleasure when I can't drink wine.

The few days before Christmas are always interesting times to be in town, with everyone on the crazy hunt for things to buy for other people who often neither need nor want them.  Some on-line research had discovered the item I required on sale at a popular chain store which we, on principle, rarely visit in Kaitaia, its presence having contributed to the disappearance of many locally-owned small businesses.  In an attempt at joining in the spirit of rampant consumerism, just for a few minutes, we went for a wander around the store (which has very recently moved to bigger, new premises out at the North end of town) but quickly lost interest.

In the evening we went for a Christmas family gathering with Elizabeth and William with two of William's siblings and some of the children, whom it was a great delight to see there.  They'll all be away over Christmas so we'll be alone and our pond will be empty of excited swimmers.

Today was also my fifty-first conception anniversary, something I like to celebrate each year.  While most people seem unwilling to consider the thought of their own conception, since it involves considering their parents in ways they'd rather not, I quite like the idea.  Jill and Brian were married on the 19th at St Andrew's Anglican Church in Mangonui and then, as far as I understand it, went off to Waitangi for their honeymoon, which probably wasn't very long, it being nearly Christmas and Father having the motel to run and two teenage sons at home - Grandfather must have run the motel in his absence; he and Granny lived next door.  I was born a week short of nine months later. 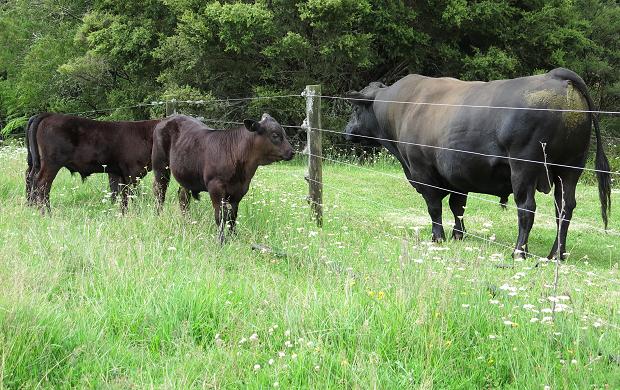 Bull 87 is still with Zella and Imagen in the House paddock and some of the calves from the other mob were quite interested in meeting him.  He's sire to some. 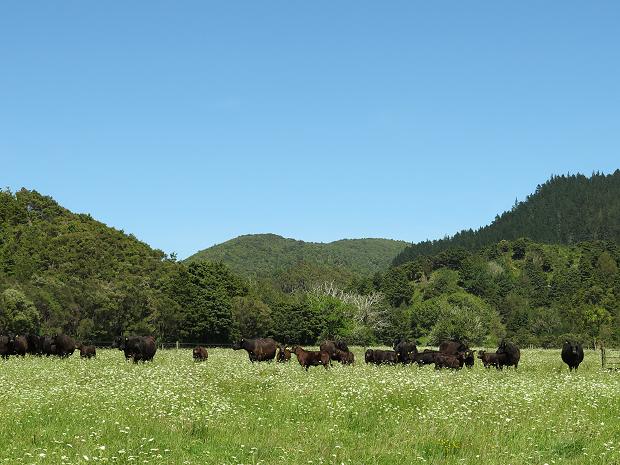 On this increasingly warm, still, clear day I had to move the cows and calves out of Flat 5a where there is only the old truck canopy to provide any shade - not enough for more than a couple of the adults at a time. 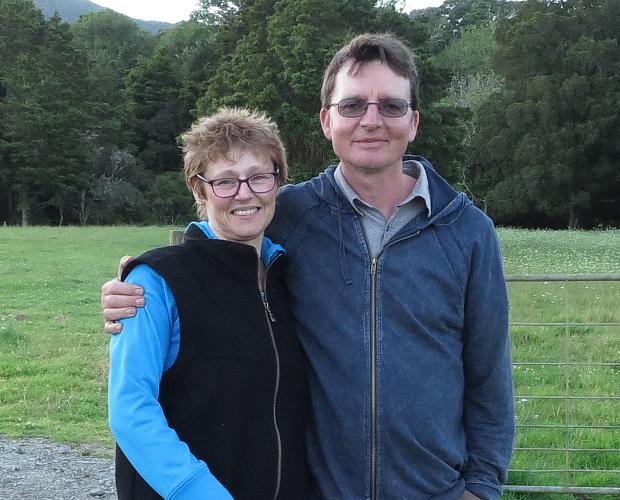 Mike and Chantelle came out for a leisurely visit, as they prepare to leave Kaitaia for a new life direction.

Chantelle, Mike and their three young sons came here from England in 2005.   Mike found this website when searching for general information about Kaitaia and the college, where he'd been appointed as a science teacher and he and I corresponded for a few months as they prepared for their move around the globe.  We all met in person soon after they arrived.

We have enjoyed a very nice friendship with them over the several years of their residence here. 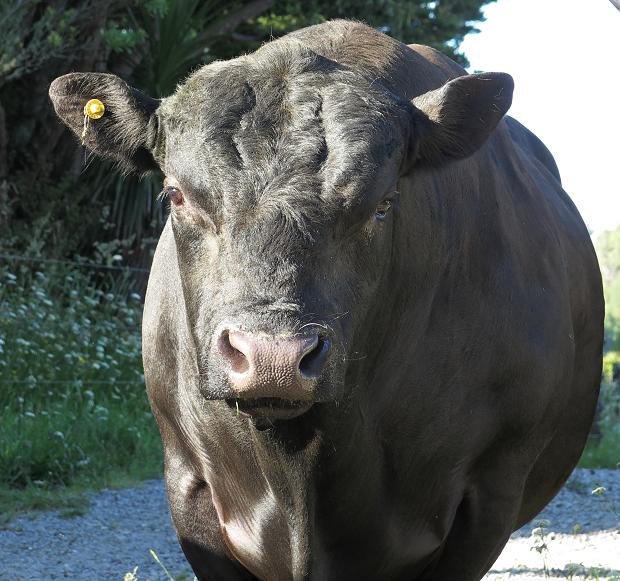 Mr 87.  He's such a well-mannered animal, despite his imposing size. 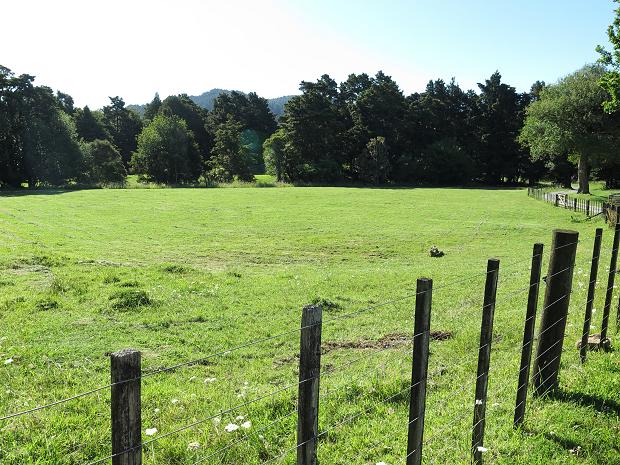 Stephan keeps mowing paddocks as the cattle finish grazing.  The grass grows really well after the tall weed flowers have been mown down; today the Pig Paddock out the front.

Whenever I look at this paddock, with its two or three little clumps of rushes still remaining in a wet area, I think about how it used to look.  A few weeks after that picture in 2003, Stephan mowed all the rushes down with the scrub bar and since then we have applied lime to the soil and weed-wiped glyphosate onto the rush plants to kill them.  The greatest effect has probably been that of the lime (Calcium) on the soil chemistry, making the environment less attractive to the rushes and better for the grass. 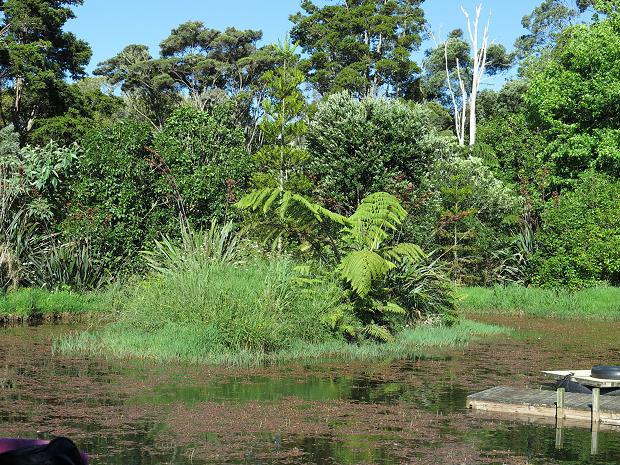 Pondweed has taken over the pond again which, if we were happy only to look at its prettiness, wouldn't matter; but for swimming it is undesirable.  Stephan got all tied up in it on one occasion and we don't really want to drown anyone in there.

The island gets prettier every year with the Kauri doing so well in the middle and the tree fern growing bigger all the time.  Pukeko regularly nest there and the frogs' croaking seems to be coming from that area in particular. 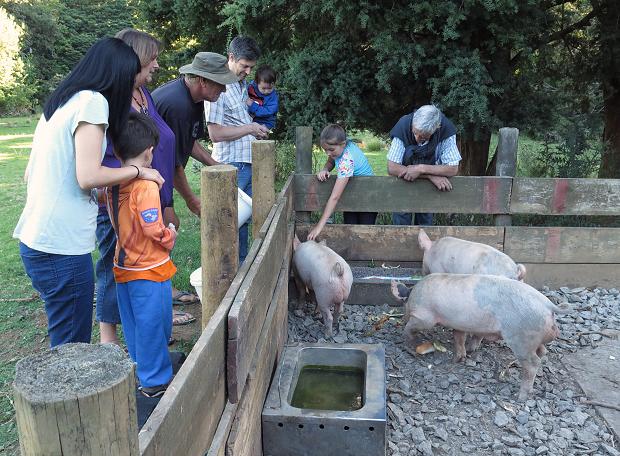 Emma came out to visit Wilbur - the whole family really came for some pond swimming with the children. 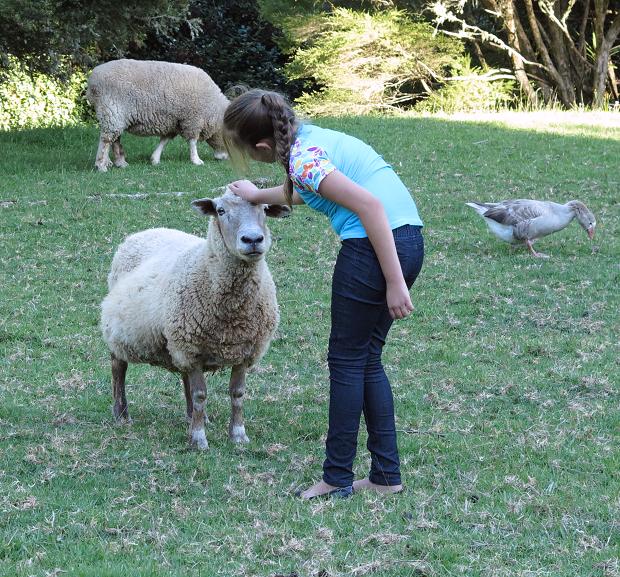 Emma learnt that a quiet approach to Dotty will yield more satisfaction than pursuing her around the paddock.  She and the other small children fed her some maize and squealed whenever she licked it from their hands.

Dotty is our only remaining tame sheep - the last bottle-reared lamb was never encouraged to maintain a close relationship because we had intended her for the freezer, not the long life she's so far had.

Old Madam Goose continues her quiet life with the sheep.  Her eggs didn't yield any excitement so presumably she had no conjugal delight with the gander.  I thought there might at least have been that much contact between them, but it would appear they have almost completely ignored each other.

I was woken at 5.13am by the alarm, leapt out of bed, threw on some clothes and walked quickly down the drive and over to Jane's to drive her up to the airport.

There's now only one flight each day, going south early in the morning (6.20 departure) and returning sometime in the early evening.  This is a sensible minimum service for Kaitaia, allowing anyone who needs to get to Auckland for a day's business to do so for the whole day and get back again after close of business.  The pilots stay up here overnight.  There are still threats that the service may be withdrawn altogether if it is not supported because so many people still travel to Kerikeri to catch the Air (Not) NZ flights because they're cheaper.  Some value their time and convenience less than others, perhaps. 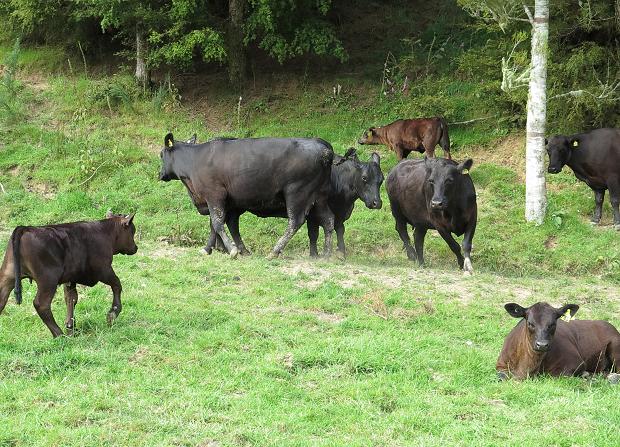 This is good to see: cows on heat before the mating season begins.  They're nearly all in very good condition so it is not surprising that they're returning to fertility already.

Those on heat are circling each other in the picture, getting into the best position to mount whichever of them will stand still.  It must be a very tiring experience, with all those irresistible hormone-induced urges!

Surprisingly one of these was two-year-old 742, the last heifer to calve this season.  Getting heifers back in calf for the second time is always a bit of a challenge but this year's heifers are in excellent condition.  I managed them really well through the winter, it would seem, despite my own doubts at times. 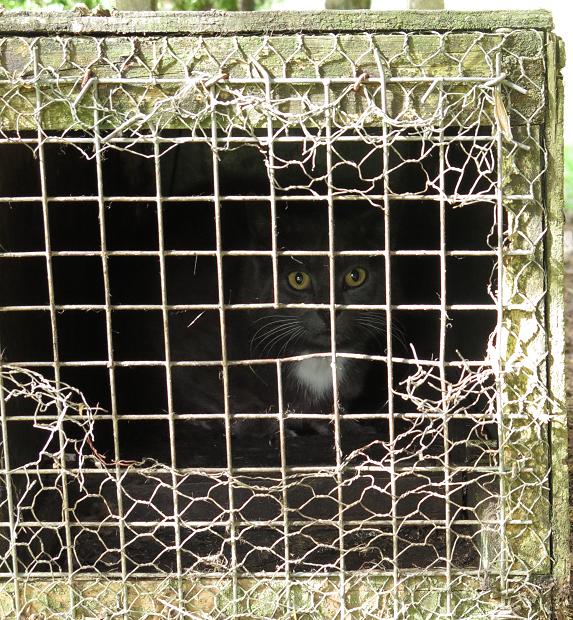 This is the first feral cat we've caught in a live-capture trap at the back of the farm.  I saw one run across the track near the Back Barn paddock a week or two ago, so we set this trap nearby and now success! 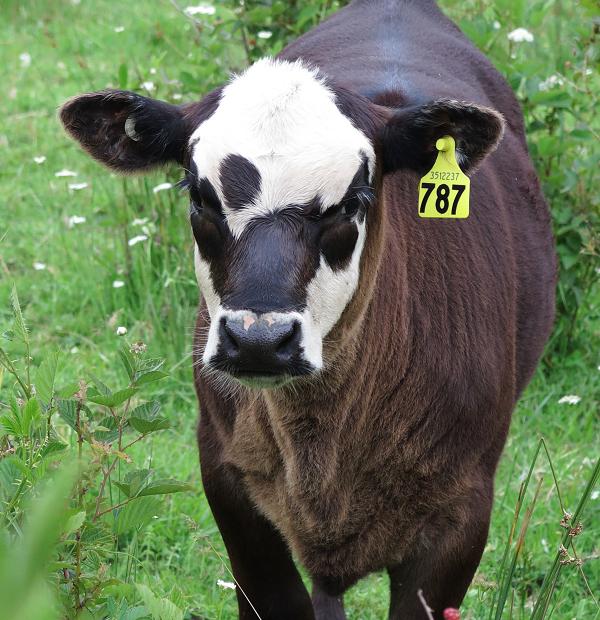 There have been several occasions lately when I've looked to take her picture but she was not in a fit state.  White faces get seriously grubby because of all the creamy milk the calves drink and the way a calf sort of snuggles in to her mother's udder when she feeds, smearing milk foam everywhere.  The milk remnants in the hair then attract dirt and the calves look terrible until their mothers lick them clean or there's some heavy rain. 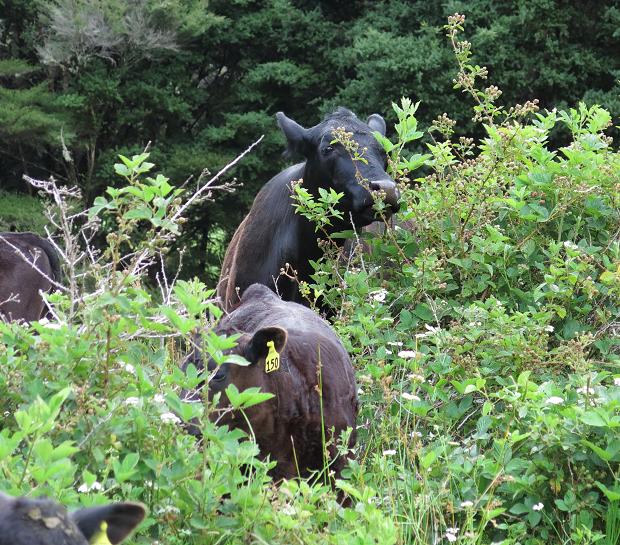 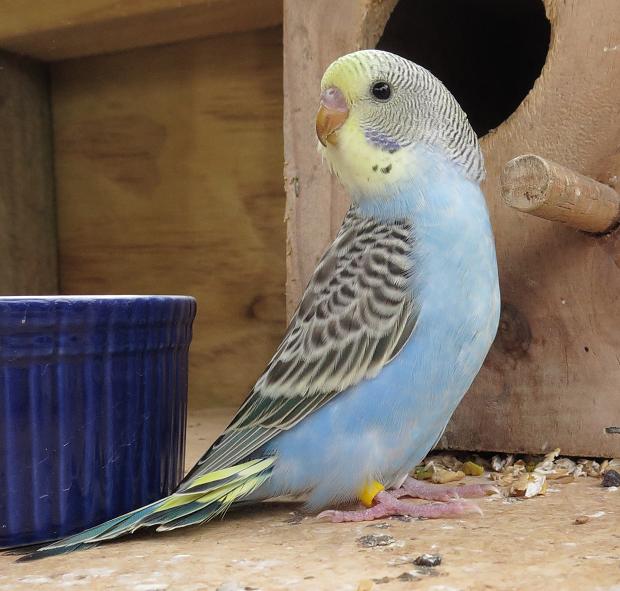 I do like the colours of this bird, just emerged for the first time from the nest box.

Collating my notes later I realised I'm confused about which parents it came from.  I think I put its leg bands on later than on its siblings and accidentally chose colours I'd used for another family.  I also confused myself by moving the birds from the old cage to the new one, so the chicks ended up emerging from a differently numbered box than the one in which they had hatched. 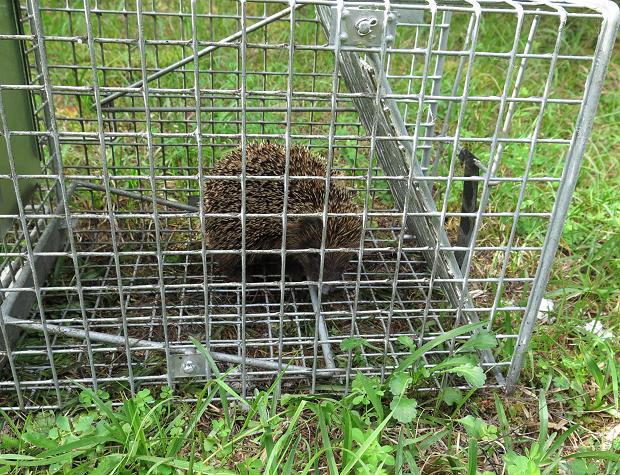 We borrowed a Magpie trap from the Regional Council again but catching hedgehogs is not the intention.  This one was a long way from home, out in the Spring Paddock where we keep seeing and hearing Magpies, so it got let out, free to live another day because I didn't want to have to go all the way home for the rifle.

Since we expected to be alone for Christmas, we went in to town to watch people enjoying their preparations for the day and to have a look for some more budgie feeding dishes.  At the Hospice Shop (which sells second-hand goods to raise money for the palliative care provider in our area) I tried on a number of items of summer clothing including, for a bit of fun, a few brightly-coloured swimsuits.  Sadly none were quite the right shape and size; I'd fancied striking a colourful dash down the slide sometime during the summer.

We also looked for a small radio to replace the old one we listen to in the kitchen, whose on/off switch and volume control have stopped working properly and as we looked, Gaye was trying to find room for a box she carried containing an item just donated, an espresso coffee machine.  $25 seemed reasonable so we bought it - Stephan had accidentally bought some espresso-grind coffee recently, so we needed a machine to use it.  Looking on-line later for reviews on the brand, I discovered they're a fairly expensive sort of appliance, something we'd not ordinarily have bought. 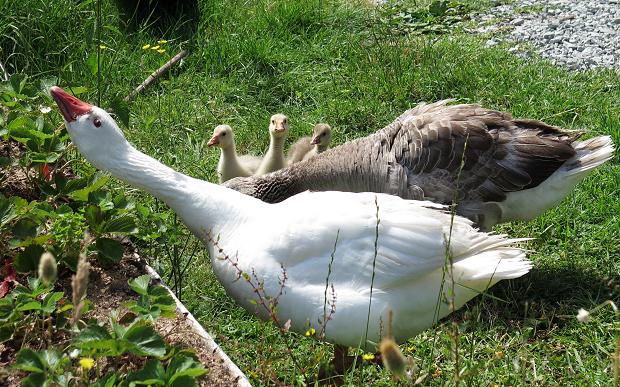 Risky behaviour, you'd think, a fat goose nosing around near the strawberries on Christmas morning!

We went out for Christmas lunch at the home of friend Gillian, having made contact yesterday to wish her a Merry Christmas.  The Renners have often been "rescued" by Gillian's family on Christmas Day, ever since the first year we were suddenly without Father and didn't quite know what to do with ourselves.  Before that our families had sometimes spent Christmas Day and parts of summer holidays together on our yachts, up and down the northland coast.

I think today Stephan and I were as much the rescuers, calming currents of family discord which inevitably emerge on this day of compulsory gathering.  It was nice to go somewhere and be involved in the day, which we might otherwise have spent picking Ragwort.

We're never too bothered about what happens on Christmas Day.  I've always found it an awfully fraught time with memories of many tears and far too much family tension which often overshadow my enjoyment if I'm obliged to take part in family gatherings now.  Stephan just likes being with me so is content with whatever we end up doing.