It rained; a lot - or at least some of the downpours were very heavy.  Stephan had taken a load of firewood to Kaitaia for a cold friend and was in town still at noon.  I rang where I suspected he'd be to suggest he come home immediately or he'd likely have to stay there.  In the end there was only 48mm in the gauge, but rather a lot of that fell within a couple of hours. 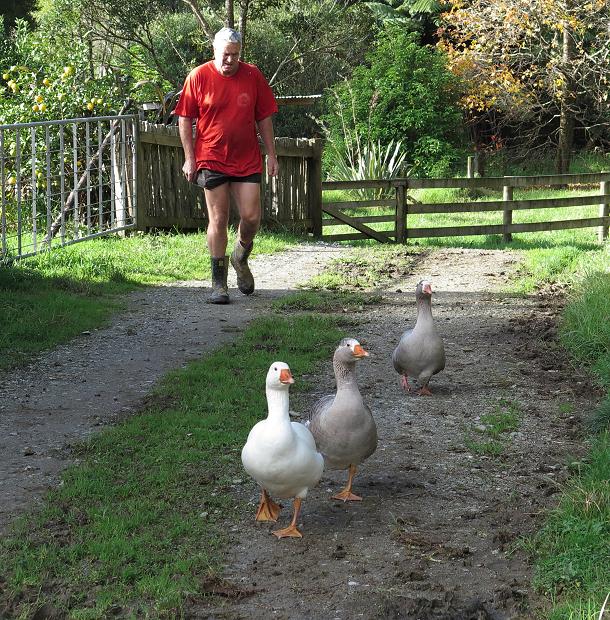 The sheep have been looking a bit unhappy in their usual area so the cows having finished with the House Paddock, we brought the sheep to graze it down further.

The Geese failed to keep up with their woolly friends.

The first time the two young birds honked and screeched at our movement in or just outside the house, we realised how much we'd enjoyed not having them quite so near.  But I'm quite keen on them retaining their living relationship with the sheep, so didn't want to leave them on their own where they'd been. 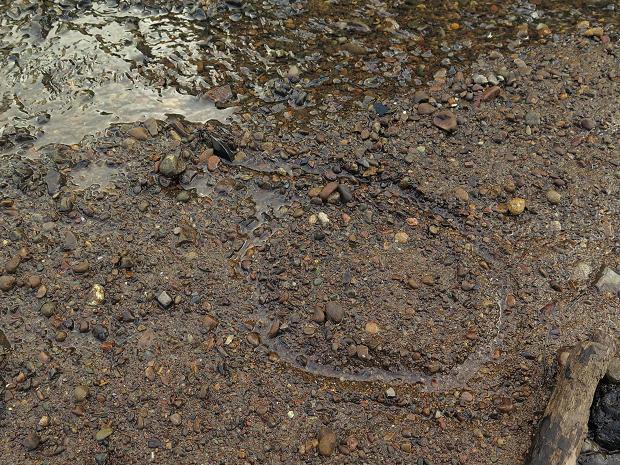 The streams out the back had obviously been up quite a bit.  This mussel must have been left a bit further out of the water than usual and its track to find its way back to the stream was clear.  It didn't seem to be moving much, so that circle of stony wake must have taken it some time to create. 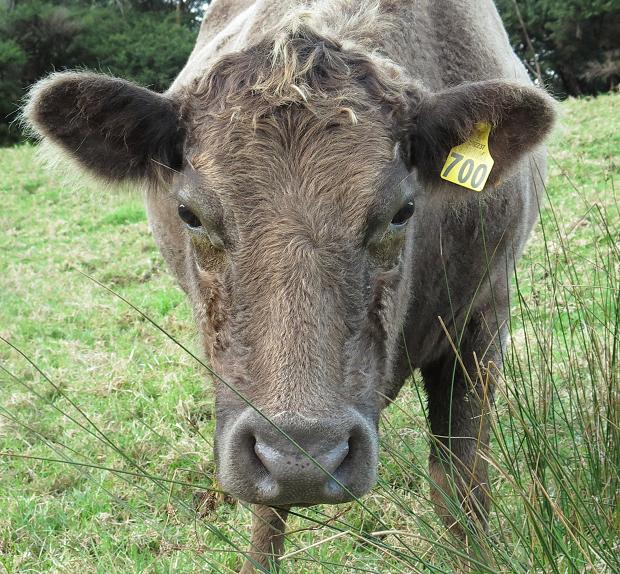 The older heifer group don't have a huge amount of feed left in the Spring, but seemed quite content.

When I looked at Endberly I realised how fluffy she seemed, having grown her winter coat.  Back in the summer she was very smooth-coated.

Stephan spent most of the day with Kees up at the shed, working on servicing the tractor.  Now we're out of the warranty period, we're not obliged to use the hugely-expensive technicians from the company from which we bought it.  Kees, after Topmilk closed, retrained and now specialises in diesel mechanics.

I did very little, feeling fed up with winter already.  My sisters phoned and said they were coming up to Waitangi for the night and asked if I'd like to go over and join them.  I booked a bus ticket, thinking it would be a nice little restorative break.

We set off early so Stephan could drop me in town for the 8am bus - which was late, not a bus but a van and driven by a maniac.  I asked him if he were alright at one stage, so erratic was his driving.  I was on the point of asking him to stop and getting out!  (The company has since assured me that they have reassessed his driving and that they're satisfied he is a competent driver.  I won't go by bus again, if I can help it!)  It was hardly the relaxed start to my mini-holiday that I'd hoped.

At Kerikeri we changed to a real bus with a real bus driver; it even had WIFI!  But that section of the journey from Kerikeri to Paihia, took less than twenty minutes.

In Paihia I found a very comfortable place to have coffee and continue my reading on soils, for which I will write a third magazine column very shortly.  I'm finding the subject utterly absorbing, but have a great deal to read before I feel I'll be able to competently write.

The Paihia Library was a delightful stop as I awaited my sisters' arrival.  In a tiny historic building, its collection is tucked into numerous small spaces.  It's part of the Far North District Libraries group, so I could have borrowed or returned books had I wanted to.

Jude, Rachel and Louie picked me up from the waterfront and we went for lunch at a restaurant along the road.  The waiter was personable and attentive and a credit to his profession and employers!  Good waiting staff make a huge difference to the experience of a meal out, I always find. 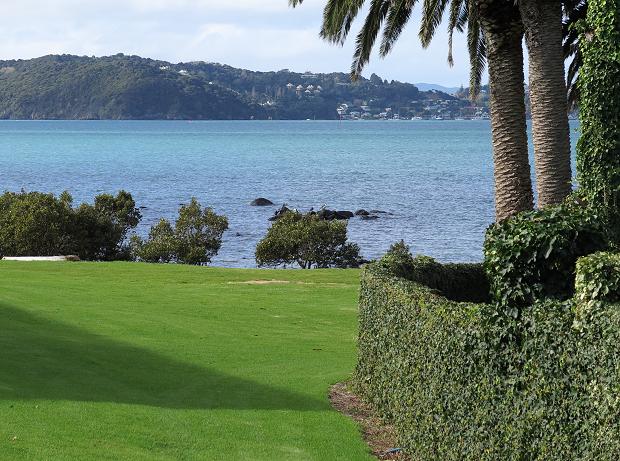 Jude and Rachel had booked us into the Copthorne Hotel next to the Treaty Grounds and this was the view from the room Rachel and I shared.  Stephan and I came here and stayed just along the corridor, at the end of the awful winter of 2008, after winning a night for two in a competition.

We all walked the short distance to the Treaty Grounds and the others went in.  Paying $15 irked me too much, especially without the inclination at present for careful quiet reading of the material within.  Besides, I am the owner of a now-mislaid 10-year ticket for free entry!  The reason the ticket is no longer in my possession is that in the mean time, about two or three years after I'd bought it, the admission fee for New Zealand citizens was removed.  I vaguely recall discarding the ticket at that time, although it may still be around somewhere.  Since then the policy has obviously changed again and I suspect I'd probably have to fight to have my ticket accepted in any case.  If I find it again, I might just try. 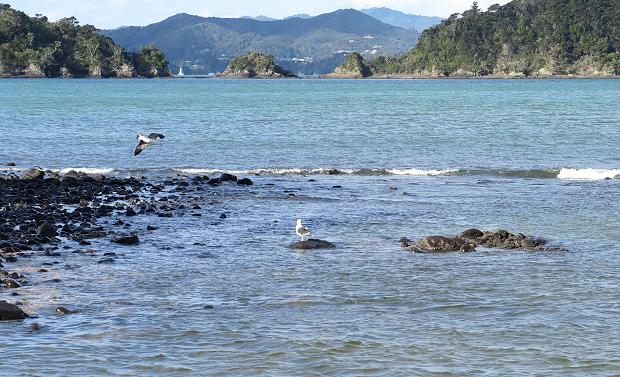 I went for a lovely stroll around the point upon which the hotel sits.  The weather was fine but extremely chilly and I was glad of my warm woolly hat!

There is a small wharf from which I took few pictures of the sea birds and the view. 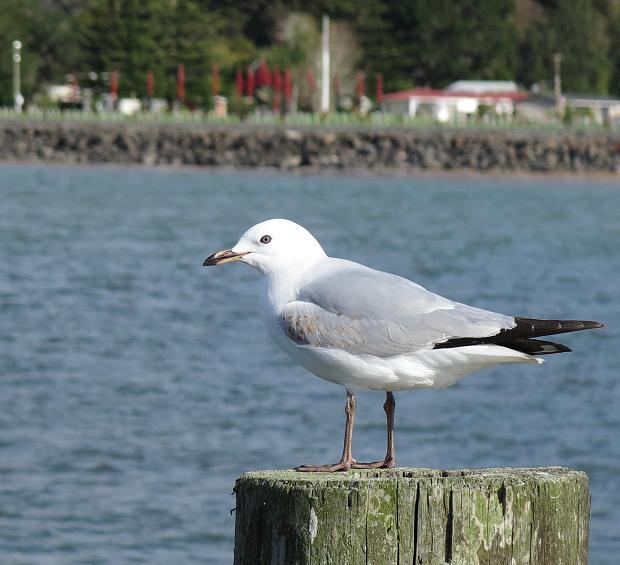 I have always liked seagulls, despite their sometimes disgusting scavenging habits.  I was, quite early in my seagull-appreciating life, exposed to Jonathan Livingston Seagull by Richard Bach.

There were continual calls from Oystercatchers on the beach over in front of Te Tii. 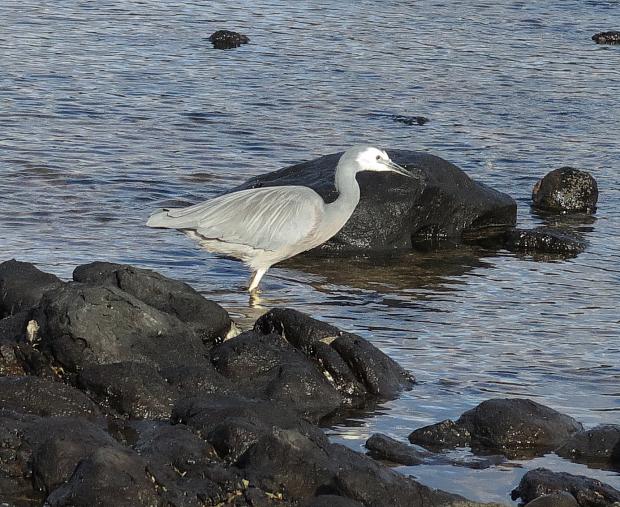 Amongst the rocks around the point, a white-fronted heron stalked its prey. 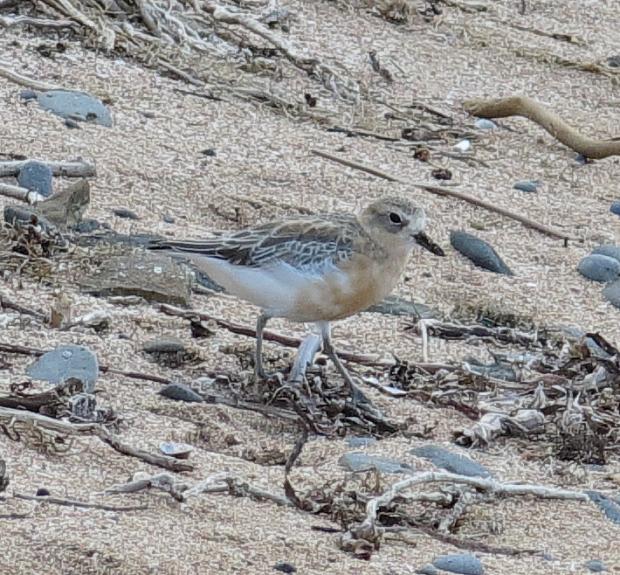 Back around in front of the hotel, there were three Dotterels on the beach.  Two were quite highly coloured and the third looked likely to be a juvenile, presumably their one remaining chick from their last nest.  This bird seemed determined to distract me, behaviour very much like that of the male Dotterel at Hohi back in January - Hohi is just a few bays around toward the northern end of the Bay of Islands. 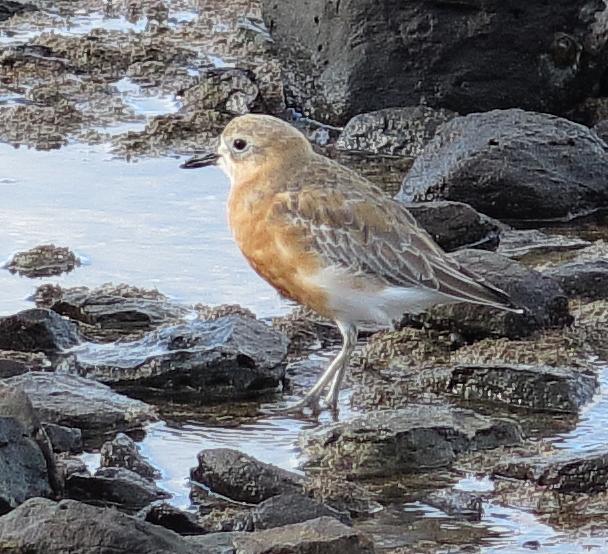 The more colourful of the two birds.  I realised I took no pictures of the third, mainly because it was always at a greater distance across the rocks. 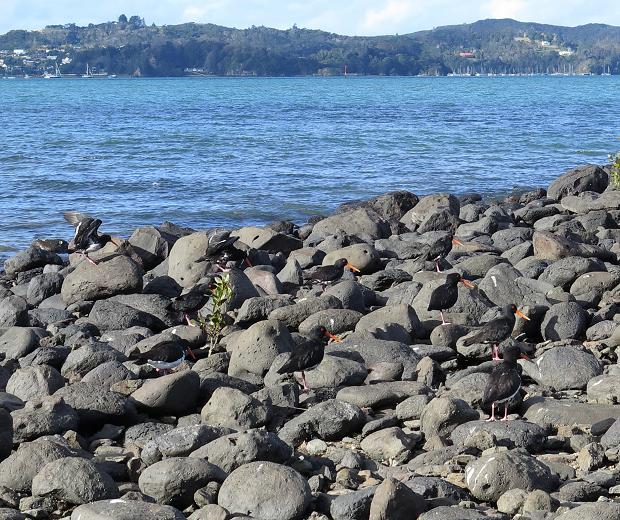 I sat for some time out on the rocks, watching these Oyster Catchers as they sat around doing about as much as I.

Dinner at the Hotel's restaurant could have been better - the Angus steak I chose was of excellent quality, but I strongly suspect the waiter mixed mine and Rachel's which were cooked to different extents.  The only time anyone passed to ask if all was well was when I'd just taken a mouthful of food and I failed to attract attention thereafter - and by then we'd waited some time for our meals, my youngest sister preferring to eat her steak well-done.  I was hungry, ate my dinner, wished it was better, told the waiting staff when she eventually stopped with us again at the end of the meal that I had been disappointed, but received not even a word of acknowledgement.

I have never got to grips with the etiquette of making a dinner complaint and the issue is often complicated by one's companions' discouragement if they can't stand the perceived embarrassment of dining with someone not immediately satisfied.

The others dropped me along at Paihia just before noon and I caught the bus again, back to Kerikeri, where the other bus was again late, but at least this time it was a bus.  The same driver as yesterday paid as much attention to where the centre line was - I always think of it as Braille driving: running along over the cats-eye markers, so you know you're on the line.  But Intercity tell me all's well... 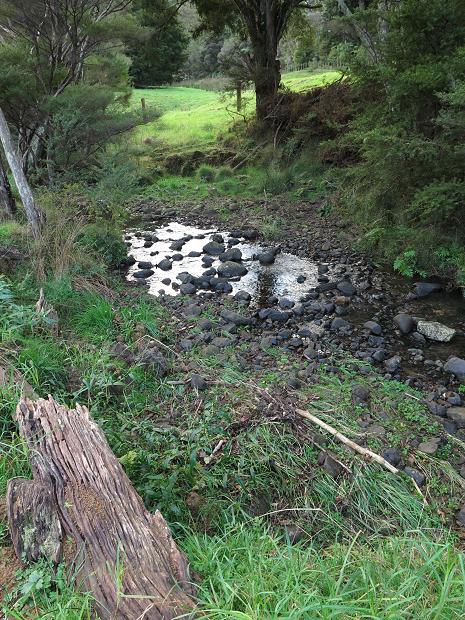 Out checking the heifers in the Spring, I noticed the former crossing through the stream is beginning to recover.  Without cattle feet continually disturbing the soil between the gravel and the paddock, small plants which colonise such areas are growing. 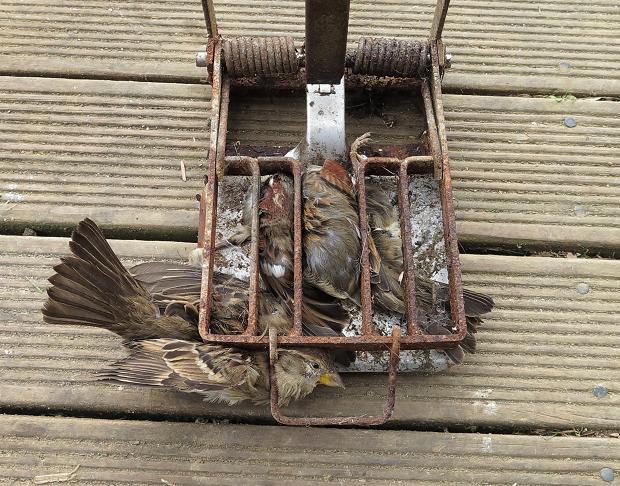 Not quite the target species; this trap is supposed to be trapping mammals which eat birds, not birds themselves.  There are sparrows all around at present, since they discovered we're a good source of food.  The undoing of these two was some maize in the trap as bait for a rat, since the rats continually make holes under or around the chicken cage and carry maize away if the hens don't eat it all.  They wouldn't have known what hit them!