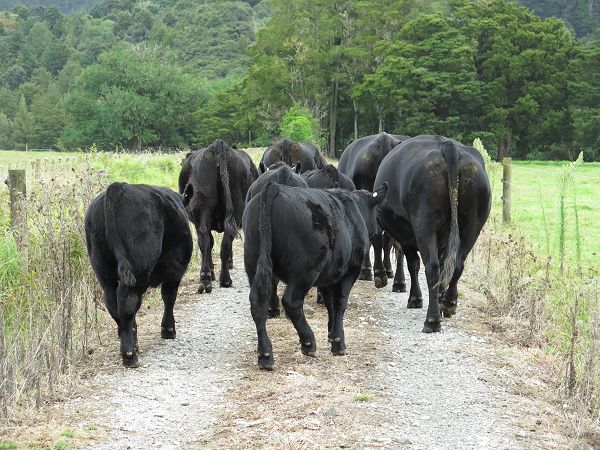 The cows with bull calves are just a little mob on their own now.  Here they're heading off out the back to the Back Barn Paddock. 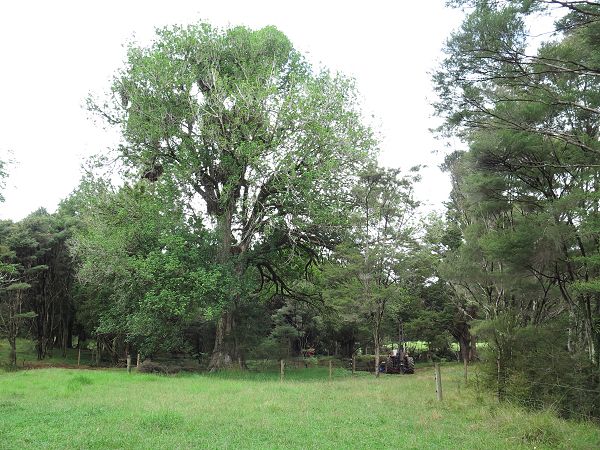 Stephan is finishing off the fence on this side of the stream through the Frog Paddock, this bit now the Swamp East.  We (him physically, us in discussion) moved a couple of the posts which provided a protective area around that huge tree to give it a bit more root protection and there are now gates on either side of the stream.  All the paddock needs now is a trough. 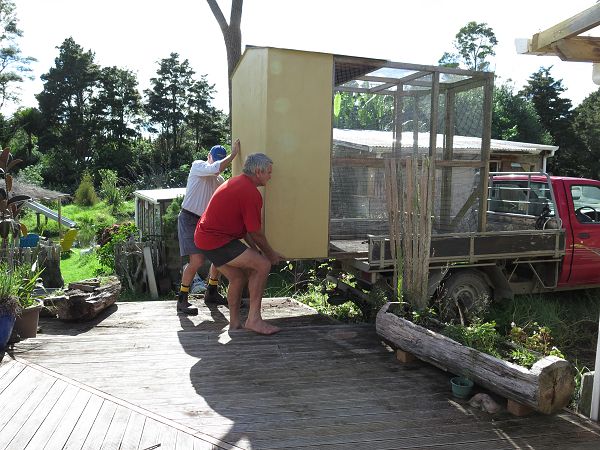 William and Elizabeth came to collect firewood.  Before they went out, William and Stephan moved the aviary from the middle of the driveway to the deck, where we decided it should be.  It's not light. 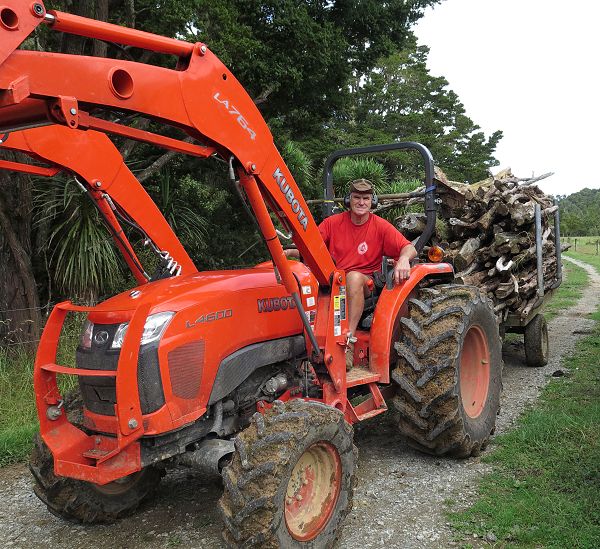 A big load of wood from the Middle Back paddock.  Some of it goes into the shed to stay dry and lots gets immediately cut up with chainsaws and goes home in William's trailer.

The shed is full of such wood, awaiting cutting into fireplace-sized lengths.  This is a luxury I enjoy to the full.  I spent two very cold winters in Auckland before I came back up north, when I was studying full-time and trying not to spend much money, so only bought small amounts of wood for my fire.  To now have an efficient way of burning the highest-quality wood without any practical limit to its supply is something I never fail to appreciate.

The aviary being set in place, I installed several perches (flax flower stems), a couple of plants, a big bowl for bathing (if they ever choose to use it), food and water and then the three budgies.

They had a great time flying around in their increased area, although Loofah with her damaged wing had a few falls and I had to put a couple of extra perches in which would provide ways for her to climb up the sides and get on to the higher perches.

I left their old cage in the bottom and in the evening caught them and put them back in there so I could cover them for the night.  I didn't think they should be left out in the cold without some acclimatisation over a few nights. 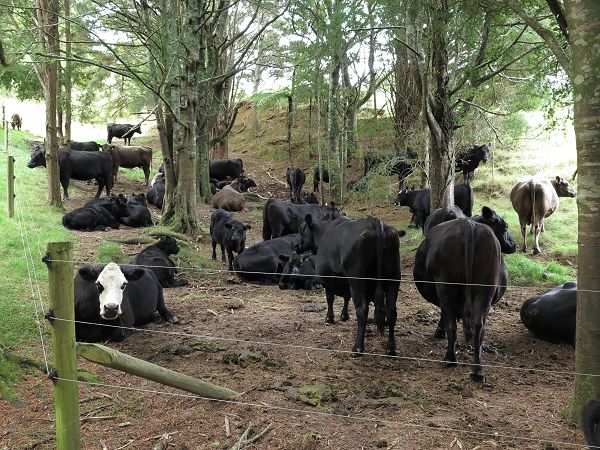 The cows always enjoy sitting here under the big trees.  When we fenced the reserve (in which I was standing to take the picture) we deliberately left this area as much intact as possible for the cows to continue to enjoy. 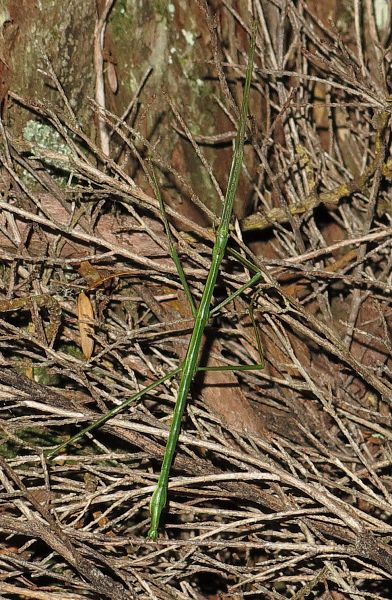 Out in the Back Barn I was sheltering from a shower beneath a Totara tree and had to look twice to work out what the stripe of green was at the base of the tree.  I suspect this stick insect would have been slightly less obvious if it had paid attention to the orientation of the sticks on which it was standing. 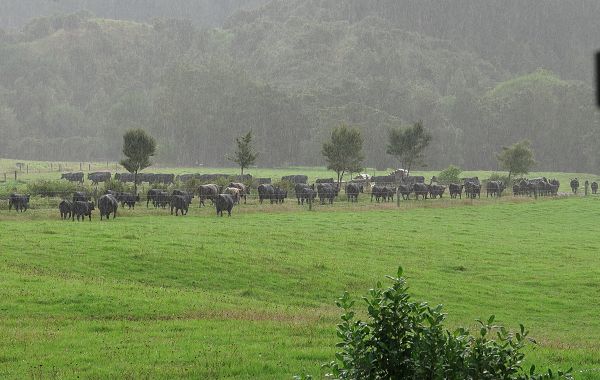 The cows weren't very happy Over the Road and since we have other plans tomorrow, I decided we'd move them late this afternoon - and then it rained, so I left them to walk out along the lanes on their own for a while, before following them and closing gates. 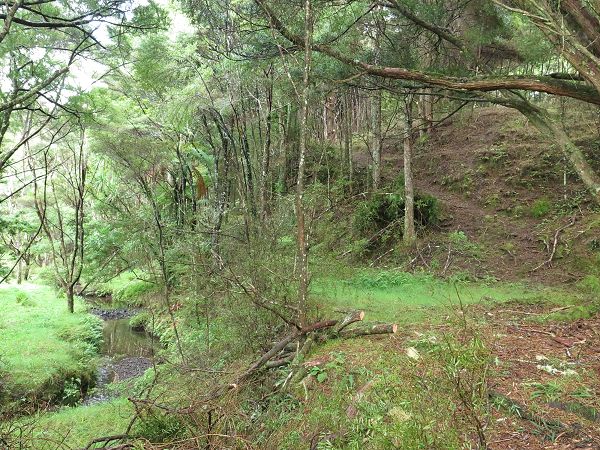 We had a fencing consultation early this morning, working out where to fence this side of the Small Hill stream so as to include a previously-grassed area which is now completely covered in tall Kanuka, but which might again be cleared.  We plan to join this with part of the Pines Paddock, since this end of the Small Hill will be divided from the other end and the Pines will be divided down its central swamp. 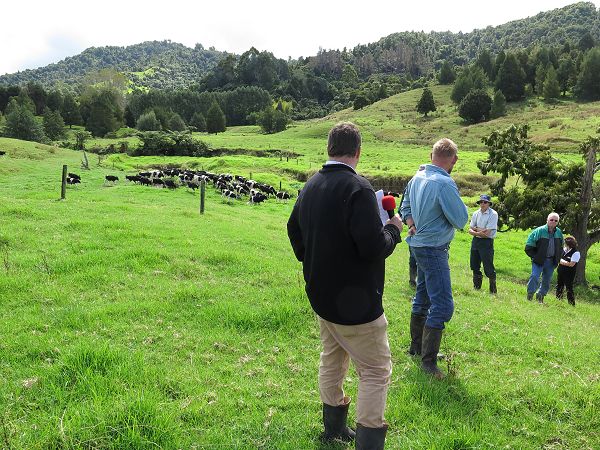 As forecast rain began to fall we had an early lunch and set off for Otangaroa, over the other side of the Maungataniwha Range, to attend a field day at Jeff and Helen's place.  The day's topics were Kikuyu management, growing young cattle and Theileria, the current favourite disease for field day discussion.  By the time we arrived the rain was bucketing down, but the first part of the afternoon was held under cover anyway.  By the time the talking part of the proceedings were completed, the rain had stopped and it was very pleasant to be out in the fields for the rest.

Just before the end of the day and in time for the barbecue and drinks, the National Party's by-election candidate arrived.  Good timing.  He didn't seem to say much to anyone - or at least he didn't seem to be making much effort to "press the flesh" with all who were there, which was surely the point?  That missing charisma still hasn't joined him on the campaign trail.

It was lovely to catch up with Helen and Jeff again, whom we've not managed to see for several years.  Jeff and Helen were my first-ever bull buyers, back in 2004. 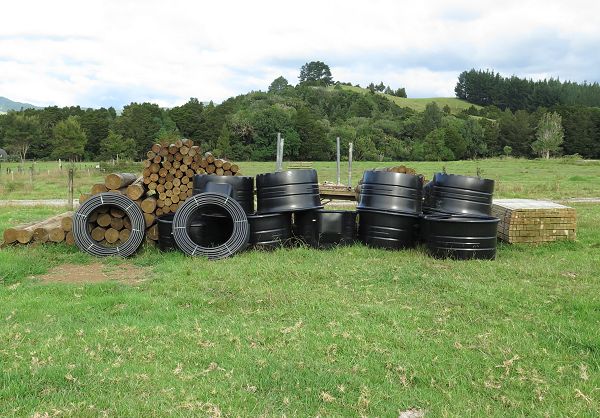 Last week I rang around for quotes on troughs and alkathene pipe and this morning they were delivered - a useful extra service from the best priced supplier.  There goes another two and a half thousand dollars on the riparian reserves conservation effort.  The troughs are all necessary because the cattle will no longer have unrestricted access to the streams.  Sadly the Regional Council Environment Fund doesn't fund any of this sort of extra infrastructural requirement.

While they were being delivered (I passed the guy bringing them on my way down the road), I drove to Kerikeri to attend a workshop on composting and soil fertility, something I need to know a lot more about.  It was held at the home of a woman who does a lot of work in the community on waste reduction, reuse and recycling of materials and who had a most impressive garden, mostly in raised beds. 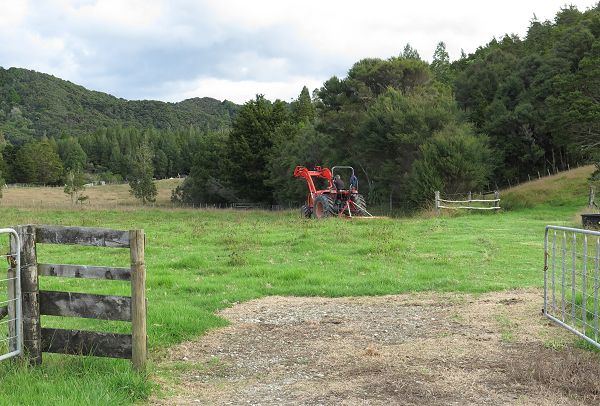 Home again before the end of the afternoon, I asked Stephan if he'd like to go and mow Flat 4, while I went out to check and shift cattle. 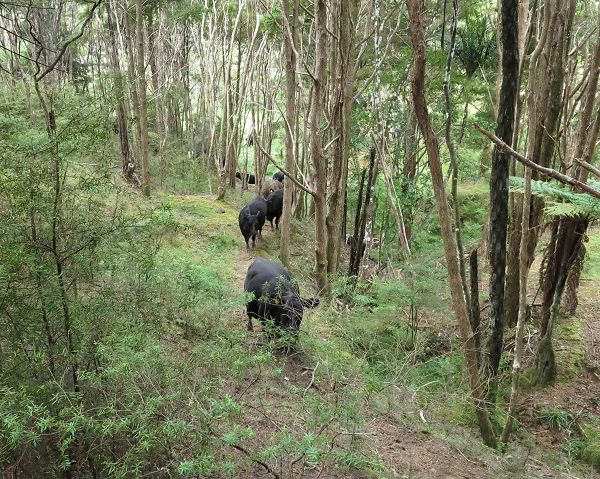 Having found all the cows, calves and yearlings present and correct, I called them along Route 356 and then up this steep end of the PW, climbing up to the gate into the Middle Back. 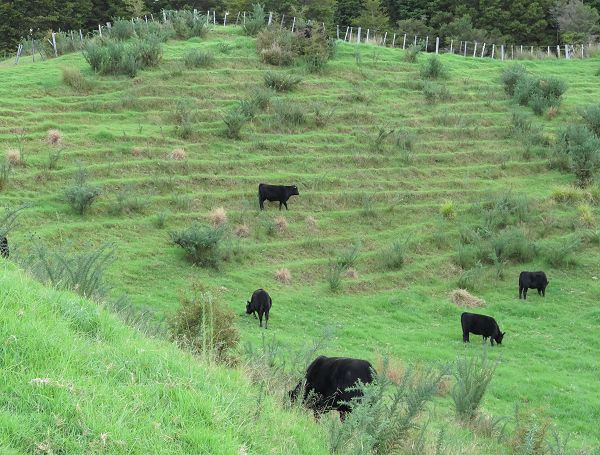 There are dead sedge plants all over this side of the Middle Back, where I spent a couple of hours a few weeks ago wiping them and any rushes I found. 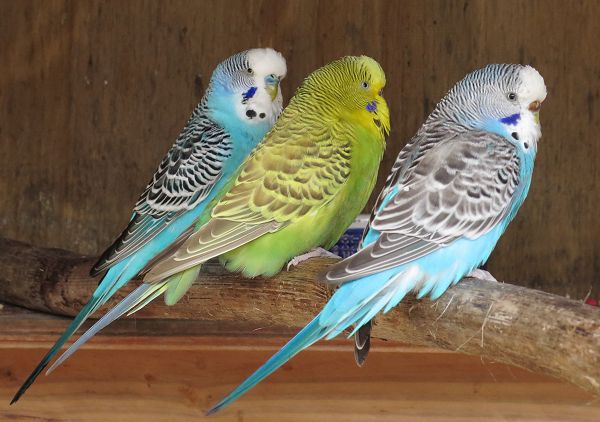 I thought I'd better get some pictures of our three existing budgies, before we add a whole lot more and perhaps get confused.  Loofah, at the front, won't be hard to pick amongst other birds, with her damaged wing. 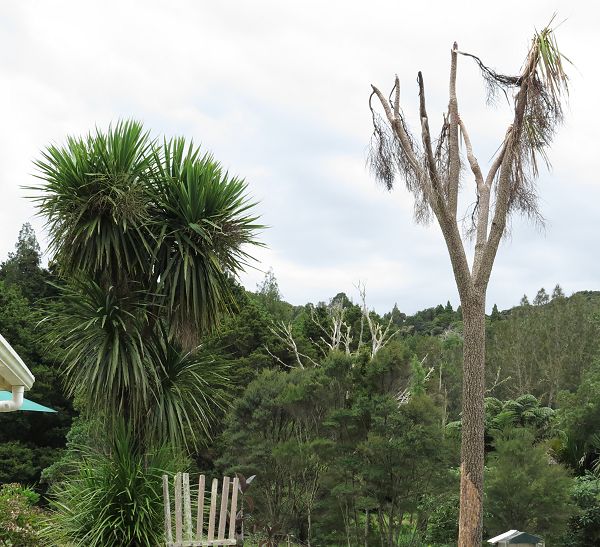 The bark of the dead Cabbage Tree flakes off whenever I pick at it and it only has a tiny bit of green left on one branch now. 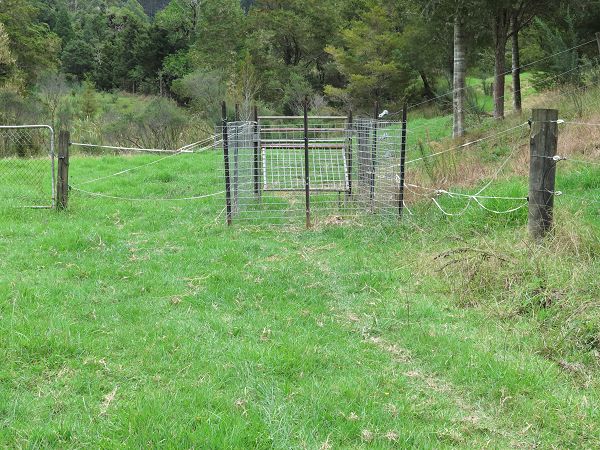 Stephan moved the pig trap a few days ago, placing it over an obvious pig route through the Big Back North gateway but since then the pigs have just gone around it. 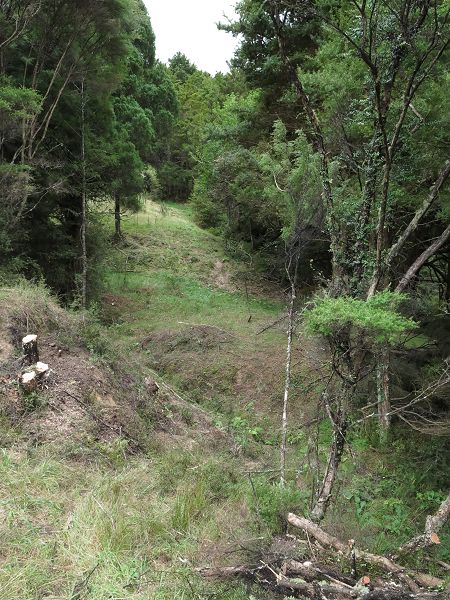 Stephan has been cutting trees, working out where to fence up the hill in the Small Hill paddock, realising a lot of it is really steep but not wanting to lose all of it to reserve areas when some of the steep bits will provide access to some nice warm grassy areas part-way up the hill.

The gully in the foreground will have a culvert inserted to allow easy access across it.  To the right of the sunlit grassy patch in the centre is a very large Puriri which will be protected by the fence along the stream - and we've realised it would take far too much mucking around to try and provide access to a nice little patch of grass on the other side, down by the stream, so that'll just have to be part of the riparian reserve and we'll see what grows there over time. 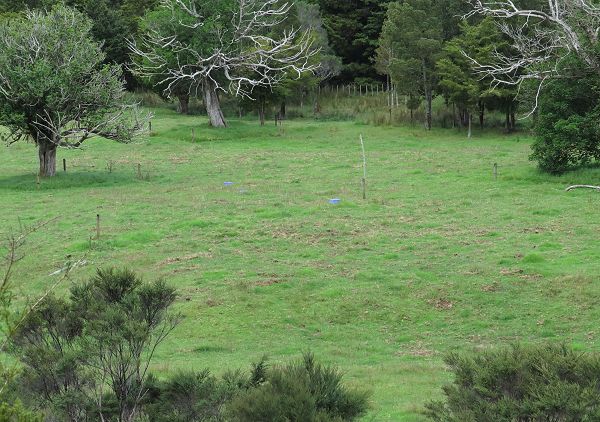 The Small Hill climbs very quickly from the level of the Mushroom flats and from up here the extent of the pig damage to the pastures is evident.  All those brown/beige areas have been turned over by pigs; it's very annoying.

Jonny, who keeps a number of bee hives in our Orchard, came to service them today and I mentioned the pig problem to him because I had a vague recollection of his having talked about pig hunting.  He said he'd like to come out for a walk with his son and a rifle and see if he can help reduce our problem.  Excellent.