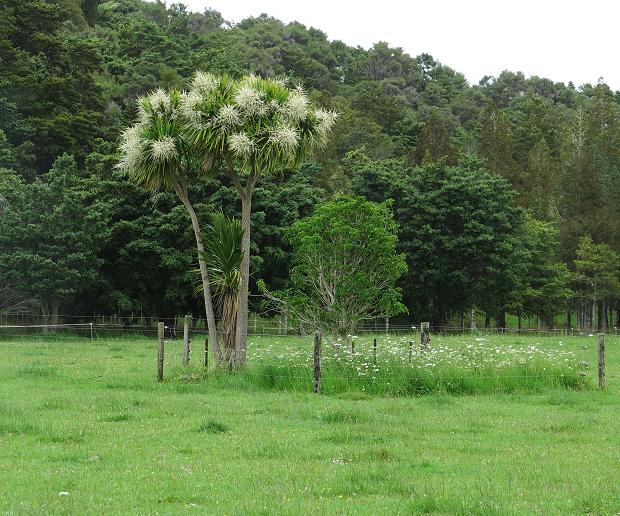 The Cabbage Trees are looking fabulous this year.

I'm glad most of them do not succumb to the Sudden Decline which killed my garden tree.  It gives me great pleasure to watch the development of trees like this one, which I grew and we planted here, along with those surprise trees which emerge along the drains and the edges of the bush reserves, where birds have dropped seeds. 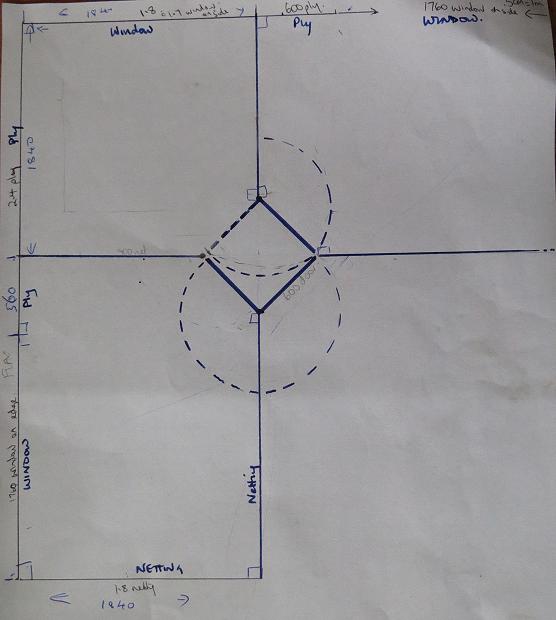 We came up with a mad plan.  I'm not sure why it happened, these things just sort of do.  We're going to build an aviary on the back lawn.

The outside walls all have big panes of glass (at last they'll be out of the shed!), so we don't obscure the view out across the flats and to give the birds shelter from the prevailing winter winds.  There will be three doors so the two flights can be separate or joined and a good-sized work/store room with a sink and tap and bench space for small breeding cages. 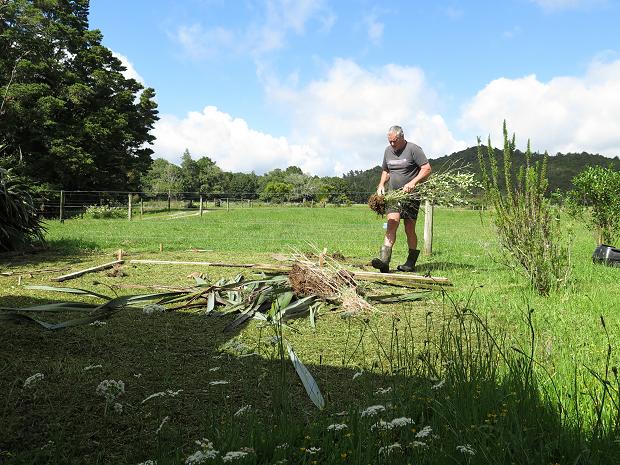 Stephan began by moving a small tree, laid out some timbers as indicators of the size of the structure and then I suggested that instead of digging by hand, he just drop the fence and get the tractor on the job! 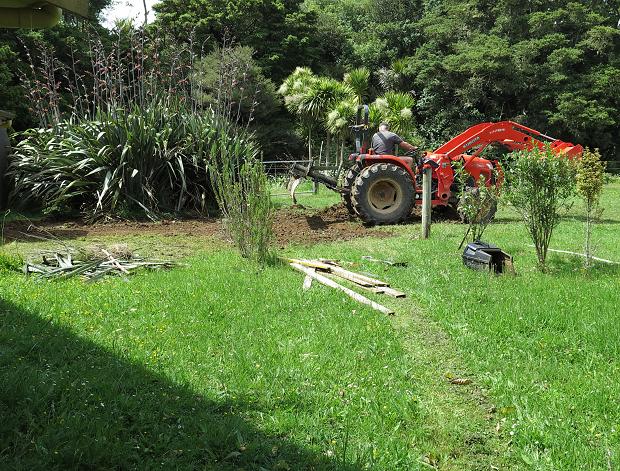 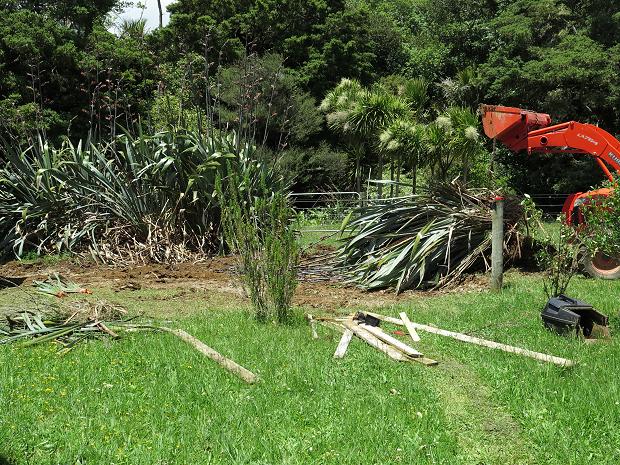 After considering the available space, he decided it would be best to move some of the flax.  It's a bit of a shame, it being in such a fabulous blooming state, but needs must.  We've known we'll need to split those clumps for a while as they've grown larger and wider every year. 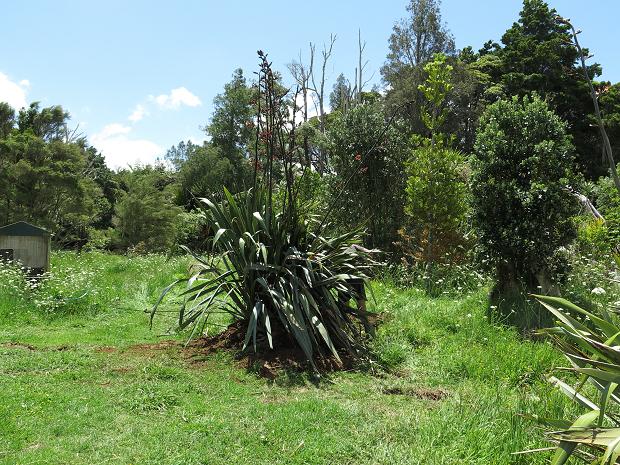 After digging a hole down near the pond, we planted the huge clump and tied it back to a fence-post with a long rope, to try and help it stay upright in the strong wind.  It didn't look too bad, considering it was huge and had to be partly dragged to get it down here.

When the day cooled a bit we brought the first mob of calves in to the yards for their first 7in1 vaccination, to castrate the non-pedigree bull calves (and Erin 132's mad son) and insert their NAIT RFID tags. 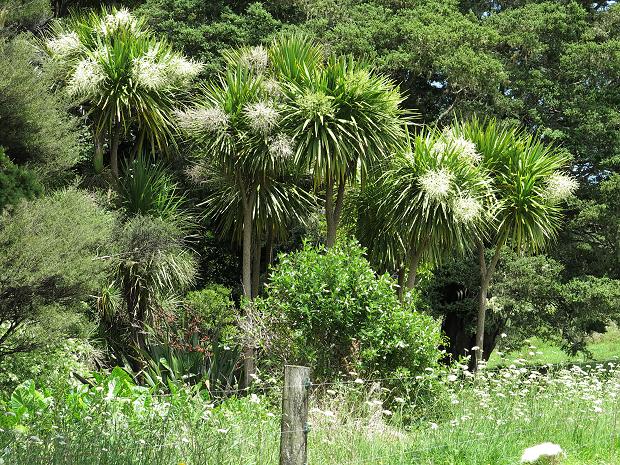 More of "my babies", the Cabbage Trees on the river bank near the house, all blooming prolifically. 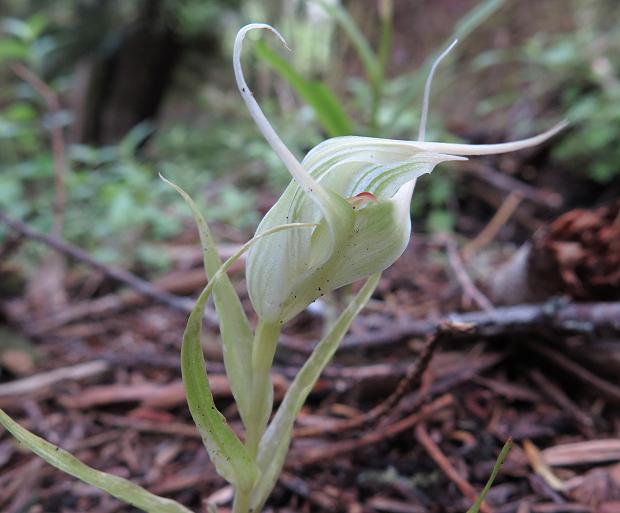 Amongst the normally green greenhood orchids on the Spring paddock's shaded slopes, I often find the odd pale one like this.  I don't know if it's a genetic anomaly or the effect of something in its environment. 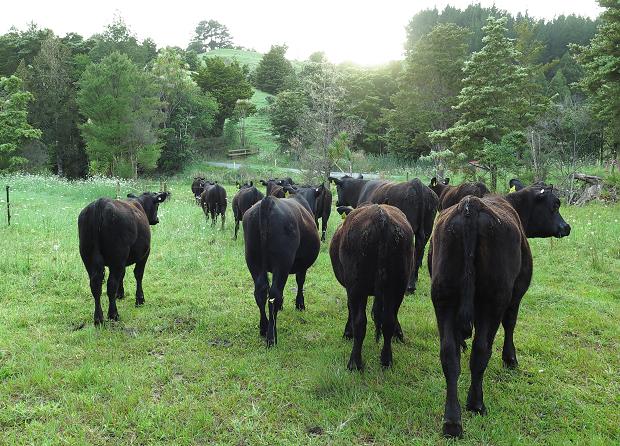 I wanted to move the heifers before we went off to Whangarei for the day, so we got up and went straight up the road.  Stephan undid the non-gate across the road (we really are going to have to put a gate back in there, since we're now using this paddock again) and I called the heifers from wherever they were and they all went quietly across the road and up the hill.

Skinny tall-bum at the back is the lovely Jet 777, Grey 607's daughter, who's been looking a bit off - there's nothing really obviously wrong, she's just a bit thin.  It's possible she's doing a growth spurt and therefore looking out of proportion compared with the others, who all have a bit more substance to their hind quarters at present.  Time will tell.

We had a safe and reasonably comfortable trip to Whangarei and back.  Someone else did not: the road was closed through Hukerenui on our return home, due to a fatal collision between two cars.  We were diverted around through Jordan Valley Road, which was a different experience than the last time we had to go that way due to widespread flooding around the Hikurangi Swamp. 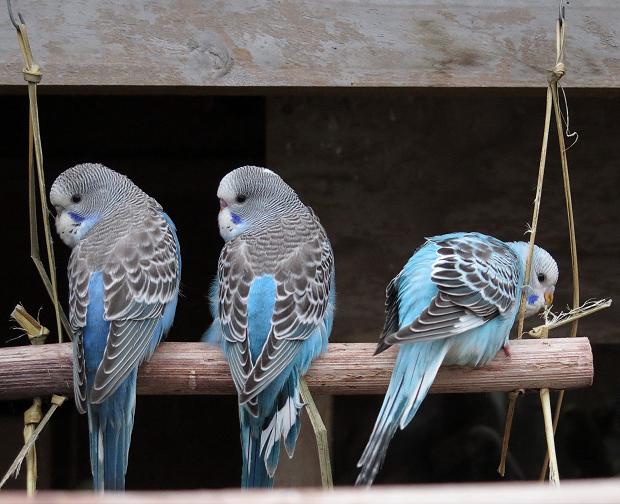 At home I was watching the budgies in the aviary and realised there were more blue ones than there should be: the babies had found their way out of the smaller cage in which they were still living with their two sets of parents.  There's no blood on the floor and everybody seems happy, so they can stay out. 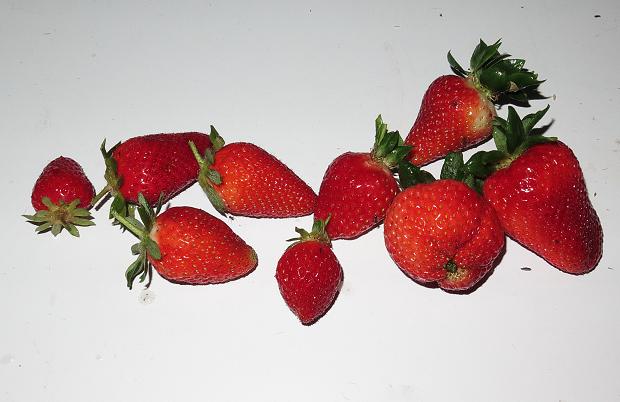 Strawberries!  Delicious with dollops of fresh cream.  I do mean dollops of cream, not cream one pours, since it's almost solid; glorious stuff. 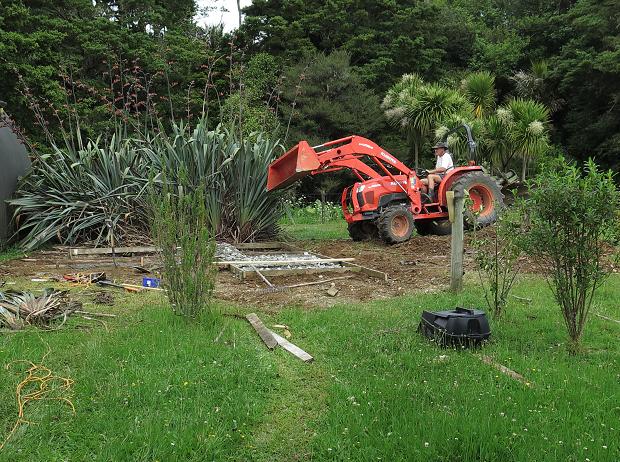 The big pile of lime-rock bought for the pig-sty is being further diminished, now being used for the base under the aviary concrete. 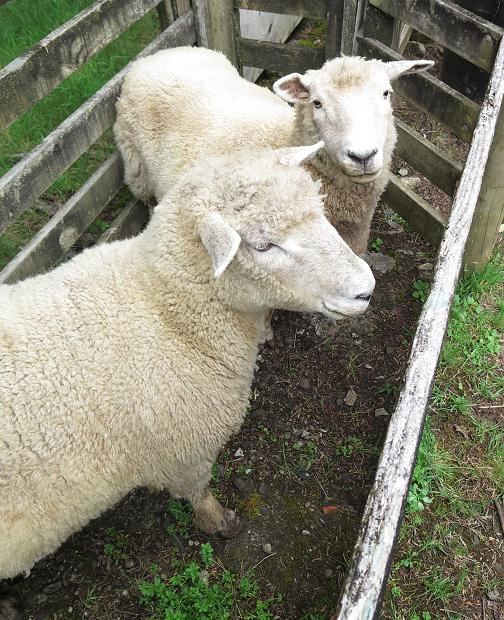 These are a large wether whose history I can barely remember, except that he should have become roasts a long time ago; and the Tag Ewe (who lost her tag some time ago) who has regularly appeared in these pages on her back, since she has a strange tendency to being cast.

This is the last photo of the two of them alive before Stephan slaughtered them and took them off to the butcher to become mince and sausages.  In the case of the ewe, we wanted to humanely kill her before she got in trouble again.  At some stage it is highly likely she would have become cast and not have been found soon enough to avoid distress.  We have always had to watch her carefully and so far she and we have been lucky.  Dying on your back while being eaten alive by maggots would be a far worse fate and one which could easily have befallen this ewe. 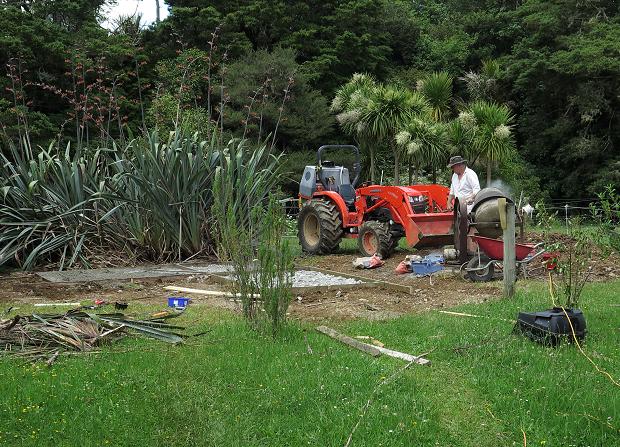 Stephan made concrete and began to pour into the new aviary boxing. 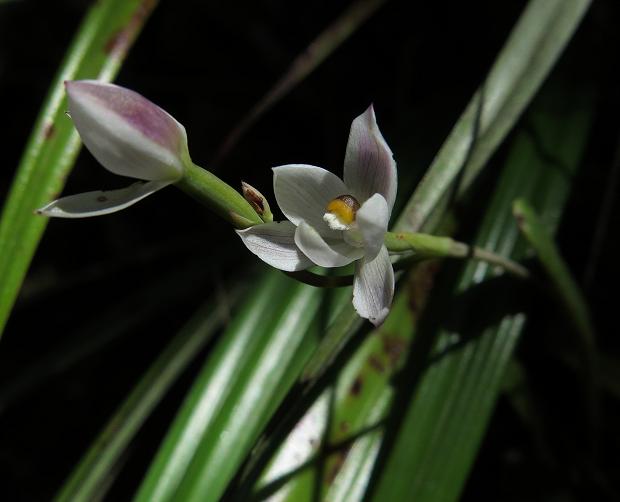 The weather being sunny and warm, I thought I'd better get back out to the Middle Back to see if these lovely little white orchids were blooming, which they were, just.  There have been far too many possums around this year, nipping off the flower buds just before they've bloomed.  It may not matter much if the flowers don't get seen, but it does matter that the plants can't then set seed if the flowers have been eaten.

A more positive ecological sign is the return of many frogs to our pond.  We don't see them but they're pretty loud! 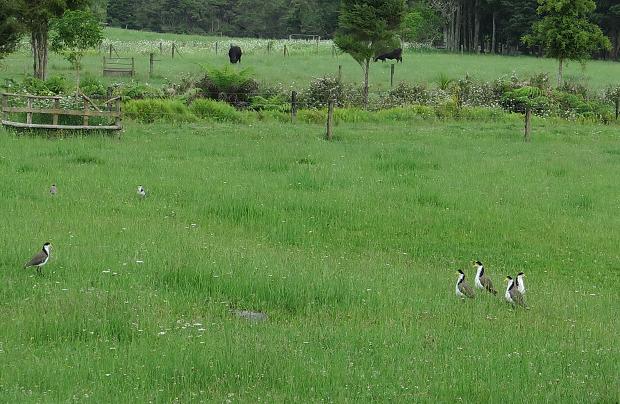 Spur-winged Plovers are entertaining birds to watch.  Presumably this is a family group, perhaps early and late clutches of chicks still hanging around with their parents?

Stephan looked at this picture and said it reminded him of standing on the beach in Anaura Bay as a boy, lined up with his siblings ready to commence calisthenics under Muriel's instruction (one of them looking longingly at the sea, wanting to go off for a swim instead).
One of Patrick's veterinary clinic clients owned land there and annually invited the vets and their families to use it for summer camping, where Stephan remembers spending weeks at a time, while Patrick probably returned to work. 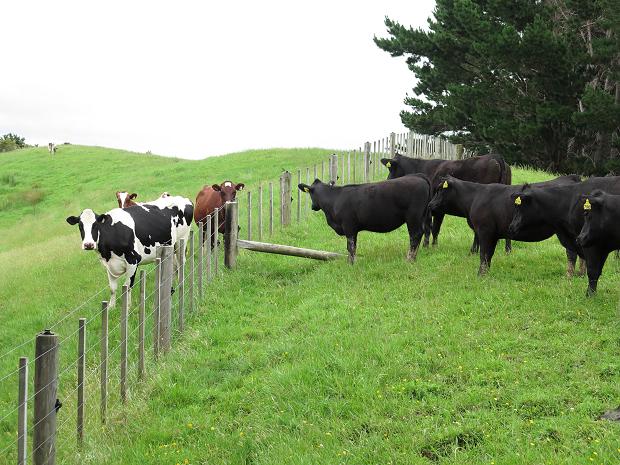 Our western boundary, Over the Road, is still not double fenced.  I'm not sure how much direct nose-to-nose contact goes on between my cattle and those occasionally next door, but it's something I would like us to work on preventing before much longer.

The risk to these heifers isn't great at this time of year because they're not pregnant and it's still a few weeks before mating.  The biggest risk is from BVD, but if they caught it now, they'd probably be over it by the time I mix them with the other cattle. 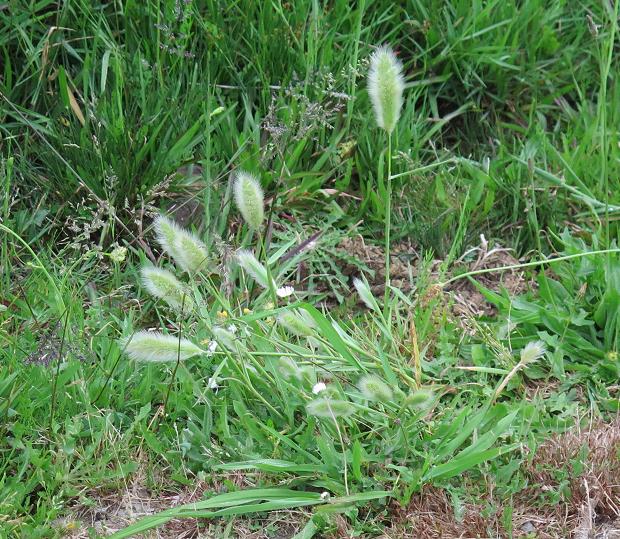 I do wish Messrs Bellingham of Bellingham Quarries would kindly come and help us remove these weeds they unhelpfully sent us with the track metal.

Annual Beard Grass a pretty little thing, but I really don't want it spreading around the farm, so we pull out every plant we see - and there are a lot of them on some sections of the track.  We'll beat it, eventually, but it's a damned frustrating job!