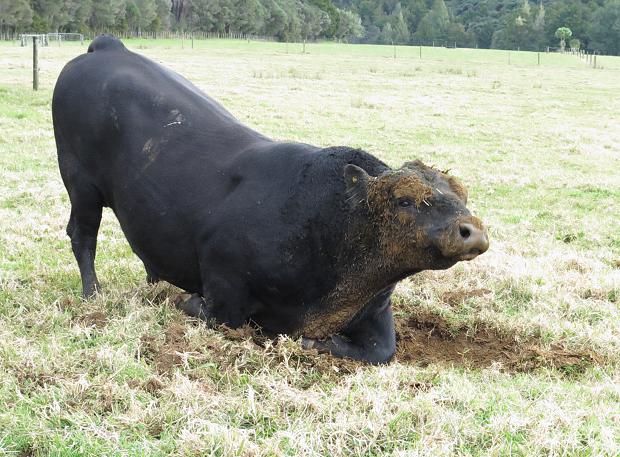 You thought only birds took dust-baths?

Most of my cattle like rubbing themselves in the soil, but the bulls actually dig holes in which to do it, usually inside gateways or beside fences where they've been pawing the ground in aggressive demonstrations to cattle on the other side of the barrier.

The photo is overexposed (all that frost-bleached Kikuyu didn't help), but was the best I caught of the action: content over quality. 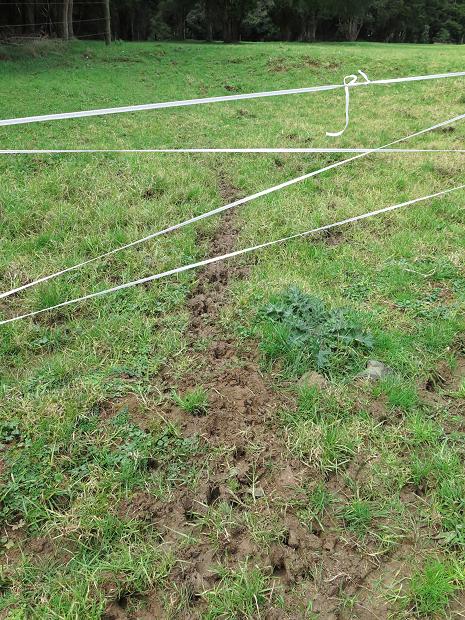 The feral pigs which have been ripping up the Windmill Paddock, have been coming through under this gate.  I couldn't see any footprints further along the lane and it took a little while to determine that they were coming under the Mushroom 1 fence on the other side of the lane. 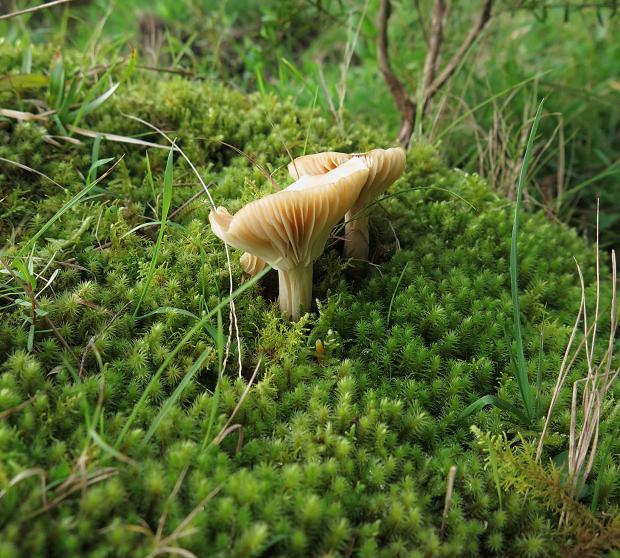 I'd walked out to push the cows along the lanes, where they'd been standing around since I opened the way for them to go to the Big Back yesterday afternoon.  Sometimes they behave quite stupidly.  Stephan followed a little while later in the ute and we went for a quiet wander around the Bush Flat reserve while he re-baited some traps.

I like having the internet!  Every second month on the 28th, I have to submit a Goods and Services Tax (GST) return to the Inland Revenue Department.  Doing it by mail invariably meant urgent trips to town to catch the post as late as I dared send it, or to go to a particular bank in town to make a payment.  Now I do it all on-line and while I still often leave it until the day it's due, there's not the same panic about getting it in, because submission and any required payments are all done instantly from my keyboard.

We did go off to town today, after I'd done the GST.  The Hospice Shop had jeans for $1, so I picked up most of the pile of 12s and went off into the changing rooms.  It amuses me that having spent my life as a size 14 (if you're North American, I have absolutely no idea how that translates), jeans in size 12 now fit me.  I was smugly thinking it was my own careful self-control which had led to the change, but after trying an old pair of jeans on at home, I suspect it's a change in sizing on the part of the manufacturers.  Perhaps they want to comfort their consumers whose body size is ever-expanding? 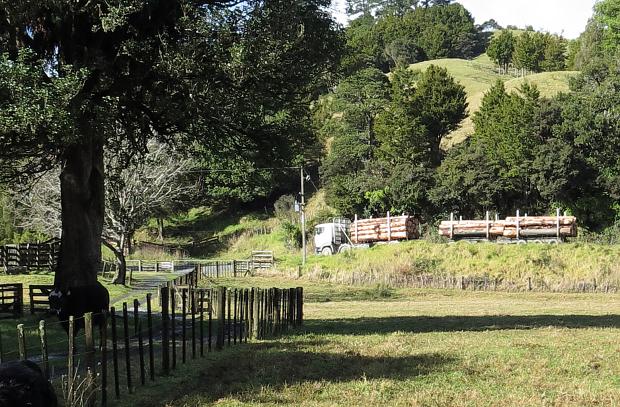 At 4pm we brought the heifers back from Over the Road.  Usually we manage to do it without the interruption of traffic - sometimes a car will come through just before we open the gate, so we wait.  Today, just as we had propelled half the mob across the road, we heard the approach of something rather large!  I held the others back by some judicious stick-waving, although they weren't in a big hurry because they'd stopped to eat the long grass outside the gateway.  A truck like this one came around the corner and stopped, taking up most of the road while a car passed from the opposite direction.

The heifers waited while the truck set off again and then we carried on.  The truck drivers are being pretty careful on the road, but it's a bit disconcerting having a vehicle of that magnitude lumber around the corner.

Everywhere there are fallen Puriri leaves, suddenly dropped after the frosts.  I don't remember seeing such a huge leaf-fall ever before; that frost was pretty high up from the ground and has left some of the smaller trees looking very sad.  The damage is harder to see in the big trees, but they were obviously affected. 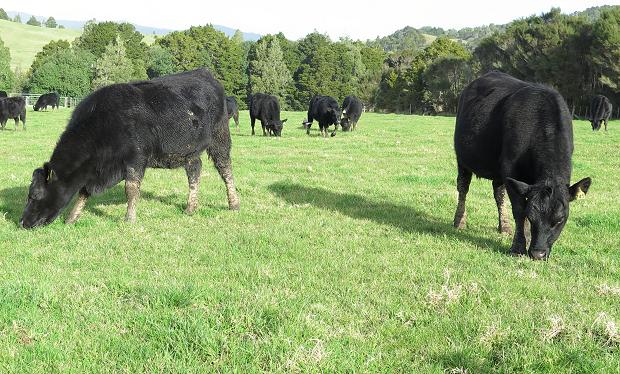 I think the heifers are still looking alright.  I try to ensure they maintain even body condition through this winter of their first pregnancy.  I don't want them fat, but they do need sufficient feed to continue to grow themselves and their calves without checks.  It occurs to me that keeping them in a mob with the rising yearlings provides a fairly sensitive indicator of insufficiency: the little heifers tend to look a bit light a bit faster than their older sisters, providing helpful feedback on how they're all doing.  I operate a spreadsheet to keep track of how much feed they're getting, how long each paddock is rested and then grazed but this cold winter is making things a little harder than usual. 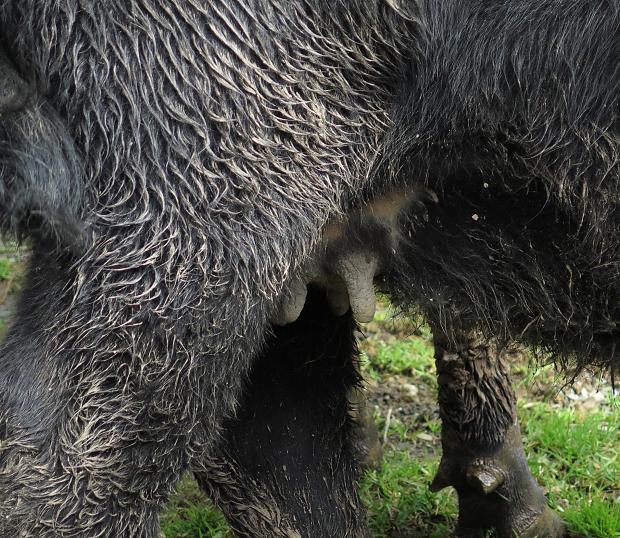 743's udder has attracted my attention because of its apparent advancement.  But I remember her grandmother, 561, who also developed very early.  I do not remember any similar observation about 703, mother of 743. 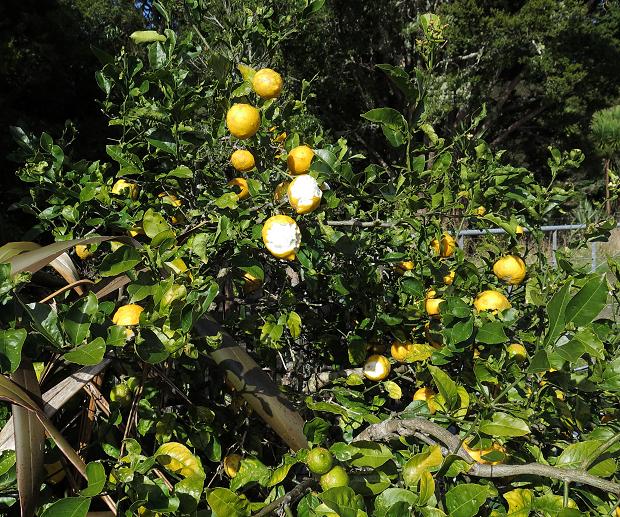 Somebody is eating the skins off our lemons!  I understand that possums do this.  Stephan picked most of them and made lots of lemon cordial and there are more yet to process.  Some lovely lemon curd, perhaps? 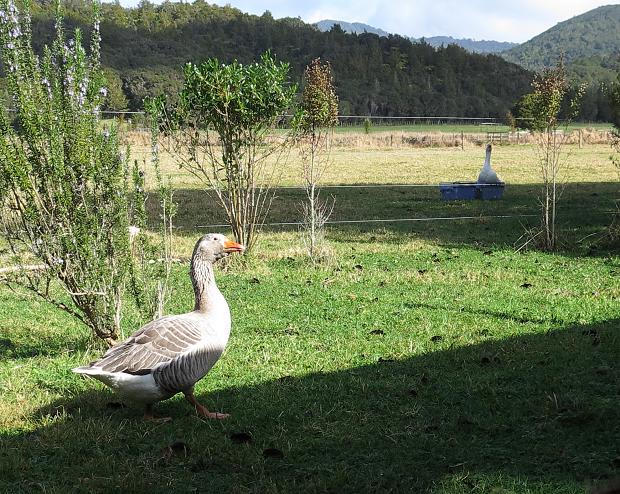 Several times every day, young Ms Goose steps through the electric fence to spend time on the back lawn.  Her brother honks his disapproval, loudly, from the other side.  Today he was sitting in his bath container, making the usual racket. 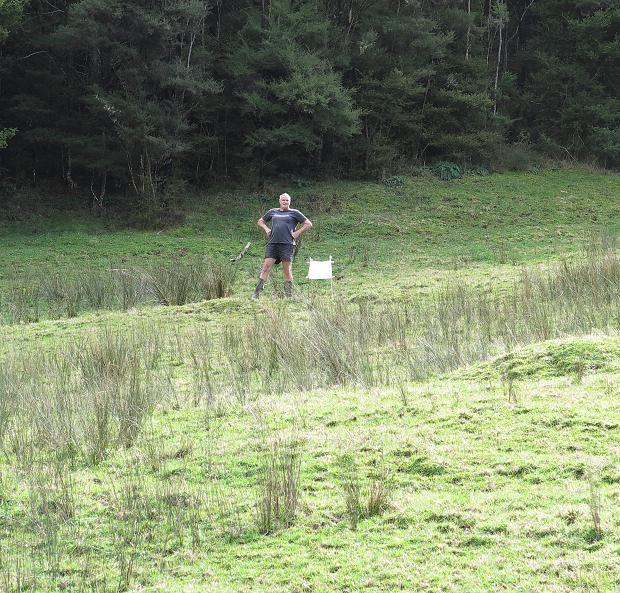 Jonny, who'd lent me a rifle to try out on the pigs, rang to say he needed it back.  I hadn't actually tried it out yet, but wanted to; so we headed out to our make-shift rifle range in the Tank paddock.

Here is my overly-trusting partner, demonstrating his confidence in my shooting ability!

No, of course he didn't stand there.  Do not try that at home!
But he could have stood there, had he been a complete idiot, and I would not have hit him.  I hit the target within a couple of inches of the cross I'd made on the paper.  The rifle (.243 calibre) had more kick against my shoulder than I really want, but it was good to have a try.  I'm supposed to be deciding which sort of rifle I want for my birthday.  It would not have occurred to me at 30, that twenty years later a rifle would be a likely birthday present. 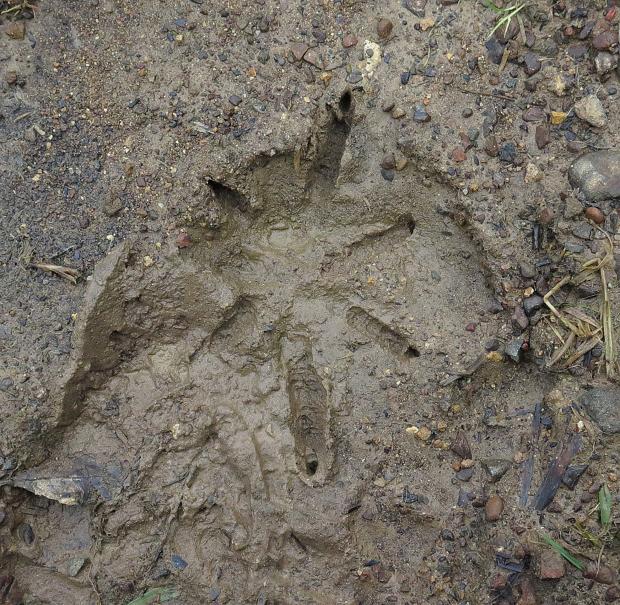 This two-way foot-print was the only evidence I found in the mud by one of the stream crossings, of a passing Kiwi.