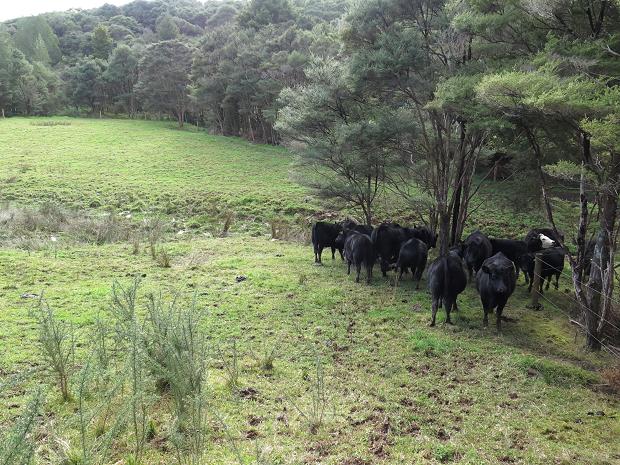 Somehow I completely forgot about these heifers yesterday, the day I'd planned to move them out of this area of minimal growth.  I got tied up with some financial stuff between Jill and the rest home and that took a lot more time out of my day than I'd anticipated.

They're in the Blackberry Paddock and there wasn't enough grass here for more than the day's grazing I intended.  I don't know why it isn't growing grass as quickly as I expect.

I ended up calling Stephan out to help me, because the heifers wouldn't cross the boggy drain (where there will be a couple of culverts, in time, to go out the gate along to the left.

Stephan then went out for the afternoon, to teach three women how to make Mozzarella cheese, to go on the pizza dinner we would all share in the evening.  Late in the afternoon he came home to pick me up and we had a lovely evening with three other couples, just down the road. 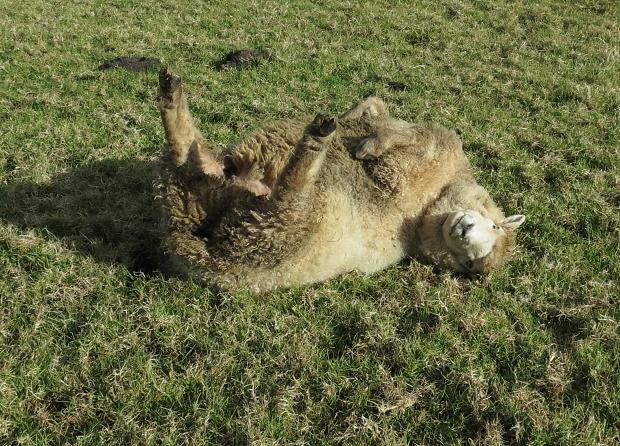 We have concluded that it's the House paddock which traps these sheep on their backs, not necessarily entirely the fault of the sheep themselves.  It happens almost daily when they're in here and rarely anywhere else.  Because we can see them from the house - with the occasional short walk to look over the hump in the middle of the paddock - they're rarely down for long and can simply be rolled over and left to walk away.  If a sheep has been on its back for a long time it may need holding still for a while before being let go, or it will blunder off, potentially into more trouble. 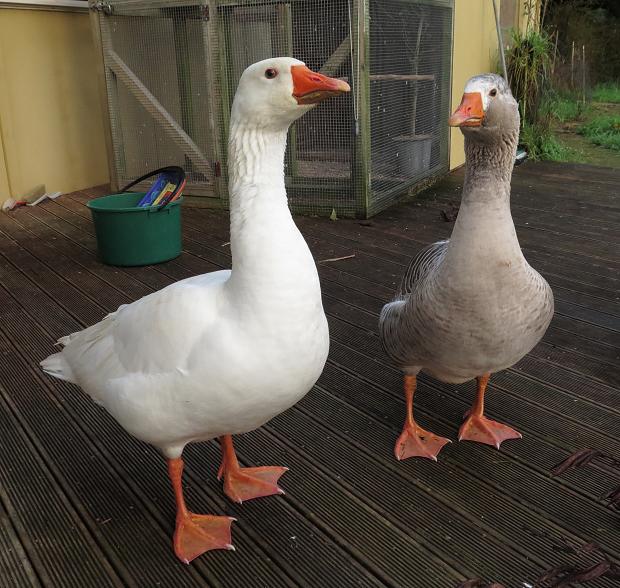 The geese are back.  I had hoped they'd stay out of the garden, but that was an unreasonably high expectation. 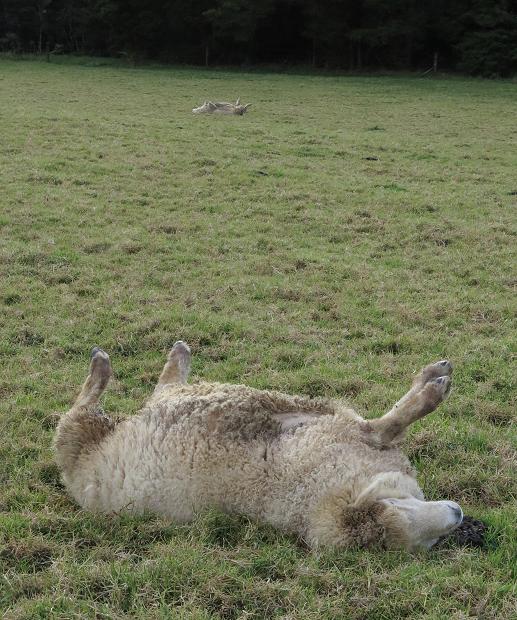 Really?  They were all upright an hour ago.

I've been gradually giving all the cattle a copper shot; today was the young heifers' turn.  It doesn't take long to walk them in, put them through the yards and take them back out to the farm.  I have yet to do the older heifers and the bulls.  I tend to feel some trepidation about getting on with this job and play mind games with myself (it's alright, I can do it tomorrow), sort of sneaking up on it by going ahead and preparing for the job anyway.  Winter malaise, perhaps?  It's not a difficult job and must be done.

I spent most of the day in town.  Back on the evening of the 12th, as we left the restaurant to return home, I looked down at the instrument panel in the ute and saw that the temperature needle was indicating its maximum level; so too was the fuel gauge.  I pulled over immediately and asked Stephan when he'd last filled up, whether he'd checked the levels of water and oil recently and then noticed that the ute thought it had travelled 999,999km.  A million kilometres!  Where could we have been?  As we drove home, the trip meter indicated we'd travelled only around 3km and we were apparently only ever doing 25km/hr.

The next morning when in town, Stephan called in to see our mechanic and organised for him to investigate a repair process.  He didn't do anything for a week and eventually, when I realised we'd not heard from him, I chased the matter up by phone and subsequently, on the Tuesday I went to Paihia on the bus, the instrument panel was removed from the ute.  We should not have driven it anywhere thereafter, but they didn't want us to leave it there.

Yesterday the renovated panel was returned, after being rebuilt with a new "brain" and this morning it was installed.  This resolves a problem we've been trying to pin-point for a couple of years, including several hundred dollars spent on having the cooling system checked because the temperature gauge began to read higher than it had normally done before.  Now it sits back where it always did.

That done, I went off for a bit of maintenance checking myself, by way of an ultrasound scan.  The hospital is so good; I'd received a letter advising of an appointment on Thursday, but had heard nothing about the scan which should have been done before then and a couple of phone calls got it sorted and they fitted me in today.

Wednesday the 1st of July

I have been constantly reading, note-taking and thinking over the last couple of weeks: soil, soil, soil!  I'm enjoying it all very much.  I love learning about things I didn't understand well but should know. 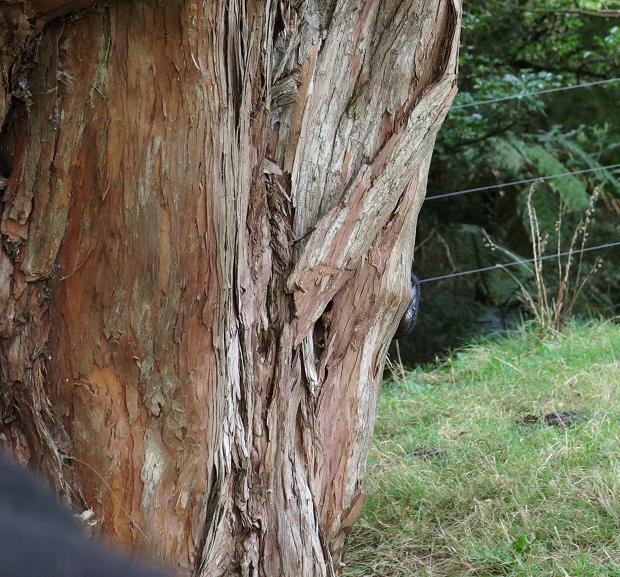 In the afternoon on the hill Over the Road, I could count only eleven cows, but stood and stroked Dexie 101 for a while.  As I did so, I gradually realised that there was an occasional dark movement behind the trunk of the tree under which we were standing: the tip of an ear and then a bit of nose.  Demelza.  I could see no other part of her body behind the wide trunk. 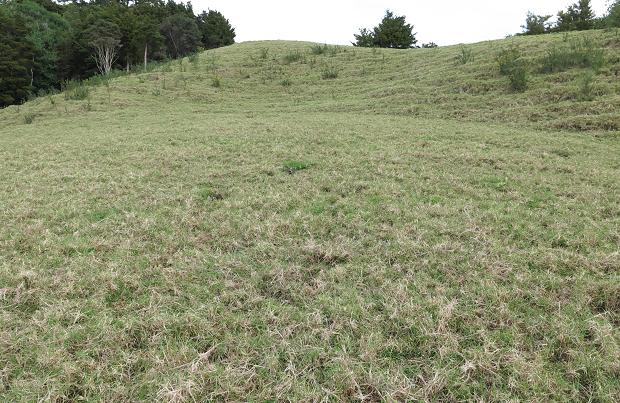 The Kikuyu up here is a bit of a mess, because it's a hard paddock to keep under control.  When it gets long and forms a sort of cushion of dried stolons, it's hard to get back to a low level again and that shades out other plants which might grow better than it does in the cold months.

A lot of the beige matter is dried stolons the cows have picked up and then spat out as they've chewed, which will end up rotting down over time, but we'll not get really good control here until we sub-divide the paddock into smaller areas, so more controlled grazing pressure can be applied. 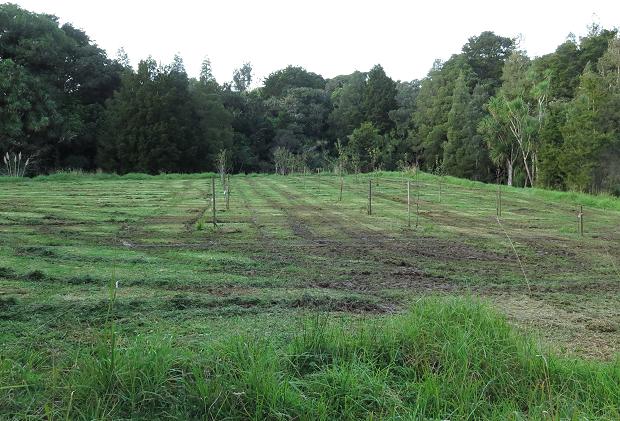 Stephan mowed the orchard.  The ground conditions are not ideal, but he didn't make too much mess and it needed doing. 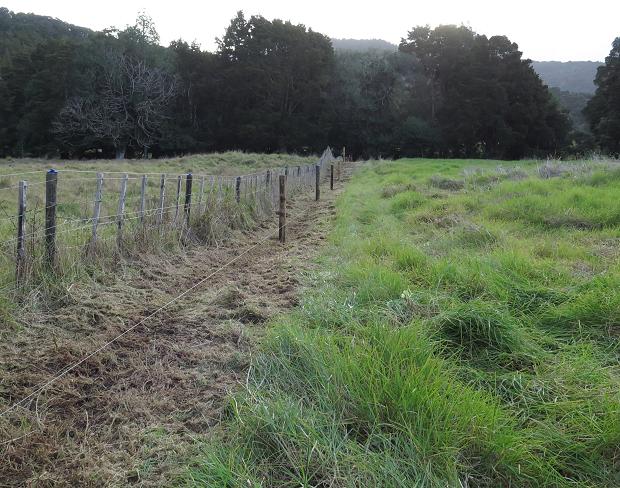 He also mowed a strip along the boundary, so we could clearly see if there were any issues with the fence.

We tried bringing the R1&2 heifers over the stream, but they wouldn't even come through the gate from Flat 4 to the riverbank; they've never been there before.  But if we put cattle here again, we actually need a double boundary fence so they can't contact the animals next door: so Stephan built one, in half the afternoon.

While he did that, I coppered the older heifer mob.

We "did" the medical profession today, starting with the hospital for my appointment this morning, which took rather longer than we'd expected and some administration had to be curtailed so that we could get on our way to Whangarei, where Stephan had an appointment with a Radiology clinic.  He has hurt his shoulder with all the fencing over the summer and an injection of cortisone was indicated, but our doctor wanted it to go into exactly the right place, under ultrasound guidance.  The doctor there was an extremely rude and unpleasant man, although he appeared to be very good at what we needed him to do.  What is it about doctors involved with bones and skeletal matters?  The ones we've dealt with in the last couple of years have had really disgusting attitudes to patient relations (in both senses).  Fortunately we had the morning's experience with universally nice health professionals at Kaitaia Hospital to balance the experience.

In my head, today was the deadline for my third magazine column on soils.  At some point I realised I'd somehow brought it forward by a week, but that means I'm comfortably a lot more prepared than I would have been and so could relax a little during a visit by fertilizer man, Paul, who really does want us to buy his stuff, but with whom conversation ranging over a variety of farming topics and attitudes to the environment has been far more interesting than straight sales talk.

But my recent research has indicated that we probably need to use a lot more lime to address our soils' acidity, before applying much more of anything else.  I have been disappointed by the lack of obvious response to the application of some liquid fertilizer in 2013.  I thought things were pretty good in the paddocks to which it was applied, but a recent walk up Flat 2 was very disappointing.

Soil tests cost around $150 a pop and then more to address whatever deficiencies a test shows.  But then if I could make one hectare produce twice as much grass because I tested and addressed its problems, I could carry one more animal through the winter...