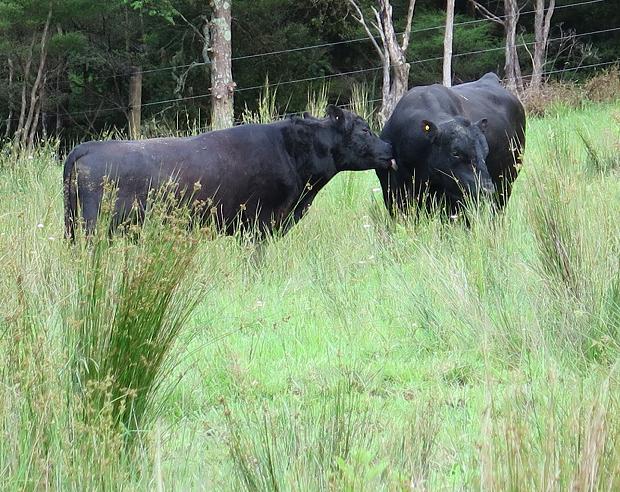 "Brotherly love"?  We had a correspondent, a guy we'd met through someone else, who used to sign his emails that way: creepy!  I digress.
These two are 134 and 87 and while they're not actually brothers, they are several times related to each other.
87's sire (Schurrtop Reality X723) is 134's paternal grand and maternal great-grandsire; Abigail is grandmother to both (maternal and paternal respectively) so they're first cousins and she's also 134's maternal great-great-grandmother.  Because they're such fine-looking and functional specimens, this is called line-breeding, not in-breeding (that's sort of a breeder joke which is seriously offensive to people who deliberately line-breed with precision and great care).
87 has 25% of his pedigree tree not shared by 134 and 134 has 31% - five of his 16 great-great-great-grandparents are not antecedents of 87.  Does this matter a jot?  I don't know but I distracted myself for several minutes playing with their pedigrees, which I always enjoy. 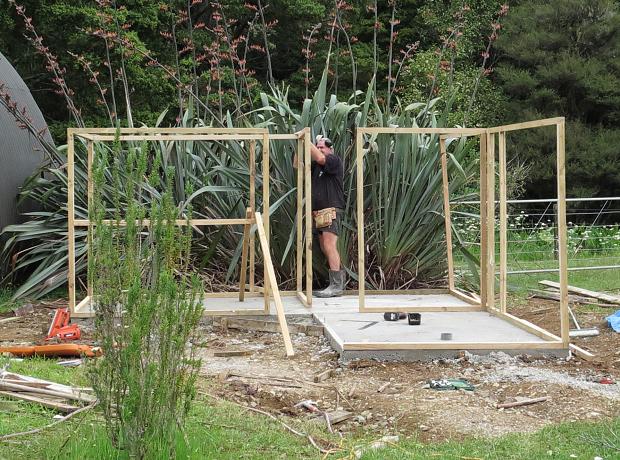 With some of the aviary framing in place, we begin to get an idea of the size of the spaces we're creating. 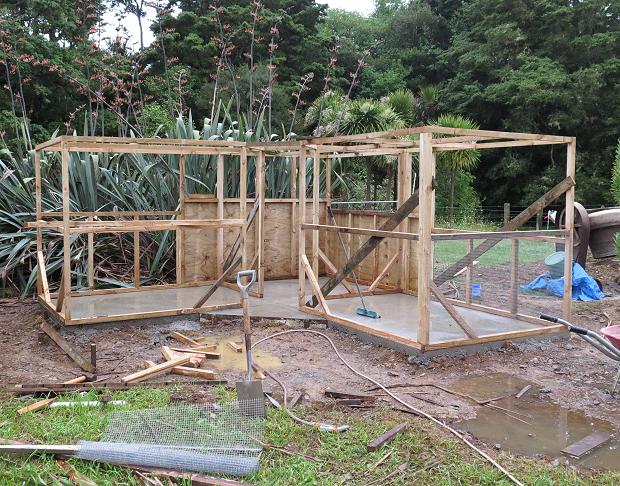 It rained and there was no electricity all day, so Stephan worked between showers with wood he'd precut, putting ply on some parts of the back walls and a bit of netting on the front.  The netting is tricky stuff, having been manufactured to a lower standard than would once have been the case: it is not square, so will end up being a bit wavy in places.

The rain is a pain when one has outside projects to complete but we're ever so grateful for it.  There have been many recent springs and early summers in which we've been worryingly dry.  This year's rains have been very good, keeping things watered sufficiently to take advantage of the now warm temperatures - it was as if a switch was thrown last Tuesday and the average daily temperatures have jumped by five degrees.

The power was off for one of the more-than-annual maintenance days on the one line feeding the Far North. 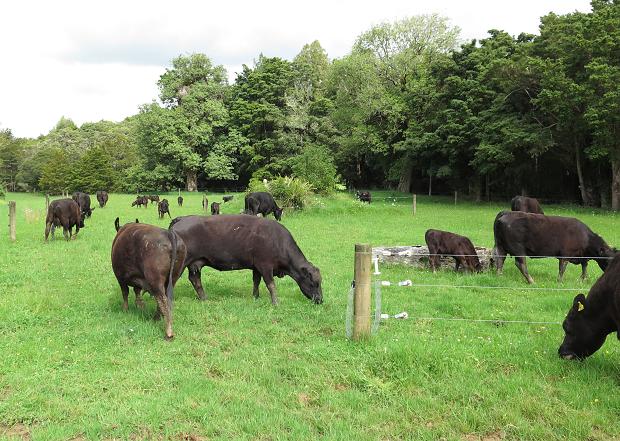 The cows are looking pretty good.  The light ones are holding condition, those who were in better condition at calving are beginning to look quite smooth and all appear to be growing their calves well.  There's been only scant evidence of Coccidiosis scours in the calves and things are going along very easily.

Tuesday the 1st of December 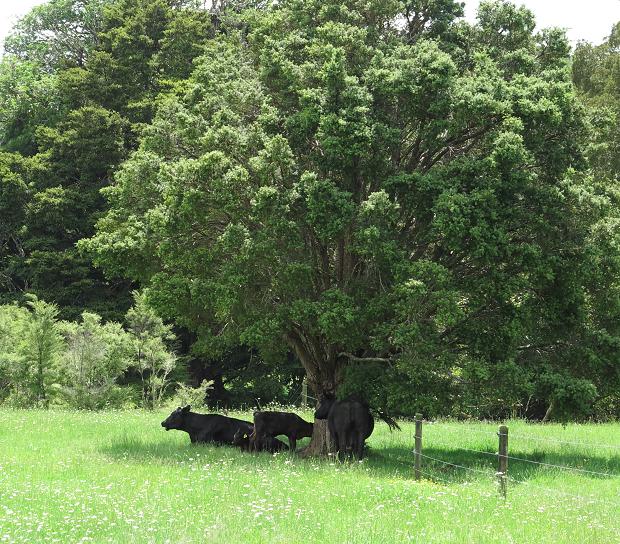 The Totara trees cast such lovely cool shade on hot days.  I love seeing the animals sitting around comfortably in the cool. 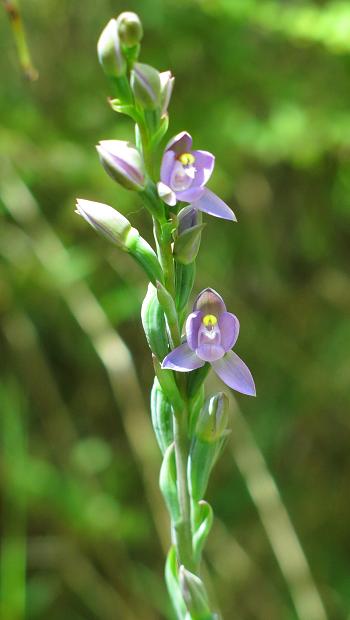 I failed to get a good picture of this plant in the blustery wind, but I was glad to have found it.  Most of the Sun Orchids are this mauve colour, with only a few pink ones over on the southern side of the farm, none of which I found blooming this year because they got eaten by possums. 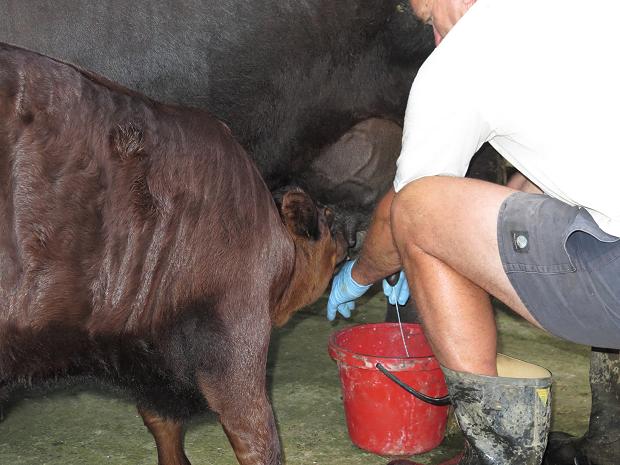 When you milk a cow and she feeds her calf the rest of the time, it's called share milking* but it's not usually this close.  After milking Zella for the house, Stephan milks Imagen, a rotating process as she turns around constantly in the small yard.  She holds her milk back so that eventually Stephan lets her daughter in to begin feeding as he continues milking and Imagen will then let her milk down.  Usually calves in this situation will feed from the other side, but little heifer seems quite comfortable feeding beside Stephan.  He has to be careful of her bunting though, which is tremendously violent until the milk flows.

* The other type of share-milking you'll hear about in the media is in commercial dairy farming, where the share-milker owns some or all of the cows and someone else owns the land upon which they're farmed. 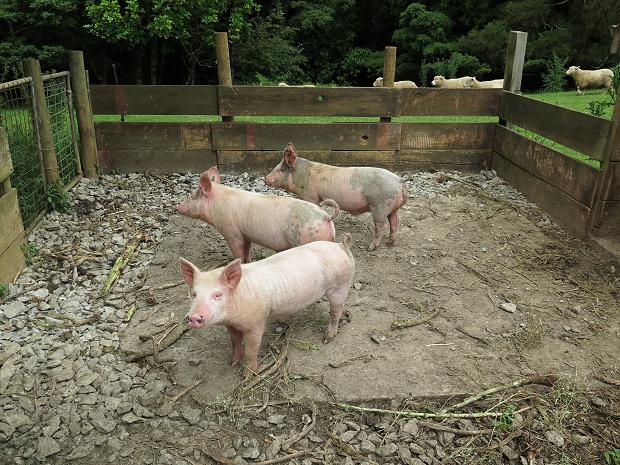 The pigs are bigger every time I go to look at them! 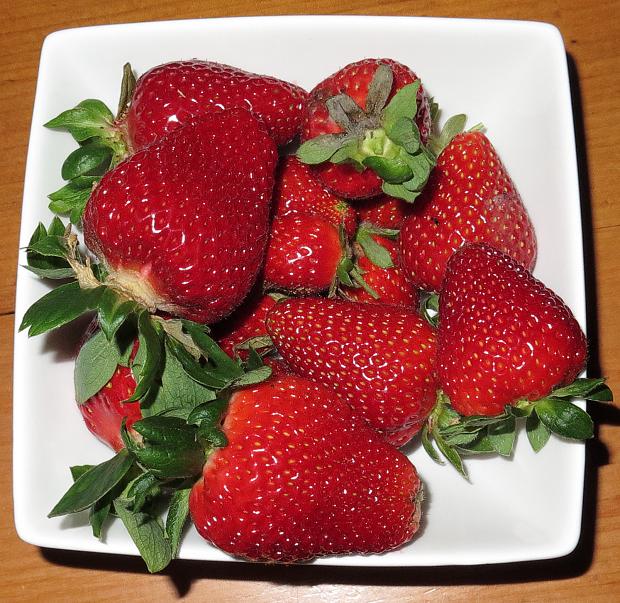 The strawberries continue being delicious.  Picking them on a warm, sunny day, bringing them inside and spooning this morning's skimmed cream over them is heavenly.

There are only about a dozen plants, planted in the planters Stephan made by chainsawing the centres out of some Tasmanian Blackwood logs which were not good enough for wood turning.