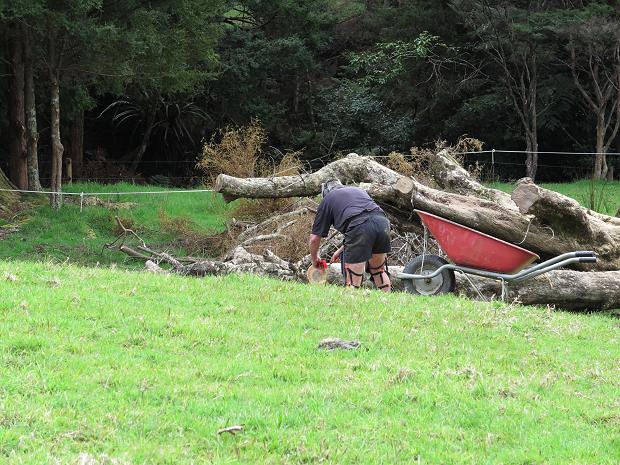 Having completed the raised garden beds, Stephan turned his attention to improving my rose garden which, at ground level, has been subject to the incursion of too many weeds and one of my rose bushes was brutally "pruned" by a lawn mower on one occasion!  I suggested that he go and chop discs of Puriri to form the edges of the garden and enable the soil level to be raised above that of the lawn.

He took chainsaw and wheel-barrow out to the felled Puriri in the Frog paddock and cut a couple of front-end-loader bucket-loads of rings of different sizes. 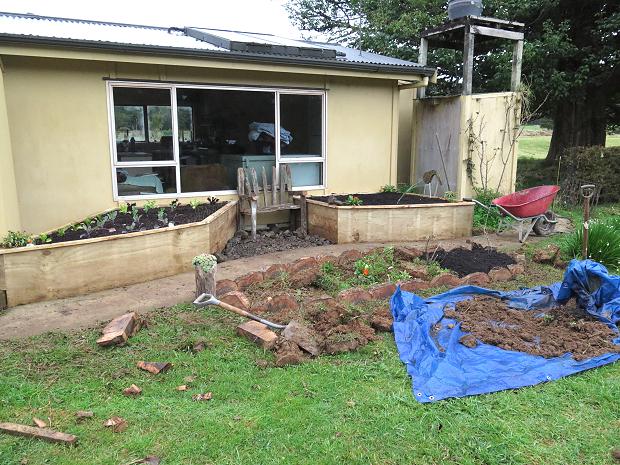 He said he never promised me a rose garden - he did, really, but we just can't help singing that song. 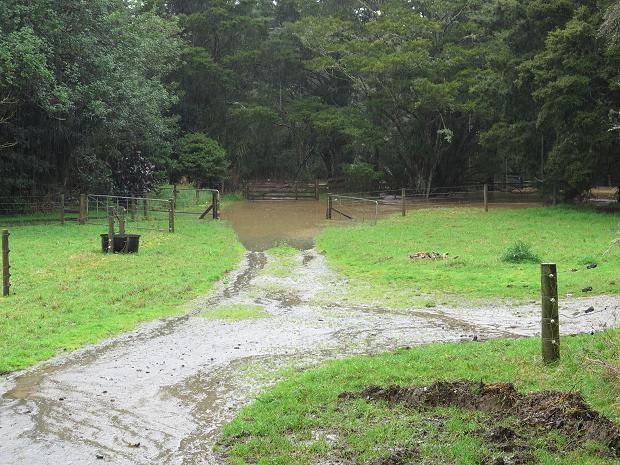 Fifty-five millimetres of rain, falling in a hurry, brought the stream over the bridge and up the driveway this morning. 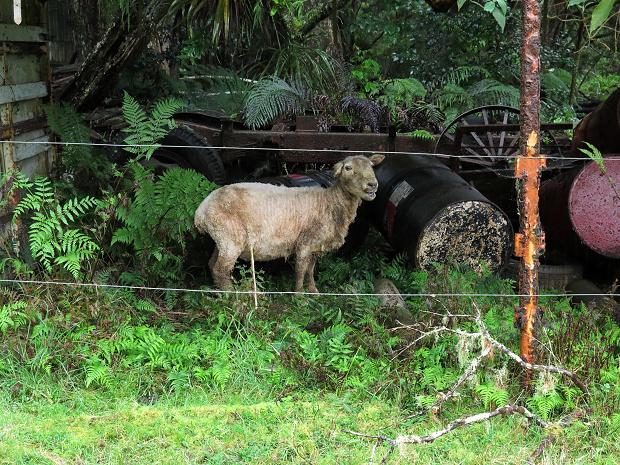 We went up to check on the sheep and I could only see seven.  With relief we found we'd walked past Lamb, standing very sensibly in a sheltered spot under the old truck canopy.

Tuesday the 1st of September 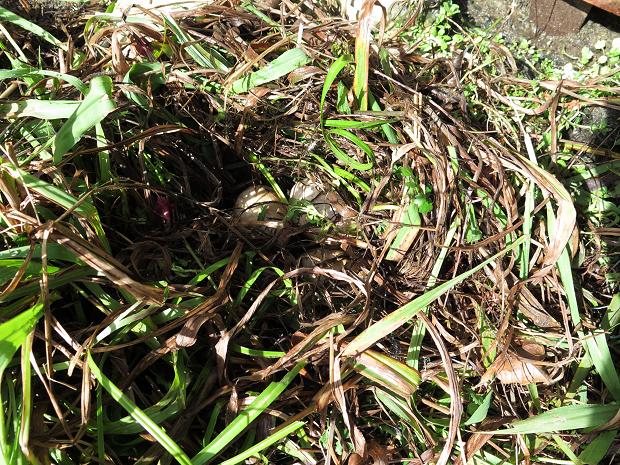 The young goose has made a nest just outside the big shed, which seems pretty silly, since it's somewhere we walk past regularly.  We now need to carry a big stick to get past safely, since Mr Goose attacks.  He appears to have forgotten that he owes me his life, that if not for me he would never even have made it out of his egg!

The one mature green and yellow bird has been trying to nest in the box Poly had been in but her eggs keep appearing on the floor of the cage.  At the suggestion of a bird-keeping friend, I caught the two "spare" males, Eco and the little yellow and blue bird and put them into the original cage, because they appeared to be harassing her all the time. 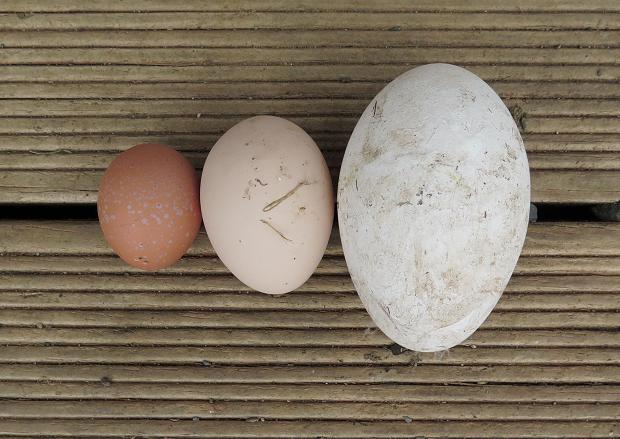 The pretty young hens are no longer at "point-of-lay", they're now laying hens - or at least one of them is.  The dark brown egg is from one of them, the middle egg from a mature hen and the large egg was laid by the goose. 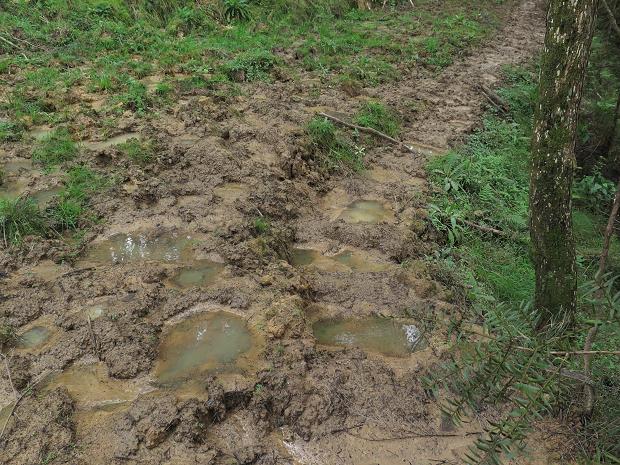 The soils are all waterlogged and it's most unpleasant.  This is Route 356 along which I walked to reach the heifers in the Middle Back. 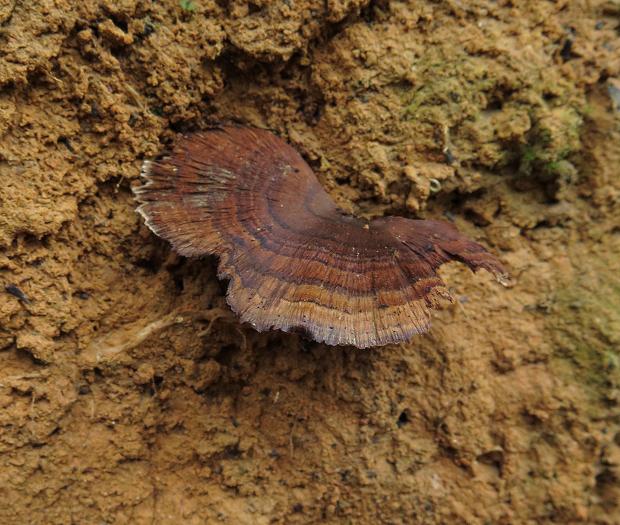 These little fungi were growing straight out of the clay bank at the edge of the track. 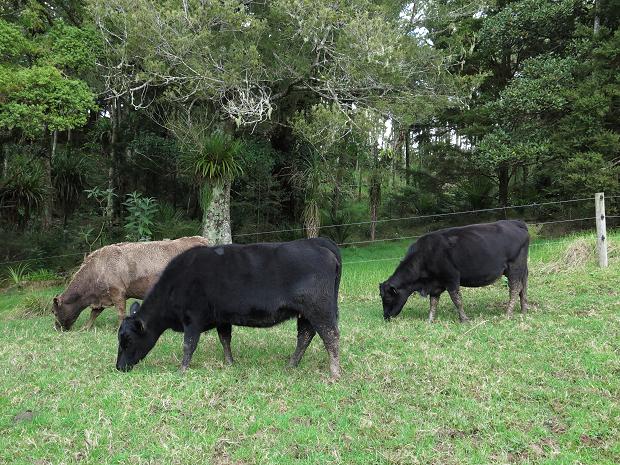 The PW reserve behind these heifers is looking really nice.  There are all sorts of interesting plants appearing in there, fighting their way through the grass, which will continue to grow until the canopy closes in. 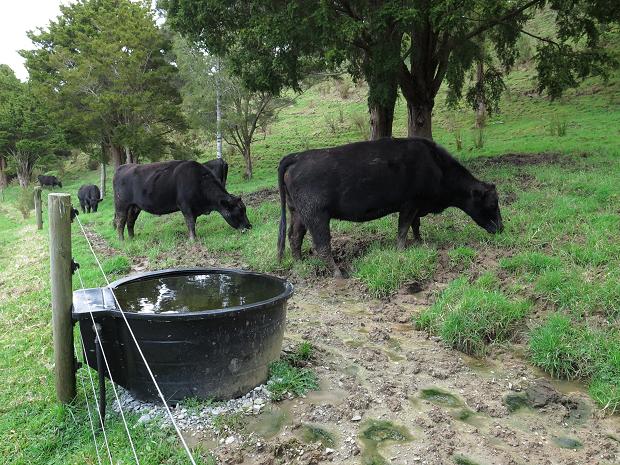 By the time I got back down the hill, the heifers were already there at the bottom.

Here are the twins in the foreground. 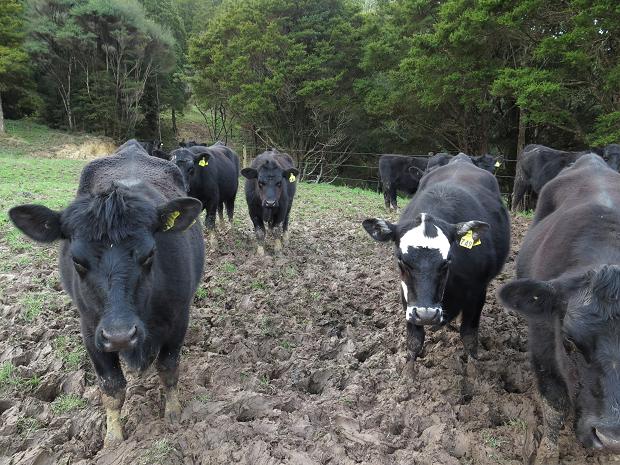 The young heifers appeared to have been standing around waiting to be moved instead of continuing to graze up the steep hill.  They make a muddy mess when they all gather together for a while. 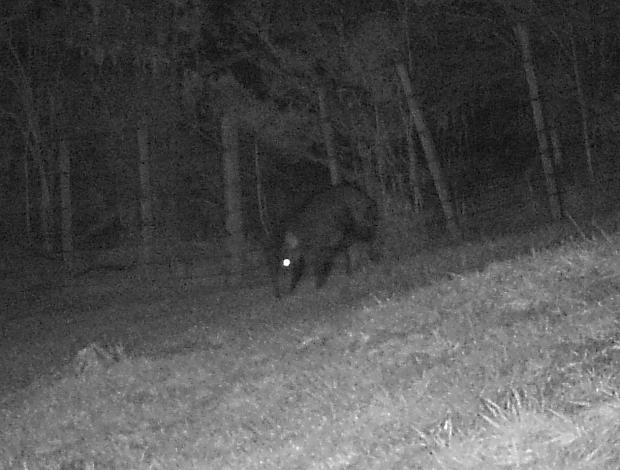 6.40pm and a feral pig appeared out of the Bush Block.  We were not there to shoot it. 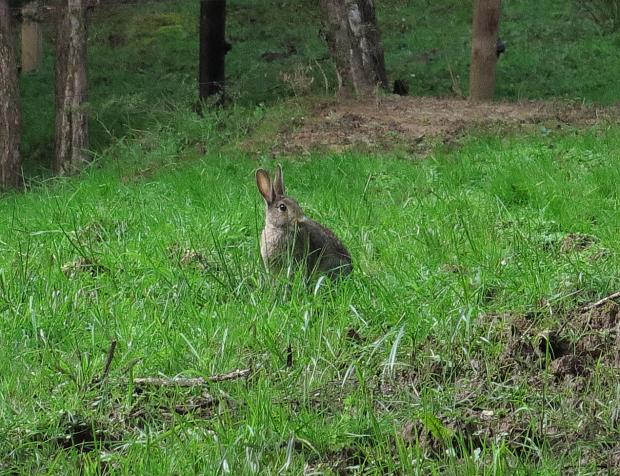 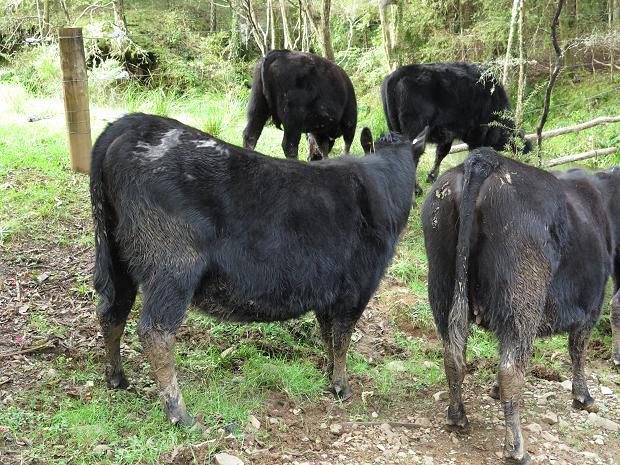 Erin 132 has weird bald patches on her rump.  Presumably it's the same fungal skin condition a lot of them get during the wet of winter and as she looks otherwise well, I'm not overly concerned.  Those bits must be cold though.

I've been watching and wondering about 132; she looks much heavier around the belly than her contemporaries.  I always start thinking somebody's going to produce twins and am only occasionally right, but I will watch her carefully in case there's anything unusual going on. 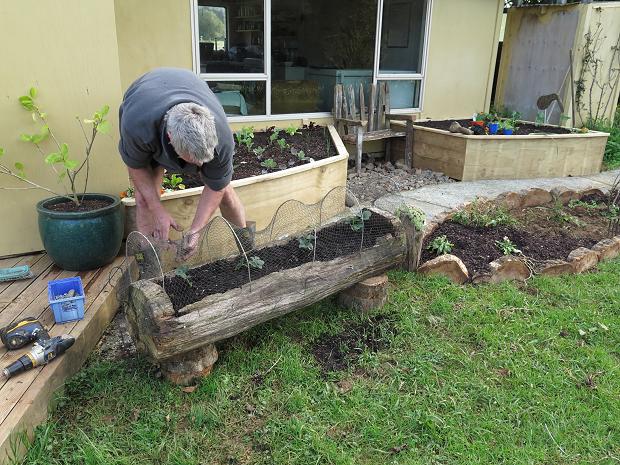 I came home and discovered Stephan finishing off a new strawberry garden.  It makes things look too cluttered there, so he'll move it again when we figure out a better position. 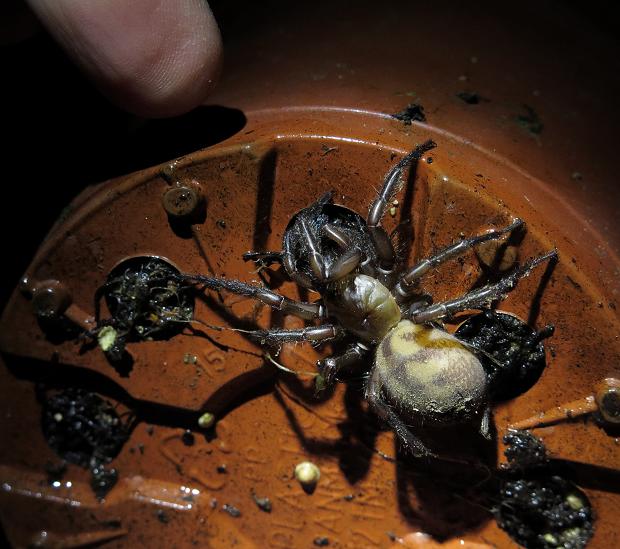 Stephan said he'd discovered a huge and scary spider while moving things around this afternoon.  It was still under the pot he'd moved when he saw it: a Banded Tunnelweb spider.

That's my finger top left, for a size indication.  I didn't want to get any closer.

Eco and his mate haven't been very happy in their seclusion, so I phoned the woman from whom I bought the other budgies and asked if she still had some spare female birds.  She said I could collect another two, so we did a special trip to town to get them.  They are sharp, aggressive little buggers - they'd been in a cage with too many males (and we made that situation worse) and both had a little blood on some of their feathers.  I popped them in with the two males and hoped for the best.  There was no big fight; so far, so good.

The new budgies look quite put out still, but they and the two males are all intact and will presumably settle down together. 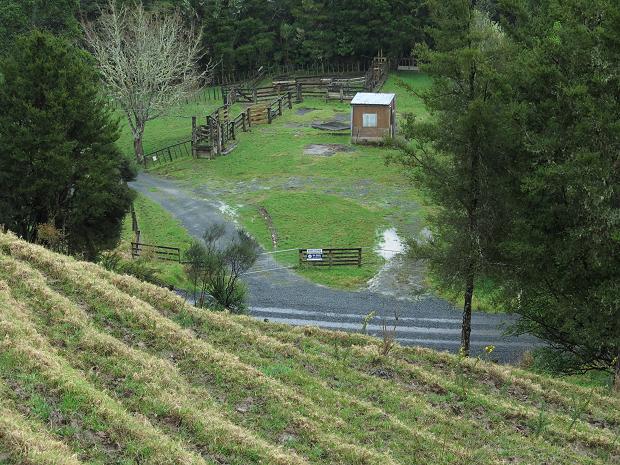 Everything's wet and horrid and I felt really cross when I saw that someone had driven off the metal of the driveway and made a big muddy mess on the grass.  Bearing in mind there are two gates, it can hardly be necessary to drive onto the grass to manoeuvre around another vehicle, if you're too impatient to wait for them to move!

It'll fade pretty quickly, but today it just made the wet grottiness of everything feel worse. 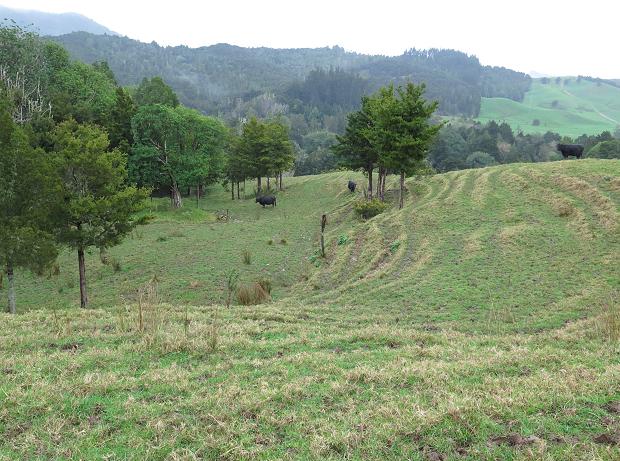 From further back up the hill, it was obvious it was time to move the cows.

My grazing spreadsheet is working well, having indicated that what pasture remained was from today below their maintenance needs. 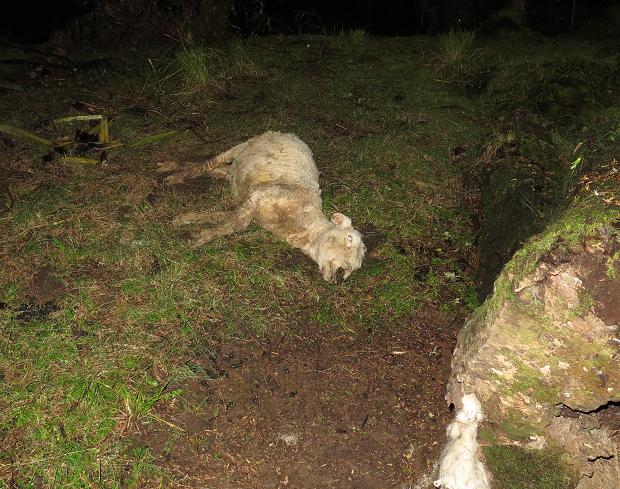 Sometimes we don't quite call time at the right moment.  Yesterday Stephan said Lamb was looking a bit unhappy and in a rush I didn't go and check on her.  When I couldn't find her today, I asked Stephan where he'd seen her last and then we both walked around the area looking for her on the river banks and eventually discovered where she'd finally settled.

Lamb was 13, a fairly old age for a sheep.  We ought to have been more proactive in deciding her end time.  I can only hope she did not suffer, hope that when an old sheep is dying because she's worn out, it is a gentle way to go.