We did something today with which neither of us is very comfortable, but it's going on all around us in any case: we invited some pig hunters in again.  As I understand it, pig hunters have a variety of differently-operating dogs, some will catch and hold pigs (not with their gentle paws) until their owners get to them, some will bail them up somewhere and keep them cornered, others are much more vicious.  Today's hunters' dogs were of the third kind, apparently, and will have killed all the little pigs with which I have been having so much trouble (hopefully quickly) and the larger ones were finished off by the hunters as they found them, but who knows if all the injured pigs were that fortunate?  Those in the latter group were of the sort of size I shot last week, which the hunters left as not being worth their while to carry out.  The only pigs I've ever seen pig hunters bring out of the bush have been large, carried on their backs like back-packs, with their legs tied to form straps for the hunter to take the pig on (usually) his back (like this).

I think it's an incredibly brutal "sport" and I am losing belief in the assertion that it's about gathering food for families, if good meat is left because the animals aren't big enough to bother with.  There was a lot of meat on that little pig I shot.

Food for the hunters is often one of the arguments used by hunting groups against the use of 1080; but the more I learn about pig hunting, the more I am suspicious that it is entirely about entertainment, with little regard for animal welfare of the hunted, let alone of the native fauna which are constantly under threat because of the presence of these introduced pest animals.

But today it was either the pigs or more of my cows which had to go: I was contemplating having to cull an extra animal or two this season because so much of the grass I am trying to grow has been destroyed and those areas will not produce feed for the rest of this season. 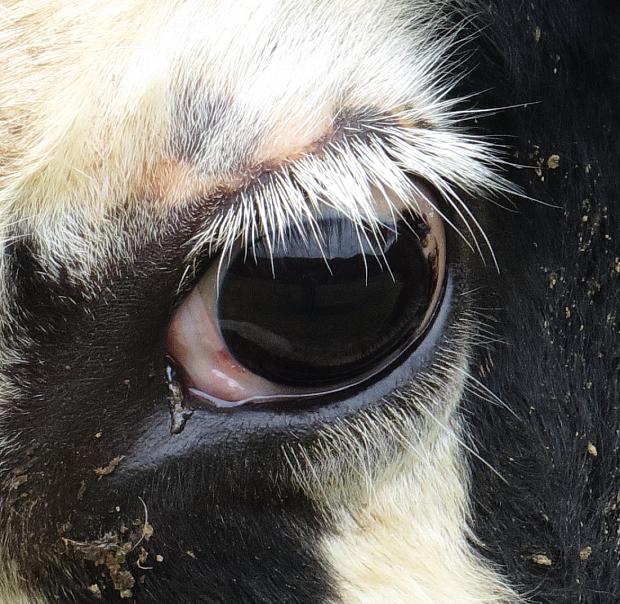 517 was at the top of the Spring hill and I didn't need to climb up there to see her, but she won't be around for much longer so I went to say hello.  Then I took this picture of her eye, because the lesion which was so obvious before seems to have almost resolved.  How extraordinary. 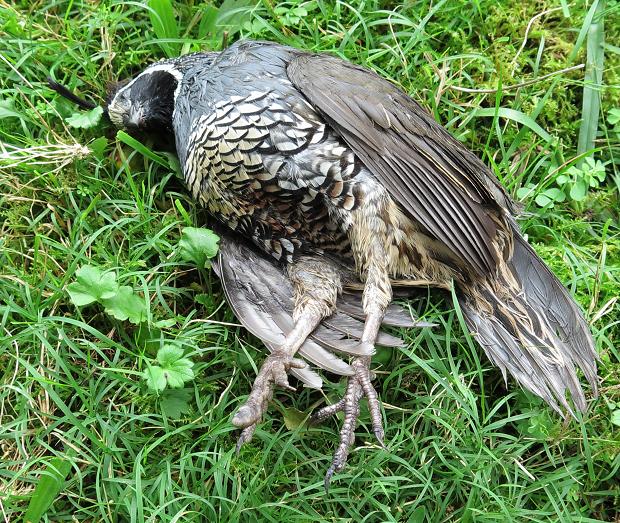 Under one of the fences I found this dead California Quail.  I wonder if it died of natural causes, or did it perhaps run or fly through the fence having miscalculated its path?

Its right foot doesn't look very healthy.  Perhaps that was infected and killed the bird. 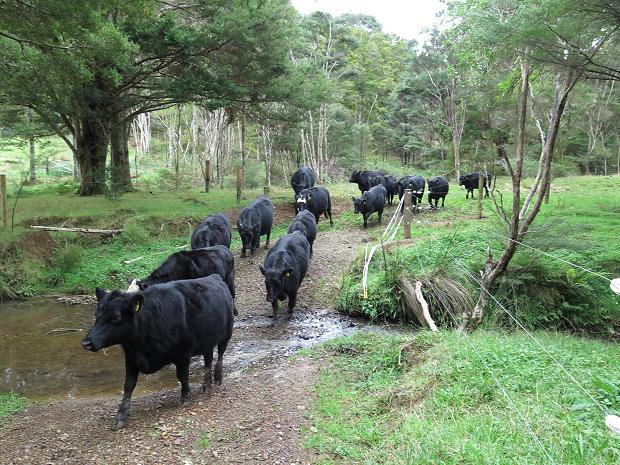 The heifers were keen to follow me out of the Swamp East and so I let them through the new crossing - they're the first to use it with its new fencing - to the Frog Paddock.

Along with fencing the crossings, Stephan has worked to drag as much gravel as possible up onto the approaches, so that when the cattle walk into the stream they don't take a lot of mud on their feet.  Keeping topsoil where it belongs and out of the waterways is a very important aspect of water-quality protection. 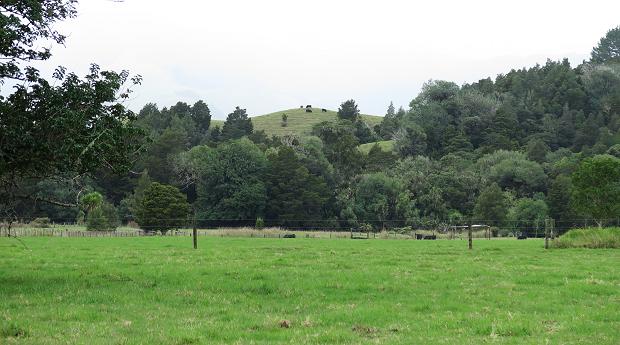 I'm pleased to see the older heifers contentedly grazing on the hill in the distance.  Last time the cattle were in that paddock, they didn't want to graze up there much at all.

Friends Gaye and Brian came for dinner: roast wild pork!  We were unsure what it would be like because wild pork we've had before has had a strong and sometimes unpleasant flavour.  But this was succulent and absolutely delicious and Stephan regretted his generosity in giving all of the rest of it to his brother!  I begin to think that pig hunters, who go after only the largest pigs, usually boars, miss the best of the pork in leaving these smaller pigs behind.  Perhaps they don't consider it manly enough to catch anything less than the biggest, fiercest animals.

Monday the 1st of June

I brought the sixteen young heifers into the House Paddock this afternoon.  I always enjoy having them near the house, because it gives me so much pleasure to watch them. 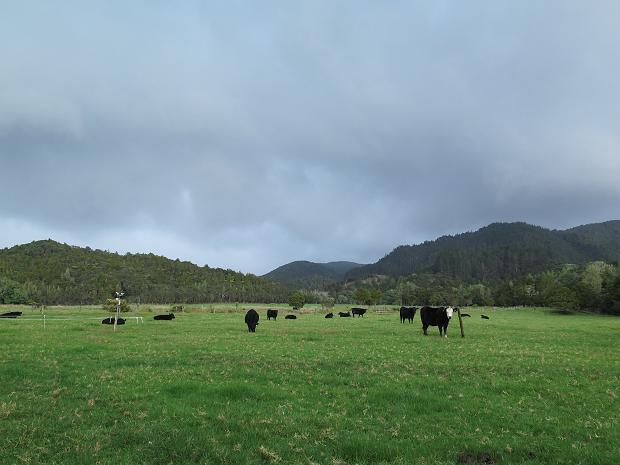 A thundery front passed over us today, but while it threatened heavy rain, we didn't get much.  There was one very nasty, cold downpour for a few minutes, during which all the cattle ran for shelter.

I'm still spending a lot of time sorting out my mother's financial affairs.  I find it all tremendously frustrating.  Her remaining financial resources will be far less than the limit for eligibility for the Rest Home Care Subsidy (which means she will pay only about 30% of the $4,500-odd monthly fee for the rest home in which she now resides) but I've had to provide all manner of documents to prove her position and bearing in mind her own abilities over the last few years, that has not been particularly easy to do.

Stephan's sister, Rachel, is up for a visit from Christchurch, so she and Murray came to dinner and Stephan cooked and glazed a ham.  We still have a few of them in the freezer from our pigs.  I really like ham!

I went off to Kerikeri again for the third and last day of the Understanding Your Farming Business (UYFB) course.  I met and travelled with another woman from just north of Okaihau, which helped with my tiredness later when only having to drive half-way home.

The course has been interesting and I have started to think about our farming enterprise in a slightly different way.  For years we've been farting about (lovely NZ colloquialism) doing things we like, gradually improving the farm, the pastures, the cattle and not worrying at all about how much money it makes because that isn't really our focus.  But I can see that there is probably the potential to do a lot of things better than we do now and that if we did, the farm could support us better than it does, enabling a few more choices in how we live, or in how much we can help anyone else do so.  I begin to see we ought to more efficiently use this fantastic resource, so as not to squander some of that opportunity.  It feels like an interesting new challenge to take on.

I'm being courted by another liquid fertilizer salesperson.  Paul found this site and made contact after reading it, because he feels our ethos fits with that of the company for which he chose to work because it fitted with him.  That's an unusual approach in the farming world and one I like.

We spent a couple of hours together this morning, discussing soil science and different approaches to farm fertility.  I'm better equipped for this than ever before, having written a couple of recent columns for the magazine on just this topic, so Paul's approach was timely and very useful.  I am about to begin reading and researching in preparation for a third column on the subject.

I spent the rest of the day setting up an on-line discussion forum for the Kerikeri UYFB group, since we'd all like to use the contacts we've made for continued support and friendship and we are far-flung around the district. 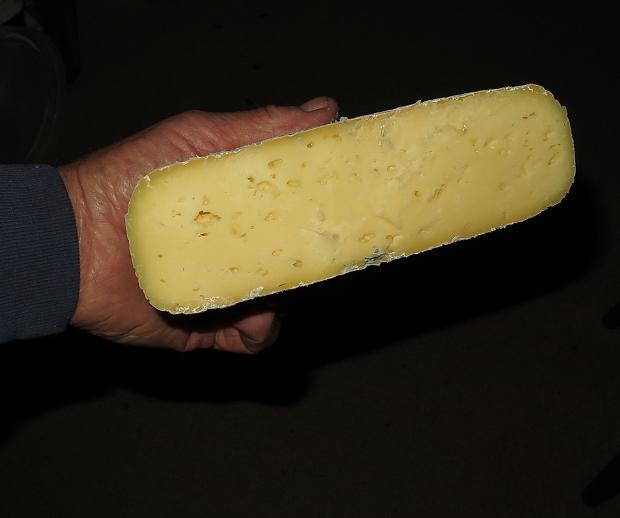 Stephan retrieved this cheese from the ripening fridge, cut it open to see what it was like and was very pleased.  (There's a little greyness on the cut surface because the knife carried some of the mould with it from the outside.)

Cheese-making takes a great deal of time and when one achieves disappointing results, it's easy to think it's not worthwhile, so a good cheese is an encouraging thing.  We hardly buy commercial cheese any more, which saves us a lot of grocery money - of course if one were to calculate the time spent as an earning opportunity cost, it wouldn't look like a good idea, but that would entirely miss the point.  Processing milk into products which can be stored and used beyond the life of fresh milk is hugely satisfying. 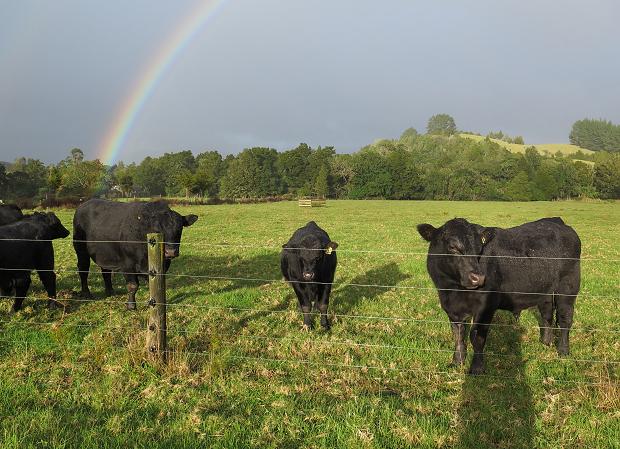 There are pots of gold strewn all over our flats, according to this stunning rainbow this afternoon.  There was no way I could photograph the whole thing and my attempts to stitch photos together were too untidy, so here's one end of it.  The other end came down on Flat 5, then Flat 3 as I moved down along the lane toward the bulls.

I set up my winter grazing area spreadsheet today, which I use to remind me how long any of the paddocks have had to grow between grazings and which helps me calculate how much feed there might be for how many animals for how many days.  It's all screwed up now though by all the riparian fence sub-division and I've been taking the GPS out with me on many walks so I can plot the position of fences more accurately, which will then give me a better area calculation of all the paddocks.