Summer time is always busy and this year I've been very slow in keeping up with the news for the website.  My apologies to loyal readers who may have been waiting! 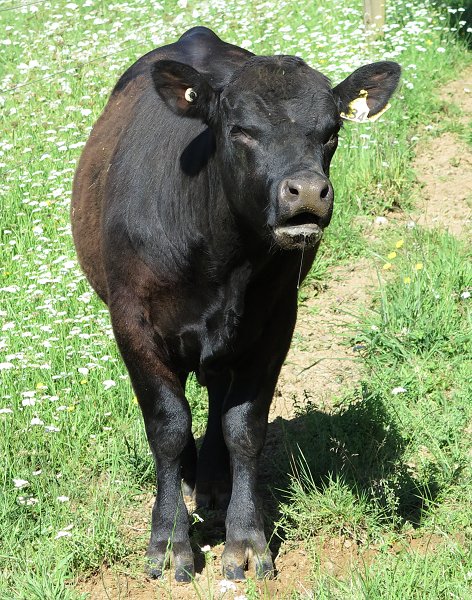 The smallest bull, Emergency's son 134, is a very noisy fellow.

In between busily checking their cows or heifers, the bulls spend quite a bit of time growling toward each other if they're within sight or hearing distance.  It's all quite ridiculous since they've been living together for most of their lives until a few days ago.

I did worry that this little bull wasn't quite mature enough for breeding and (as I'm writing this a couple of months in arrears) he ended up with a number of his heifers requiring a second service in the second cycle of the mating period, but I believe he completed his assigned task while continuing to grow and remaining in good condition. 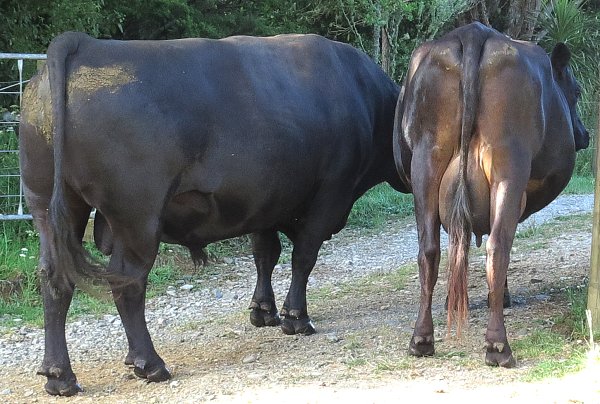 Managing the house cows (Zella and Imagen) and their need for a bull has been a little tricky, since they're the fifth "mob" and there are only four bulls.  I made bull 87's group quite small so they could stay in the paddocks near Zella and Imagen for the first three-week mating cycle.

Zella had shown vague signs of being on heat around three weeks ago, so I've been bringing the bull in to spend the night with the two cows whenever he has appeared to be free of any mating duty with his other six cows and this morning it appeared the time was approaching for Zella.

It appears that mating was successful, so she should calve on or around the afternoon of the 15th of October this year. 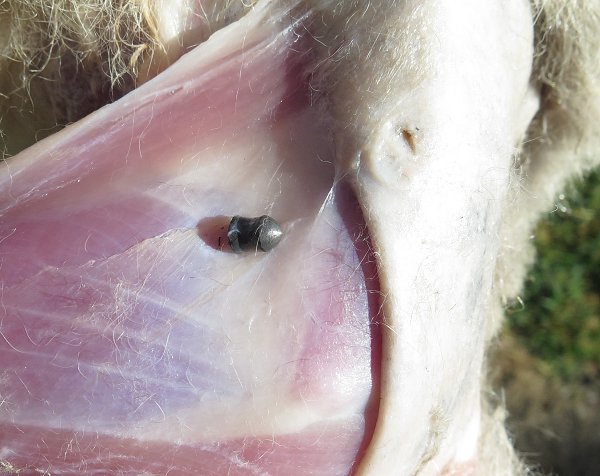 Stephan caught this possum in a live capture trap and after shooting it was skinning it ready to go into salt in the bait bin, but noticed a slug-gun pellet under the skin of its hind leg.  The entry wound was completely healed and the pellet was firmly held by the surrounding tissue. 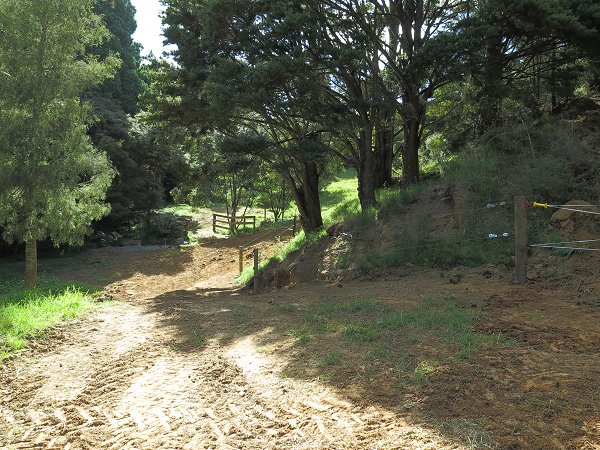 Stephan has been working constantly Over the Road.  Because we have sub-divided the far portion of the area, we needed to create a lane-way through the bottom of the main part of the paddock which could be closed or opened up as required.  Stephan flattened out some of the ground, moved the concrete trough and erected a two-wire electric fence with three gateways where the cattle most easily go up and down the hill - and the fourth gateway which already existed opens to the sub-divided paddock.  When the cattle are in that far portion, the gates to the hill are closed and they have access to the concrete trough and some extra shade under the big trees.

Because the fence is short and has only two electric wires, it was easy enough to make it in small sections with tape gates between.  I did not want to create confusing barriers to normal cattle movements which would create stress for them and annoyance for me.  Now I write this, the description seems inadequate so I shall create a diagram for further explanation, see below.

The picture is taken from just beside the old trough location, with the gate just shown at right leading up the steep cattle track. 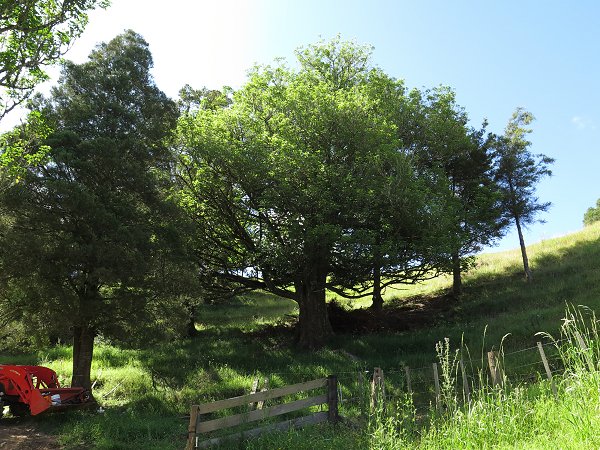 The protection of this tree is the next job (as shown above).  It is another Puriri, one which hasn't sustained a great deal of trunk damage from the cattle, but which will still benefit from having its roots protected from their hooves. 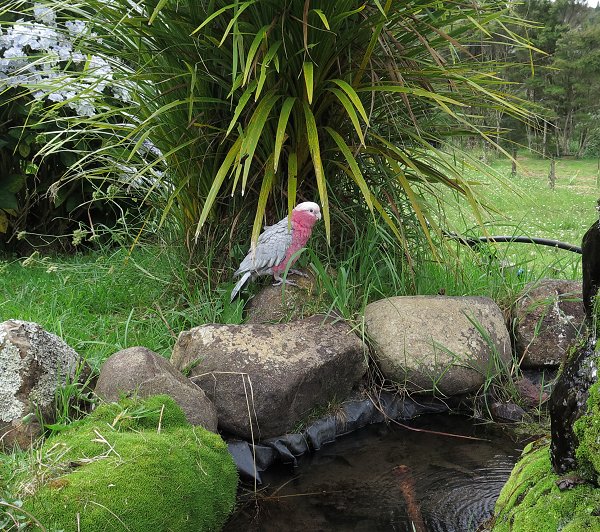 An exotic visitor!  This is Floss, who belongs to Jude and arrived on holiday with Rachel, who is looking after Floss and Cecil "not really quite a dog" (as Jude describes her Chihuahua when she wants me to bend our no-dog farm and house rule).

Rachel is back from her first term's teaching in Abu Dhabi and came up with Issa and his girlfriend Tegan for a few days with us.

Floss has clipped wings to stop her/him (nobody knows) flying very far, so could sit out here by the little pool quite safely - except later Tegan brought her in all wet, after she apparently tried a bit of bathing and fell in. 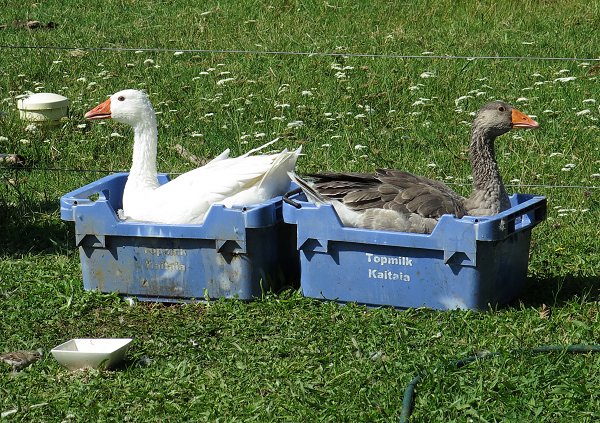 Since the geese won't swim in the pond but like to bathe in their Topmilk bin, I brought them a second one and they immediately began his and hers bathing sessions. 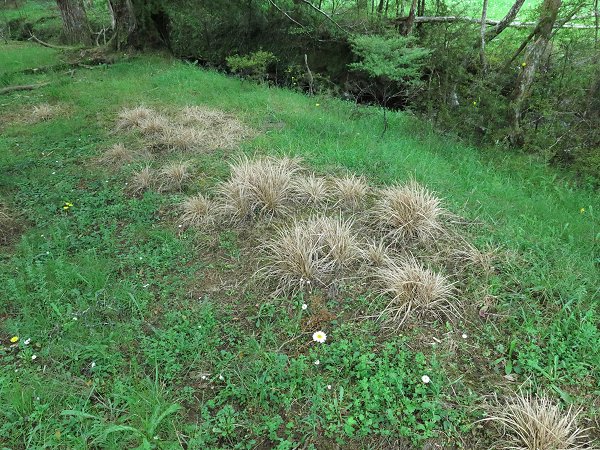 A dead sedge plant is the best type.  My weed-wiping appears to have been very effective in the Back Barn paddock.  Naturally I have failed to return and continue the task. 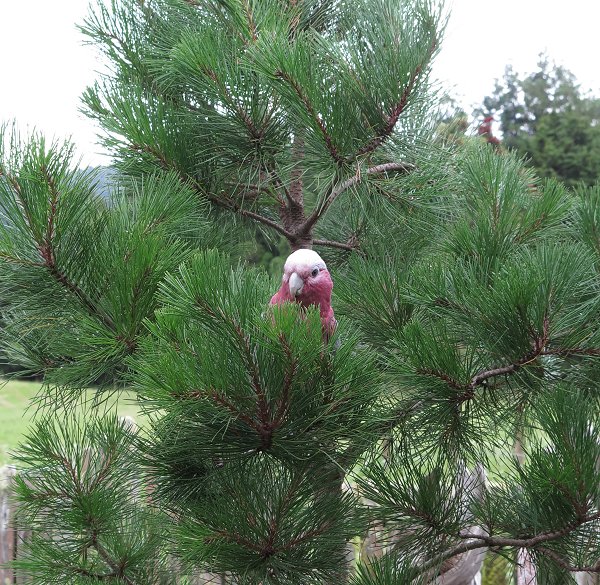 Rachel, Issa and Tegan went off to the beach, so Floss spent a couple of hours in the Christmas tree while I potted plants in my greenhouse.  She seemed to enjoy being outside in unusual surroundings. 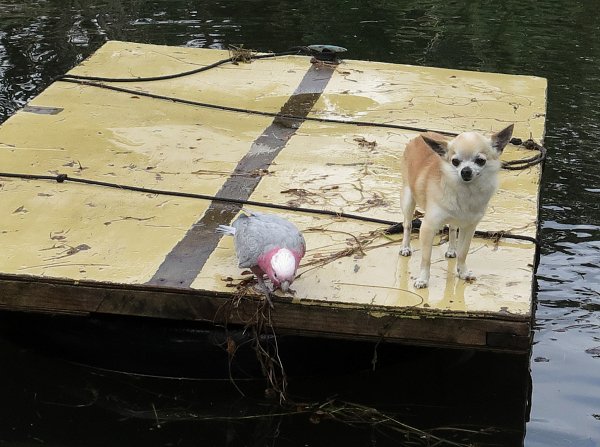 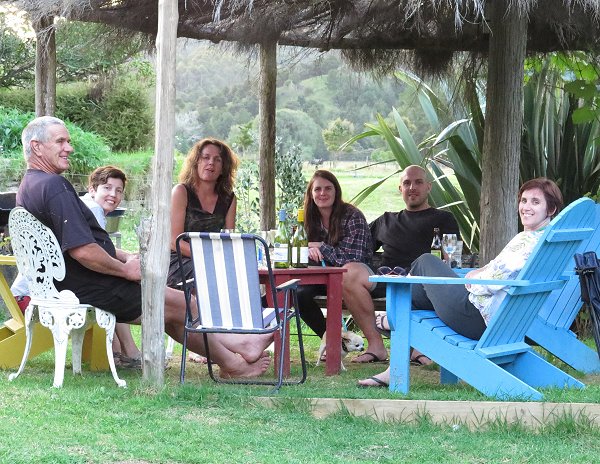 Long-ago friend Karen and her wife Suze arrived this afternoon for the night, on a whirlwind trip around all Karen's old friends and Northland. 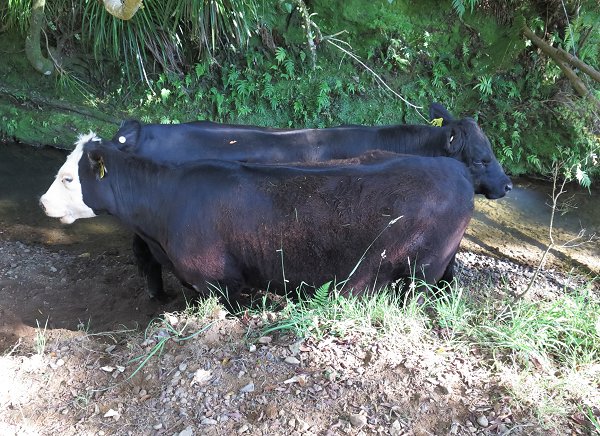 Rachel, Tegan and Issa left for home and we took Suze and Karen out for a walk through the lovely Bush Flat reserve.

Young bull 134 was having a romantic morning with white-faced 746 as she started coming on heat.

There's still a portion of the stream the cattle have access to here around the crossing (and the only drinking water in the paddock at present) and we may need to look at whether we should manage that better.  They do enjoy standing in the water in hot weather, but they never just stand... 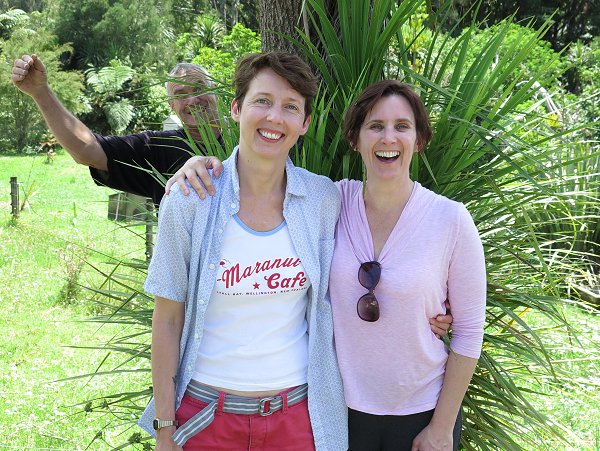 Once the Queen had done it, Stephan obviously decided photo-bombing was acceptable.

Suze and Karen went on their way again a little later than they'd meant to, just after noon. 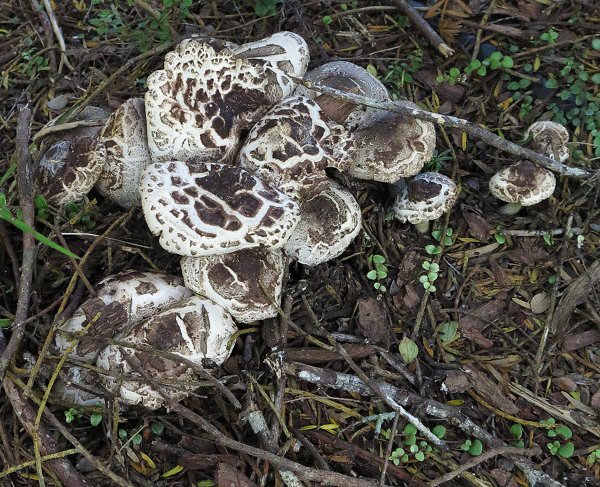 One day, when I've finished being busy with all the other things, I think I'll learn about fungi.  They're so varied and interesting.

While walking through the Back Barn where I found these fungi, I kept hearing a really rusty-sounding Tui.  I spotted it in the Eucalyptus trees on the boundary, flying with another bird which was presumably its parent and the dodgy-sounding call was the young bird practising its new singing skills.

Stephan drove over to Kerikeri this evening to the airport to pick up Miryam.  I'd had to get off my bike and sit on the ground for several minutes the other day when I felt all faint and woozy, so wasn't feeling confident about driving for three hours.  We haven't seen Miryam since 2007, so I'd been looking forward to this visit. 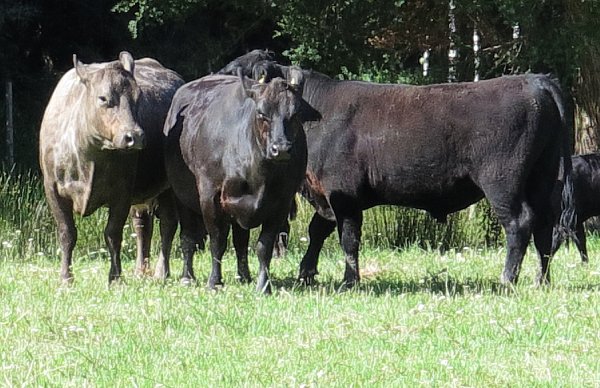 When I checked on bull 133 and his mob, he was interested in Curly, grazing closely with her.  701 was sitting under a tree, apparently quite quietly, until she got up and held her tail out at a tell-tale angle and walked directly over to the bull.  She'd obviously already been mated, but was still very interested in some more action!

133 is Imagen's son and he's growing into a large animal.  He's just under 14½ months old and I'm really looking forward to seeing his calves. 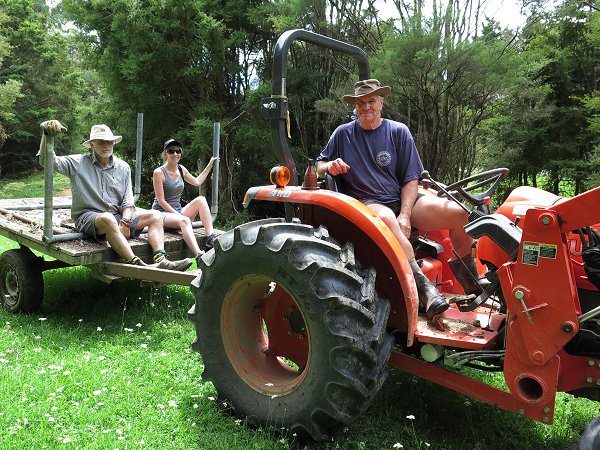 William and Elizabeth came out to get some firewood from the Middle Back paddock.  Elizabeth and I opted to drive out in the ute, a more comfortable option than the bouncy trailer! 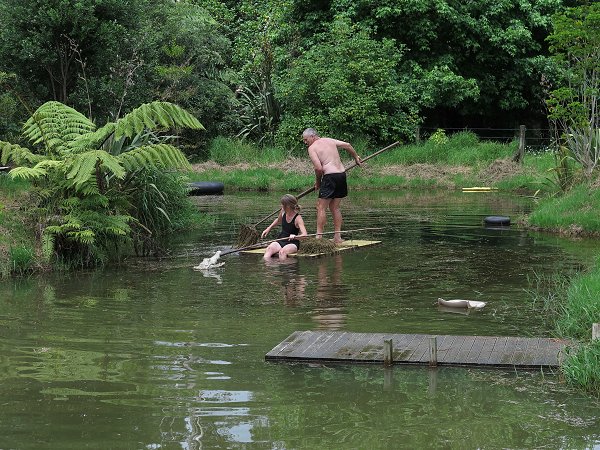 Pond-weeding continues, particularly if someone else is keen to do a bit of it.

Miryam and Stephan spent ages in the pond during her stay, pulling out great mountains of weed. 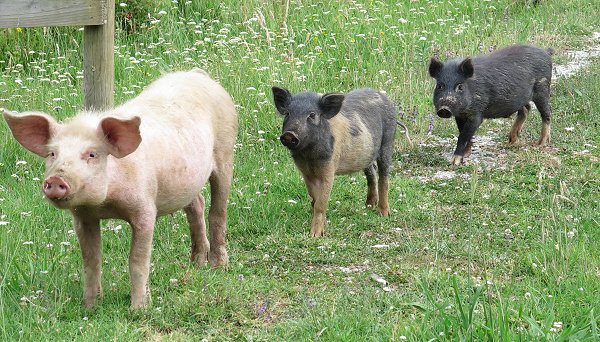 The cattle out on the flats suddenly looked oddly interested in something, which we went out to investigate and found these three pigs straying from the neighbours' place.  We chased them home and hoped to frighten them away for good.  Over the next four or so weeks they returned repeatedly, despite our request that something effective be done to restrain them where they belonged.

Bearing in mind the number of feral pigs we have to contend with on the pastures out the back, I decided not to be too worried about these in terms of disease risk (primarily Leptospirosis) and as their noses have wire rings, they weren't doing any damage other than eating our grass.  I'd rather they weren't here though. 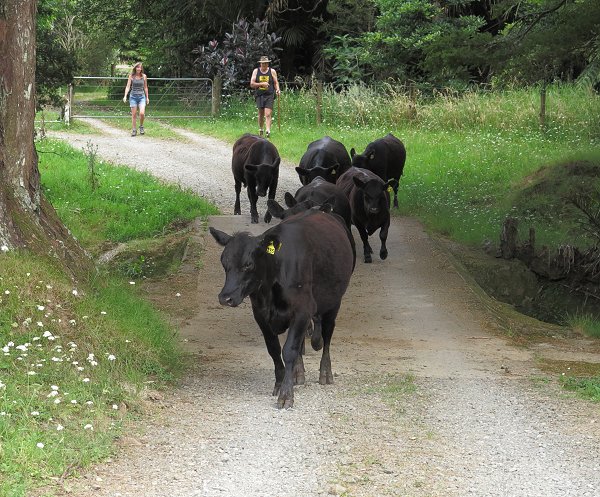 With the essential fencing Over the Road completed, we brought the unmated heifers off Jane's place and put them across there.  They appeared a little confused about the new arrangements, but soon figured out that the trough had moved but was still good for drinking.

Miryam and I walked along the road to see where Stephan had begun fencing preparations at the other end of the big hillside paddock, then carried on up the hill to pick ragwort.

While I'm not terribly keen about spraying being done on the boundaries without our knowledge, I was rather more pleased to see evidence of this sort of ragwort control than that which I found a couple of years ago. 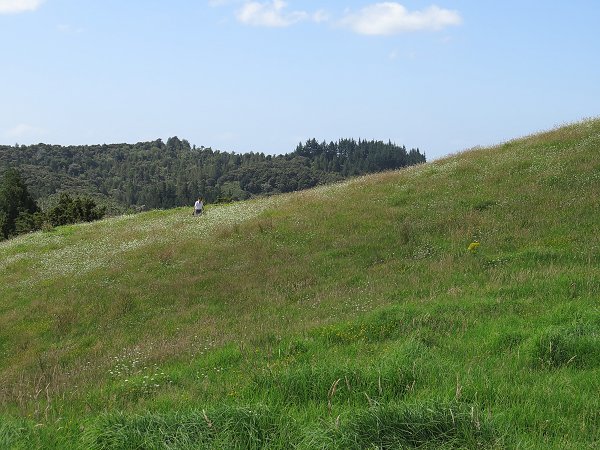 There weren't many plants around, but with the wind up on this hillside, any seeds would be carried a long way. 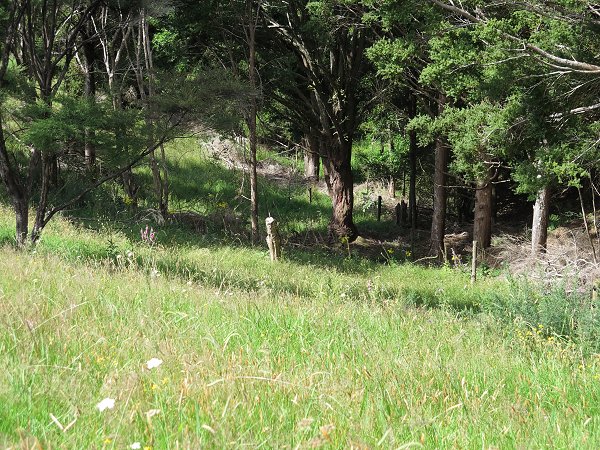 Some areas are good indicators of our overall progress in controlling the Ragwort problem.  Last year I spent a couple of hours on this slope alone, clambering around carefully bagging seeded plants and fresher flowers and pulling and hanging the plants in the trees.  Today it took Miryam and I only a few minutes to collect up the flowers and remove the few plants. 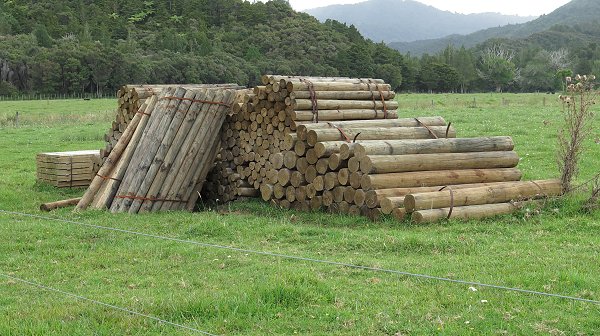 Our pile of posts is beginning to get a little smaller.  They were never meant to sit here this long!