The week beginning the 5th of December 2015.
Saturday the 5th 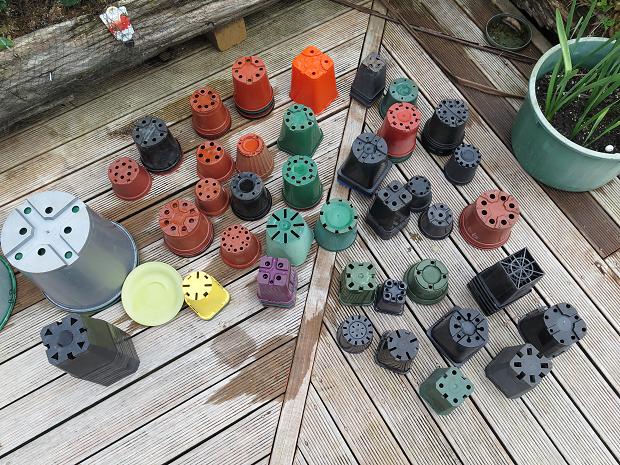 In the country, we make our own entertainment: which ones of these are just like the others?

Stephan has begun putting together the requirements for an upgraded sprinkler system for my greenhouse, which I currently have to water by hand and which I'm likely to forget to do often enough over the summer.  That has prompted me to tidy the place up and the first useful job is to gather up all the empty plant pots and clean and sort them, before putting them back where they ought to be, rather than thrown under the benches pending later use.

Who'd have thought there'd be so many minute variations in plastic pot design? 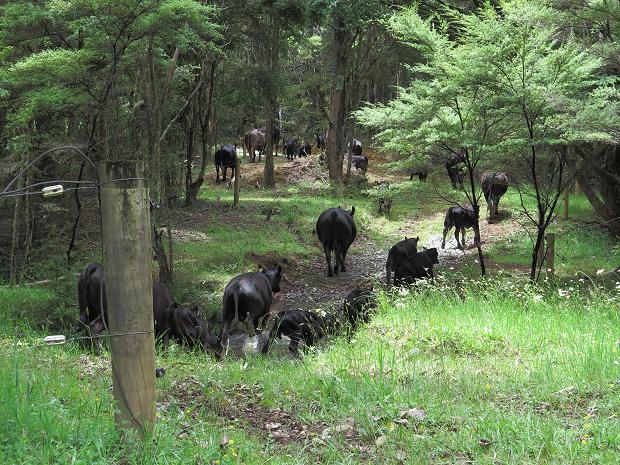 This is the first time these calves have been through this crossing and up the short connecting lane to the Swamp East paddock, so I kept gentle pressure on them from behind, to keep them moving down and through the stream. 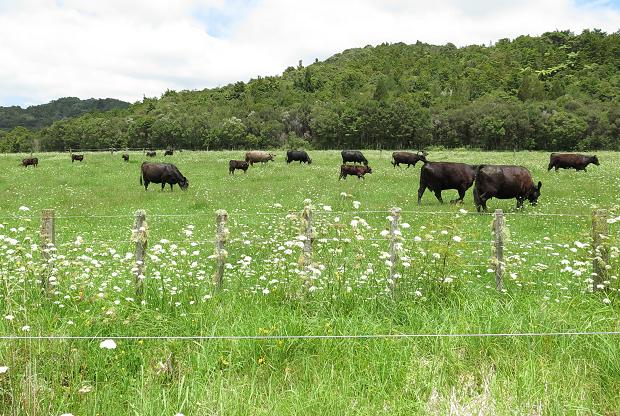 The other lot are out on the flats.

Along the fenced-off drains, the Parsley Dropwort plants are much bigger and more mature than those in the paddocks, where the cattle kept them grazed down during their first growing phase.  With fewer cattle than we used to have, there are more flowers in the paddocks than there used to be, but now we can remedy that by mowing. 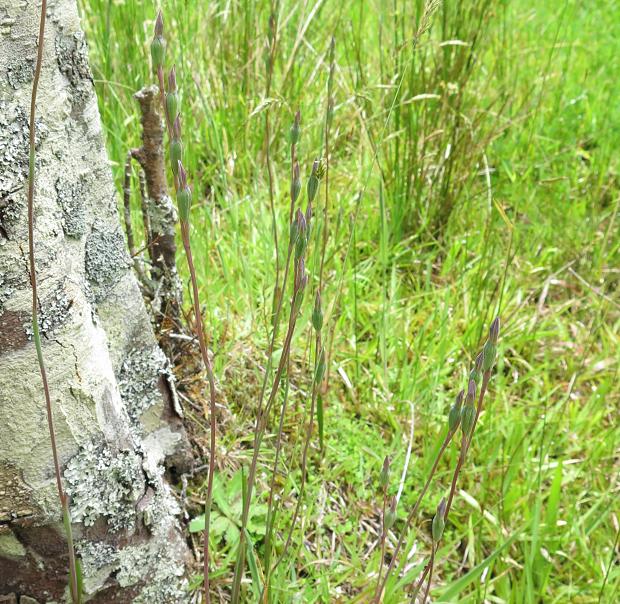 It would have been lovely to see this lot of plants blooming, but the weather has been too cool and cloudy over the days they would have been ready.  They self-pollinate when unable to open, so the green ovaries are now developing their thousands of dust-like seeds. 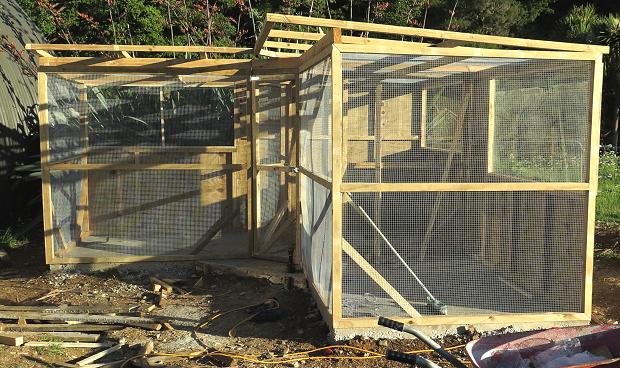 The aviary is now completely enclosed by wire mesh, glass and plywood.  The mesh goes right over the ceiling, to prevent the entry of rodents which will easily climb the walls.  In the floor, the drain holes will be covered by bolted wooden flaps to prevent rats coming in that way. 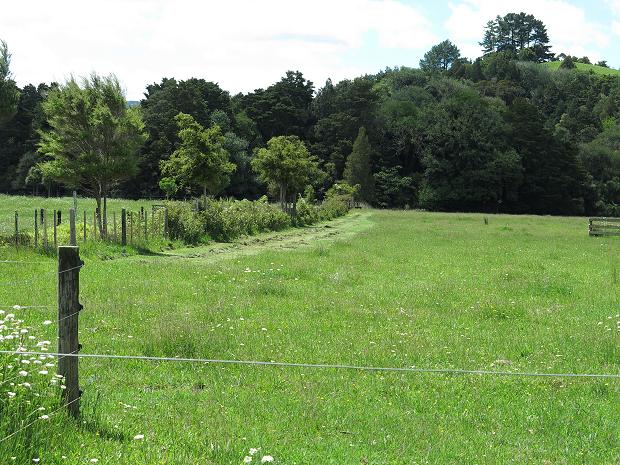 The mower's first job this season was to cut a strip up the edge of Flat 1 to mow down the straying blackberry plants which make picking those along the fence a hazardous job for summer-bare legs and sandalled feet.  Blackberry spreads really quickly and we didn't want to spray those plants, so close to the fruiting ones from which we'll eat. 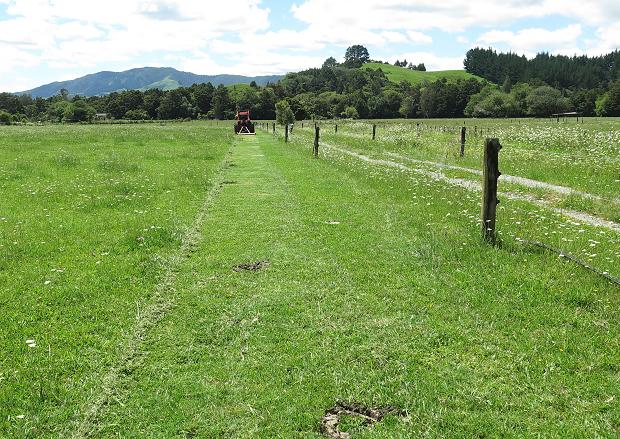 Then out into the Windmill Paddock and a couple of test strips to decide how high to set the blades.  The point of mowing is to cut down the white flowers and their stems, not cut the grass or clover, so Stephan set the blades back up a notch from this strip.

Cutting the grass too short at this time of year is risky, since we don't know when there might be more rain.  Grass plants grow more leaf from more advanced plants so cutting the grass back would mean the pasture would take longer to recover and there may be only a short window with sufficient moisture in which to do that.  The clover plants are also probably under a bit of stress from the root weevil, so looking after the clover is sensible - and removal of some of the tall stems shading it will help it a lot. 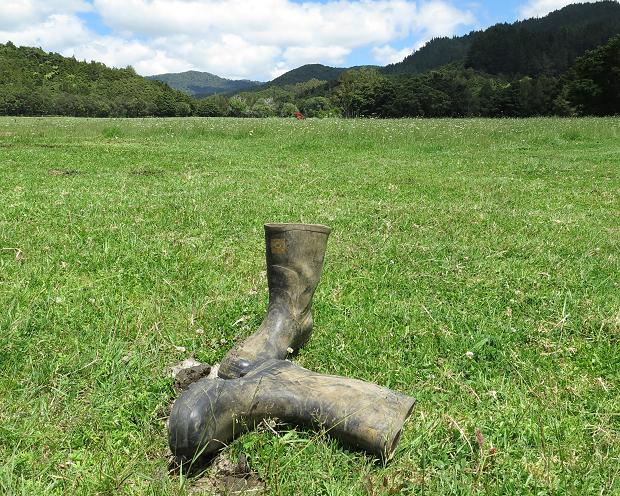 By the time I came back from checking some orchids, Stephan had tossed his boots off because they were too hot.  Without a sun shade above the seat, he needs to ensure he's adequately dressed to prevent getting too hot or sun burnt.  A tractor sun shade is probably getting close to the top of the shopping list. 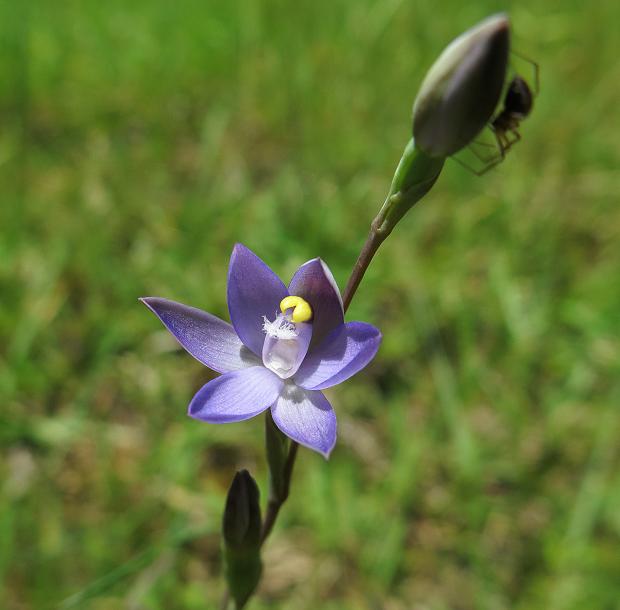 This lovely flower was in the top corner of Mushroom 1, gently waving in the breeze amongst the grass flowerheads.  I had to look carefully to find it, knowing there had been some plants there in other years. 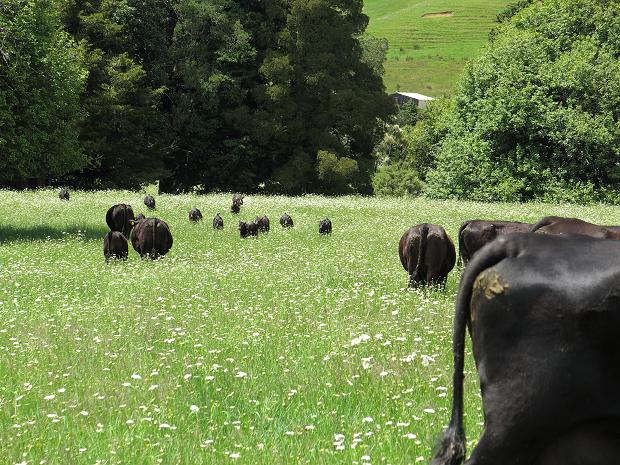 The cattle have some shade in Flat 5d but it's not really enough for them all to relax with comfortable personal space, so I moved them across to Flat 4 where they would have more options.  Despite the heat, the calves took off at a gallop, exploring the range of their new space.

It's an easy paddock to get them out of and at 5pm when the heat had reduced a little, we walked them all in to the yards and gave them their 7in1 vaccinations, inserted their NAIT tags and castrated the bulls. 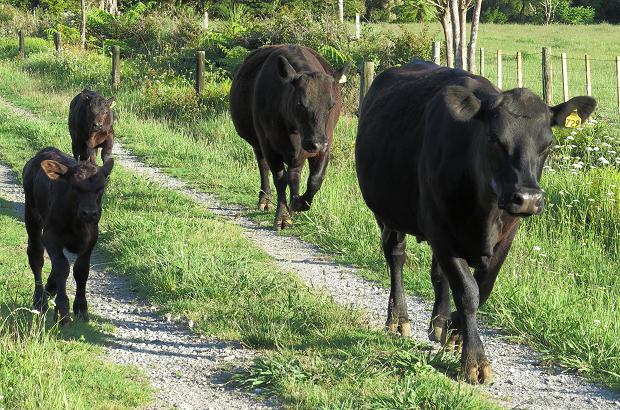 Little Big Ears, 729's daughter, is still only three weeks old, so she'll have to wait to have her vaccination until next time they're in (they need to be at least four weeks old).

729 and 710 and her backwards-born son 504, went to spend the night in the paddock next to the big mob, ready to be mixed with them in a day or two. 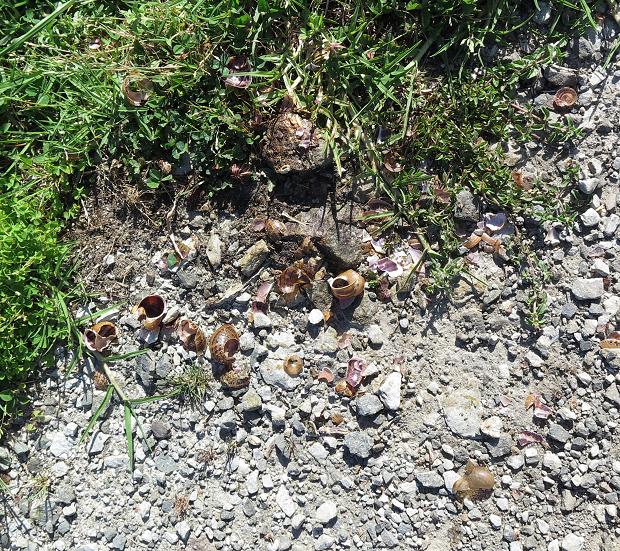 Walking along the lane we kept noticing collections of broken snail shells.  Then Stephan noticed that in every case they surrounded a very mucky-looking pointed stone.  The clever Song Thrush gathers snails from the long grass alongside the drain and brings them to its chosen stone to smash the shells and extract the snail body.

On a couple of subsequent trips along the lane, I saw a Thrush fly off carrying something which was probably the remains of a snail. 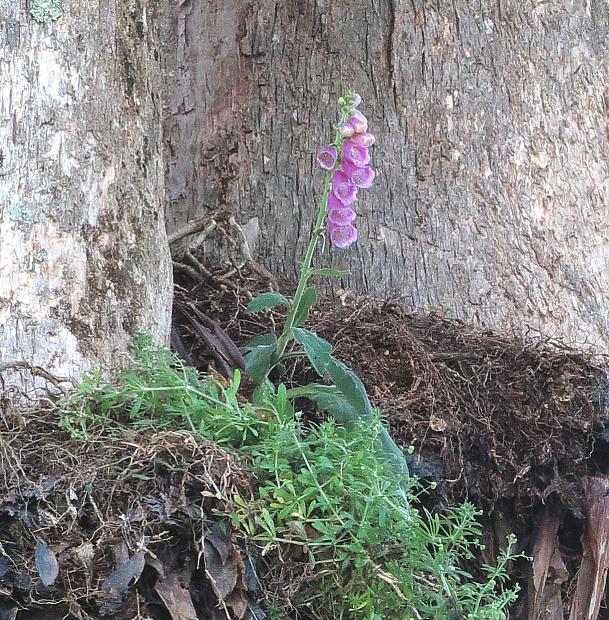 Some people attempt to control Foxgloves but they'd be hard pushed to get this one ... 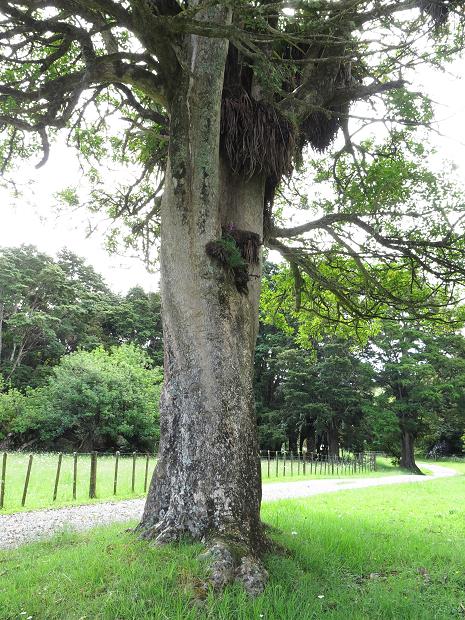 ... half-way up the big Puriri out on the driveway!

Here they mostly grow in the shady places under the Kanuka and as the cattle leave them alone, don't cause any problems, so we leave them alone as well.  It would be a big job to try and eliminate them.  Some fights you don't even take on. 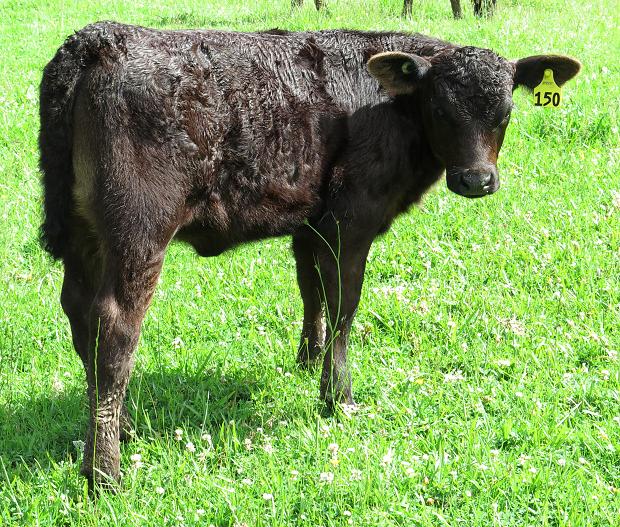 Emergency's daughter 150 has a curly coat.  She looks a bit different from most of the other calves. 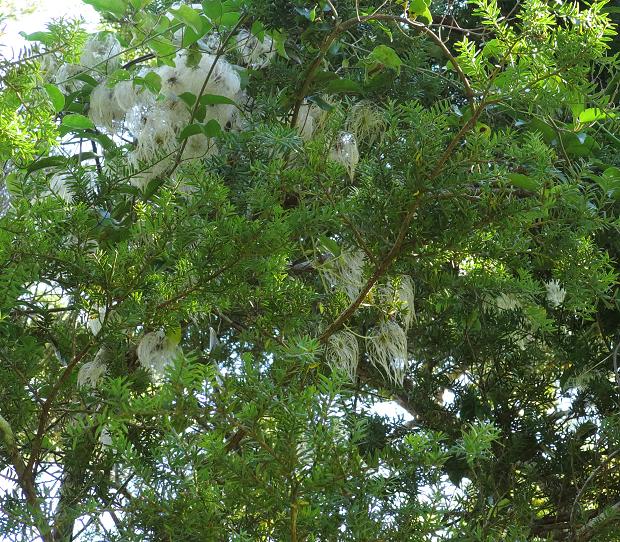 This is the Clematis vine I photographed a month ago when it still had some flowers and I wondered if there were actually two separate plants here; now they've all seeded, it's obviously one female vine.

The seedheads are too high up to reach but I'll look out for any seeds which fall and aren't carried too far away on their feathery threads. 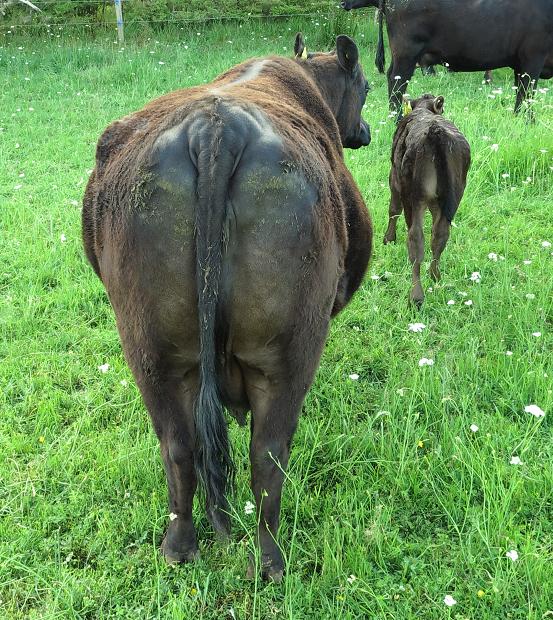 701 is still as fat as ever.  She has an unusual lump over her left hip bone.  For a while I thought it was just fat, but now I think there's something weird about her hip structure.  Maybe she was hurt or something?  Sometime, if she and the vet happen to be in the yards together, I'll get him to have a look at her.  In the mean time, she's not bothered by her odd appearance. 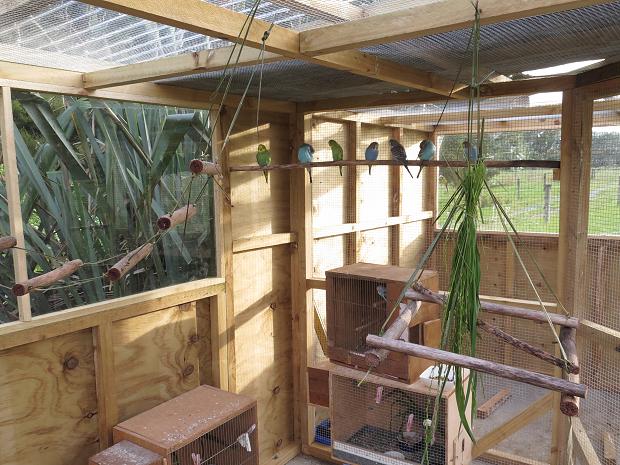 I couldn't wait any longer: as soon as Stephan had put enough roof cover on part of the new aviary, I moved the first birds in!

A couple of hours later as I sat working in my office, a quick movement outside caught my eye: a stoat had run past the back of the aviary, then turned and came back around the front, peered at the birds from the doorstep and then ran off around the back again.  A few minutes later it did another circuit of the aviary, obviously looking for a way in!  Was there a stoat menu board somewhere to which Budgie had already been added? 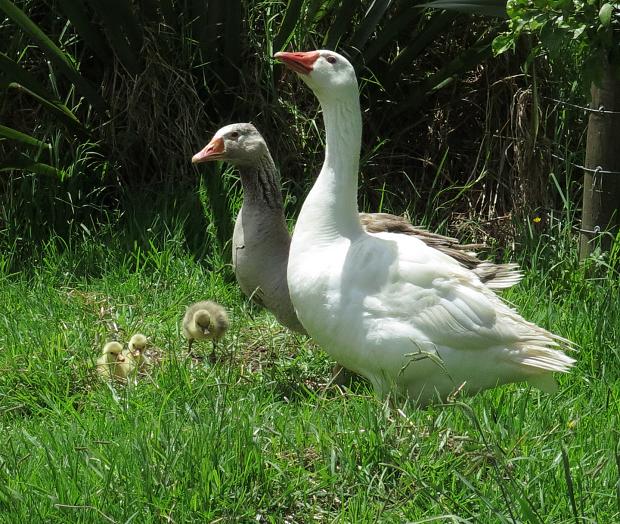 William was mowing the grass down by the pond and when he came up to the house asked why we hadn't mentioned the goslings?  I didn't realise there were any!

Three hatched, two dead chicks partially out of their eggs and two unhatched (infertile, I think) eggs.  The two adults are now even more determined to attack anyone in their vicinity. 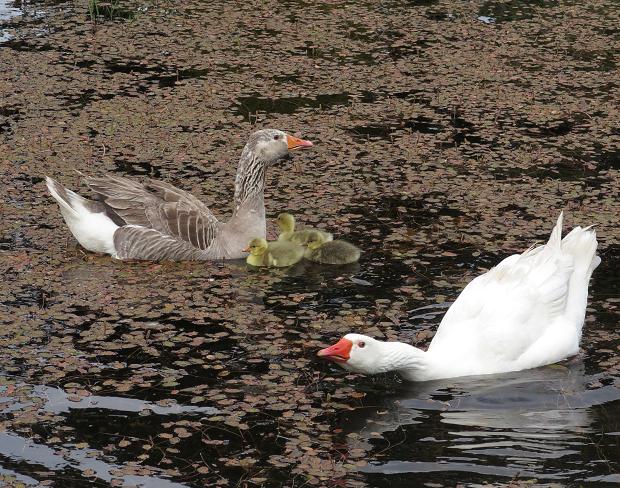 But oh so cute!

I think, being darker than yellow, that they're all female, which suits us well.  When Mr Gander is gone, there won't be any more. 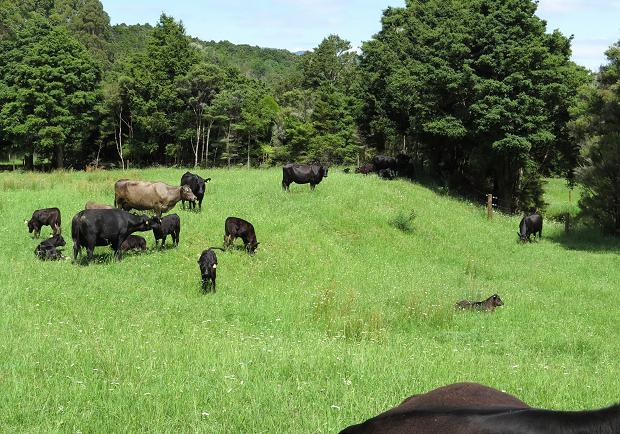 On a warm afternoon I was interested to see some of the cattle quite happily sitting out in the sun.  According to my unreliable weather station, it was around 18°C (in the shade the day's high was 15°) with a relative humidity of 51%.  I wonder what their threshold for shade-seeking is?  It's not something I've thought to measure before in terms of the actual temperature and humidity of the days when they do all disappear into the shade.

I had to submit to a small surgical procedure today, requiring a general anaesthetic.  Unfortunately some medical professional had once told me, attempting to soothe my anxiety about some other surgical intervention, that the anaesthetic itself was the most dangerous part of going into theatre; and I've never forgotten it.  Convinced it was my last morning on earth, I lay waiting in the Day Surgery bed, knitting a sock for friend Gaye.  It seemed the reasonable thing to do.

I woke, felt sick, waited for my dearly beloved but absent partner to return, wept pathetically when he did and then came home.  Drugs do weird things to one's brain!