The week beginning the 8th of August 2015.
Saturday the 8th 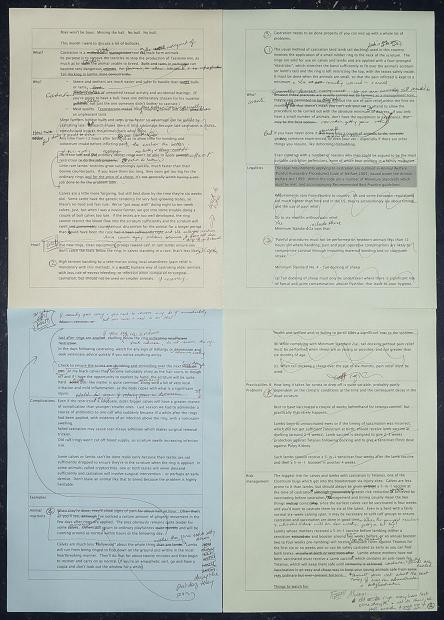 Yesterday I worked for most of the day on a magazine column and today, after a better night's sleep, had to pull this lot together.  I still find it useful to work on a printed copy as part of the editing process.  I tend to write in a stream and often find I've referred to things more than once and it's those paragraphs and sentences which I spot in print and find easier to relocate than I would working on the computer screen.

However this lot was rather messy and taking a break between working on the paper draft yesterday and moving it all around in the computer document today got pretty confusing! 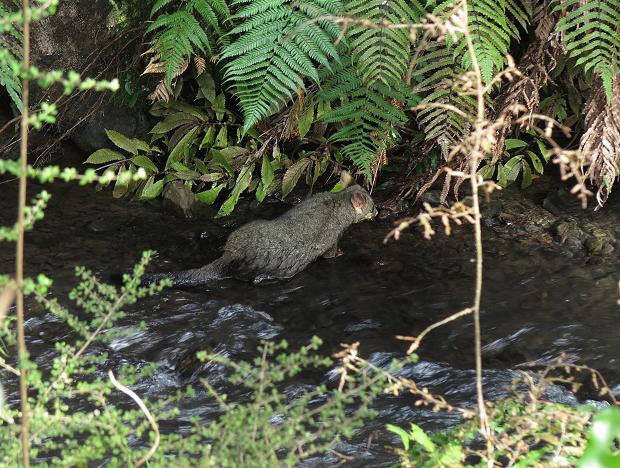 I took a break and went out for a walk to check on some of the heifers.  I saw what looked like a dead possum lying by a tree and nudged it with my foot and then noticed its laboured breathing and bloodshot eyes.  I suspect it had eaten a lethal quantity of anticoagulant poison from one of Stephan's bait stations.  It's not a nice way to die.

The possum then struggled its way toward more cover, fell down the bank and into the stream and I watched as it crawled its way across to the other bank.  It will have clambered into a hollow, curled up and waited to die.

Situations like this make me wish it were legal to carry a pistol - light, portable and deadly.  I had nothing with which to put this poor creature out of its misery.

Yesterday I noticed light yellow pine pollen on top of one of the troughs: the pine trees are in full production this year. 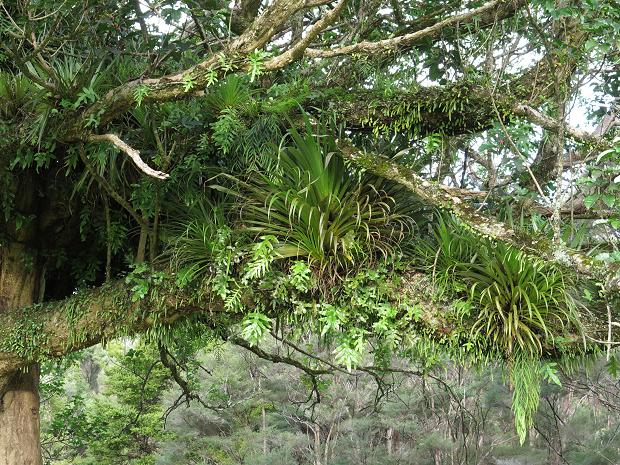 This is the big Puriri which grows out in the open in the Bush Flat.  It has an extraordinary population of epiphytes growing on it. 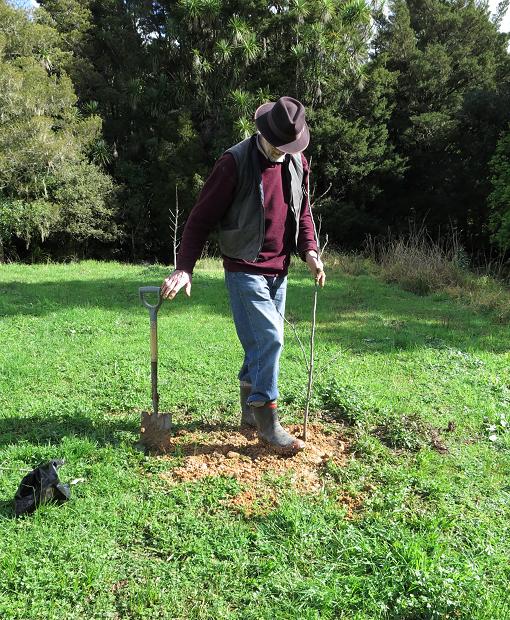 William and Elizabeth arrived with another couple of trees for the orchard, this one a Pecan nut.  The other is a Pine nut, which was quite small, so I took it home to grow on in a pot for a while before we plant it out in the open. 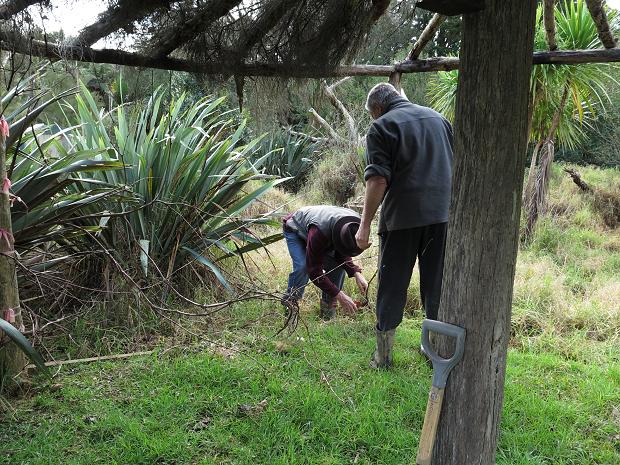 William has grape experience, so pruned the grape vine Stephan wants to grow over the gazebo.

We'll have to issue guests with special long tongs so they can sit comfortably in their shaded chairs and pluck grapes from above their heads, as they sit relaxing by the pond ... 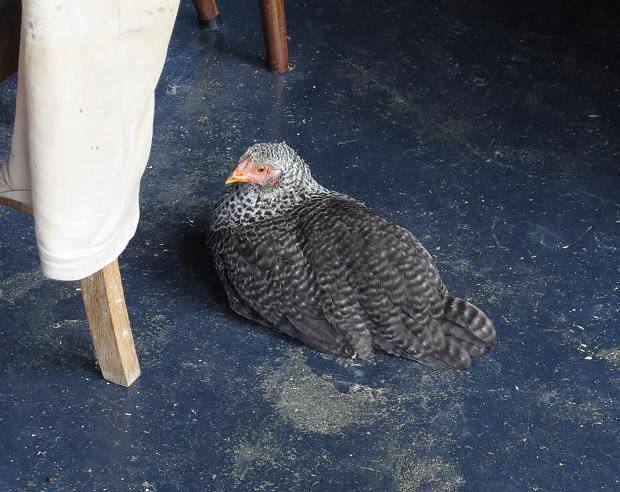 Our dark painted concrete floor is always very warm on sunny days and the young chicks enjoy sitting here.  They seem to think we don't mind in the least.

I had plans for the next couple of days, including a quick overnight break away from the farm.  Stephan decided we should go and hang out in the hospital instead, while he suffered a pain which eventually went away on its own.  Some other old guy later commented, "you're not used to being over 60 yet, are you?"  The hospital gave him a couple of pain-killers and left him lying down for a few hours until a doctor came for a look and pronounced him free of any alarming problem.  I knitted a sock.

Poly is hurt!  For a while I thought there must have been a big fight while we were out yesterday afternoon and evening, but eventually concluded she had probably suffered a prolapse of her oviduct while laying an egg.  I hope there wasn't a fight as well, which brought that on.

Being unsure what to do, I put the original cage inside the aviary and quietly caught her and put her inside, then added Eco, since he and she are so firmly bonded.  But by Wednesday morning things looked worse, so I caught her again and very sadly put her to death.  Reading various information on prolapses in budgies, the prognosis didn't look terribly good even if one could find an avian vet, which we don't have.  I'm very sad that another of the original birds had perished.

This evening I was shutting some cattle into a paddock at five minutes to six and it was still light!  It's a lovely, hopeful feeling when the days begin to lengthen.  Spring is on its way and the misery of August will eventually lift. 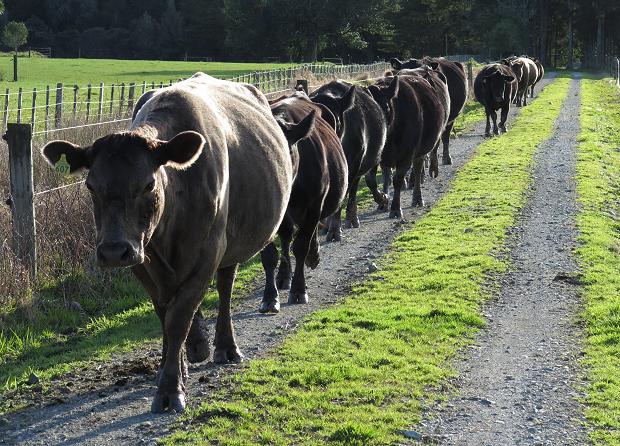 There are some visible ribs in this line, but they'll be alright again by the time calving is due.

The cows came forward from the Pines where I'd pushed them a bit, hoping they'd venture to the top of the hill where there's still some grass.  I planned to let them graze the driveway overnight.

In one month we will have a party, so we're working toward a tidier house.  Stephan has been finishing some big storage drawers for which I've been waiting for three or eight years.  Doing some vacuum cleaning this evening (I thought if I did it at night I could pretend I was already asleep, so not notice I was doing housework), I sucked up a lot of spider webs from corners.  Then a very large black creature appeared on the wall: a Whitetailed spider, which I promptly sucked into the machine.

As I was leaving the room, another bigger black shape was moving up another part of the wall, barely able to carry her heavy abdomen in line with her body.  I grabbed this plastic, lidded container and caught her.

Whitetailed spiders strike fear into most people with the rumours of ulcerated bites, often while sleeping because the spiders regularly crawl into beds.  They're hunters, reportedly eat Daddy Longlegs spiders in particular, which inhabit every corner in our house.  I figure the two I saw came out because they sensed I'd depleted their store of other spiders!  Horrible things.

I started early this morning and yarded the cows who were all sitting around in the sunshine in the roundabout by the front gate.  I have left vaccinating the cows for Leptospirosis very late, through inattention and general winter glumness.  Yesterday I organised for Stephan to collect the vaccine from town so we could get it done today, since fine weather was forecast. 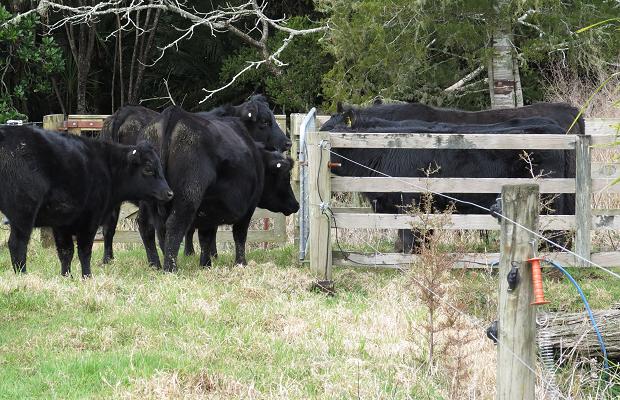 Bringing the young heifers in excited the interest of the bulls, three of which came dashing to the gate.  Fortunately none of the yearlings was on heat, or I'd have had to be a bit more careful here to ensure none of the bulls was tempted to try going over the gate.  I want to avoid them learning that inconvenient trick.

There were six separate mobs to do: the cows (12), the bulls (6), the older (R3/4) heifers (15), the younger (R1/2) heifers (16), the non-breeding heifers (3) and Zella and Imagen.  It was five o'clock by the time we'd finished the three heifers and I could then tell there was enough vaccine left (I worked out there were two shots in the vaccinator gun and another one or two in the tube) to do Zella and Imagen, so Stephan went out and brought them from the back of the farm.

I'd bought enough vaccine for 56 shots, but if the dose in the gun is slightly out, it would be easy to use up the two spare shots before everyone got their dose.  Getting everyone done in one day was very satisfactory. 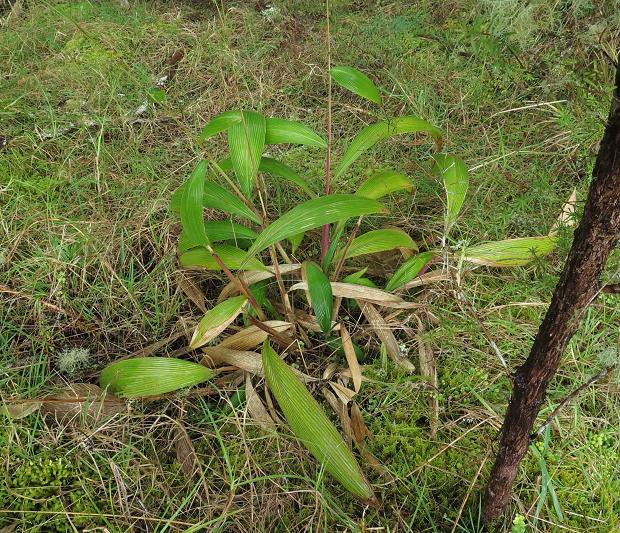 Strange plants tend to stand out and here is one I didn't recognise: Palm Grass, Setaria palmifolia.

There was no way it was anything native so Stephan pulled it out by the roots, along with a smaller neighbour.  We will watch that space for any more of these plants.  Goodness knows how it got here.