The week beginning the 2nd of January 2016.
Saturday the 2nd 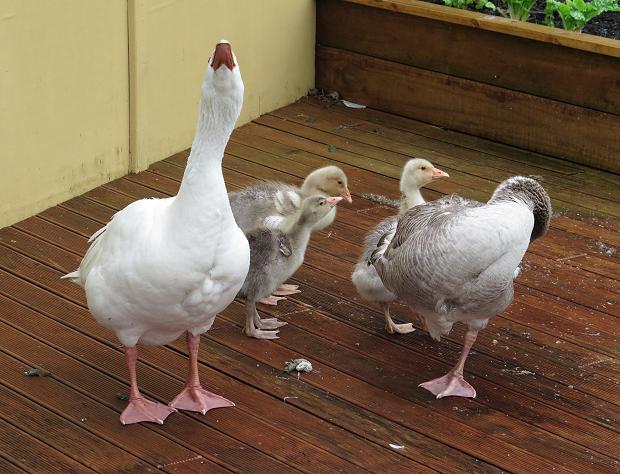 It rained again but we're glad of it. 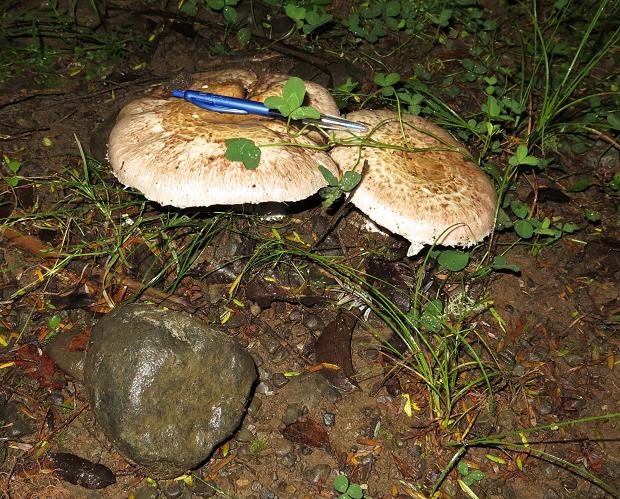 With an overnight temperature of 17°C there are suddenly mushrooms.  Fungi like these grew here last year but I am not sure if they're the edible field mushroom or not.  Impressive fast fruiting though, whatever species they are. 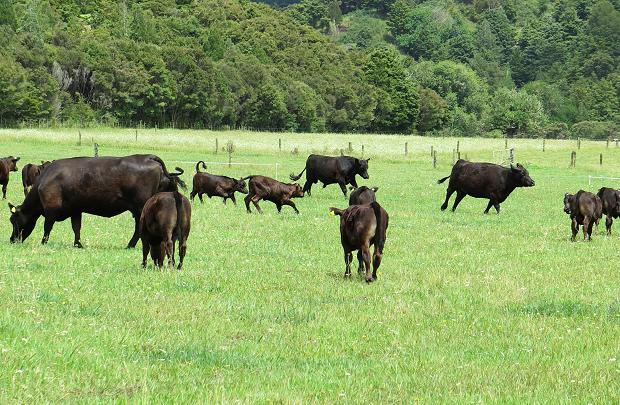 Some bulls, particularly when they're young, herd their cows as they come on heat, keeping them together and away from any perceived competition.  Eva's son 144 is a very enthusiastic herder.  I worry that he'll wear himself out!

The social hierarchy in this situation always surprises me: that a young whipper-snapper of a bull could wield such power over even the mature cows seems extraordinary. 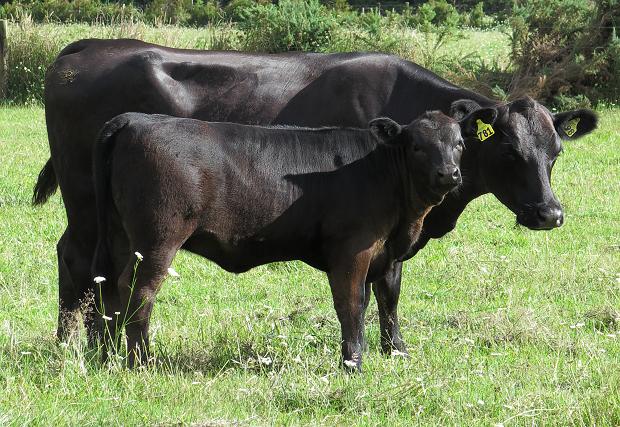 Gem 698 is thinning down a bit as she raises a stunning daughter.  Both she and her twin, Meg, were on heat two days ago, which is the first time they've had synchronised matings with their bull.

In their first year Gem and Meg were three days apart, the next, 39 days with Meg pregnant first and this last season they swapped around and Gem got in calf 23 days before Meg.  I'm glad they've sorted themselves out.  Identical twins should get pregnant on the same day! 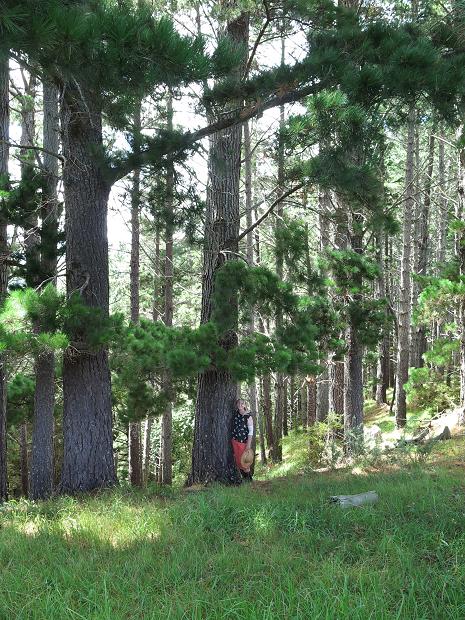 Joanne and Oscar, who are Stephan's sister-in-law and my favourite school Chemistry teacher (sixth form chemistry was a joyful time of discovery in an otherwise fraught adolescence) came out for a long walk around the farm.  Oscar has a keen interest in timbers and is about to take delivery of a portable saw-mill so we visited the large Pines, some of which he might use as practice material.

Then down the hill through different reserve areas, exploring trees and the streams.  It's lovely to share such walks.

After our visitors left Stephan went off on the tractor, out to the furthest corner of the Big Back North above the swamp, to spray Ragwort and any Gorse he could find.  As I worked in the aviary, cleaning dishes and feeding everyone, the sky darkened considerably and the heavens suddenly opened.  I expected to see Stephan driving back but he didn't appear.  Eventually I went off on the bike to go and find him, in case he'd had one of his "events" on a slippery track with the tractor.

Walking in my soaking clothes and still pouring rain up the hill in the Big Back, I could hear the tractor somewhere and then spotted some orange movement.  Stephan had sheltered under some trees, waiting for the rain to pass, but it didn't.  He came up a slope and parked the tractor under a bit of tree shelter because there was no way he'd be able to safely drive down the clay track to the bottom of the paddock.

After drying himself, Stephan went out to Mangatoetoe to collect some ripe plums.  He said everything was wet until he reached the Limeworks at Fairburn and beyond that point there had been no rain.  On the rain radar, there was a little blue blob above our place for the two hours during which the rain fell. 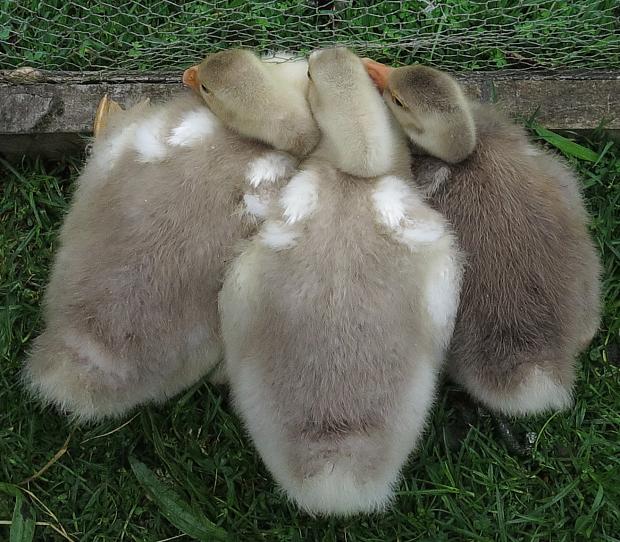 This is the last geese picture.

When we got up this morning we discovered the geese in the garden again and they'd flattened much of the beautiful stand of sweetcorn that Stephan was growing in one of the pentagon patches.  That was the last straw!

I quickly caught all three goslings, thinking at first that I'd continue rearing them without their parents, whom we'd then catch and dispatch.  But once they were sitting together in the little cage, I noticed all those white feathers: the chicks I had thought dark enough to be female were actually male.  My one experience with a gander has been sufficient and they're not birds one can really rehome - you just don't need that many males.  The little female chick nearly died a few weeks ago and since then I've wondered about the increasing lump on her back and her slow growth compared with her siblings.  With a deformity of that magnitude, I didn't think her life would be long and trouble-free, so all three went with Stephan to a quick and humane end.

Then we herded their parents in to the cow shed, shut them in the calf pen and caught them too.

Over the next hour or two Stephan plucked and I quartered and skinned the large back legs and the breast meat from the adults and the legs of the goslings and that all went in to the fridge (and later the freezer) while the remainder was salted down for use as bait for traps to catch stoats.

The little female chick had a marked scoliosis of her spine, which explained the large lump on her right side.

I found it all very sad, despite my determination to get rid of the birds.  It was fun bringing the eggs home, hatching the chicks and then some parts of having them around were lovely.  But I never appreciated their aggression, nor the stinking mess they made in such profusion. 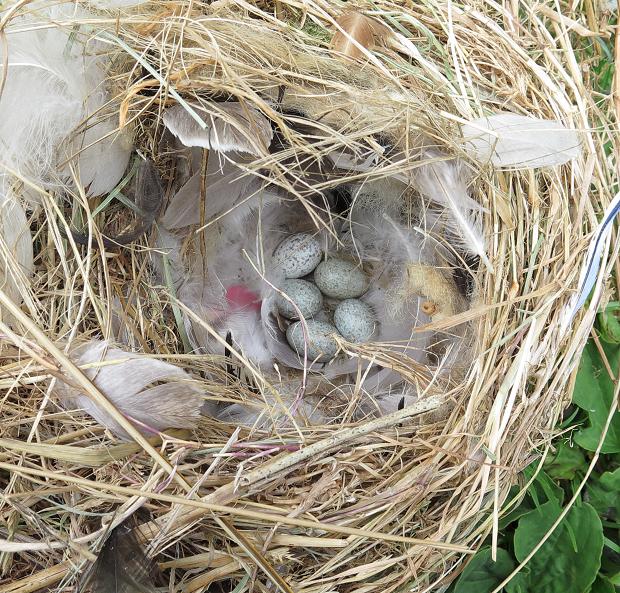 Continuing with my determination to remove annoyances I pulled down a sparrow nest from a gap in the framing of the back porch, eggs and all.  There are always sparrows in the porch where the chook food is kept and we could do without a whole family growing up with the knowledge that that's the best source of food! 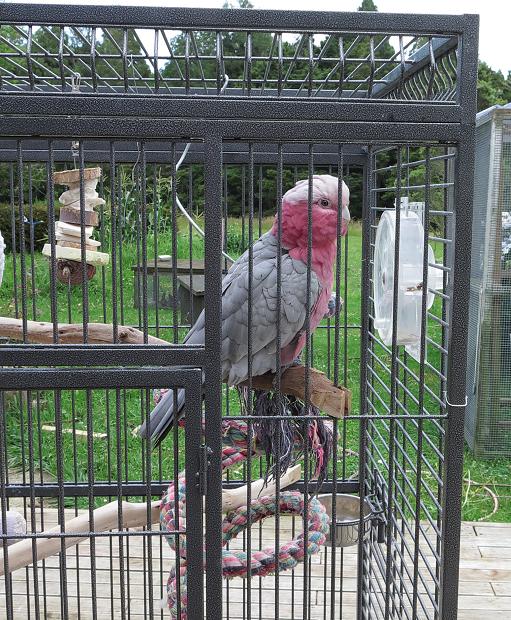 Floss looked on with concern, as well she might! 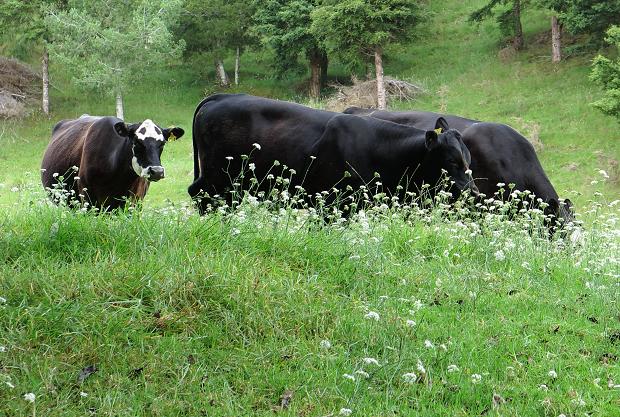 An amusing gathering: 714 seemed to be watching the bull with her daughter, as if ensuring that he treated her well.
(Of course not, that would be an anthropomorphic reading of the situation.  She may have been deliberately grazing near her daughter, or it could have been a coincidence in that moment.)

We brought the second cow and calf mob in for their booster vaccinations - 805, the last calf born, had her sensitiser vaccine (the first injection) since she was too young four weeks ago when the others had theirs.  We'll have to give her a booster in four to six weeks.  We must not forget!

There are a lot of juvenile pheasants around at the moment.  I've seen them fly up off the tracks around the farm and also noticed them out on the roadsides when going to town.

Imagen showed a few vague signs of being on heat today so I politely asked 87 if he'd like to spend the day with her, if he had nothing else on.  He was happy to oblige.

I have sold a couple of lots of tiny, pink, bald budgie chicks in the last couple of weeks, to a woman who hand-rears them.  She first took a couple of Loofah's latest clutch, since Loofah's partner had suddenly died and she was left alone with her many eggs.  This time she took three chicks from the nest I pictured last week.

While Lesley was here, we both noticed my favourite youngster, a gorgeous green and yellow bird which Emma had named Precious, sitting hunched in a corner.  I'd been watching him, wondering what was up for a couple of days and now he was jittery and itchy and weird and when we picked him up, it was obvious how thin he was.  I put him in a cage and took him inside for the night, presuming he'd die.

Little sick Precious was, to my surprise, still alive at 2am when I got up in an insomniac state.  I picked some fresh Silver Beet (green leafy vegetable) and he ate that quite enthusiastically, so I fed him a little more every hour or so.  He spent the next couple of nights in the same accommodation, the small carrying box I'd made for Loofah when I brought her home, nicely lined with soft dry grass.  He shivered and stamped his feet continually and I could see that he'd not get much rest if he couldn't rest most of his body on a soft surface.

I weighed him and found he was only 34g, much lighter than most of my other birds.  But he continued to eat well, flew around, seemed a little brighter and did eventually recover.

I think that what looked very much like some weird neurological condition causing all the twitching was quite possibly the result of starvation.  I can only surmise that there was a social issue in the aviary which I couldn't see, where perhaps one or more older birds kept him away from the food for a long period.  They're all so fluttery that it would be difficult to tell that one bird was always chased off. 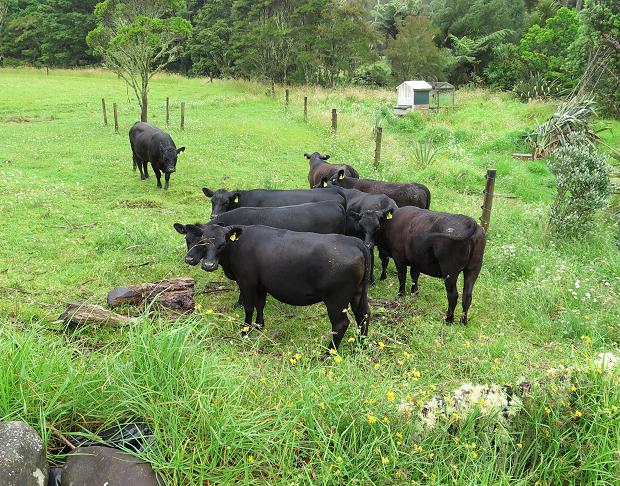 Bull 134 keeps herding the seven heifers into corners and keeping them there.  We had to put an electric tape across the corner near the aviary because he was holding them so tightly I feared someone might get shoved and knock the building.

This behaviour seems to occur when one of the animals is coming on heat, but it's hard to tell which of them it could be at this stage.  Despite being held captive, they all seemed quite relaxed, chewing their cud.

During the afternoon it rained really heavily again (52mm this time) and he still had them cornered, so we moved them down to the driveway where at least they could stand under some trees in the most likely cornering place.