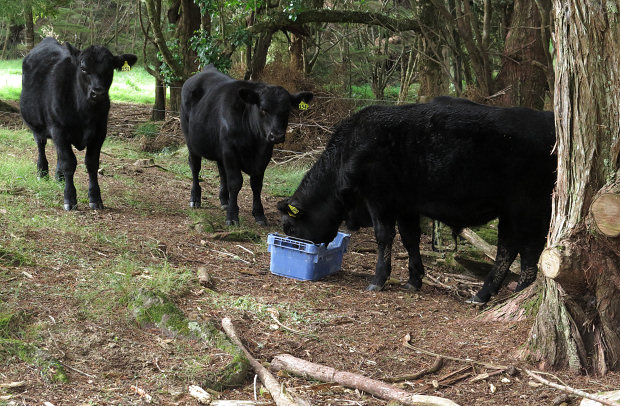 I introduced steer 783 to some molasses today.  Zeb is already very fond of it, having regularly gone in to the cowshed once Zella had exited to lick up anything she'd left behind, before he'd even gone to her for breakfast.

The two animals are to go to their new home on a large trailer, so I'm hoping that getting them hooked on molasses will make it easy to entice them onto that transport when the time comes. 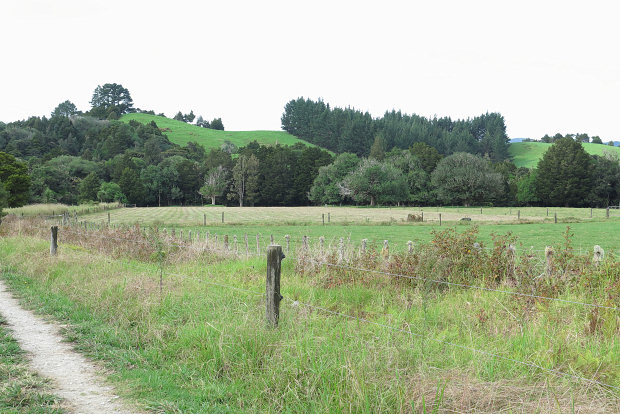 Stephan mowed Flat 2 yesterday, a heavy job, because in many places the mat of Kikuyu was quite thick.  There are thick rows of cut grass there now but hopefully that won't interfere too much with the growth of the seed I've sown.

We bought a lightning conductor for the new electric fence energizer and Stephan installed it today, necessitating a bit of reorganisation of the feed wires out from the shed.  While insurance might well cover a replacement if this energizer were blown off the wall by a lightning strike, one should take all practicable steps to reduce such a risk.

I spent the afternoon sowing seed in the House Paddock, then the rest of the evening hunting for my dropped MP3 player!  As I'd been carrying the GPS to show where I'd sown, knew when I had clipped the device to my apron and when I'd noticed it missing, I was able to restrict the search area; but I still walked up and down for two hours without success.
After dark we both went out with torches for another search, hoping its shiny surface might be more visible in the grass than its black shape had been during the day.  Stephan eventually said, "right, I'm sick of this, I'm going home" and promptly handed me the player. 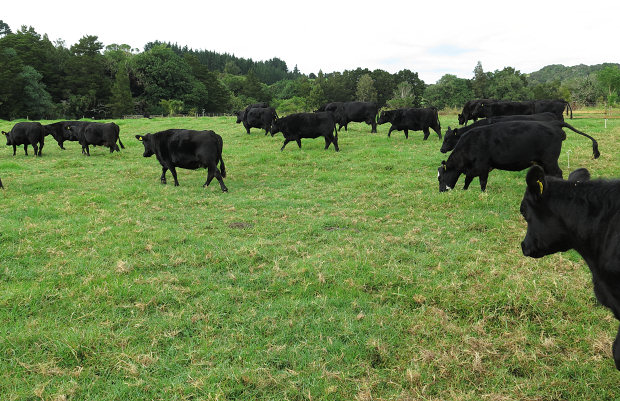 This morning I let the cows have the rest of the House Paddock. 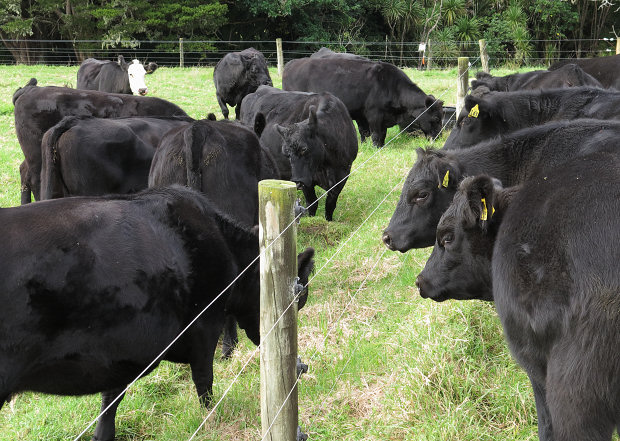 I brought the R2 heifers in to the yards for a copper shot.  There was rather a lot of posturing and bellowing between the two groups as the heifers came down the House lane. 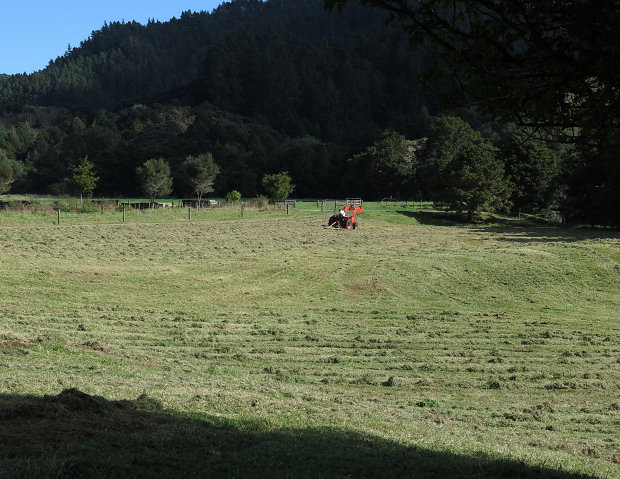 Yesterday afternoon I sowed the top end of Flat 1 and moved the cows there to graze it down.  This morning Stephan mowed the House paddock, another fairly heavy job since it hasn't been hard grazed or mown for some time.

It is so good to have these tools.  For so many years I had to rely on pushing the cows hard to get the pasture into good shape in the autumn but this allows me to look after the cows better all ways round: better pastures without so much pressure on the animals to make it so.

When the cows had finished in Flat 1, I sent them off up the lanes and left them to make their own way to the Frog, cleaning up various corners on the way.  When I later went to check on them and shut the gates, I found R1 bull 151 in with them, paying a lot of interested attention to Emergency, who'd come on heat again.  I wondered if the little bull would have tried to suckle his mother (Ellie 119) while he had the chance but she had only mud on her teats; his priorities were sexual, not nutritional.

Cattle are funny when they know they're in the wrong place and as a result are sometimes surprisingly easy to draft out of a mob to which they don't belong.  I got him back up the lane to where I could ensure he couldn't make another escape back to the cows.  I'm not sure how he got to them, since the fences are theoretically now rather hotter than before.

Late this evening I received an email deferring the steers' departure until Wednesday. 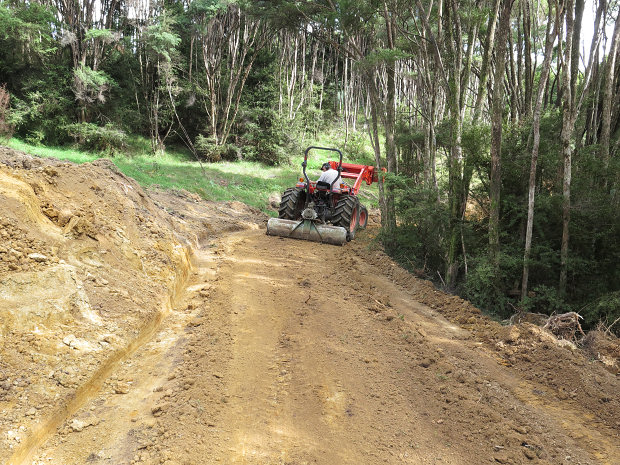 I followed Stephan out along Route 356 this morning, for a planning consultation at the far end. 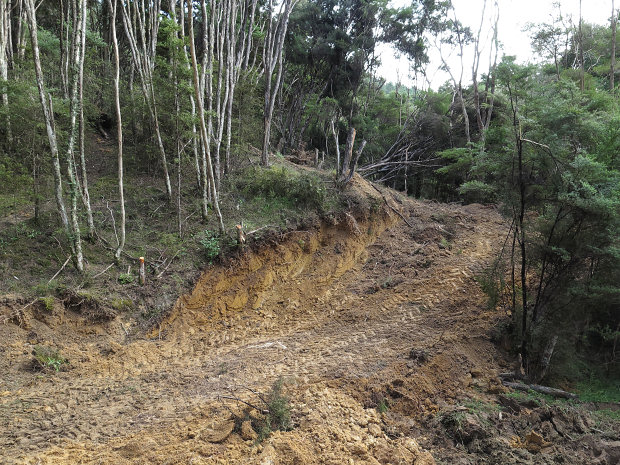 He has begun forming a track up from the little gully in which 356 was stuck, to the Middle Back fenceline.  I should have taken a picture from a bit further back, to provide more context. 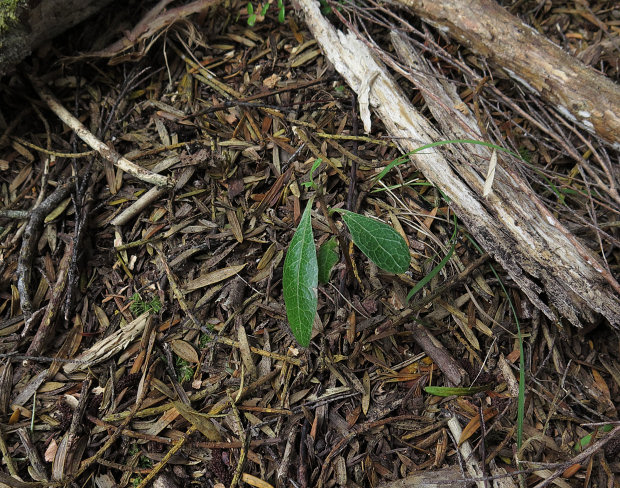 At the top of that bit of new track I spotted this tiny plant, luckily undamaged by all the activity.  I think it is Akeake. 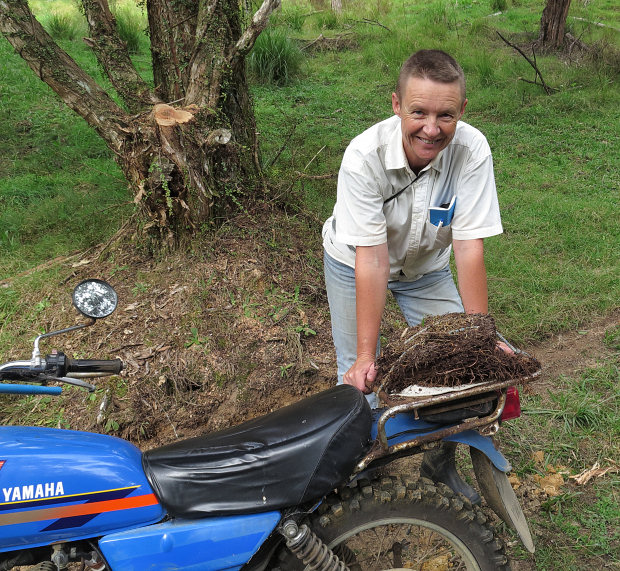 Stephan dug it out and I took it home on the back of the bike, so it can grow safely somewhere else.

This afternoon the man who was to buy the two steers, with whom I'd spent some time negotiating a fair deal, emailed to say he doesn't want them now.  I am, to say the very least, extremely annoyed.  If he had told me this time last week, they would probably have been able to go off with the others; as it is, selling two calves on their own is impracticable.  They'll just have to stay here and I'll have to find room for them - potentially an extra cow has to go to the works to make room to feed them through the winter.  I really am very annoyed; I could have done without all the extra messing around.  In future I will do as it occurred to me to do this time but did not and extract a deposit from anyone with whom I have not previously dealt, if they wish to purchase animals from me.  It was not as if I had nowhere for them to go, more that a friend asked if I would sell to someone who had asked her if she knew of a source of good calves.  There has been some swearing! 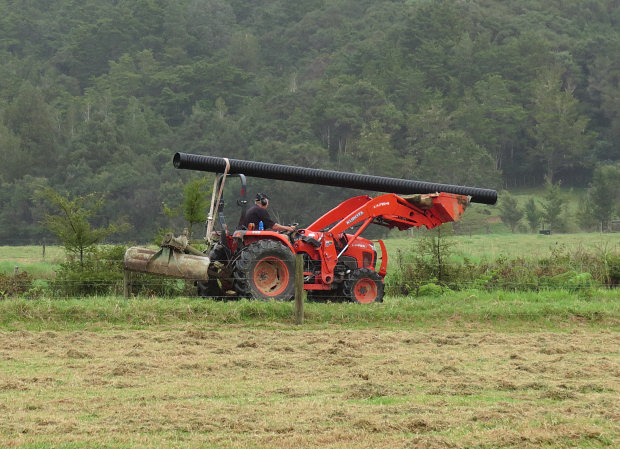 Stephan, with a culvert pipe purchased yesterday (luckily they happen to be on special this month), on his way out to install it in the 356 gully. 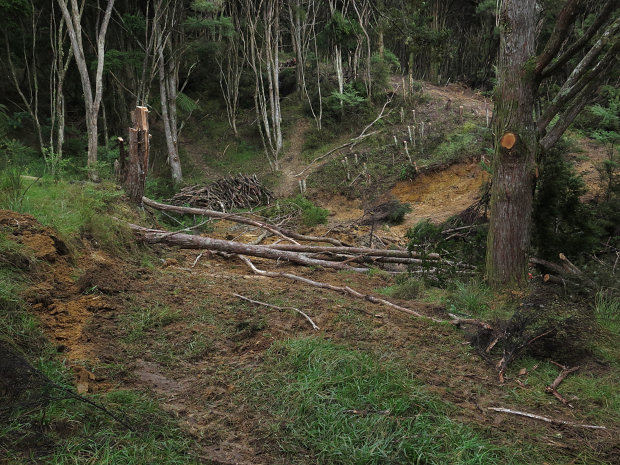 When I went out to see how he was getting on, the pipe was in and Stephan was dropping firewood all over the place again. 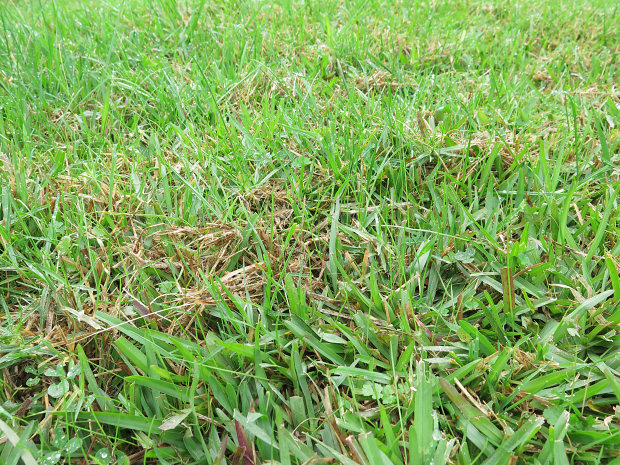 I checked the grass in Mushroom 1, sown 13 days ago, now about 10cm/4 inches tall - the tiny, thin little blades are the new plants amongst the existing sward. 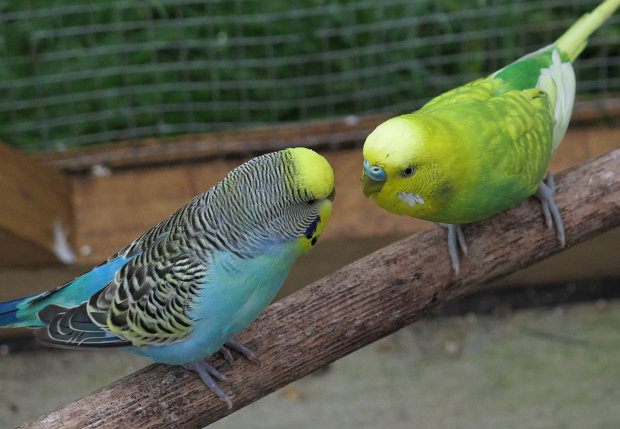 The trouble-makers of the aviary.  Precious is the green and yellow bird but the other one isn't named.  I suppose he could be.

Both birds regularly land on my head and shoulders and preen anything they can get hold of, which is sometimes entertaining and sometimes painfully annoying. 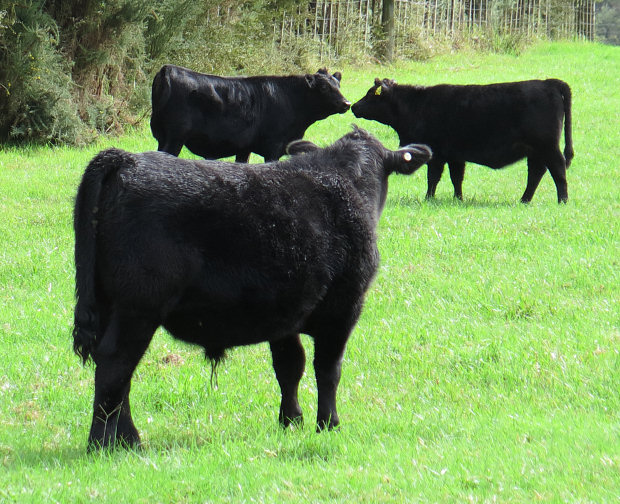 Since the two steers are now staying, I put them in with the heifers again and watched with some interest to see what would happen when Zeb and 155 found each other.  They were the only two to meet like this, the others only looking and circling each other.  One day they'll have to be parted again but they can continue to live together for some time again yet.

Of course lots of the other calves have lived together for the whole of their lives too, but in larger groups.  Zeb and 155 were on their own in the house-cow "mob".  I recall one morning a few weeks ago when an animal calling outside the house drew me to go and see what was wrong.  I presumed one of the two calves had lost track of its mother but that was not the problem: 155 was in the paddock and Zeb was not and so they were calling each other.

I felt very sad and mean separating them last week. 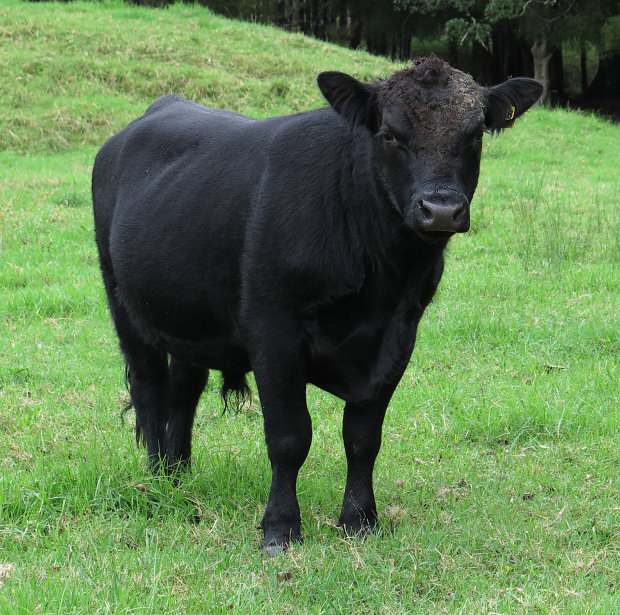 Bull 137 was my early favourite amongst the yearlings but this bull, 138, keeps catching my eye now.  He has a certain presence and structurally he's looking good to my eye.  He is one of the bulls sired by Pono of Kawatiri, from five straws given to me by Pono's breeder, Mr David Bone.

With the fabulous new electric fence energizer installed and pumping out more power than has been in the fences for years, Stephan had arranged with the local Gallagher representative to come and help him work out a few glitches and some faults he couldn't track down.  Russell spent a couple of hours checking, explaining and the two of them went for a walk so Russell could see how most of the system was set up.  His comments were complimentary and some of the issues will resolve themselves as more power burns through the grass which is causing power leakage to the ground where the grass has grown up over the bottom wires. 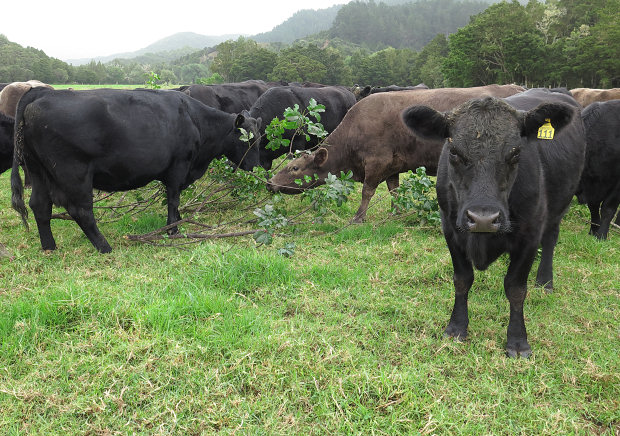 The big Puriri tree by our house has been growing new branches where it was formerly pruned (they always respond really vigorously to pruning), darkening the area outside the back door and allowing Floss to get onto the house roof when she has been up in the tree.  Stephan used the pole-mounted chainsaw to prune it back again and then we piled all the branches onto the ute and took them up the lane to the cows.

They don't all love Puriri, but there are only a handful who don't come running when they see some on offer. 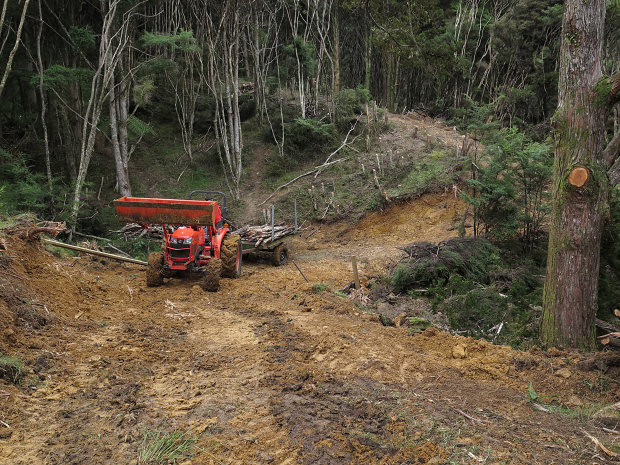 As he forms the track up to the Middle Back fence line, Stephan is bringing soil down to cover the culvert in this gully.  These changes make such a difference to how everything works.  It'll all get pretty messy again during the winter but there will still be less soil going in to the waterways because the cattle won't be walking directly through tributary areas like this one. 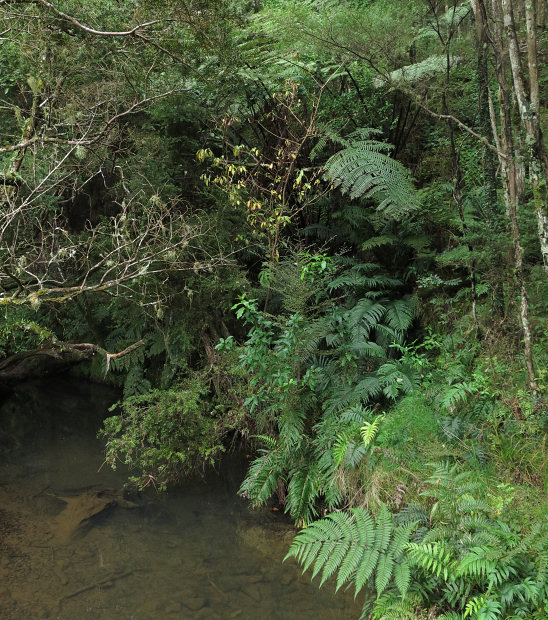 When we were getting one of the straying calves out of this reserve area the other week, I noticed these yellowing leaves.  The only native tree which is mostly deciduous is the Tree Fuchsia, which this one proved to be. 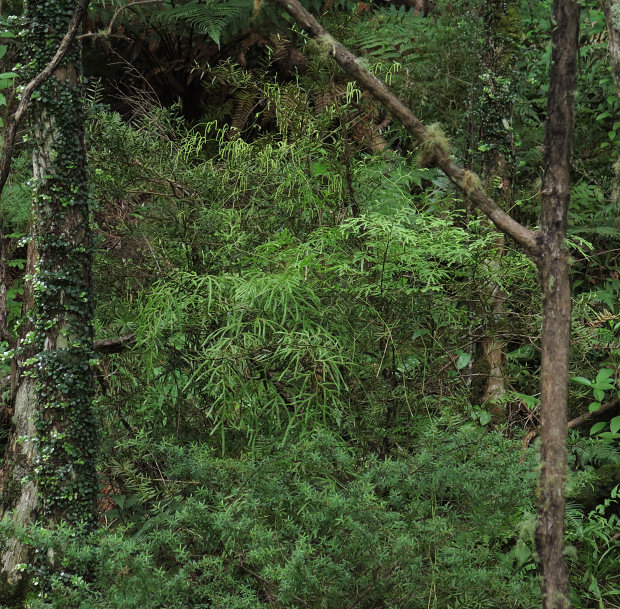 This fern, Lycopodium volubile, caught my eye across the other side of the stream, with its pretty spore-producing cones above the leaves. 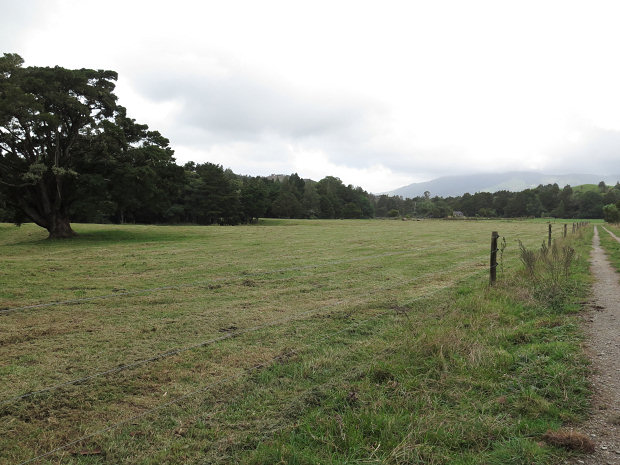 Stephan mowed the Windmill this morning.  I will watch with interest as it grows because it has four different areas of pasture.

At this end and down to the left, there's an area we've paid particular attention to when applying fertilizer and lime, because it was obviously not as productive as the rest of the paddock.  On the higher ground here is primarily Kikuyu and whatever rye grass has spread itself around or continues from earlier years.  In the middle section is an area I sowed last year, where I am hoping the grass will grow well now the plants are well established.  At the bottom is the area I've just sowed with rye and clover seed and that has to be shut up for the next eight weeks. 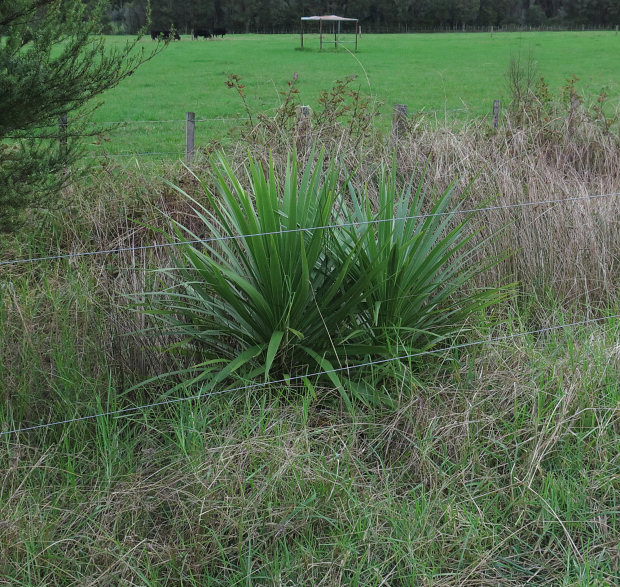 A small Cabbage Tree which grew in the ditch alongside the Windmill lane, fell down some time ago and these two plants have emerged where the head of the tree landed.

I didn't know until recent observation, that they're quite easy to grow from the small bits which sprout out from their trunks and branches and that they'll sprout again in this way when the main part of a tree falls down for some reason.  In my little plantation on the riverbank near the house, a tree fell and has sprouted both at the base of the trunk and where the head of the tree fell.