The week beginning the 1st of July 2017.
Saturday the 1st 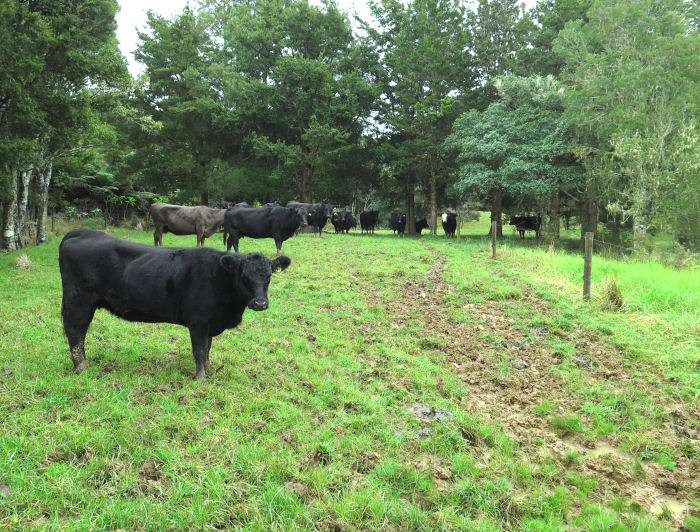 I think the cows just stand around waiting for me to turn up.

I moved them from here, the Big Back South, along the short lane to the Small Hill, except as they moved I noticed Eva looking a bit slow, possibly with a slightly sore back left foot.  I sent 18 cows into the new paddock and drafted Eva and a couple of friends into the adjacent Bush Flat, so she wouldn't be up on the hill.  Her limp is barely detectable but she's not completely comfortable. 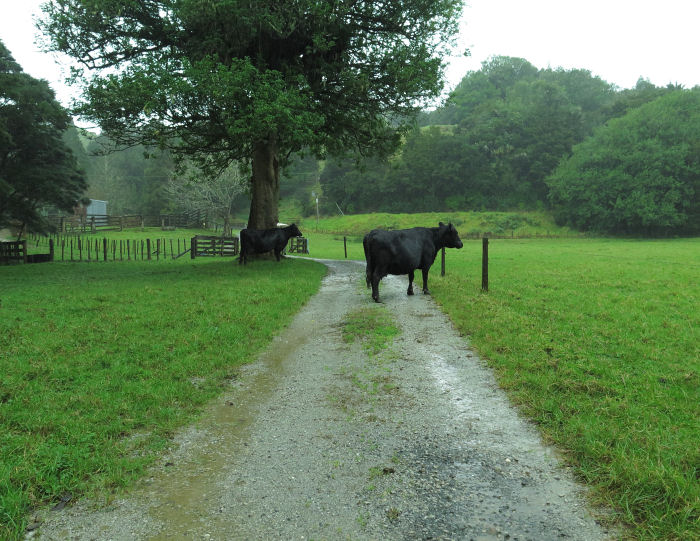 There being another heavy rain warning in force, we walked out to bring Zella and Demelza out of the Pig paddock, in case of flooding.

I had earlier opened the gate but they decided to graze the driveway instead of coming over the bridge and out to the nice Windmill paddock.

The white thing is Stephan's umbrella, as he walked out to the mailbox to see if the paper had arrived. 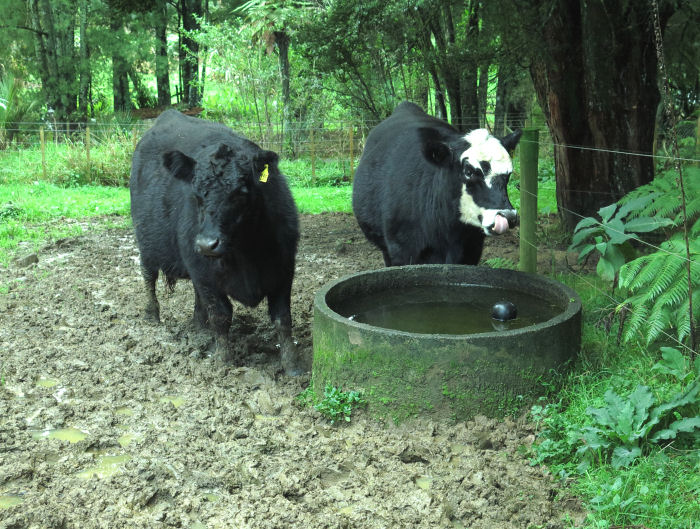 We walked over to check the pregnant heifer mob, which I hadn't seen for a few days in all the rain.  They were all sitting or grazing near the bottom of the hill, so it was a quick and pleasant job and we got home again just before a very heavy downpour. 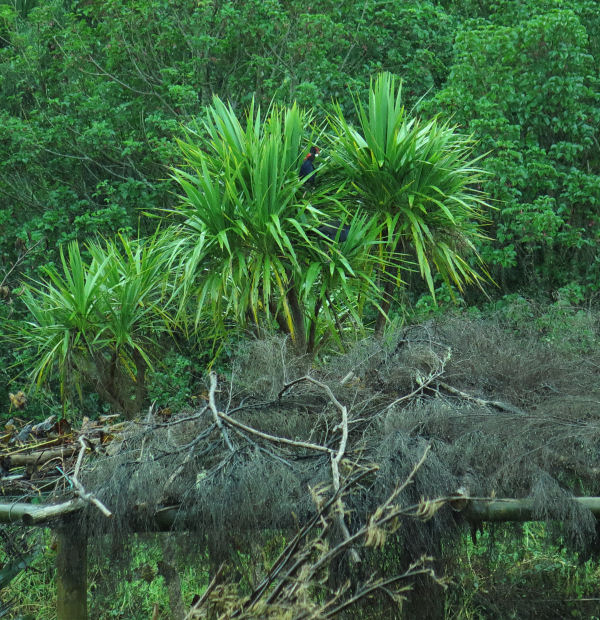 There were some very heavy, reasonably short, downpours before dawn, which had me up and checking things earlier than I really wanted.

Later, three Pukeko from the pond up in one of the Cabbage trees, made me wonder if they knew something about the impending arrival of a huge flood.  They clambered about with their crazily long legs and toes but I couldn't see why they might have been there.  Pukeko do fly into trees regularly but I've not seen them in this one before.

Yesterday I'd checked the young cattle, found only nine of the thirteen but shifted those present from the Swamp East to the Frog paddock, leaving the gate open for the others.  Stephan had checked later in the day and the missing four still hadn't turned up.  They were all here this morning.

Just before I moved them yesterday, I was standing beside the very tall Puriri tree in the corner of the paddock and a sudden noise made us all jump: one of those enormous epiphytic perching lily plants was falling from the higher branches, down through the lower ones and then crashed to the ground.  The cattle all bolted.  I haven't ever been in the vicinity of one falling before.  They come down very quickly and there would be little chance to think about which way to run if you happened to be right underneath at just the wrong moment. 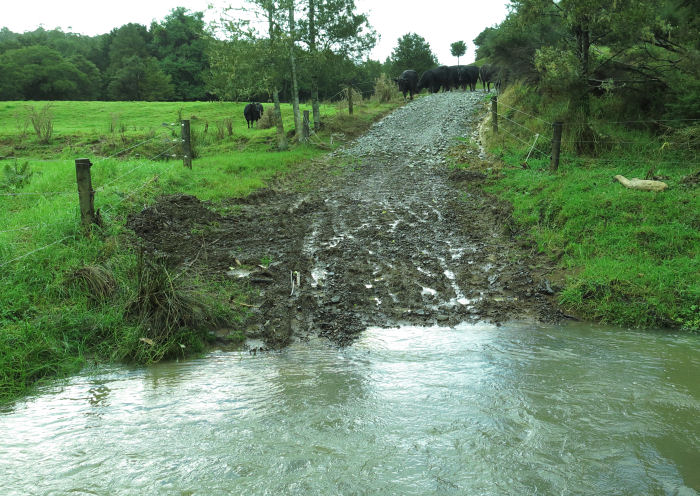 The streams are all still running high, this one to the Bush Flat too high for my short boots.  Stephan went across with a new live-capture trap for further along the lane and opened the gate for the cows, while I stood here and counted them through the gate to join Eva and the other two in the Bush Flat. 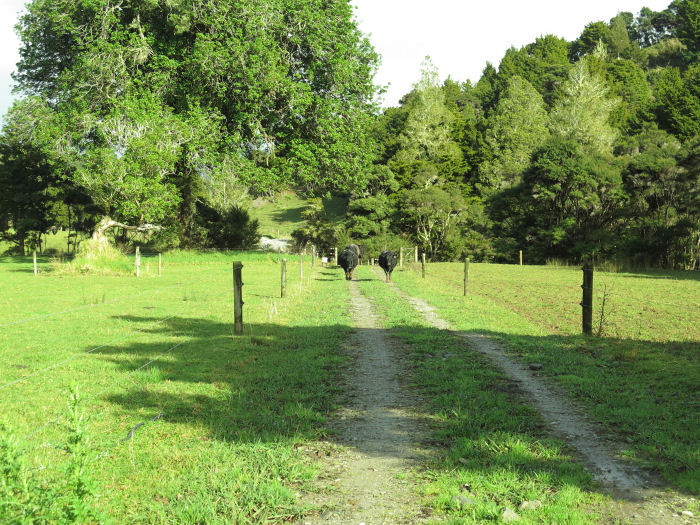 A completely different sort of day today, although there was still the occasional light shower.

The cows now having had a few days rest since the 7in 1 vaccinations, I wanted to give them all a copper injection, their second for this year.

I went and called the cows and left them to wander in their own time down to the front. 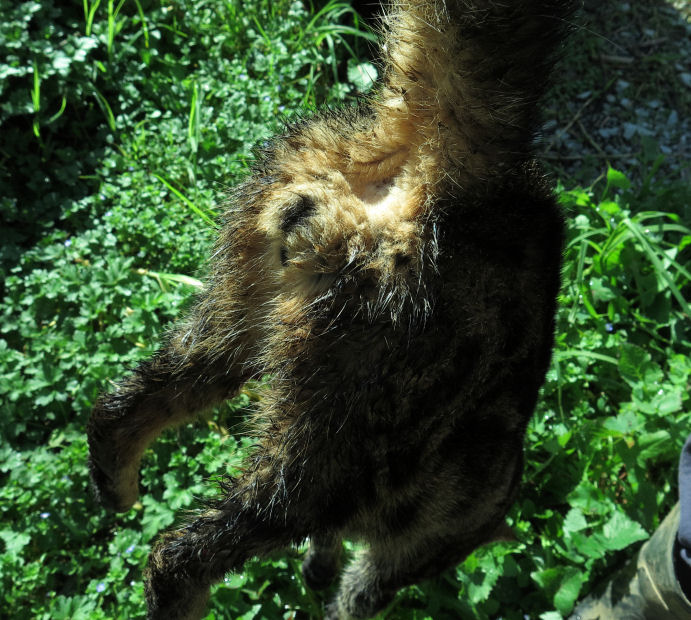 Jane phoned and said there was a quiet cat in her trap but when Stephan moved the box, the cat demonstrated that it was by no means anyone's tame pet!  This view of its substantial testes proves that point.

I don't think we've ever seen this cat, our eighth for the year.  There must be so many of them around that we never see.  Still, there are a few less now. 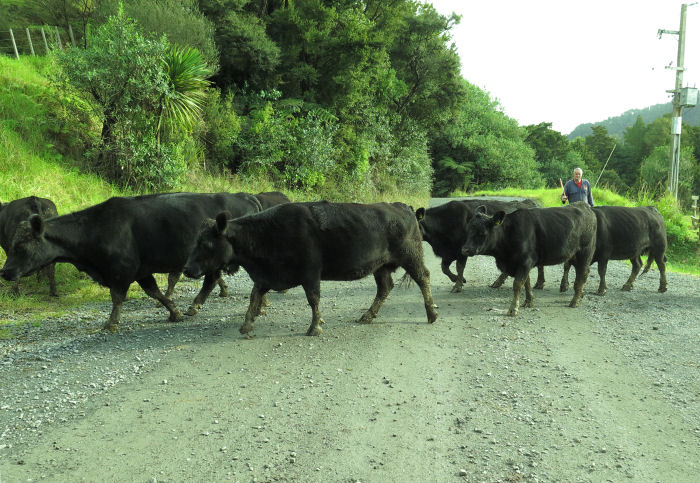 After some rain and some lunch, we started on the copper.  It's nice having Stephan around the place all the time these days, able to help me in the yards when I'm working.  It's much easier and quicker working the cattle with two of us.

Earlier we'd brought the pregnant heifer mob across the road and done them first, then did the cows, who'd spent a couple of hours in the Pig paddock and then they went across the road to the other part of the hillside. 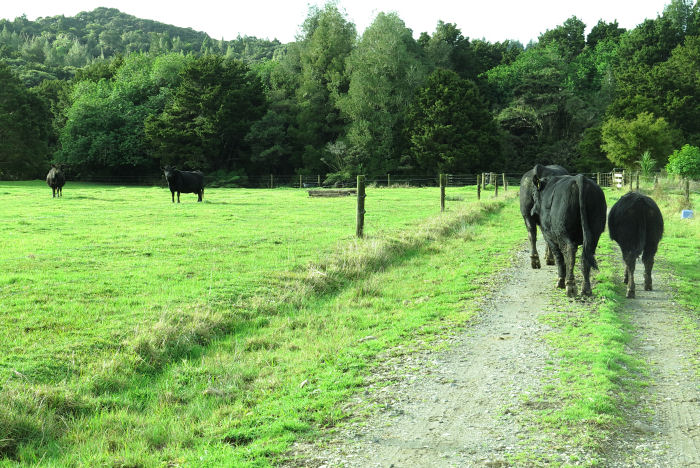 Zella and Demelza were next, then I fetched the bulls.

The bulls are always 'fun' to do.  They move so fast and are never quite as quiet as most of the cows.

Fortunately, if handled on his own so he can't bulldoze anyone else out of the way, Mr Big 87 is pretty easy to manage.  After his injection I backed him out of the race, because he's just a bit big to comfortably go out the front and turn out of the headbail gate - he manages alright but the yards flex more than I like to see.

Making him back out is just a case of putting my hand into the race in front of him, he sniffs a little then blows snot at it and backs quietly away. 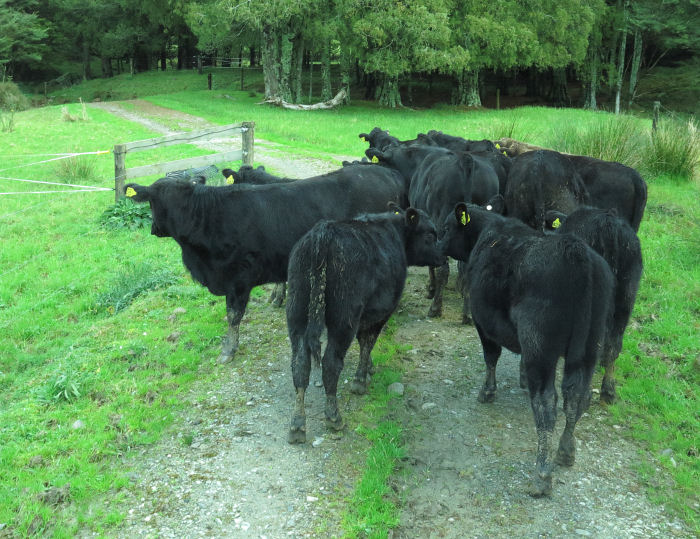 Following the young mob along the lane from the Frog paddock, I couldn't work out why they'd all stopped.  They were all staring at a dark and dangerously coiled monster lying in wait beside the track and none of them would go past it without significant coaxing.

Stephan had brought a new coil of alkathene out here in case he needed it for the trough installation and hadn't taken it home again yet.  You can never tell what cattle are going to be frightened by.  I wonder what it is about a coil of pipe that causes them such consternation?

Between house-tidying in preparation for family visitors in the weekend, I got back to a job I left this time last year: making some more of the early website pages mobile-friendly.  There are many, many pages to fix and they all have to be re-coded individually because of the way in which I created them.  Fortunately I can do a lot of the repetitive tidy-up work by running the code through a Word macro, something I'd not formerly known how to use - still don't really, but it works to find and replace a lot of repeated terms.  It's frustrating work on one hand but as I'm part-geek, I also rather enjoy it.

I keep being distracted by reading things I had completely forgotten.

I went to a four-hour Red Meat Profit Partnership-funded course in town, to teach farmers how to use Microsoft Excel.  I've continued to use the old Works Spreadsheet programme for years and had never realised how similar it is to its successor.  What I really wanted to learn how to do was to use what I think are referred to as 3-D spreadsheets, lots of worksheets all sitting behind a front one which uses figures from the others to make its larger calculations.  That wasn't even hinted at today.  This might not be the course for me, but I've committed so I'll go next week and see what else there is.

Today is the fortieth anniversary of the seventh of the seventh of seventy-seven (7/7/77), the date upon which the Mathew family bought the farm.  We commemorated that in a small way today and continued to ready ourselves for the family gathering tomorrow.  The weather and forecasts are terrible: we could yet be alone in a flood, or have everyone camping on the floor because they can't get back out!