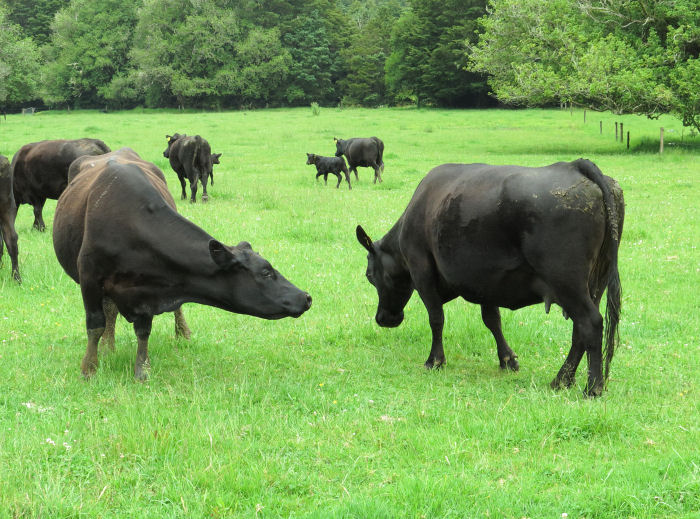 Needing to move the mobs of eight and four pairs, I combined them this afternoon, with lots of posturing by the dominant cows.  Here 725 on the right is demonstrating her superiority and Jet 777 is reaching out submissively to her.

725 then sidled over closer to Jet and started sniffing around her tail. 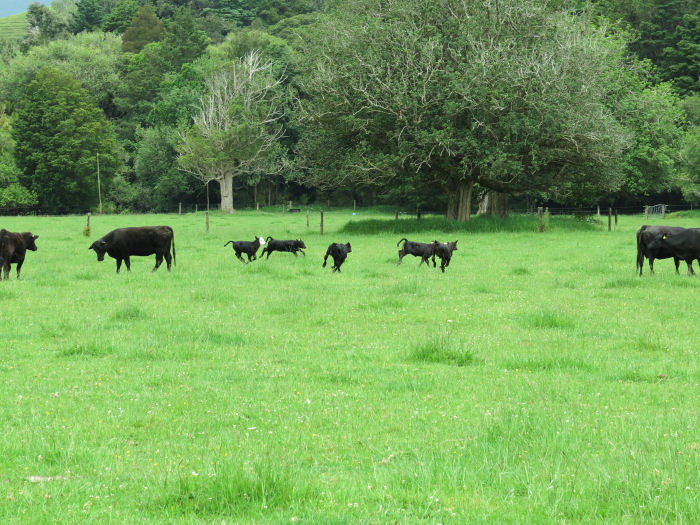 The calves, finding themselves in a larger group and a new paddock, took off for repeated gallops.  Sometimes the calves will fight each other but usually they just run.

The cows on either side of the photo are sorting out who's who.  The animal on the extreme left is Genie 150, who has turned out to be a very submissive individual and is completely unresponsive to the posturing of whoever that cow is challenging her.

Usually when I move cows, I'm off to do something else immediately or am so concerned about the fighting going on that I haven't carefully watched what happens when a cow simply ignores the approaches of another.  I will try and pay more attention to these interactions. 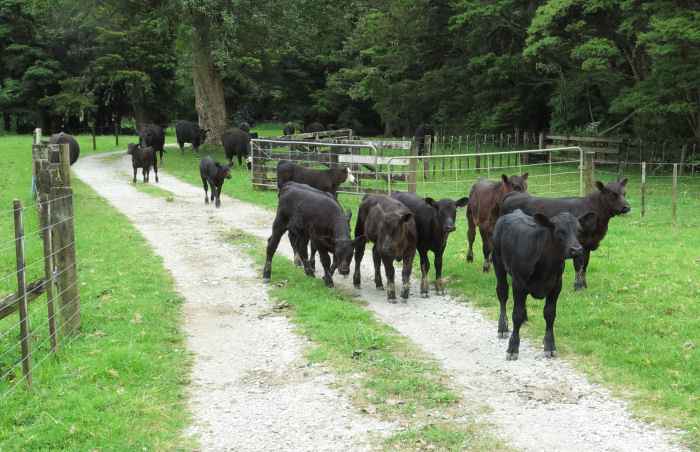 The next lot of calves coming in to the yards for weighing and tagging.  What great calves, all coming in ahead of their mothers. 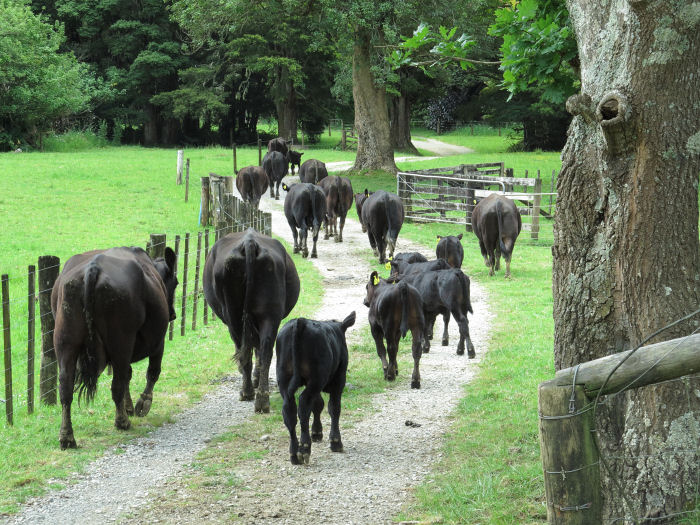 They all got the numbers I'd planned for them, taking particular care to ensure we'd matched the pedigree bull calves with their mothers, since when we castrate (or not), we want to be sure they're who we think they are.

To aid my memory of who's who out in the paddock, I try to tag a calf with a number that reminds me who her (in particular, since the heifers might be here for a long time) mother is.  723's daughter is 853, for example.  Ellie 119's calves have all been 1X1, the first two by coincidence and since then I've continued the pattern.  This year's lovely heifer is 171. 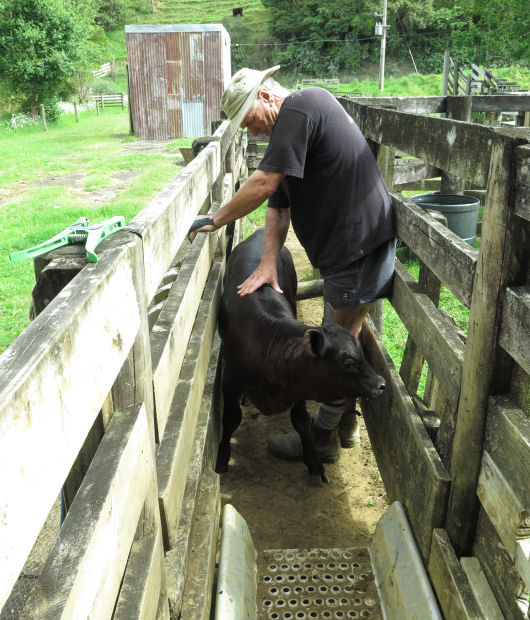 Zoom is the oldest and biggest calf, now 47 days old she weighs just over 120kg.  She must have been growing at about 1.7kg/day, which is hardly surprising since she was getting as much of her mother's milk as she could drink until a week ago.

I thought I'd noted which night Zoom and Spot were first separated from their mothers but can't find it.  I conclude that I took a picture of them on the 20th, the day from which all photographic record has mysteriously disappeared.  We decided to keep the calves together at night, even though Spot doesn't need to be separated from Demelza since we're not milking her.  It won't do them any harm.

The impetus for separation was seeing Zoom with scours, probably brought on by drinking far too much milk!  Now we get most of what Zella produces overnight, milked early every morning and Zoom takes what she needs throughout the day. 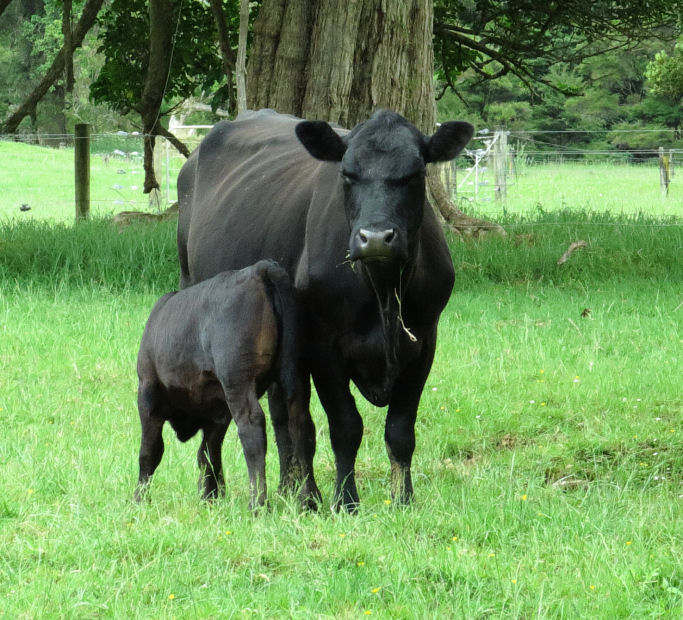 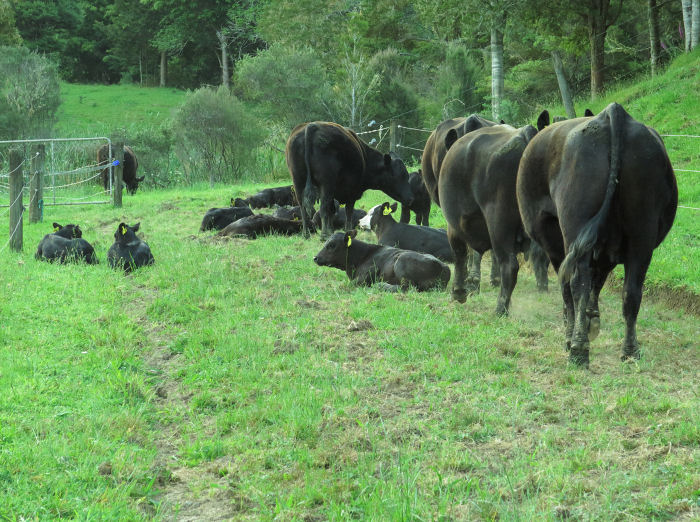 I moved this lot from the PW, around the tracks to the Big Back North (they're the group tagged last week) and when I went along the lane to close the gate behind them, found all the calves had sat down at the end of the lane, while most of the cows had gone on into the paddock. 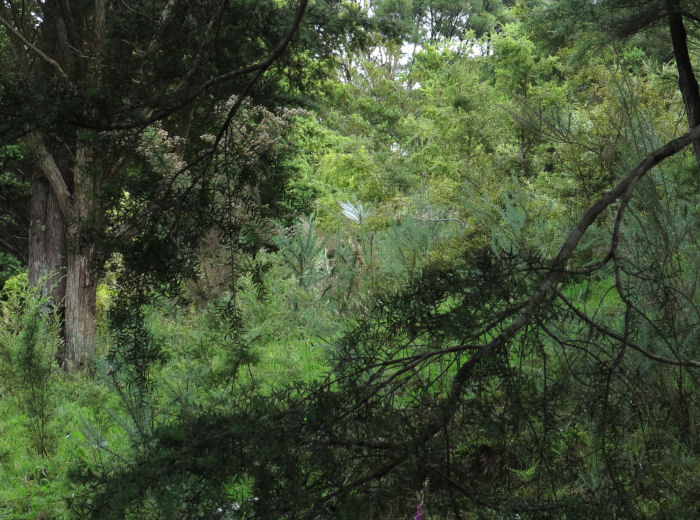 In the PW where they'd come from, one tiny patch of Gorse Spider Mite.  It's no surprise that we haven't seen much around yet, after such a long, wet winter.

Overnight I gave some thought to the implications of Stephan being out of action for an unknown number of weeks after his knee surgery tomorrow and decided we'd better spend today getting some work done.  While he went out to spray ragwort in the PW, I shot in to town to pick up some 7in1 vaccine for the calves and some new rubber castration rings. 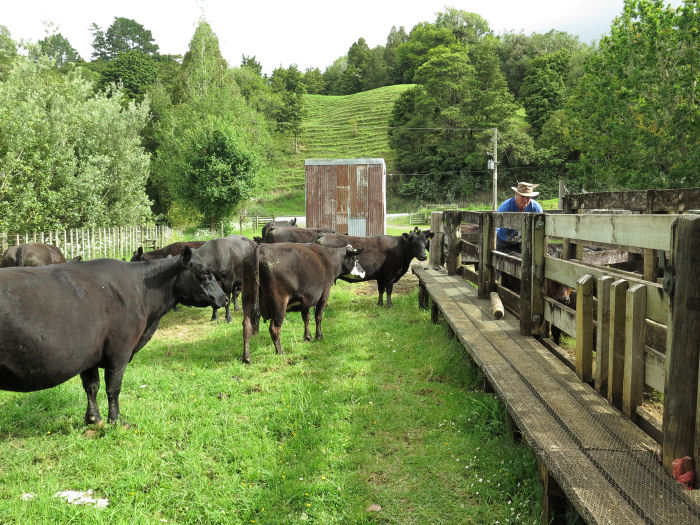 Wearing the cricket pads I bought years ago for working with calves in the race, Stephan castrated all the non-pedigree bull calves and vaccinated all but the four too-young calves.  I'd consulted with the vet about whether we could castrate without vaccination and his advice was that it's reasonably safe, that calves don't generally contract any of the clostridial diseases we vaccinate them for, as a result of ringing the little bulls.

It's better for the calves, pain-wise, to do it early.  We certainly couldn't afford to wait more than a couple of weeks for Stephan to do it after his surgery.  I have never castrated a calf and with a still-dodgy lower back, was not about to find out whether or not I could do it on my own.

Stephan's sister Elizabeth lent us her nice car before they went away on a trip, so we travelled in comfort and moral superiority (it's one of those clever hybrid electric cars) to Whangarei and after waiting with him for some time, left Stephan when he was taken in for his operation, returning to collect him a couple of hours later.

The car was necessary so Stephan could sit with his leg up for the two hour trip home. 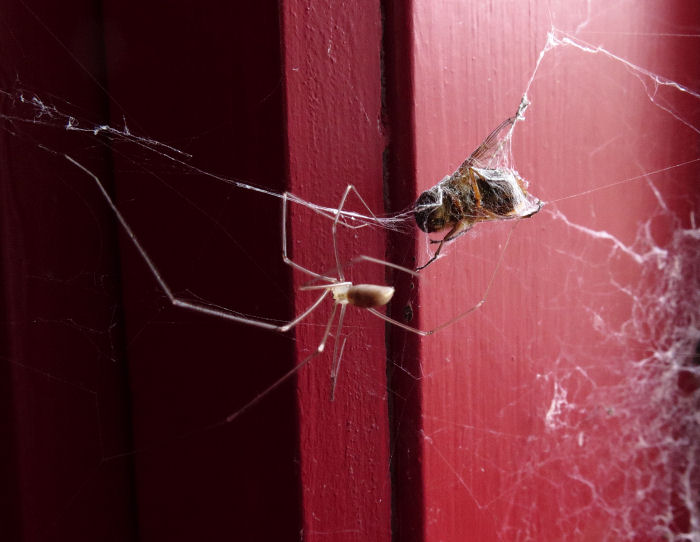 Unless one uses a lot of toxic chemical sprays, living in the middle of nature means nature also moves into your house.  I do try and maintain some level of control over the number of spiders living in the corners but at the moment they're beating me.

This is a grey house spider, the sort of creature most of us have always known as a Daddy Longlegs.  The fly had been caught and was buzzing with decreasing ability as the spider wrapped it in silk, winding the thread around and around with her hind legs. 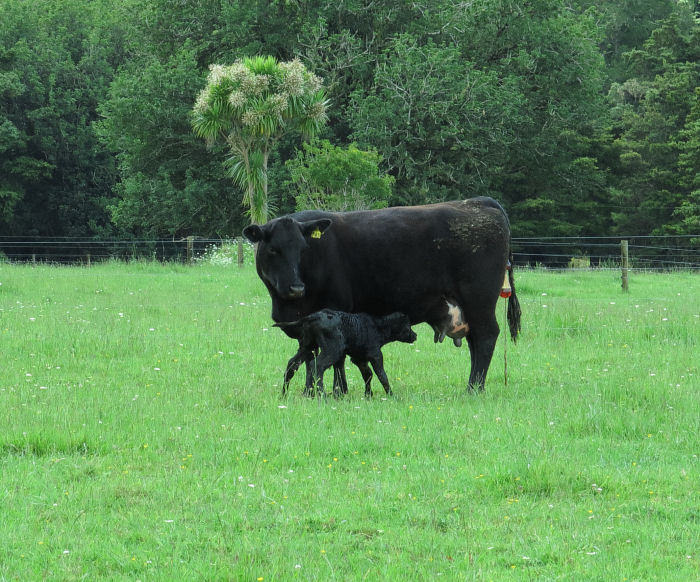 Having been out all day yesterday, I went out especially to check 743 this morning, before I went to town for a physio appointment.  When I got home I checked that she was out grazing in the paddock and saw nothing exceptional in her behaviour to alert me to her very probably having been in labour by then.

At 2pm I saw her standing with something black in front of her and was immediately suspicious.  I zoomed over to check and by then the calf was up and looking for her first feed.  She'd just been born and I'd missed being aware of any of it until it was successfully concluded. 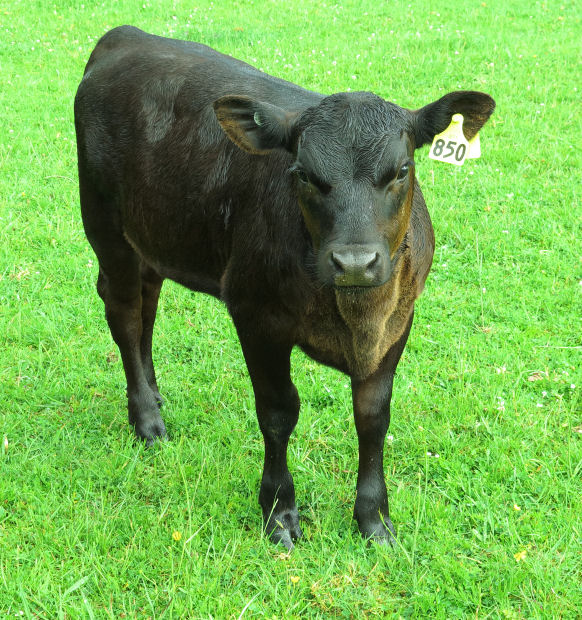 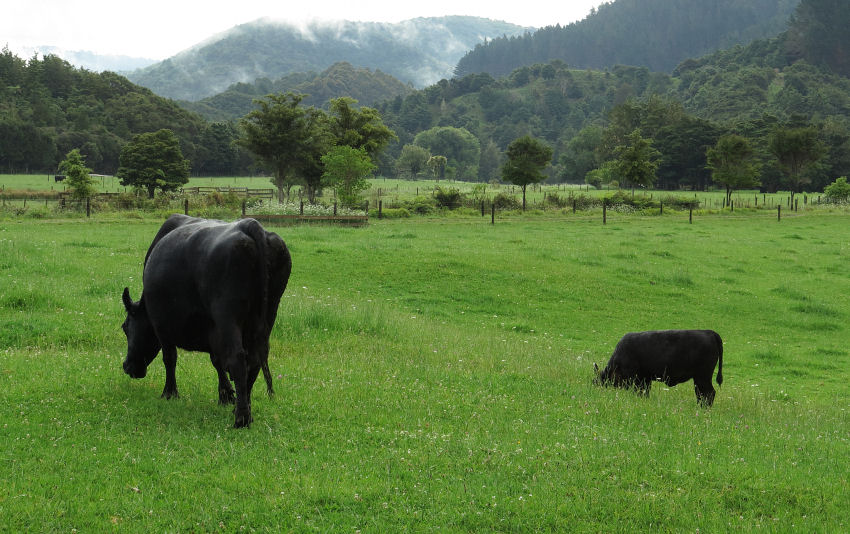 I recall there'd been a little drizzle before I took this picture - although the rain records show no measurement the following morning.  The air had cleared and the light at this time of year often creates these beautifully clear views up our valley.

Demelza is the cow and Zoom, the calf - can't see her number, but the little tight twist of hair at the end of her tail is telling. 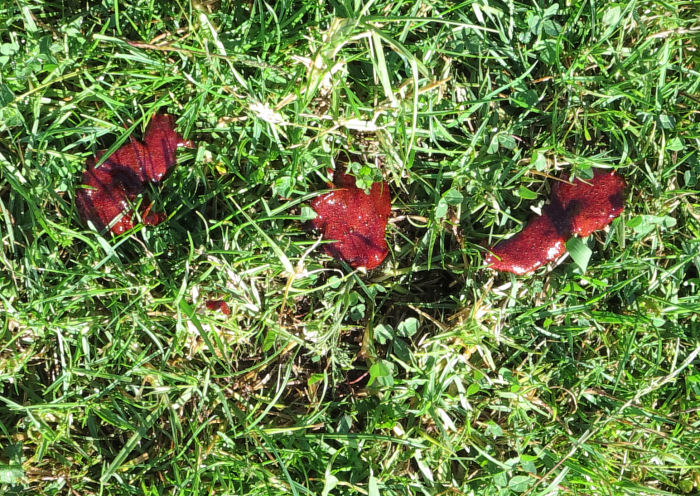 743's daughter is producing blood-stained faeces.  She seems lively and healthy.  I've seen something similar before, from a calf who'd had a very delayed birth.  Having not noticed 743 in labour, I cannot be sure what might have happened but recall she did seem rather fractious when I checked her in the morning before she calved, might perhaps have been in labour then.  I don't really know. 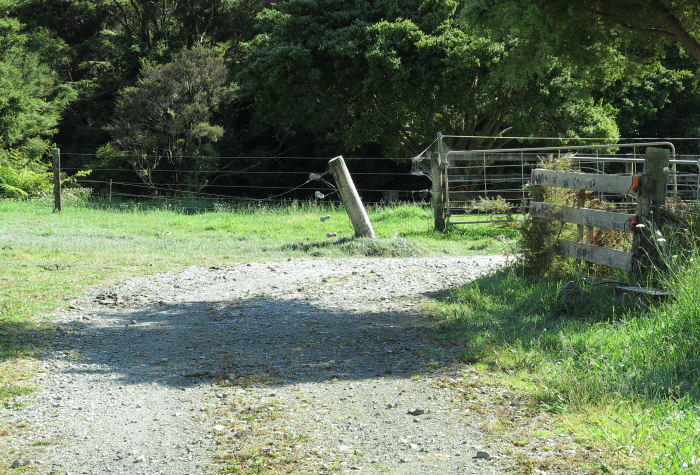 Ryan brought a load of lime to spread, early this morning.  I rode in the truck with him as we travelled around and around the Windmill paddock, then as he came out of the gate to the left of this picture, I got out to open the gate into the Camp paddock, so he could back through it to do that little area.  As Ryan was backing I was waiting for him to turn his wheel to angle properly into the gateway and I became alarmed that there didn't appear to be enough room between the front of the truck and where I knew the post was behind him!  There was no alarming noise and Ryan said it was my "what the **** is he doing?" facial expression that made him stop.

So we have some lime on the paddocks and a remodelled fence.  I told him I'd put it on the website!

In the afternoon, we had heavy rain for a couple of hours, a perfect 25mm to wash all that new lime off the grass and into the soil.  Fantastic! 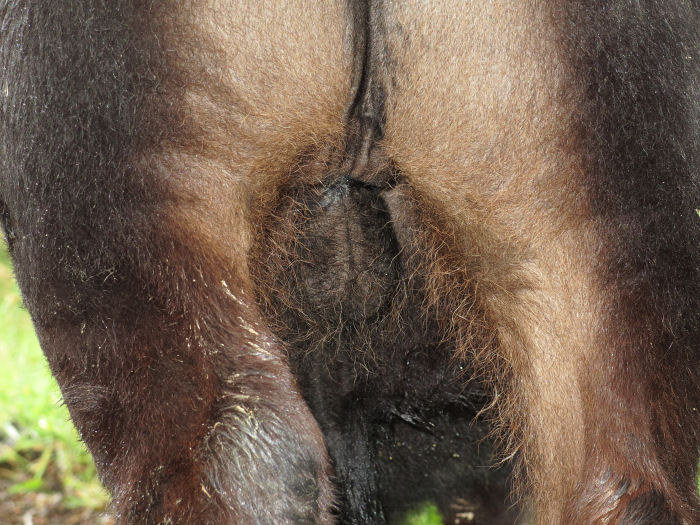 I check the castrated calves' scrota each day, to ensure everything looks as it should.  This is day three since the rings went on, so from now on nothing weird should happen.  Because all were reasonably small still, there are unlikely to be problems.

If you put rings on too late, they can't always tighten sufficiently to cut off all blood flow into the scrotum and swelling can result, which is far more painful and often leads to complications including infection, later, and the wound on the body ends up being larger. 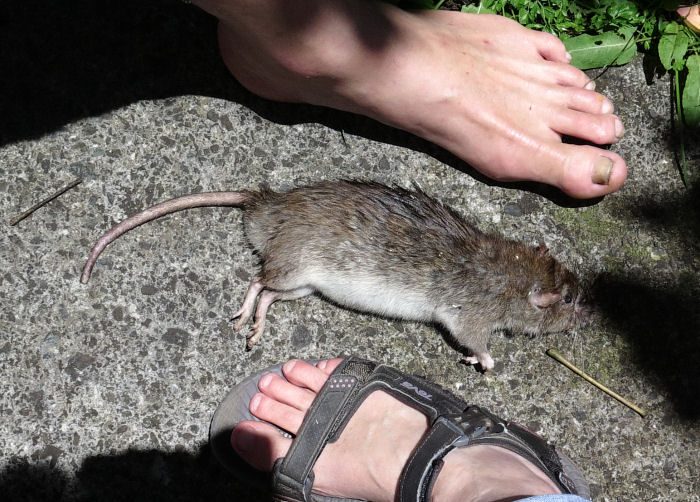 This enormous rat was caught in one of the traps behind the aviary.

If we'd had children together, I wonder what their feet would have looked like? 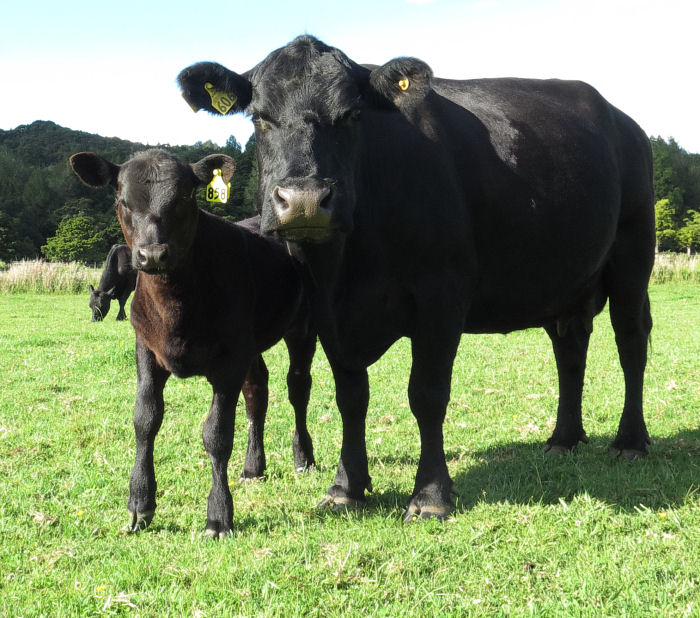 606's daughter isn't quite as calm as I hoped she would be.  Whether she stays on the farm or not will be a decision for a bit later in the season.  She's not crazy, which is a good start.

606's mother, 475, was our lovely quiet old cow who left the herd last year.  But many of her daughters and grand-daughters have been difficult to deal with in some ways.  It may be entirely my fault, in the choice of sires for those calves but sometimes the temperamental issues are impossible to predict.

This year my primary consideration in sire selection (when I buy semen again) will be temperament! 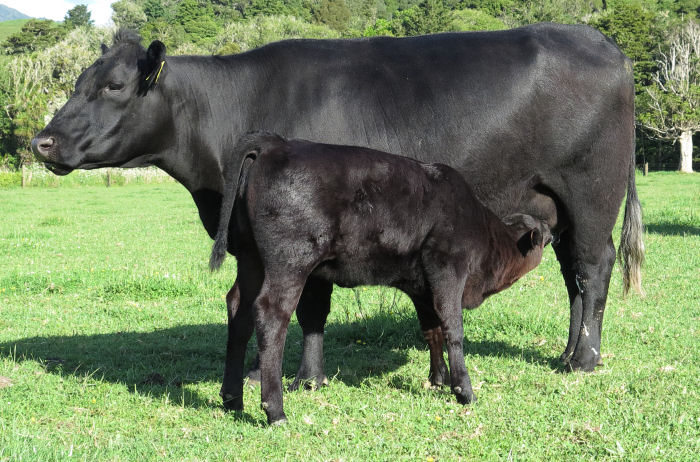 Gina's daughter, 168, is looking quite nice.  Gina, herself, is looking pretty damned good too!