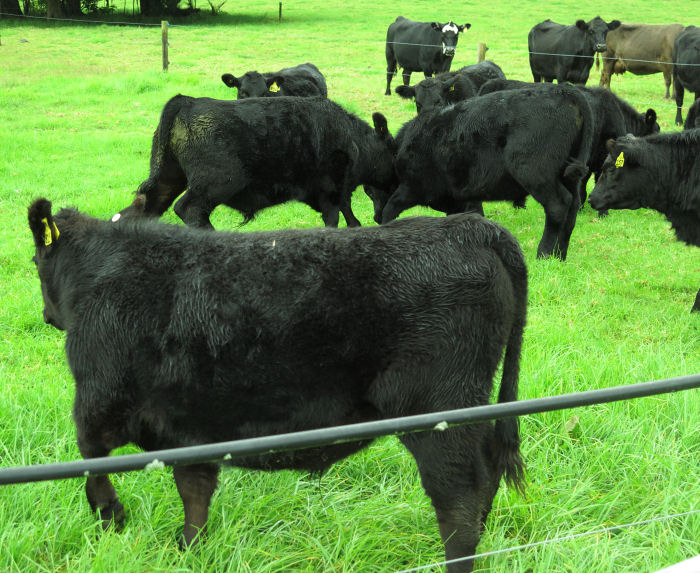 I mixed the so-far-weaned calves this morning and although they've only been separated for a few days, there was the inevitable tussling, primarily between the two bull calves.

I drafted the remainder of the main mob three ways: the older youngsters, 15 in number, came out and went off on their own and the remaining six pairs of cows and calves came down the lanes for weaning in the Windmill and House paddocks. 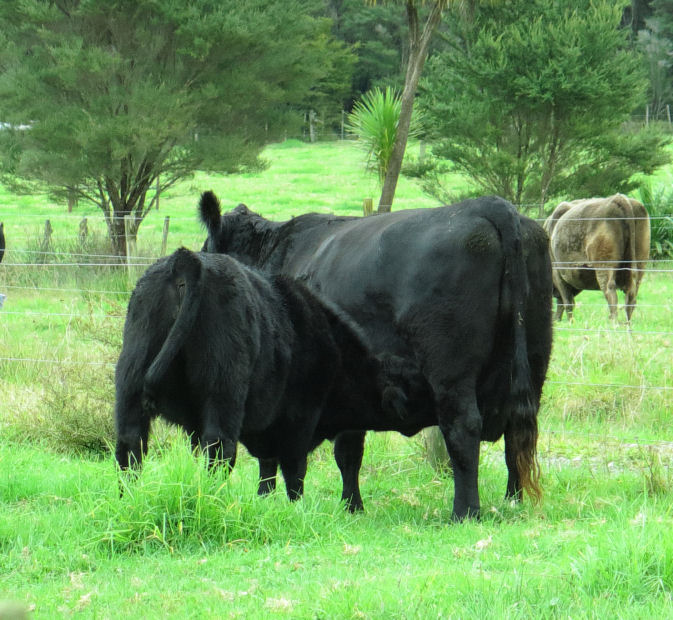 Imagen with her large calf, who will be separated as usual this evening and then the calves won't join the cows in the morning after milking but will go into the House paddock with the other weaned calves.  That'll be a surprise!

Out to a restaurant dinner with friend Brian for his birthday, with a selection of his very nice friends.  When you've been on superannuation for five years, you can afford to shout everyone dinner! 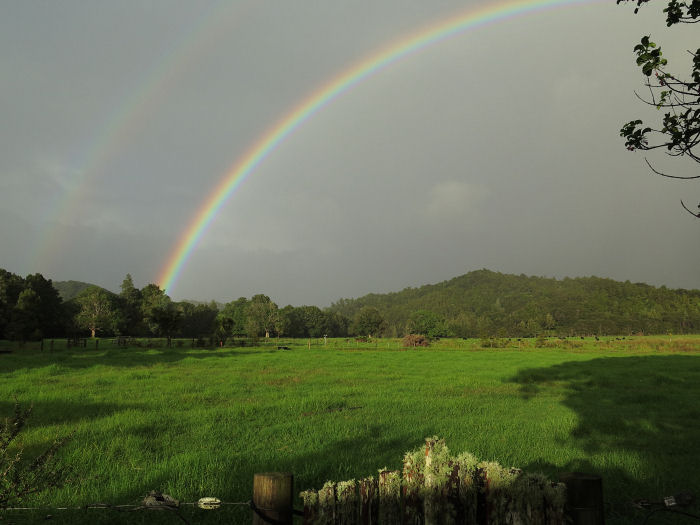 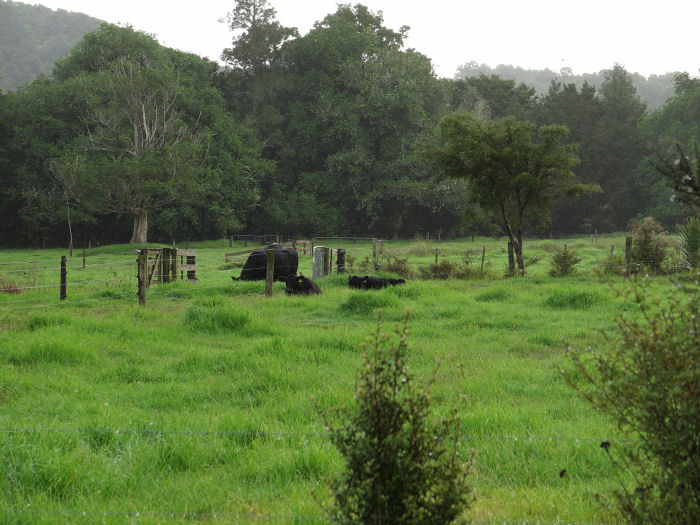 I put Zella's and Imagen's calves straight into the House paddock last night, which wasn't much change from their usual routine.  This morning they sat around waiting, near where their mothers had returned to grazing.  The rest of the calves were up the other end of the paddock, near their own mothers. 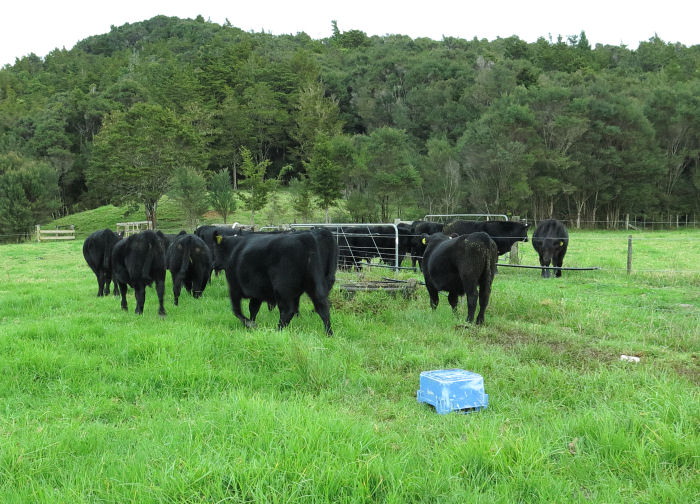 What a beautifully well-behaved little mob.  Getting 23 calves to go out of a gate in a corner like this and immediately down a lane along the same fenceline is quite a feat, in my experience.  They've been practising with their mothers for their whole lives but they often lose some of their sense without the adults' presence.

I took them back up to the Mushroom 1 to join the other weaned calves, so they're now a mob of 31.

Tuesday the 2nd of May 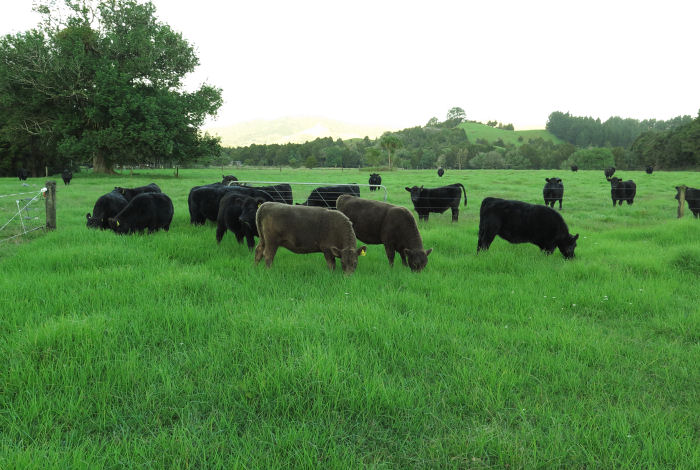 So far we still have a lot of feed around for all these lovely calves. 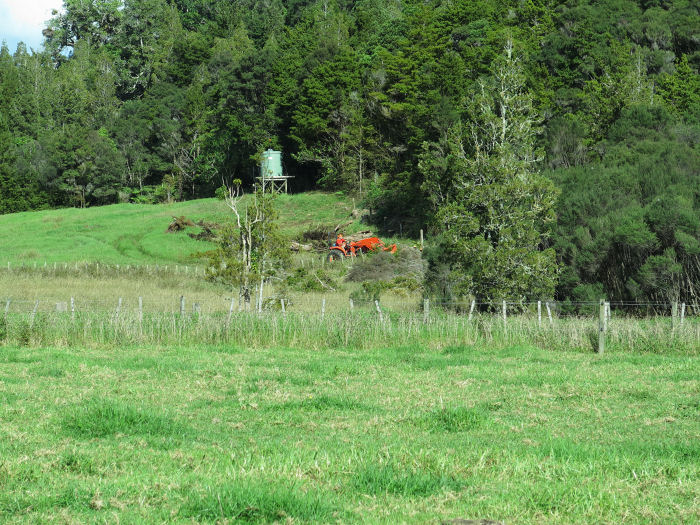 Stephan's been slowed down by his knee problem but the open boundary between our bush hill reserve and the neighbour's block has been waiting for too long.  A cow has returned to that block after being away for mating, so the fence must be done before there is any more trespass into the bush.

Stephan spent some time cutting the remaining trees from the fenceline and today took the tractor over to clear the line.  Each visit requires careful attention to cleaning the tractor on its return, which makes this a pain of a job. 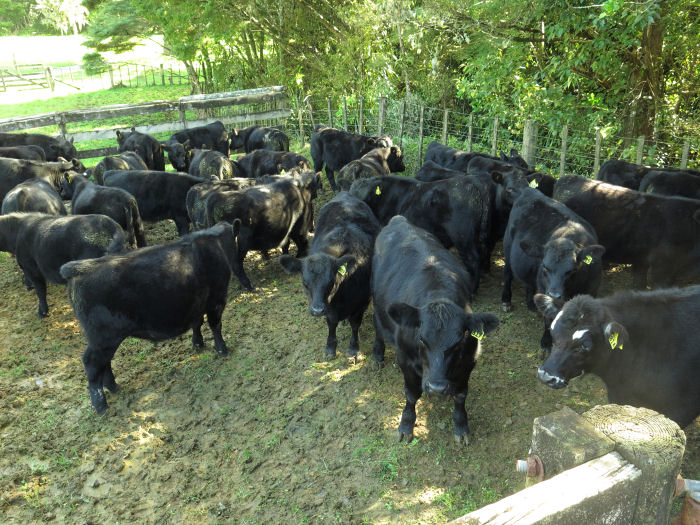 I brought all the calves in to the yards together this afternoon and put them across the scales.  I'd arranged with the vet to come later in the afternoon to do a pregnancy check on grey 807, because a couple of months ago I noticed some mucous where there shouldn't have been and wondered if she'd reached puberty very early and possibly been mated by the bull.  That doesn't happen very often, but I see a very young heifer on heat from time to time and it would be irresponsible to leave her unchecked.  She is not in calf.

Then because bull calf 163's behaviour is always a bit tricky and he's the younger brother of 137, who turned into a stroppy creature as he matured, I asked if we could castrate him during the same visit, which we did.  He nearly knocked the vet out, kicking straight back when the big band flicked back at his scrotum as the castration tool was removed - fright, rather than a pain reaction, we think.

Collating the data later, I found the calves have, as I suspected, been growing very well over the last few weeks, although compared with last year's weights, they're about three weeks behind in growth, presumably because of the drought and having a dozen too many animals on the farm.

Their adjusted weights are as follows: 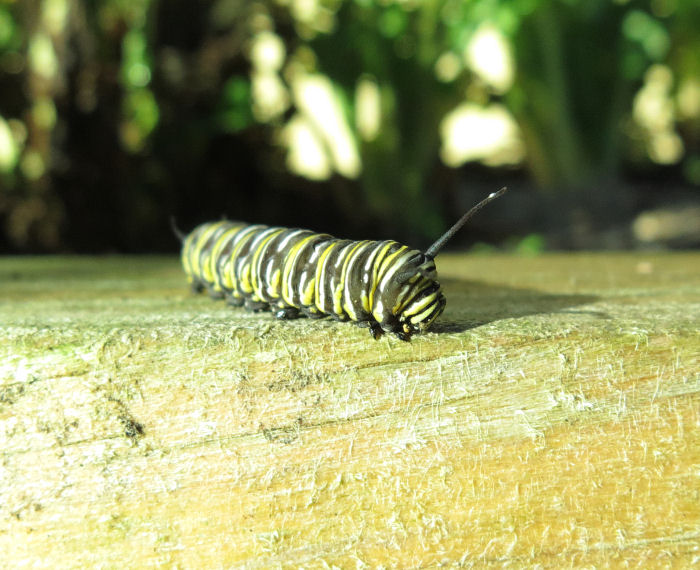 There are still Monarch caterpillars wandering around trying to pupate but the air is now much too cold for their success.  This one disappeared somewhere, perhaps carried off by a wasp, or maybe tucked away under a leaf in the garden. 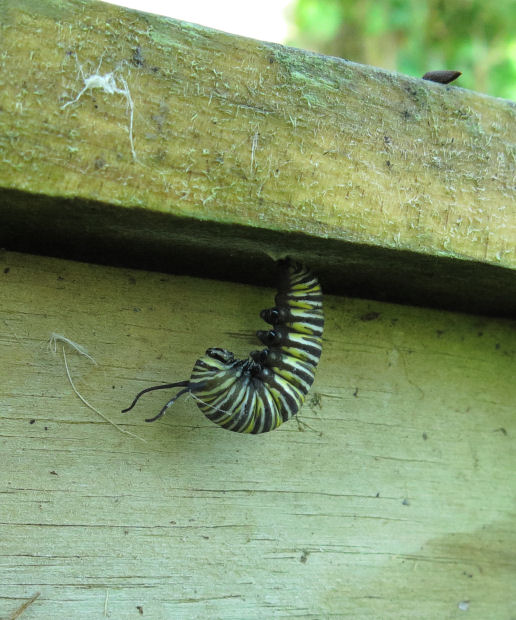 This one didn't complete its pupation before either being eaten or just dropping dead to the ground somewhere. 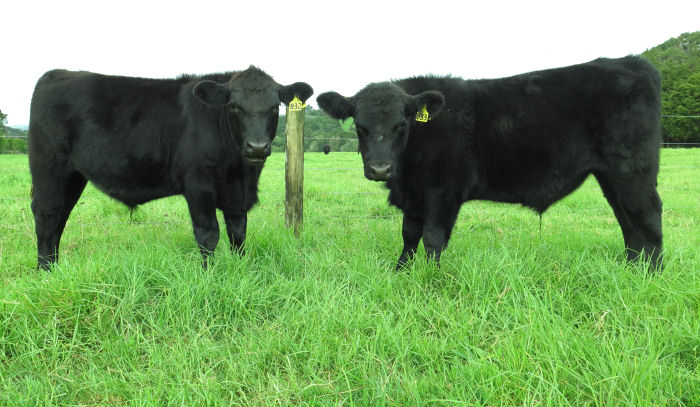 In the mob of 39 calves, Zella's and Imagen's sons still stick together, apart from the others.  Hopefully they'll start joining in more before it's time to leave the farm next week. 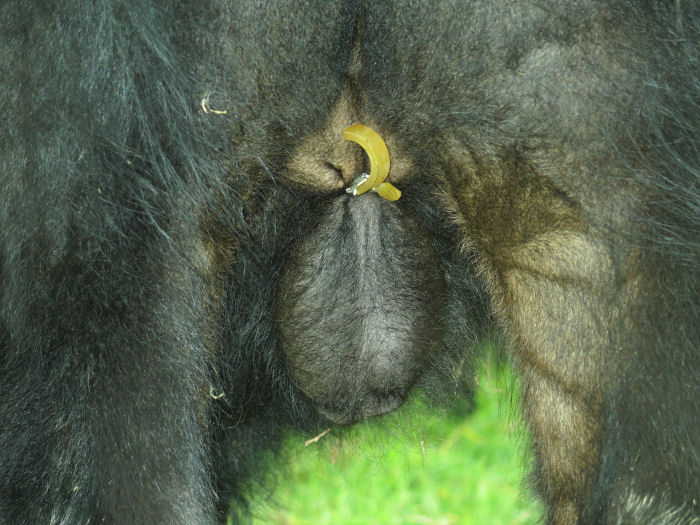 This is 163's scrotum with its sturdy rubber band.  He had a local anaesthetic at the time and then an anti-inflammatory injection which will give him three days' pain relief as well.  He's wandering around entirely normally and I will keep an eye on his general health over the next few weeks as his scrotum shrivels up and falls off.  Unfortunately he can't really go off with the steers, since he should be kept under regular observation until the scrotal wound heals.

I mixed the calves back in with the other older young cattle this afternoon, for grazing convenience, then spent some time wandering around looking at the heifer calves in light of their weight data, trying to make some final decisions.  Some have been easily decided for a while: the two grey heifers have always been staying; but 813, my favourite throughout the season, behaved badly in the yards a couple of times and I began to wonder if I'd just sell her.  Then one of the others I'd thought I would keep has been slower growing than I'd like and Jet's 811 has turned out better than expected.

I don't want to go into winter with too many animals again this season, so have a strict number of vacancies to fill.