The week beginning the 2nd of September 2017.
Saturday the 2nd 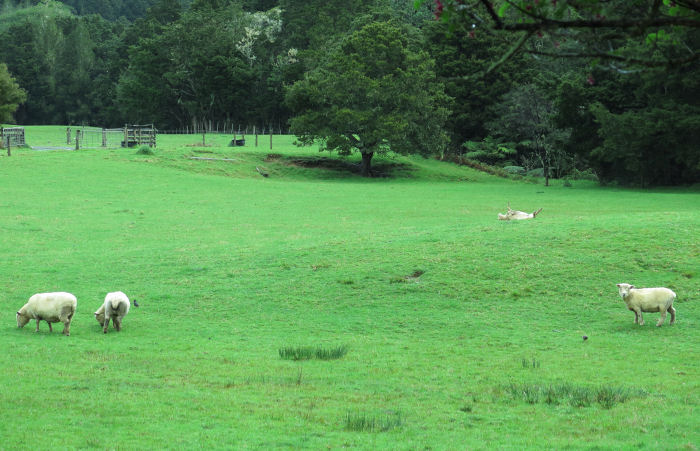 It must be cast sheep season again - and they're not even in lamb! 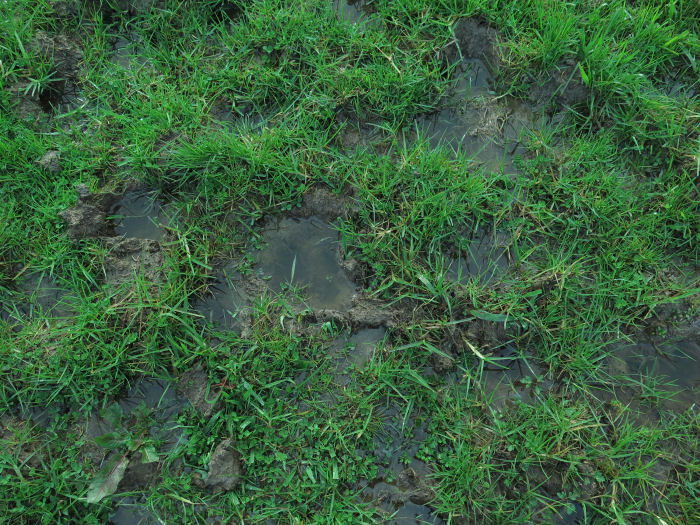 We wouldn't like you to forget the hideous conditions with which we're currently working.  You think it's wet in the city?  Try walking everywhere on the lawns and berms instead of the pavements! 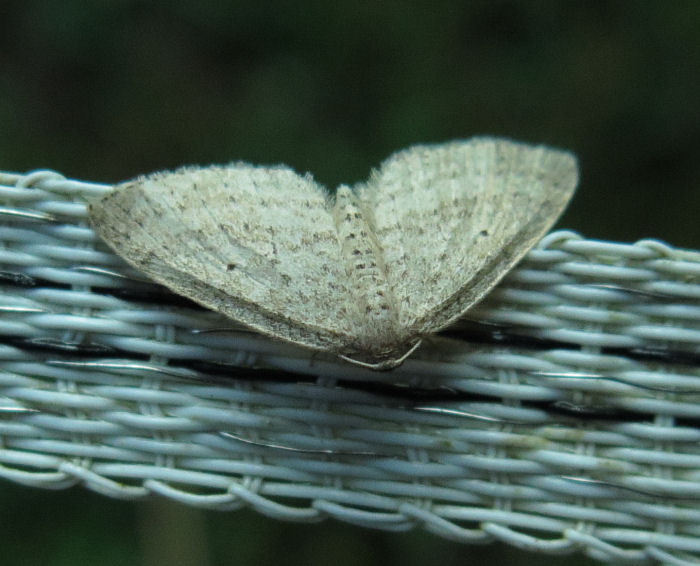 I spotted this little moth on the electric tape gate when moving the thin cows.  Because I don't carry glasses to look at close-up things, I have to take macro pictures and hope I've captured a good image for looking at later on the computer screen.

I don't know what species it is but like capturing them for later reference. 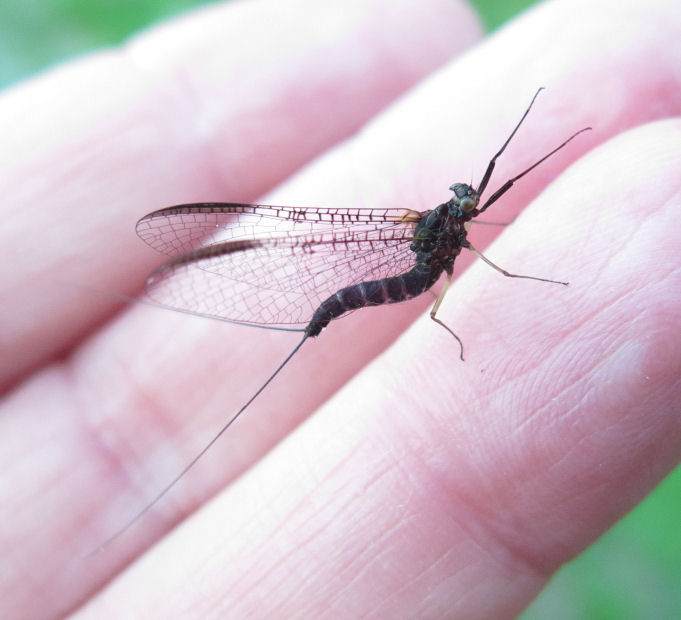 This weird little thing was flying near me as I walked along the track.  I put my hand in front of it so it landed and managed to get a picture before it flew off again. 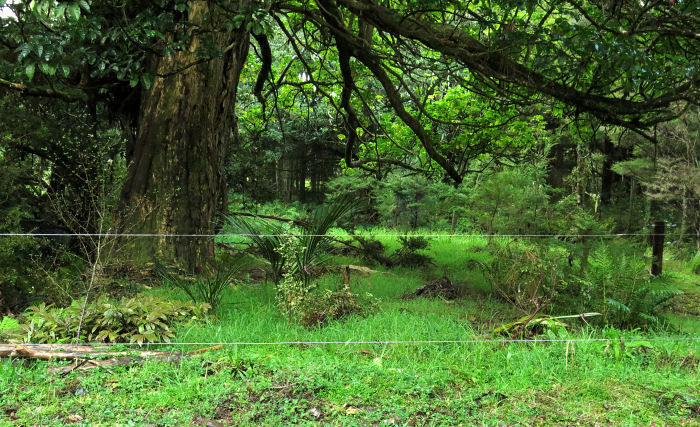 Watching the growth under protected trees is something we really enjoy, although it does take a lot of time and patience.  Neither of us can remember when the fence went in around this tree but it's been many years.  A lot of water goes over here in the floods, which may have slowed down the undergrowth's recovery. 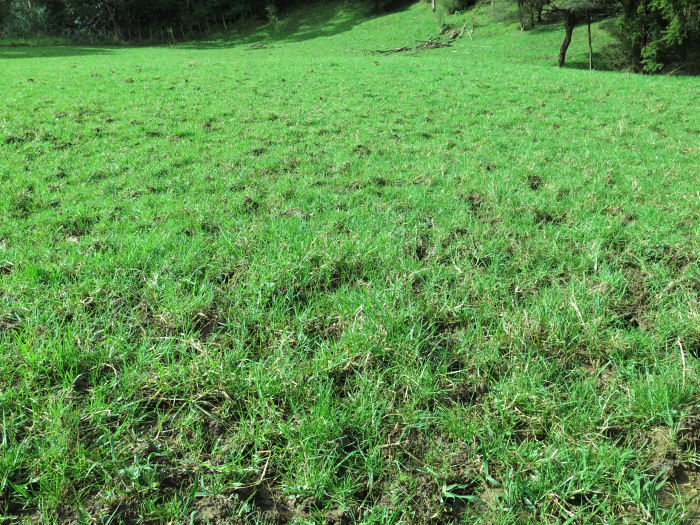 Looking across the Swamp paddock this morning, it is obvious that grass is growing where it isn't submerged. 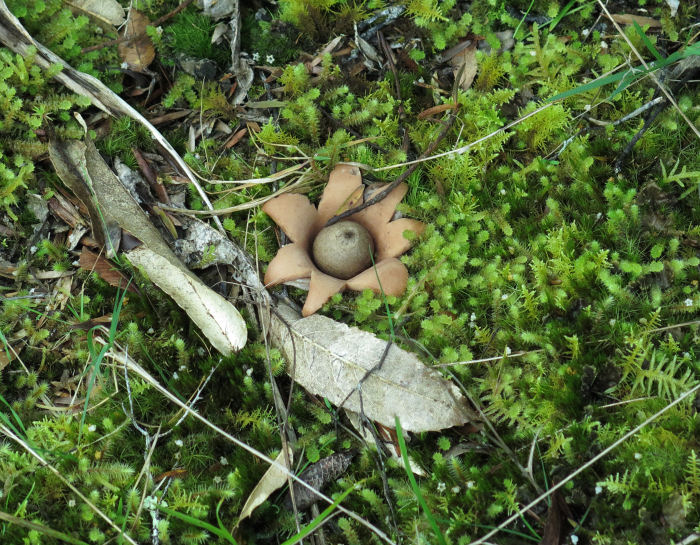 An earthstar fungus growing outside the Over the Road fence on a shady bank. 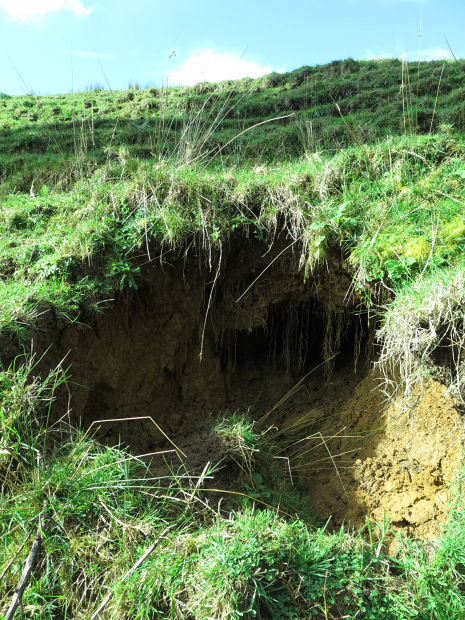 Aliens have abducted part of our hill!

This is down the slope from where I pictured Ella standing, back in April.  The hillside is gradually shifting down into the existing gully that runs down this side of the paddock.  The summer plan is to fence that gully and the fencing will have to extend up and around at least part of the slip area, if it's going to behave like this. 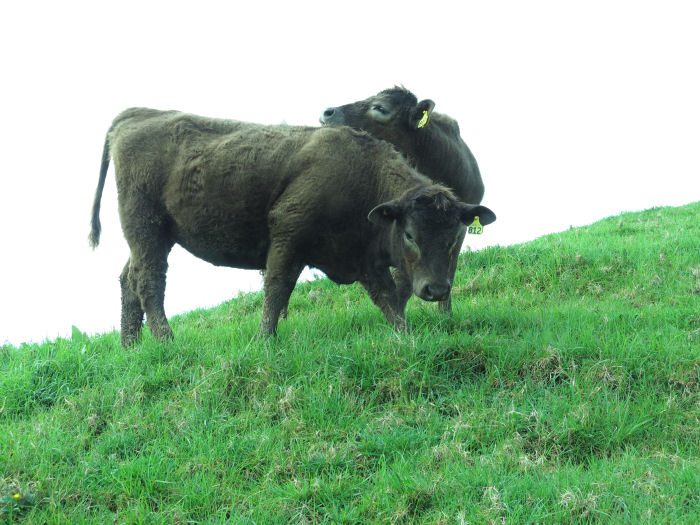 I opened the gate between the two paddocks Over the Road on Sunday and today went to make sure all the youngsters had shifted themselves through.  The grass growth here has been excellent, with longer between grazings than I've been able to manage down on the rest of the farm. 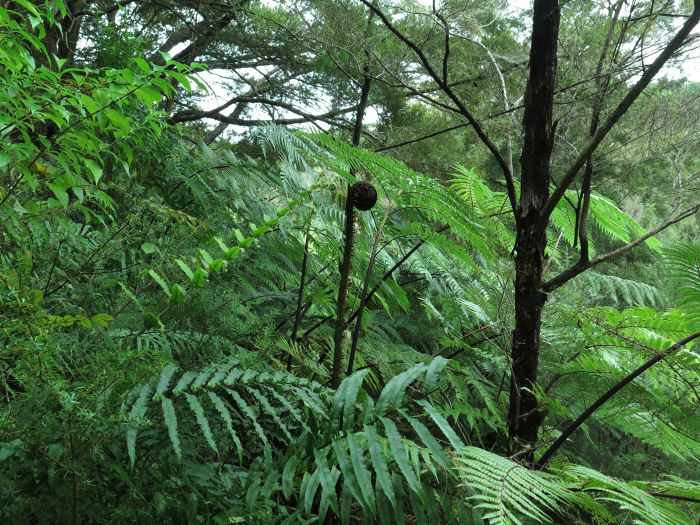 This is a different sort of regenerating area, up a steep slope from the big swamp in the Big Back paddock.  I pushed through here for a look on my way out to see how Stephan was getting on.  Lots of plants were already growing here when it was fenced off, so it has been quicker to thicken up than flatter, more often grazed areas. 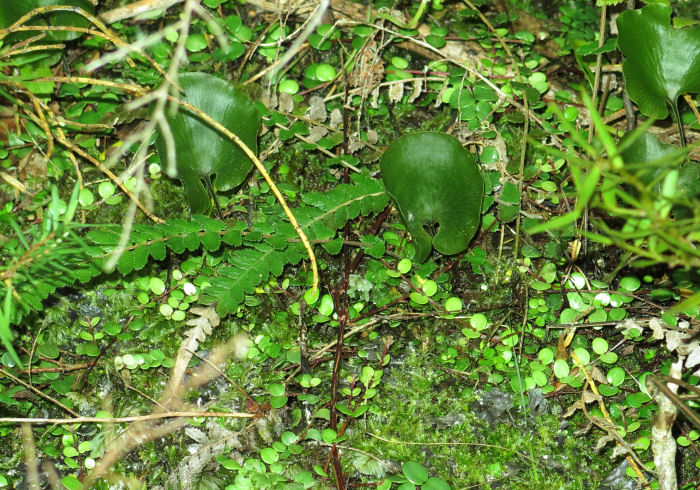 These are Kidney ferns in the same area. 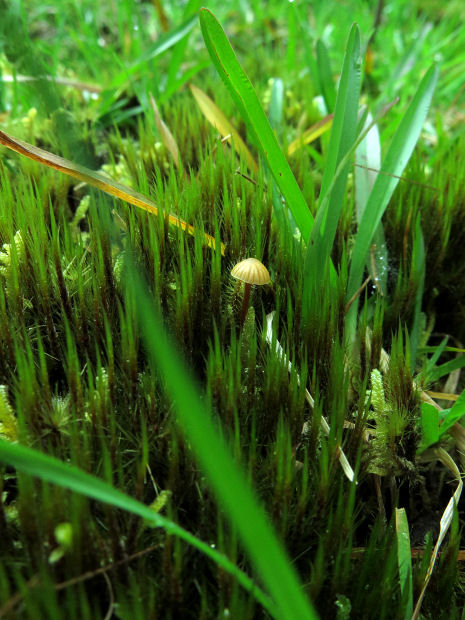 As I climbed through the electric fence, I noticed this tiny toadstool in its pretty forest of moss. 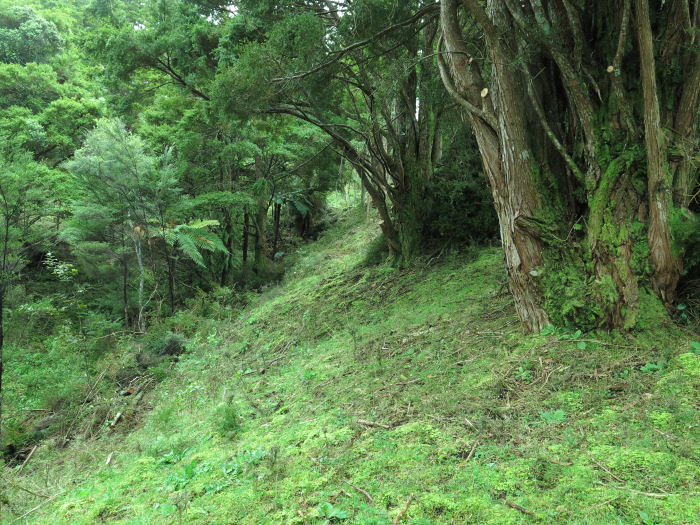 This slope was harder to see and walk along before Stephan pruned the big, spreading branches of the Totara trees.

We sat together on a dryish bit of ground under one of those trees while he had a break and listened to and watched an insect-hunting Tomtit.  It's lovely out here. 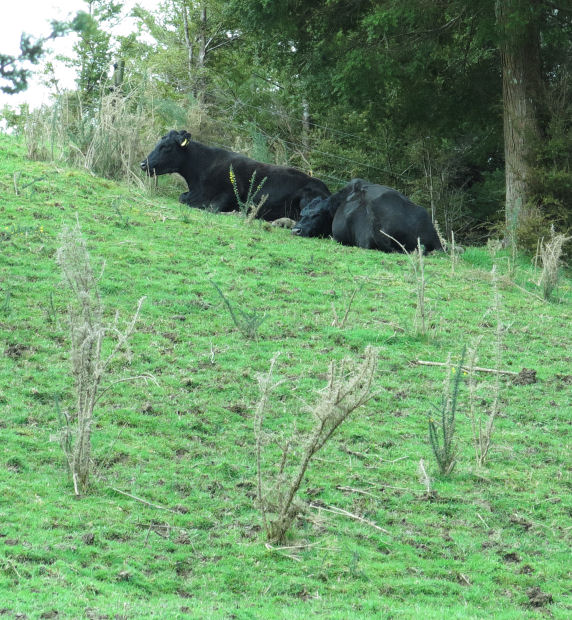 Walking back out of the paddock I noticed Eva having a snooze on the slope up from the gateway - she with her head turned back round behind her shoulder.

Eva is looking pretty thin and I'm worried about her.  Sometimes she looks a bit tender in the way she walks but not so much that I think there's something causing her an acute lameness.  After the thunder storm she looked slightly worse and I suspect she got knocked at that time.  She could have got thin because she's expending a lot of energy on healing some unseen injury or perhaps she's not been spending as much time eating as she needs to be. 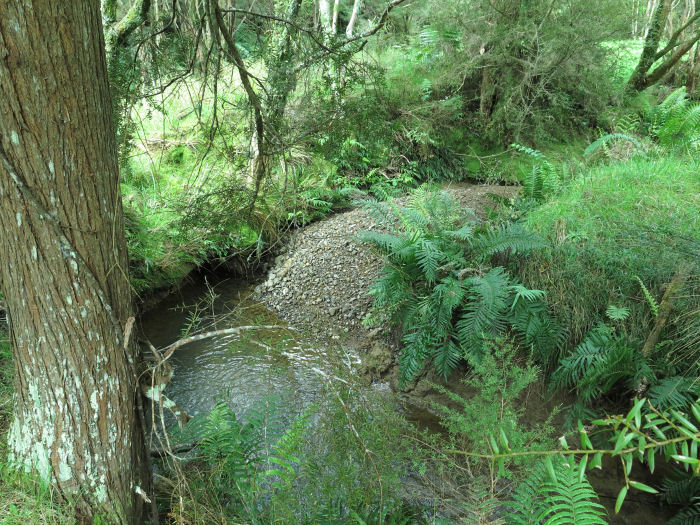 This is the stream running through the Bush Flat paddock.  When we fenced it off we included in the reserve the green peninsula in the background; but the stream has since pushed its way through a hole in the bank to the left (shown in the next picture) and in recent big flooding, a mound of gravel has completely blocked the old flow around to the right.

We may eventually move the fence again to grab back that bit of grass as the now-dry bit of the stream bed fills in.  The water course on the other side of the peninsula still runs because there is lots of water coming down from the Bush Hill reserve block.  It's hard to predict what water will do! 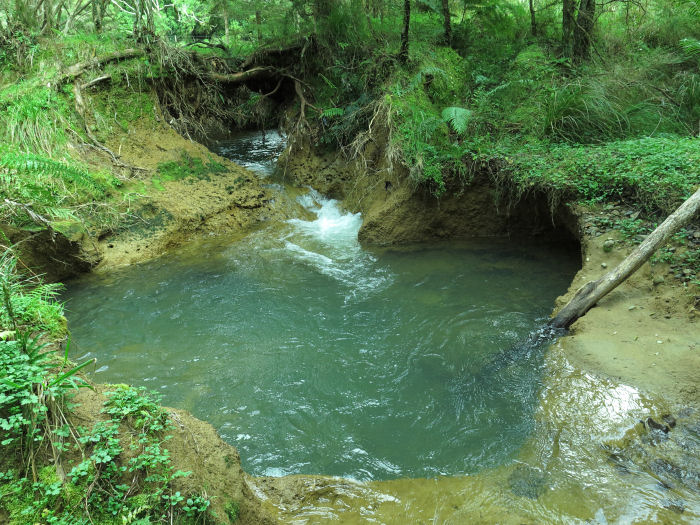 The water must thunder through that hole in the bank during floods to have scoured out such a deep pool on this side.  The peninsula mentioned above is off to the left.

I sense great relief in the animals when the weather is a bit warmer than usual and the sun shines.  It must be lovely to lie out and sleep in the warmth for a change. 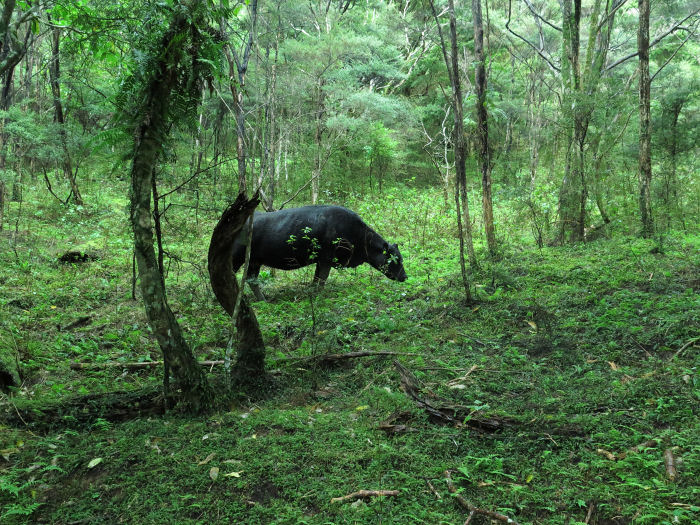 Most of the 11-cow mob were out on the Spring slopes but three were on the other side of the hill, browsing around the fern-covered gully. 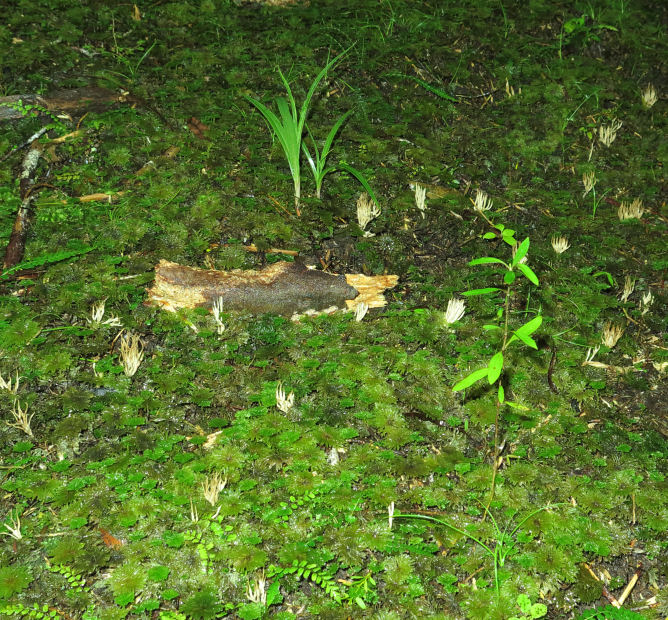 I wonder how many orchids they eat?
The greenhood orchids (two in the centre) are coming up but not yet flowering. 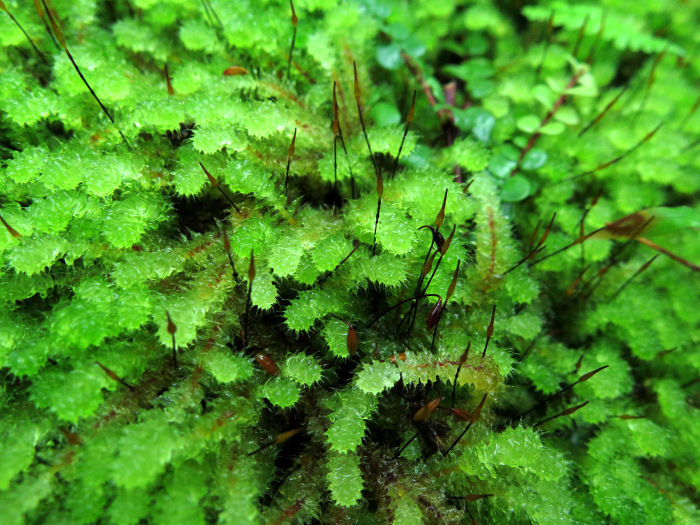 This moss is all over the place and at present is always obviously full of water.  It's pretty and brightly coloured and grows in great cushiony masses. 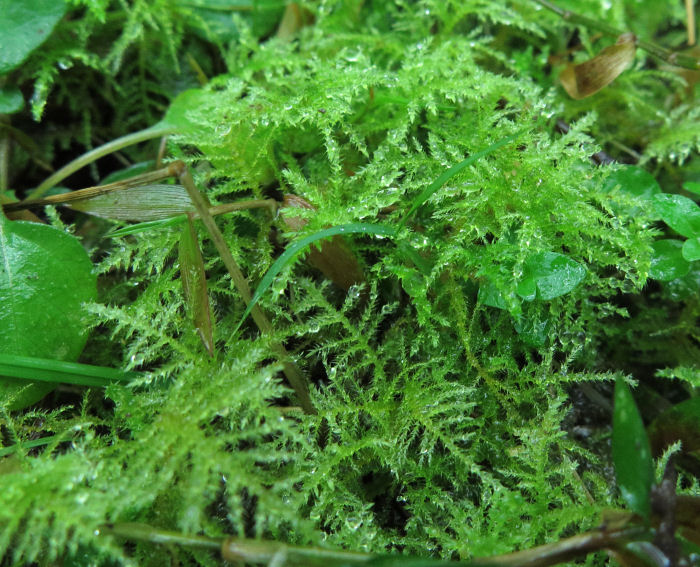 There are so many things still to learn.  One day I'll have to tackle ferns, mosses, lichens, fungi ... 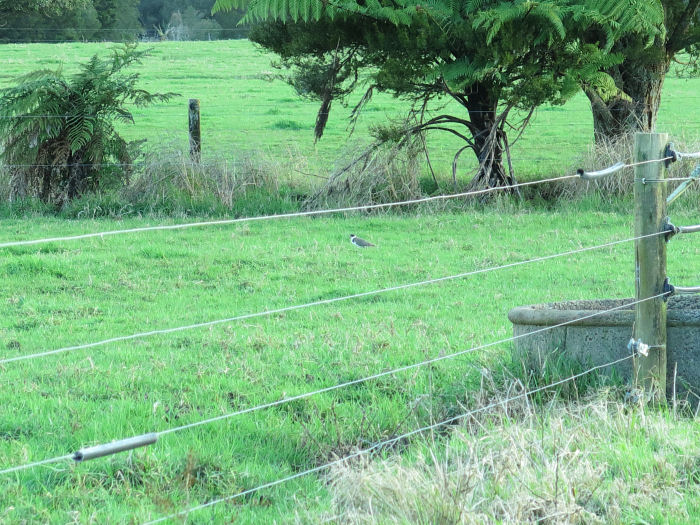 A half-grown Spur-winged Plover chick at the top of Flat 1.  There are usually at least two chicks in each clutch, often three or four.  Something must have had Plover chick/s for dinner sometime in the last weeks. 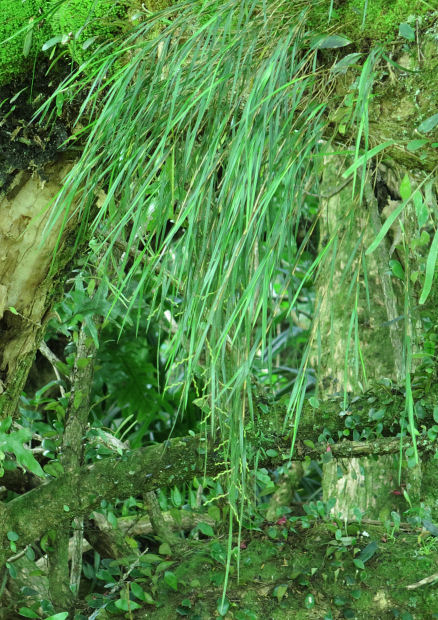 The Peka-a-waka, Earina mucronata, flower buds are appearing and soon there will be festoons of lemon and white orchid flowers hanging in the trees. 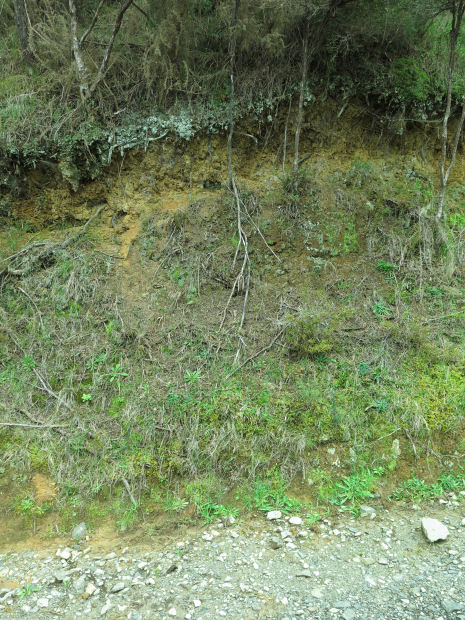 There isn't anything in this picture but there nearly was, if only I'd had the camera in my hand as I came around the corner.  I looked up and saw, in the loose soil to the left of that vertically hanging small branch, two little brown quail.  I had surprised them in the midst of a dust bath and it took a moment before they registered my presence (and I theirs) and they whirred off on their fast little wings to safety. 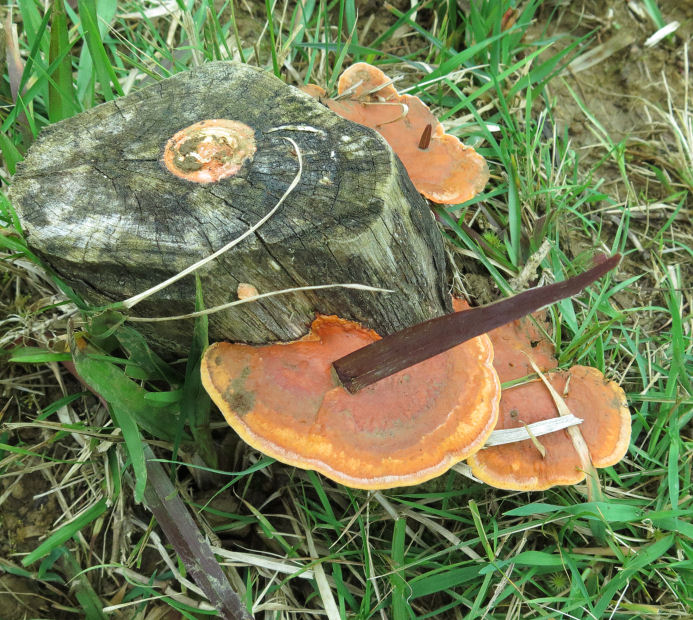 On the other side of the farm, in the Big Back paddock, evidence of a frenzied, murderous attack by grass spears on some bracket fungi! 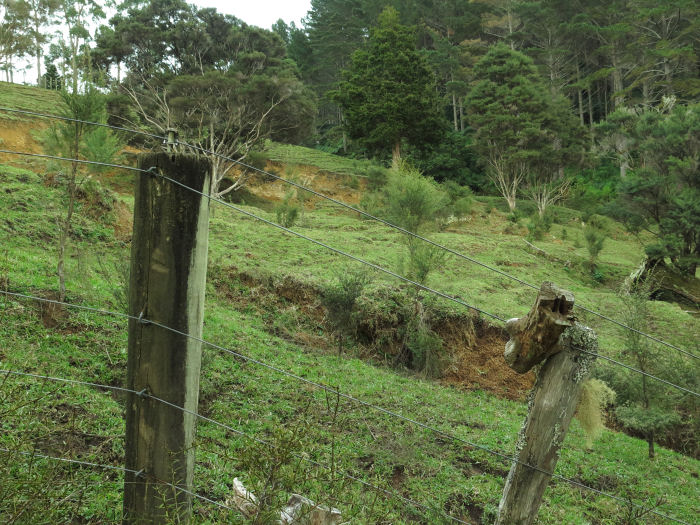 Behind our place, on a neighbouring property, is this ecological disaster-in-progress.

The whole hillside has been slumping for years at the top and it is now all slowly moving down into the gully... 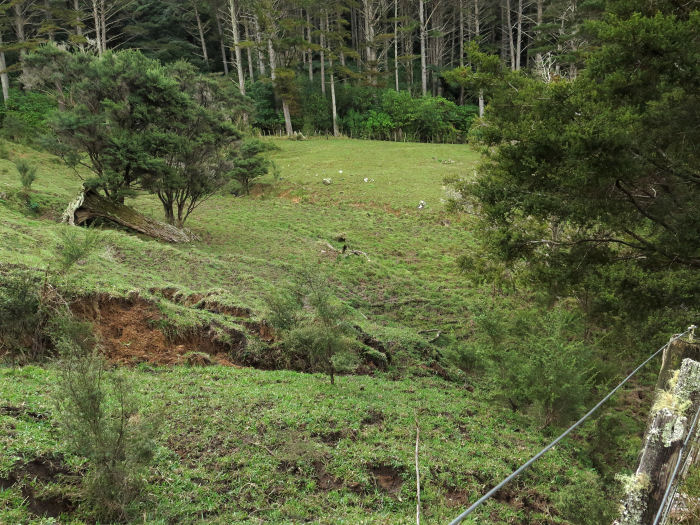 ... which itself appears to be flowing down the hill, mostly moved by water movement through and beneath it all but spurred on by continual overgrazing by heavy cattle.

The whole lot has nowhere to go but through the boundary fence and into the top of our big swamp.  Because there are regularly cattle on the neighbour's place, Stephan has to keep an eye on how much the fence has moved and periodically goes out to lift it up and back in to place.  We do not want the neighbouring cattle stepping over the fence, as was often the case in earlier years, now into our swamp reserve. 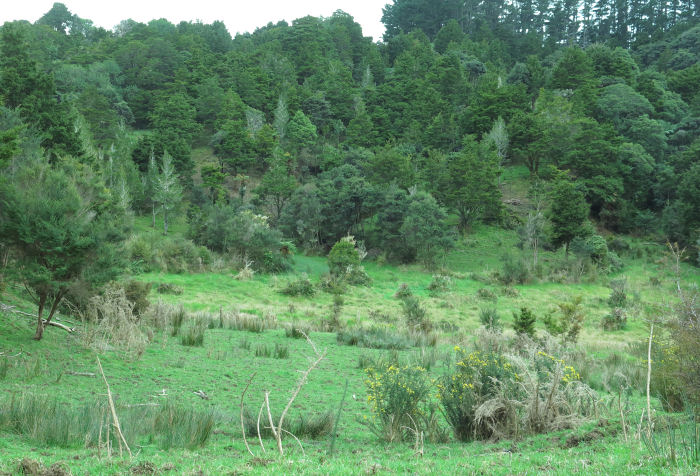 I'm sorry my photo colours seem to be all over the place.  It's partly the light at this time of year - dull, grey and wet most of the time, bright sunlight in other, rare, moments - and probably my weird eyes with their new, bright, clear lenses, to whose colour influence my brain has still not adjusted.  Apparently we see more yellow as we age and our eye lenses thicken but the replacement lenses let more blue light through again.  I'm still conscious of the difference in some lights, when the grass and trees look much bluer than I think they should.  When processing photographs, I get in a complete mess.  Maybe I'd better leave the camera to organise its own colours and see how that suits for a while.

Here is a photo across the swamp to the areas Stephan has been clearing.  There's a lot more ground visible than there was in this earlier photo. 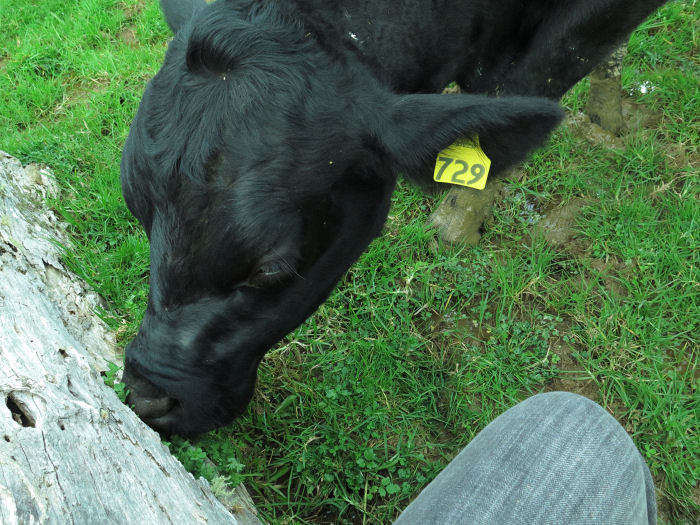 It's tough dealing with wild cattle.

I opened the spring gate into the Bush Flat so the cows could come into there from the two Big Back paddocks and then sat on the Puriri log to watch them as they moved. 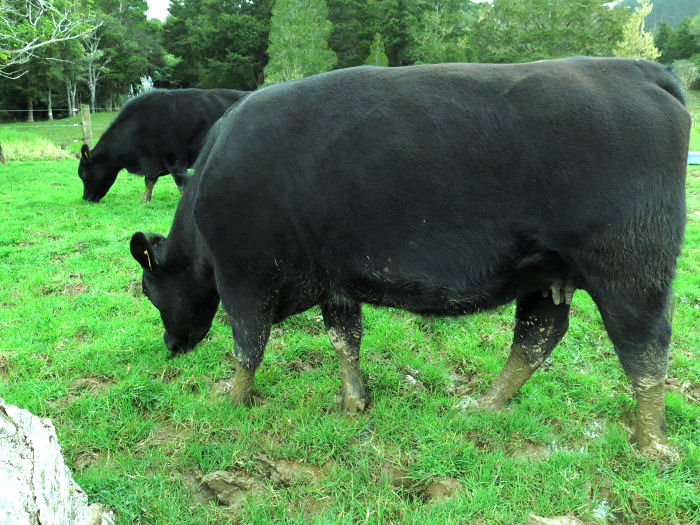 R3 heifer, Gina 142, is thankfully in nice condition approaching calving.  I thought Zella would be the first to calve this season but the gestation and calving-date spreadsheets suggest that this heifer might beat her.

Gina is Emergency's daughter and Emergency has an average gestation of 273 days.  Gina, her second calf, was born at only 271 days.  Usually it'll be a first calf with the shortest gestation, so a shorter second one may be more significant.  In some of the cattle, gestation length has fairly reliable heritability, so I will be prepared for her to calve sooner than I might otherwise have expected. 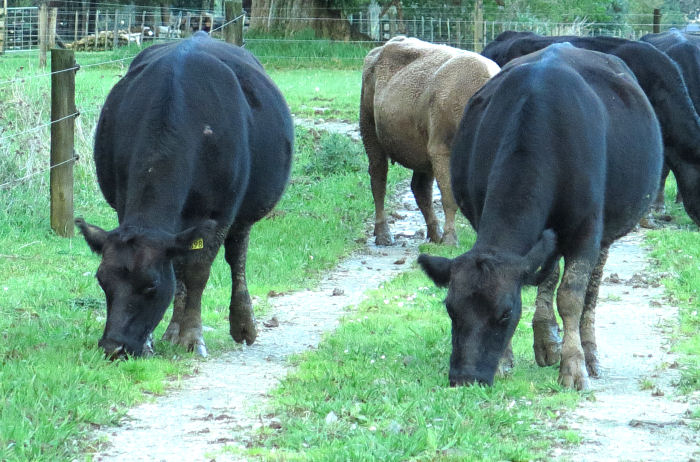