Zella has mastitis.  Damn.  Her front left quarter, never affected before, is producing clumpy milk and she's sore and unhappy.  I got her some drugs from town and began a three-day treatment. 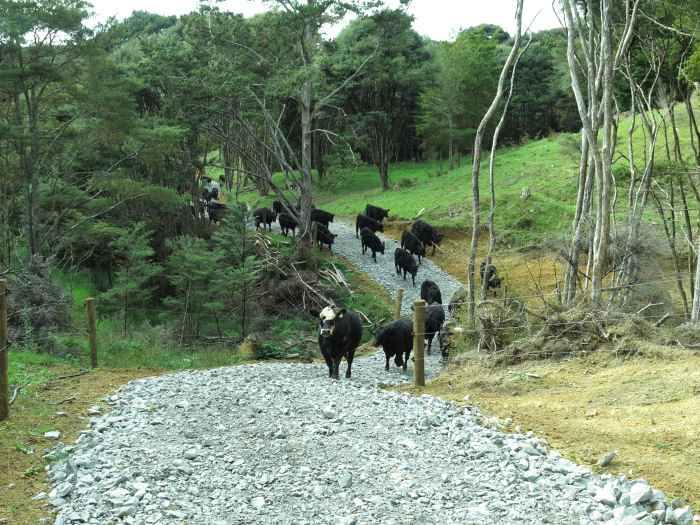 The young cattle followed me along Route 356 to the Middle Back gateway and all went through.  White-faced 787 seems to be quite a good leader when I call. 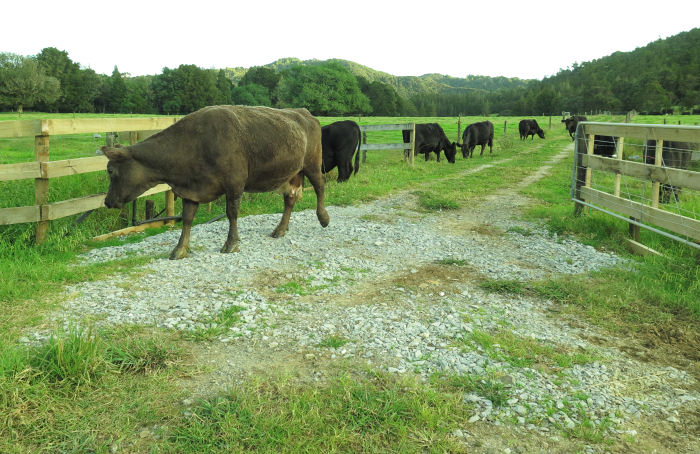 In the evening I drafted the cull cows and Demelza out of the mob of 39.  Demelza will become Zella's companion when Imagen leaves.  I'll swap Demelza and Imagen over in the next couple of days.

At the front of these is Curly; I'm sorry to send her away but she spent last winter straggling behind the others whenever I moved them and that's a sign she's not coping as well as she was when younger. 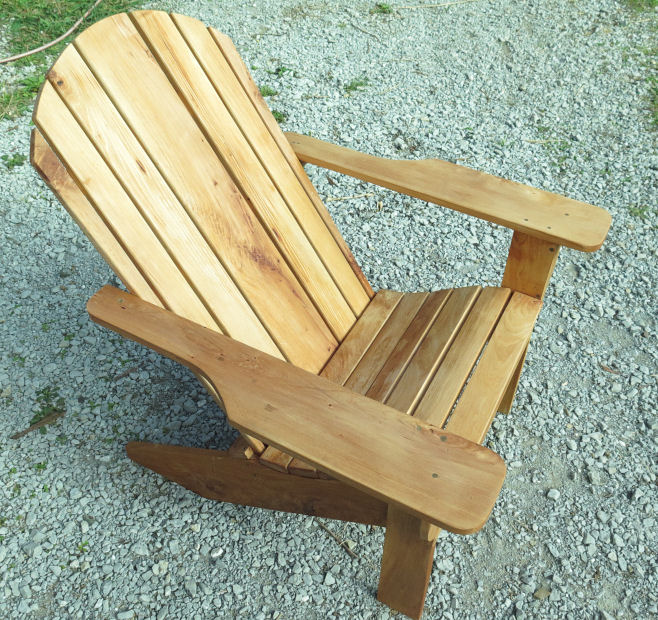 Stephan made this chair from the Totara he felled when preparing the fenceline between the Middle Back and PW and gave it to Brian as his birthday present.  I'd like him to make a few more! 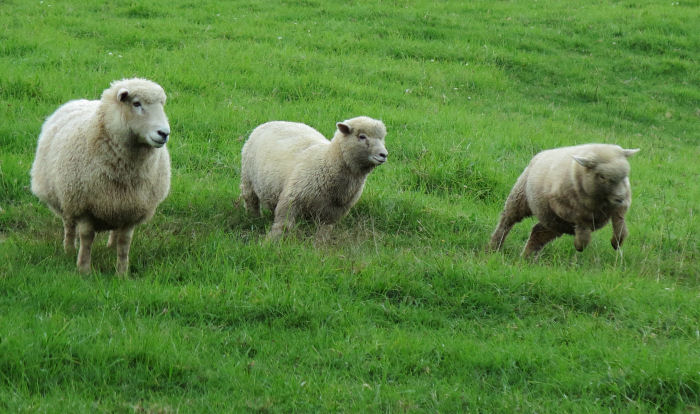 Swapping Imagen and Demelza wasn't quite as smooth an operation as I anticipated, so I was waving and running, rather than taking pictures.  Imagen is, somehow, boss cow of everyone in the herd except her daughter, Zella.  She snorted her way into Flat 1 where the cull cows were waiting, chased Demelza away from the gate so my calm change-over became a wild run up and down the paddock and we ended up taking Demelza out the other end while Imagen showed the others who was now in charge. 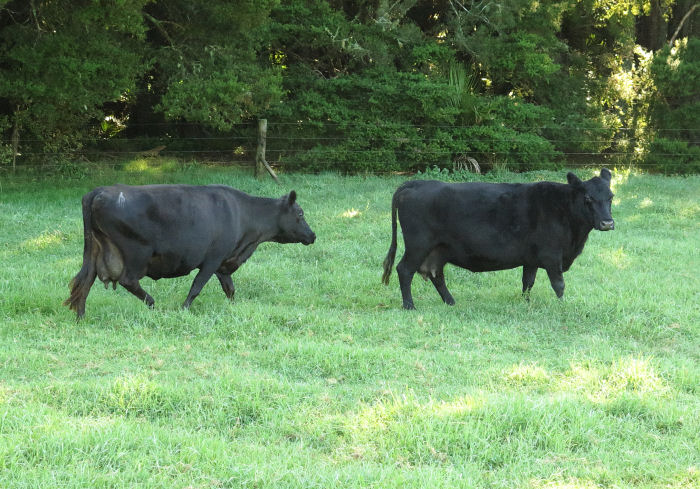 Zella was a little perturbed by Imagen's departure from her paddock but both appeared a great deal less upset than I had feared and after sniffing and then ignoring each other for a while, Zella and Demelza settled down to a contented companionship quite quickly.

I've wanted to get Demelza off the hills, since she is getting on a bit, now 13½ years old. 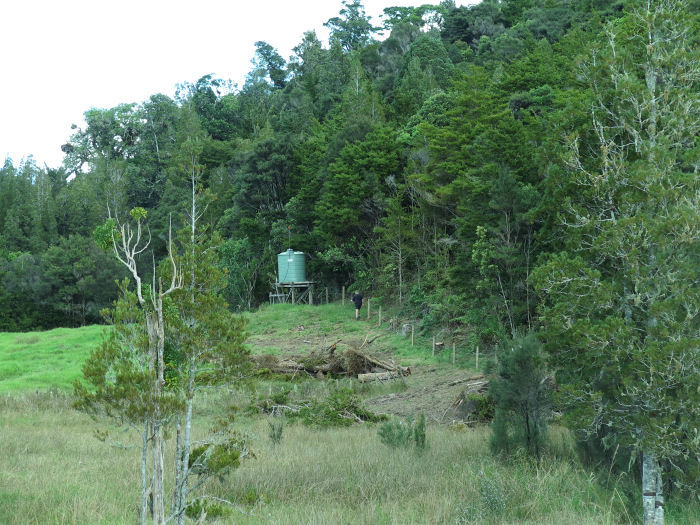 The main part of the boundary fence is posted and Stephan went back there today to run wires and hammer staples. 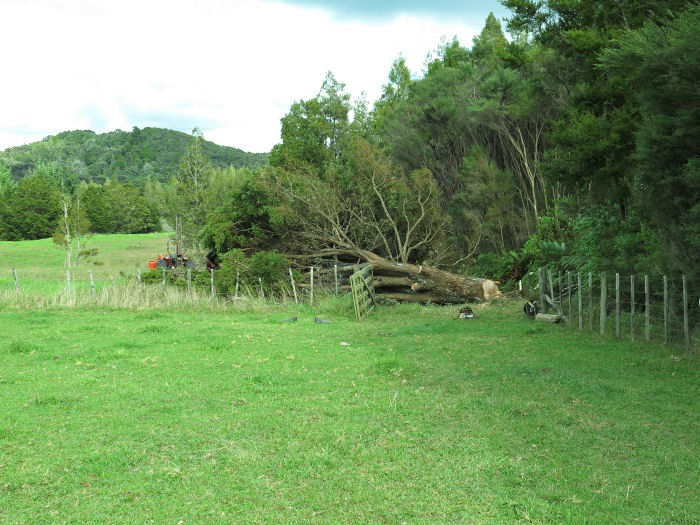 The big Totara at the corner of Flat 4 had to come down, since it had grown up through the original fence.  Some of the fenceline has been stepped out a little from the actual boundary line but we wanted to keep it as close as possible at this end to fit in with the existing fence it will join. 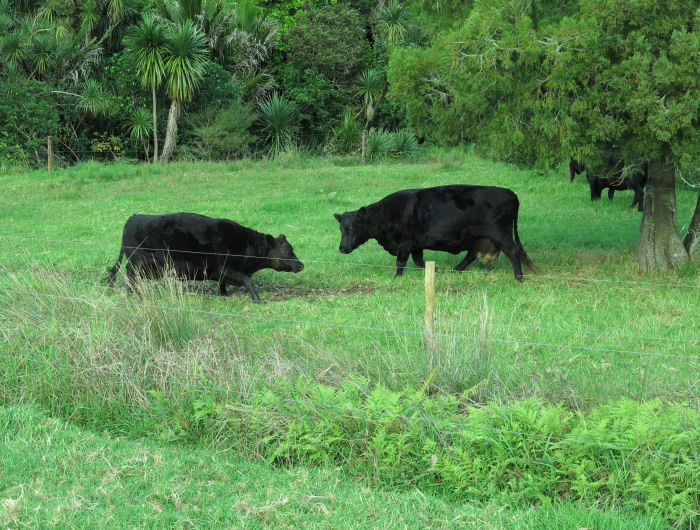 I opened the little triangle between Flat 1 & 2, where there's still some flood debris lying in the grass.  701 went and rubbed her head and neck in it with great enthusiasm, until Imagen spotted her and chased her out of the way so she could have the pleasure instead.  Imagen is here on the right, with 701 quickly getting out of the way with an extremely submissive look. 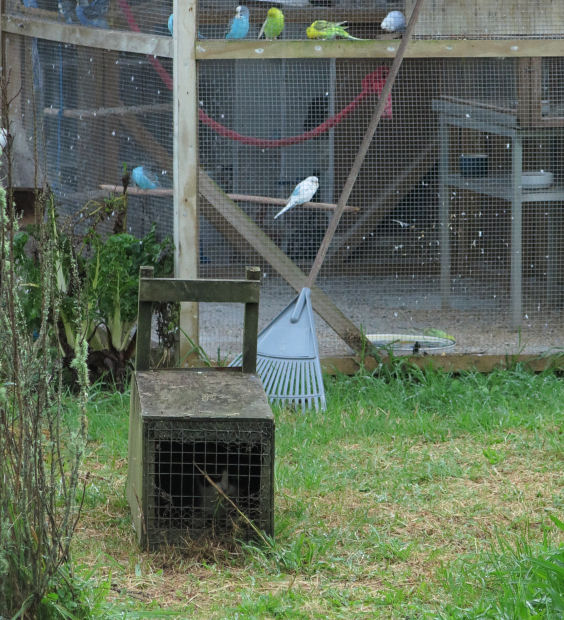 I found a little tabby stray cat climbing up the aviary netting a couple of nights ago so Stephan brought a trap back around here and baited it, today catching a very large black-and-white tomcat.  His head was enormous and so were his other bits.  I'd never even seen this cat around.  It just goes to show that keeping traps set even if you don't see pest animals around, is a very good idea. 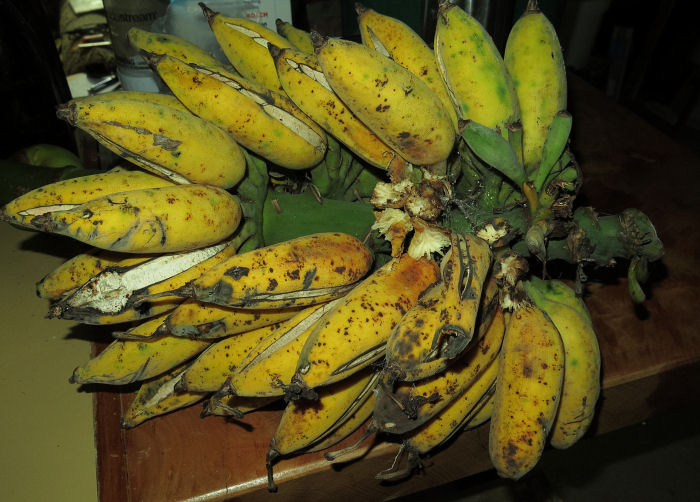 Bananas from our garden.  Some of them are split but they're delicious!  We managed to eat nearly all of them before they got too soft. 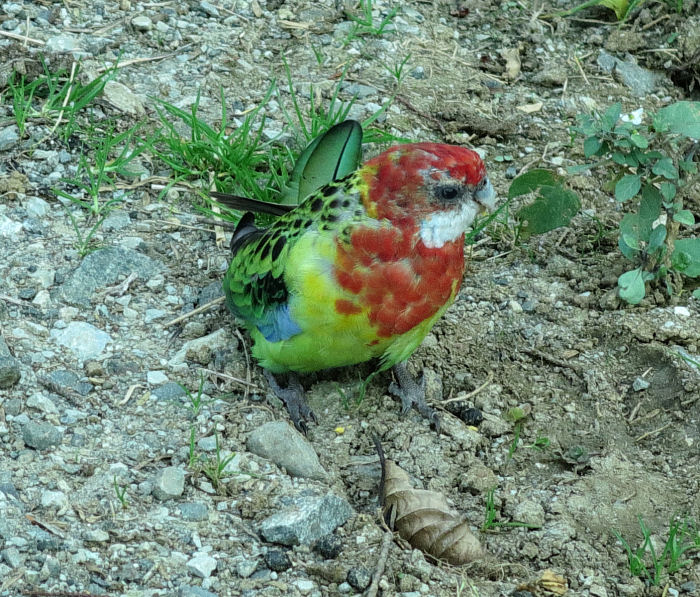 This Eastern Rosella was sitting half-way up the Windmill lane and didn't move even when I stopped to take its picture.  But it did eventually fly away up into a nearby tree, so I have no idea why it hadn't done so as I approached.  It looks a bit moth-eaten, as if it is not perhaps entirely well. 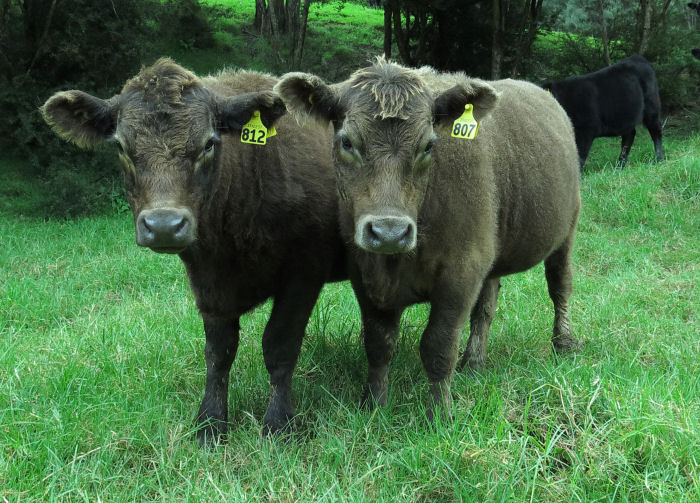 Unlovely strawberry eaters!  I've seen these little millipedes before, munching my strawberries, deep inside the fruit. 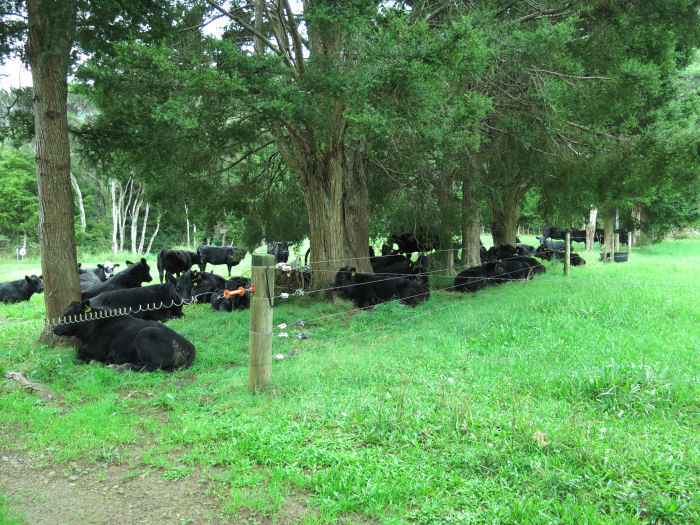 Fifty-two young cattle relaxing in the Back Barn paddock this morning, before I moved them around to the Bush Flat.  As they walked along the lane alongside the Mushroom paddocks, I drafted bull 160 out of the mob and in with the other two bulls, with whom he must now live.  Mr 151 then spent the next half an hour chasing him around the paddock!  Bully. 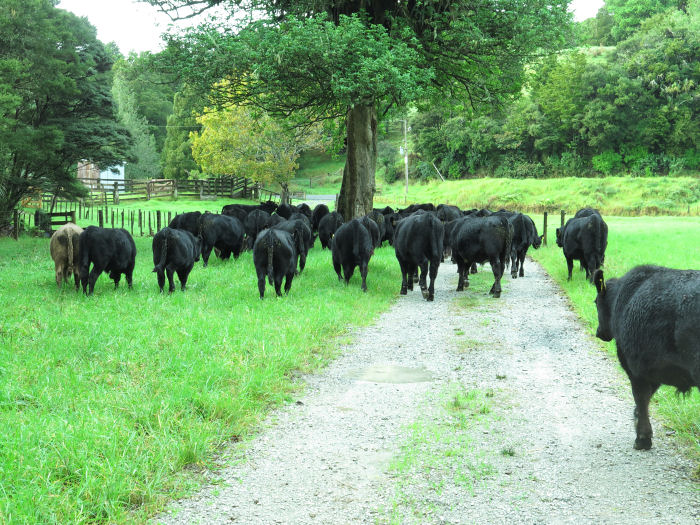 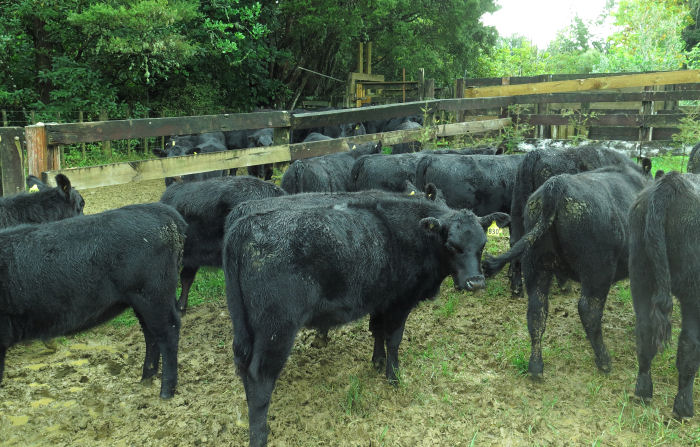 Waiting for the truck to come: 13 heifers in the foreground, 17 steers behind.

I always feel a bit sad sending them away but at least they go on to live happy lives, cared for well until they're big enough to become beef.