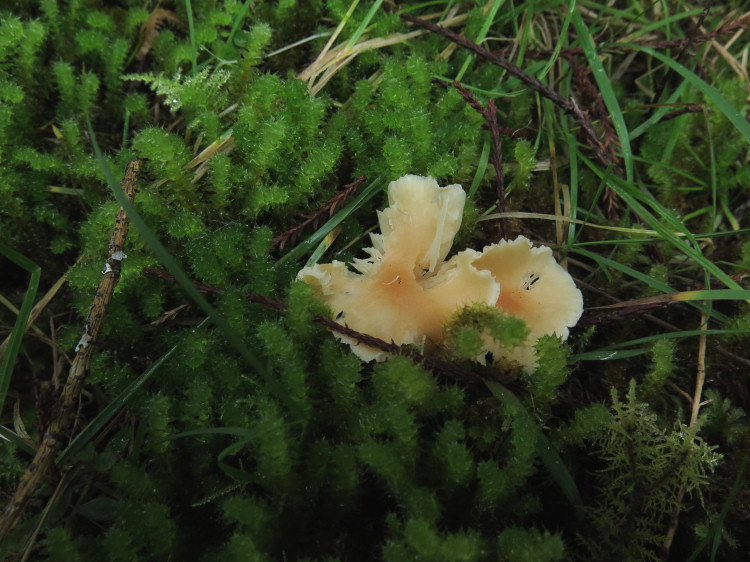 Isn't this pretty?  I walked up through the Big Back South to open the gateway between it and the North paddock for the 15 cows.  Then through one of the lovely reserves where we'd fenced off some huge Puriri and a watercourse that runs between them in the winter.  I saw lots of Sun Orchid plants along the way, mostly in open areas on the paddock side of the reserve fence.

I was drawn to the delicate appearance of this fungus growing amongst the moss. 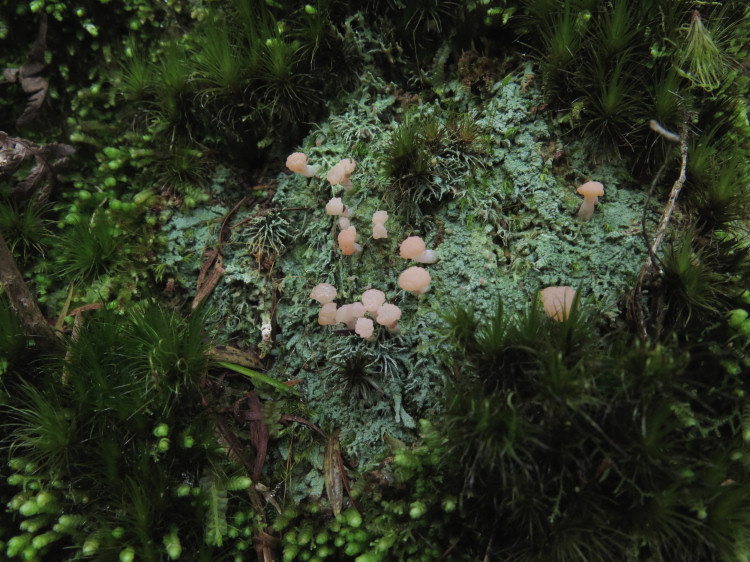 This patch of lichen and several others like it, are on the bank beside the track at the bottom of the Big Back North.  I believe these are the fruiting bodies of the flat grey lichen. 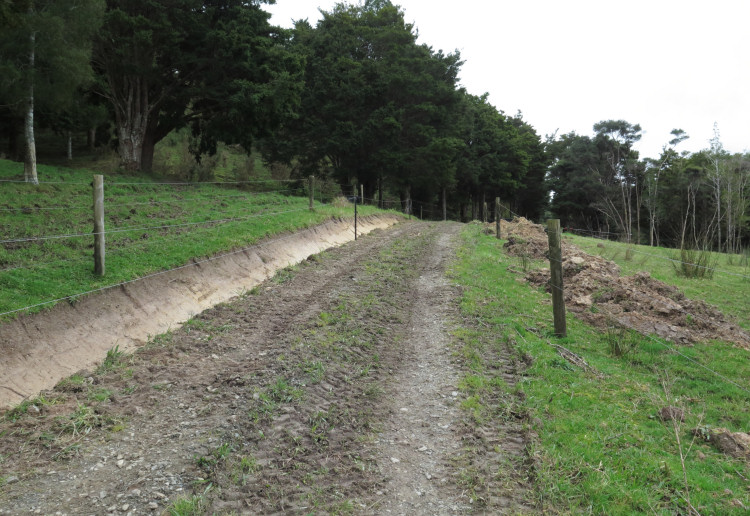 On the left, the new two-wire fence to protect the new drain.  I wondered if doing this might make the lanes feel a bit narrow but they're still a comfortable width for the cattle. 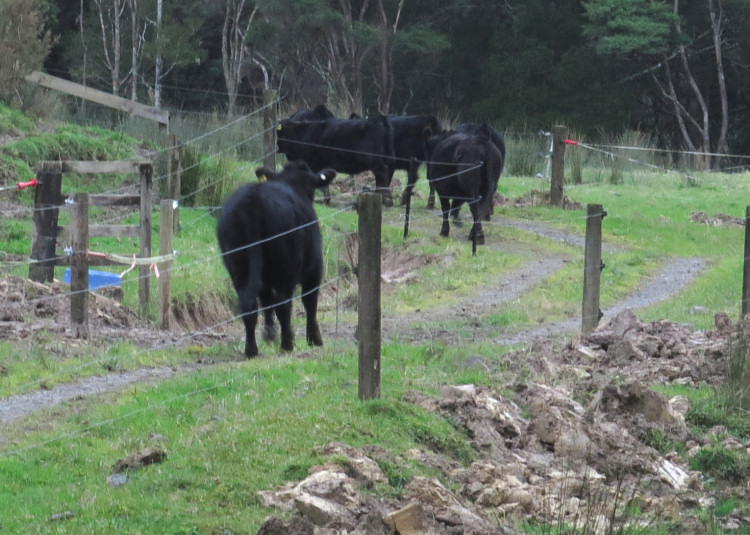 I had called the young mob out to follow me along the lanes and when they didn't do so immediately I went back to find them.  I counted 12 past me and then had to go and get Spot 169, who, like her mother Demelza and several of her sisters, is often away on her own, not sticking with the crowd.  She realised she was alone and ran to catch up with the rest of her mob.

In this picture they were quietly wandering along the track as Spot hurried to rejoin them.

With reports of the rescued Thai soccer boys all over the news, I had an entertaining email exchange with Jude, regarding pictures of people in Thai hospital beds.  Her response was "Recovering from a Caving disaster is somewhat different from having plastic surgery motivated by vanity!" which I thought was a bit on the nose.

Sarah phoned to say they'd all like to come out to the farm for a walk before Karl left to go back to Auckland.  While I was waiting for them to arrive I phoned my mother, Jill, on the telephone in her rest-home room.  Conversations with Jill need to be led by me, or we go around and around in circles, so I was chatting to her about the birds and animals of our household and I think there was a slight, unexpected vocalisation from her end, which made me pause and check she was still listening.  There was no response from her but no sound of any great disturbance either.  I rang the rest-home to ask for someone to go and check she was alright and the nurse found her wandering in the corridor.  Jill does that a lot these days but after a quick, attempted chat with Jill, I stressed that there must have been some sort of event and that she should be watched closely over the next few hours. 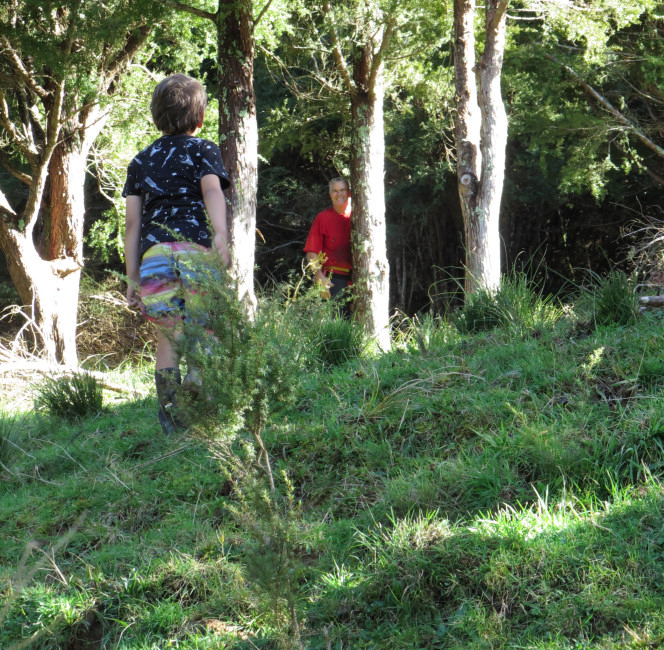 Stephan was out doing some pruning with a young helper in the Middle Back when Sarah, Karl and the children arrived, so we walked out to see them.

Maihi ran up the hill to greet Stephan (after we ensured Stephan had seen us and knew Maihi was there). 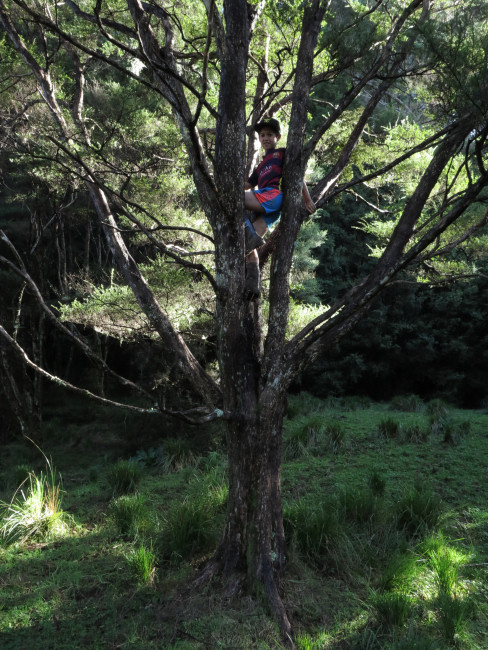 The boys and I went exploring around part of the paddock, Kerehoma deciding this was the Kānuka he would climb. 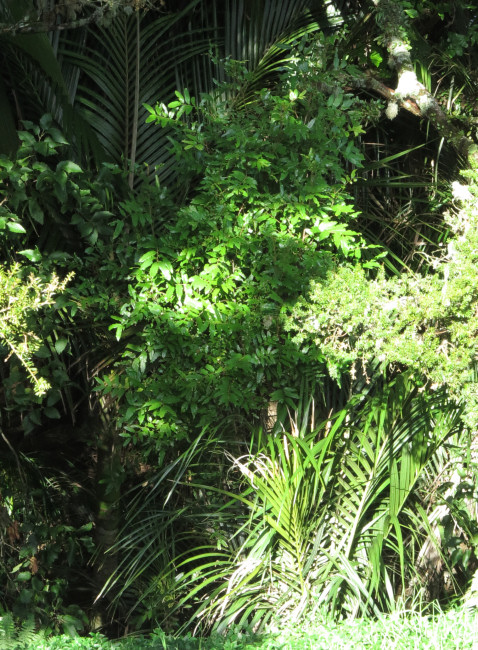 I keep finding more Titoki; this one is on the stream-bank near our house.  They are a very attractive tree.

Back at home I received a phone call from a doctor who had been called to assess Jill and we decided, since Jude was out of Auckland for the night, that it would be best if I could go and be with her overnight, as she'd become more and more agitated over the hours since the afternoon's event.

Karl waited for me to organise myself and then I went with him to Auckland, where he dropped me at the rest-home at 9pm.

The staff kindly provided me with a mattress and bedding to sleep on Jill's floor beside her.  What a noisy place!  It was like sleeping in a hospital - or not sleeping, a lot of the time.  Jill's room is almost in the hospital-care end of the building, so every request for help from the residents rings a ding-dong buzzer, all through the night.  Fortunately I had ear plugs in my bag but also needed to wake whenever Jill did, to stop her getting out of bed in her confusion.  I wasn't sure that she could reliably stand on her own, the staff having reported that she'd fallen three times during the afternoon and evening.  Level of care?  Poor, considering the circumstances.

I had an interesting day observing how different carers dealt with Jill.  There is obviously not universally-good training for dealing with people with dementia.

Jude arrived home in the afternoon and eventually we left Jill to have her dinner and be settled in for the night.  She had calmed down a lot since I first arrived.  I don't think she knew who any of us were though.  The head nurse and I decided that she must have had a stroke that affected the right side of her body, since she'd lost awareness of most of it, had unexplained pain down that side and couldn't see anything out to her right.  (During the evening and night I spent with her, she kept on saying she needed more things as she waved her right hand around.  Eventually I worked out that she didn't want me to pass things, she had some sort of gap in her visual field and that was what she was protesting.)

I stayed at Jude's for the night before catching a mid-morning bus from outside the house to the Britomart train station, then took a train out along the Eastern Line, travelling out around through Orakei.  I hadn't been that way before.

From the airport I flew to Kerikeri, met Stephan and went to my Chiropractic appointment there.

I had a variety of interactions with people today.  I phoned the young neighbours who own the wandering dogs, the animals having been in Jane's garden again while I was away.  I politely raised the issue with the young woman, with whom I've previously had very friendly contact.  The conversation was abruptly concluded when she told me to go and do something explicitly sexual and hung up.  I continue to have an expectation, reasonable I think, that people will deal with each other with at least some civility, particularly when future relationships are inevitable.  That's obviously no longer a given in this community.  I rang the Animal Control people at the Council and handed the problem to them.  This issue has remained unresolved since they moved in at the end of November last year; we have spent enough time trying to resolve it in a cooperative manner.  Young Miss can swear at the authorities instead if she dares.

Our afternoon's visitors were Jill and Grant, come to see our little bulls and to decide which of them they'd like to buy.  When I inseminated all of the pedigree cows in the summer of 2016/17, I knew any of them might be the bull Jill would buy.  Her choice was, as I suspected it might be, the son of Henrietta 141, the result of an insemination on the 20th of January 2017 and the only bull calf born to that sire.

Jill will arrange the trucking and little bull will go off to his new home in the next week or so.  I don't sell many bulls because that's not why I breed my lovely cattle.  It's nice if I can sell one to someone who asks for one but I loathe the prospect of marketing and we'd have to have a much larger herd to have a significant number of bulls to sell. 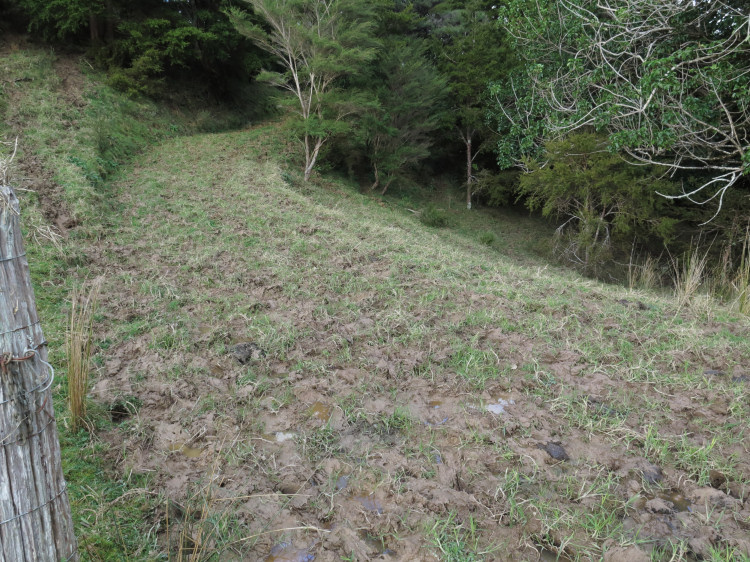 Out to check the cattle this afternoon, I climbed up the Middle Back to open the gate from the Big Back North: there's no food there!  But also no cows to be seen.  I called them, hoping they'd hear and understand there was reason to come up the hill again today. 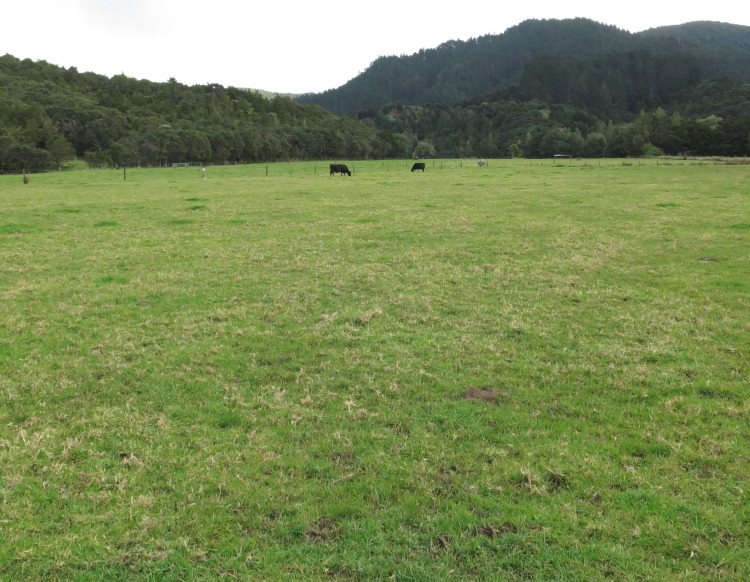 Down on the flats things are pretty bare too: winter normal.

Zella and Demelza are in Flat 2, on a big enough area to feed them while there's not much grass growth.

I sold half a dozen budgies this morning, the first such sales for a long time.  A woman who also breeds them over near Kaeo, had rung the pet shop where mine used to be sold and they'd passed on my number.  I had to do some budgie sorting yesterday afternoon, to ensure I presented the youngsters and those I knew to be sound birds - and so I didn't accidentally sell any I really wanted to keep.  I applied a few leg bands before putting all those I'm keeping in one side of the aviary and the potential sale birds in the other.  When I later sorted them back into their sex groups, I discovered I had 26 males in that half of the flight.  Ridiculous.  I still like keeping them though, they're lovely to interact with. 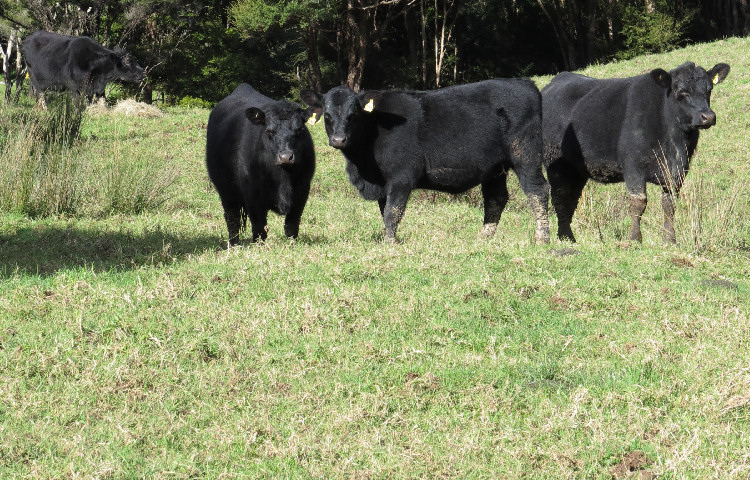 The young mob are in the Spring paddock, where I took them some hay this afternoon.

In the picture Imogen 155 is at the rear, getting into the hay with enthusiasm, while Fancy 166 stands with Ellie 171 and 811 (Jet's first daughter).

The three heifers appear the same size in the photo but Fancy is pregnant and 21 months old, 811 is the same age and not in calf and in the middle, Ellie 171 is only nine months old. 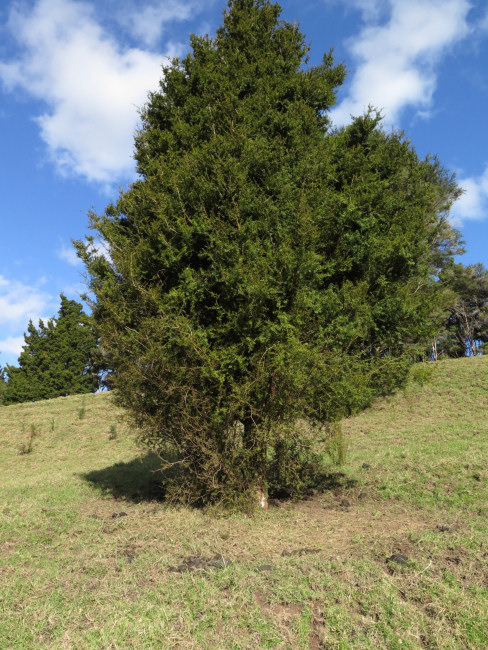 I had to walk over into the basin beyond the first heifers to find the rest of the mob.  The ground beneath this Totara is dry and obviously oft-used as a sheltered sleeping or resting place, evidenced by the bare soil and cow-pats.  Under thickly-grown Totara like this, one can remain entirely dry even in heavy rain.

I carried on over the ridge and down in to the Middle Back, where I found no cows.  They were still down the bottom of the Big Back paddocks, sitting around on muddy ground, all contentedly chewing their cud in the warm sunshine.  They will eventually go to the Middle Back, in their own good time. 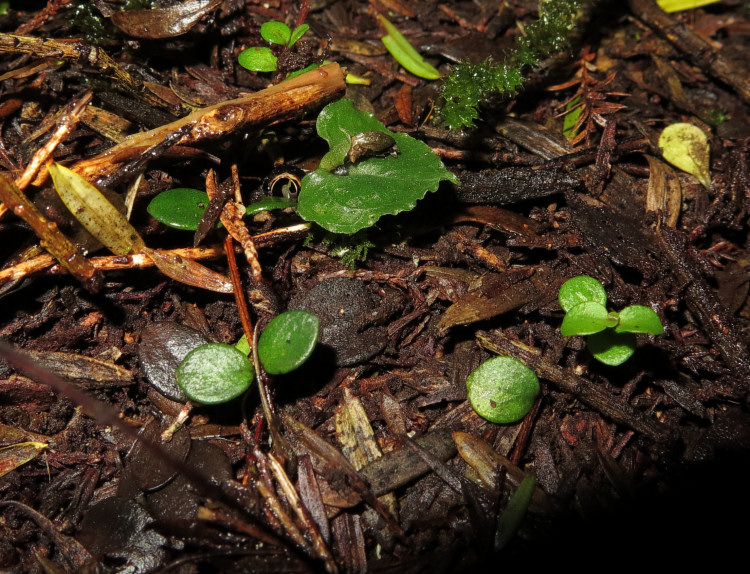 So as not to make the cows think I was there to take them out the bottom gates, I climbed through the fence into the Bush Flat reserve and went orchid hunting in the bush.

I first found this senescent Corybas cheesemanii in the area I've found the plants in other years. 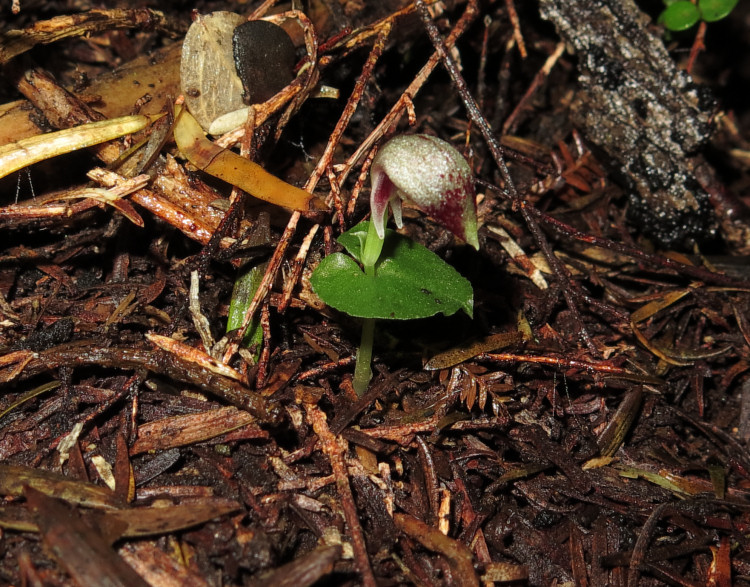 Then a few still in flower.

There aren't very many of them and they're very small, easy to miss.  Most of the dead leaves around them are Totara and they're only about 1cm long. 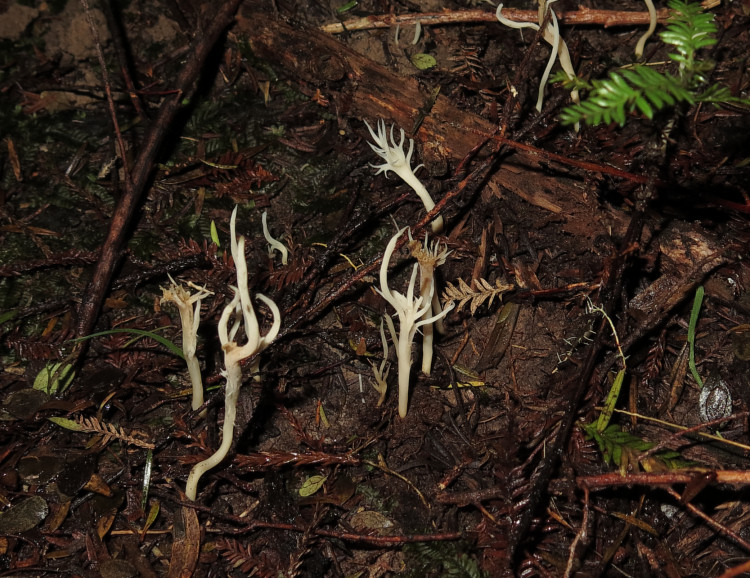 I always enjoy finding Coral fungi, so delicate, so beautiful, so many different colours. 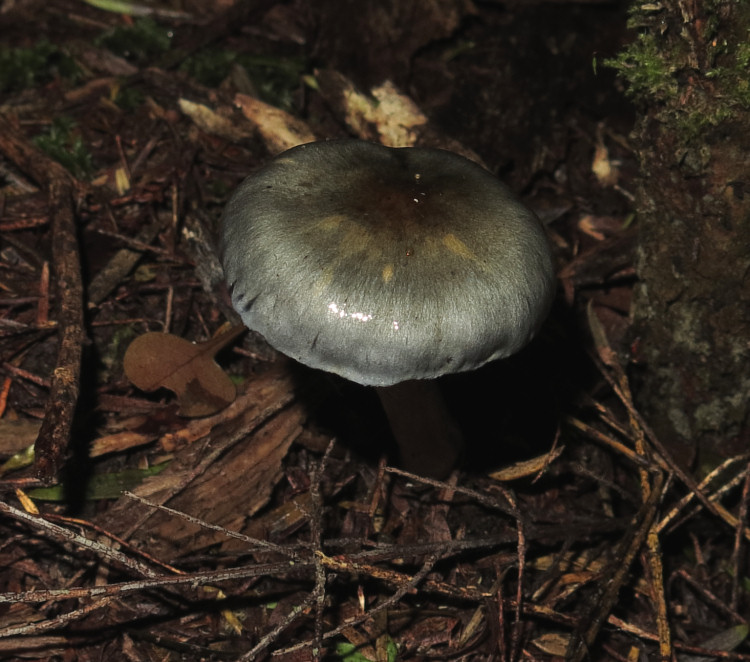 This little toadstool was much bluer than it appears with the camera's flash.  As I bent down amongst the surrounding trees, I must have caught a small Totara sapling's branch on my sleeve, so that when it let go, it flicked up into my left eye.  Totara leaves cause extremely painful eye events at the best of times but as my left eye has remained sensitive since my eye surgery over two years ago, it was particularly horrid.

If a woman swears in the forest and there's nobody there to hear, has she made a sound? 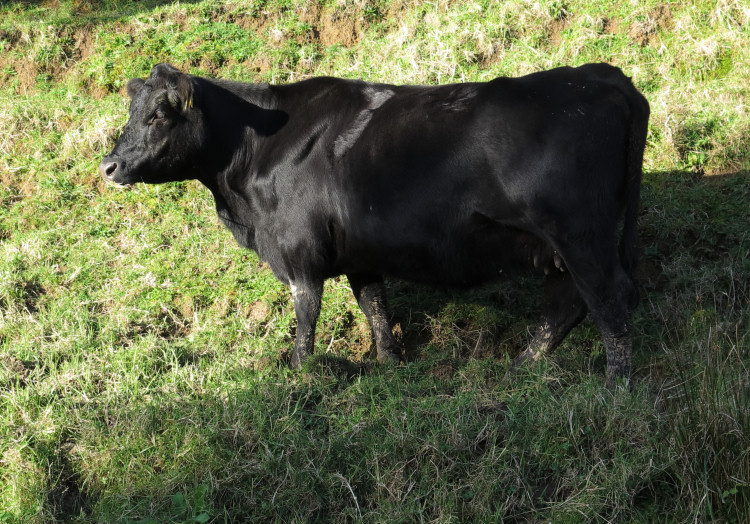 After a cuppa and a sit-down, I went Over the Road to check on the thin cow mob.

Jet 777 looks really good sometimes.  She should, being of the grey family, but she had that terribly thin stage as a yearling.  Now as she approaches her fourth birthday, she's starting to show what sort of cow she might be when mature.