At this time of year one feels one must tidy one's house, in anticipation of visitors.

Fortunately every time we go to the effort, it makes it a little bit easier for the next time, since tidying often means creating some new permanent space for stuff.  Or getting rid of some stuff.  I decided recently that I will take things whose history I can no longer remember or do not know, to the Hospice shop for fund-raising sale.  There is a lot of Jill's stuff still in our house and things she'd acquired in recent years have no meaning to me and she can't tell any of us what those things meant to her, so the things might as well become part of someone else's memories.

I went out the back to check the Spring mob and got caught in a very heavy shower, during which I stood under the thickest Totara I could get to in a hurry, for the twenty minutes or so that it fell.  Totara are very good shelter, but as the rain continued, drips began to fall through the foliage and eventually the rain lightened enough for me to consider I would be less wet in the remaining drizzle than under the tree. 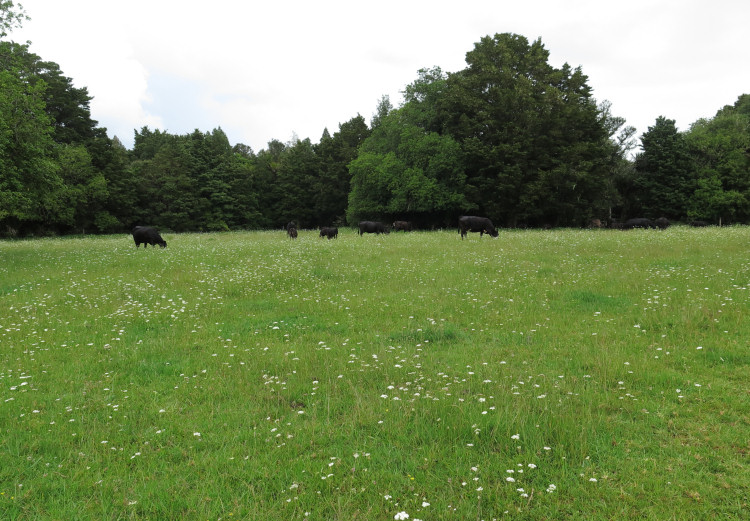 The flats paddocks are growing so quickly and, with all the rain, will continue to do so.  If they're not grazed within the next few days (instead of saving them for a couple of weeks and the start of mating) the pasture will lose a lot of its goodness, particularly because the Parsley Dropwort flowers will go beyond palatability.  The larger of the cow/calf mobs is therefore now making their way around the flats.

We had a gathering for our te reo class this afternoon, which ended up being a very small event, with only two outside attendees.  No matter, it's a busy time of year and we can do it again another time.

Gaye and Brian came round to dinner at our rather late invitation, when we realised how much of yesterday's pre-prepared food we needed to get through. 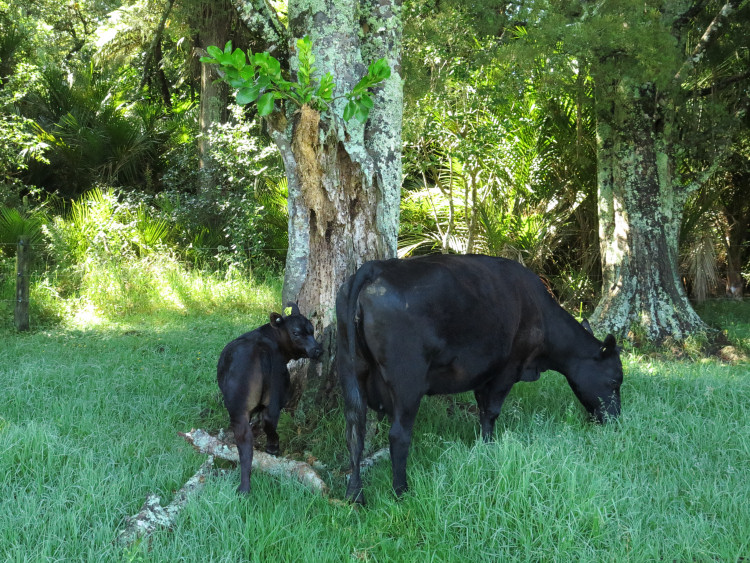 After moving the 15-pair mob into the bottom of Flat 2 I noticed these two together, a pairing I've been fooled by before.  This affinity is why calf 186 ended up with that tag and not the 191 I had planned for her, her companion here being Fancy 126, not her mother, Ellie 119. 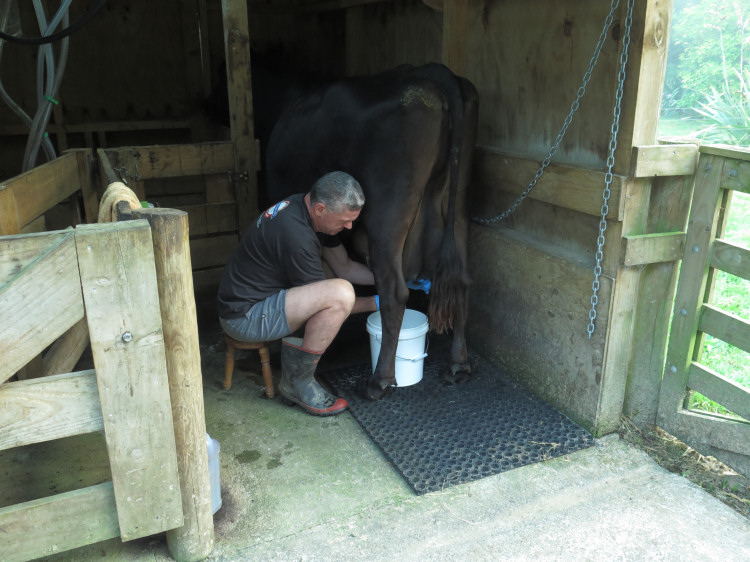 Bernie is back for another holiday.  He arrived on yesterday's evening plane and was up with us at six to milk Zella this morning.

Stephan took the opportunity to get out in the still, early air, to continue his spraying programme before he goes away for a couple of days tomorrow. 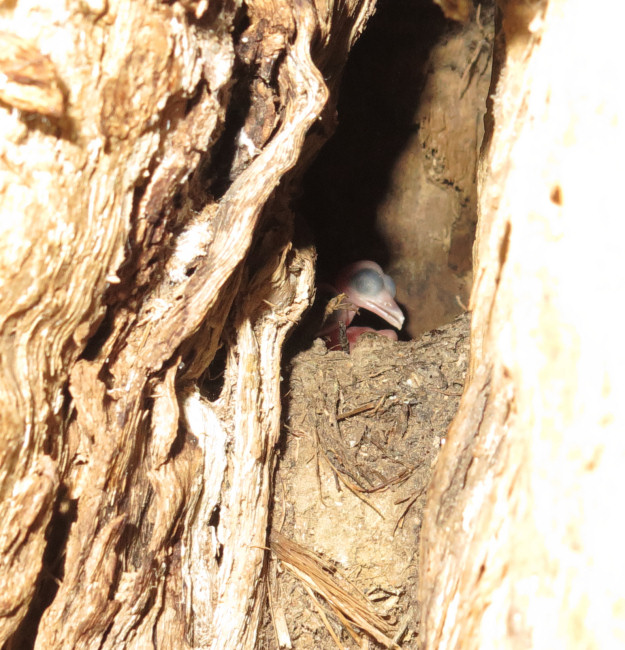 I have been carefully observing last year's Kotare nest in the Puriri tree, just above my maximum/minimum thermometer, waiting to see if the birds would use the same hole again.  Having noticed one of the birds flying out of the tree from higher up whenever I came out the back door, I'd assumed they were nesting in another hole.

Then last Thursday I saw a bird flying out from the hole and have seen it sitting in there since Friday.  I presumed nesting had just begun; but now there's a chick!  The female bird has been in there, secretly, for the last three weeks, incubating her eggs out of sight.  I've never dared put my hand into the hole to discover its shape but now think that most of the cavity is in to the left and it is only since the chicks have hatched that the mother bird has become visible, perhaps standing off the chicks to feed and protect them. 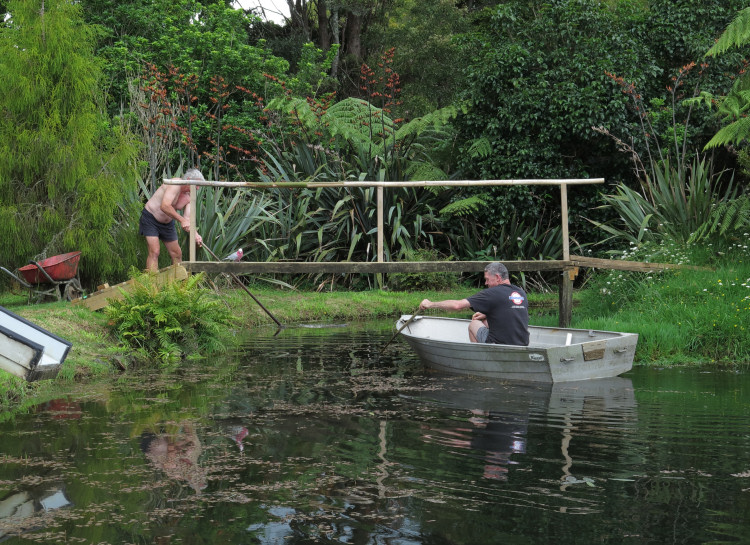 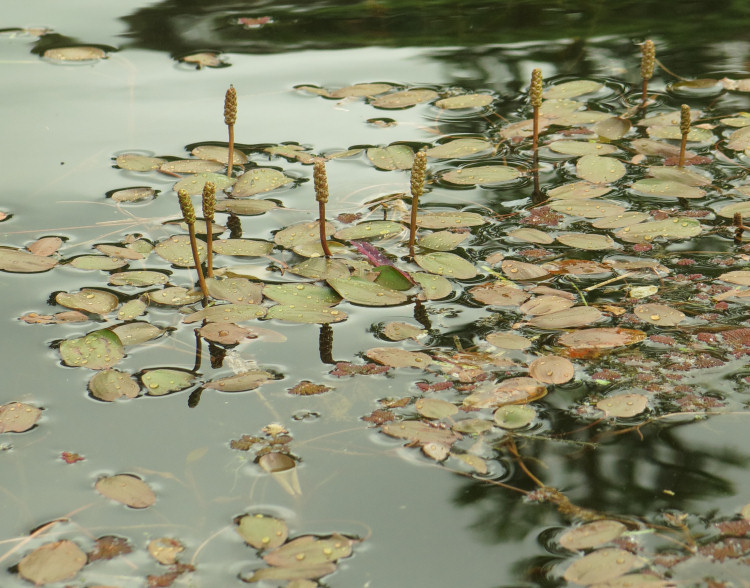 Potamogeton cheesemanii and its flowers.

There's quite a lot of weed again this year.  The pond was much clearer last summer after the work of so many determined weeders the season before.

While Bernie milked Zella, I took Stephan to the airport to begin his journey to Tauranga.  A long-time friend is dying and after an email the other day with the sad news, and a telephone call to follow, I booked tickets for Stephan to go down for a couple of nights to say goodbye and to provide a bit of practical and emotional support.  Bernie's trip timing is perfect, as our relief cow milker! 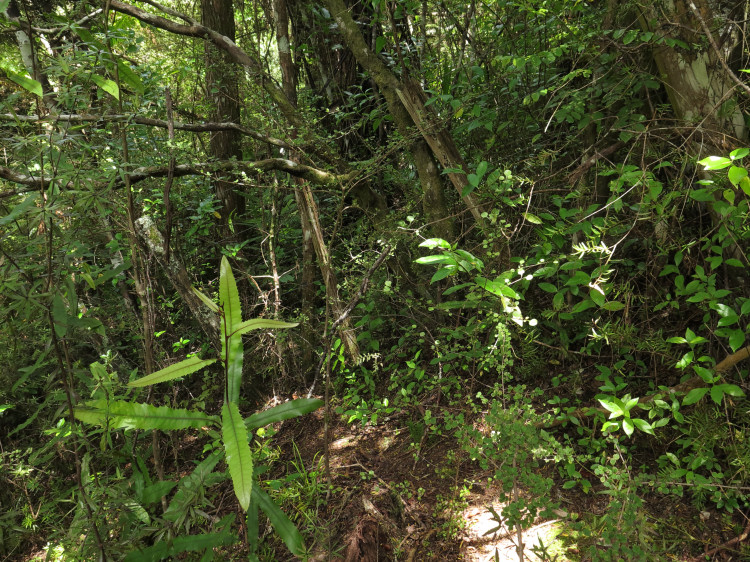 Bernie and I went out for a bush walk, first through our Bush Block for 340 meandering metres to the boundary fence (it is here in this picture) and then over that and into the Buselich Reserve. 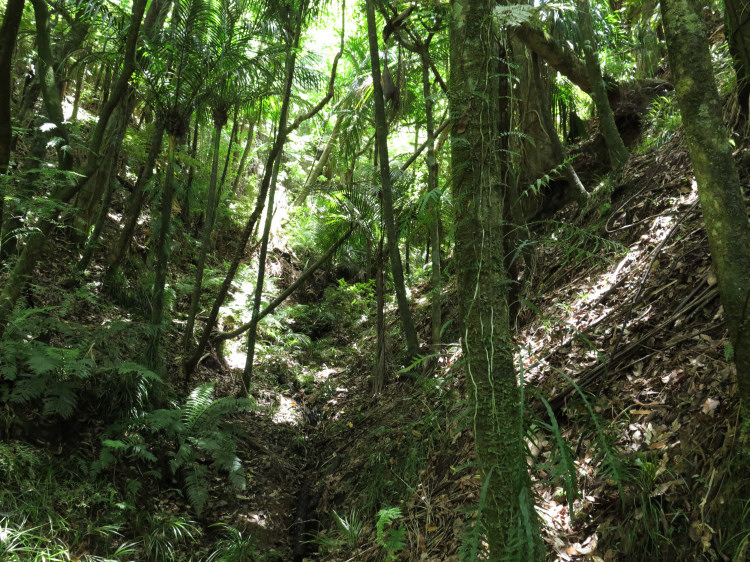 We soon encountered the steep sides of a gully and carefully made our way down into it.  And up the other side.
(We came from the right in this picture.) 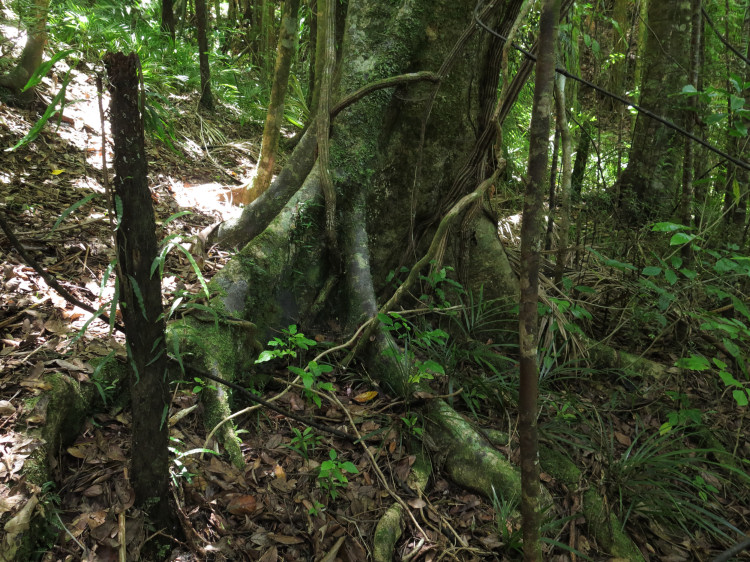 There are huge trees in the reserve and I particularly wanted to try and find the ones I can see on the skyline from home.

This is a Pukatea that is presumably big enough to be seen in the canopy.  I could see many large Pukatea very clearly from the hillside on the other side of the road when we were visiting there but they're less obvious when I sit here writing and look over at the bush.  It all depends on the angle of the sunshine. 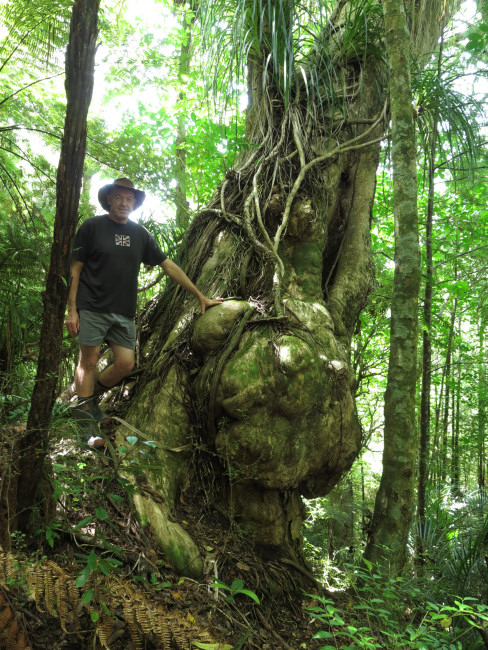 I marked the position of this Puriri on the GPS: it is the distinctive tree our neighbours up the road can see from their house. 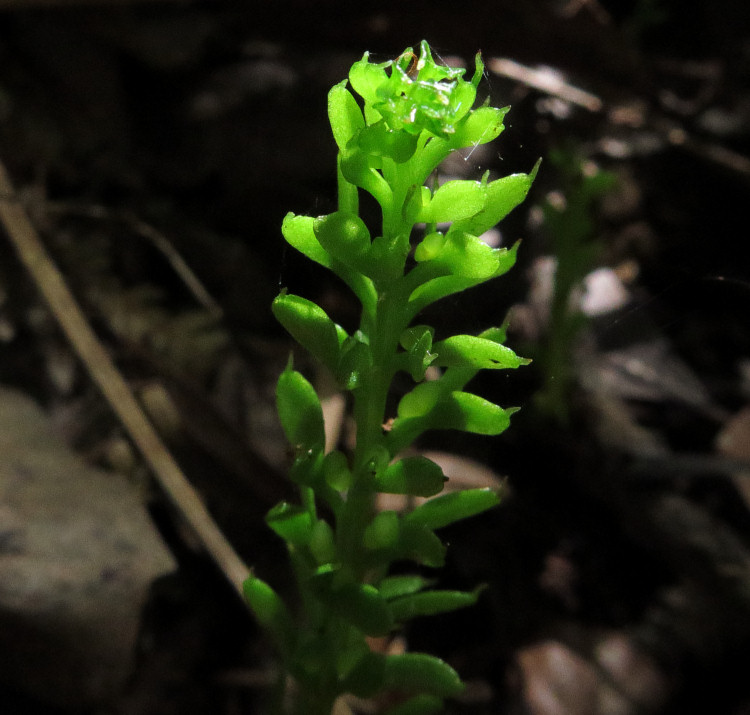 I had forgotten to take any glasses to look at small things, so had to hope some of my close photography would be sufficiently well focussed for examination later.

These strange plants were growing directly out of a lot of deep Taraire leaf litter on a steep slope.  A post to the iNaturalist website identified it as Tmesipteris tannensis, a chain fern, usually epiphytic but sometimes growing from the ground. 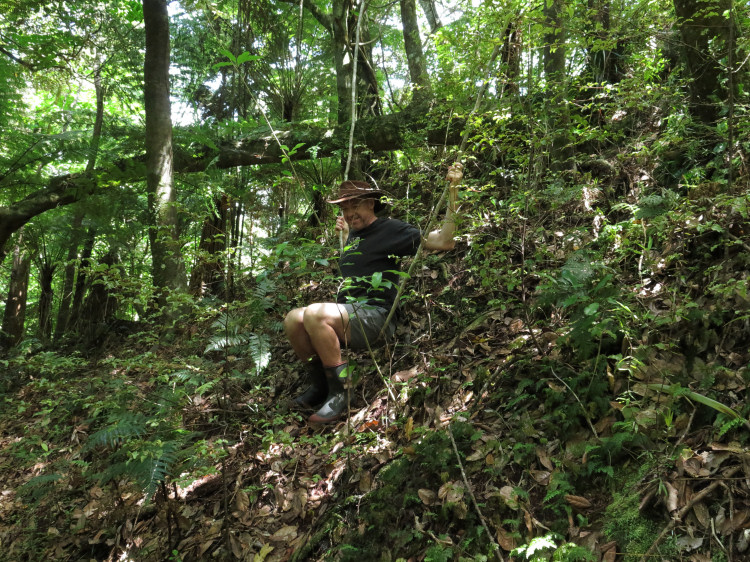 I turned from my close photography to find Bernie sitting in a swing: a supplejack vine. 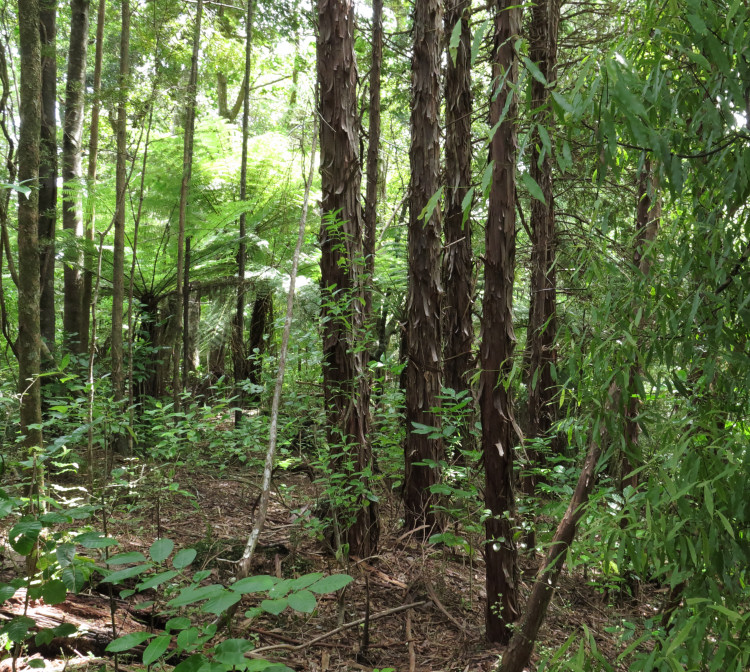 At the top of the hill we found these fabulous trees, a species I've never seen before. 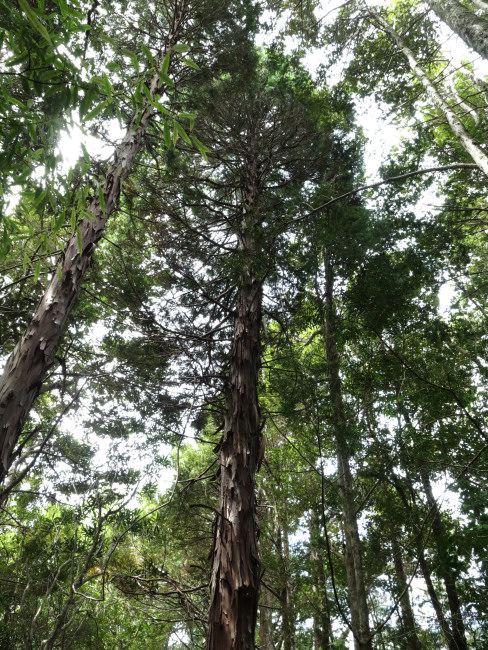 They are Kawaka, Libocedrus plumosa, an indigenous member of the cedar family. 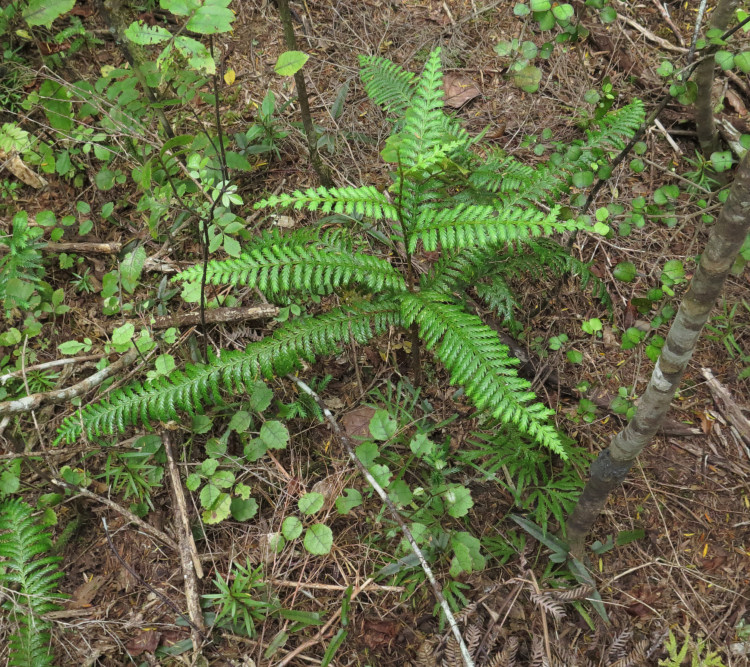 I had seen a few small seedlings like this as we reached the top of the slope but had not noticed that they were not just another fern: this is a juvenile Kawaka. 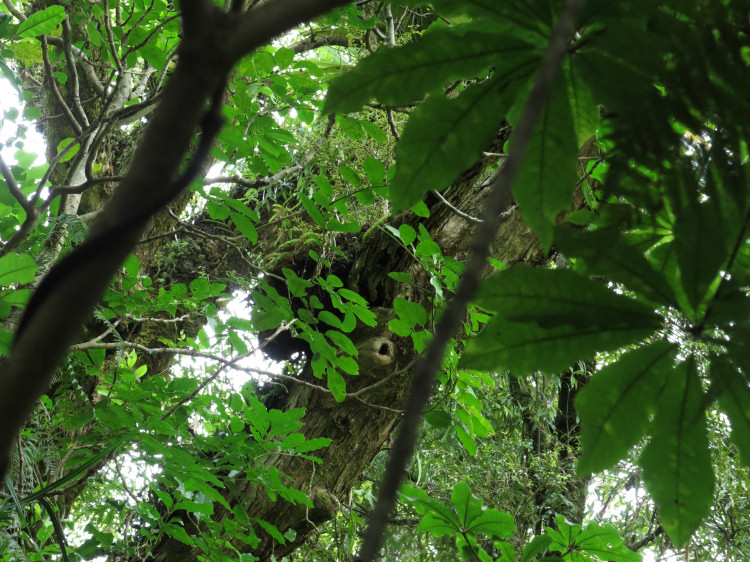 Bernie spotted what he thought were bees, going in and out of the hole in this Puriri branch, high above us on the slope as we headed homewards.

I think wasps more likely, since most of the wild bee colonies have been wiped out by Varroa mites.  Whatever they were, I was quite happy they were far enough away to make identification difficult. 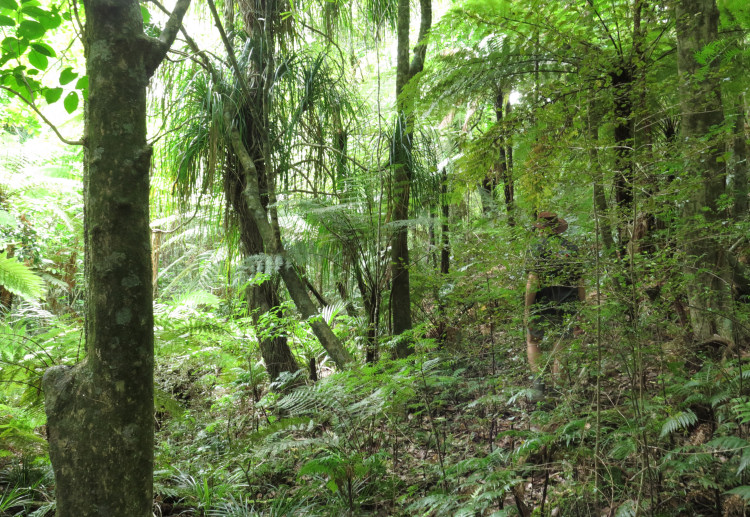 I am very much enjoying our walks through this bush.  It is a real treasure, just over our boundary fence. 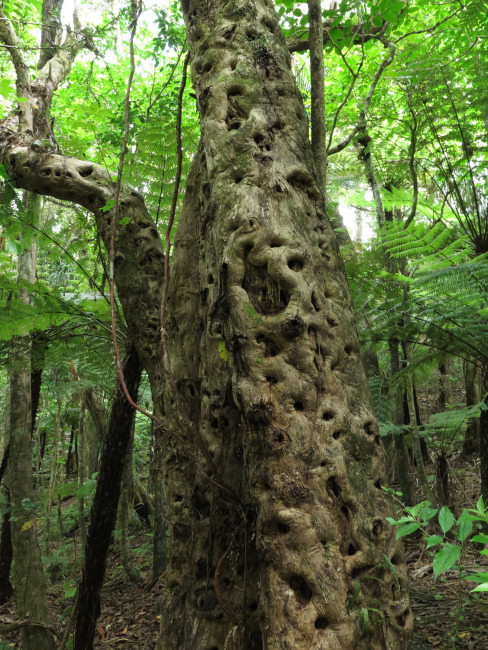 This is a Puriri tree, obviously one found irresistibly delicious by Puriri caterpillars!  I've seen occasional trees with a similar concentration of moth holes but never quite the same response by the tree.  The healing growth around each hole is much, much thicker than I've seen in other places.

Ten minutes later we emerged into our Big Back South paddock, having walked 2.9 km through the reserve. 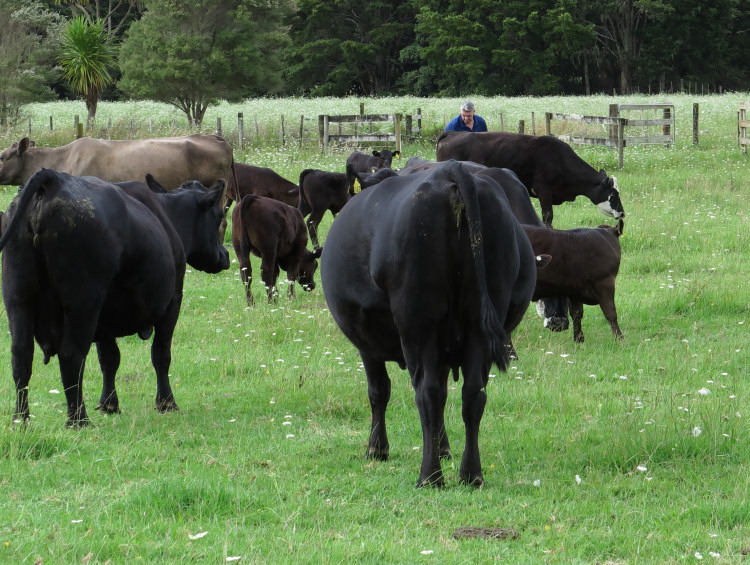 Bernie leaves first thing tomorrow morning, so he and I walked out with grooming brushes and spent some time amongst the cows this evening. 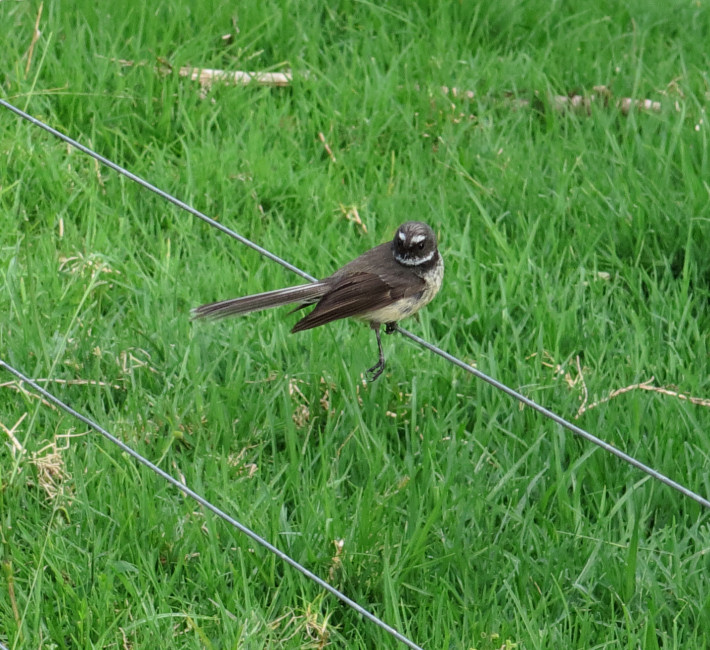 When we were bringing the two calves in for the night, a family of Pīwakawaka, Fantails, were flying back and forth across the small area.

This adult bird has an injured leg it could not use. 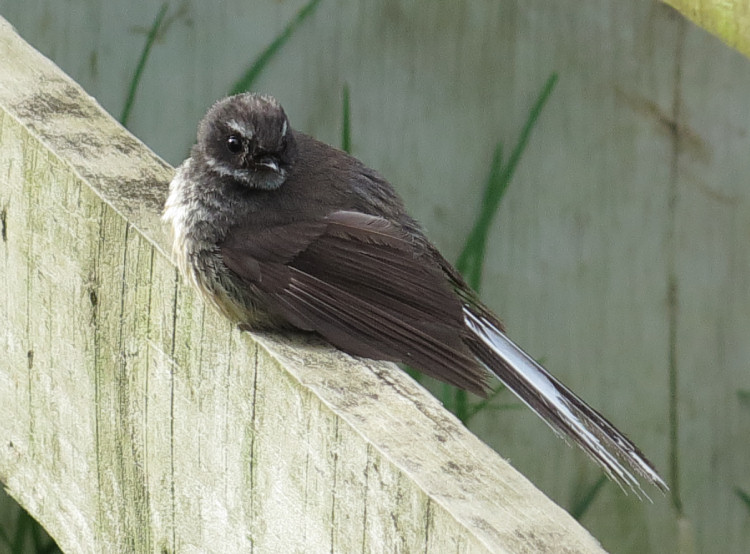 One of the chicks.  In life it was obvious which were the chicks and which the parents both from their behaviour and the slightly different colouring of the youngsters. 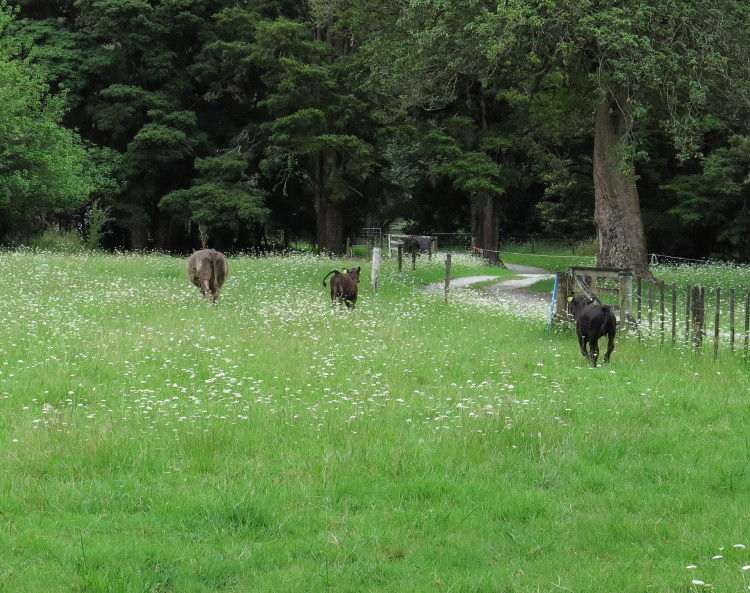 We rose early and Bernie milked Zella before we went up to the airport for him to go on his way to his family in Whanganui.

I'd put the housecows in the Pig paddock for the day so they'd be easy to get out in the evening, which they proved to be. 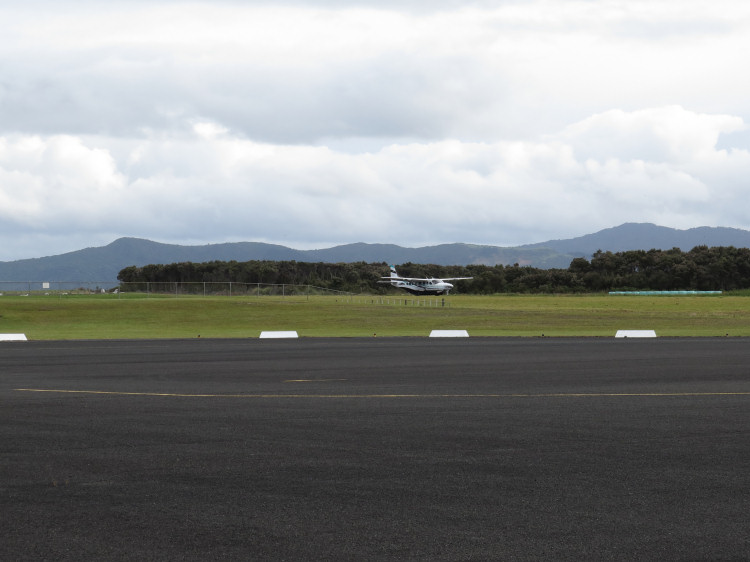 Stephan's plane was nicely on time and I arrived just as it was coming in.

In the distance, the highest peak on the right of the photo is Taumatamahoe, which we climbed earlier in the year; the highest on the left is Puketutu, the hill from which our water springs. 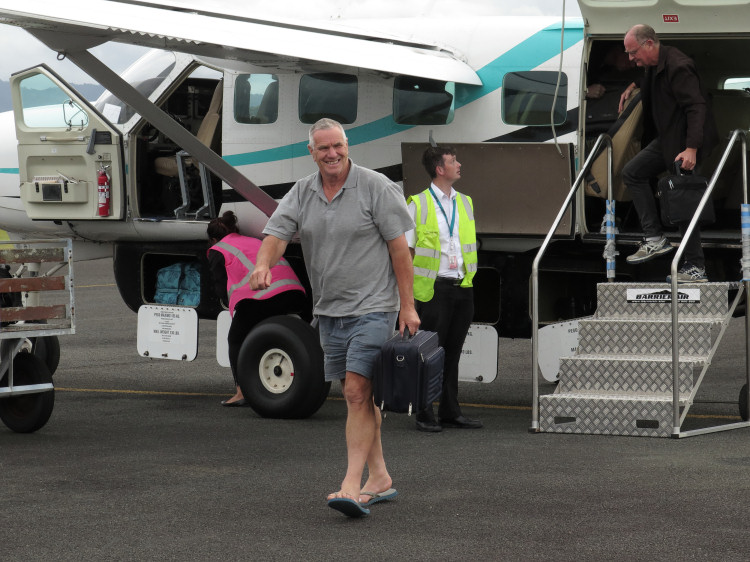 Stephan, pleased to be home again.

His visit was all we'd hoped it could be.  He took a frozen roast beef with him and did dinner on one of the evenings, helped move furniture as things needed to be changed around in the house of our friends with the introduction of a hospital bed, and spent many hours talking.  I'm so glad he was able to go.

His attire is formal travel-wear.