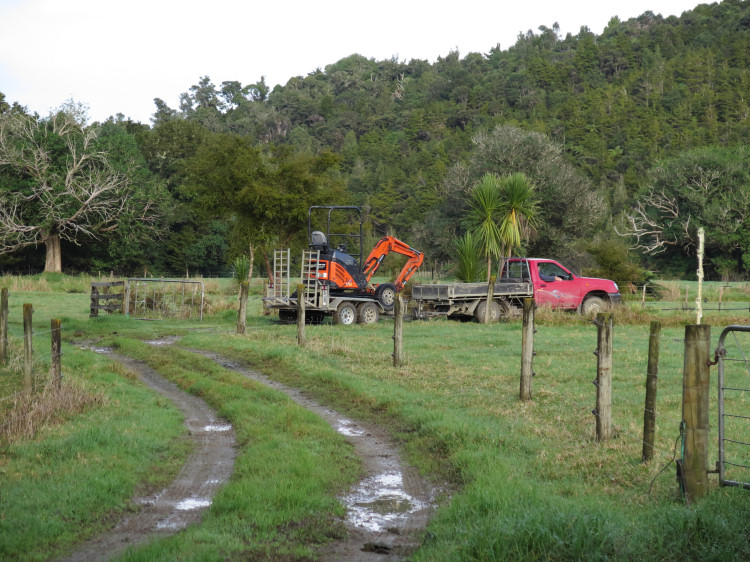 We hired a 1.7T digger for a few days: there is much drain-digging and clearing we have in mind.  We know it might be more efficient to hire an expert on a larger machine, but we anticipate having a great deal of fun and putting the drains where we want them, not where someone else thinks we ought to put them, which happened last time and didn't work very well. 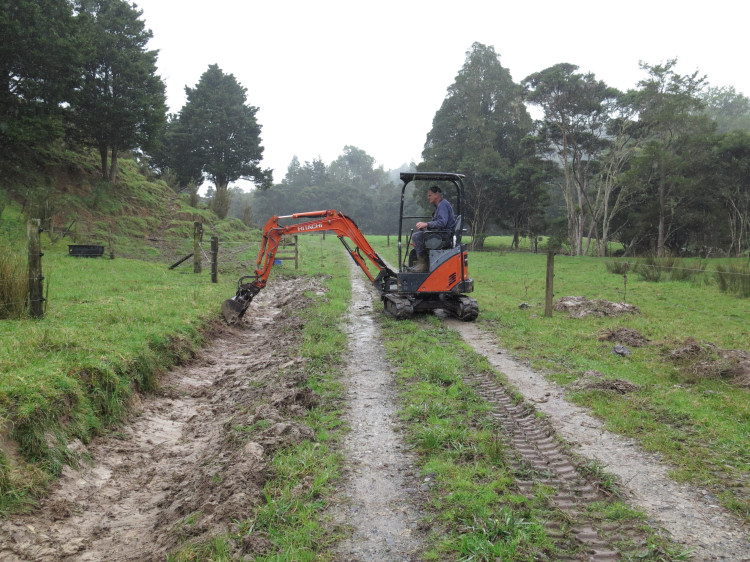 Decades ago Stephan worked on a digger during the development of one of the subdivisions in Kaitaia, so it didn't take him too long to get the hang of this little machine.

Our primary aim is to deal with the huge amount of rainfall that runs down off the central hill and, until now, across the tracks onto the adjacent paddocks, making them horribly boggy in winter. 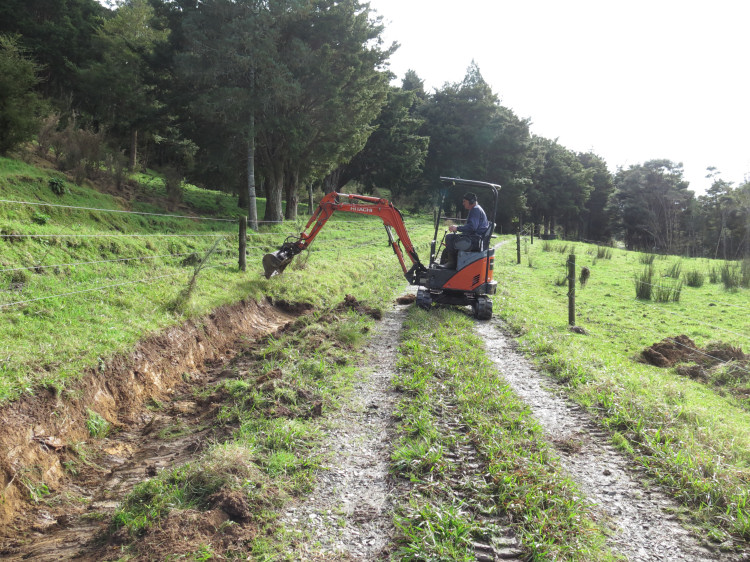 There was a shallow ditch along this side of the track, but it wasn't deep enough to prevent the water escaping onto the track where the slope was more than its depth.

I hope this will address the Frog paddock's wetness beside the track and down around the gateway.

I had a go on the machine for a while when I relieved Stephan to go home for some lunch.  It was easy to operate, but would take a few hours' practice for the lever operation to become automatic and smooth, for the arm and bucket to become effective extensions of one's own body. 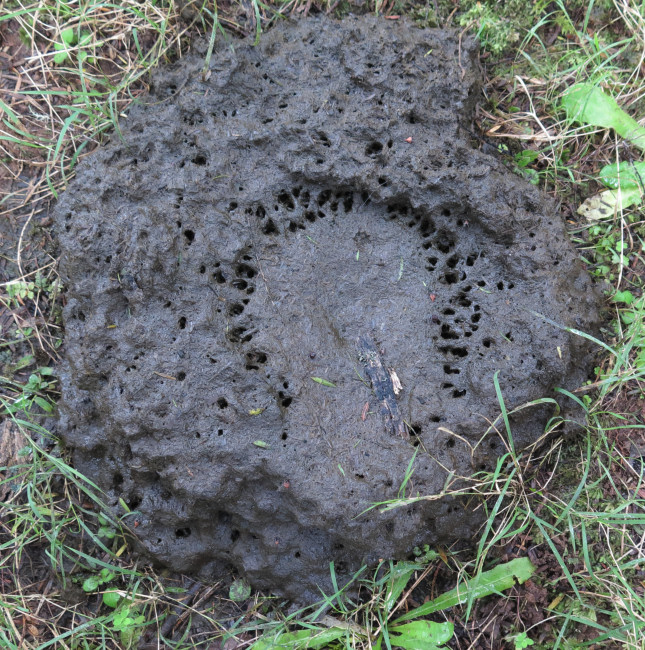 Stephan carried on digging and I went past him and out to see the cows in the Spring.

I couldn't see what might have caused this interesting pattern in a cowpat under some trees.  Was it raindrops falling from a branch above, or a colony of somethings emerging from underneath? 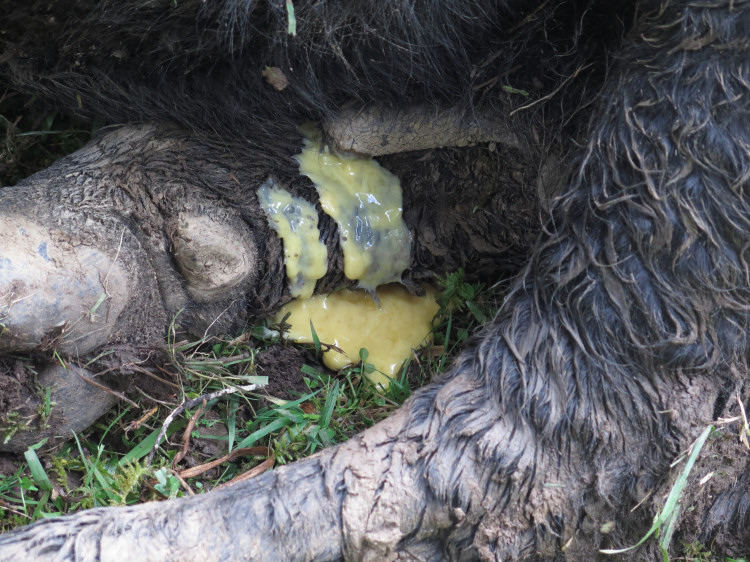 Eurck!  Things you wouldn't see if you didn't look.  This is 613's previously-mastitic quarter, expelling pus as she lay in such a way that pressure was applied to the quarter, or the teat itself.  I gently squeezed a small amount more out and there was no more when I checked again two days later, so perhaps this is the end of the infection process when the body is left to heal itself.

Beef cows probably have mastitis more than is commonly noticed.  Any effect on milk production will be noted in the growth-rate or size of the next calf.  In the case of the older cows, their udders probably accumulate scar tissue over time, reducing their milk-producing capability but at the same time, as they age, they produce a bit more every year, so the damage-related reduction isn't noticeable.  613 raised one of the biggest calves last season. 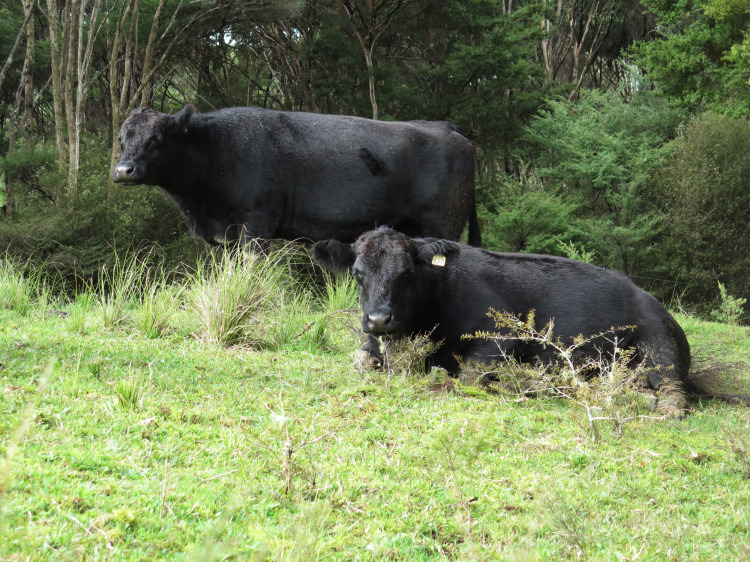 Meg standing behind Gem, at the end of the little area above the stream. 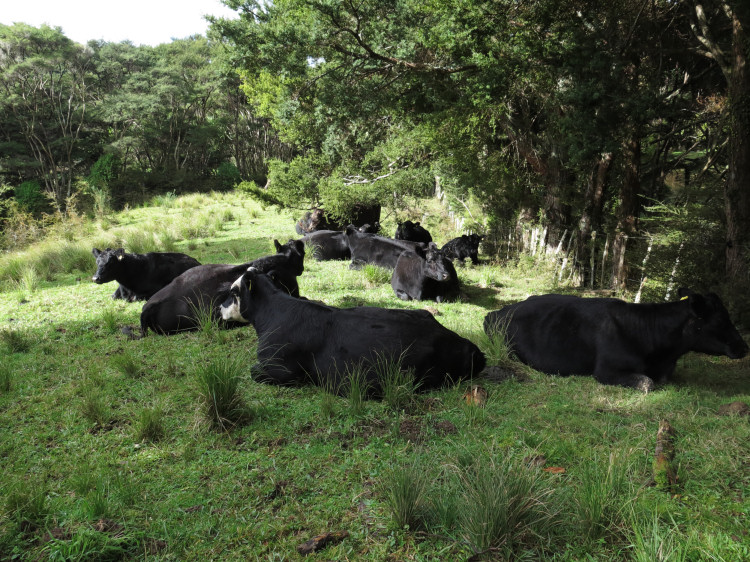 Nearly all of them were sitting - Meg and Gem are beyond this group, 613 the last sitting body visible and, behind me, were white-faced mother and daughter 746 and 788, sitting closely together.  I don't notice Emergency and daughter Genie 150 sitting together much.  I'm trying to pay more attention to these preferences. 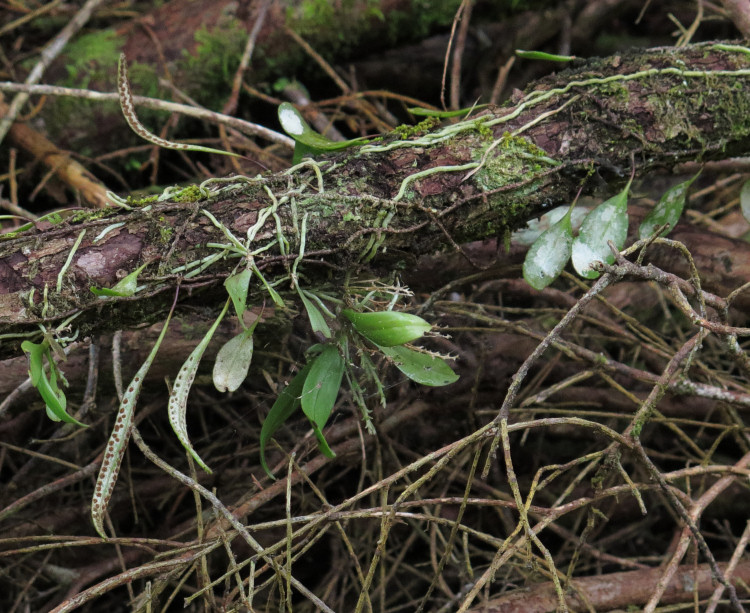 The fleshy tree orchid, Drymoanthus adversus, is easy to spot when it has grown many light-coloured roots along a branch.  These ones were on a branch on a pile of prunings on the streambank.  I don't know how long they might survive on a dead branch, but there are flower buds forming here, so they're happy enough at present. 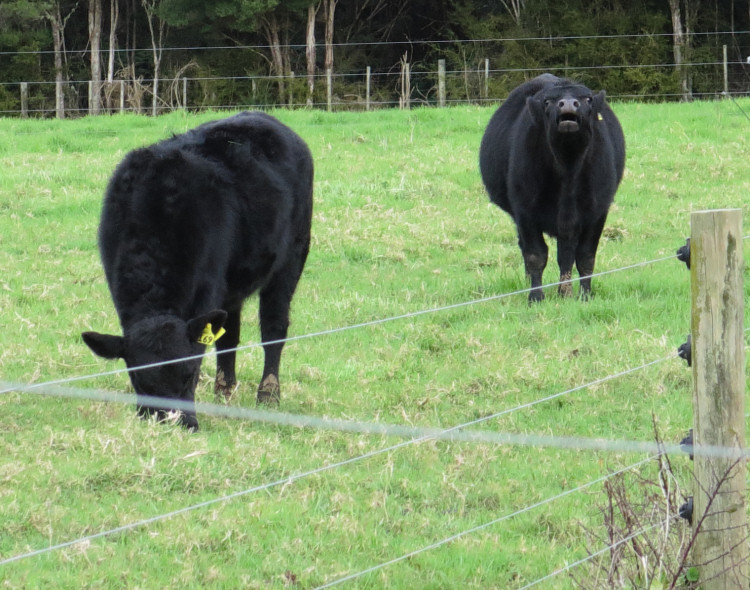 From early this morning Zoom bellowed, as she started coming on heat again.

The three little bulls on this side of the fence seemed to be taking no notice at all. 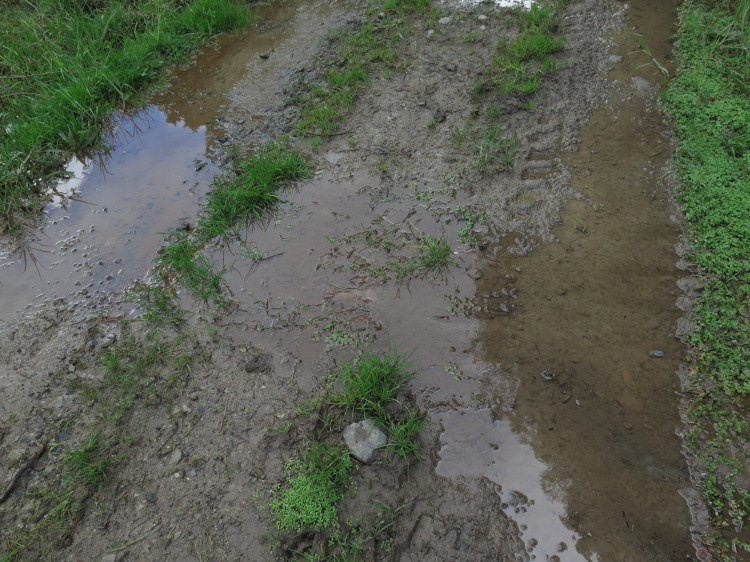 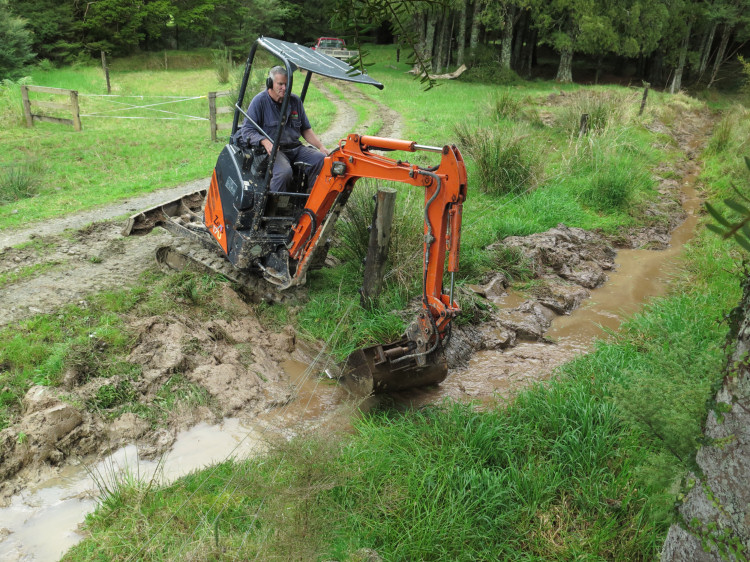 And so Stephan applied the digger, starting at the low end, had to do some heavy shovel work in the middle because the sodden ground was too wet for the digger and it would have sunk and been stuck; then came along to this end to finish the job.

We will need to do a bit more digging along here at some stage, when we can get a digger in without it sinking into the soft ground. 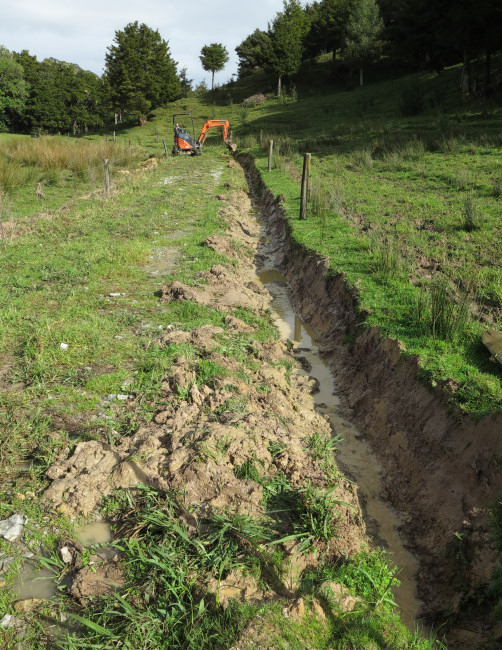 Stephan carried on today having fun on the digger, while I worked in the office, earning enough to keep him in the manner to which he is obviously very much accustomed.

This drain alongside the Bush Flat lane, has been working reasonably well in providing a firm track to access this side of the farm during winter but with the tractor alone, Stephan hadn't been able to form it sufficiently further along.

I spent quite some time this week communicating by phone and email with representatives of the meat company to which I'd sent the cattle last week.  Mr Big 87 had gone through the system with a reported very light weight, one of the other two bulls went through without his NAIT tag being read and the information I received was as usual minimal and confusing.  Eventually it was all sorted out, although I'm still surprised at the light weight of the big bull.  The works apparently cut out just over 50kg of muscle on his injured side with a health report of "arthritis"; that made him appear as a very light carcase on the killsheet.

When I supplied the NAIT tag number of the other bull, the works eventually credited me an extra payment for both the no-NAIT-tag penalty and a per-kg market access premium they'd initially docked because he didn't have a tag.  He certainly had a tag when he went off on the truck. 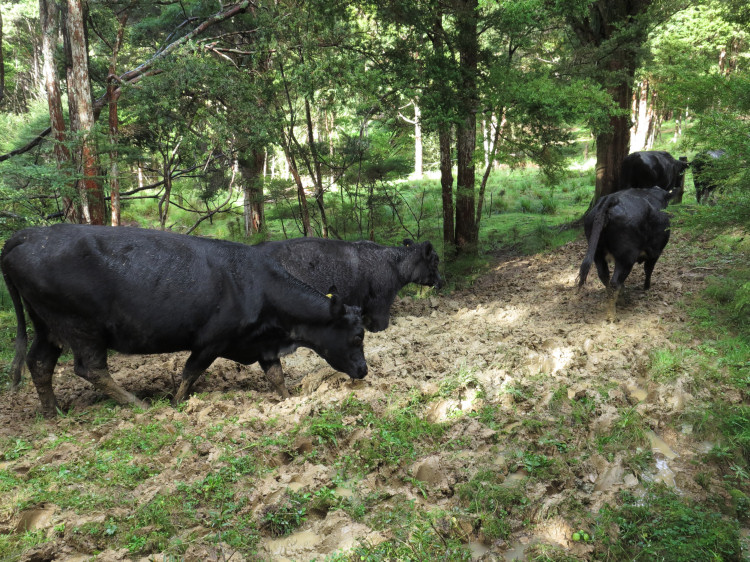 The boggy mess over the Spring culvert to the Middle Back gateway.

Ground conditions are too wet to bring the digger all the way in here but sometime in the summer, when the soils are dry, we might bring a digger along Route 356 and sort out this culvert and the water flow that makes it so boggy.

The cows really dislike going through here but they're very brave and cooperative and they know there's something better on the other side.  While this is a terrible muddy mess, the water flowing through the tyre-culvert beneath remains clean.  The problem is primarily caused by a lack of channelling on this side of the culvert, where rainwater pools in a low point.  With a digger we would hope to cause it to flow down to the water-course, rather than onto the top of the track over the culvert. 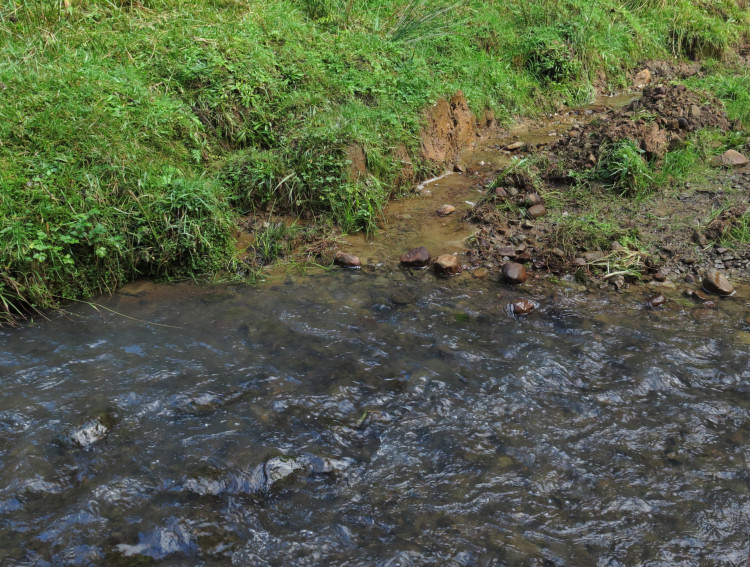 On Sunday this little channel was running brown, as Stephan cleared the drain along the bottom of the Pines.  It looked appalling but we know such transgressions are viewed without concern by the local environmental authority and the muddy water was joining this stream where the neighbours continue to foul it upstream anyway.  At least our water, now running clear again, will remain so because we will exclude the cattle from the cleared drains next time they're in the Pines paddock.  Eventually they'll be kept out of the wet area altogether, as part of our wider waterway-protection work. 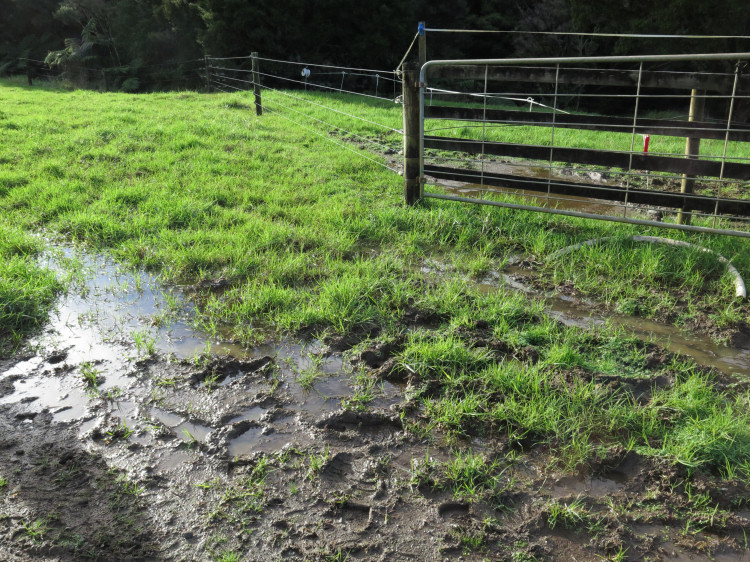 Here on the right is the House paddock, where I had just erected an electric tape to exclude the cattle from where Stephan is about to dig a drain.  We want to see if taking water along there will address this very wet problem of water pooling in this area.

The whole of the flats slope very gently in this direction and while a lot of water ends up in the drain behind me on the other side of the main track, some of the gradual flow ends up on this side with nowhere to go.  As we're about to build the new yards in this area, we need to address this wet problem. 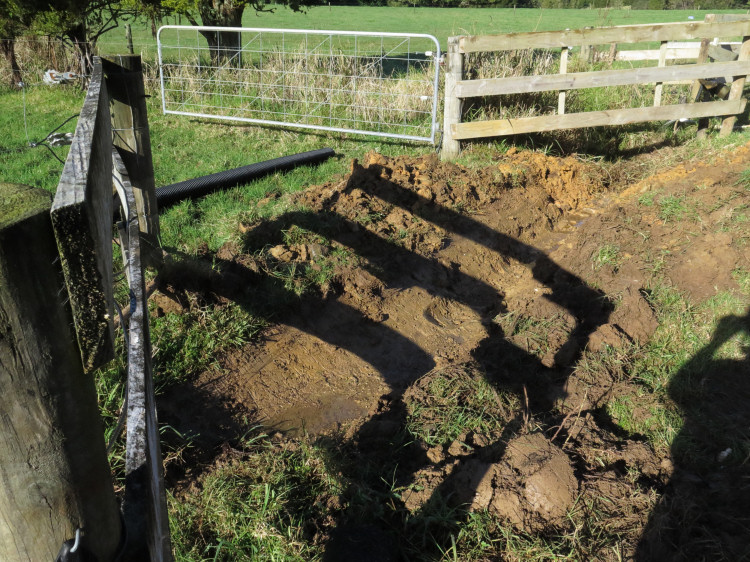 Another problematic wet area occurs in this top gateway to Flat 1.  Before we put the gate in here (it's hard to remember when there wasn't one) a shallow drain took water along here to the main drain but as it never seemed to carry much water, we probably didn't worry about it when we flattened the access to the gateway.  But the gateway is now always very boggy in winter, so we will reinstate the small drain from the left and take the water under the gateway by culvert pipe and see how that improves the situation.

We make this stuff up as we go along, hope it works... 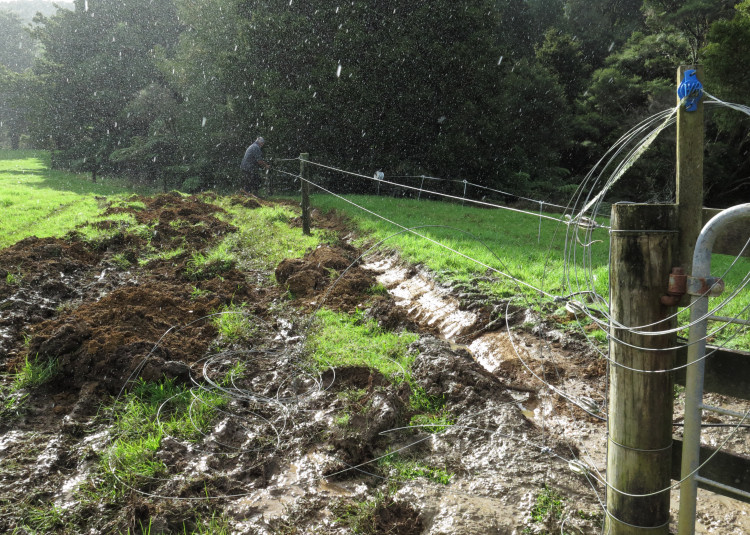 Electric fencing is easy (compared to conventional, at least) to dismantle and replace when necessary, in this case to allow this new drain to be dug from the easiest position.

Rain has continued to fall during our digging week but that has been quite helpful: if there's water running, it's easy to see which way to dig to carry it away.

And that was the end of the digger work for the time being.  Stephan spent an hour or so water-blasting it clean of as much mud as he could and loaded it back on to its trailer ready to go to town in the morning.  We ended up paying for 28 machine-hours for our week's hire, just over $1000 for a lot of very useful work and a lot of very cool fun. 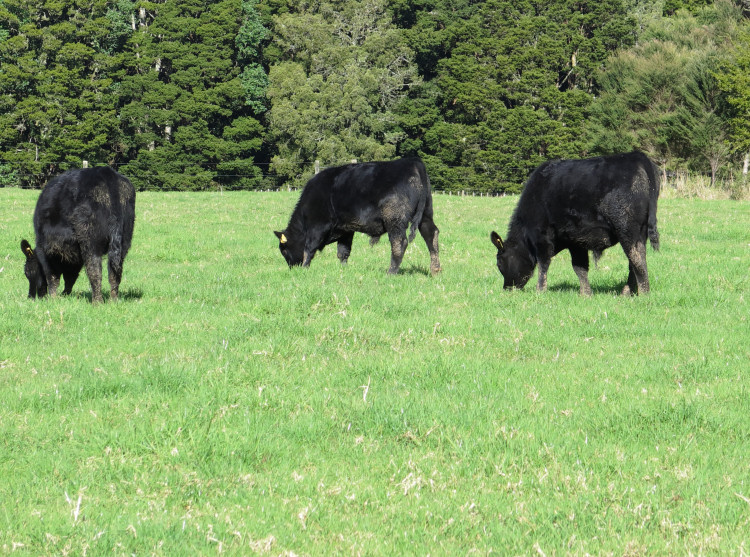 Three little bulls.  One of these will be sold shortly, since I bred one specifically for Jill, who asked for one in advance a couple of years ago when we met in the supermarket.  You can get all sorts of things in a supermarket. 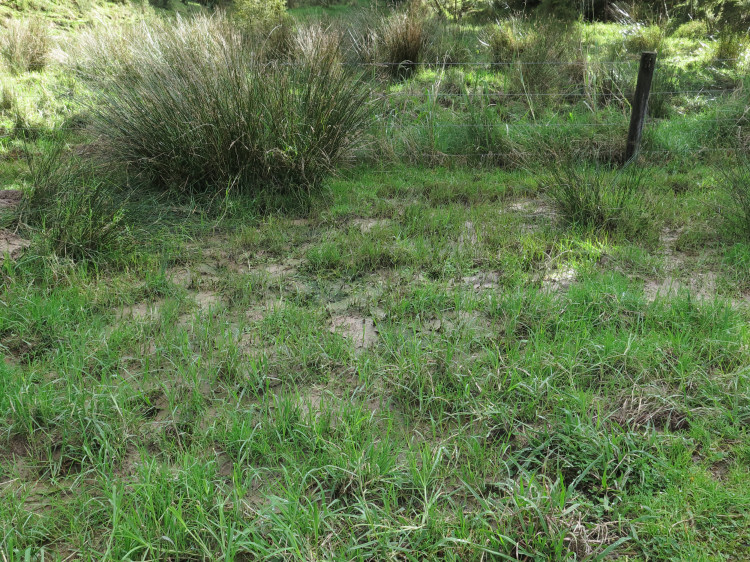 This is the formerly water-logged area from which the water pictured on Sunday was running across the track.  That water is no longer there because this area is now drying out because the drain beyond the fence is cleared. 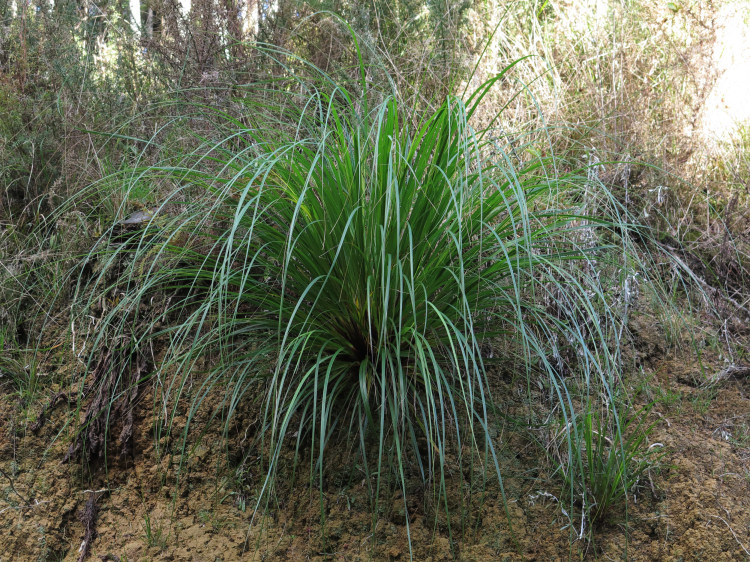 Walking along Route 356 I noticed this attractive native sedge, at the top of one of the banks beside the track.  I presume it is Gahnia xanthocarpa, Māpere.  If so, it will grow to be quite large. 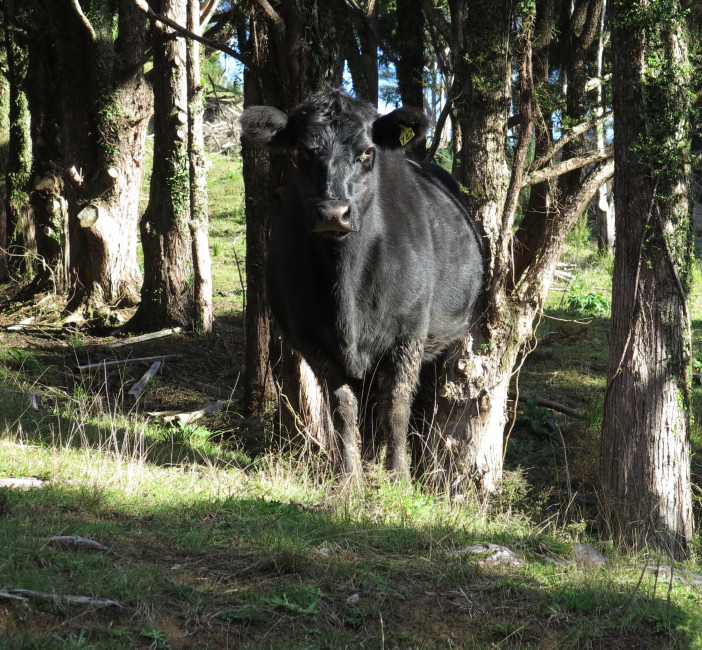 742 looked a bit thin as she came down the Middle Back hillside but it was partly the angle at which she was standing.  I'd forgotten she has an entirely different sire from everyone else.  This year she's carrying one of the last three Mr 87-sired calves.  She's not had one of his before. 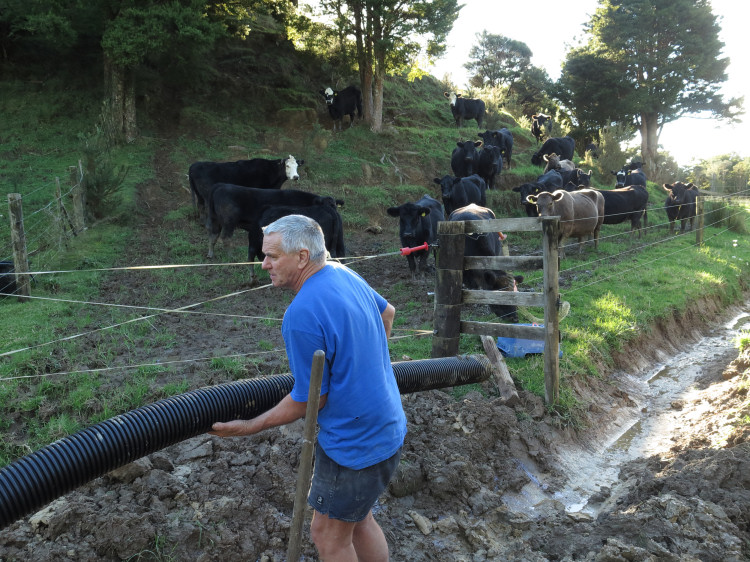 I let the cows out of the Middle Back and they'd all walked along to the front corner of the PW by the time I arrived to see what Stephan was doing.  We all watched him as he prepared the bed for a new culvert pipe in the new drain across the gateways out of the PW and Pines paddocks.

This double gateway will be changed when we fence the Pines swamp, because the fence up the hill will go and this end of the PW and this side of the Pines will become one new paddock.

It won't happen overnight, but it will happen.