Ella went off on the bus on her way back to Whakatane early this morning.  We always try and keep our visitors but they generally go home.

In the early afternoon, in the rain, William arrived with a holed box containing a hen and four chicks, for us to take care of while he and Elizabeth are away for a week or so.  Our little hen was black with four brown chicks and this one is brown with four black chicks.  I bet his aren't all roosters. 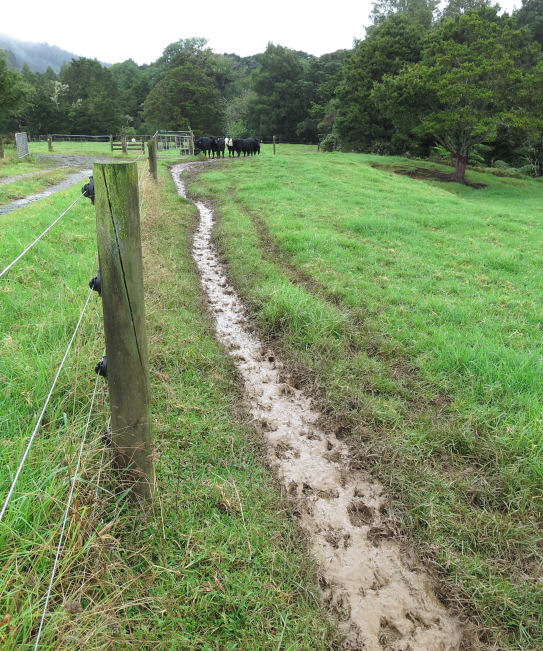 The ground is still fairly firm but there has been sufficient rain that the repeated tramping up and down the paddock of many feet, can make a big mess.

Why the calves insist on walking the whole fenceline when their mothers are only up the top end, I do not know.  Such is weaning. 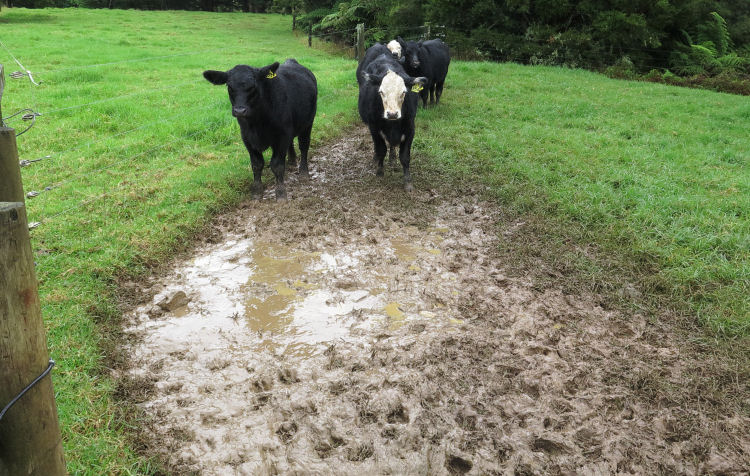 Five sad babies wishing their mothers could come back to them.  The other three were quietly grazing at the other end of the paddock.  They have periods of calling and being upset and times when they're quiet and as settled as they will soon become without their mothers nearby. 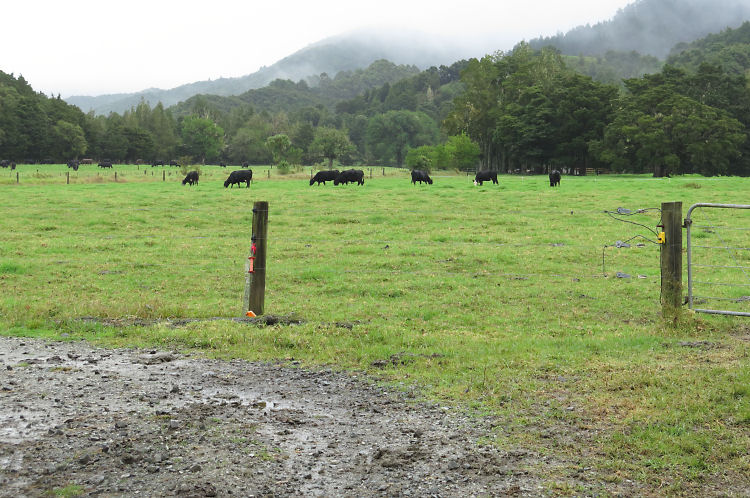 For the cows the separation upset is similar: they spend some time standing by the gate nearest the calves and at other times are away, quietly grazing. 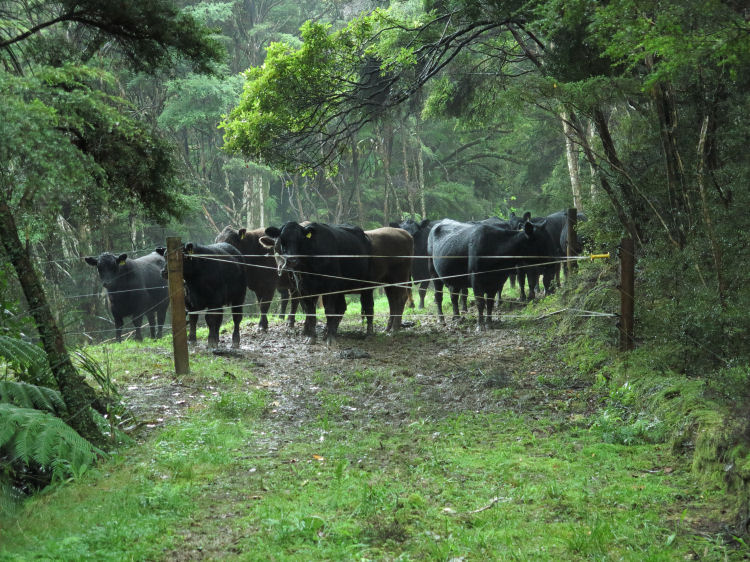 The mob of 17 (cows, calves and three yearlings) were waiting by the gate out of the Swamp East, making it easy to shift them down the little alley-way, across the stream twice, and in to the Pines paddock.

The date was a little confused in our house today because our Farmlands Cooperative calendar had two 29ths this month.  Because one was on Saturday on the right side of the calendar and the other on Sunday on the left, since that's the proper way for a calendar to be, we didn't notice it until we had two pots of milk in the fridge with the same date on them and I seemed to have missed a day in my notebook.  We sometimes have little idea what day it is in our house without reference to the calendar, since neither of us has to go out to work somewhere else every day. 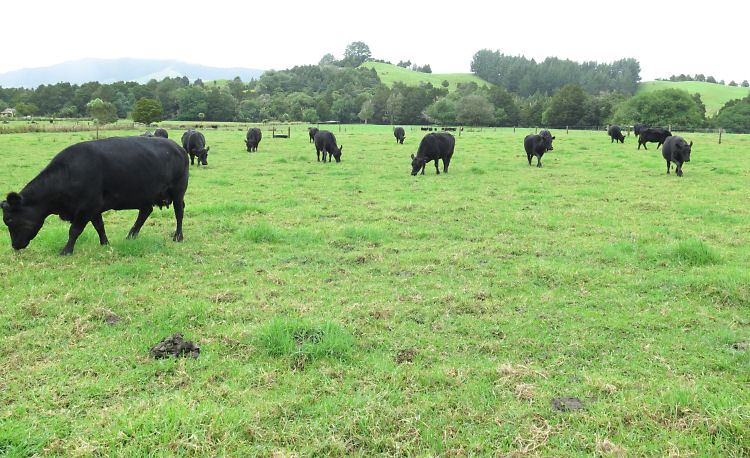 Yesterday afternoon everyone was fine; today I went to move the 23 weaned cows and 613 was very slow to move from where she was standing.  When she did, she really didn't want to use her left hind leg.

I watched her walk, trying to figure out if she'd hurt her foot or one of her leg joints or hip.  But she was soundly putting weight on her foot and after feeling her udder a couple of times, I discovered she has mastitis in the front left quarter.

I opened the gates for them to come through this paddock, which they had grazed very recently, to the Windmill paddock across the lane, letting 613 take her time.  Once on fresh grass she put her head down and ate, so I left her to quietly do that.  If she is not a great deal better tomorrow, I will have to walk her to the yards and get the vet out.

I checked on her later in the day and found her quietly grazing.  As long as she's eating, I'm happy for the moment.

In continual light rain I spent half an hour standing around with the cows while I administered a homoeopathic remedy to 613 (four vulval sprays, ten minutes apart).  In some circles of my acquaintance that is a very sensible thing to do; in others, I consequently lose all credibility.

I use homoeopathic remedies primarily because I choose to be swayed by the proposition of those who argue that Science cannot measure homoeopathy's effects by its current methods, that there may be holistic benefits of homoeopathy that are not measurable in double-blind, single-variable tests.  There is a part of my being that wants to believe in that magic.
On the other hand I would never recommend it to anyone else over any conventional treatment: I know that scientifically something that is water with a "memory" of something else, that gets stronger the more you dilute it, is illogical.

613 was less uncomfortable today and so there was no harm in applying the remedy and continuing to observe her closely.  If you didn't know she'd been so bad yesterday, you'd not have spotted her today.

Mastitis is apparently self-healing in 50% of cases and if antibiotic treatment is applied, 75% of cases will be fixed, so it is not unreasonable to allow a little time, as long as the animal's state is not deteriorating, to see whether the infection will resolve itself.  In this case it appears that is happening quite quickly. 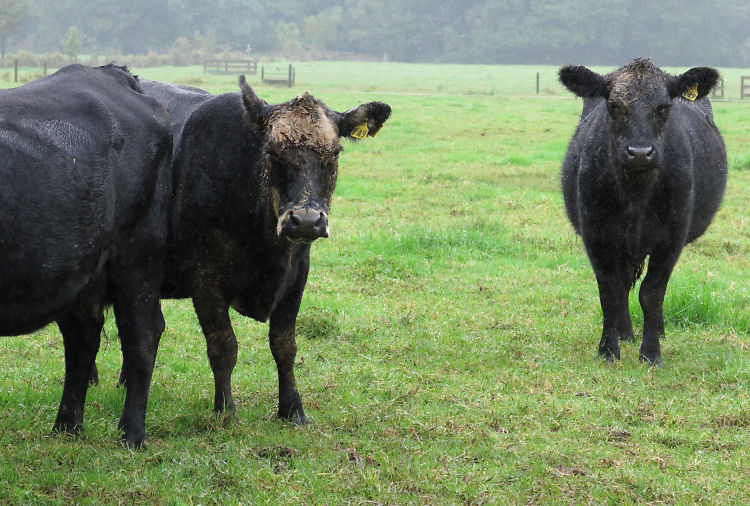 Several of the cows had been enthusiastically rubbing their heads against the bare soil bank near the blackberry patch in the Windmill paddock. 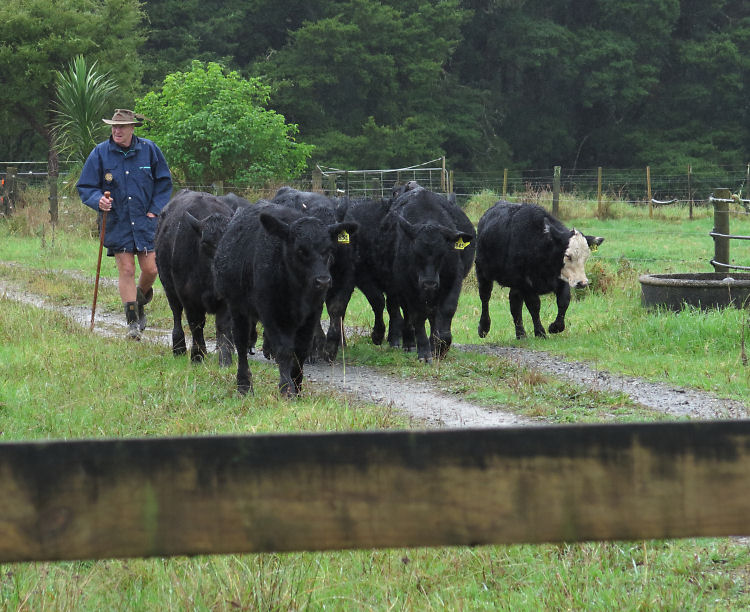 We moved the last-weaned calves from the House paddock along to Flat 4 this afternoon... 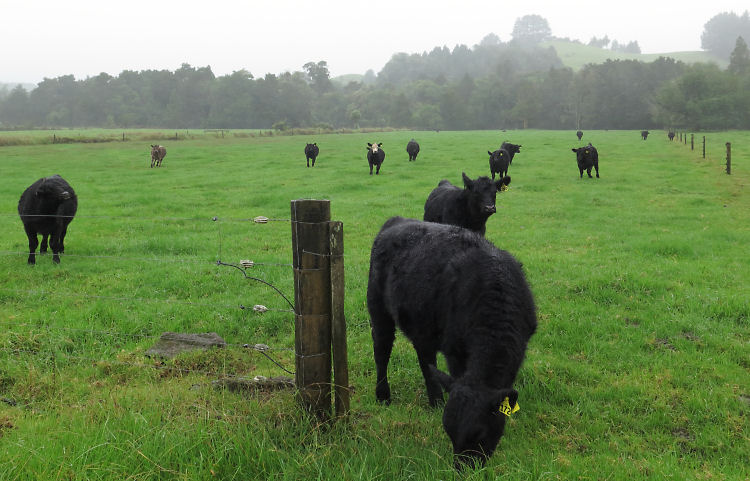 They are a lovely group; I'm very pleased with them.  There are always some smaller ones but the herd has now reached the point where everyone should grow well and those with a slower, smaller start will catch up.  There might be one exception, in Dexie 146's daughter, 173, who may turn out a bit smaller like her mother.  Dexie 146 is off this year, partly because she is small and doesn't raise a bigger calf and partly because her temperament is unsettling.  She looks like she'd like to have a go at me sometimes and that will not do.

The Barrier Air flight from Kaitāia to Auckland leaves half an hour later now, something I fortunately noticed yesterday on my booking, so we slept a little longer this morning than last time I flew.  A young man at the airport with whom I often share the flight, had not noticed the time change and was sleepily waiting for an extra half an hour.

I was off on another Vet Council complaint trip, to attend a meeting mid-morning.  We nearly had a nasty end to our plans while driving to the meeting when a small truck drifted across the centre line in front of us and oh-so-narrowly missed a truck coming the other way.  I do not think we were far enough back to have averted disaster had it unfolded in front of us.

When our business was done I was dropped near Symonds Street, caught a bus down Khyber Pass, a train from Newmarket to Remuera and then walked while texting Liz to tell her I was on my way.  She walked up to meet me and I spent a very pleasant evening with her and the family.

Liz and I spent the day in conversation, browsed a local plant shop and lunched at a French café.  While she went off to attend an appointment, I went to a shop I'd seen advertised in a newspaper and then explored on-line a while ago and, having liked the look of their garments, decided I would go in person for a look.

I don't usually buy new clothing, preferring to find the near-new garments other people have discarded to the charity shops because they didn't suit or no longer fit them.  It's enormously less expensive and there's far less pressure if you make a poor decision: just take it back and let them resell it, write off the $4 as a donation to a good cause.  "Personal-wear" is a bit different.  It was also a lot of fun, trying on different things brought to me by an interactive, helpful, lovely young woman.  Good service is not a given in this country!

Just after 4pm Liz dropped me off at the Remuera train station and I travelled to Papatoetoe, then by bus out to the airport, a journey whose cost was only $3.60 ($4.80 from town, apparently), a great deal cheaper than taking a taxi, a shuttle or even the SkyBus at $19 one-way.  It's handy having an Auckland Transport Hop card.  You have to know that route exists as a possibility though, because the AT site won't automatically provide the option.  At Papatoetoe there was a short walk (100m) up one ramp and down another to wait at the bus stop.

At the airport I checked in at 5.20pm and the attendant said that as both passengers had checked in, we could leave early.  It was rather like a chartered flight! 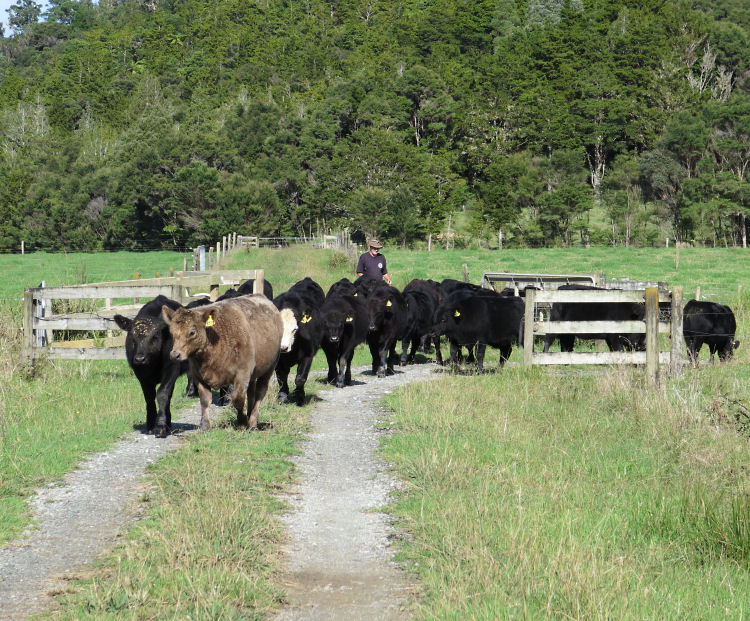 Today's job was calf weighing, to ensure I'd priced my calves appropriately.

Generally, between the pre-weaning weighing and now, they gain only as much as they would lose if stood off the grass for three or four hours, which is a usual weight point for sale.  One year they gained a lot more than that and my price should have reflected that difference but had already been agreed. 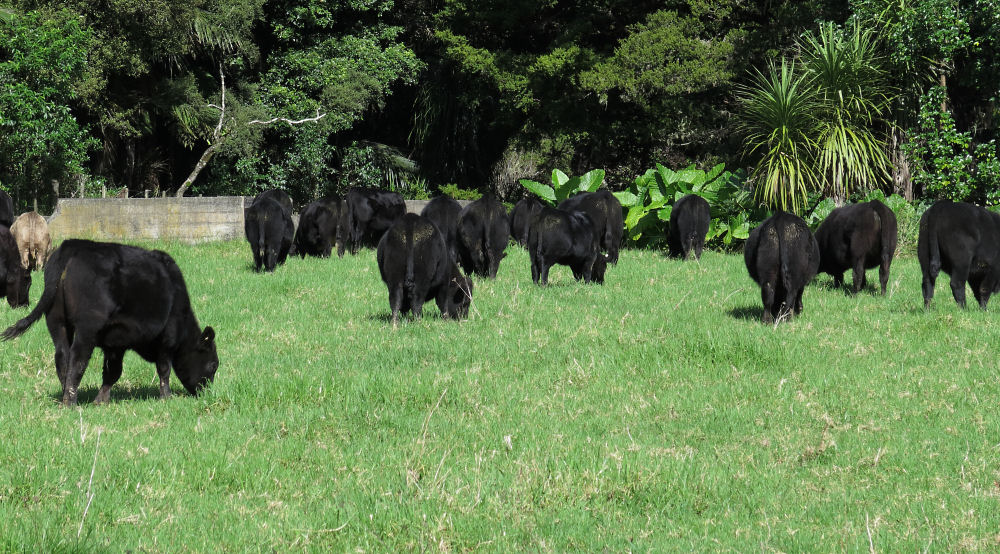 Today their weights were much as expected, so after putting them all out to graze in the Pig paddock for easy return to the yards for their truck trip tomorrow, I went home and processed their weight data and sent my invoices to Heidi. 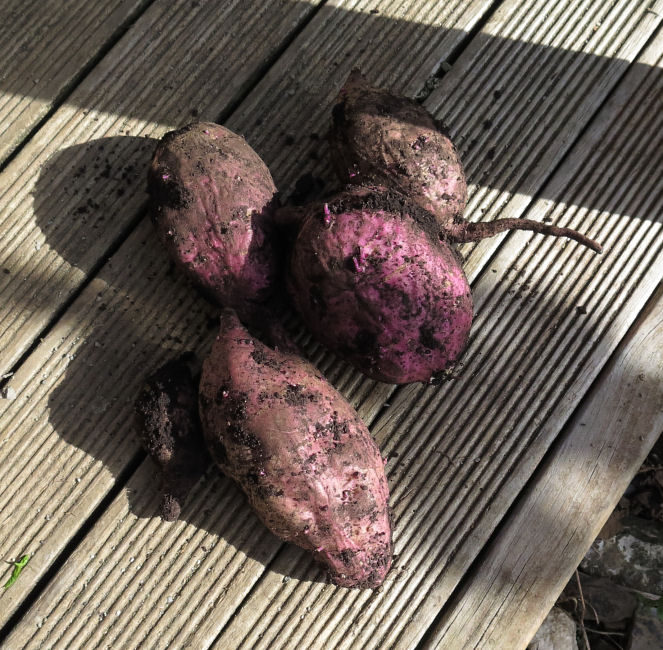 Some unexpected Kūmara from one of the raised gardens, where a plant grew from some vegetable kitchen scraps Stephan had earlier buried. 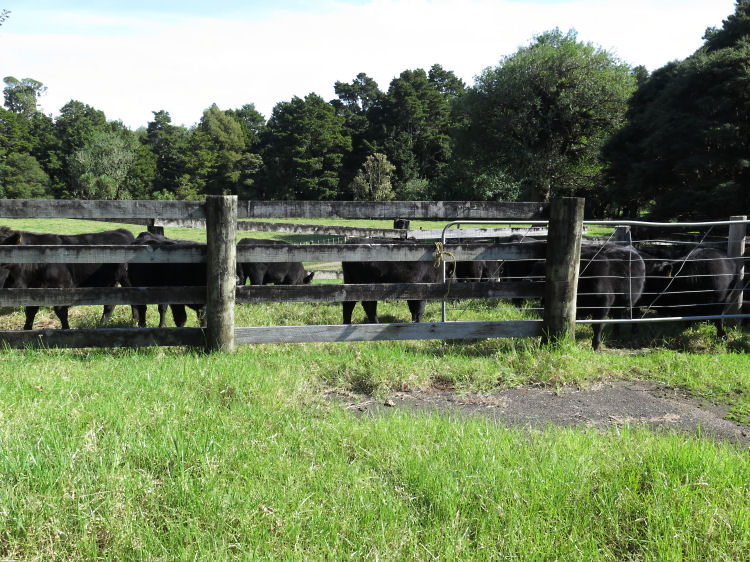 Mid-morning we brought the weaners in to the yards and drafted them into their heifer and steer groups.  I left Stephan with the Animal Status Declaration form that must go with them and went off out the back to check the cows and calves.  I don't like being around when they go onto the truck.  It is rare that anything bad happens so my anxiety about it doesn't help anyone. 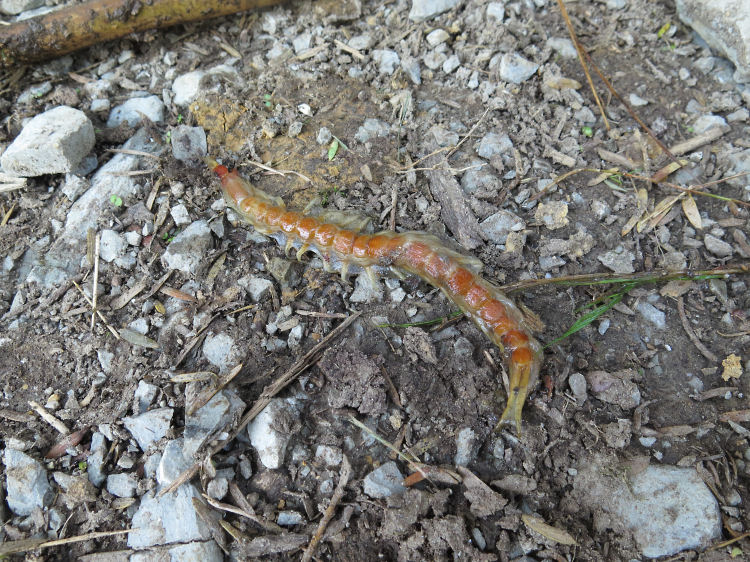 I moved the cows, calves and yearlings from the Middle Back, over the ridge to the Big Back North.  They're lovely to watch.

On the way back down the hill I decided to suck out the trough they'd just left, so it will be clean next time and as I lowered the level, noticed this drowned centipede floating near the bottom.  All sorts of invertebrates fall into this trough from the trees above, drown and foul the water as they then decompose.  A large creature can cause a lot of nastiness in a small body of water! 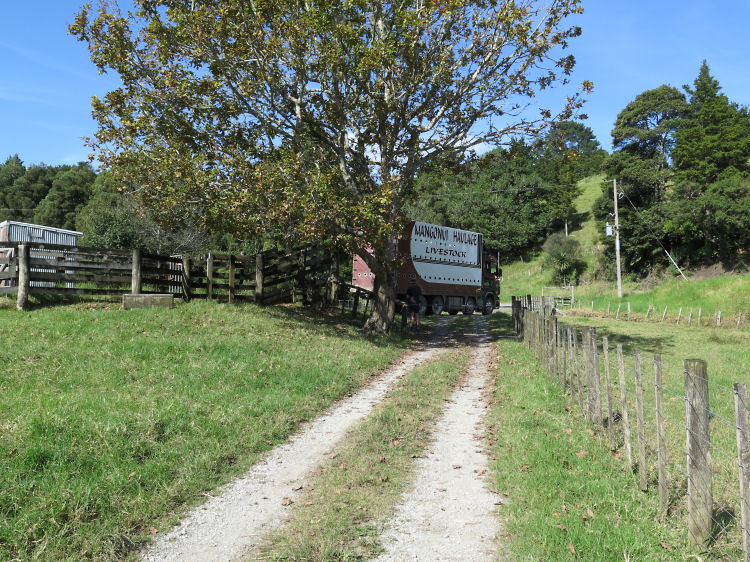 I arrived home, the calves hadn't gone and the truck was just backing in to the loading ramp.

After checking that the calves could be loaded in the order we'd drafted them, so Stephan would need no further assistance, I went away again. 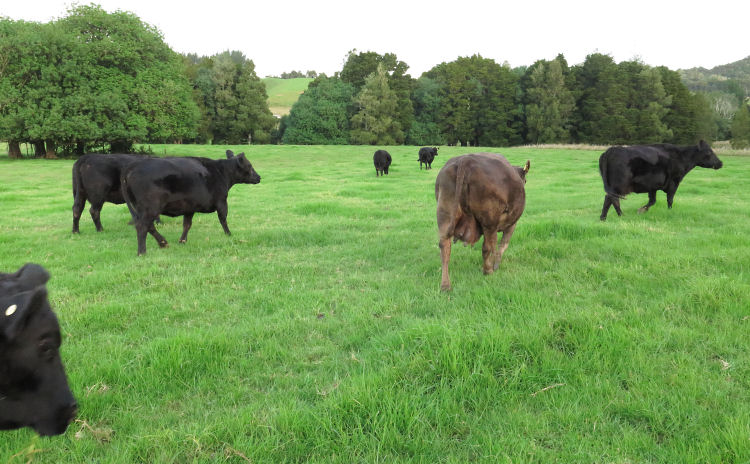 The mothers of the now-departed calves all happily skipped into the grass their babies had left yesterday.