The week beginning the 8th of December 2018.
Saturday the 8th 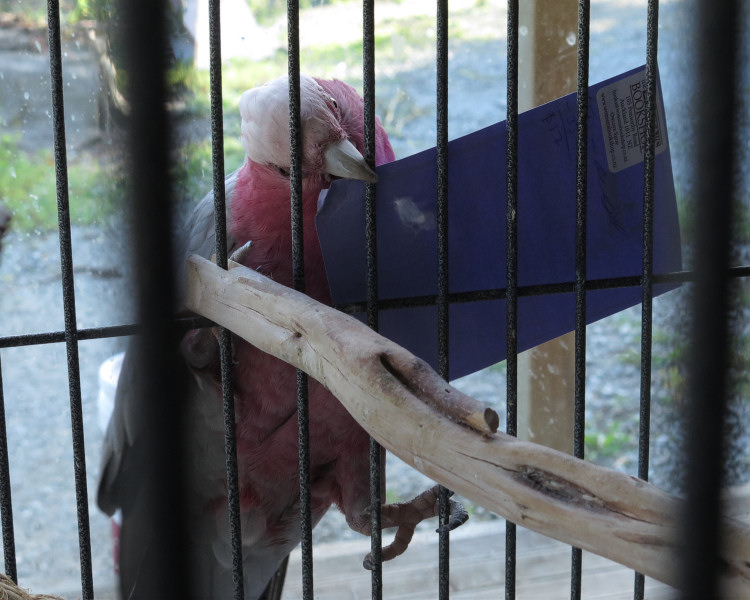 My Women's Bookshop voucher with its residual balance remaining, fell off the table and Floss found it and off she went.  She has an astonishing ability to hold something in her mouth while also using her bill to climb the outside of her cage.

I disappointed her by rescuing the voucher when she reached the top, before she could tear it apart. 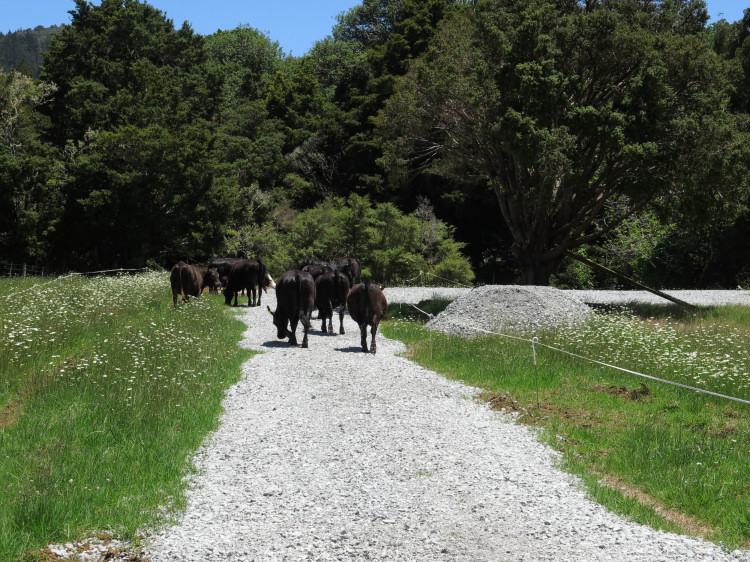 I set up some tapes and then sent the young mob along the new bit of lane that will lead into the new yards.  This lane will also continue to lead down to the stream crossing and across to the Tank paddock, into which this lot gleefully galloped when they saw all the long grass there. 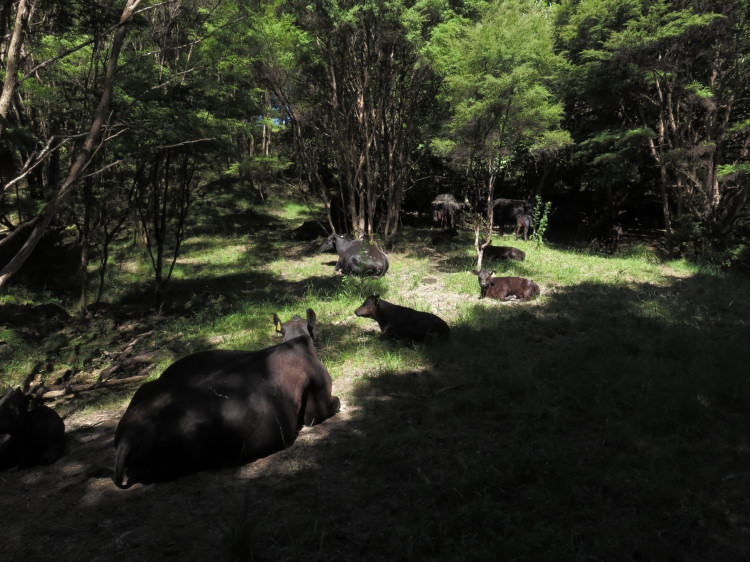 We've obviously reached that time of year when it's almost impossible to take successful photographs of cattle in and out of the shade.  The sun is so bright when it shines that even in reality, it's hard to see into the deep shade.

These animals are in the Swamp East, sitting near a horribly blocked and therefore deeply muddy culvert crossing, which they'd presumably decided they couldn't be bothered struggling through, so sat down to rest. 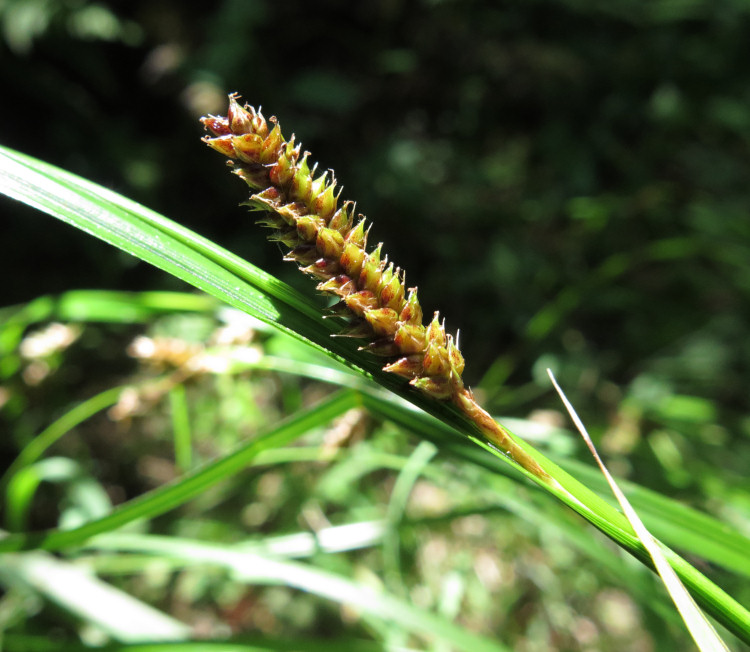 One of the native sedge plants through the fence in the riparian reserve.  I was attempting to take a photo of an interesting little fly but couldn't get a good fix on it amongst the leaves.

I think this may be Carex flagellifera. 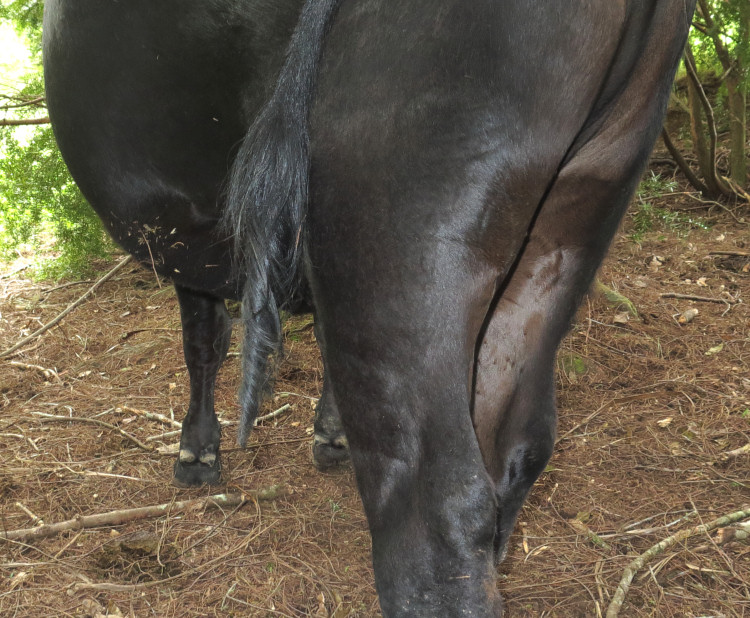 When Zoom and Spot were the two calves in the House paddock, we could always tell which one was Zoom because she had a tight twist at the end of her tail: she still does. 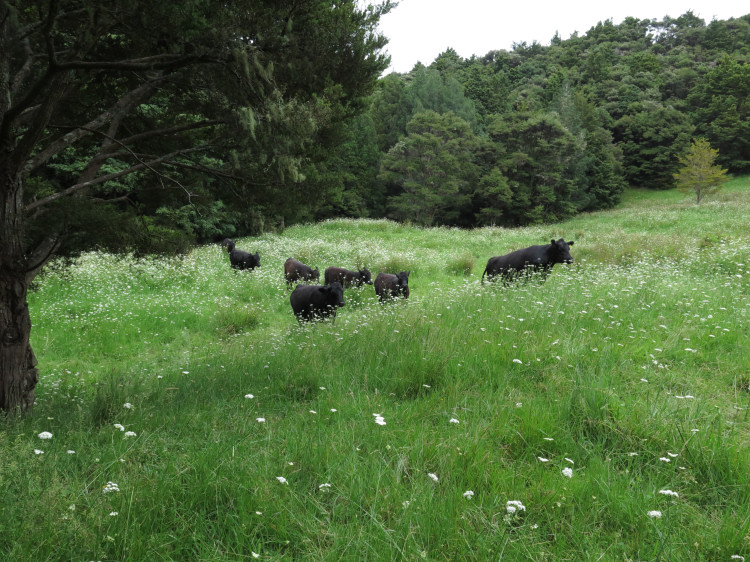 There's rather a lot of feed in the Tank paddock but the heifers still followed me back to the gate when I left them. 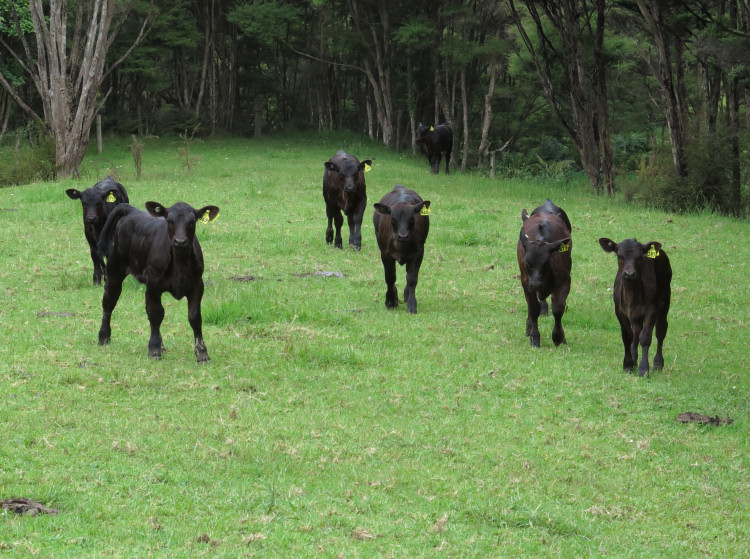 In the Swamp paddock the cows had all come toward the noise of my bike when I arrived but the calves had been sleeping in a group in the far corner and took a little longer to appear. 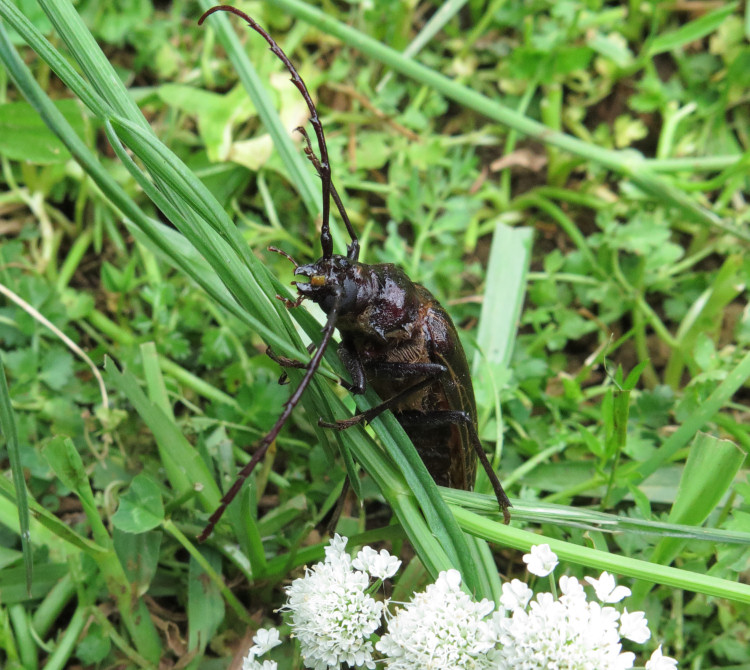 I fished this huge Huhu beetle (Prionoplus reticularis) out of the Back Barn trough with a stick.

Those fierce-looking mandibles can hurt, I discovered one night when I first lived here, previously having assumed Huhu beetles to be big, clumsy, bumbling but harmless creatures.  One landed on my arm and left a small bleeding wound!  I've stayed clear of them ever since. 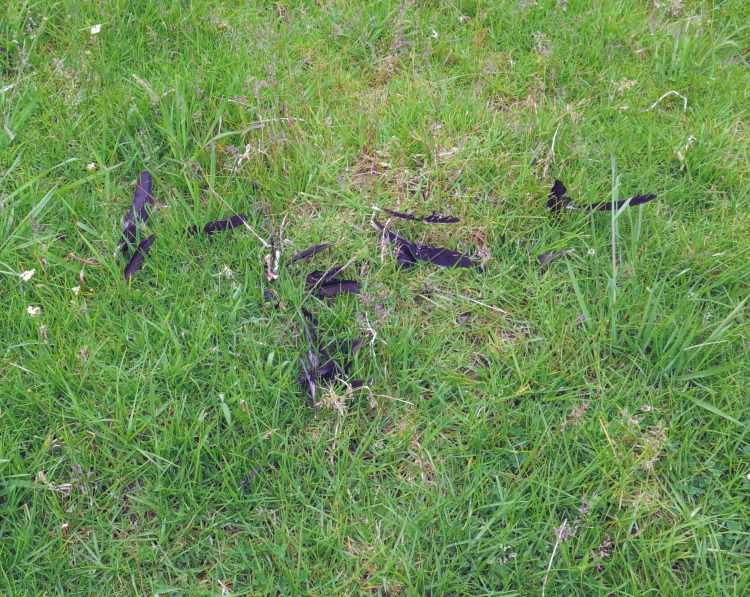 Death in the wilderness. 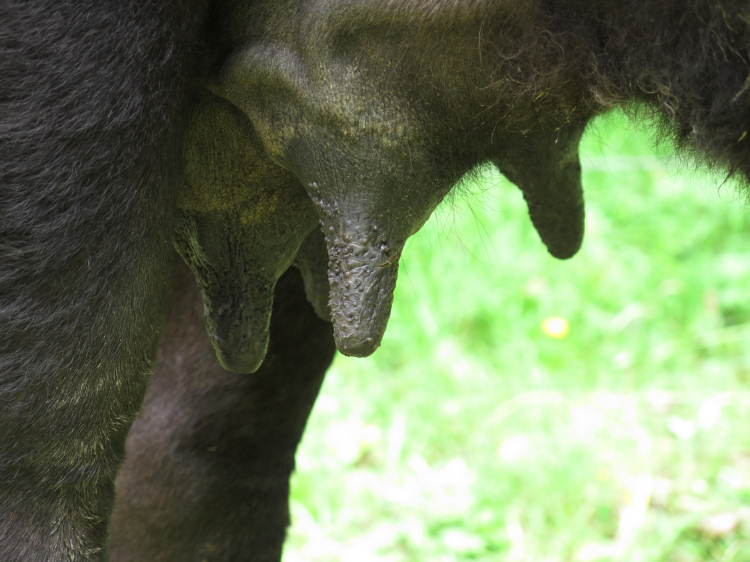 Something odd has happened to Gem's teats.  The calf is feeding normally, so it's not bothering either of them. 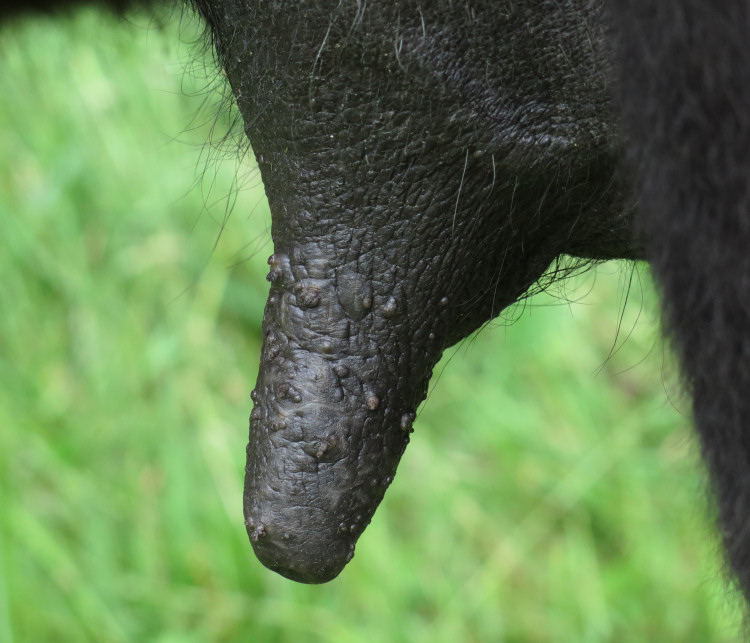 It looks like she's suffering a bad case of warts.

Meg doesn't have them on her non-lactating teats and none of their paternal half-sisters do either. 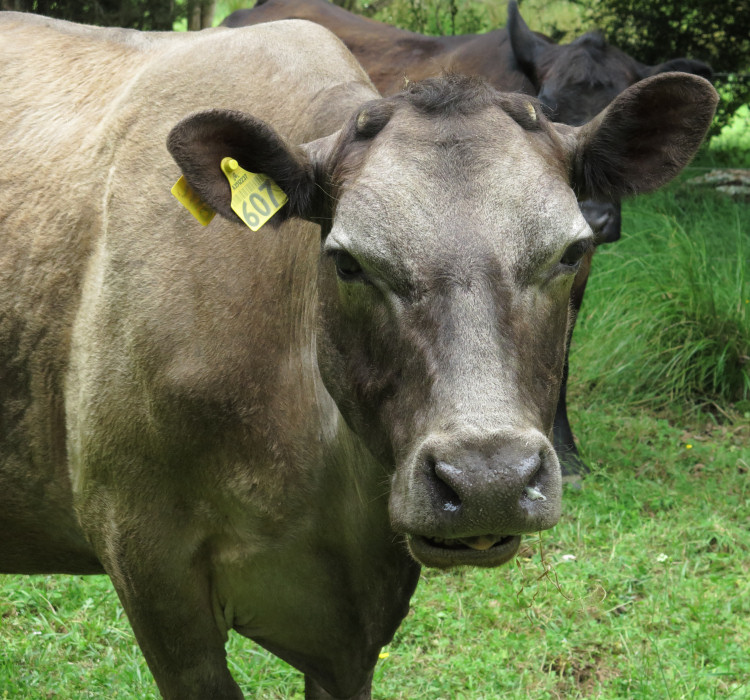 The cows are moulting, changing from fluffy to smooth for the summer.

607's scurs really stand out in the summer months.  They may also have grown slightly as she ages.

Daughter Jet has them too, but I don't recall seeing them on any of her sons, although if they were like these, they may not have shown up until after the calves left the farm.  To have scurs, her sons would have to inherit the horned gene she carries (a 50/50 chance) with the scur gene.  All her calves inherit a scur gene from her, since a female bovine must be homozygous for scurs to have them. 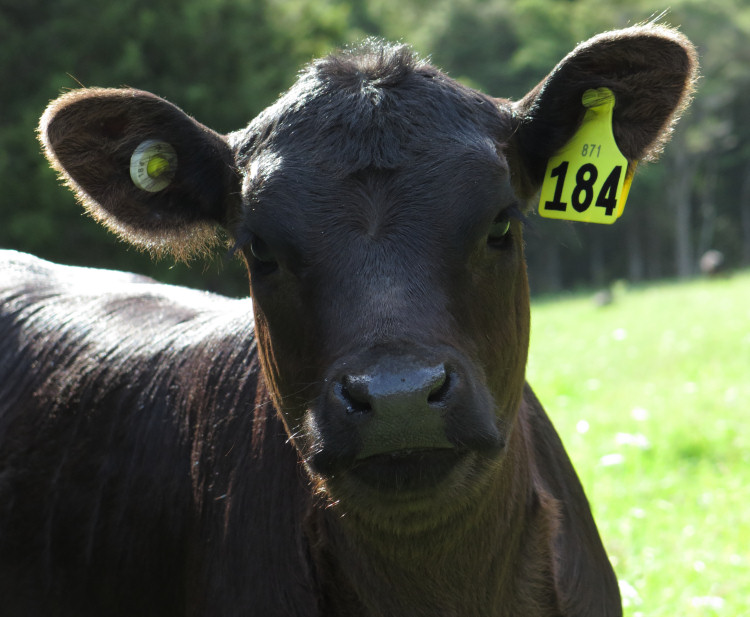 This little heifer watches me with friendly interest whenever I'm near her.  I think she might end up being quite quiet.

I was having some quiet moments with some of the cows, picking engorged ticks off their udders and bellies and popping them.  It looks like a season of tick abundance; poor cows. 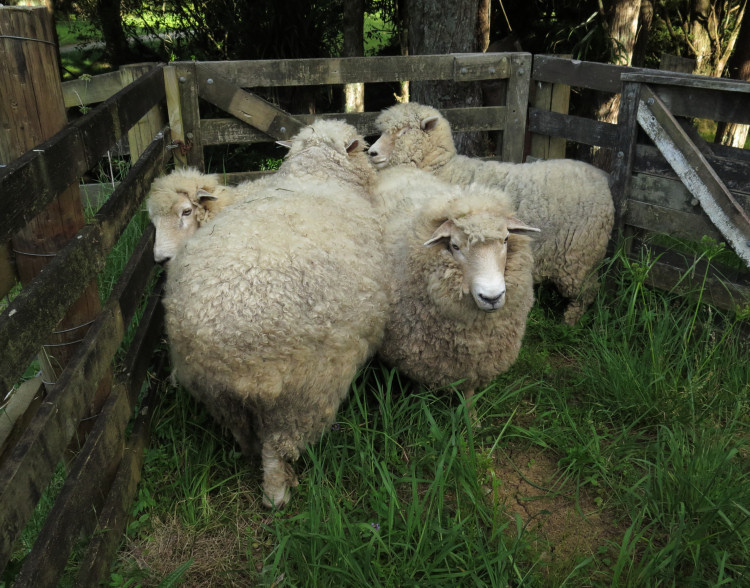 After a week of fine weather but with clouds gathering again, we thought it prudent to get the sheep in this afternoon so they can be put in the shed overnight for shearing in the morning.  They have eight months of wool growth on their bodies and will be at increasing risk of flystrike if not shorn. 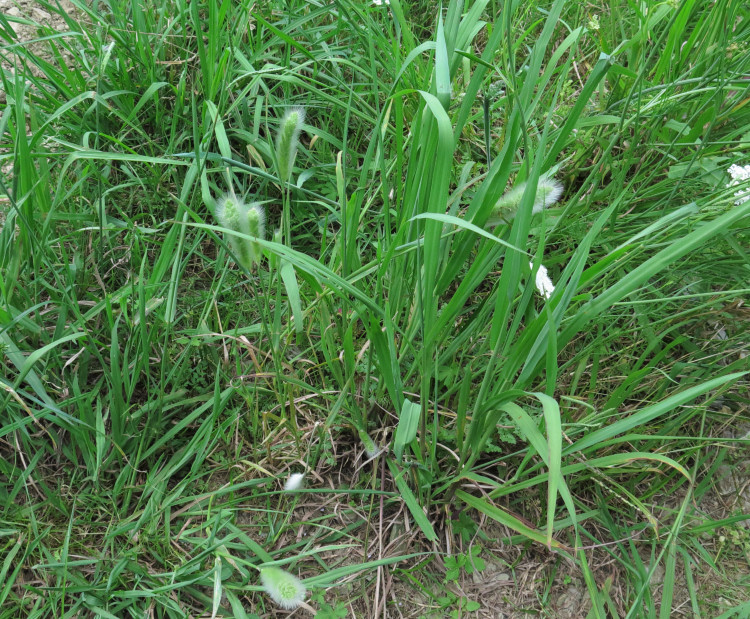 I turned away from the sheep and saw this, Annual Beard Grass again.  We pulled half a dozen plants from here yesterday but obviously missed this one.

The plants and their flower heads go carefully to the fireplace inside, so there's no chance of them setting seed and dispersing them anywhere. 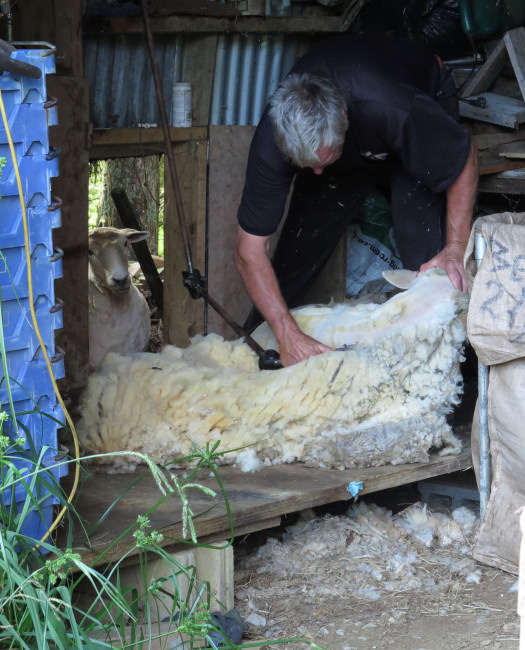 Stephan got on with the shearing this morning and when I went to see how he was getting on, he'd already shorn half the mob: two sheep.

Here Young Ewe was watching from the out-door as her daughter was being shorn.  These two are very close.  When we slaughter the daughter we will have to also do the mother, so she does not remain alone and distressed.

It doesn't feel very good, writing that sentence.  I like sheep, like watching how ours behave but I no longer enjoy the requirements of caring for them.  They are a constant worry when it rains in case of flooding and at this time of the year, flystrike is an ongoing threat. 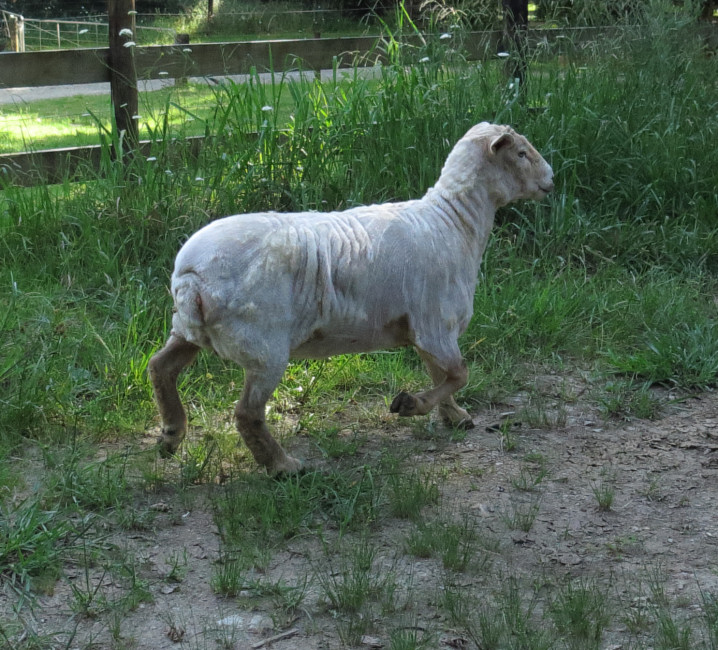 I didn't see all these wrinkles until I processed my photos.  There was a lot of well-conditioned skin moving as the ewe was running.

A ewe shouldn't be this fat but the four of them live very much as they like, just eating and resting and enjoying their world, in between short bursts of interference from us when some form of maintenance or welfare-protection is required. 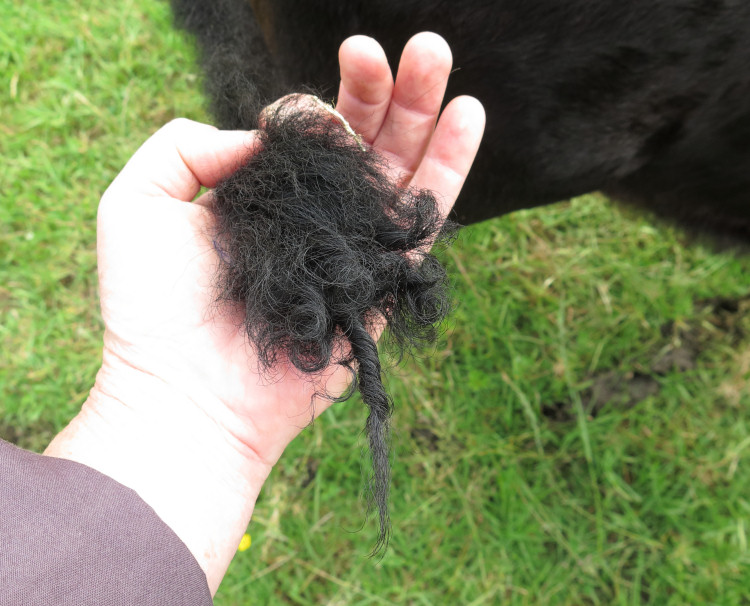 I spent some time scratching and stroking the friendly calves this evening. 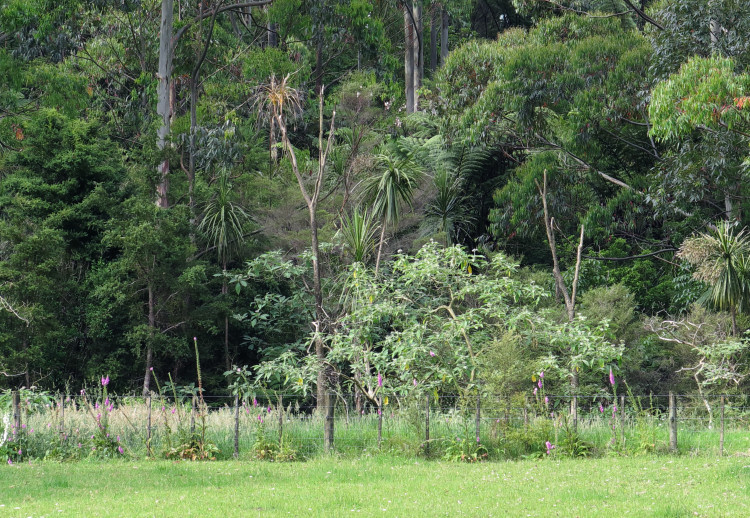 The Tī Kōuka suffering Sudden Decline on the Swamp boundary is nearly dead.  I last took a picture on 5 November. 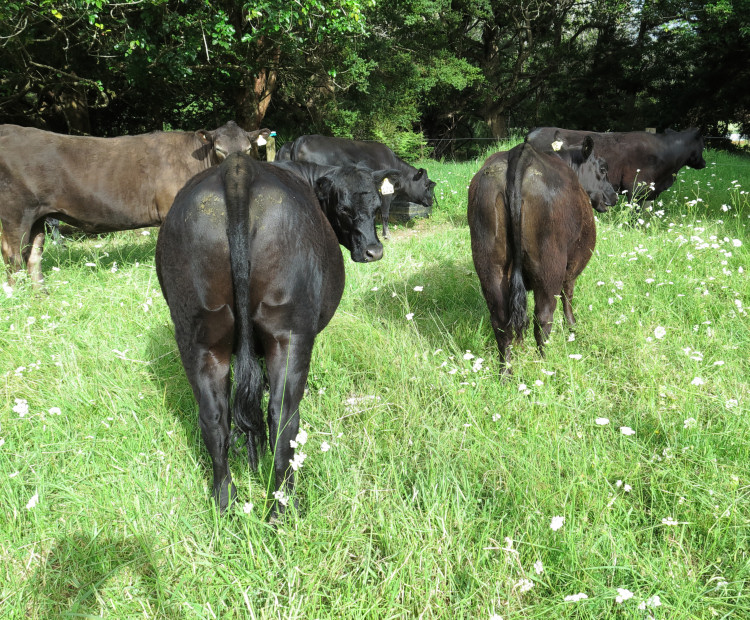 Look at this stunning rear!

This is Dushi 170, Eva's daughter.  It looks very much like leaving them on their mothers until they were nine months old has had a very positive effect.

856 is to her right, same age and treatment but not as impressive. 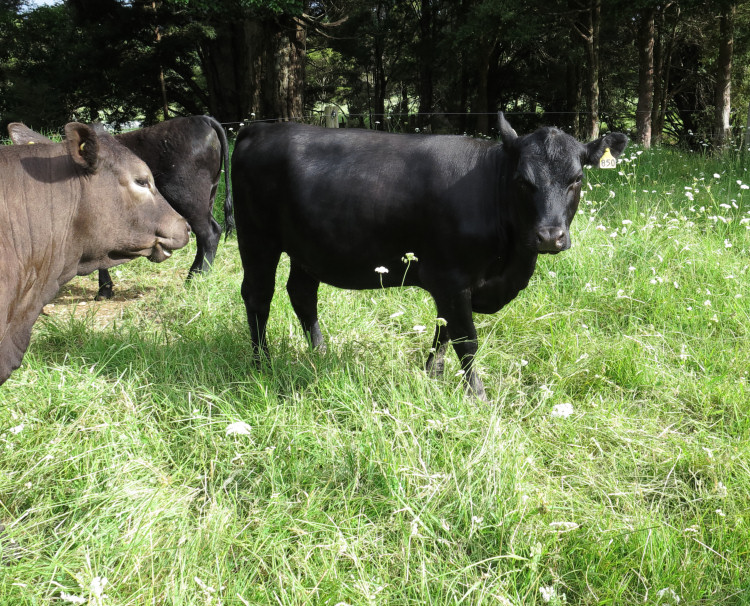 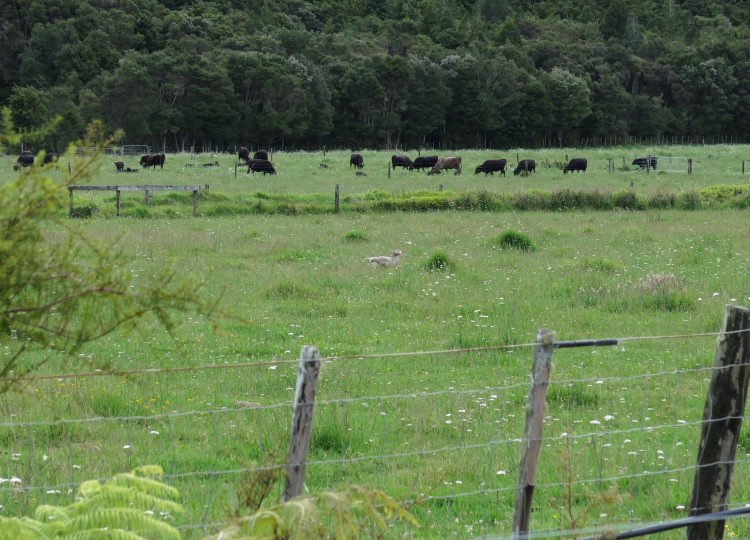 Madam Goose is wandering far and wide.  Here she's out in the middle of Flat 1, not her usual territory.  She's probably eating a great deal after nesting and fasting for weeks.

She seems to have forgotten she's one of the sheep. 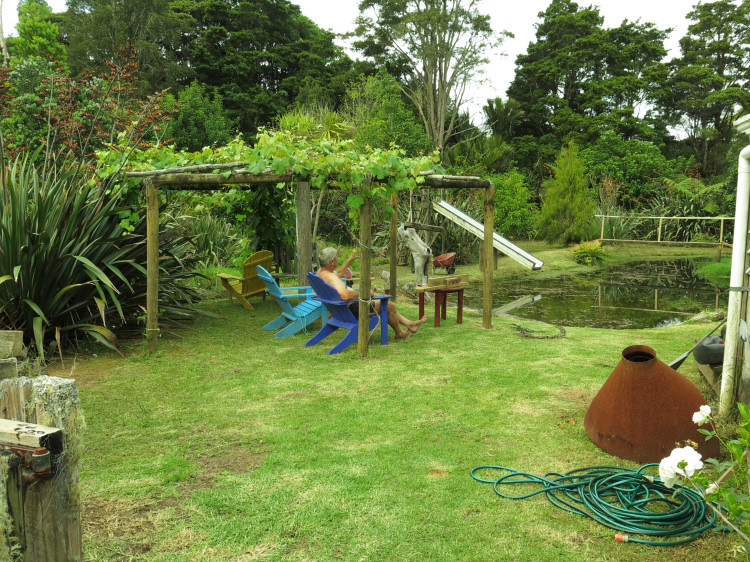 When I arrived home, Stephan was sitting down by the pond explaining something to Floss.

He'd been mowing, tidying around the pond, making it all lovely for summer. 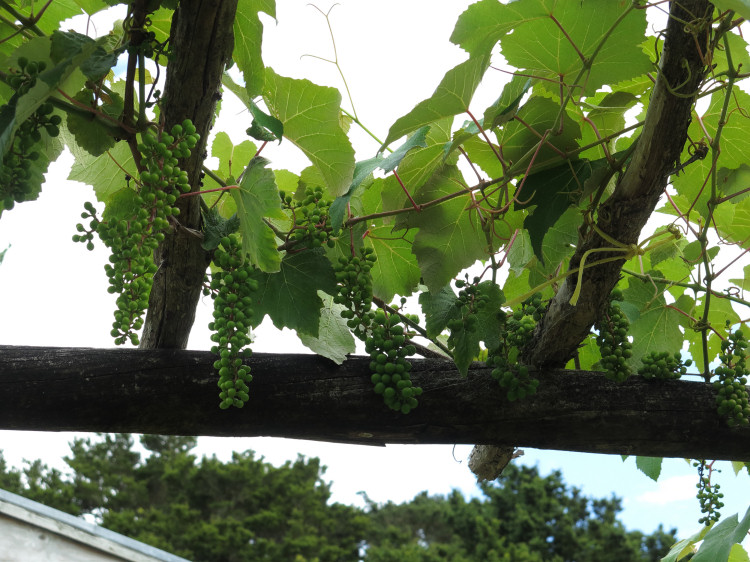 I sat down with them and looked up to see lots of lovely grapes.

These are a delicious black-skinned grape, a vine that was quite a lot smaller last year.  They're all growing very well this season. 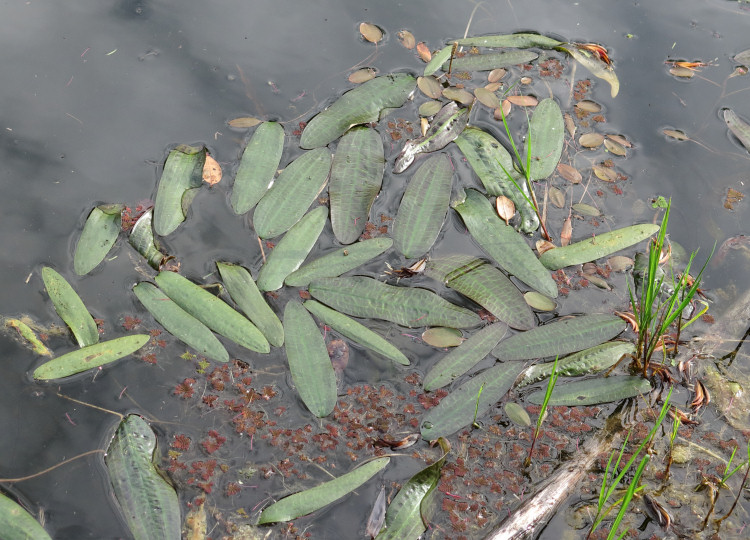 I think this may be Ottelia ovalifolia, a pond weed we should not have.  I have a horrible suspicion someone may have brought seeds here in their togs.  But I'm not really sure, since there are many plants and it may have come into the pond with flood waters.  I just can't imagine any reason why it would be anywhere upstream.  But then again, who'd have thought people upstream would put Tradescantia clearings in the way of flood waters either?

We'll have to try and pull these plants out so they don't take over.  The other, native, weed is already abundant again this season and will provide lots of entertainment for raft-borne weeders during the summer. 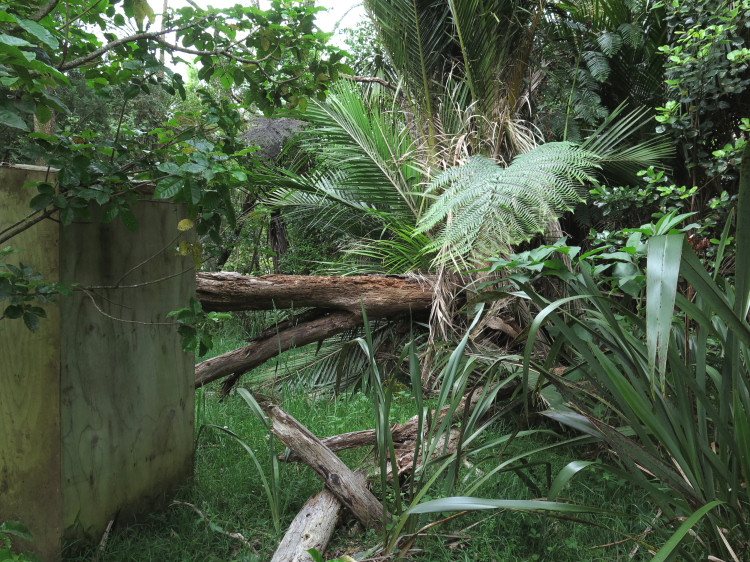 A big, dead Blackwood had fallen from Jane's bit of the stream bank, coming down exactly between two closely-growing Nikau and narrowly missing the long-drop building.  (That just sits there at present, without any purpose, having been earlier washed away in flood waters). 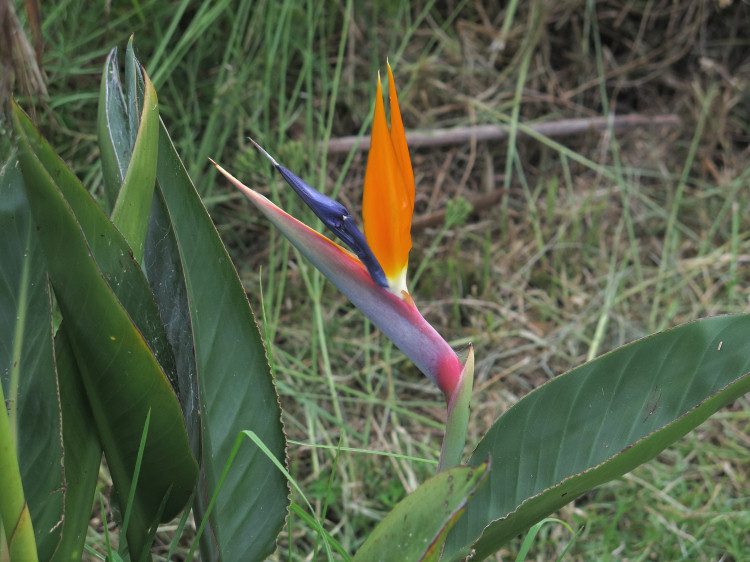 A Bird of Paradise flower.  This plant still looks to be struggling after being moved some time ago. 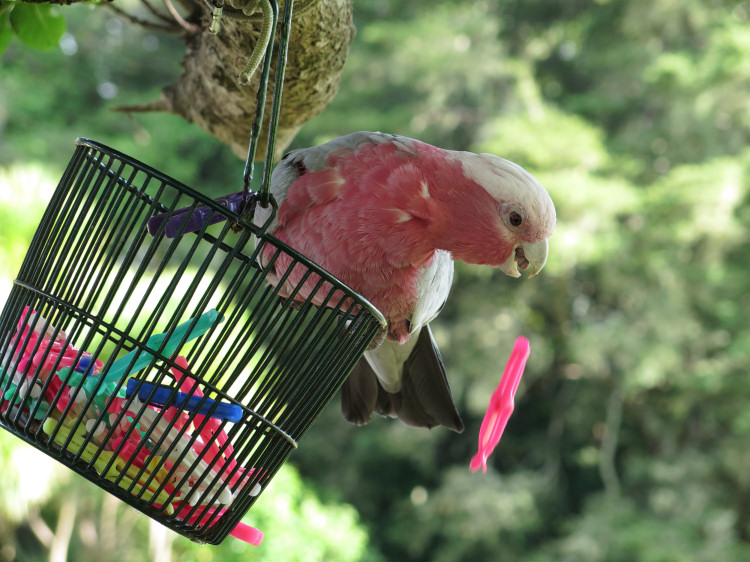 Floss and some "environmental enrichment" activity.

I had put her up the tree and usually I move the peg basket out of her way.  I took some video of her as she picked up and threw most of the pegs to the ground.  She'd select one, inspect it with her tongue and then drop it down, watching it fall to the ground, before picking up the next.  She found one of a different type and turned much further around, to drop it in a different place.

If that video would entertain you, you may find it here. 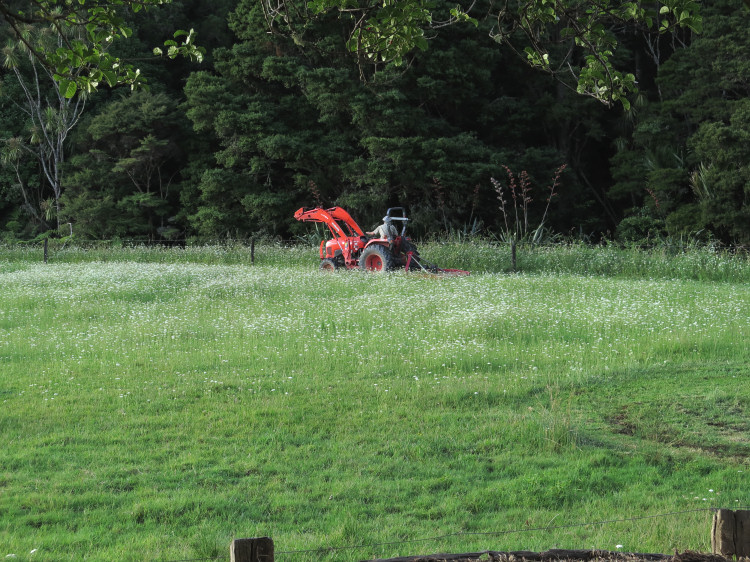 When we were in town earlier in the day, there'd been a couple of torrential downpours but when we came home, the roads were barely wet and the gauge had less than 2mm in it.  By evening there wasn't any trace of the dampness on the grass, so Stephan set out to do the first lot of paddock mowing for the season, to reduce the Parsley Dropwort flowers.

It's not a bad job on a warm evening, after the sun has gone down.