The week beginning the 8th of September 2018.
Saturday the 8th 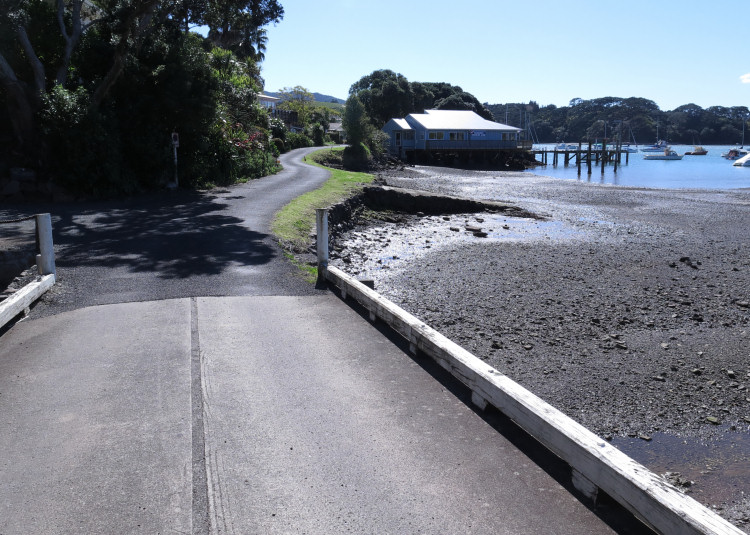 After checking out of the motel, we drove around Mill Bay to the area used by boaties launching their trailer boats into the water and then walked in the lovely warm morning.

When I was a child, neither this bridge nor the formed road were here.  There was only an old concrete ramp and wheel tracks along the shingle above the high-tide mark, used by the resident of the one original house, and people taking supplies to boats temporarily tied up at the jetty.
I could see it so clearly in my mind's eye as we wandered around.

We came home and carried on in holiday mode, walking together out to shift the cows from the PW.  As I walked along the sunny track calling the cows, I noticed the numerous native bees now actively flying around the clay bank where they nest during the summer.  Stephan followed the cows, making sure they all came along the hillside to the other gate. 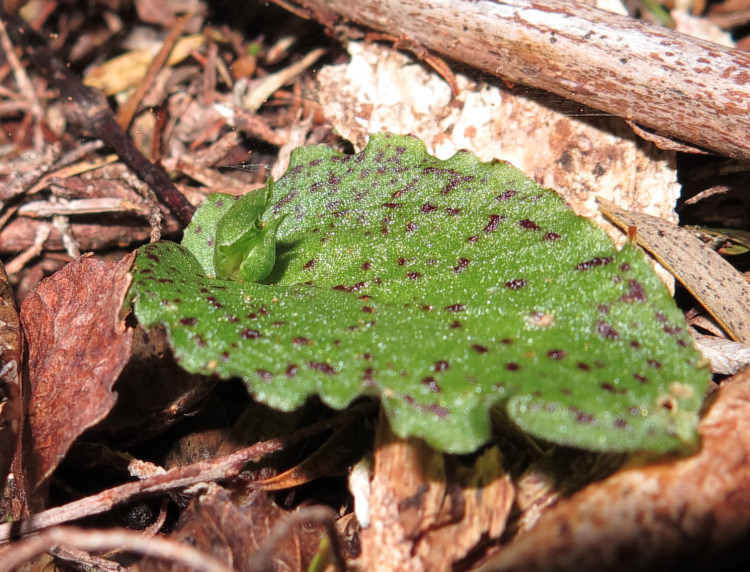 Then around to the Bush Flat and up into the Bush Hill reserve to find the orchids again.  We spent some time wandering carefully around (to ensure we didn't step on them by accident) and eventually discovered them again.  My earlier photographs of trees as reminders really didn't help.  Stephan tied marking strings on some of the trees while I photographed many of the plants again. 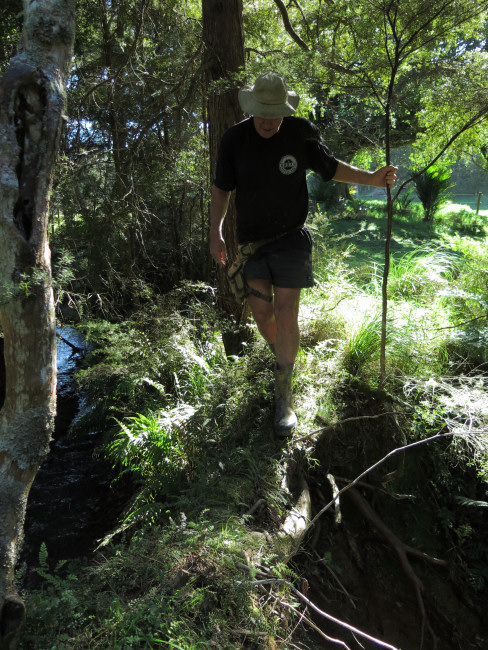 This is the natural bridge across the stream's new course, where it has channelled its way through the stream bank over the last few years.  Since he was carrying his pruning saw, I asked Stephan to remove a couple of Totara branches to clear the pathway so I can use it more easily when the stream is in flood.

The roots forming the bridge are solid, live Totara, likely to remain so for as long as I'll ever be able to come here. 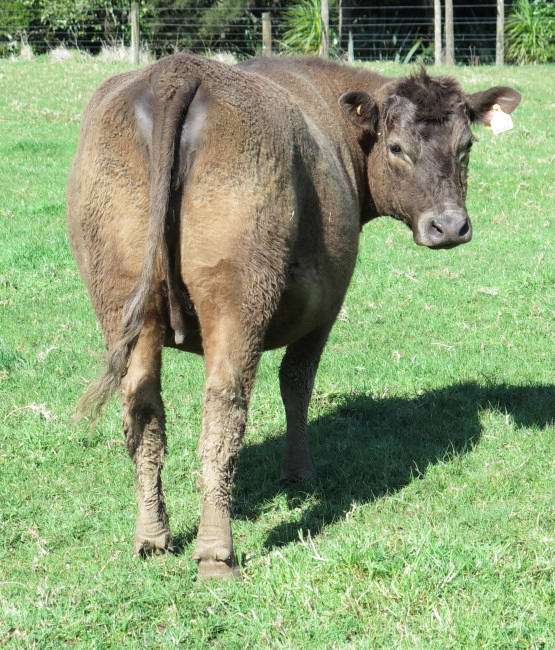 807's udder is developing quite quickly now - it is still small but constantly changing.

I always want to run calving date competitions on everyone, since I spend the whole period doing that with myself!  807 was the first inseminated, on the same day as Eva.  I'm going to watch her pretty closely, since she herself was born unexpectedly early, at only 270 days' gestation.

The sire of her calf has a gestation EBV indicating a slightly shorter-than-average gestation.  In this herd last year, while his six daughters averaged 277 days (a day less than this herd's average), his two sons were born on days 282 and 283, both to mothers whose average gestations before then had been 278 days.  While a day or two here or there may seem very little, to the bovine midwife who has to get up every three hours during the nights before 807 calves to check on her, it matters quite a bit!

In February, Brian and Gaye mentioned an upcoming New Zealand Symphony Orchestra concert, in September.  Recognising we'd be best to buy tickets early to ensure being able to sit where we liked, Brian and I conferred and I bought four tickets.  I think we'd all forgotten the engagement at some point but fortunately thought to remind each other in time to make arrangements before this evening, when Brian and Gaye collected us from home and took us to Kerikeri where they shouted us dinner, before we went to the show.  It was great. 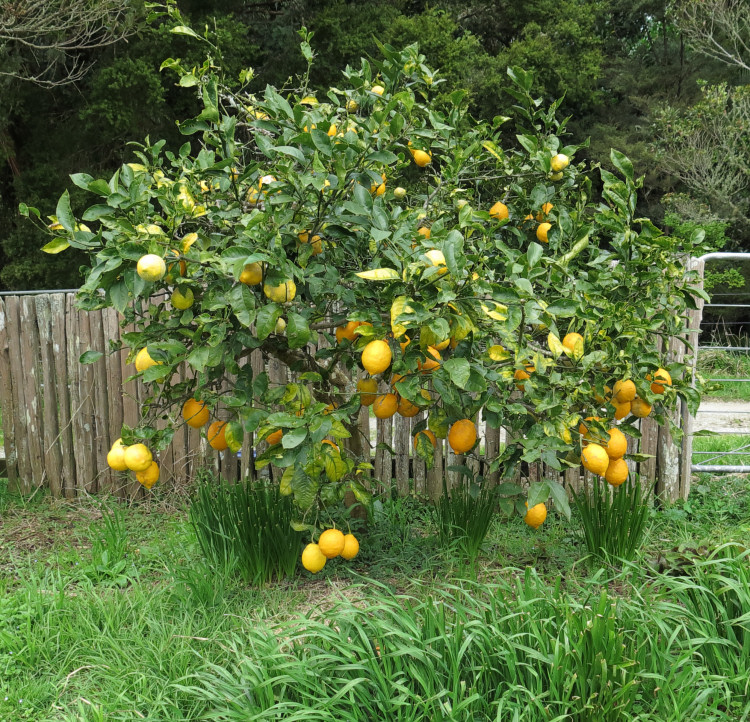 The lemon tree (Meyer) that Stephan's mother, Muriel, gave me years ago.  This season's fruit are beautiful, round and yellow instead of the oft-times warty hard-skinned fruit when climatic conditions are not quite right.

The tree is challenged by lemon tree borer, so that half of it is gradually dying off but the rest appears to be carrying on quite healthily.  We generally prune it a bit each year, after the fruit is all picked.

Below is a picture in its first fruiting year, 2002. 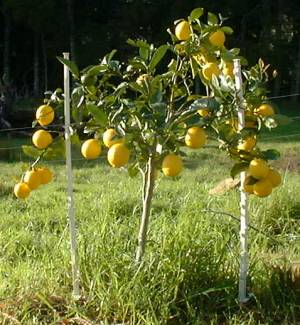 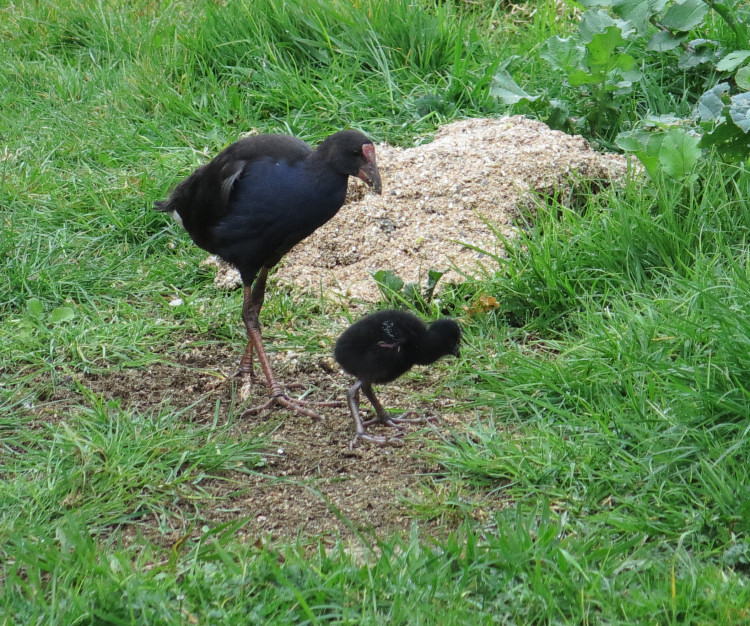 Yesterday I dumped a pile of aviary sweepings out on the lawn where I could watch it from my office and the kitchen sink.  I knew the Pukeko would soon arrive to pick their way through it.

These are the juvenile and one of the three chicks.

I love being able to watch them up close.  Their family behaviour is fascinating and the chicks are very cute. 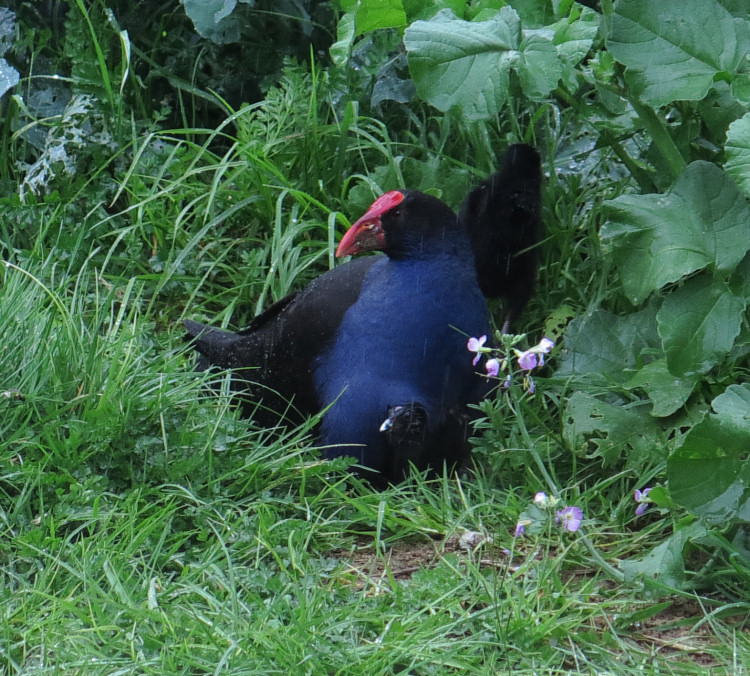 When rain began to fall quite heavily, mother Pukeko crouched and called the chicks to shelter beneath her.  I'm assuming it's the mother bird but as they cannot be distinguished from each other, I can't really be sure.  Perhaps any of the adults in the group would do this? 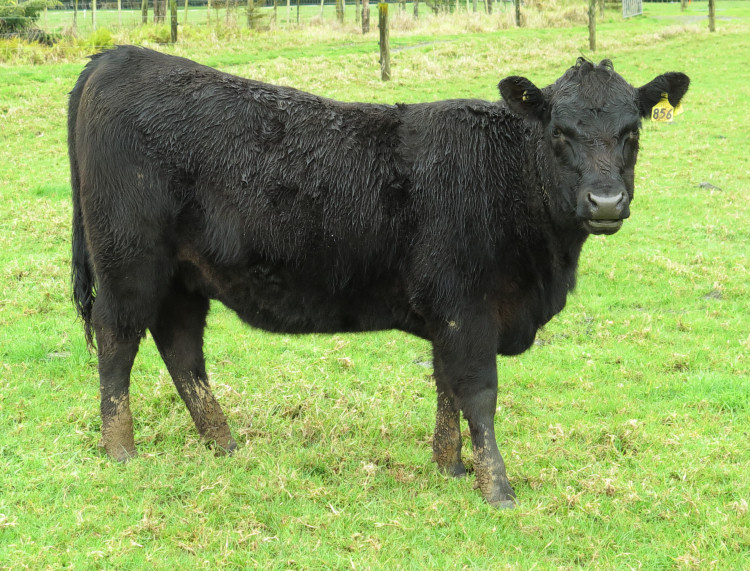 Yearling 856, in a funny position for a good photo but looking nice nonetheless.  She's a nervy critter but seems more so partly because most of the others are so quiet - she and Ellie 171 are about the same in temperament. 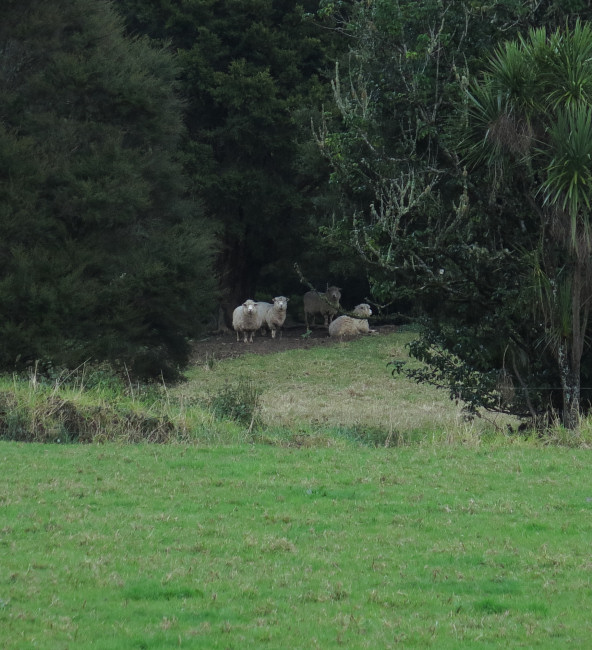 Four sheep in their usual paddock.  I don't see them much these days, except through the trees on the other side of the stream as I walk along the driveway.  Stephan keeps an eye on them daily to ensure they're all safely upright.  They have rarely been cast in that paddock and they're not at great risk of it when not in lamb and not overly woolly. 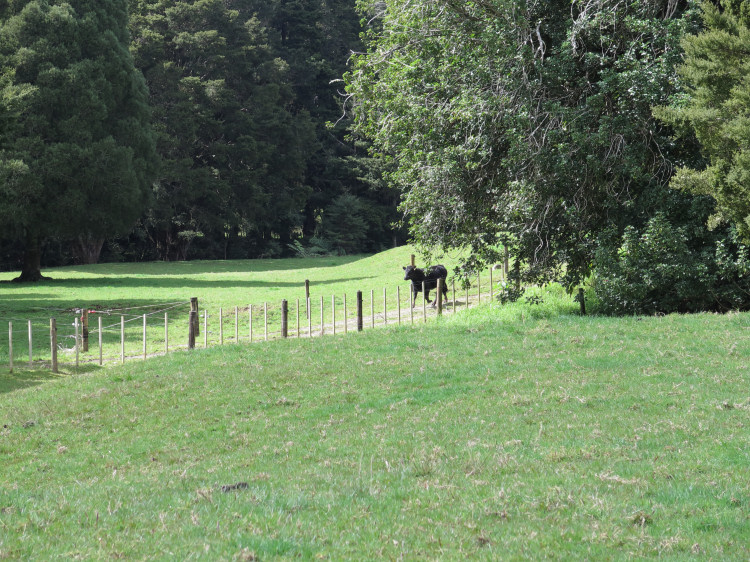 I had a plan when moving the young heifers, then thwarted by Spot the Elephant's habitual lagging behind: if I took the others too far ahead, she might get confused, panic, probably end up somewhere she shouldn't.  And so they went into Mushroom 2 (out to my right in this picture), so Spot could still see them ahead of her, rather than sending them on down the lane to the Bush Flat. 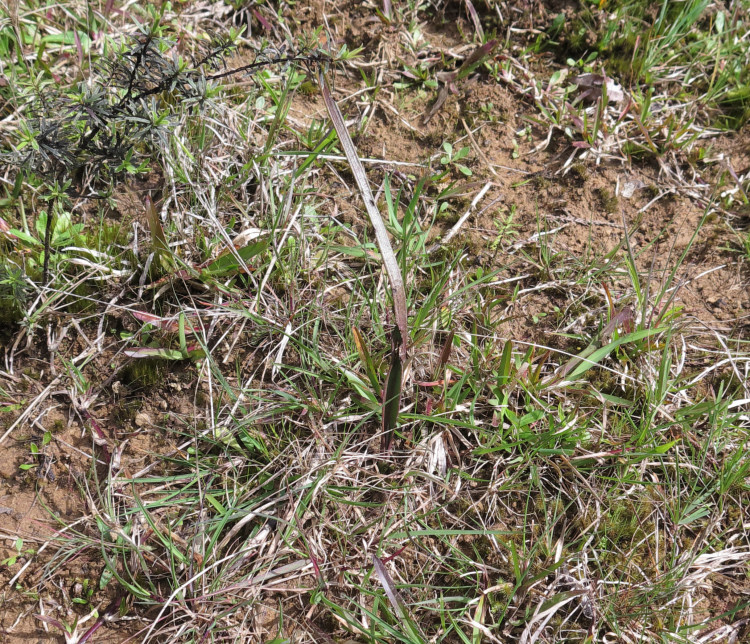 I noticed this Sun Orchid a few weeks ago, having seen its leaf amongst the grass in the open area between the first crossing and the Pines paddock.  Every time I move the cows though here I check to make sure it's still there, not eaten nor trampled.  So far so good.

Its flower spike is just visible in the base of the leaf.

In the photo below, this orchid is just out in front of Endberly's nose. 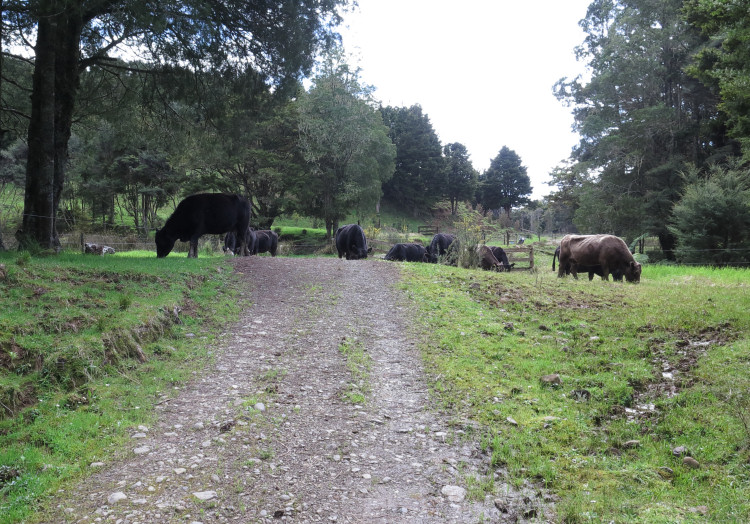 The mature cows are a bit lighter this year than last, when I had fed them slightly better than they really needed, compared with the rest of the herd.  They'll pick up again soon when the grass starts growing.

Endberly is about as I'd expect her to be - last year she was in the thin cow mob, but I figured she could join the cow mob this winter.

E rima tekau-mā-toru ōku tau.  At two o'clock, the time at which I was born, I went for a lovely massage.  Stephan dropped me there and went on to town for dinner supplies, returning in time to transport me home in a state of relaxed bliss.

Elizabeth joined us for birthday dinner, one of our four lovely roosters slow roasted, followed by apple & rhubarb crumble. 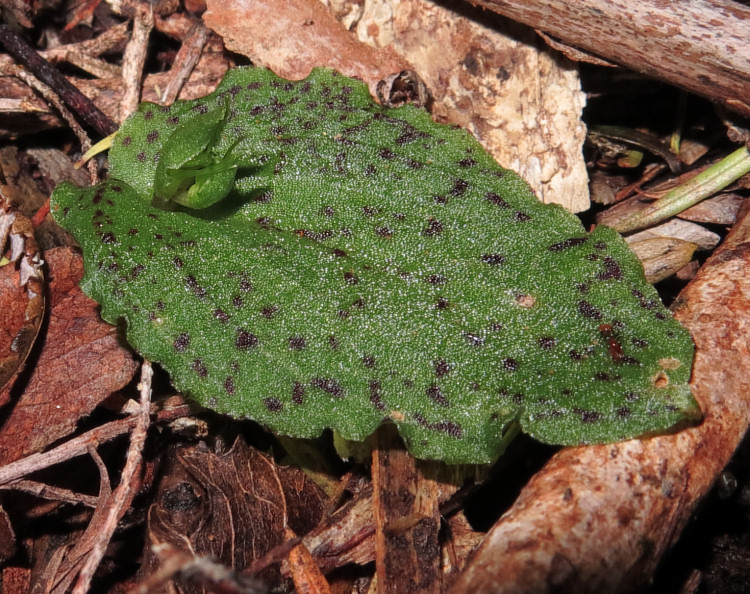 Back up to check the new orchid again.  I keep coming to look because I don't want to miss it flowering by forgetting to come for too long.

Stephan is doing real work while I'm swanning around looking at flowers: he's cutting again in the Pines paddock.

I did the first drafting for calving today, just one from each mob.  Eva is again really thin, so I wanted to start feeding her a bit more, along with providing daily molasses and Magnesium Oxide; from the cow mob I wanted Endberly, whose udder is changing quite quickly, more noticeably than the others and on my calving list, she's one of the first four due; and young Grey 807.

This year the calving cows and heifers are the daughters of 13 different sires.  There should be two calves from lovely Mr 87, one from bull 160, and the rest are by insemination, all but two from bulls I've not used previously.  I'm excited and nervous.  Will those bulls work well with my cows? 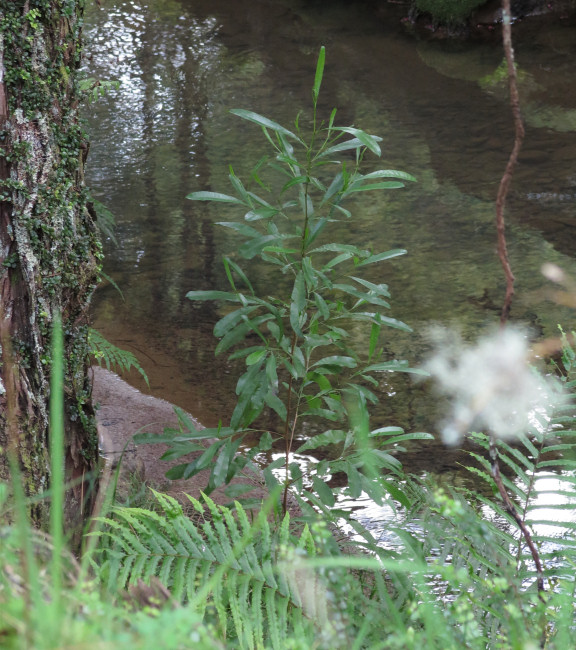 While I waited for Endberly to show up - she and a few others had been on the other side of the Pines swamp, so I left the gates set for them to come out whenever they worked out they needed to go up the hill and around - I went for a wander on the fenced stream bank.   Akeake saplings are growing in lots of places.  They must be another tasty species formerly always eaten by the cows, when the streams were accessible to the cattle. 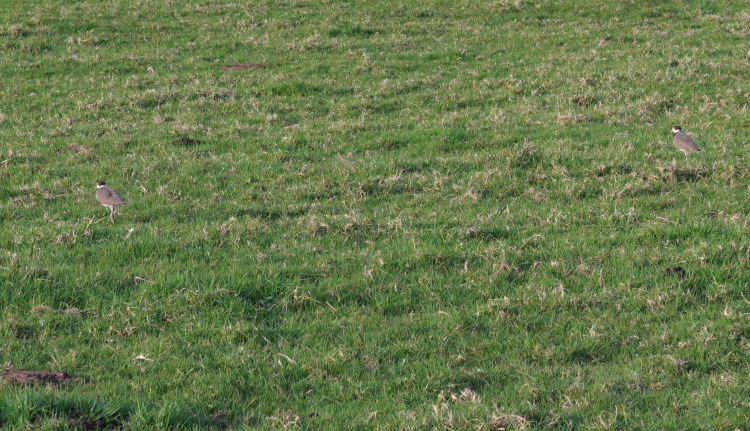 I have seen only two Plover chicks whenever I've noticed them lately.  They're now looking just like their parents, only a bit smaller.  I think they may now be almost able to fly.