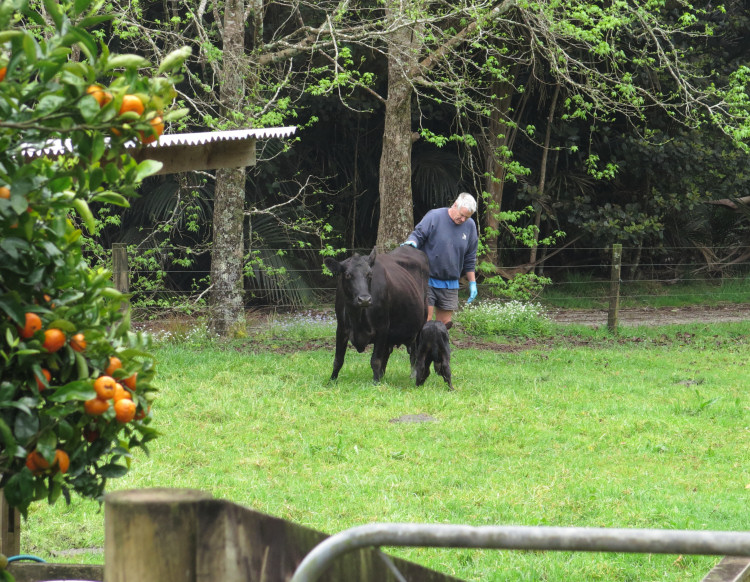 Negotiating share-milking with the calf, perhaps?

At this stage Stephan is milking Zella twice each day, since her calf couldn't possibly take all her milk. For the first few milkings we saved the colostrum and froze it in case of emergency need and since then, the milk is going into big buckets in the freezer for some pigs, if we manage to get some in a few weeks. Because we used a long-acting "dry cow" treatment to help keep Zella's udder free of mastitis (since she's proven susceptible), we have to milk her at least eight times before we can drink her milk. 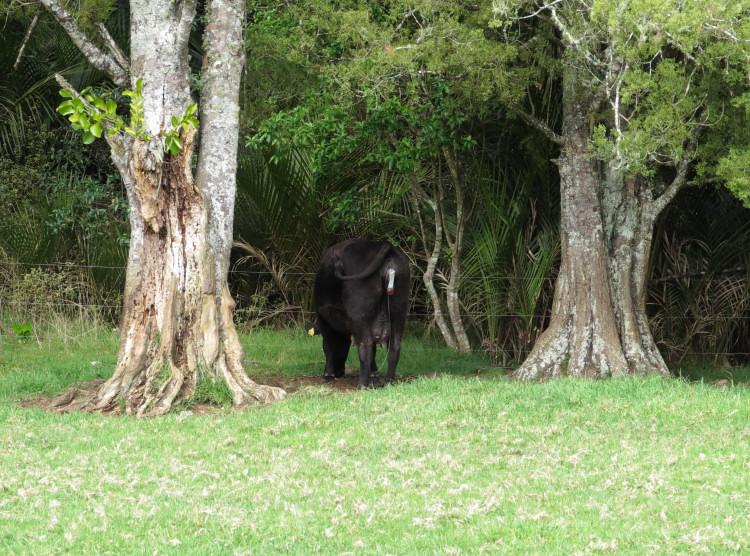 From the house this morning I watched three-year-old 811 come and stand at the fence and watch the calves in the next paddock. She stood for an hour at one stage, then went off into the trees at the bottom of Flat 2, appearing occasionally to eat some grass.

Two hours later I went out to see what might be happening and watched her for another hour before anything much did. It was more than another hour again before some feet (in this photo), to my great relief, appeared.

By then the sun was high and I was feeling quite hot, so moved to sit under the Puriri for some shade. I had beautiful company for a few minutes between watching this Kukupa and its two companions swooping around amongst the big trees. 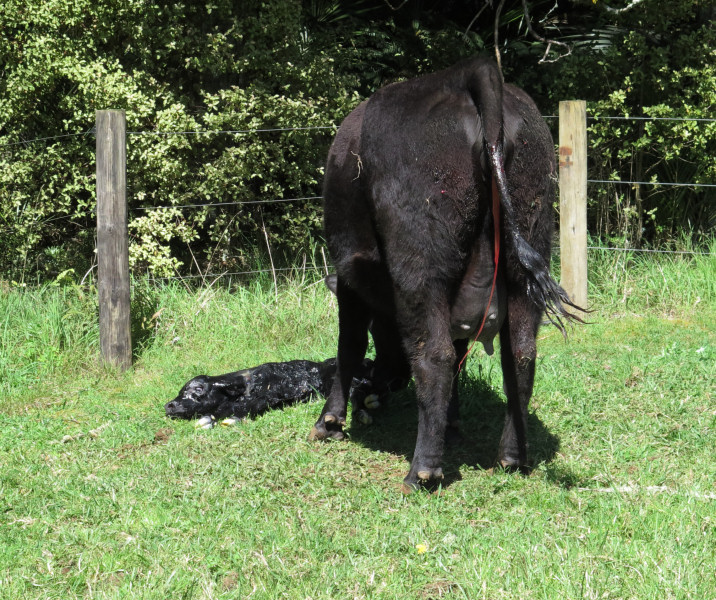 At 2.48, I had been watching 811 pushing to get the calf's head out for several minutes and decided I could resist no longer and went to help her a little. The calf was easily enough born: a bull.

Fortunately she was less perturbed by her baby than 812 had been! 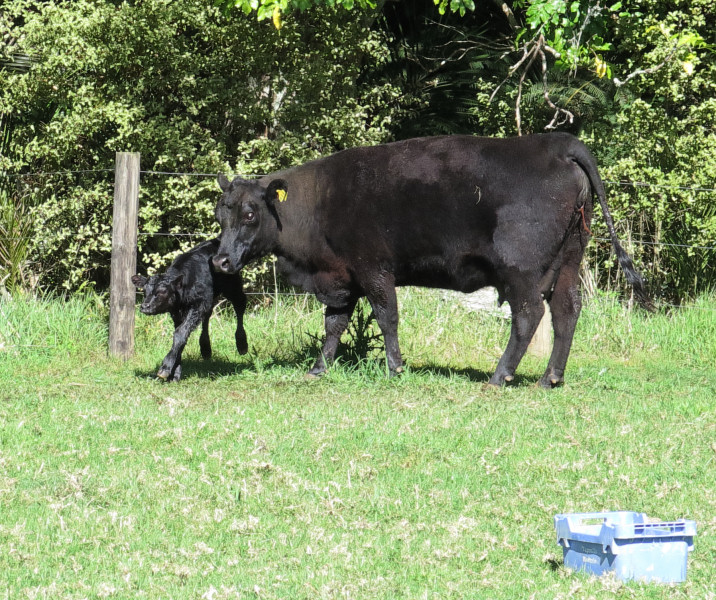 Just over an hour later I went back to check on them. 811 was closely following her calf's every move as he bounced circles around her.

Later I found her sitting, mooing, beside the fence, near where the calf had gone through the turned-off wires and snuggled down in some long grass for a sleep.

In the evening Stephan went out with the cross-bow to try and "discourage" some feral pigs I'd seen but they were back in Mushroom 1 with the cows when I checked at 9.45pm. I got almost close enough to have stabbed them with my steely knife, had I carried one!

Ida 145 was standing, not unusually, away from the others but her demeanour was such that I concluded she was in labour and I wasn't particularly comfortable about leaving them where they were with scavenging pigs wandering around, if a new calf was on the ground.

I opened the gates to 5d and they followed me there.

I went home for a hot bath on the deck, to soothe my still-aching back. Lovely!

At 11pm I could hear Ida calling, went to check and found heifer 813 harassing her, sniffing her rear and the ground where Ida's birth fluids had fallen and poor Ida, who's long been at the bottom of the herd's social order, was looking harried.

I found an electric tape and some standards and fenced off the top corner of the paddock where she was, so she could have some peaceful solitude.

Her calf was born at 11.40pm and with all looking ok, I went off to check white-faced 749, who was in labour over by the bush fence in 5c. As I was checking the young heifers (Zoom has been looking closer by the day), it sounded like all hell had broken out in 5d and when I got back there, the tape was on the ground and Ida was shoving her poor calf across the grass, bashing it over every time it tried to get up. I took the tape out of the way for safety and, trying to calm them down with soothing voice, withdrew again in the hope that things would settle.

749 wasn't doing anything very quickly when I was looking (I think she's always preferred birth privacy) and so I went back to see what was happening behind me. Ida was by then bellowing to her calf who'd been shoved through the fence into 5a and was making advances to a confused but willing Gina 142. I think the calf was feeding from her for a short while, which is not ideal, since her colostrum needs to be in her udder for when her own calf is born.

Ida's calf had also inexplicably changed sex from when I first saw it and thought it was a heifer: definitely a bull.

At this point I realised I needed help, so just after midnight, called Stephan on the radio and dragged him out of his warm sleep into the cold, dark paddock - actually not so dark, since the moon was bright, which always makes dealing with animals much easier than confusing torch light.

Stephan carried the calf back to Ida, who of course instantly shoved him back through the fence. But she began to settle a bit as the other cows moved away from her and, realising she needed to be on her own, we herded her and the calf into 5b and shut them in on their own.

From across the paddock by torch and binoculars a few minutes later, it looked very much like the calf was under her, feeding.

749 was licking her little calf clean and a bit later, when I shone the torch over there, I thought I saw a little white face. 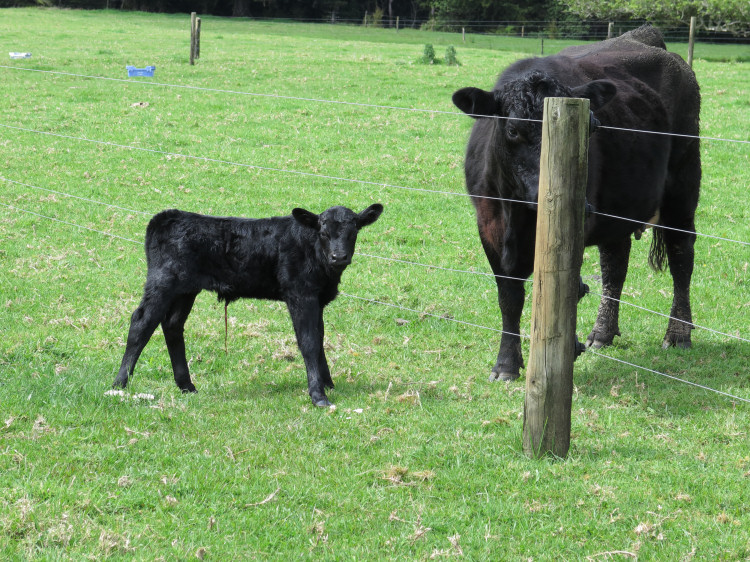 Things were a lot calmer this morning but Ida's calf was still on the wrong side of a fence. At least now he wasn't confused about who his mother is.

I found Ida's afterbirth in a tidy pile up by the gate. I carried it away to one of the reserve areas because otherwise hawks or seagulls would come to eat it and the cows get very upset about big birds coming near their new calves. Some of the cows eat every bit of afterbirth, so there's nothing to be found. Some try a bit and others don't bother with it at all. 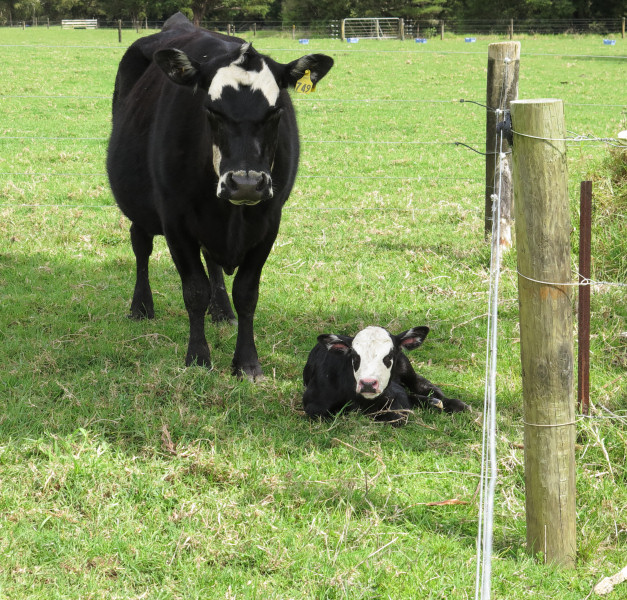 749's calf has a lovely facial pattern, with well-pigmented eyelids. Pink-skinned areas are prone to sun damage and can cause problems later, although noses seem less susceptible than eyelids, to cancerous responses to ultra-violet light damage. 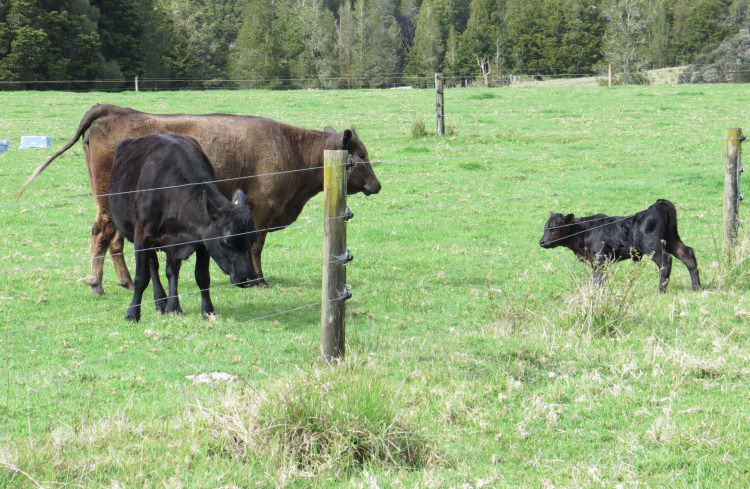 The calves are wandering at will from paddock to paddock, going under the turned-off bottom wires of the fences. Once the last calf is born, I'll turn the bottom wires back on. It's easier to deal with calves who can wander freely (and don't go far anyway), than calves who get a horrible shock on their accidental way through a fence and then won't go near it again to return to their mothers.

Fancy 126 is the turning cow in the foreground. I thought a lot about her today, a month since she delivered her dead calf, who would have been born about now. 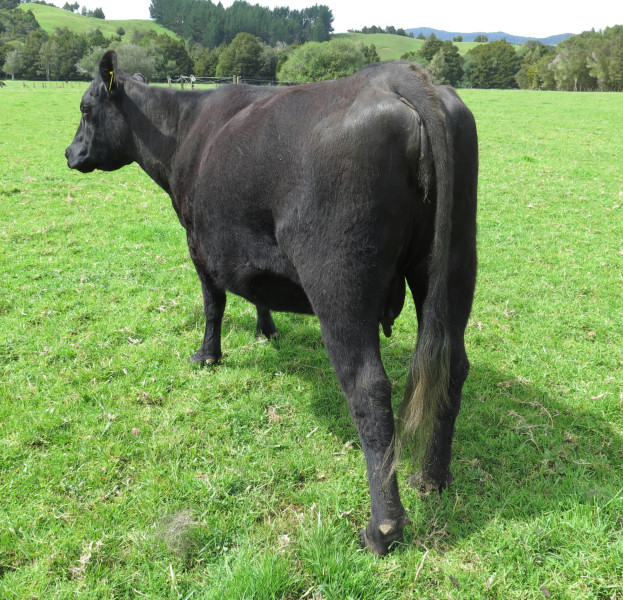 On these occasional warm and sunny days, it's lovely being out amongst the cows, today with the grooming brush, making some of them look a bit less messy. This is Henrietta 141.

I've been hearing the Pīpīwharauroa (Shining Cuckoo), the migrating harbinger of spring, since about last Thursday. 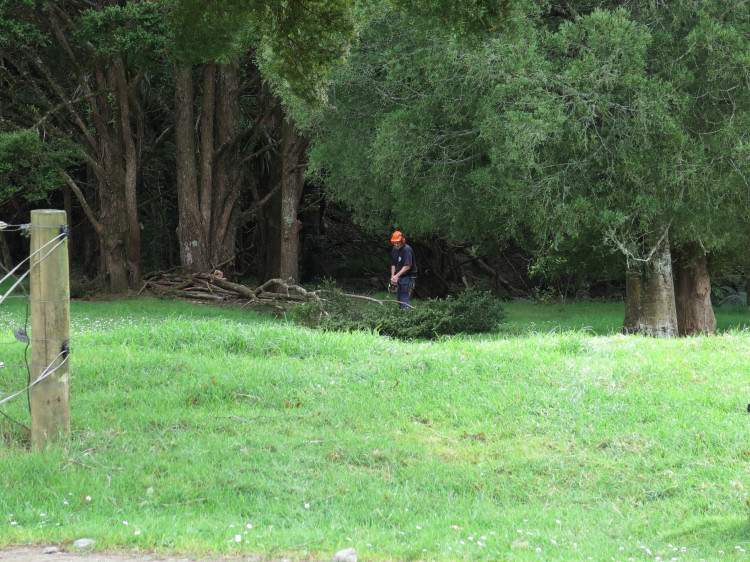 Now there are calves again on the farm, the holes in the top end of the Windmill paddock must be addressed. Stephan started with some Tōtara pruning, where he wanted to bring the altered fence past one of the big trees. 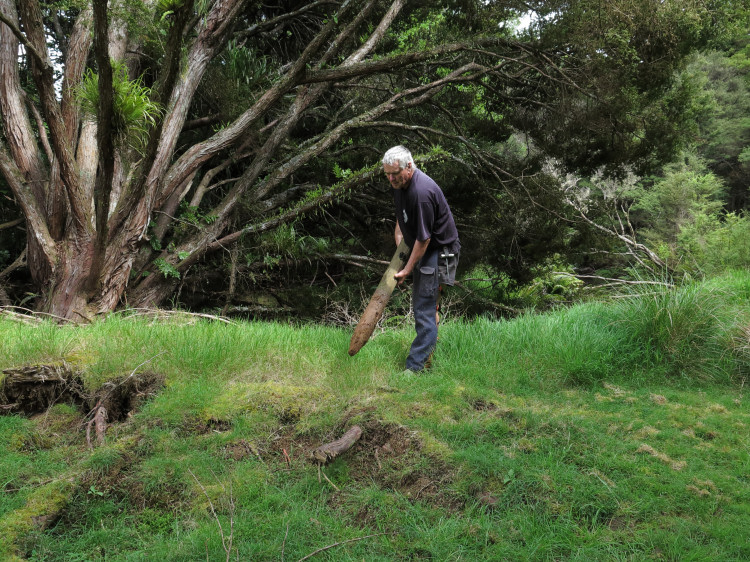 Removing the post that had gone over with the falling tree was an easy job.

Electric fencing is so useful in this way: when a fence needs to be moved, it's a fairly simple task. 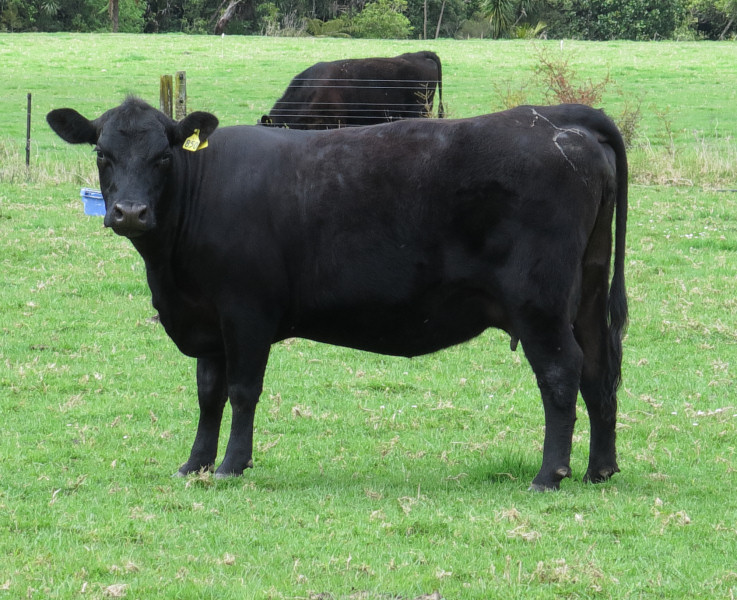 In my calving-date calculation spreadsheet, I'm expecting Zoom to calve on the 21st, but I don't think she's going to wait that long.

While I was doing some more cow-brushing in Flat 2, I kept hearing this Skylark and eventually saw where it was, as it flew from one fence post to another nearby. I suspect it has a nest somewhere in the grass where I was standing. 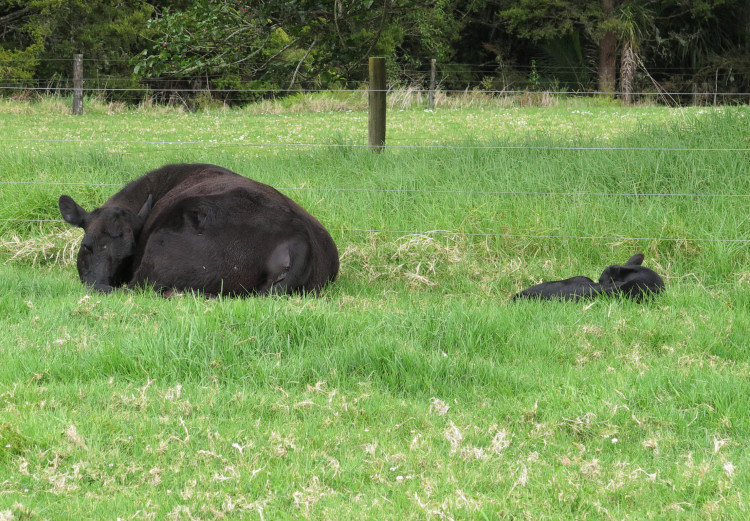 Down the paddock under one of the big Puriri trees, 811 was fast asleep - at least I hoped she was just asleep. Usually you'll see an ear twitch or some sign of life, but she was deeply asleep and so I took a picture and crept away again. Yesterday's work must have tired her out. 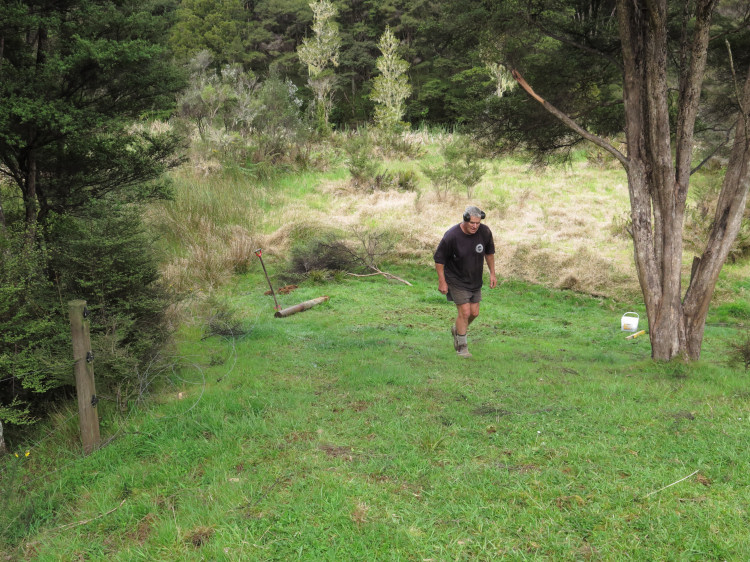 After completing the Windmill fence alteration, Stephan went out to the Swamp paddock to move the fence there, where the swamp's wetness had crept into an area we'd kept as paddock.

Because no animals now pug around in the swamp grazing the grass, the water flow has slowed and its level has risen a little. 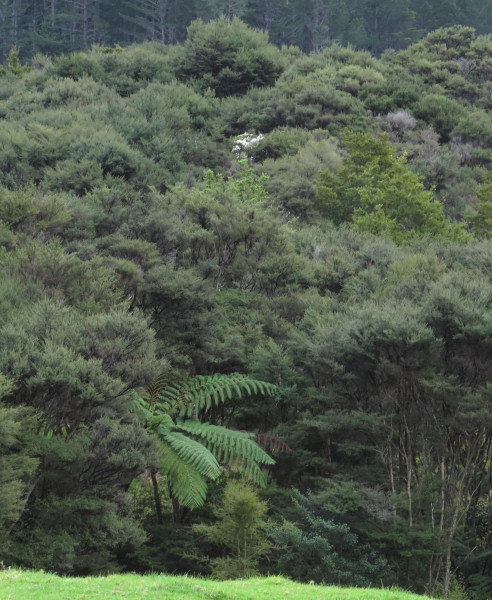 As I walked away from where Stephan was working, I saw a blooming Clematis vine, presumably growing on a steep bit of the Spring paddock, just up from the trough.

Our plan is to fence that steep little slope, so whichever tree it grows on won't be cut; but I'll go and check anyway, in case it's at the edge of the area. 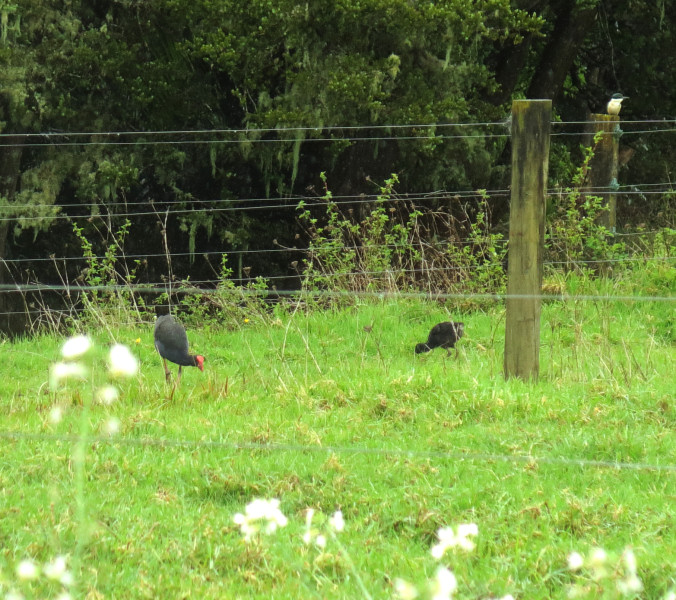 Of the five Pukeko chicks brought to our garden six weeks ago, only one remains, still being attended by three adults.

Little calves are often difficult to find, like the left-most animal of the four in this picture, tucked away in some rushes, plants that don't look like they'd hide anything of substance.

If you can't see it, it's between the first and second posts from the left.