We had a great day of learning and practice today during our one full day at Kareponia Marae.  We're now onto sentences to establish whose it is, who's it for, who has it, with all the surrounding grammar to indicate singular, dual and plural in the things and the people under discussion.  I'm loving it all.  Both of us are really enjoying being part of such a fabulous group of people.

Over the last week or two I've started experiencing hot flushes, a burning, intense sensation starting somewhere between my shoulder blades, building before I'm quite aware of it until suddenly I have to strip off as many layers of clothing as is decent, to cool down again.  Someone said it's better during winter because you can get cool easily but I'm not convinced: it would be easier if I wasn't wearing as many clothes to keep warm and if the air temperatures weren't so cold.  Hopefully I won't get to test my theory next summer.

After helping clean up the marae, we came home in time for a late-morning coffee. 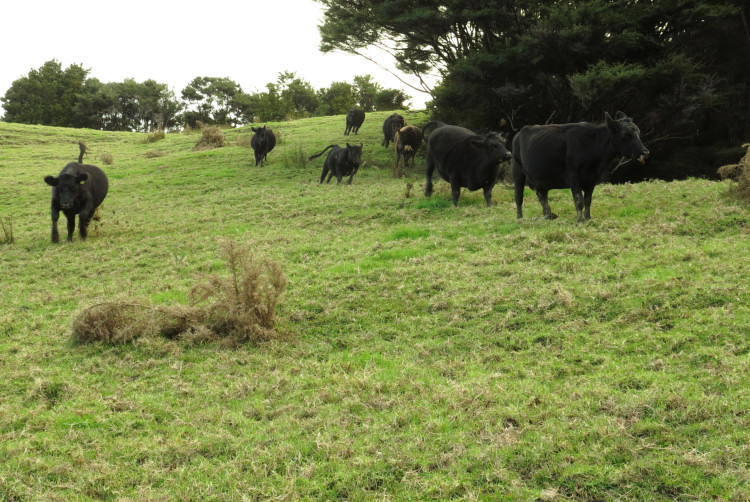 In the afternoon I went out to see the cows, calves and yearlings, then called them to follow me out of the Spring paddock.  Many of them arrived in a rush.

When they followed me down to the gate to the stream crossing, I held my arms above my head, to make sure they saw me as they ran down that slope.  They're so big and heavy that if one following another didn't see me and was unable to avoid me, I'd be seriously injured, or worse. 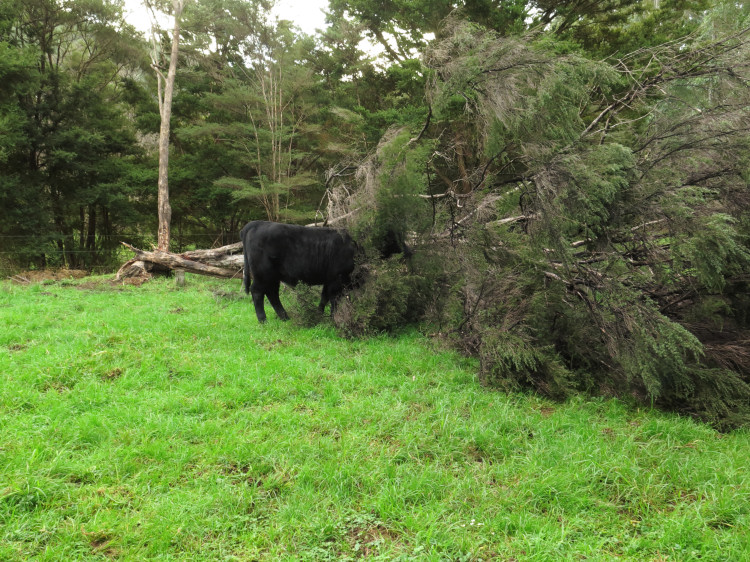 Across the stream in the Back Barn paddock (the barn would have stood at the base of the tree - there's a square building pile just to the right of where the tree trunk has snapped), the calves were delighted by the fallen tree's foliage and burrowed their way into it, rubbing their heads and necks. 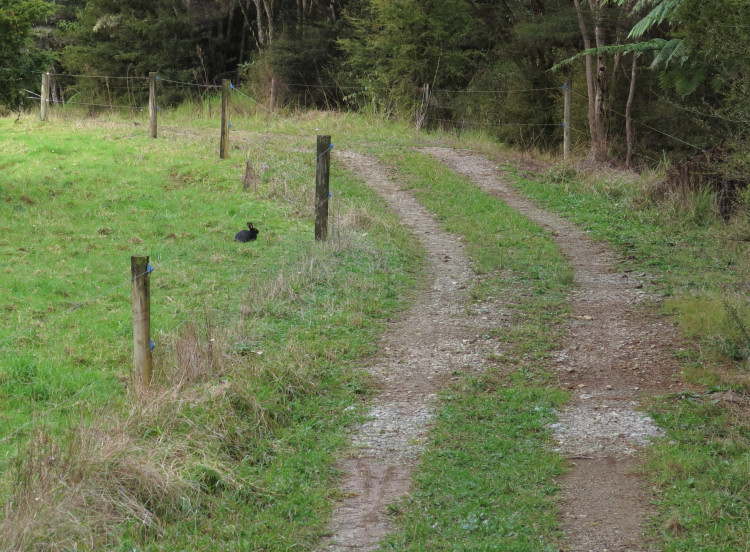 There is a black rabbit living near the Back Barn paddock.  Today it didn't see me before I stopped to take a picture.  Its habit is to dash across the track and into the long grass in the river-bank reserve. 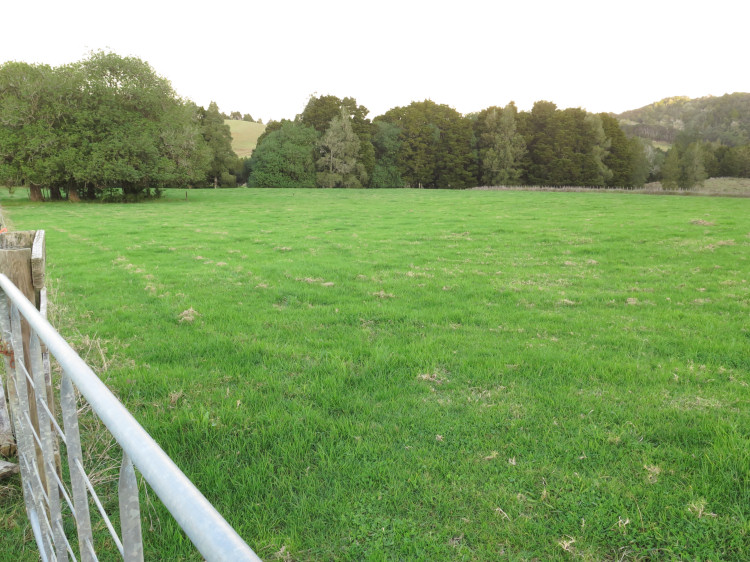 Flat 4, mown by Stephan four weeks ago, is starting to look really good.  Unfortunately he didn't have time to mow any other paddocks this autumn. 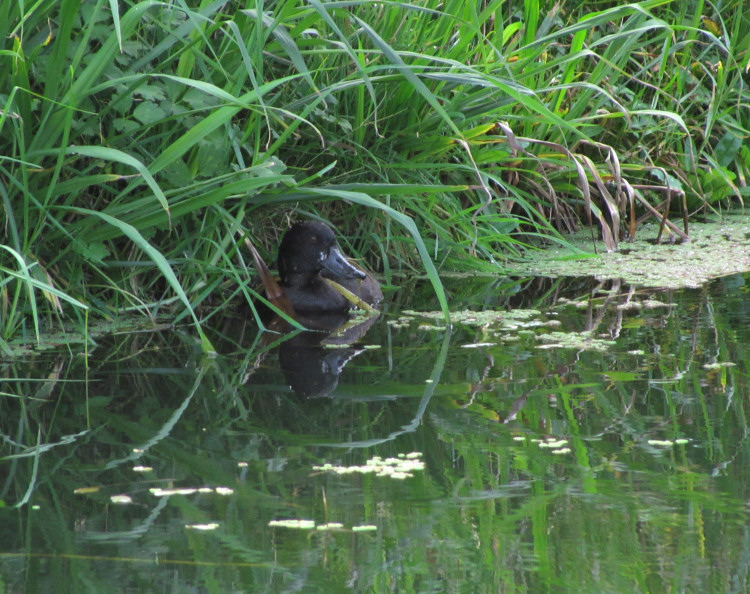 I was on the phone with Christina this morning and looking down at the pond, glimpsed a flash of what I presumed was a shag, diving to feed.  But unlike a shag, which generally swims underwater for some distance before emerging again, this bird came up very close to where it had gone under.

I found the binoculars and saw it was a duck.  I did an internet search on diving black duck nz and as I had suspected, came up with the Scaup, the only native diving duck.

I've never seen one here before! 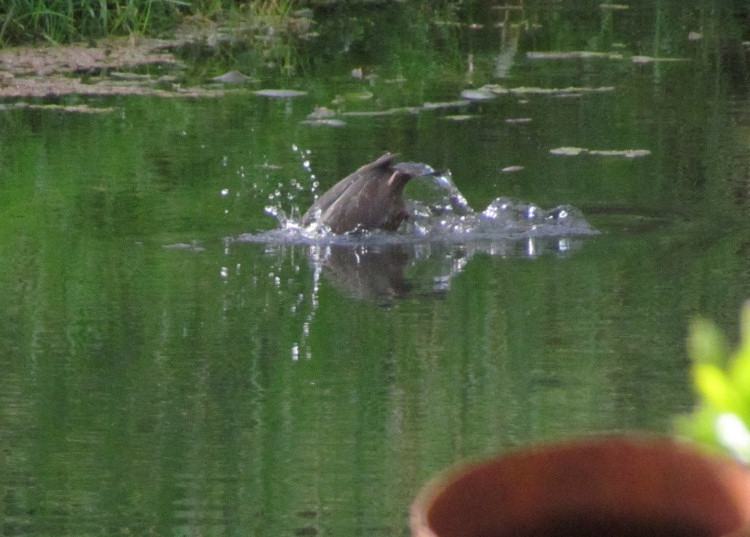 I watched her for some time, taking pictures with Jude's ultra-zoom camera. 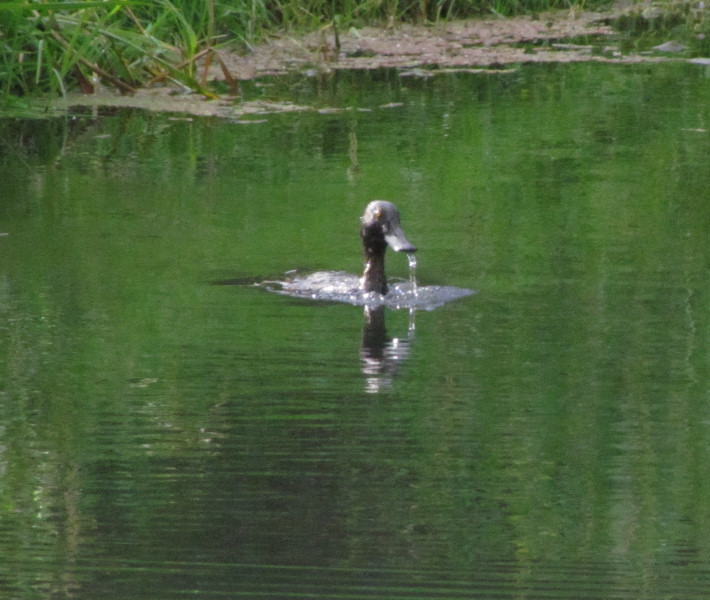 ... before popping back up out of the water to shake herself dry, ... 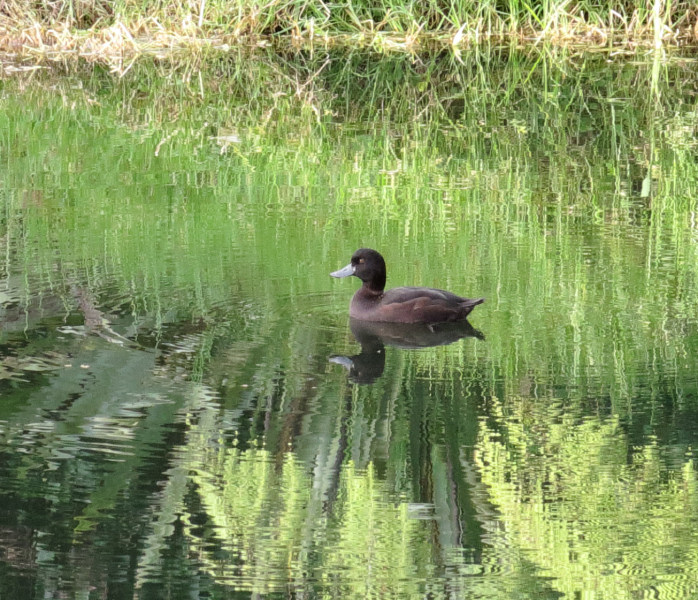 ... and floating around in a picturesque manner.

Kevin Matthews tells me they're present on the dune lakes north of here, although not as common as they once were.  I think I first saw Scaup in Queenstown, on Wakatipu, when we were holidaying in 2012.

I wonder why she's here and alone?  Will she stay?  Will she invite her friends and family to join her?  What does a duck invitation look like and how is it transmitted?

Today we had our triennial TB test.  We only have to present those animals older than 24 months, so the bulls didn't have to come in.

We got up early to process yesterday's milk (we've been freezing it for a couple of weeks, storing it for Zella's dry period), milk Zella and process the fresh bucket-full, then I went out to get the big mob in to the yards and then the weaned cows.

Zella and Glia waited in the crush pen ready to go up the race and I drafted the yearlings and calves from the older animals ready to come up next. 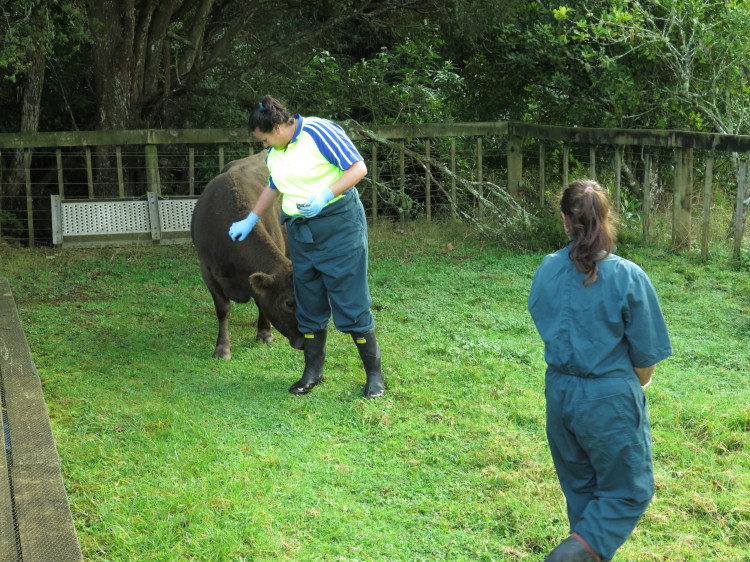 After injecting Zella and Glia with the tiny tuberculin injection in the fold of skin beside their tails, Rachel spent some time being charmed by Glia, until we had the next race of cows ready for her. 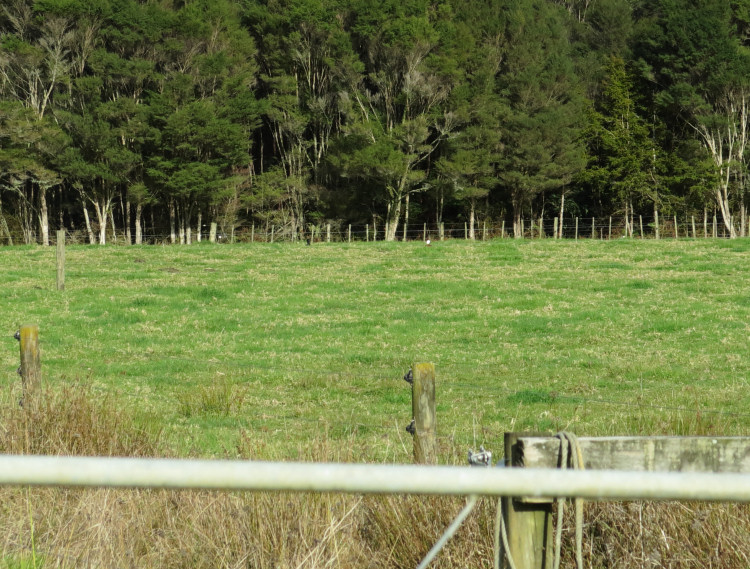 When taking the cows back out, I heard a female Putangitangi (Paradise Duck) and looked around to see where she was: her head is the white spot in the photo, where she and her partner (whose black head is visible seven battens/post to the left) were sitting in Flat 5b. 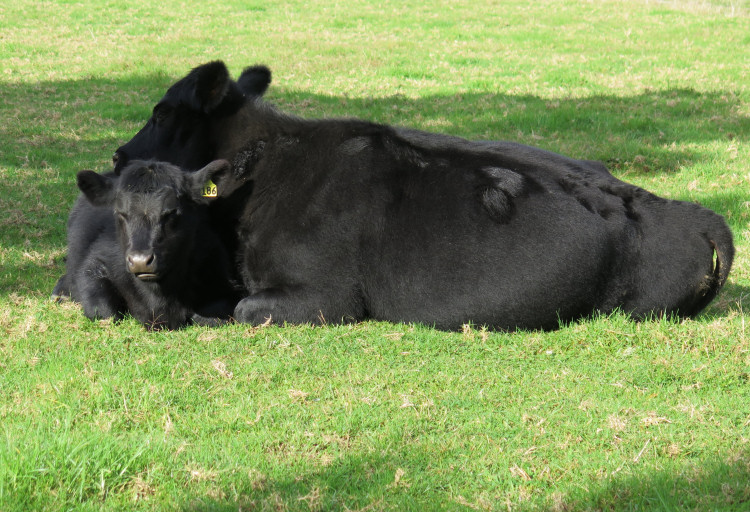 After lunch I walked out to push the weaned cows, who I'd left to make their way along the lanes and hadn't gone far enough, out to the Pines.

I wandered quietly through the cows and calves on the way back.

Here are Ellie 119 and her daughter. 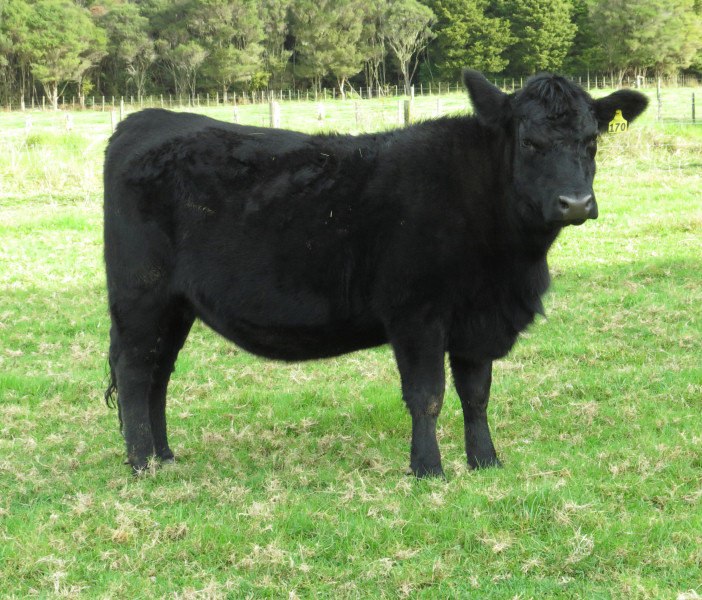 Dushi, with whom I'm very pleased.  She appears to be continuing to grow into a very nice animal.

Rachel came back to read the TB test this morning - by feeling for reactive bumps where she injected them the other day.  All clear, as expected and as usual.  It would be a horrible thing to have one react, since that would mean complicated things for the whole herd.  I hope we never have to find out what would actually happen next in that case.

We spent some time talking about animal welfare and Rachel's work as an advocate for the poorly-treated animals she comes in contact with in the course of her work.  It's a tough position to take, standing up against men (almost exclusively) who maltreat the animals from which they make their living.  It's also a lonely job, in a community where standing up and saying NO to bad behaviour is regularly punished by ostracisation and bullying.  Knowing what that feels like, we assured her that we are willing to support her work in any way we can.  Writing reports is not Rachel's favourite occupation but it's certainly a way in which I might be able to help her.

If you ever find yourself with an urge to send someone something to make their day brighter, I'd nominate Rachel as a deserving recipient.  You'd find her at Far North Vets in Kaitaia. 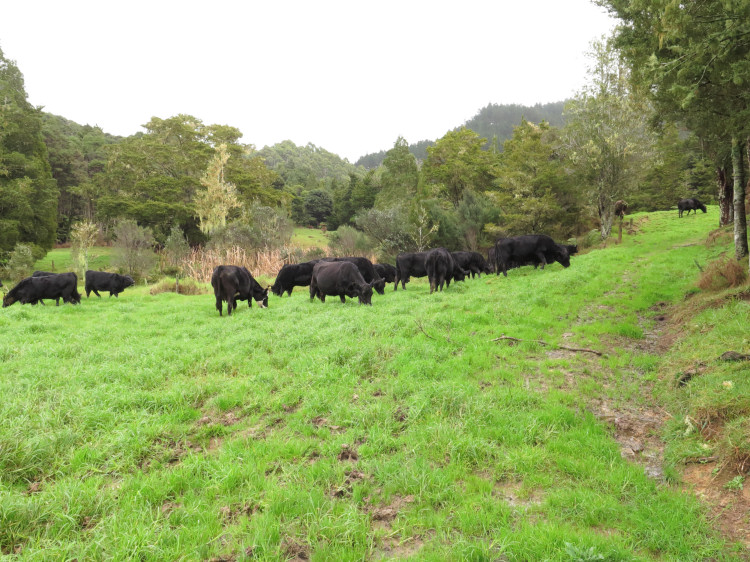 I took the cows and calves out to the Big Back North.  There's still quite a lot of grass around, which is a good thing for late June.