The week beginning the 1st of June 2019.
Saturday the 1st 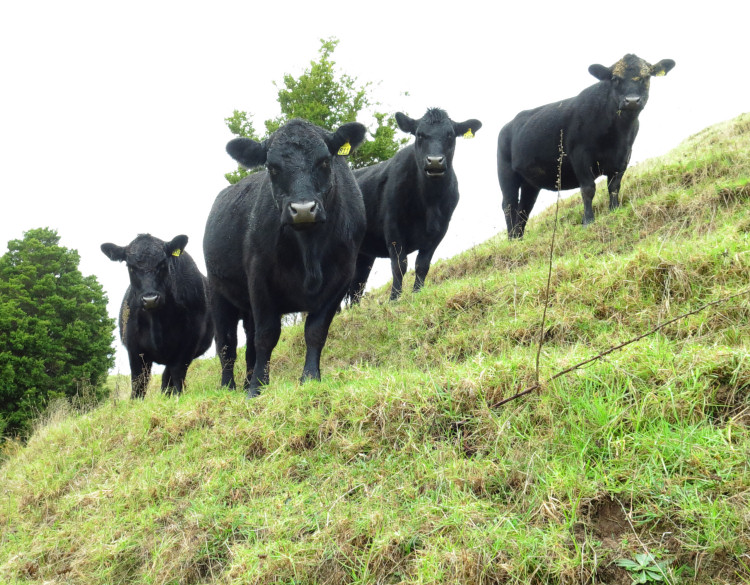 I climbed the hill to check everyone in the big mob was there and happy, saw how much of the grass they'd eaten, so opened up the other, larger part of the hill for them. 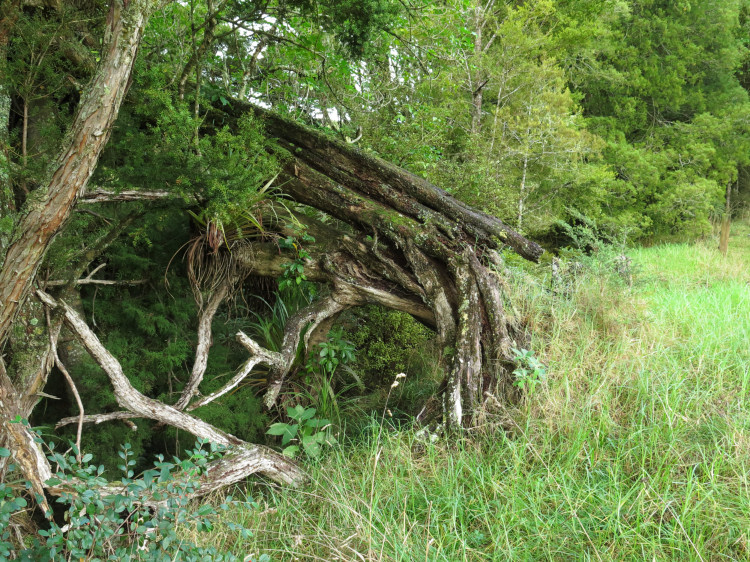 As we've not been over here for a few weeks and there have been some strong winds, I walked the perimeter of the paddock, checking all the fences.

This is a Puriri I feared might fall on someone and was relieved when it was fenced into the gully reserve between the two hill paddocks, where it has now toppled over into the tops of the other trees.

Looking back through earlier pages, I see it had another precarious part that we had to remove before the fence was built.  We forget so much. 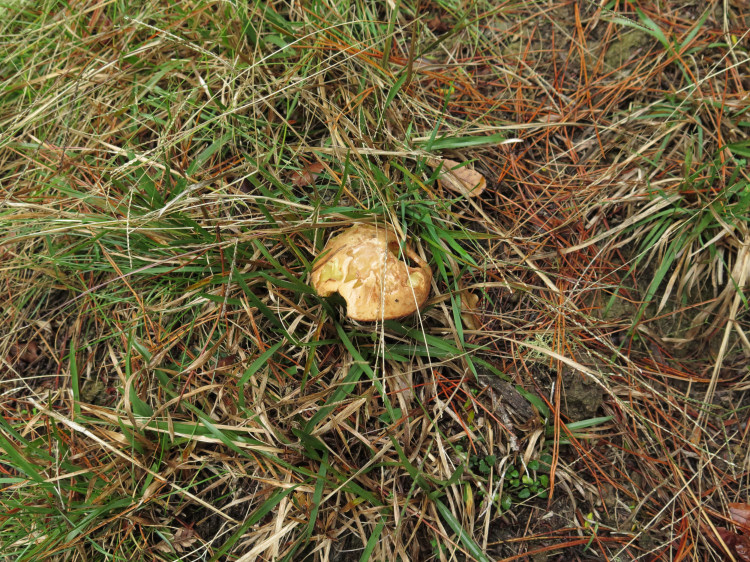 Further up the hill, some fungi in the grass... 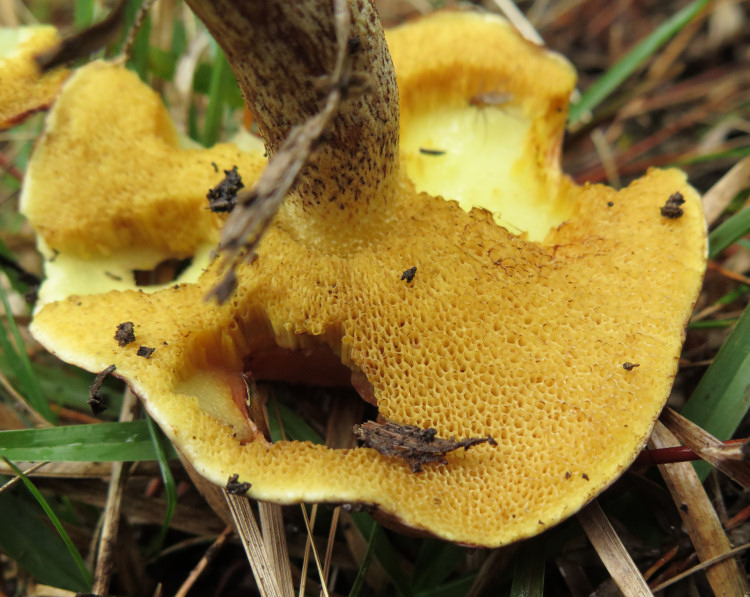 With very attractive undersides.  Obviously also very tasty for someone. 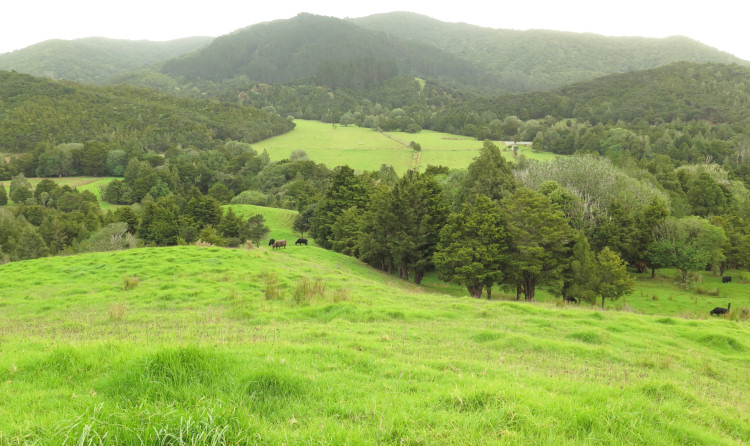 There's a great deal of grass on this hill! 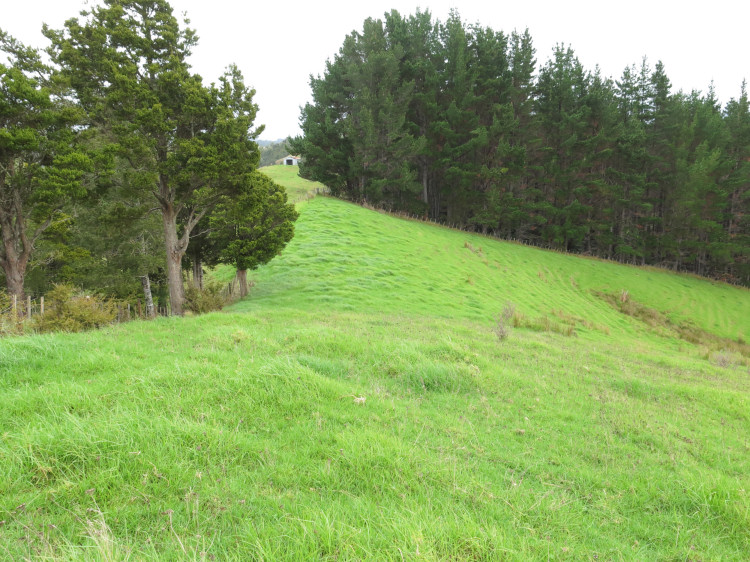 Over in the corner, sheltered from the winds by those pine trees on the neighbour's place and warmed by the afternoon sunshine, the Kikuyu looks like it's starting to fall over on itself.  The animals will be very happy here. 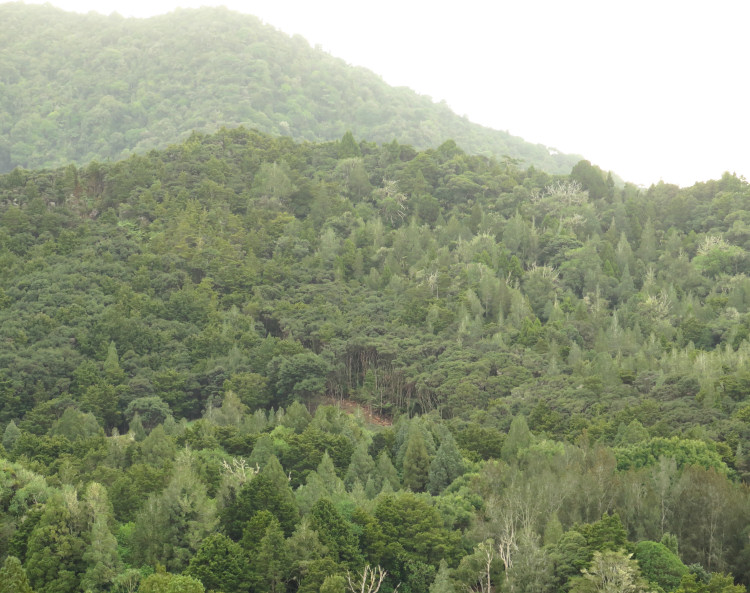 I've been thinking lately that the British settlers here were an interesting people, believing they should march in and tame this wild land.  Looking at forest like that to the right, I see extreme beauty; I guess they wanted to see grass and sheep.

That mature-tree area is part of a QEII Covenant on Arthur and Sandra Taylor's block next door and has thus been protected for decades.  It has the appearance of original forest, where the area to the left is primarily regenerating Kānuka and Tōtara.

In the middle of the photo, toward the bottom, is the cutting up the edge of our Tank paddock, where Stephan has been replacing the boundary fence.  Since it was cleared, we'll carry on.  There is grass this side of the fence clearing. 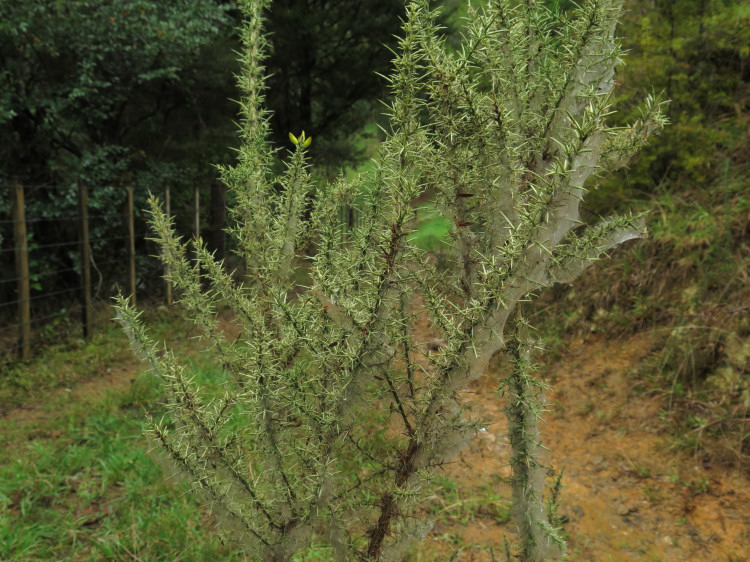 I walked back down to the road gate past this anaemic-looking gorse bush all covered in spider-mite webbing.  It's good to see the little fighters are still around. 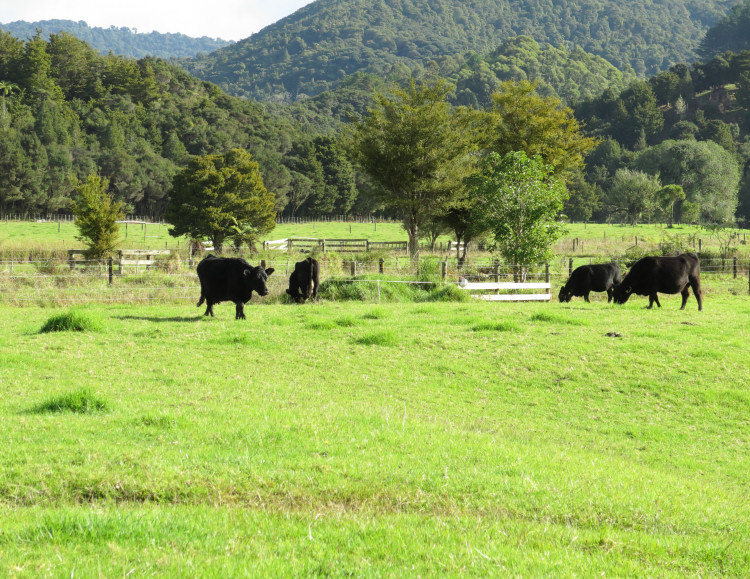 I brought the weaned cows down to the House paddock this afternoon and by the time I'd gone inside and looked out the window at them, 746 was on her knees eating the grass growing on Demelza's grave. 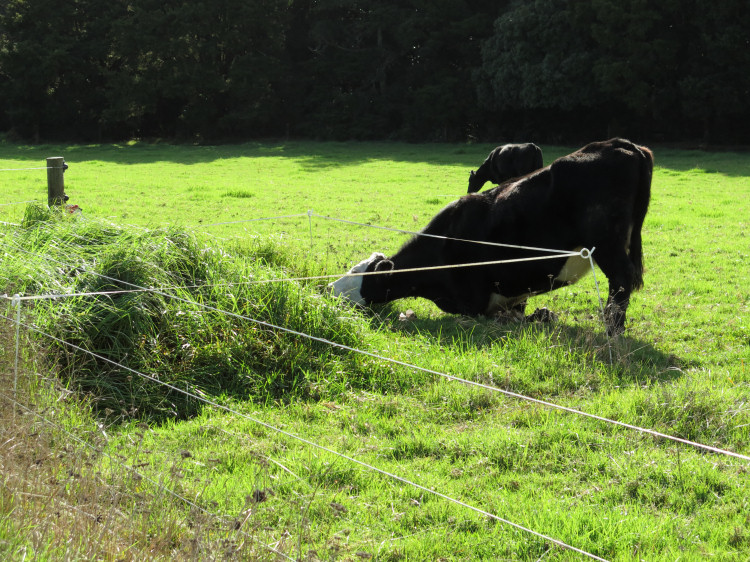 I wonder if she thinks she's just that little bit cleverer than everyone else?

Queen's Birthday is a public holiday, so Mathew, Raewyn, Sean and Zandor came out for the day.

Mathew and Zandor got on with helping Stephan clear away the old fence between Jane's block and that of Sandra Taylor next door.  Sandra's grandson, the rude young man with the expletive-shouting young partner, whose dogs and calves strayed all over the neighbourhood last year, have, thankfully, gone away.  The young man was full of bravado and promises about building the fence but was never actually going to do it.  So Stephan will, with as much help as he can muster from others with any connection to the task.  No fencing contractor would touch this boundary replacement through this bush: it's too much hard work, would cost too much. 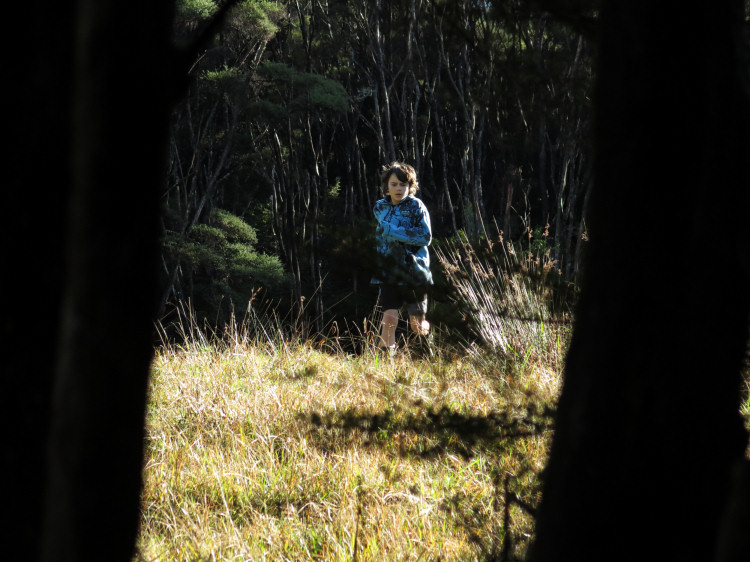 Raewyn, Sean and I went wandering through Jane's block of reserve bush, heading toward the end where Stephan had asked us to go and check the live capture trap up the fenceline in the Tank paddock.

When we reached the boundary, I let Sean through the electric wires and sent him up the hill to check the trap.  I photographed him as he ran back down toward us. 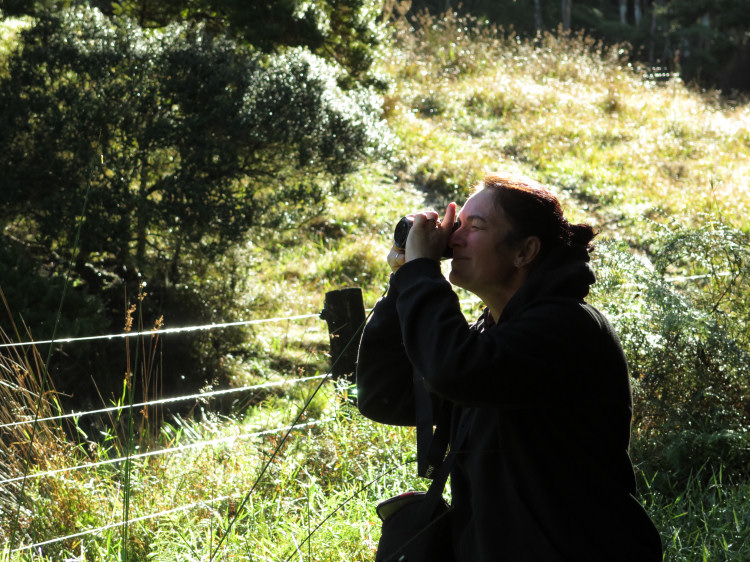 Raewyn spotted a tiny caterpillar, hanging in the sunshine from its silken thread.  It is in the picture if you look carefully. 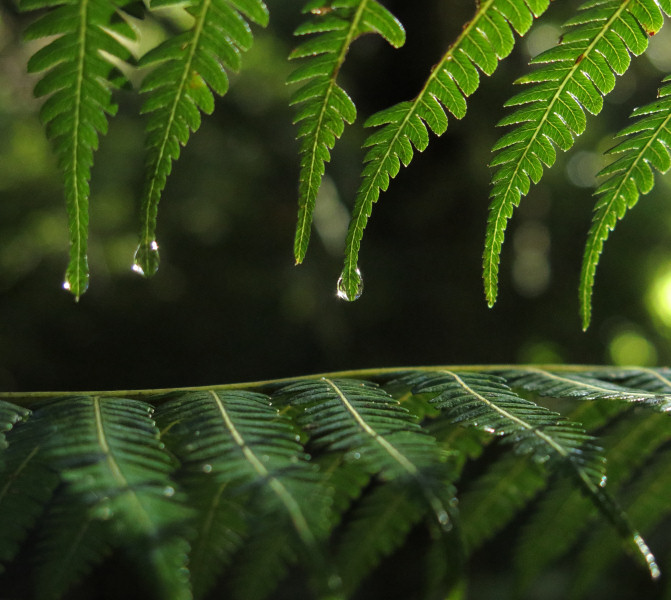 We both found beautiful things to photograph as we made our way back through the bush toward the sounds of the workers. 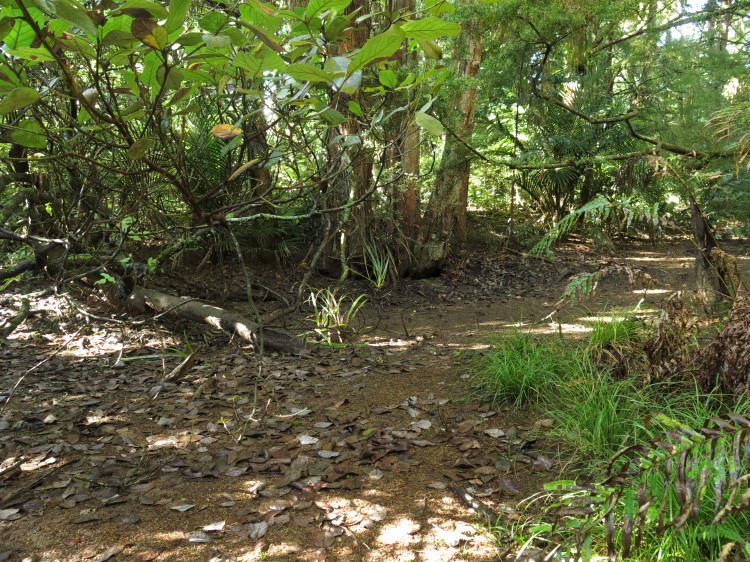 This is obviously an occasional streambed.

I've not been in here when there's been water here and I'm not sufficiently familiar with this area to understand where the water comes in and where it flows out again.  More exploration required!

While working without his protective visor down, Stephan got poked in the face by a bit of sharp wood.  Fortunately, again, he has had a near-miss, not a total disaster.  He has a puncture wound in his lower eyelid and managed to slice into a bit of the membrane in the inner corner of his eye.  I sent a picture off to nephew Nick, who's an eye-guy and he reassured me that it should heal well on its own, so there'll be no emergency trip to somewhere afar tomorrow.

We have had another "serious warning" discussion: people who ignore such near-miss events eventually end up dead or seriously disabled.

I spent the rest of the week telling people Stephan had annoyed me so I'd poked him in the eye with a sharp stick. 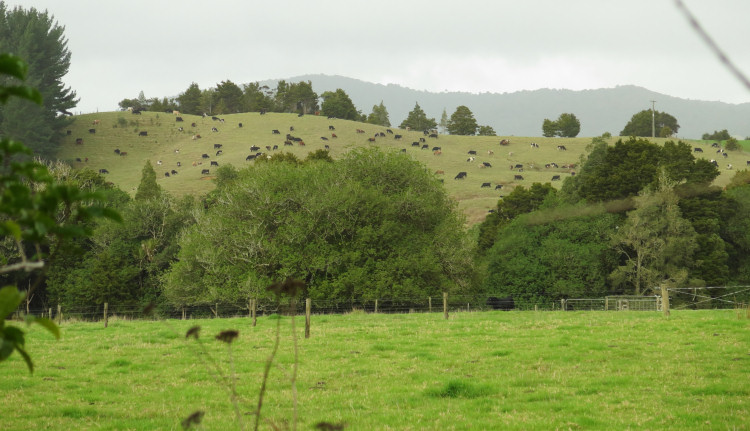 Yesterday that big mob of cows was walked up our road from the nearby dairy farm.  There was shit everywhere.  It must be extremely irritating to anyone with a new, clean car!  Cowshit is corrosive and stinky.

From our point of view the major concern is biosecurity: any vehicle coming in our gateway will carry some of that stuff in to us.  But also, our cows are over the road at present and I'm going to have to bring them back across in the next day or two, probably about the same time that mob gets walked back down the road.

Stephan rang their owner to check when he'd be moving them back, so we can get ours across the road first.  In the mean time there's been a lot of rain and traffic and so the visible manure has dispersed.  But if water killed bacteria, this would be a safer world to live in and it isn't; so I remain concerned about what that herd might carry that my cows don't and could contract.  The risk is primarily because the cattle walk on what they eat, so bacteria they pick up on and in their feet end up on their dinner plate.  There are also diseases of the feet that cause tremendous discomfort for cattle and hassle for us if we have to manage such afflictions.  Hopefully the risk is low but that's all it is: hope. 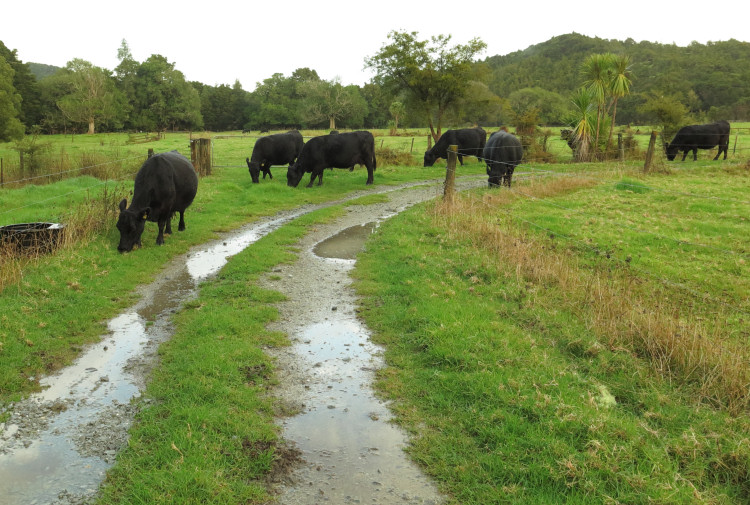 These are the weaned cows who I'd let out of the House paddock and sent off along the lanes earlier in the day but they'd turned around at the top of the Windmill lane and come all the way back down.

I walked out to meet them, propelled them back up the lane and on into Mushroom 2. 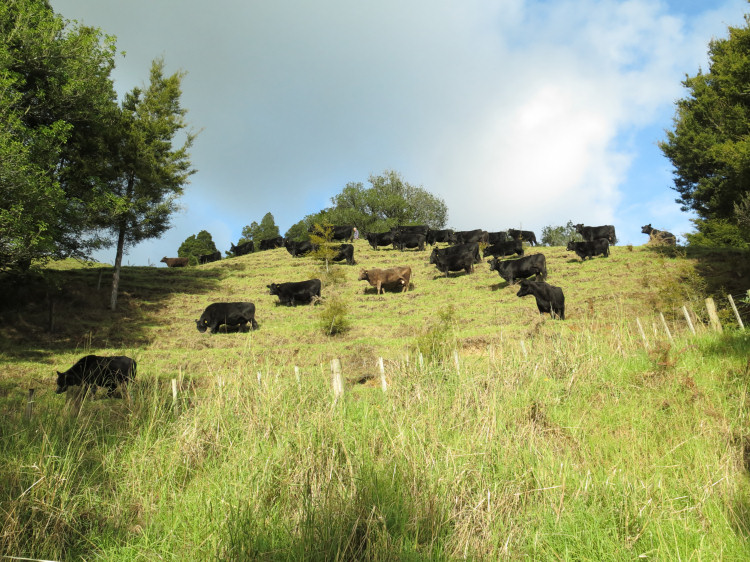 The dairy farmer having said he'd move his cows back tomorrow (he didn't do it until Saturday), we went to bring ours down and over the road this morning. 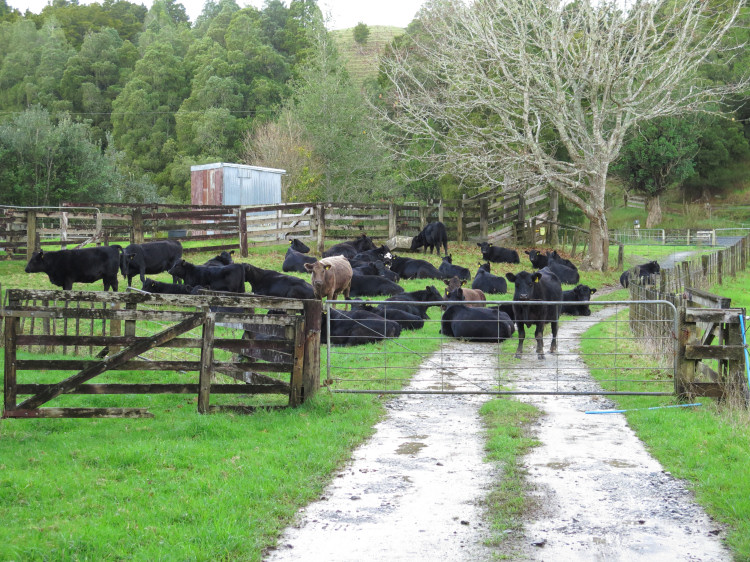 We went back to the house for coffee, then lunch while the cattle cleaned up the grass in the little yard and by the time I came back to open the gate, they'd all sat down for a rest.

Next there's a picture of a dead cat.  If you don't want to see it, don't click on the button. 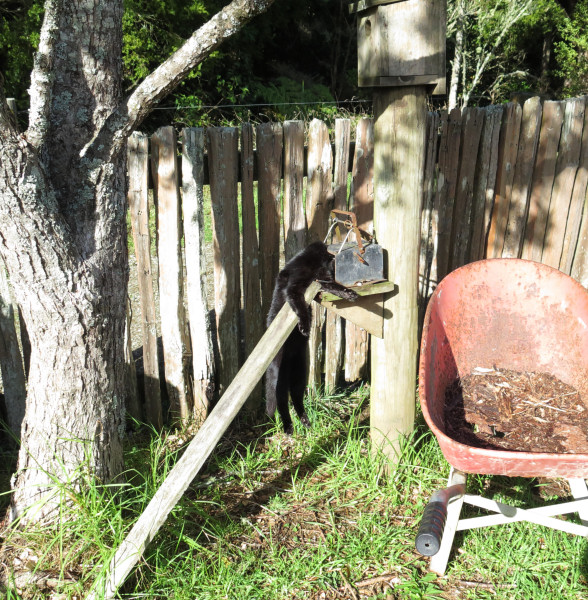 Another cat!  This is a Steve Allan trap for possums and cats and they're easy to set, humane and obviously very effective with a bit of smoked fish inside.

This is cat number five for the year.

Please desex your cats, wherever you live! 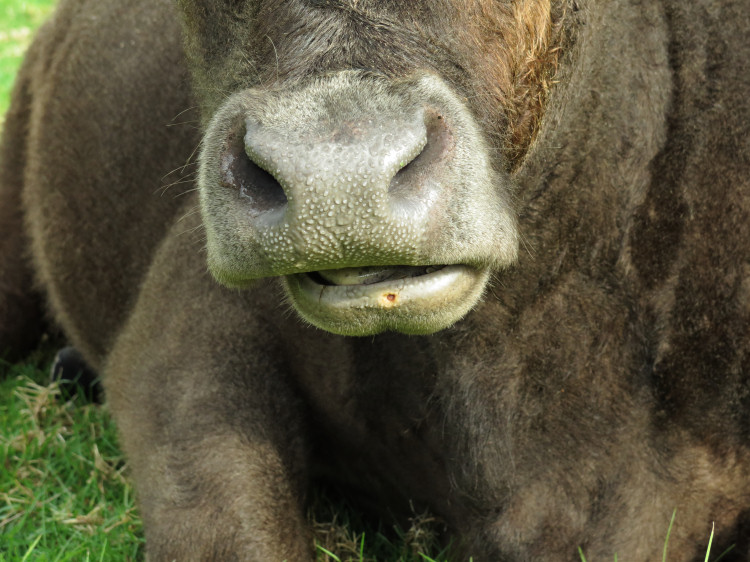 We need our nice new head-bail installed.  Glia has had a spot on her lip for a while now and we need to have a close look at it - she won't let me hold her head or feel her lip.  It looks like an erosion, so perhaps there's something in her lip that needs to be got out so it can heal.  She's not bothered by it but I'm concerned it's been there for some time and hasn't healed. 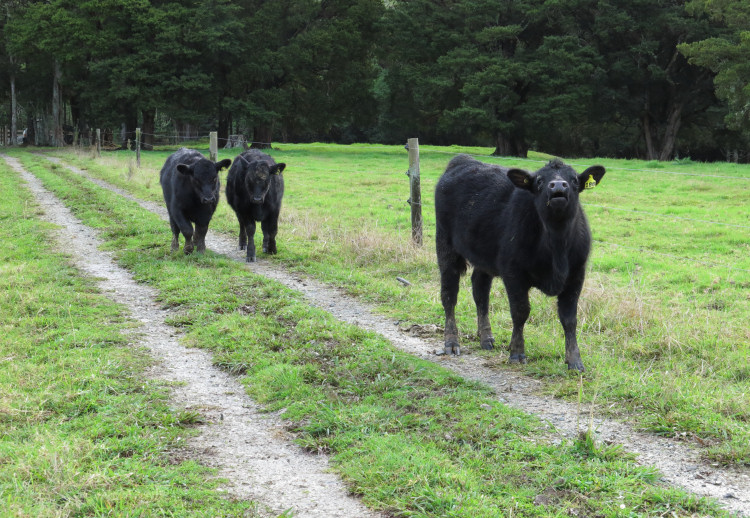 It was a squally, cold day today!  Winter has suddenly begun this week, after an extremely mild May.

I brought the big mob out of the PW and down along the lane to Flat 2 and these three calves were the last of the mob to come, calling because they'd lost track of their mothers.

In front is Fancy 166's daughter and the other two are the steer, 861 on the left and Harriet, Endberly's daughter. 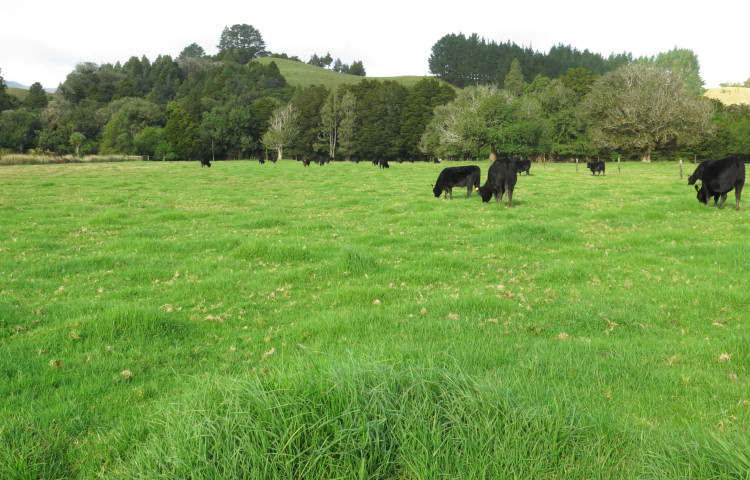 While the temperatures have cooled noticeably, we've fortunately not had any frosts yet, so the Kikuyu is still green and growing. 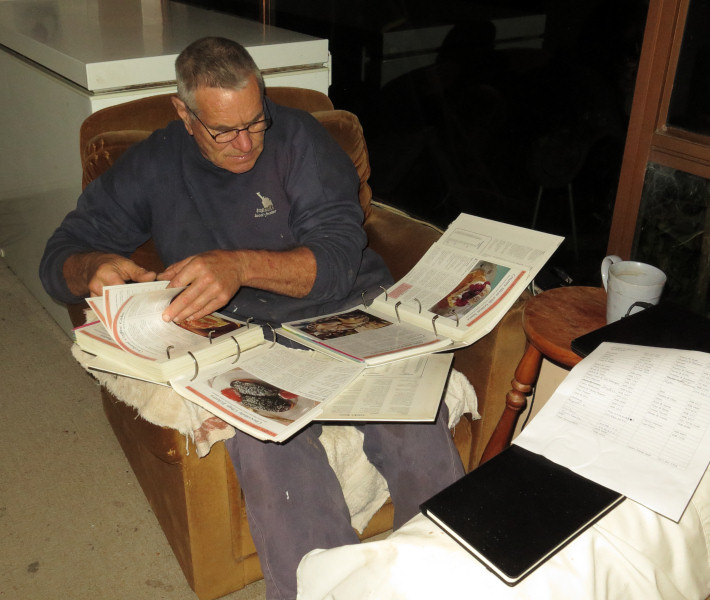 In town on Tuesday we visited three of the charity second-hand stores while we waited for the ute to be repaired.  In one of them I spotted a Successful Baking folder.  I last found one five years ago in a second-hand bookstore in Devonport.

Stephan sat down this evening with both folders and transferred cards from our existing collection into the new and improved-condition folder.

While we talked about where the original cards had come from, I realised that I'd previously forgotten they'd arrived during my residence in Mt Roskill with Amanda, and that it was she who had first made the Nutty Chocolate Fudge and the Lasagne with the fantastic tomato sauce.  Amanda O'Neill, whatever happened to you? 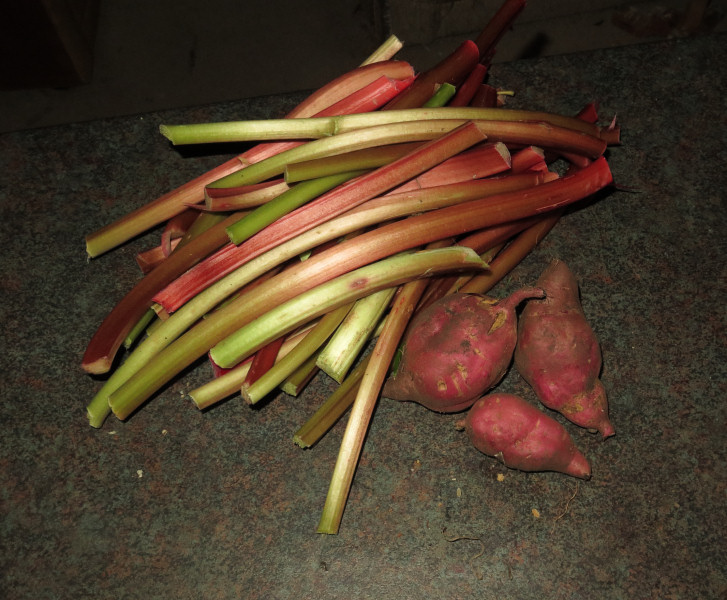 Dinner included kumara and rhubarb, fresh from the garden.