Another day relaxing in the Whāngārei resort.

The lovely gynaecologist I've been seeing regularly over the last few years came to talk to me, confirming the plans made with her colleague after yesterday's procedure, that due to their not having found a cause for my bleeding that could be remedied, we must proceed to hysterectomy, the removal of my uterus.  That is an operation I have steadfastly refused over the last few years, but have had to learn to accept the need for in the last couple of weeks.  Lovely consultant said I will be on her surgical list on Tuesday, 12 March.

In the mean time, here, have some more blood!

So while I received another unit of somebody else's red blood cells (thank you all you lovely blood donors!) Kate and Geoff dropped in to visit for a while, around the same time Stephan appeared to take me home.  It was a bit like a party.  I wasn't having a great time though, the blood being fridge-cold and not warmed on its way in; it hurt for most of the two hours of the transfusion.

But when that was all finished, I was allowed to go home.

This morning a woman who'd contacted me via the website about visiting us with a convoy of vintage cars on an upcoming rally, came to visit.  I think she thought we had a craft shop operating here or something, creating works people might enjoy viewing during a visit.  With her and her husband was another couple, whose names were familiar as a pair: it turned out they were indeed the former Post Master and Telephone Exchange operator from Mangonui when I was a child, where they still live.  They told me all sorts of stories connected with my parents that I had either not known or had entirely forgotten.  It was a lovely blast from the past. 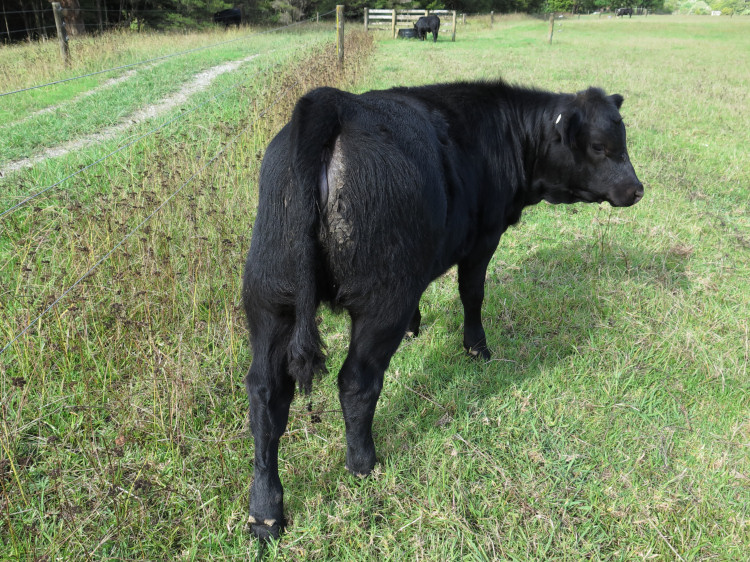 A week ago 183 had a case of wet, stinking scours and this is what happens afterwards.  When wet faeces stick to the skin and hair it irritates the skin so that all the hair falls out afterwards.  In a couple of weeks she'll have fine regrowth there again, as the hair grows back normally.

In the foreground stands Emergency 111, whose slightly distracted look was due to her alertness to what was going on with her daughter beyond the fence: Genie 150 was in standing heat (the steer was mounting her in the picture) and Emergency seemed to be coming on too.

That is disappointing.  It is just over seven weeks since I inseminated her, so presumably she was pregnant but the pregnancy failed.  The six-week return happens from time to time when an early embryo fails, is reabsorbed and the cow returns to fertility - but too late to get in calf for the coming season.  This may well signal the end of our time together.

I moved the cows and calves (now a big group of 69) this evening, from Mushroom 1 to Flat 5d.  As I was walking back I saw more bodies across in Mushroom 2, a confusing thing when I'd just moved the cows: feral pigs!

I called Stephan on the radio to bring weapons with which we might attempt to shoot them (attempt, since I've not been able to hit anything with my new rifle yet).  Again I missed.

It would appear that the man who sighted my rifle in before I got it did not do a satisfactory job for the distances from which I usually shoot.  I'll have to do it myself. 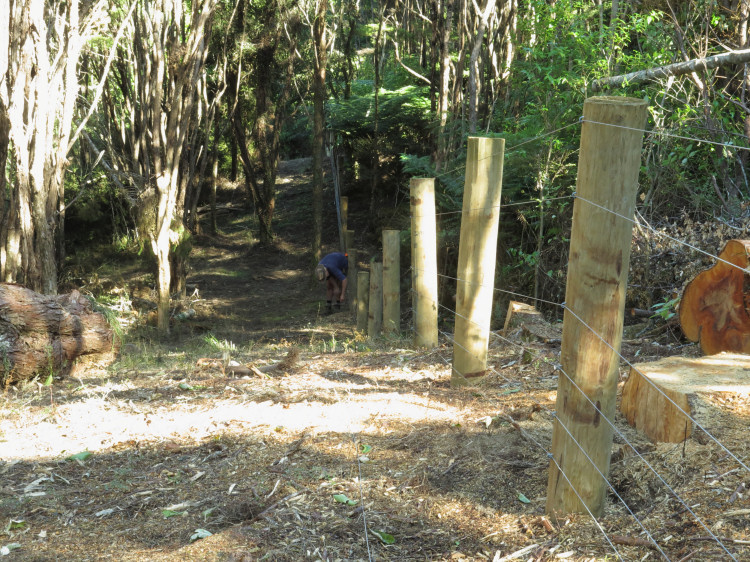 Stephan has run, stapled and strained six of the seven wires.  The third down will be electric, so will need insulators on the posts before it is attached, which was what I found him doing.

By the end of the day that was completed and so the first strain is finished.  Excellent.  Actually not quite finished since the battens need to go on yet but for that job we intend to hire a staple gun, because it's tough, repetitive work, too much for 66-year-old elbows to complete without damage and pain.  We'll hire one when the entire fence-line is ready for battening.

We brought all 69 animals across the stream after lunch, to graze the well-grown Road Flat paddock.  It was the first time most of the calves had been that way and a few were a little troublesome to move, but eventually found their way to the others.

It is not a large paddock for so many animals, so they won't be here long.

729 was on heat today, another probable six-week return.  My insemination conception rate therefore falls to 87%.  This is the tough part of the year when I start having to prepare my mind for these extras to potentially join the cull cow list.  729 is a nice cow but I don't think I want to carry her through a calf-free year.

I seem to have forgotten to take pictures today.  In the morning Mathew came out to help Stephan and first we three went up the road to move the cattle across the road to the hill paddock.  It was good to have an extra person for a first-time move for many of the calves.  Having someone on either side of the mob on the road is a necessity we occasionally have to neglect if one of us needs to fish some reluctant cattle out of the paddock to follow the others.  A third person made it all stress-free, particularly since I can't move anywhere in a hurry.

Stephan and Mathew then headed off for a few hours' fencing until we all had to go to town in the early afternoon.

By early evening I'd listened to the cows across the road moaning for long enough!  They'd all run up the hill when we put them in there, and around to the gates at the other end and it looked as though most of them had stayed there all day: they did not like that paddock!  It has probably not been long enough since the cull cows and calves were in there.  I prefer happy cows, so opened the gates for them to have the corner area as well and the noise level immediately dropped. 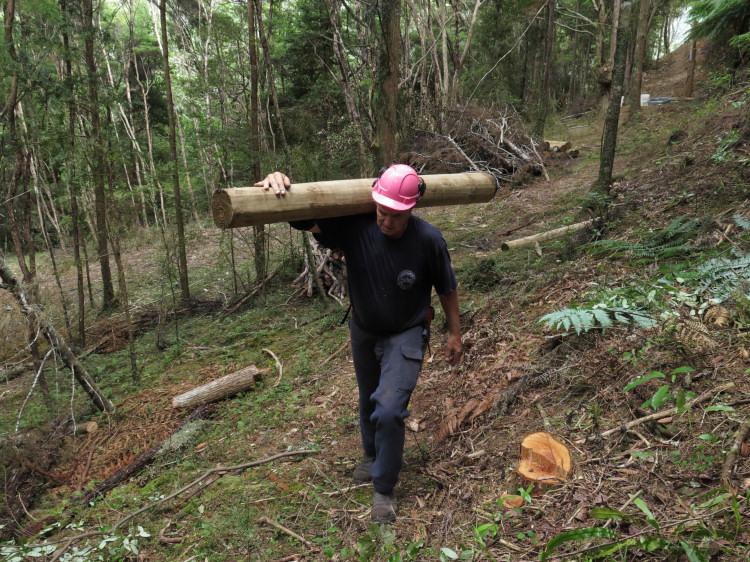 We often both talk of our forebears and the apparent old-ness of some of them in younger years than Stephan has attained.  My grandmother was a frail, little old woman at 60, Stephan's father an old man when they first came here at 60 (although he became fitter and stronger with increased activity).  My father was still fit and cycling to work in his mid-60s, before being suddenly knocked off by bladder cancer.  Stephan certainly feels his age when he isn't being active enough but out here, he is still working at an impressive pace, getting fitter by the day. 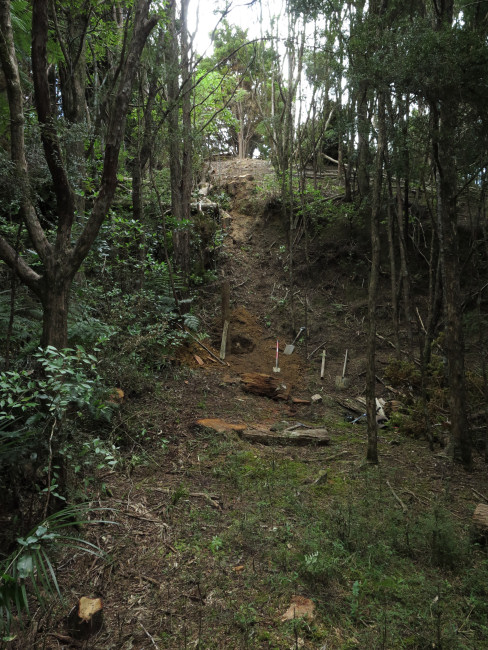 In the middle of this picture is one of the most difficult posts, being at the bottom of an almost-vertical drop. 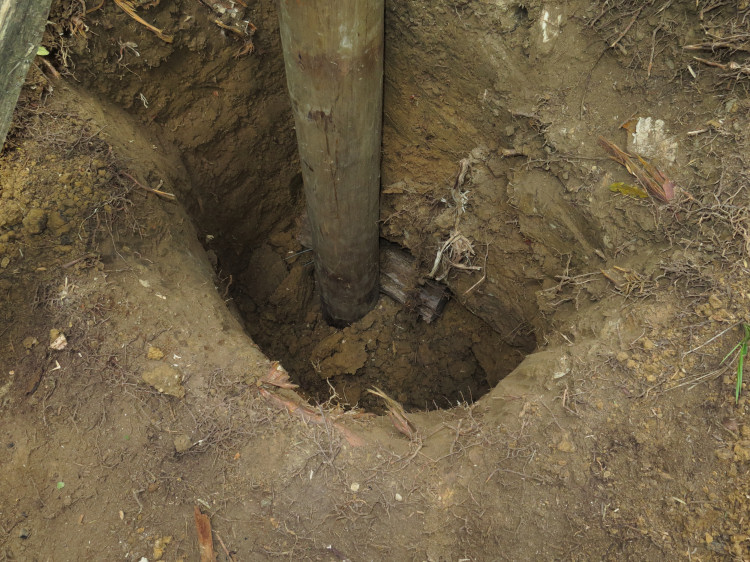 To prevent it being pulled out of the ground by the tension of the fence, it required substantial footing.

Stephan said he would also drive some Totara batten spikes down into the hole on either side of the post, over the top of the foot, for even more security.  Underground Totara remains solid, hence the size of this hole from the work required to extricate the original, huge Totara post.

The top strainer is placed where the two blocks divide on the other side of the boundary.  Unfortunately there was also an enormous tree exactly on the boundary line and Stephan realised after he'd put the strainer post in, that he would now have to expend significant energy and time in chopping out a lot of that tree's base, to enable the placement of the necessary stay for the strainer. 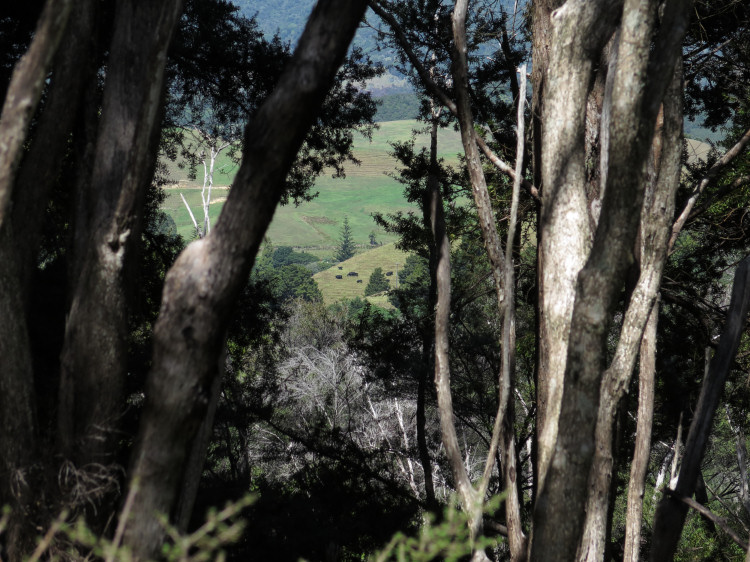 Looking down through the trees, we could see the cows and calves making their way around the hillside Over the Road. 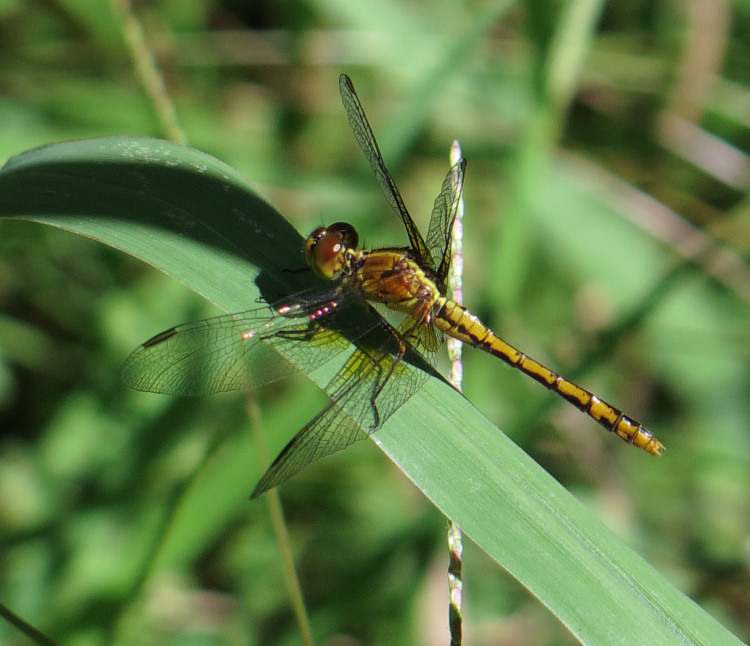 On my way down the hill I saw the golden flash of this beautiful dragonfly as it flew past me and alighted on some grass. 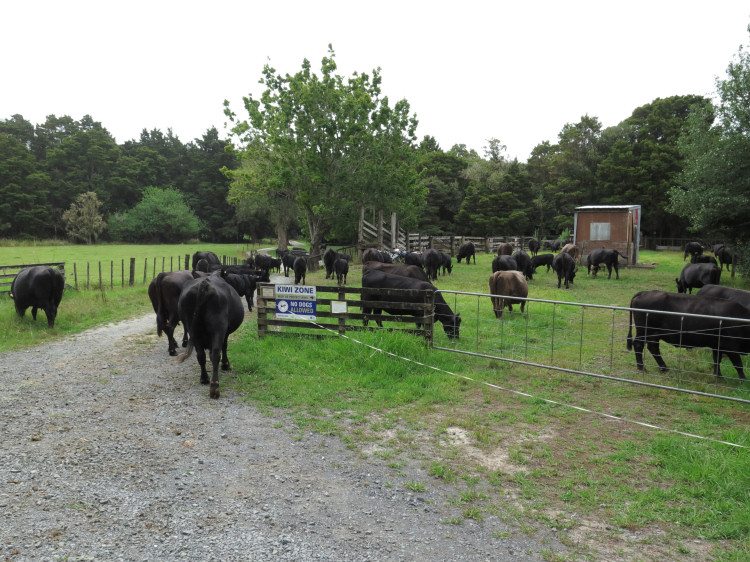 Bringing the cattle back from Over the Road.

I'm much more relaxed about that big paddock, now divided into its two parts, with the most dangerous gullies and drops fenced off.  If someone doesn't turn up for a while when I call, I no longer fear they may be stuck in a hole.