The week beginning the 28th of September 2019.
Saturday the 28th 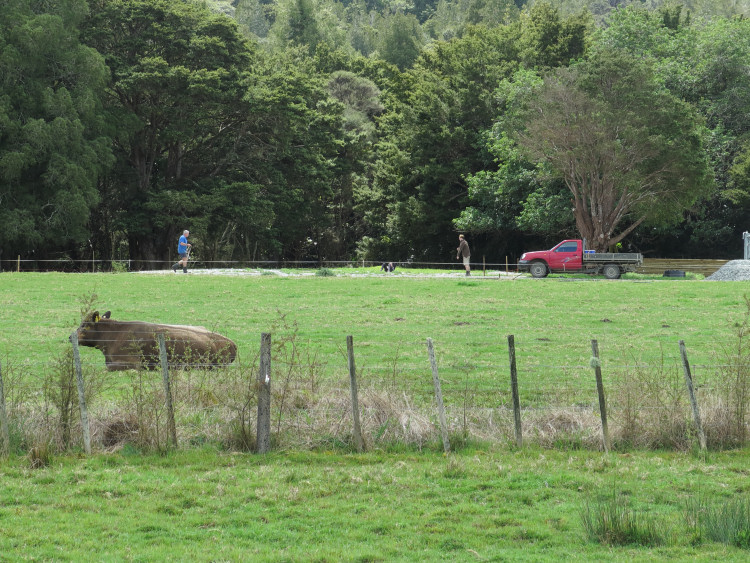 Great-nephews Liam and Ryan visited today, going out with Stephan to do some level measuring around the new yards site.  It was less flat than we had been able to see. 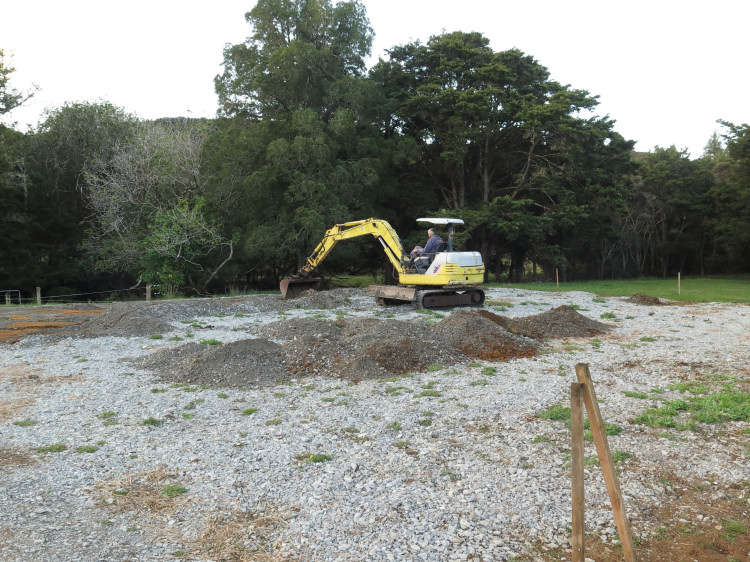 And so now Stephan has a digger, he decided to do a bit more levelling work.  Scraping the spread metal back may seem like a lot of bother, but it's great practise for the digger driver!

This morning Aaron, kind neighbour from down the road, lent me a little 50cc motorbike, to use while the electric bike issue is sorted out.  While walking around will actually do me some good in my long, post-operation, return to fitness, it is the carrying of heavy molasses to the cows each evening that requires the help of some sort of transport.  Doing it in the utility is a hassle, since it can't be turned around at the end of some of the lanes. 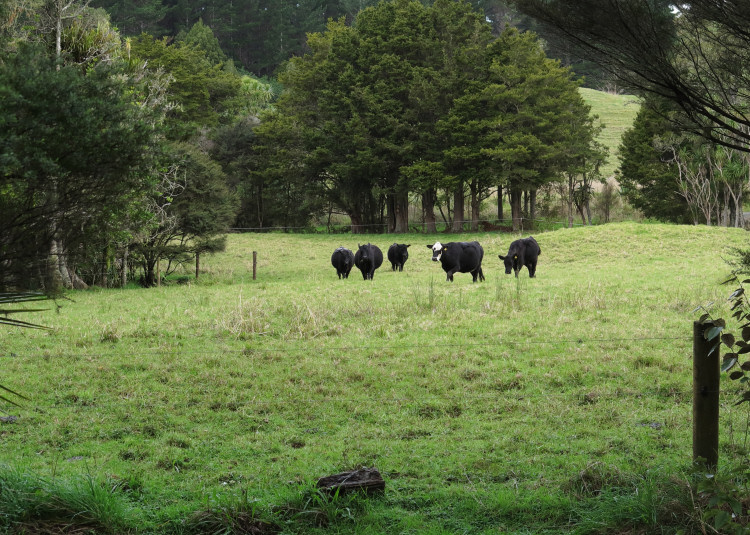 I brought the pregnant heifers back across the stream this evening.  At the moment I'm trying to keep the flats growing grass for calving, so only those closest to their due dates are there.  Everyone else is in the trickier paddocks. 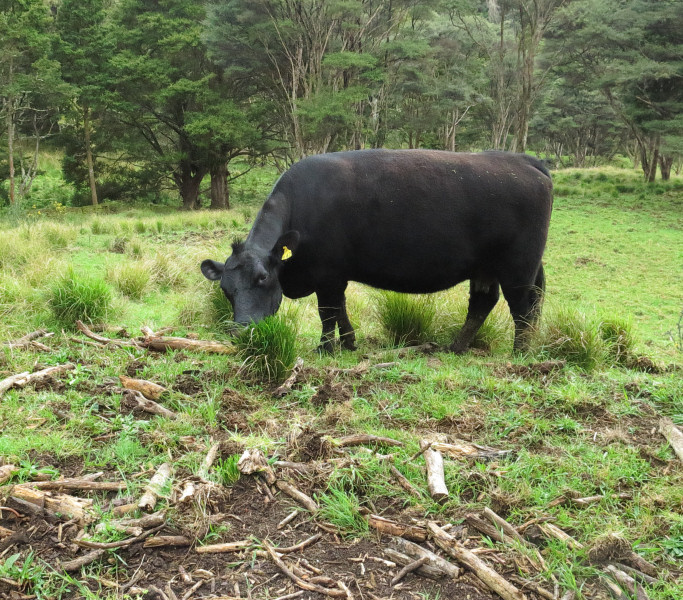 This is the right sort of cow: Gina 142, in great condition as she approaches calving, highly bred but still willing and able to eat utter rubbish and maintain her body condition regardless.

I'm always interested to see the cattle eating the sedge plants.  They must be tasty enough to be continually tempting in spite of their sharply cutting leaf edges.  Some of these "poor" grasses (in terms of productive growth) are reported to be highly nutritious. 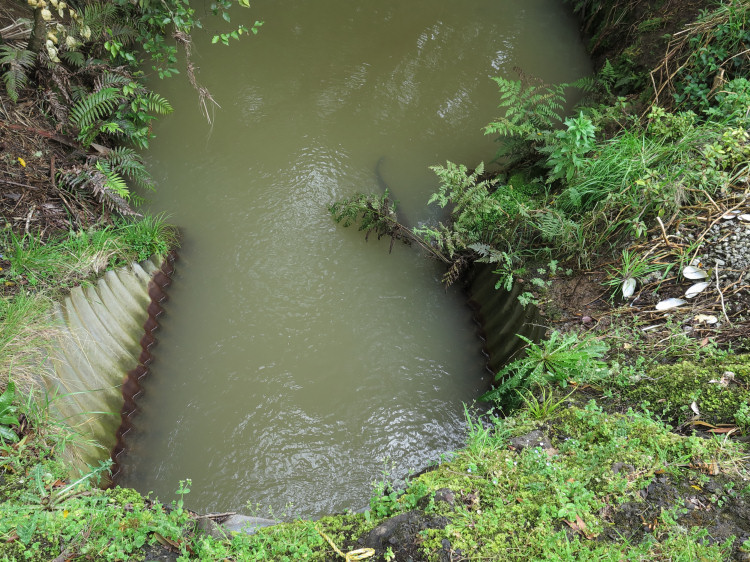 Our upstream neighbours have obviously shut their cattle into their wetland drains again.  For the water to be this murky down here under Jane's bridge, thick sludge must be coming out of their wetland to join the main stream which is later diluted by several other clean tributaries.  Apparently this is allowed under current environmental guidelines.  There are good farmers who operate according to good environmental principles and then there are bastards who don't give a toss.  These upstream people do a lot of talking about their good conservation works but out the back of their farm, where nobody else sees, they do appalling things.

The big eel in the picture is often here in this part of the stream.  I felt sorry for it today.  Swimming there must be like us sitting in a smoke-filled bar.

There's another black rabbit on the flats, this one in Flat 2. 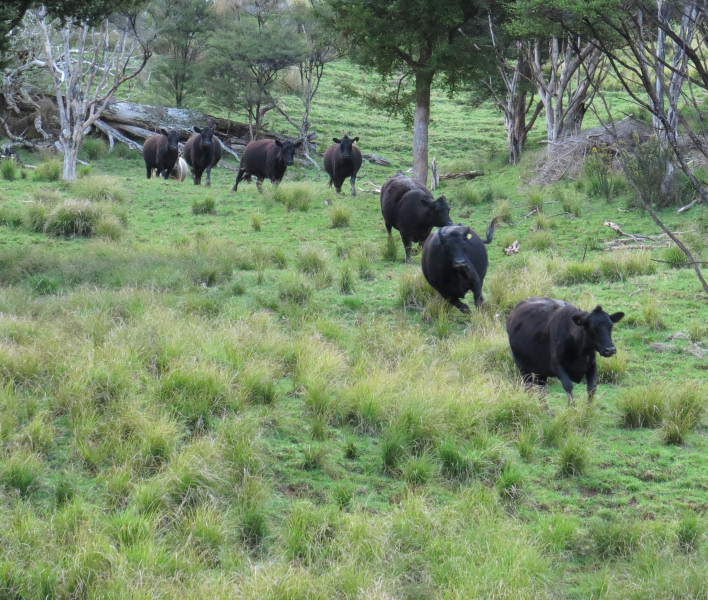 Out the back it was time for the cows to move out of the Middle Back so I called them down to the bottom gate into the Spring.

They came belting down the slope toward me!  Matrons in their ninth month of pregnancy should surely be more sedate?  They have amazing bodies.

The bike shop and the manufacturer made some agreement and so the bike will be collected today.  They're still talking about fixing things.  I think they should bring a replacement with them, since I bought the damned thing to ride it, not have it living back at the bike shop.  It's all very unsatisfactory.

By the end of Friday, after more emails, they suggested a refund.  I'm puzzled, wondering whether UBCO have insufficient faith in their own design to risk replacing this faulty bike.  Are they discovering that it is not up to the job in ordinary farm conditions?  Not that I've used it in anywhere near the sorts of nasty conditions I see in their advertising stories: I'm not a dairy farmer driving around in cowshit and mud every day.

While I'd rather have an electric bike for all the lovely reasons I bought one, and would have accepted a complete replacement, if it would constantly cost more to repair and replace elements that are not sufficiently robust for constant use, I guess I'll have to go back to something running on petrol.

The UBCO has a lot of really stupid features obviously not thought about by anyone who's worked on a farm.  The brake disks are uncovered, so presumably the brake pads will wear very quickly in dusty/muddy conditions; there's no rear mud-guard, so all the splatter ends up under the carrier at the back and is a pain to clean out; you can't easily or adequately adjust the distance between handle-bars and seat for a person of short stature; neither carrier has enclosing rails, so there's nowhere to just chuck something on and ride off, everything has to be tied on.  Oh and as for the ridiculous nonsense about having to have a smart phone app to turn the headlight off!  Why couldn't there just be a switch? 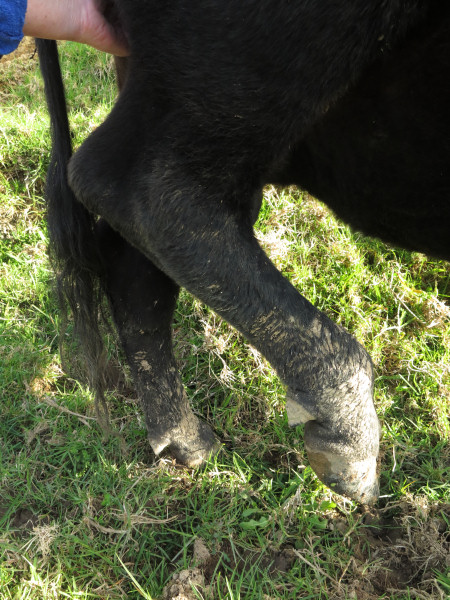 This is not an obviously self-explanatory photo but I took it to remind me to tell the story of the cows who like a good scratch.

Here I was scratching 775's inside rear leg and in response, she had lifted her leg so I could reach the crease between her leg and udder.  A few of them will do this and at first it is disconcerting, the movement being similar to a cow about to issue a sudden kick.  (Not that any of my cows have kicked me for several years, but once kicked, always nervous.) 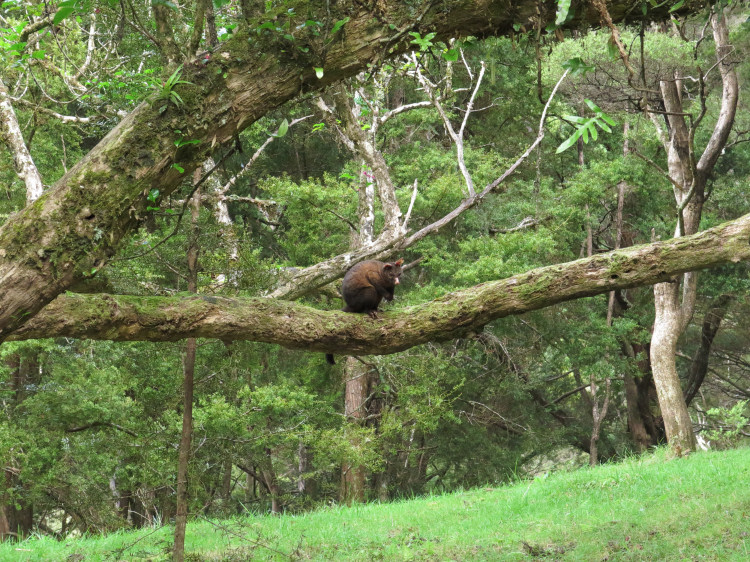 Then at the top of the Spring paddock, a possum walked out along the low branch of the big Puriri tree, then sat grooming itself for a few minutes.  When it moved again, I saw that it was slow and must have been sick. 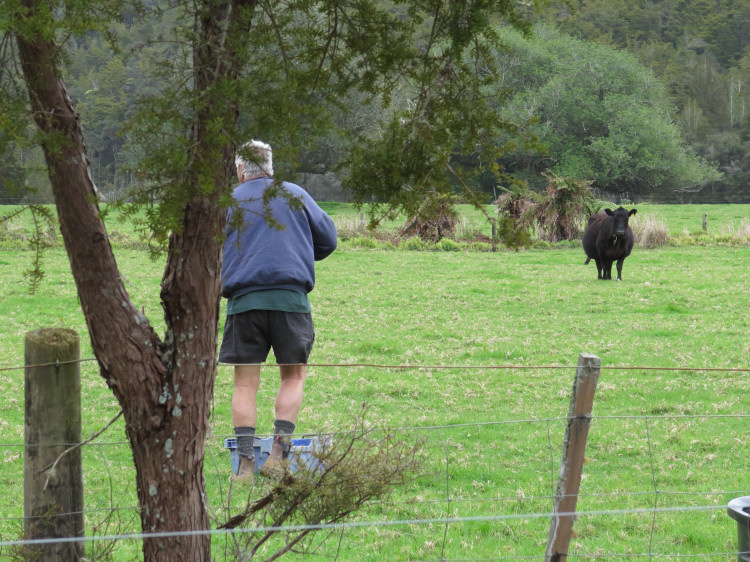 Something horrible has happened to my lower back and I'm moving only slowly and in great pain.  Stephan came out with me in the ute and did some of my walking for me.

Here he was dishing out Imogen's molasses and Magnesium Oxide. 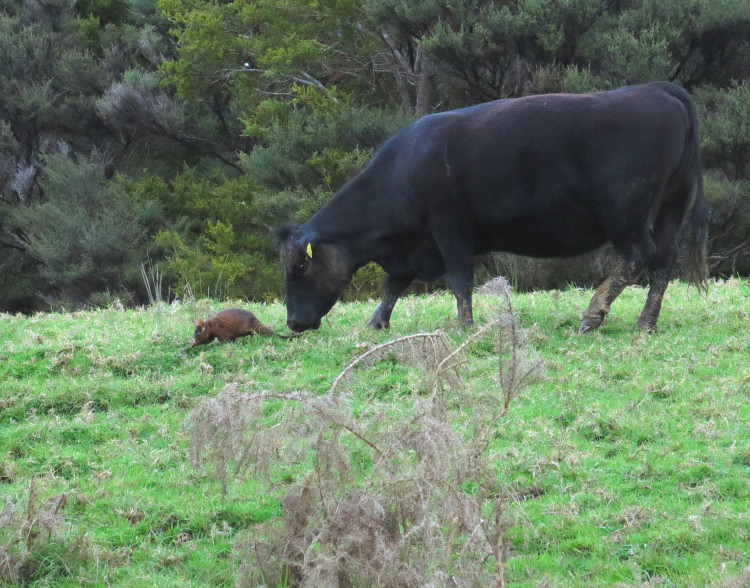 We went out to the Spring paddock to check the cows, since I'd failed to find 607 during yesterday afternoon's check.

At the top of the hill near where I'd seen it yesterday, the sick possum was crawling across the grass, closely followed by Gina 142. 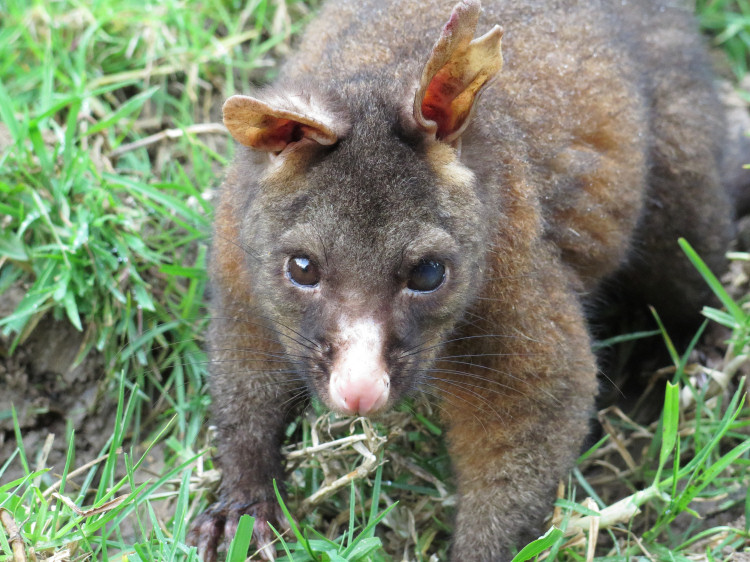 I managed to get quite close to it to take a few pictures of its cloudy left eye. 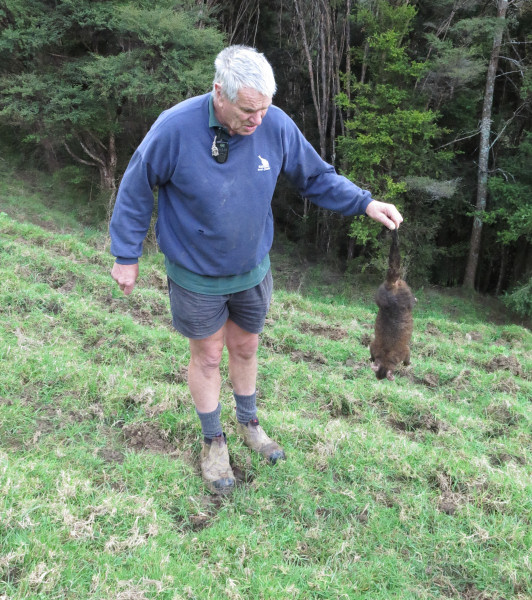 We wondered what to do about it until I suggested it was probably so sick it could be carried down the hill without much risk from its sharp claws.

At the bottom of the hill, Stephan placed it gently in the live capture trap by the gateway, put that on the back of the ute and we took it home and placed it in a sheltered spot for the night.

I had decided it would be prudent to talk to the TBFree people about two sick possums in three weeks.  It is quite unusual to see sick possums wandering around and possums with TB do reputedly wander in such a way.  TB isn't likely but it isn't impossible either and if it gets into the Northland possum population, all our lives will change significantly. 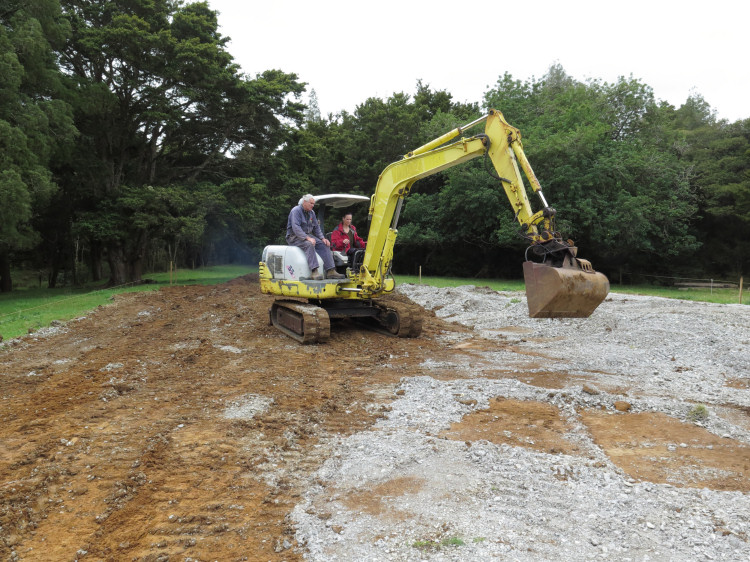 Elizabeth, Sarah, and the three children came to visit us today.  Sarah said she has always wanted to drive a digger! 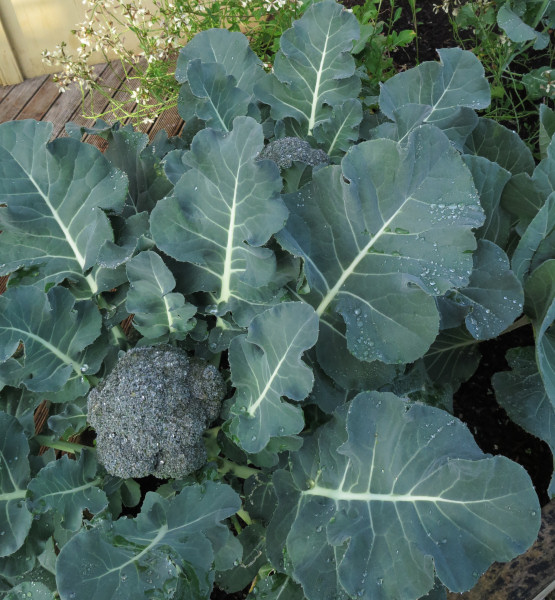 As I went out early this morning to check the cows, I passed the lovely garden beds and noticed Stephan's impressive vegetable growing efforts. 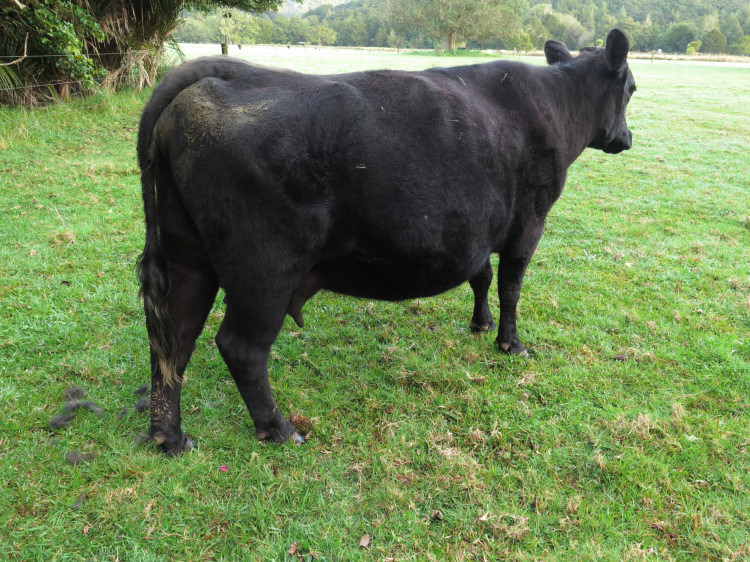 Time to start getting out at first light (which this wasn't quite but I'd looked at everyone earlier, from the house with binoculars) to check on the calving cows and here was Ellie 119, all back end and udder.

This is her sixth calf and the other five have all been born on days 274, 275 and 276 so she was due on the 2nd, yesterday or today, so I was not surprised to find her looking quite thoughtful this morning.  She very much enjoyed some massage around the top and beside her tail.

Some of the cows go through very obvious physical changes in the days, sometimes only the hours, before they calve, as the pelvic ligaments all soften and the pelvis opens ready for the passing of the calf.  After massaging Ellie this morning, I stroked Fancy in the same places and noted the complete difference between them: Fancy has returned to her firm pre-calving state, while Ellie is currently all soft and pliable.

When I looked again from the house an hour later, Ellie was standing in the top corner of the paddock looking distracted and I kept watching her during the morning. 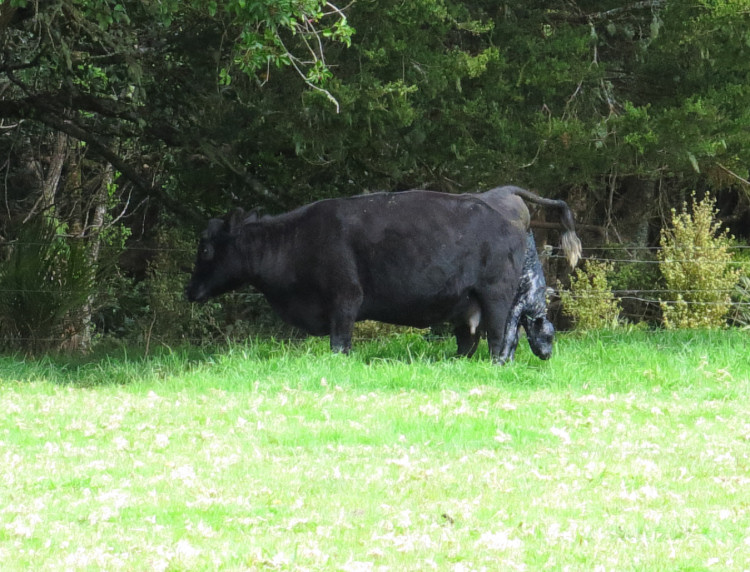 At 11.20 I saw her under the trees with some membrane hanging under her tail: the first bag must have come out and burst.  I walked over to watch the rest of her labour.

She lay down in the longish grass sometimes obscuring my view of progress and sometimes lay with her head toward me so I couldn't always see what was happening. 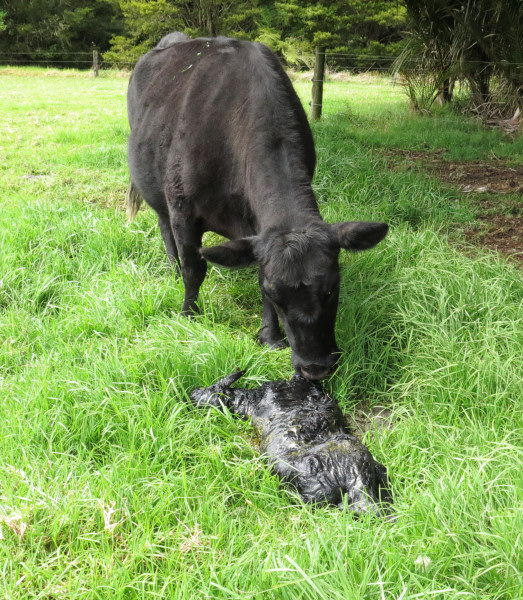 The calf hung for a couple of minutes before Ellie had another contraction and pushed him all the way out and he flopped to the ground.

This is our first bull calf sired by the big American bull S Chisum 6175.  I look forward to seeing if he's an animal we'll want to keep as a bull and use in the herd.

And in the mean time I'm immensely glad to see our first live calf on the ground, without any problems.

He was up within the next hour and feeding and by 4pm Ellie had expelled and was eating her afterbirth. 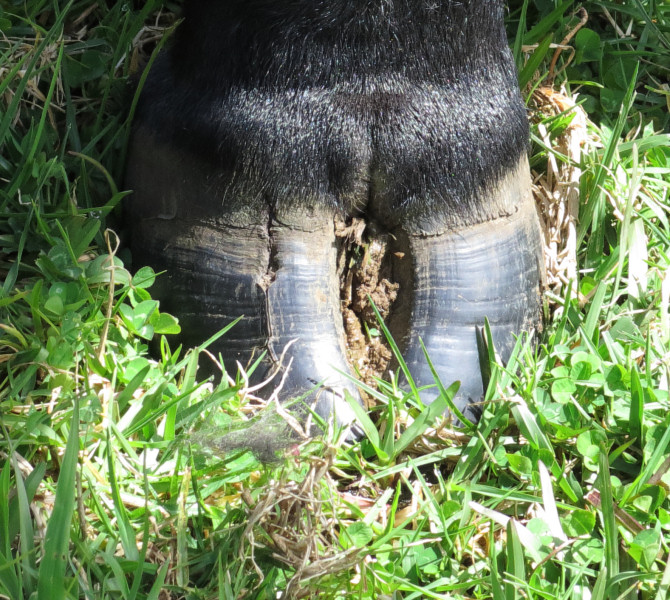 While I was there waiting in the sunshine I noticed 613's right front hoof, with this serious crack down the front of the outer toe.

I've not seen her lame at any time so it can't have caused her any pain to date.  I can't imagine what might have caused such an injury and wonder how it will grow out. 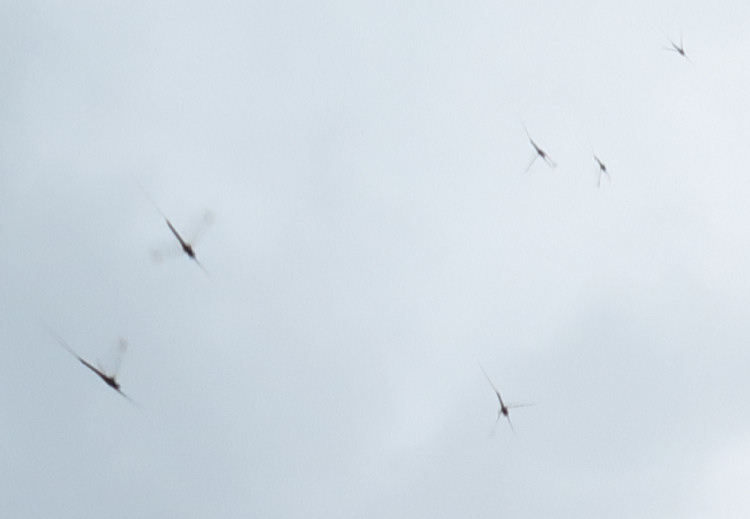 When I walked down to the stream crossing at the end of the Mushroom lane this evening, there was a swarm of insects hovering over the crossing.  I watched them for a while to try and see their shape and concluded they were Mayflies, one of which I photographed last year.

During my first night-time check on the cows I managed to fall through a fence when I got one of my not-working-properly-because-of-my-back legs caught in the wires and fell through it instead of climbing carefully through.  Fortunately I'd turned the power off before I went out but falling on the ground wasn't an intended part of my attempts to fix my sore back!  At least it didn't appear to have made it immediately worse.