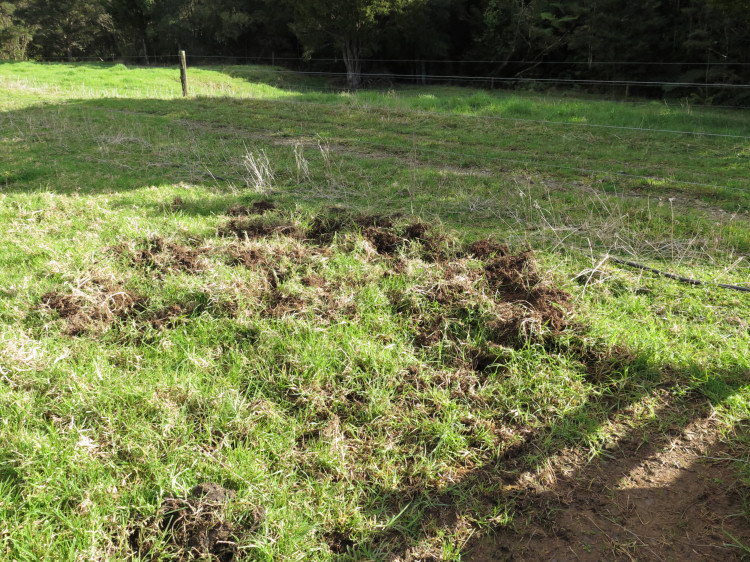 There must be a very big feral pig around to have ploughed this much ground at once.

The 11 weaning calves are in Mushroom 1 and the other ten heifers need a bit more to eat than is available directly next to them in Mushroom 2, so they're getting Mushroom 3 and the Riverbank area too.  Unfortunately the pigs have already had some of it. 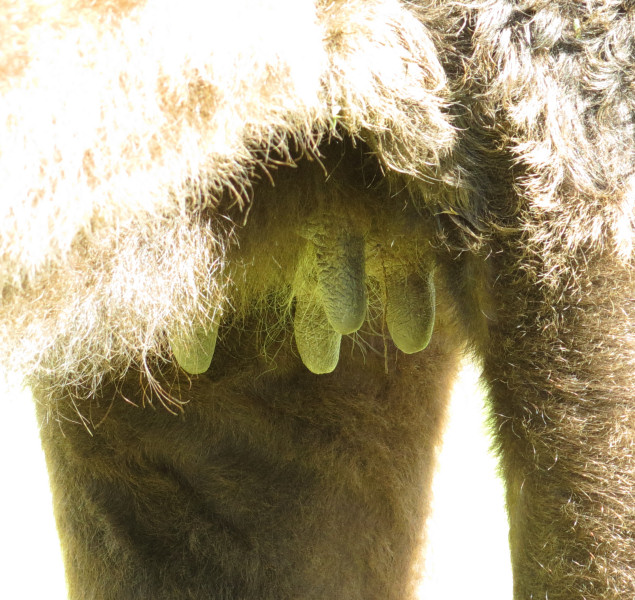 The heifers' udder development is just beginning to show.  I usually see it at about five months, in those who've never calved before - teat growth and there's a definite rounding of the quarters in those I can feel.  This is 812, who's easier to see than most of the black-haired cattle.

I found Gertrude 162 and 813 together again today, sitting in the lane away from the others. 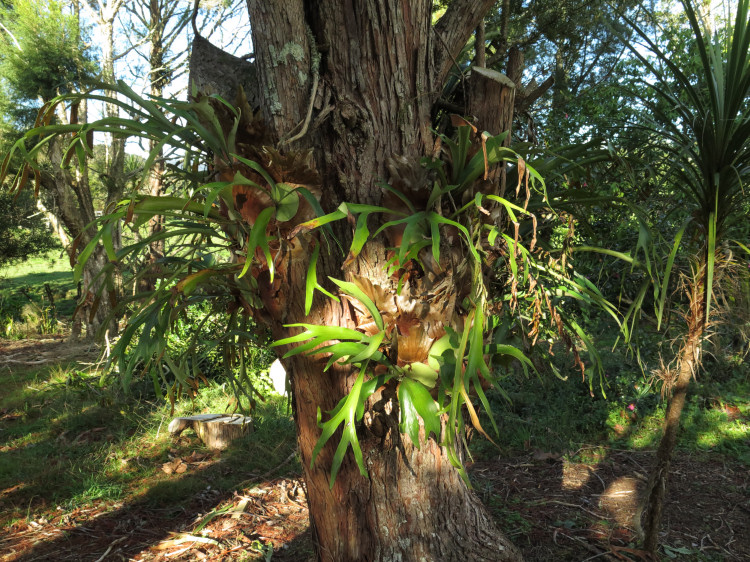 Changes in the neighbourhood: Sandra Taylor, widow of Arthur Taylor, has sold the family homestead where she and Arthur lived since 1947.

It is regretted by all concerned, that she allowed her grandson and his partner to live here for the past eighteen months but now they're all gone and we have new neighbours.  Stephan had already had a couple of conversations with them, out on the road before they bought the property and once in town since, but today was my first meeting with Hera and Hugh.

In their garden was an Elkhorn Fern!  I'd never looked at this part of Sandra's garden, so hadn't known this was here. 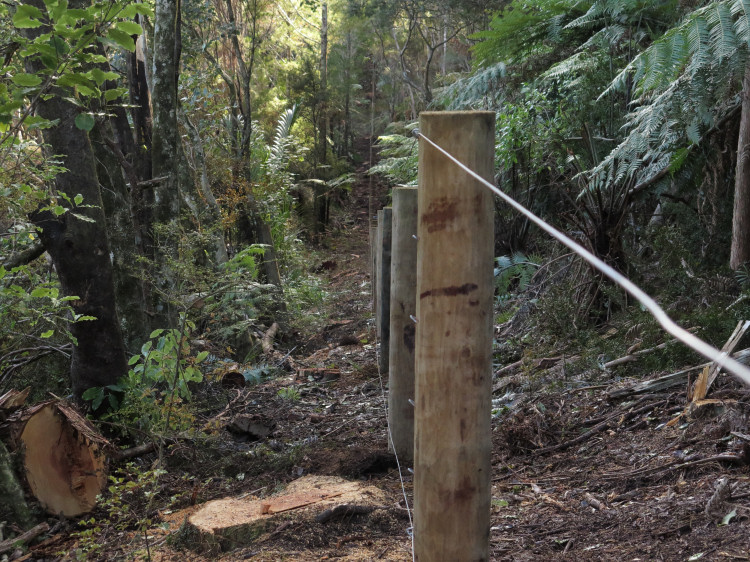 The four of us walked up to the boundary fence, to decide what to do along the edge of their garden: they're not keen to have the big Totara cut down for the fence and would prefer to have the fence diverted from the actual boundary line to save the trees.

So from the strainer post at the end of this strain (behind me in the picture) the fence will angle out before running down the hill and back in to the end strainer, back on the boundary again. 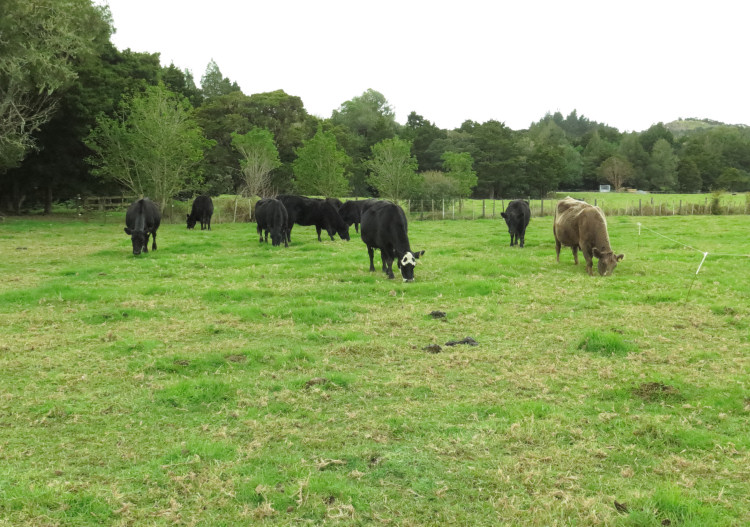 Here are my last weaned cows, on their restricted diet while they get used to separation from their calves.

This afternoon five of our Te Reo classmates came out to practise with us.  The seven of us sat around our table, taking slips of paper with simple English sentences printed on them, translating them into te reo.  I think it was a good exercise and harder for everyone than expected, but inspiring much discussion amongst us about how we would correctly and best say various things.

Monday the 1st of July 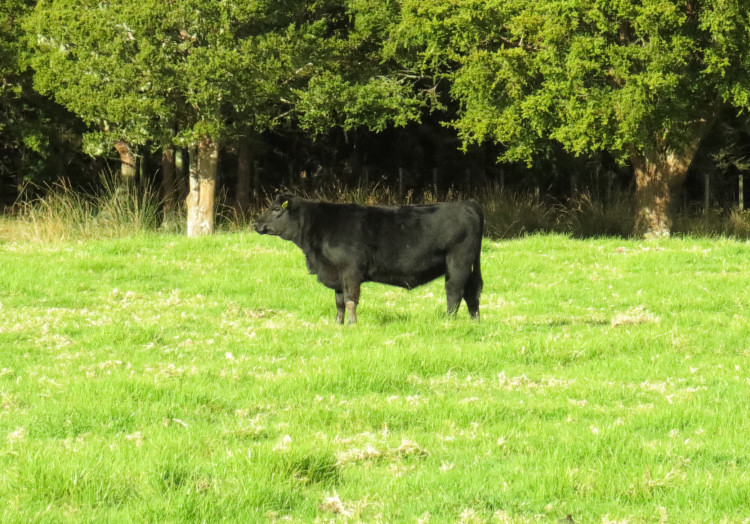 There is enormous satisfaction in breeding animals, when it goes well and you get what you've been aiming for.  This is 874, white-face 714's lovely daughter. 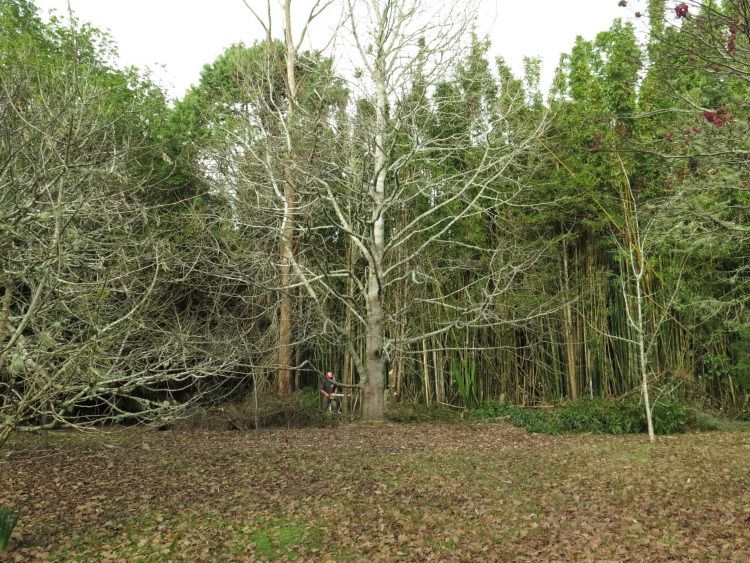 Liam came out today to help Stephan on the fenceline, although not in this picture, where Stephan was chopping up bits of a tree he'd had to fell. 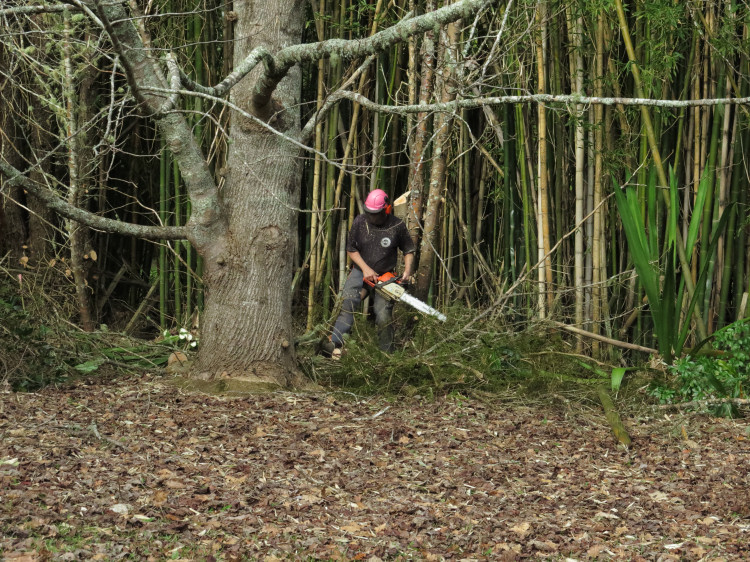 The enormous trees aren't coming down but there are several along the proposed new fenceline that require removal. 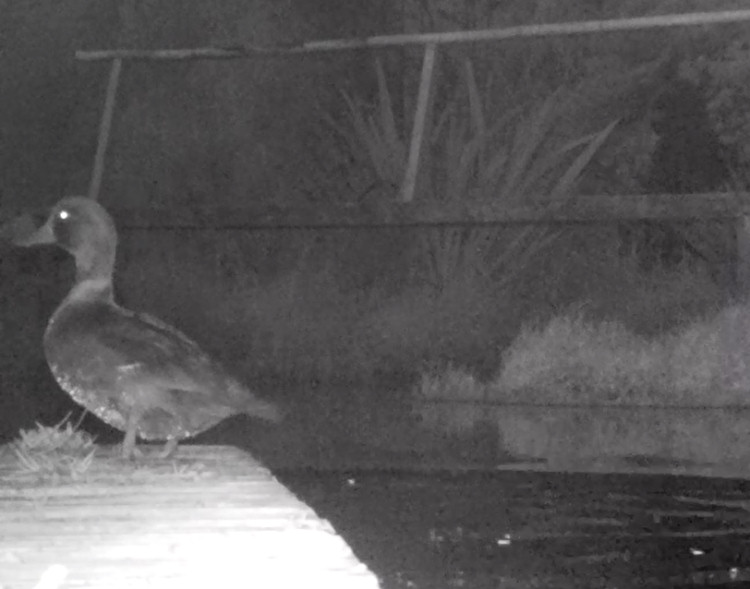 I put the trail camera on the jetty, to see if I see what the Scaup gets up to and here she is, just before 6pm. 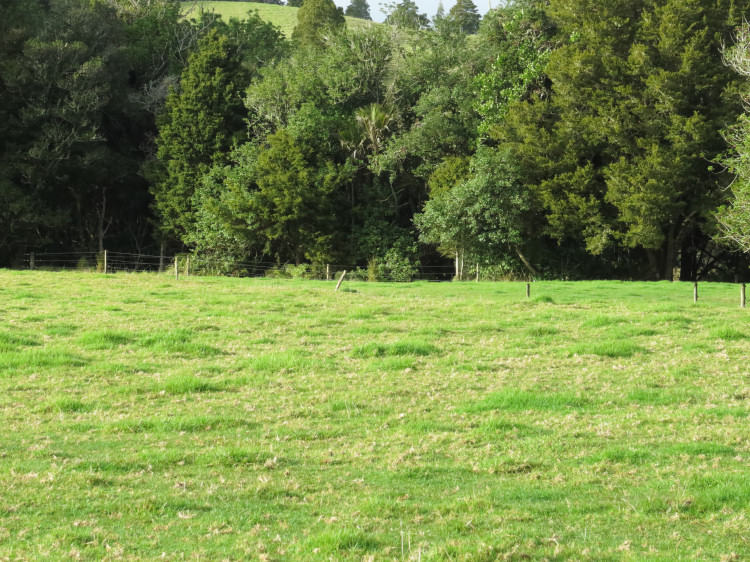 There's another broken fencepost in the middle of the picture, in the fence between Flats 3 & 4.  Stephan will come and fix it one day, in a spare moment.

In the mean time I went over and straightened it up again, where it will probably stay upright, held up by the wires. 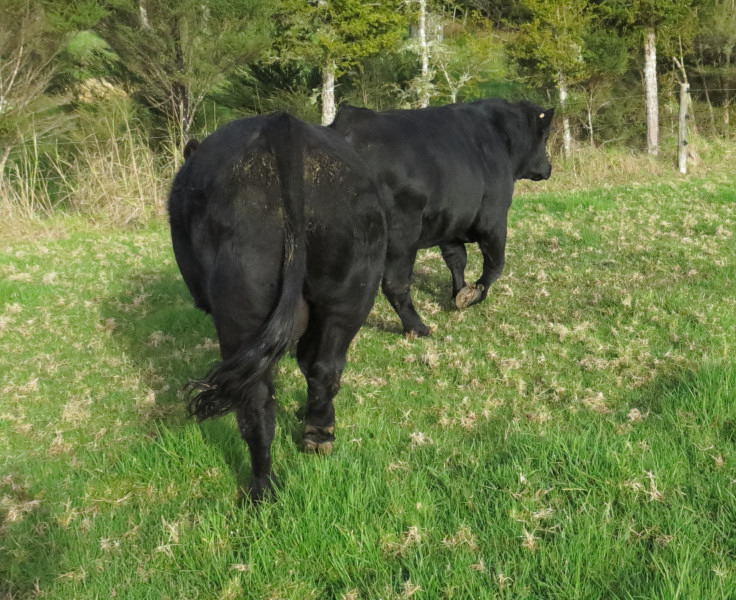 Here the bulls had just entered Flat 5b but I'd had to go into Flat 3 to get them.  They were quite interested in the heifers coming along the lane so I had to encourage them to move by patting them on their rumps.  It's nice to have reasonably quiet bulls again who'll let me do that without getting silly about it.

They're lovely and soft and fleshy.  I should always carry a stick but didn't have one to hand. 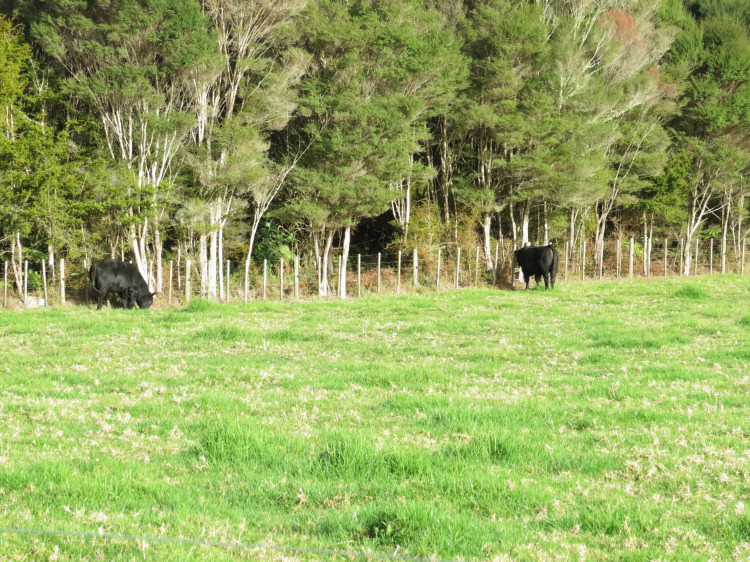 I don't think they've been in this paddock since Stephan and Mathew fixed up the fence and installed an electric wire along its length.

The bulls like rubbing their big heads on the battens and posts, which wrecks fences.  Today they went immediately over to the fence and I heard a crack and saw one of them jump as he contacted the hot wire and learnt not to do that any more. 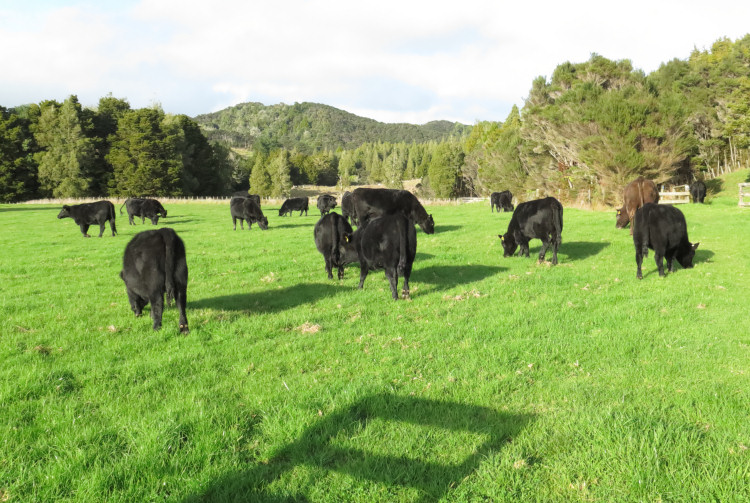 The mob of 21 heifers came along the lane and into Flat 4, onto the nice grass.

The weaners can still see and hear their mothers but no longer seem particularly interested in them. 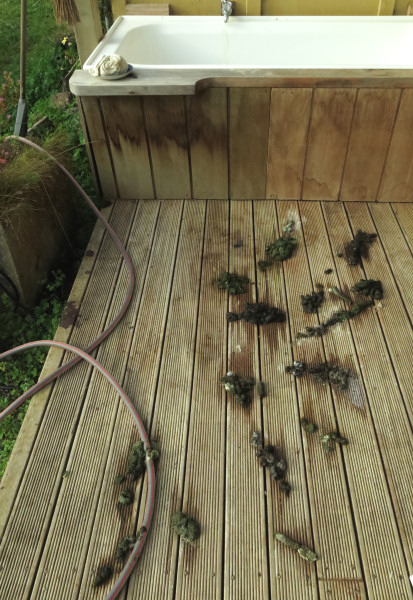 The goose's presence around the place is becoming trying.  We regularly find great piles of poo on our deck and this really is getting a bit much, right in front of the bath!

I've been making lots of hot water for Stephan to have long, soaking baths after his long, hard days of fencing.  He's working pretty hard for a gentleman of mature years. 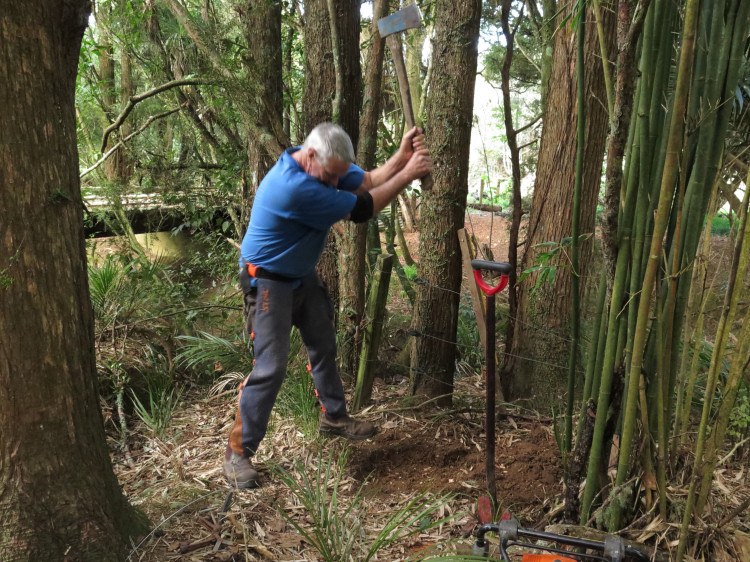 This was going to be the position of the terminating strainer.  But after several minutes of this kind of effort, Stephan concluded that trying to get a large post in here between all the tree roots wasn't something he could do and it wouldn't matter awfully if it wasn't exactly here.

It is a boundary marker, primarily (and not even on the exact boundary down here), without intended stock pressure. 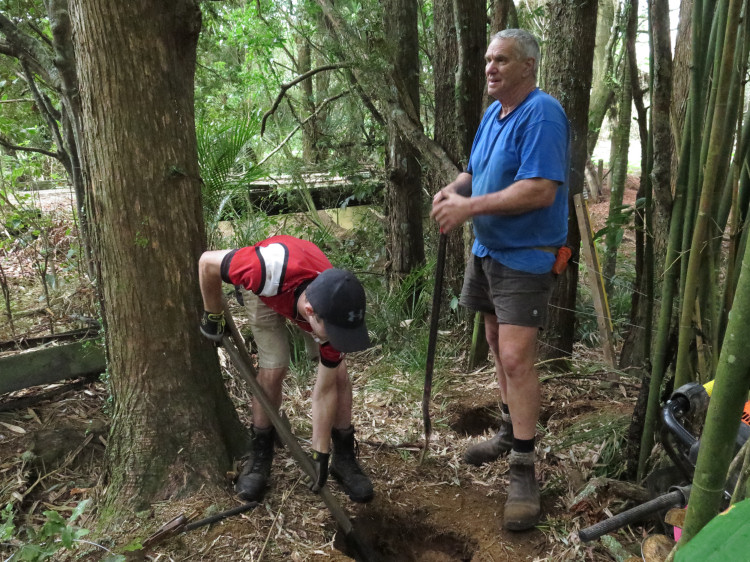 With only one large tree's roots to contend with here, it was possible to dig the hole.

Stephan will build some rails between the end of the fence and the existing fence along the river-bank, to ensure no animals can get from this property onto Jane's, which is our primary concern. 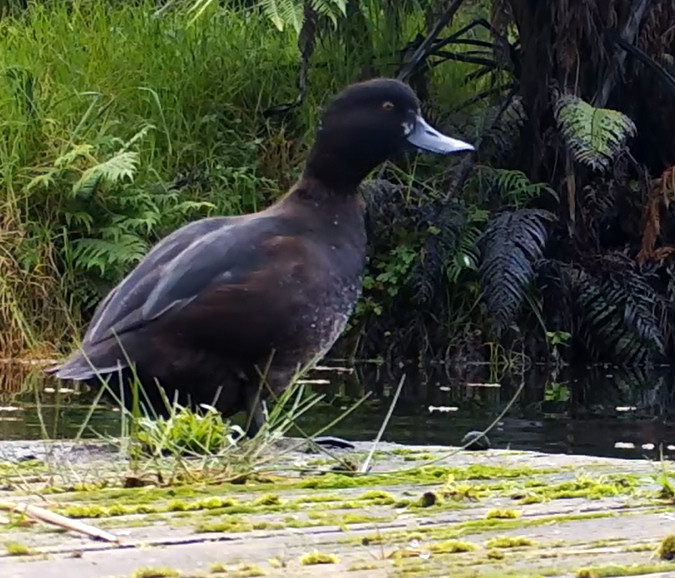 The Scaup again this morning.  She stood preening herself for quite a while, mostly facing away from the camera. 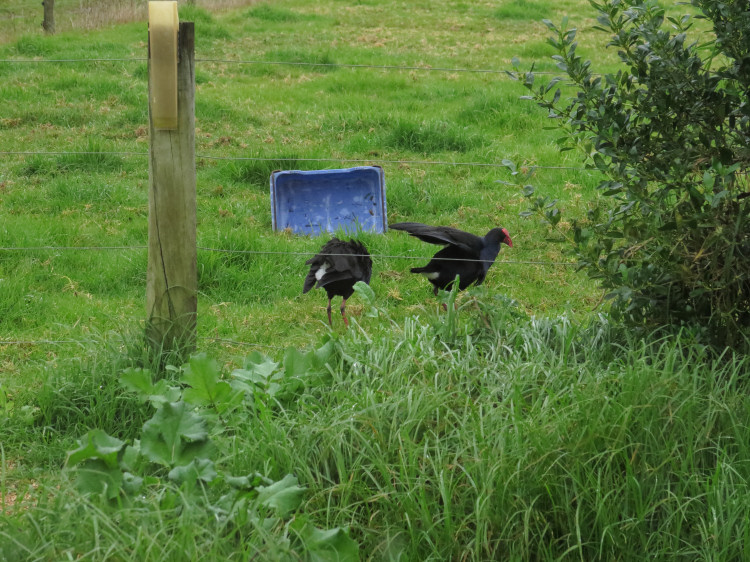 I dashed for the camera but was too slow to catch this pair "at it" outside the kitchen window.  There's a lot of Pukeko sex going on at the moment.

Being so leggy, they're interesting to watch.  Here the male on the right had just hopped off his mate, while she shook her feathers to restore herself to order.

We decided this morning would be the last milking for Zella for the season and, having tested her milk and found a mild infection, therefore treated her with the long-acting antibiotic "dry cow" treatment, before sealing her teats with another product to stop any dirt and bugs getting up her teat ducts during the dry period.

We've decided to go to Auckland for a few days next week and we need to watch Zella for a few days after we stop milking, in case she develops mastitis.  By next Monday she should be safe and we can get away. 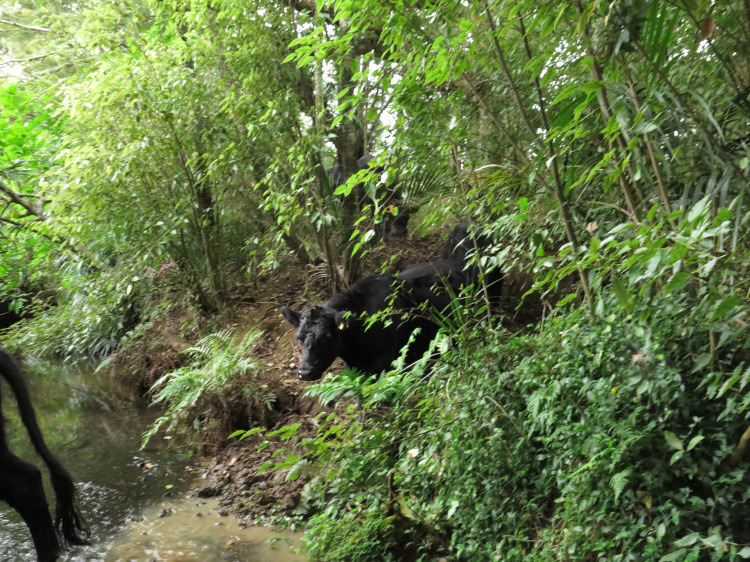 The heifers must have eaten the nice grass quite quickly in Flat 4 and were standing around for much of the morning.

After lunch I went and called them to follow me down into the stream, to cross over to the Road Flat paddock... 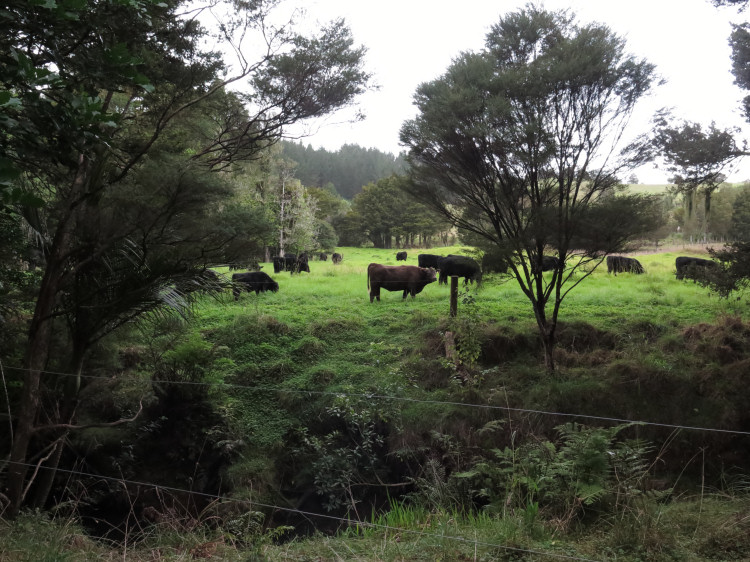 ... where they should be very happy for a few days.

The paddock has remained ungrazed since the big mob was in here back in February. 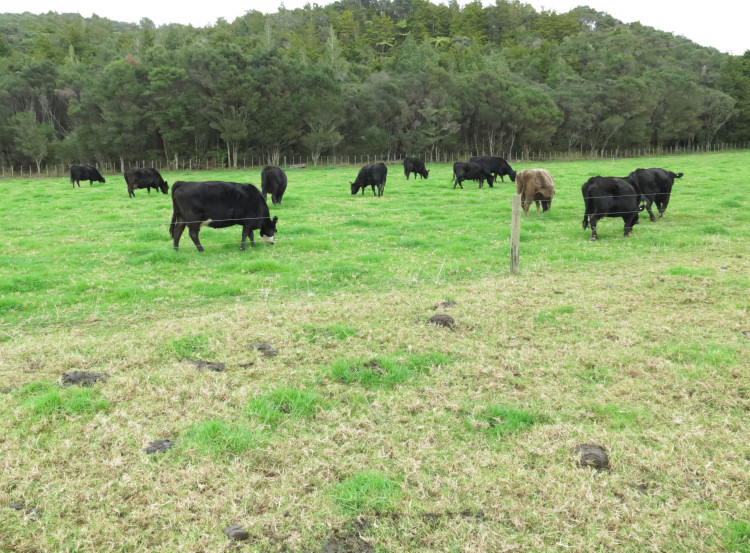 The weaned cows had finished 5d and were very pleased when I moved them into a larger grazing area in 5c.

As I moved them I could hear Stephan banging in the first of the two angle posts in the boundary fence. 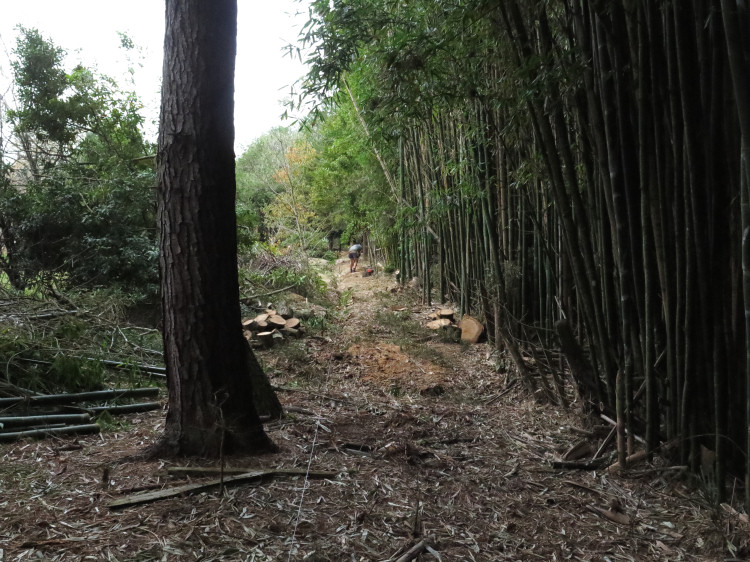 With the angles in and a guide-wire run, he had started putting in some of the running posts. 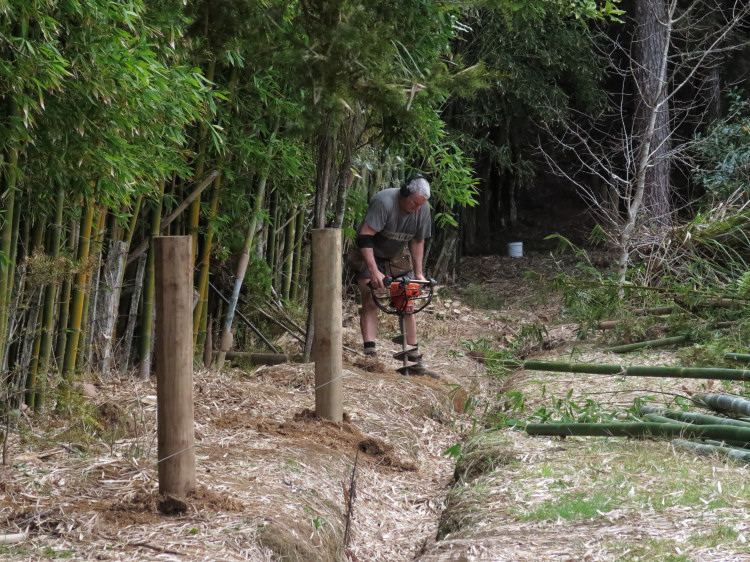 As expected, the huge bamboo made the digging a bit tricky, the earth being matted with their fibrous roots.  Still, better than trying to dig through the roots of mature trees!

The temperature today was extraordinarily warm. 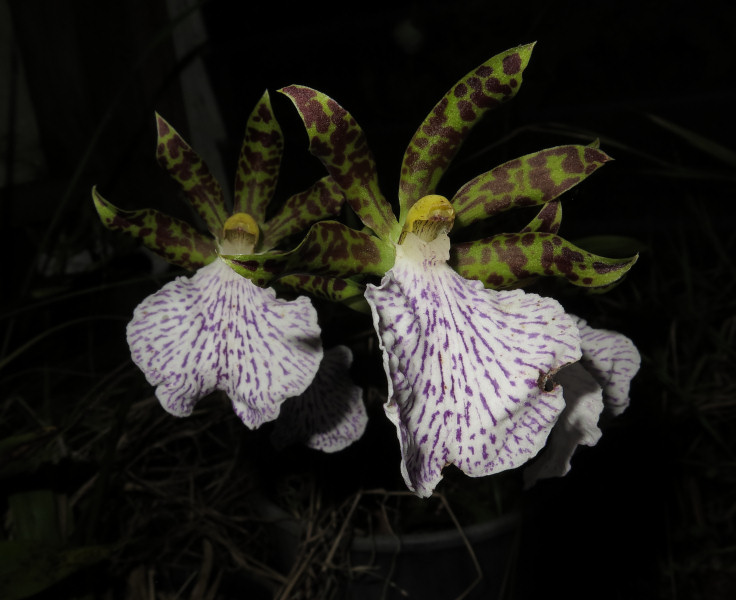 In my greenhouse some secret beauty has been developing: these are the blooms of some orchid plants friend Gillian gave me about three or four years ago.

They spent the first year under some trees, then the next on the deck and now, finally, in the greenhouse they've bloomed and I hadn't even noticed. 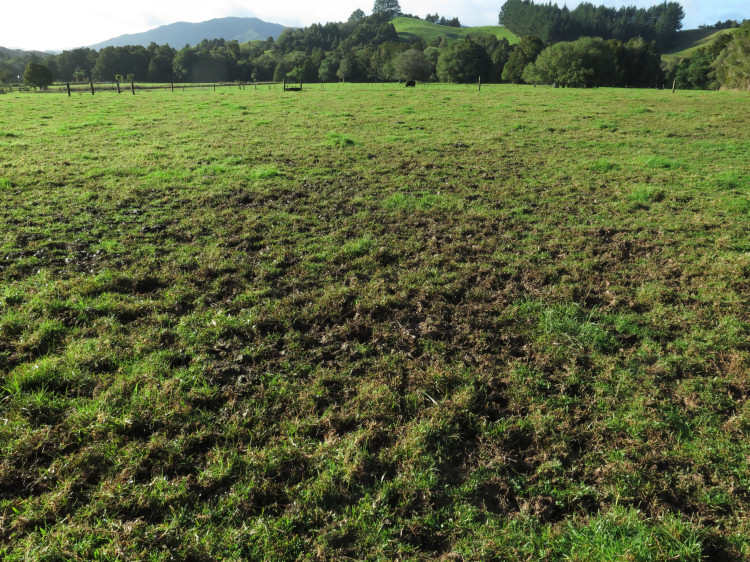 In the dark early hours I'd heard the singing of one of the bulls and thought, I wonder who's on heat?

It was Genie 150, with the cows in 5c and after a day of rain yesterday, it was obvious where she'd been standing for 714, who seemed to be her main playmate still when I saw them this morning.

I'm not sure why 714 is so interested.  I think she's pregnant but perhaps not.  It doesn't matter, since I've decided she's to go to the works with Emergency and Genie as soon as Moerewa can take them.

The bulls had made even more of a mess, obviously tussling with each other out in the paddock, between pacing up and down the fenceline. 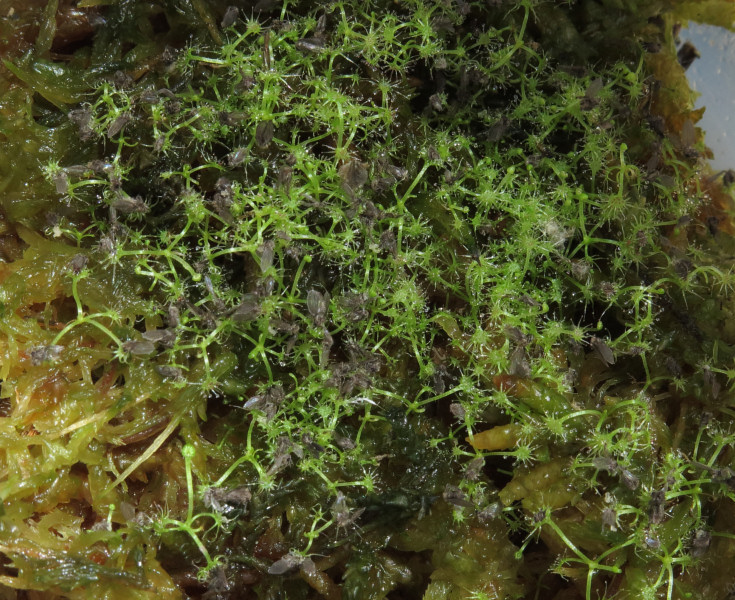 During the very warm and then wet Wednesday night, there were millions of tiny insects flying at the house windows.  I left the pottle of carniverous plant seedlings in the bathroom for a while with the light on and the window open and now they have lots to digest.