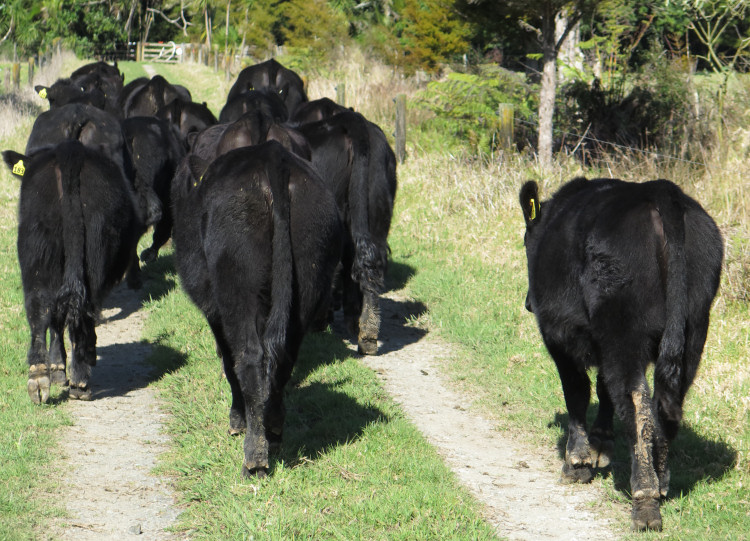 The weather has remained gloriously fine, so today I brought the cows in and applied pour-on drench to the light and skinny amongst them, as well as the two R3 heifers.

Then it was the turn of the younger heifers.  Most of them (at left) are looking lovely.  Eva's beautiful daughter 190, is looking a bit stressed, so hopefully this treatment will help her feel a lot better. 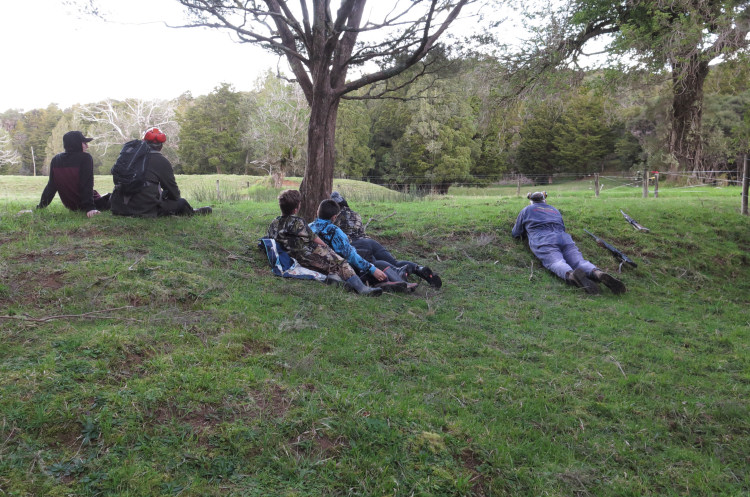 Raewyn, Mathew and three sons came out with warm clothing and weapons to aim at feral pigs in the late afternoon.  When we judged it pig-hunting time, we all walked quietly along the edge of the Mushroom paddock and lay in wait. 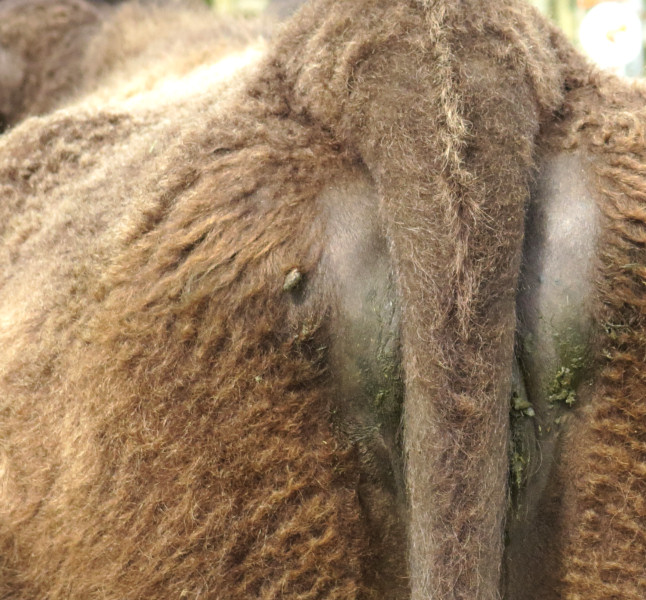 Over a couple of weeks I put several lots of iodine on it, whenever I saw her, and now it has shrunk.  I cannot say whether or not my ministrations had any effect.  It might have reduced on its own. 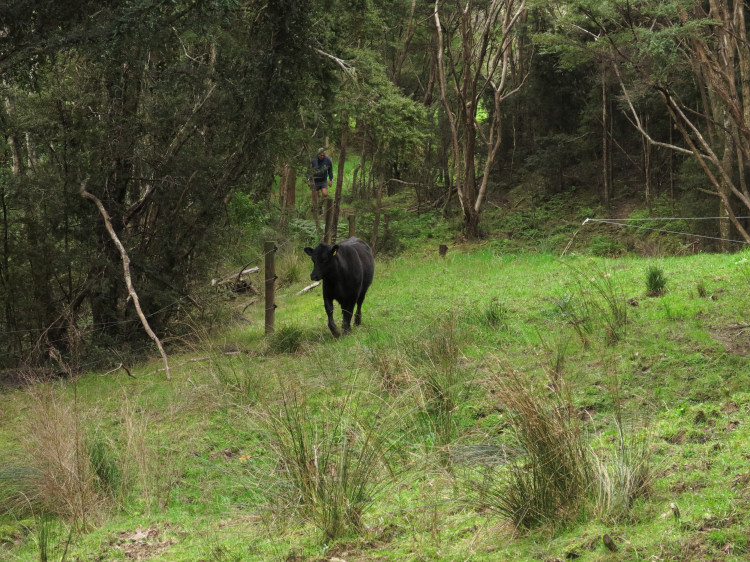 I went to the Swamp East Right to move the heifers and found only 20 of them there.  Stephan wasn't far away so after I had called for a few minutes, we both walked up the hill to see if we could find her and did so, at the top of the hill, on the other side of the electric string.  She may have been pushed through by one of the others and she wasn't coming back on her own.  Stephan walked back down the hill and pinned the string back out of the way so she could come back to her friends.

I'm glad she was safe! 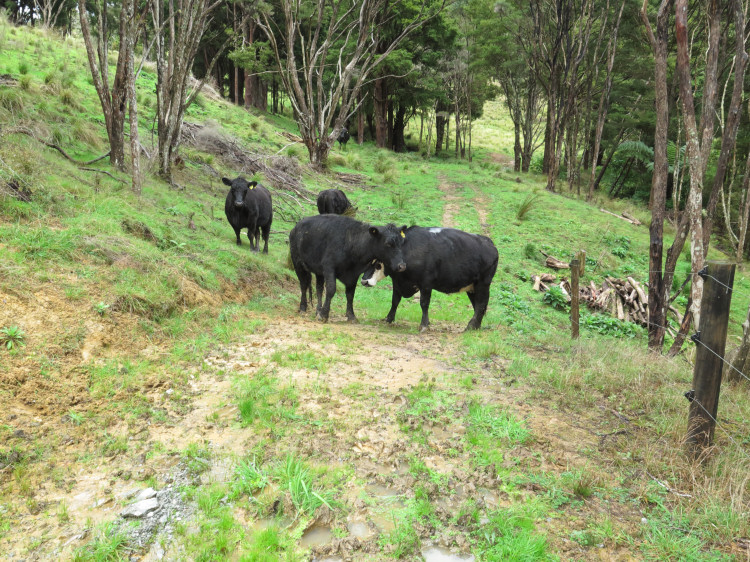 Arriving to check the young mob now in the Spring paddock, I found Spot and Dreamliner together.  Dreamliner was keenly, repeatedly attempting to mount Spot, who was on heat again.

Today's entry should rightly be written in te reo Māori because I have signed up with Mahuru Māori to speak, read and write only in te reo for one day each week throughout this month.

It was quite tough, although by 11am I'd got into the swing of it, listening to the radio, talking with Stephan.  It became somewhat more frustrating as the day progressed - and even more so for Stephan, whose vocabulary is less developed than mine so far.  But we managed and it was mostly fun.  Disciplining oneself to think and speak in a language one is learning is great exercise. 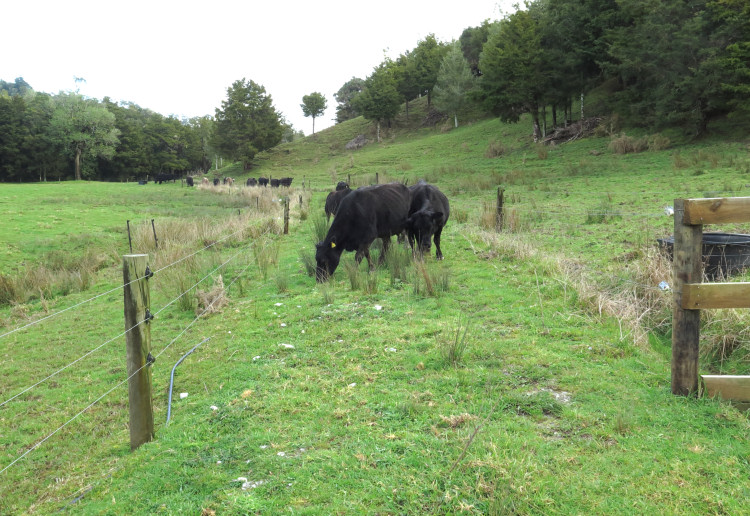 As the cows came along the Bush Flat track I contemplated how much less boggy it now is, since we improved the drain along here last year.

I was also counting them past me in te reo, and had to keep starting again.  I find it relatively easy to hold "five" in my head as I wait for the next few but for some reason much less so to remember that I'd reached "rima" before continuing with my count. 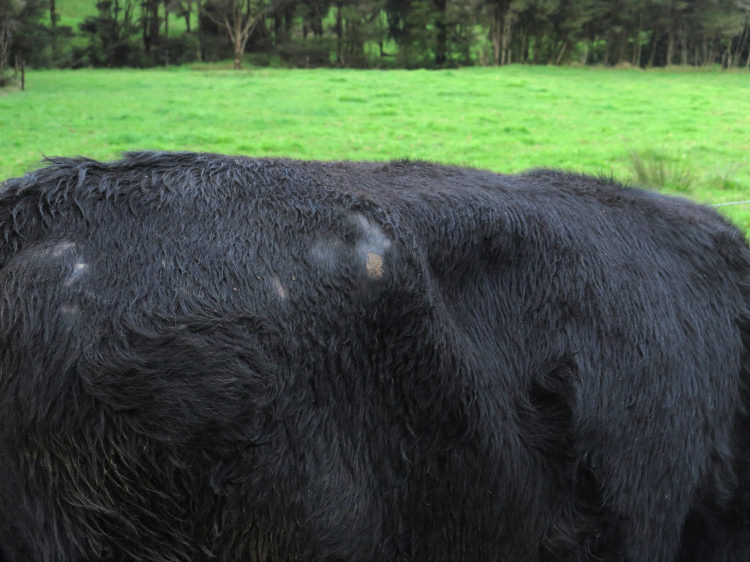 Poor Spot: her skin had healed and darkened in the three weeks since her last oestrus but was now rubbed raw again. 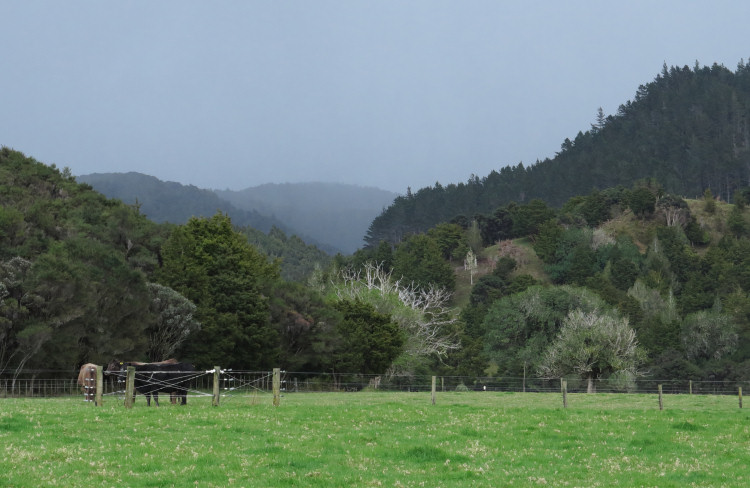 Walking out to move Zella and friends from 5c, I could see heavy rain on its way through the hills and on such occasions am glad of the ugly old truck canopy in 5a.  I waited under it for ten minutes, with my umbrella open in front of me to protect me from the almost-horizontal rain that would otherwise have wet me despite the shelter.