The week beginning the 9th of March 2019.
Saturday the 9th 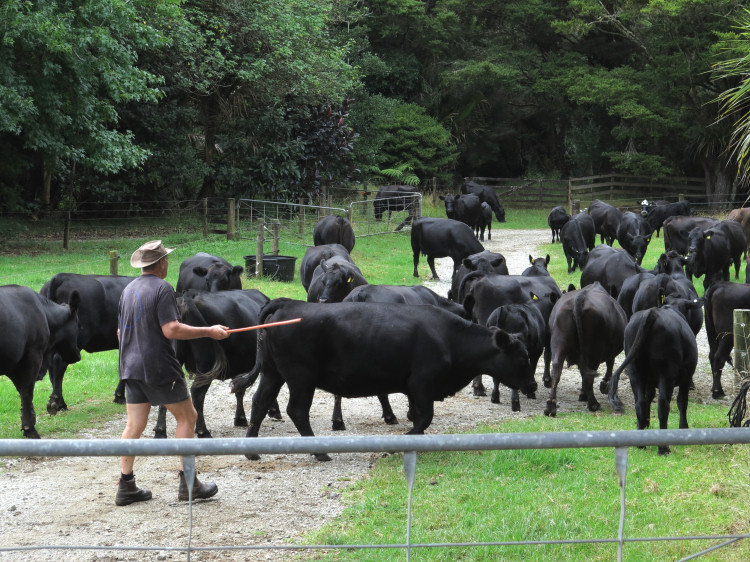 I will be out of action for several weeks from Tuesday and the cows are due to have a copper injection.  Stephan went and got them all in and we walked them over to the yards.

I stayed mostly on the catwalk doing the injections as the cows came through the race, while Stephan drafted the calves out and worked the cows and yearlings up to the race.

I'm glad we've been able to get it done, since they'll be ready for their next shot by the time I'm recovered sufficiently to do it again. 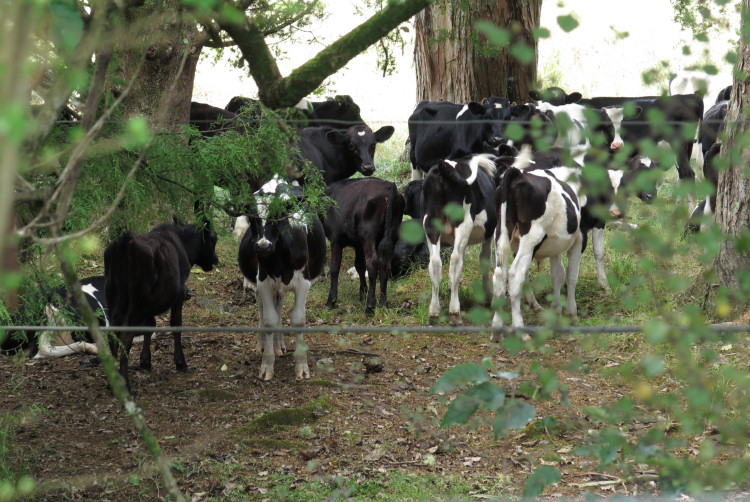 This is why we have double-fenced boundaries.  Look at the state of that little black animal in the middle. 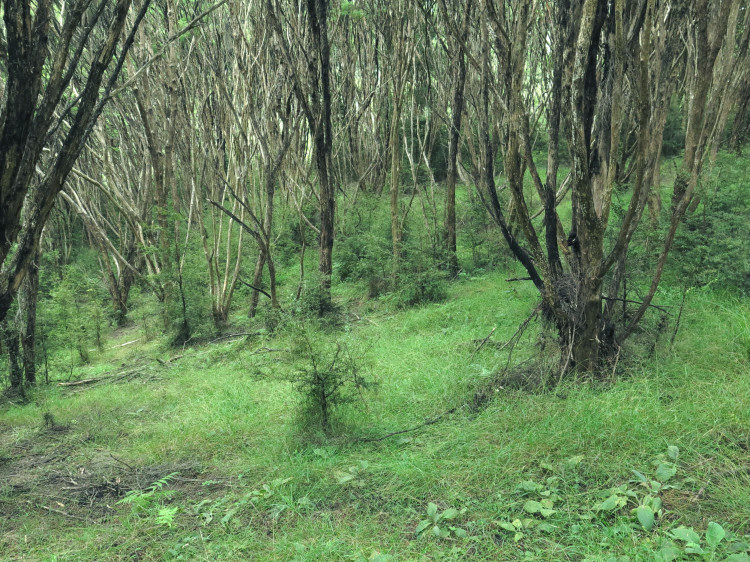 I wanted to go and see how the fencing job was coming along, since I'll miss out on the excitement for the next few weeks.

I made my way extremely slowly, with lots of stops, up through the trees on the slopes of the Swamp East paddock.  Ordinarily I'd bounce up this hillside in about three minutes and today it took me ten times as long.  I've become so gradually used to this disablement that it's now just how things are.  But at least I know it is temporary (as long as I don't konk out in the mean time). 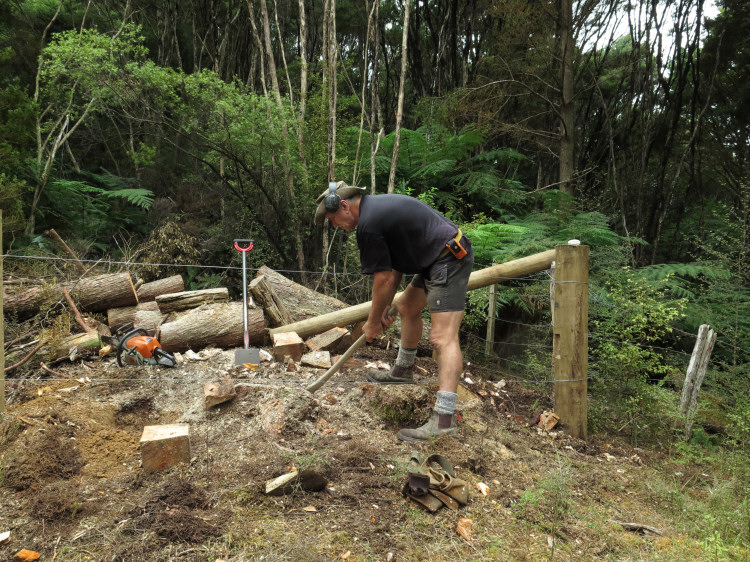 Stephan was hacking away at the base of the enormous tree he'd had to cut down to build the new fence but which was now in the way of the strainer post's stay. 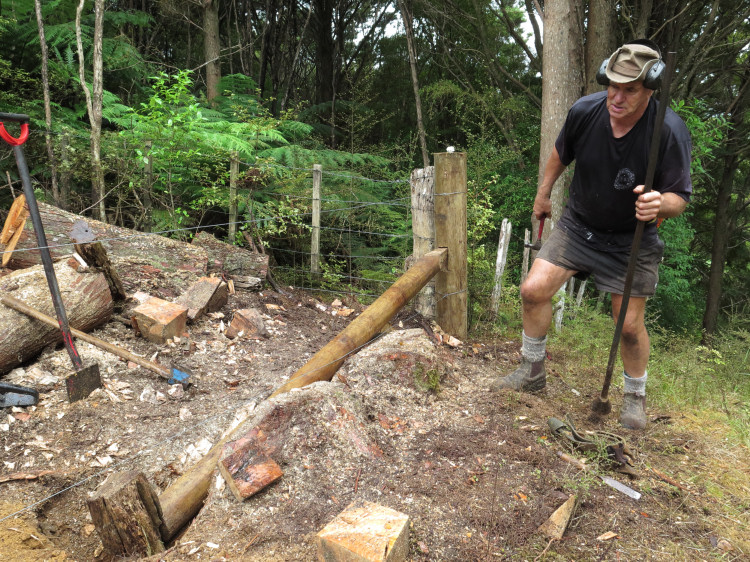 Eventually he'd cut enough for the stay to be installed.

I made my way back down the hill, got ridiculously lost by following the wrong water-course and ended up further upstream than I wanted to be and, feeling really wonky, wondered how long it would take Stephan to find me if I didn't manage to make my own way back out!

For a little while I'm going to discus things like surgery, hysterectomy and sometimes menopause.  You can just look at the pictures instead, if you want - there won't be anything scary there.

For some, hysterectomy and menopause are issues people only discuss behind cupped hands, in whispers.  There seems to be shame and embarrassment attached to both.  But menopause happens to all women at some stage, unless they die before their time.  It's happening to everyone all the time in terms of our attachments to women who are experiencing it but we hardly ever notice until it has direct effects on us.  I've been floating through the phase called peri-menopause for the last few years, not suffering from too much physical disruption but the effects on my brain chemistry have been very stressful at times.

Hysterectomy seems to be similarly shrouded in inexplicable embarrassment or shame.  For some women that seems to be about a sense of losing their femininity, or their reproductive life-meaning.  But I don't sense either of those things myself.  I'm who I've always been, no matter which bits have to go.

But it's still fraught.  I've resisted this major surgery for years, despite several specialist doctors advising it would be necessary.  My recent gynaecological specialist was happy to wait with me, to see if menopause would resolve everything - the large, benign fibroid tumours my uterine cells keep forming, are oestrogen dependent and thus they might have shrunk away once my oestrogen levels dropped with menopause.

The reason for my suddenly necessary hysterectomy, life-threatening bleeding, is unknown.  Something changed late last year (coincidentally when a doctor thought she should prescribe thyroid hormone supplementation for a marginal hypo-thyroid blood test indication) and the steady loss of blood from October made me quite unwell by the end of the year.  That continued and ramped up to frightening levels in the last few weeks, so that I am now in a ridiculously fragile state.

I got up early this morning so I could eat some breakfast before 5am and we left with oodles of time to get to Whāngārei, dropping the faulty electric bike off at the bike shop in Hikurangi on the way.

At the hospital I was admitted to the surgical unit, given a bed to lie in for the time remaining before the surgery.  We found some magazines and Stephan sat comfortably next to me in a reclining chair.

My lovely surgeon came in and told me that she presumed someone had told me (they hadn't) that she would have to operate via a vertical incision in my abdomen, rather than the more usual horizontal one, because of the size of the aforementioned fibroids.  I found that change in the approach I'd assumed was to be taken, unsettling.  We had a mad conversation about my having bought a bikini last year and never having had the chance to wear it yet.  She said that in that case, she would use sutures rather than staples, so I have a tidier scar.  Nice woman.

Surgery was delayed by the theatre being in use for an emergency C-section delivery and apparently I was almost bumped off the list, except for my surgeon's insistence that she was going to do me; someone else had to go home again and wait for another day.

On the way to theatre I cried in relief at having made it to this point without a frightening emergency, in grief that it had all come to this, and in terror that my second general anaesthetic in three weeks might carry a greater risk to my safety and that I might not wake up as I am.  Poor Stephan, who was then awake through the next few hours while I was not.

All went very well, without complication and at some stage I ended up in a different ward than my last stay because the anaesthetist had inserted an epidural as part of my overall pain relief, requiring a different level of care in the hours after surgery.

Stephan stayed with me until mid-evening.

We had agreed that we would talk early this morning and Stephan would come back down if I wanted him to, but I felt he was better staying home and getting on with his pressing project!

The second half of the first boundary section is now all wired up and ready for battening.

I ended up having a very uncomfortable day, the epidural drug Fentanyl causing dreadful itchiness all around my torso.  A reduction in the dose and provision of antihistamines only partially relieved it but the nursing staff were keen for me to continue with it until the following day.

The less remembered about today the better.  I spent much of the morning waiting for the epidural to be removed to stop the itching, but then my pain relief as the effect of the epidural faded was poorly managed and I pain-pumped so much morphine to try and control it that the world rolled for several hours.  (The pain pump limited the dose and I could only make it work every five and a half minutes for another shot, which wasn't enough for the pain but more than my brain and visual abilities could cope with.)

Back down to the other ward I was in two weeks ago, now that I no longer needed nurses with epidural skills.

Stephan and Christina turned up at some point before or after the move (it's all a Tramadol-induced blur).  While they popped out to get some lunch, the woman in the neighbouring bed exclaimed about the shooting news from Christchurch.  It all seemed beyond belief but we stopped talking about it quite soon afterwards because someone else had just been brought in from theatre and it seemed kinder not to be discussing such a topic in the presence of someone who might not be quite in their right mind yet. 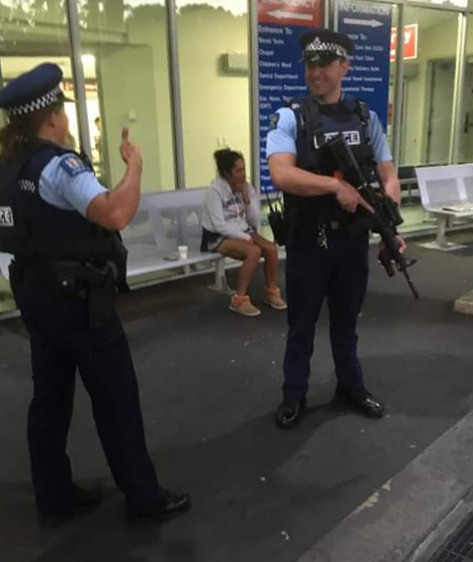 In the evening when she and Stephan left, Christina sent me this picture from the front doors of the hospital!  Every government institution reportedly had such a guard this evening.

I wasn't sure whether I felt reassured or alarmed: it wasn't as if any of us could move very quickly to hide behind the curtains if some armed crazy person came storming through the hospital - curtains naturally deflect high-calibre ammunition, didn't you know?

Drugs.  They addle the brain.