The week beginning the 12th of September 2020.
Saturday the 12th 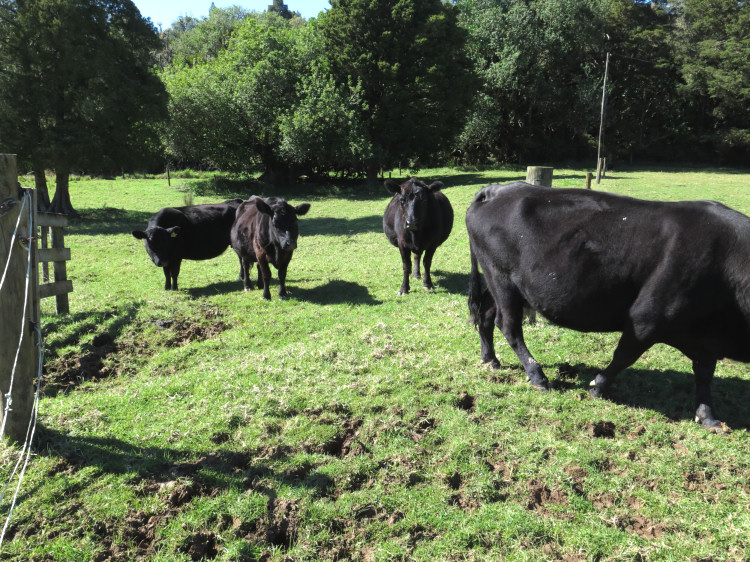 The four thin cows spent the night in the triangle at the bottom of Flat 1 & 2 so they'd be beside the heifer mob before joining them today. I hoped that would reduce the violence of their meeting, having not been in the same mobs for some time. 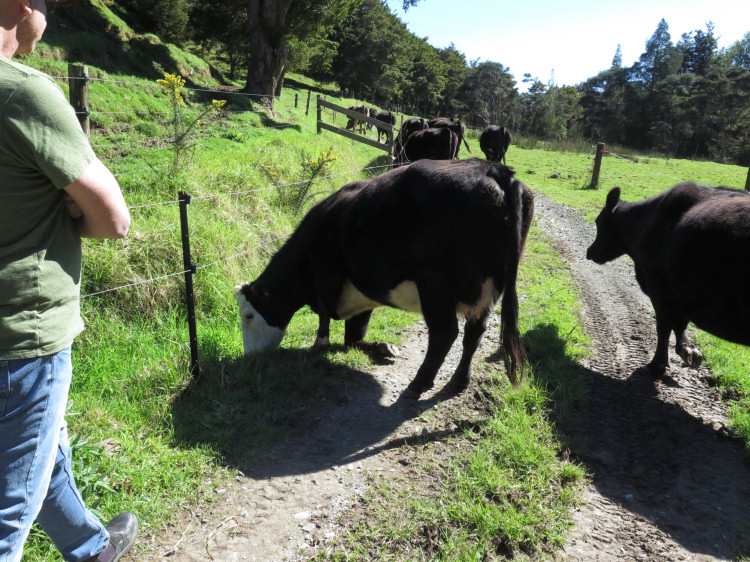 Cathie, Andrew, Stephan and I wandered quietly along behind the 12 cows, who'd not gone all the way to their paddock yesterday but spent the night half-way along the lanes.

Andrew watched 746 doing her usual thing, here about to kneel and reach under the drain fence for the long, fresh grass there. 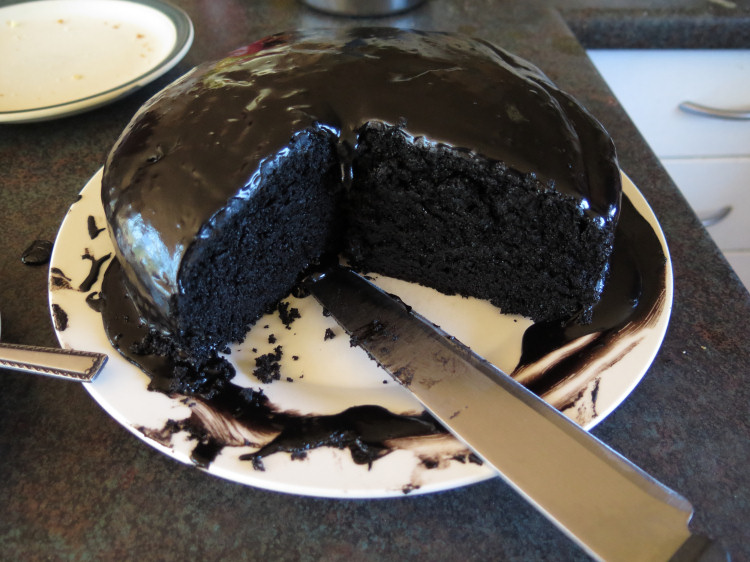 Stephan made me a birthday cake using some black cocoa sent to me last week by Fran and L-J. The cake and icing were almost black in colour!

Of course there were no candles: candles and blowing all over cakes are now, I am oh so thankful, things of the past. Not having had children, my tolerance for others spitting on my food has decreased as time has passed.

[I'm still quite keen on people taking cakes out into the garden and beating the fire out with spades, but that was a one-off I still remember with great mirth (some of these details may not be entirely correct and I'm willing to change them if other people with better memories get in touch): at Muriel's 75th birthday, Sarah made a beautiful cake but put all the candles on a pretend (polystyrene) cake so the real cake wouldn't be spoiled by melted wax. But by the time the last of the 75 candles was lit, the first had burnt right down and before Muriel had time to begin blowing them out, the polystyrene had caught alight and the whole lot had to be taken out onto the driveway and extinguished. It was tremendously funny and enjoyed by all, since no burning bits were dropped anywhere and nobody was harmed in the process. The photo of Stephan and I on our "who we are" page is from that day.] 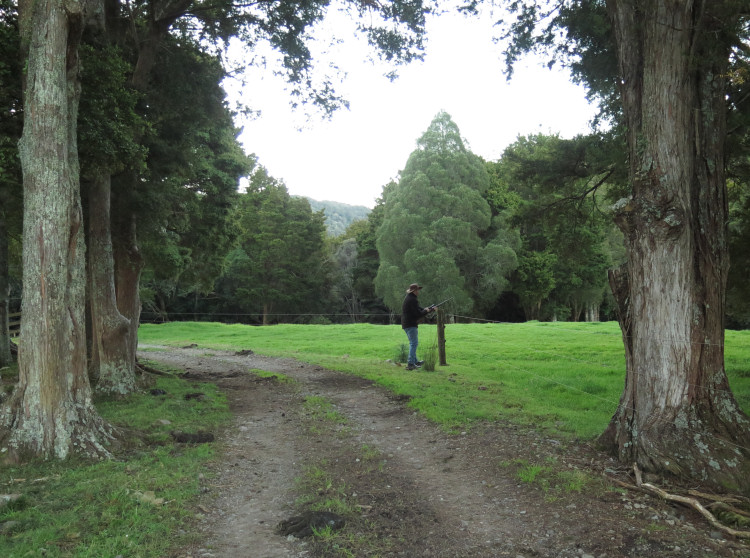 Before dinner I went out to do something I've failed to write about in my notebook but took Andrew with me with the ·22 rifle, to shoot some rabbits. It was a bit World War III-ish but he got a couple. They went in the freezer for trap bait.

Dinner was the usual fare, a fabulous meal of glazed ham preceded by my mother's Pamir Restaurant Golden Soup (a carrot and orange soup adapted from a recipe for potage crème d'or in the Cordon Bleu cookery course books), followed by the always spectacular Crème Brûlée. 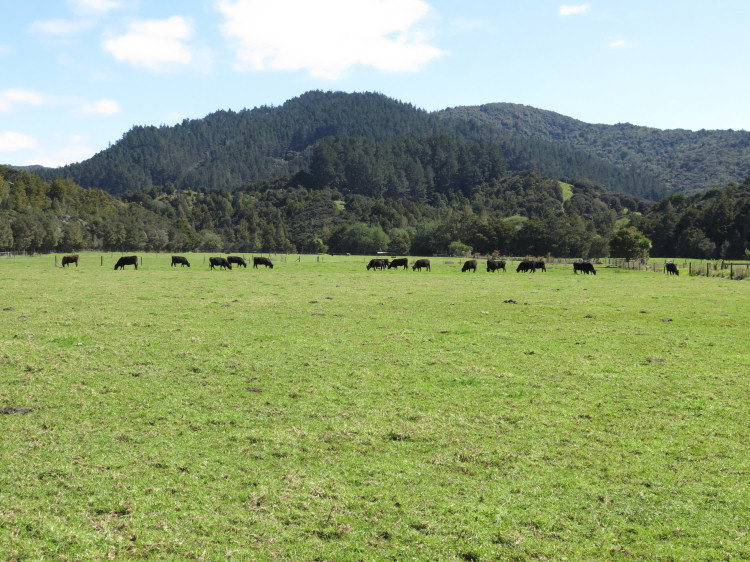 A beautiful day on the flats.

Elizabeth came out with a magnificent chocolate, cherry and fresh cream gâteau Sarah had made for me before going home this morning. (Auckland currently being under Level 2 Covid 19 restrictions, they decided not to come out to see us.)

So much cake! We had to start work on that immediately! 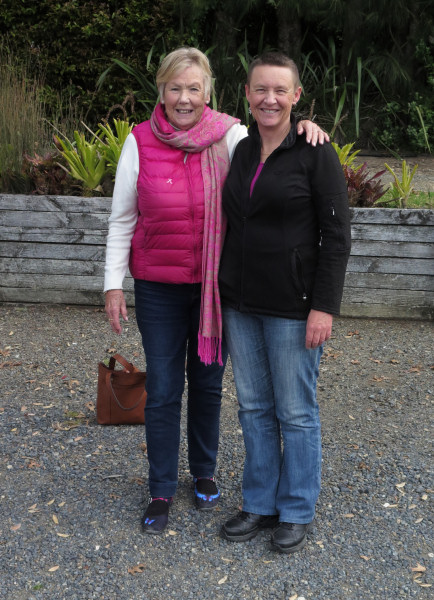 One of the people we were going to visit on our defunct Wellington-and-north holiday was Kay, long-time friend of my mother, Jill. When I was arranging it all Kay said as long as we came before they went away, our plan would work but when we couldn't go it occurred to me to ask how far north on her own planned trip she and Hallam were to travel. Kerikeri, indeed.

Today we arranged to meet at the Marsden Estate for (a very expensive, bearing in mind we've recently spent nearly all our money, but delicious) lunch with Kay and Hallam, their two local friends and the couple with whom they were travelling. It was great fun catching up with Kay, beside whom I sat so we could swap stories and more recent news and join in with the conversations of the others.

Kay told me that she had not known my mother before Jill arrived in Auckland in August 1962 but that the headmistress of Marsden Girls', Miss Ogle, had asked her to take this newly-arrived young teacher from England under her wing when Jill disembarked from the Wonosobo, the freighter on which she and eight other passengers had travelled. So Jill went to Kay and Hallam's wedding on her first weekend in the country, then Kay thinks she caught a train to Wellington where presumably she began teaching in the third term of that year.

Jill was a brave young woman, not unlike one of my paternal foremothers 104 years before her, taking a long trip on a ship from one side of the world to the other without much knowledge of what she was going to, nor the people she'd meet on the way and in her new home. In the correspondence I've had with another of Jill's friends since her death, I have discovered that she went, in that first summer holiday to Sydney, presumably by plane, although I only know one detail about that trip, that she rang three quarter peels at St Mary's Basilica. The first was on Sunday 30 December (1260 changes in Plain Bob Minor), recorded in the Ringing World as her "First quarter in Australia", the second the following day on New Year's Eve (1260 Single Court Bob Triples), and the third four weeks later on Sunday 27 January 1963 (1320 Kent and Oxford Treble Bob Minor), all on the second bell and the last recorded as having been "Rung as a farewell to Jill Swanne on her return to New Zealand after a holiday in Australia." Presumably she rang at the other four (I think) towers in Sydney as well during her stay. Ordinary ringing sessions (usually a weekly practise session as well as Sunday church ringing, weddings, funerals, etc.) are not recorded as events as peels and quarter peels are.

I wonder if she went with others on that holiday across the Tasman?

On our way down to Kerikeri, a trip that would normally take only a bit over an hour but today nearly two around the coast, we participated in the Māori Language Commission's te reo moment at noon. We were on our own but we'd been having a te reo hour to feel like we'd given it a proper go! 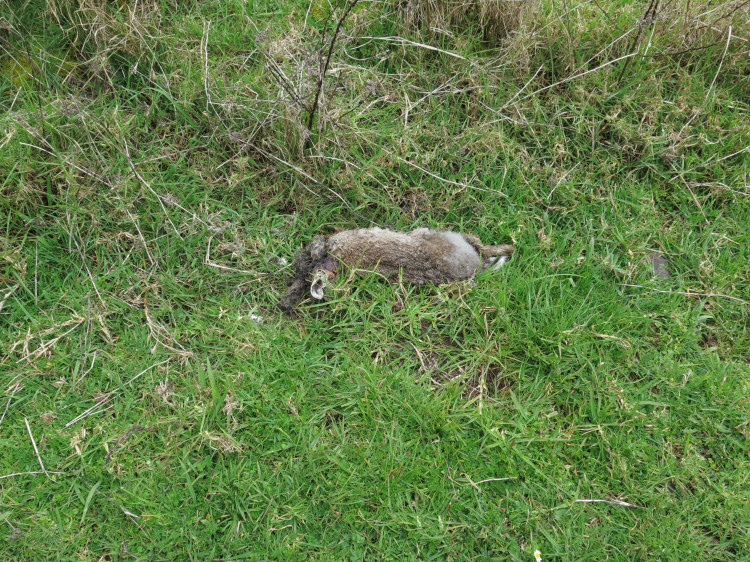 This is the second dead rabbit I've found here in the lane between Flats 3 and 5 in the last week. Some disease must be going through the population again. 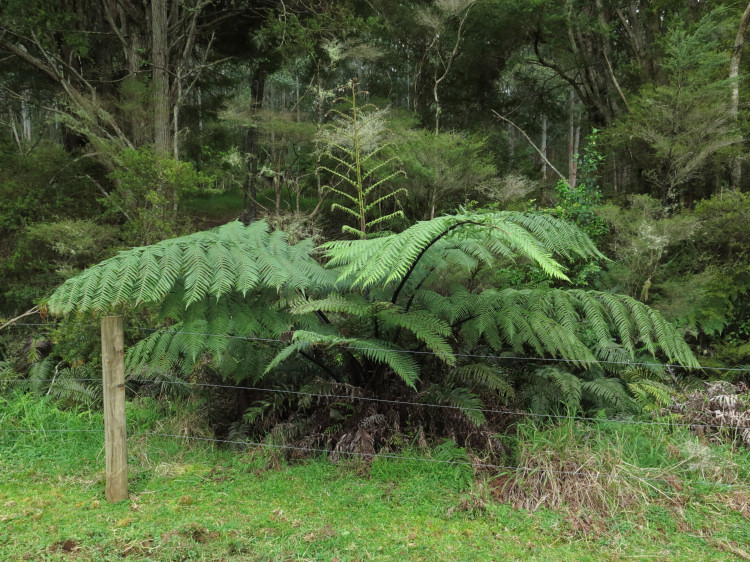 Out to see the cows in the Spring and as I approached the stream crossing to the paddock, I disturbed a Mallard duck and her two or three tiny ducklings. I heard them further upstream a day or two later. I thought to myself, Madame Duck, you do yourself no favours with your loud calls of alarm, when I would hardly have noticed your presence had you remained silent!

This lovely tree fern caught my eye, in the riparian strip at the bottom of the hill. In the two or three years after we fence of sections of stream, this sort of growth really takes off and the ferns at this stage in particular, are very beautiful. 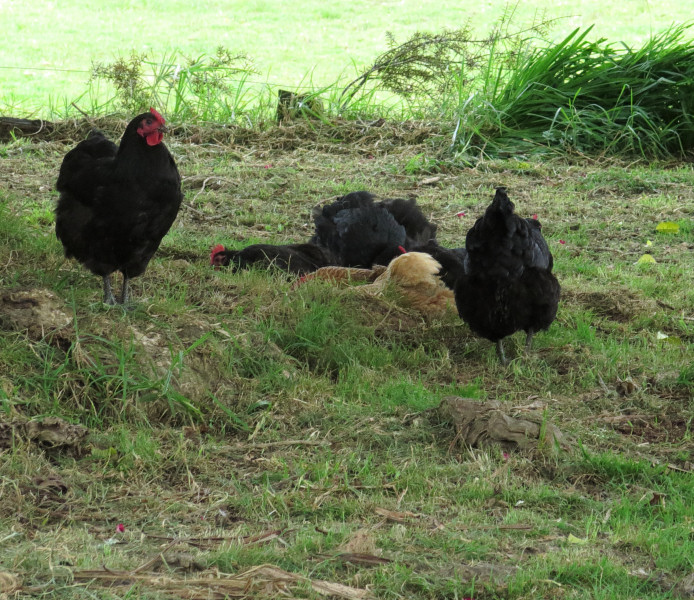 We let the hens out each afternoon and they spend a lot of time dust bathing in one spot under the big Puriri tree. Dust bathing appears to be very important and extremely enjoyable for poultry.

This morning I received an email from MetService advising that La Niña conditions are now observed in the Pacific Ocean, which may mean increased rainfall for us during the summer. A wet summer would be much easier to manage than a drought, even though it's not nearly as cheerful. Mind you, constant anxiety over feed levels and the condition of the animals is not conducive to cheerfulness anyway, so I'd rather have the rain. 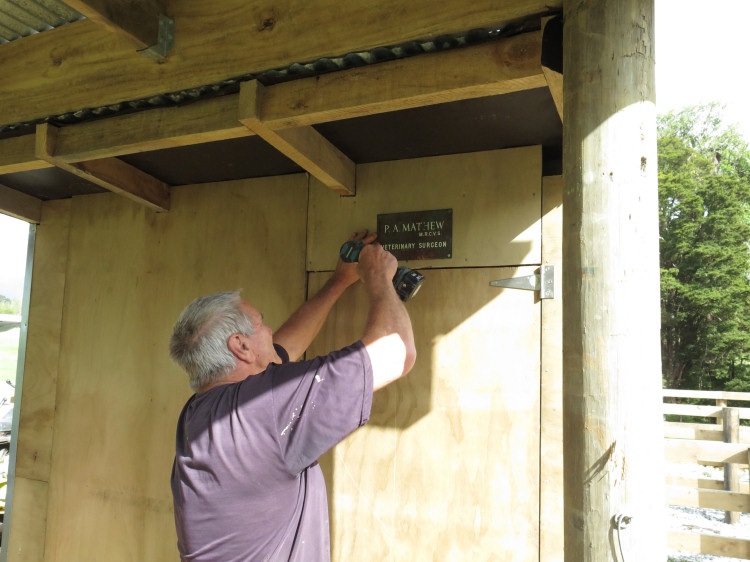 When Stephan's brother Richard died, various things came here from the house in Larmer Road, where Muriel had lived until she died and Richard moved in, including Patrick's copper Veterinary Surgeon plate.

Stephan and I had talked at that time of putting it up somewhere around the farm and today the appropriate place suggested itself and so there it now is. We'd never have done all these things if not for Muriel and Patrick. 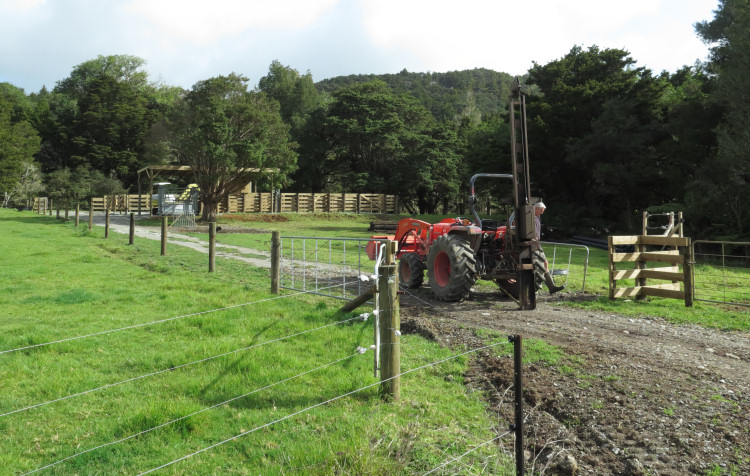 Today Stephan began working on the other fence for the laneway leading to the yards. 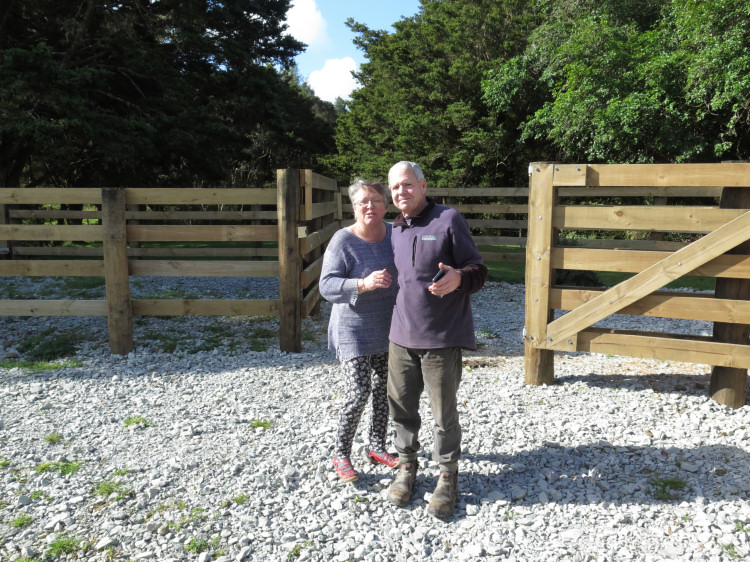 In the afternoon Gaye and Brian came for another look at progress on the yards and were suitably impressed. 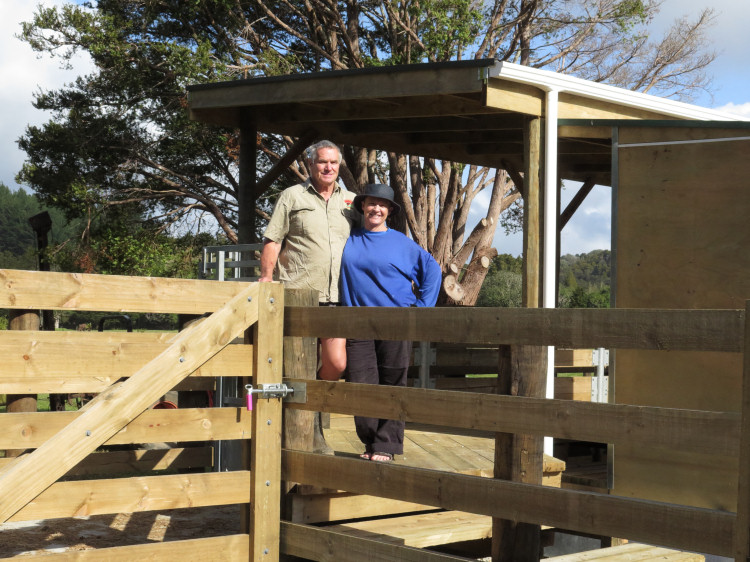 So much so that Gaye insisted on taking our photo. 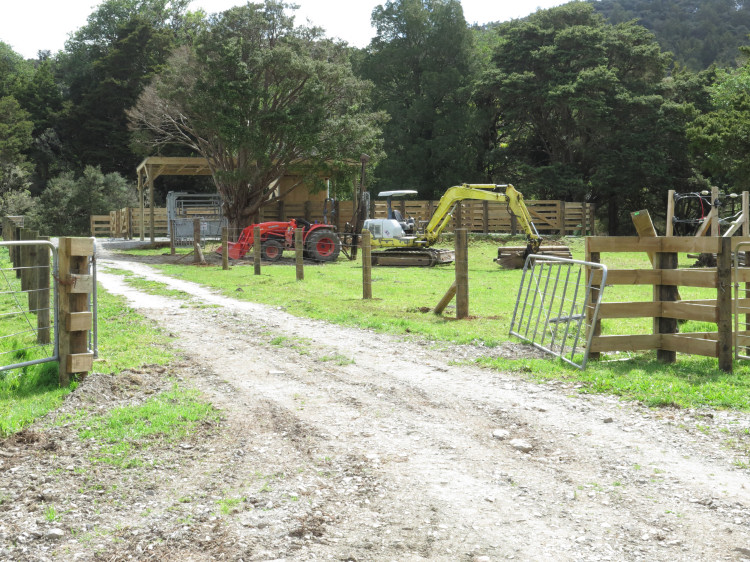 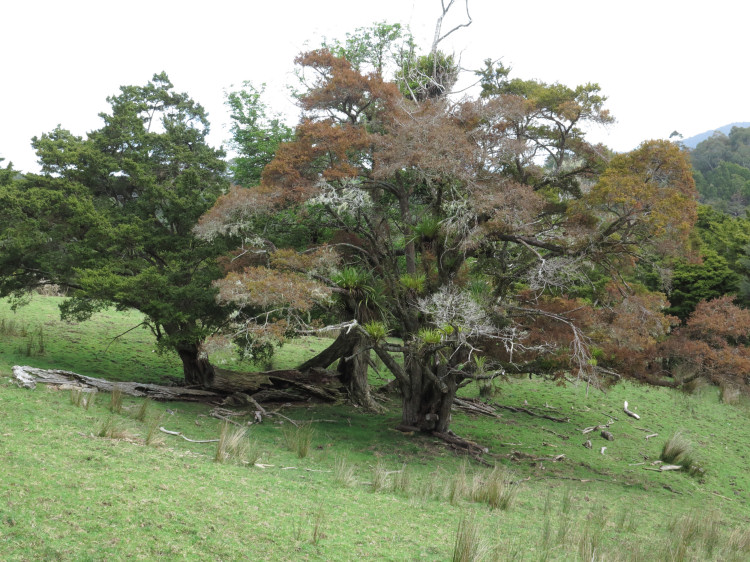 Stephan came out with me to find the bulls in the Big Back North again and this time we did go the wrong way and saw nothing of them for most of our walk, only hearing one of them calling when we were on our way back down the hill, when he was probably by then down at the gate.

Tōtara seem like very robust trees but several around the farm appear to have been killed by the drought. 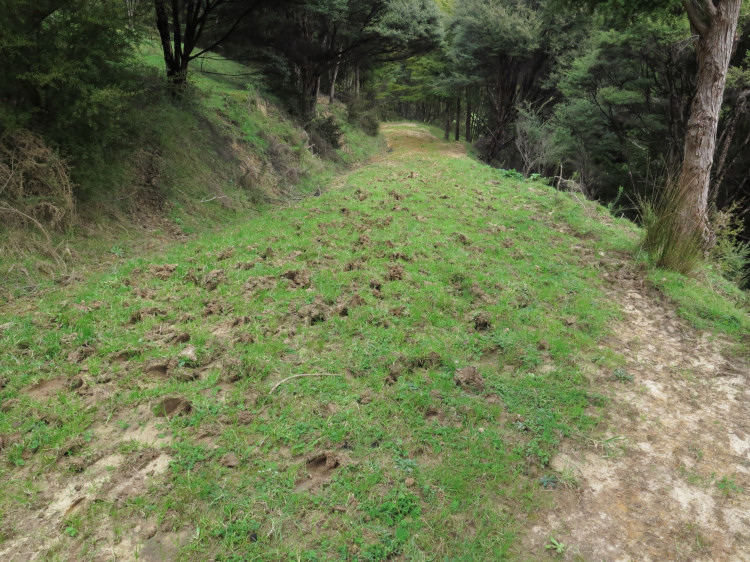 Evidence of a recent down-hill gallop: these fresh hoofprints weren't here when I walked up this bit of track... 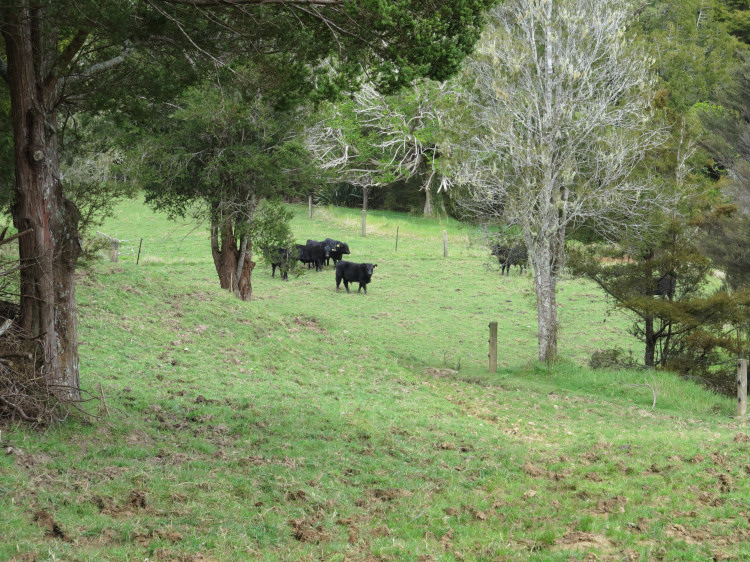 ... and there they all were, down by the trough.

If we'd waited down here for a little longer before going to find them, they'd have found us. No matter, it's always lovely walking around this place.

When we'd seen everyone and given some of them some hay to boost their feed levels where they were grazing, we left home and headed south to Kate and Geoff's: the new ute will be ready for us to collect from Whāngārei tomorrow afternoon. 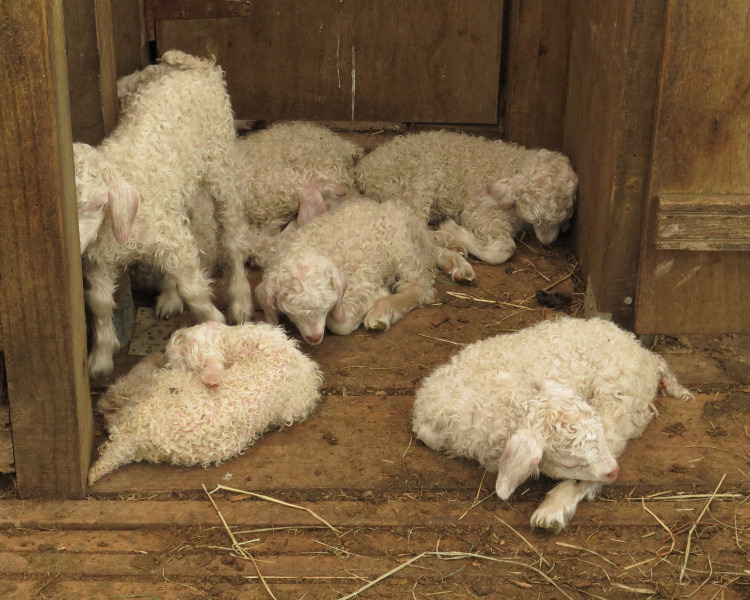 Kidding began a few days ago and there were lots of these soft little creatures lying around sleeping while their mothers were out grazing this morning. 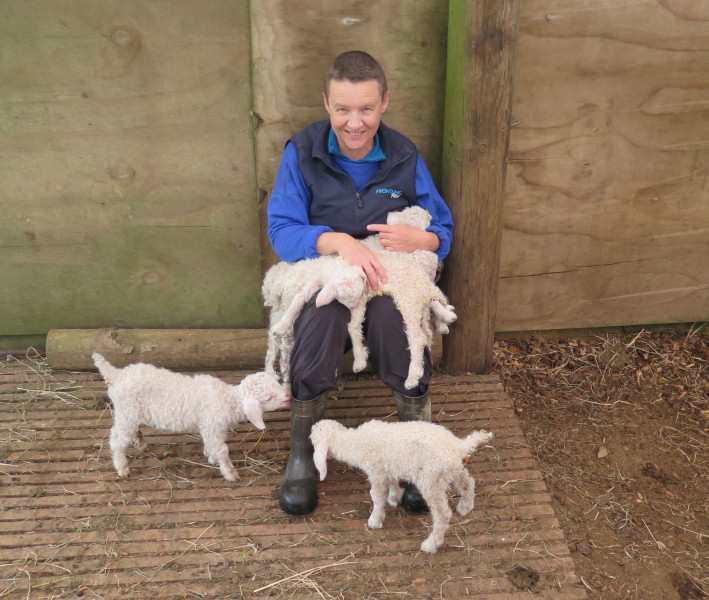 I still wasn't permitted to bring one home, even though I could just about have tucked one inside my jacket. 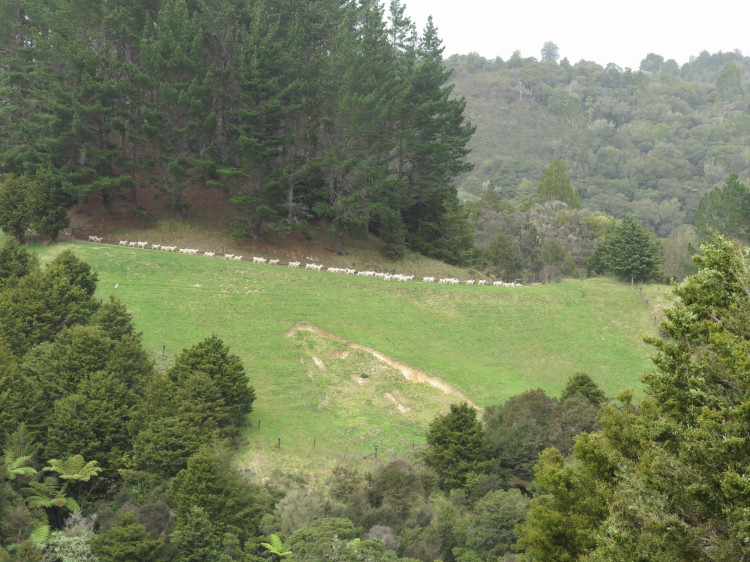 Outside when it began to rain the slightest bit, I watched with great amusement as the non-breeding flock streamed away from their grazing area, back toward their big shed on the other side of the gully. Goats don't like rain.

In the early afternoon we set off for Whāngārei, signed various bits of paper and then I drove carefully out of the dealership, following Stephan so I didn't have to think about where I was going while becoming familiar with the new ute. Just out of town I overtook him and was interested, as we travelled along the Old Russell Road, to see him drop quite a long way back behind me: we've both become accustomed to driving at a sedate speed in recent years, as the red ute aged and everyone else seemed to drive faster and more crazily. In the new ute I was rounding corners and barely noticing them because of all the clever driver-assistance technology in the new vehicle. No wonder everyone else seems to be going so fast; it's because they can without getting into too much trouble.

Stephan hasn't driven it at all yet. Kate understood that entirely; Geoff seemed shocked.