The second part of the week beginning the 17th of October 2020.
Wednesday the 21st 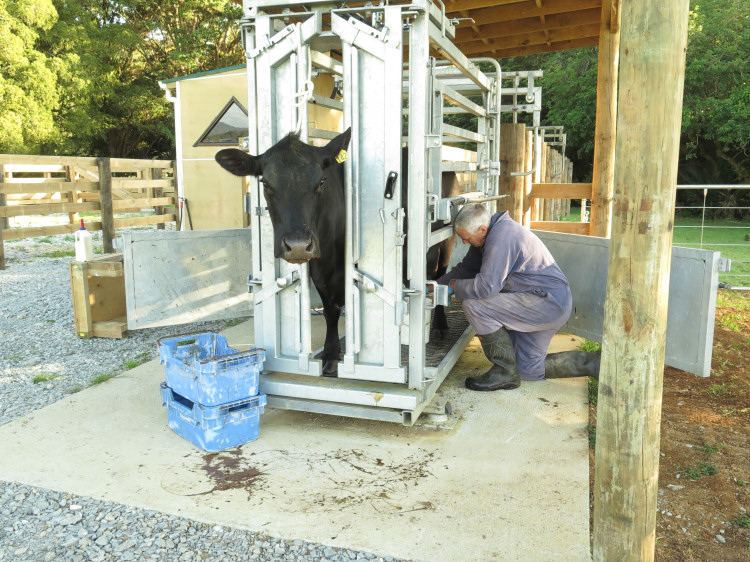 Back to the crush for Gina early this morning.

She had nothing coming out of two teats, her front left being the one I had earlier thought the calf had fed from because that quarter seemed less full; but perhaps it has become non-productive already. She has way too much milk anyway, so I'm not worried by that at present. One of the rear teats wouldn't flow because it was blocked by blood clots. Stephan eventually cleared it and relieved its pressure again.

The nearly-full bottle of calf milk is sitting undrunk because the calf is either not feeling very well, or has drunk enough of whatever she could this morning. I'll see how she is this evening. 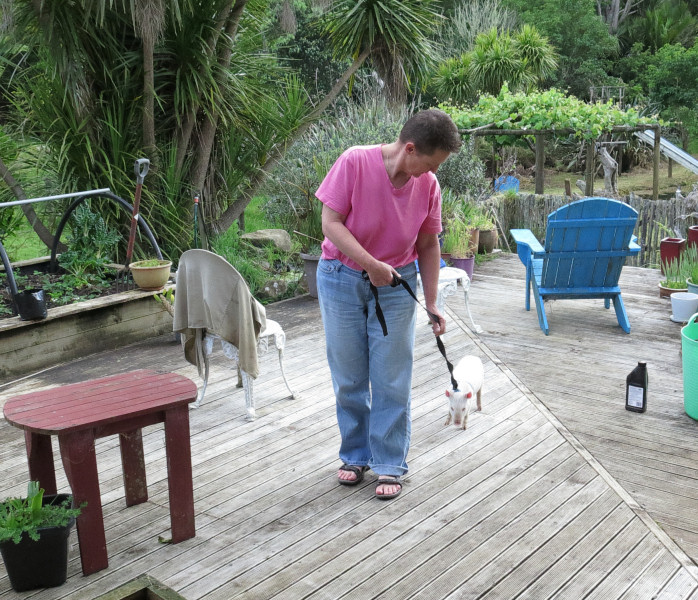 Apparently you can train a pig as well as a dog. I'm not entirely convinced, but it's worth a try, because he'll be a big pig before very long. 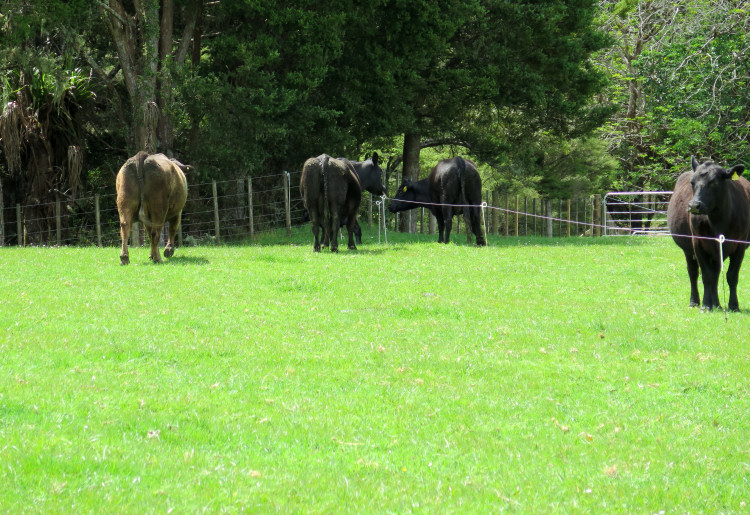 I went out to give Gina's calf a small drink, found her suckling one of Gina's rear teats. I think continuing to give her some milk is wise, if most of what she's getting otherwise is blood.

Continuing up the track alongside the Windmill paddock I looked across at what appeared to be a disturbed huddle and realised that since there were three calves asleep in the sunshine, the one around which all this excitement centred was new. 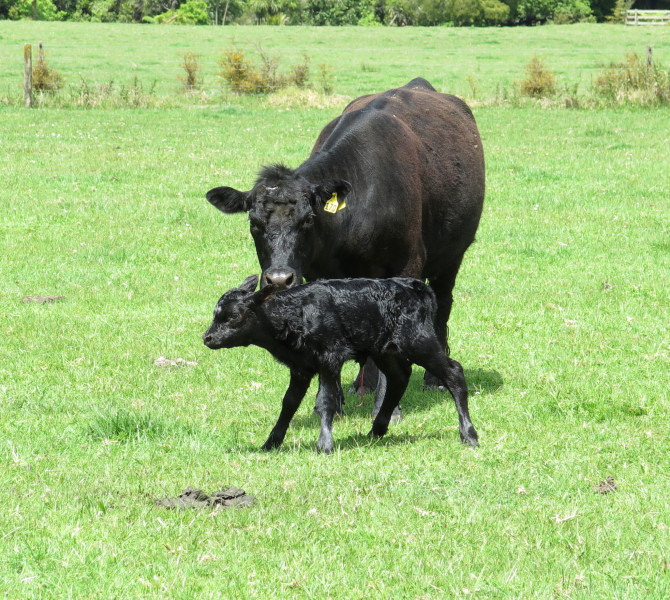 Dushi had produced a daughter and I hadn't even noticed!

Part of the fault was with my spreadsheet which had misled me into thinking she wasn't due yet - for some reason the number 266 had replaced the date-related formula telling me today was day 273 in her gestation. Even if it had been correct, I still wasn't expecting her for another two days.

The calf is a heifer and is a much-anticipated calf this season, being sired by Schurrtop Reality X723, the sire of Joe 90, Reality 89 and Mr Big 87. I really liked those bulls and had kept the last two X723 straws in the bank since then, waiting until I had a good and unrelated animal in which to use him again. 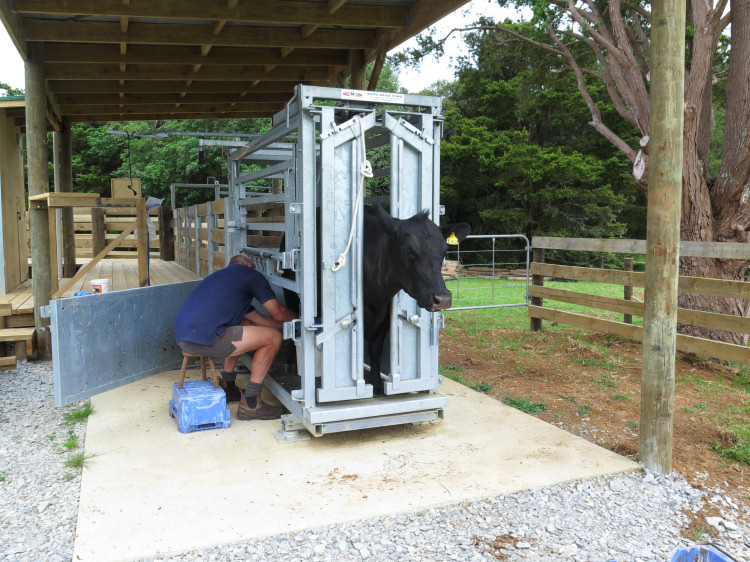 Stephan remembered to bring a stool with him for this evening's Gina milking; easier than kneeling or squatting on the concrete.

Gina was good, now knowing she has to go in to the yards and circle around to the race and up into the crush.

We had wondered how the bottom half-doors would work with safety stoppers preventing them from opening any further than this but because a cow with her head in the bail is standing so far forward, there was ample room to sit and work, or to have guided the calf in to the udder had that been our aim.

The calf was curled up nearby, looking a bit sad, smelling pretty bad, with bloody poo and flies bothering her. The blood she's drinking isn't being digested so is going straight through her. But she didn't want to drink from the bottle and when the two of them went out to the Windmill paddock to join Dushi, the calf was running and skipping around her mother, so I was not particularly worried about her: she's looking better than she was. 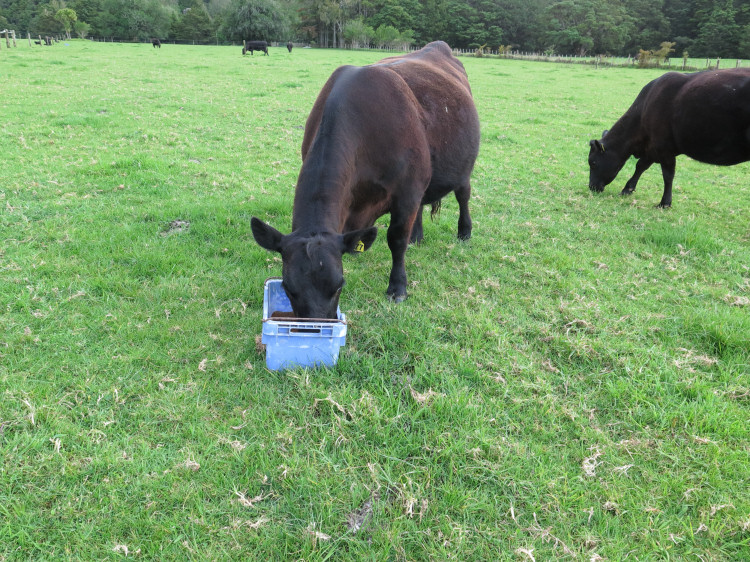 A heifer who likes molasses! This doesn't usually happen quite so readily. I wonder if she got a taste of it as a calf or yearling?

Gina's udder was still producing blood this morning but was a bit less tight. This morning was the last time we brought her in to ease her udder. 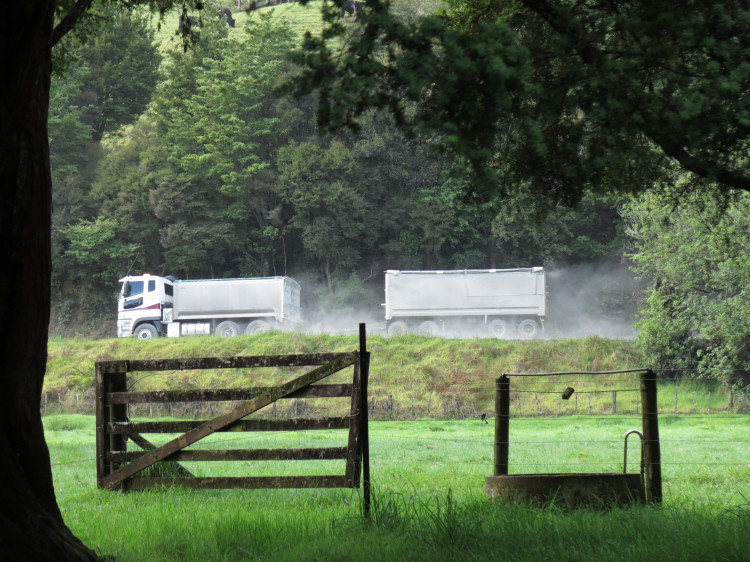 Huge metal trucks have been thundering up and down the road for the last couple of weeks, laying roads in the forestry blocks up the top of the valley (as we later found out).

They make a tremendous noise when they're empty, crashing and booming their way along the road, audible from several kilometres up the valley and noisiest as they thump through the holes and corrugations in the corners just past our gateway. It's a disturbing racket. 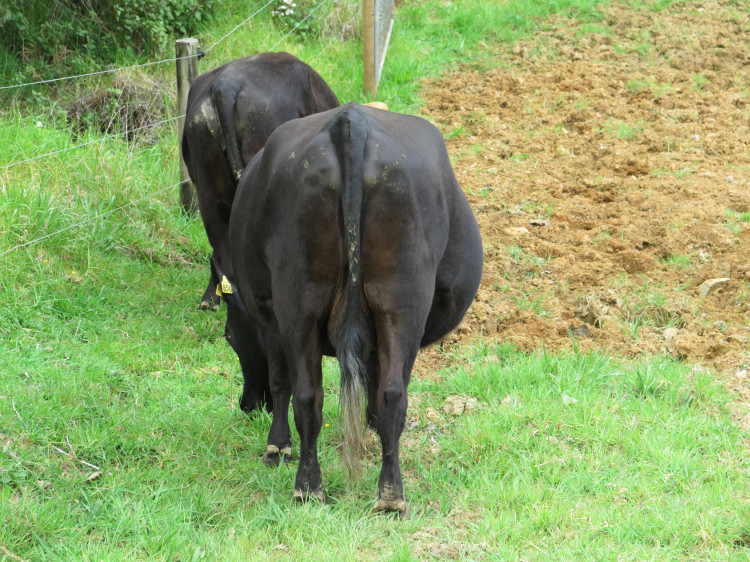 This is Zoom, looking fat! Last summer, under the stress of drought and feeding her very good first calf, she got quite thin. 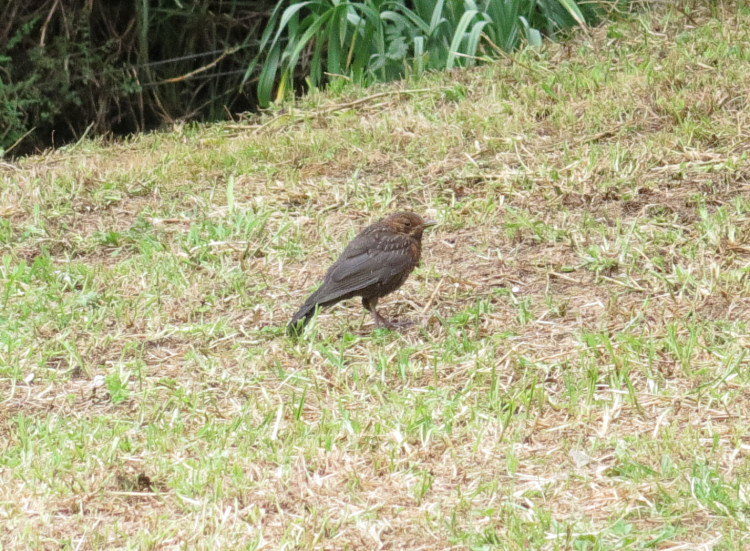 Ronnie came for lunch, bringing some rings for the pig's nose and her expertise and we had lunch down by the pond.

A fledgeling Blackbird was hopping around down there, looking very unwell. Its parents came and went with food but I suspect their investment may not pay off. 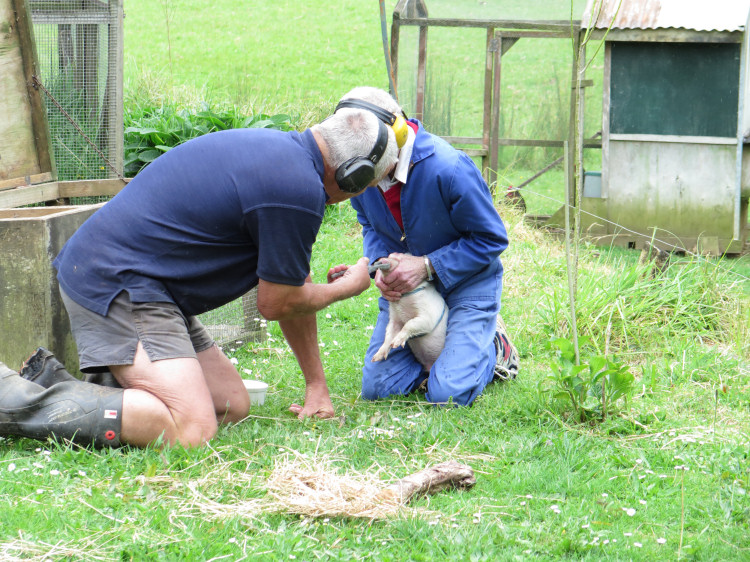 After lunch and a trip to inspect the yards, Ronnie and Stephan did terrible things to the piglet and he hated it. But if you don't put a ring in the nose of a pig, it will plough through every bit of ground to which it has access and when it is being fed on other foods, it simply doesn't need to be causing that much destruction for its survival. 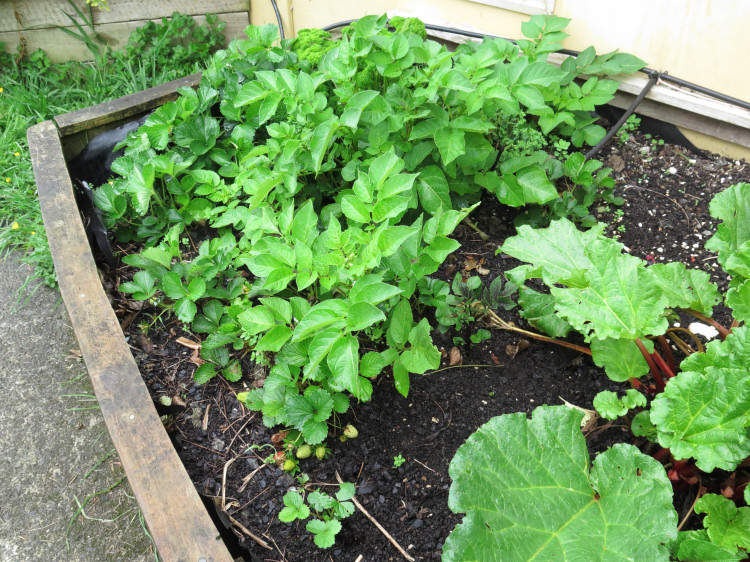 The strawberries are going to be over-run by the potatoes and rhubarb in this garden! 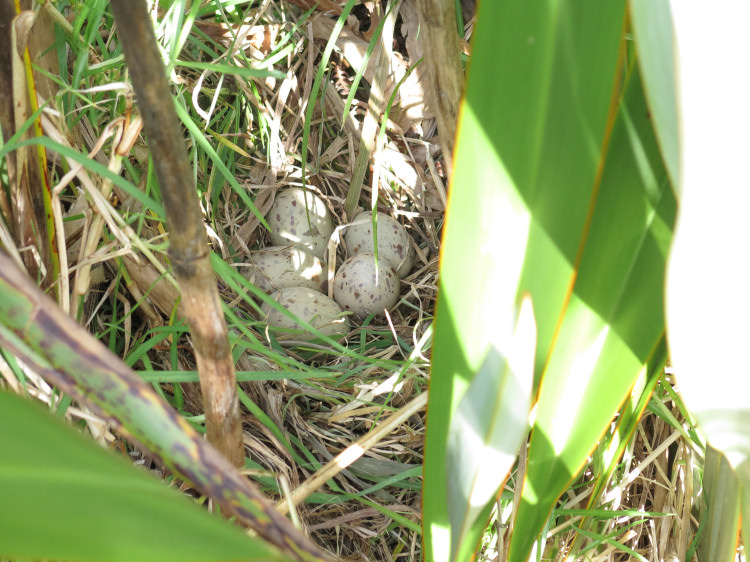 I had a look on the island when wandering around the pond this morning and found a nest of warm Pukeko eggs. 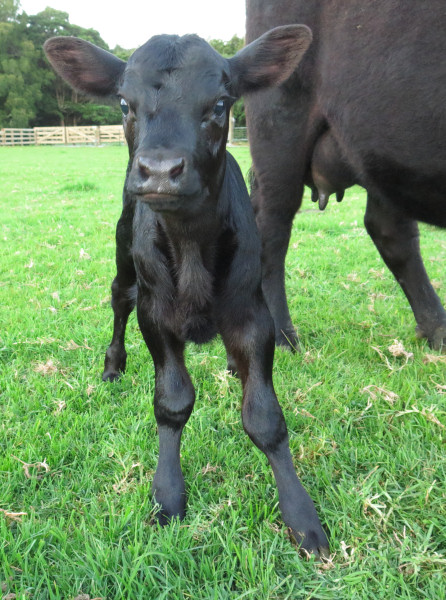 Dushi's daughter has an interesting hair parting on the right side of her face. 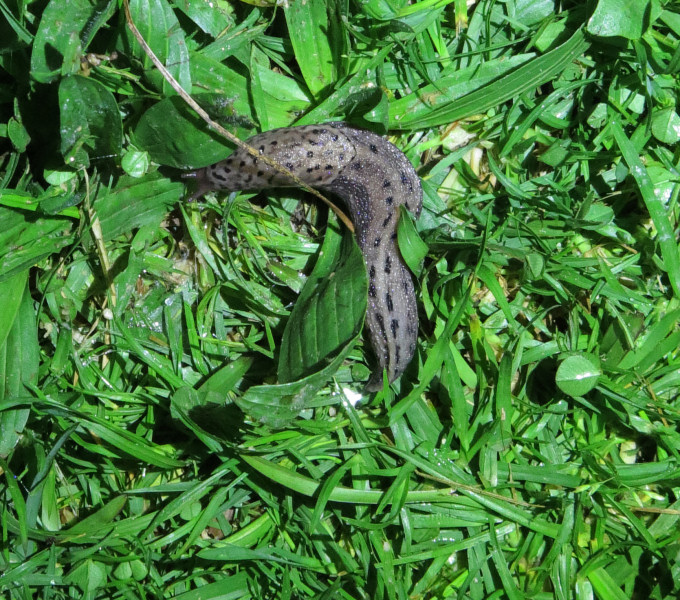 Checking on Al this evening, now sleeping outside in a larger cage than his inside accommodation, I found half a dozen of these enormous slugs crawling around on the grass inside the cage. I don't remember ever seeing these here but I found one in town last year one evening and was astonished by its size; they are the Leopard slug, Limax maximus, a European species.

I wonder why a group of them has been attracted to the piglet in the garden? It reminds me of the story I heard as a child of ancient observers concluding that flies were created from rotting meat, since that's where they saw maggots appear. This piglet has spawned slugs!