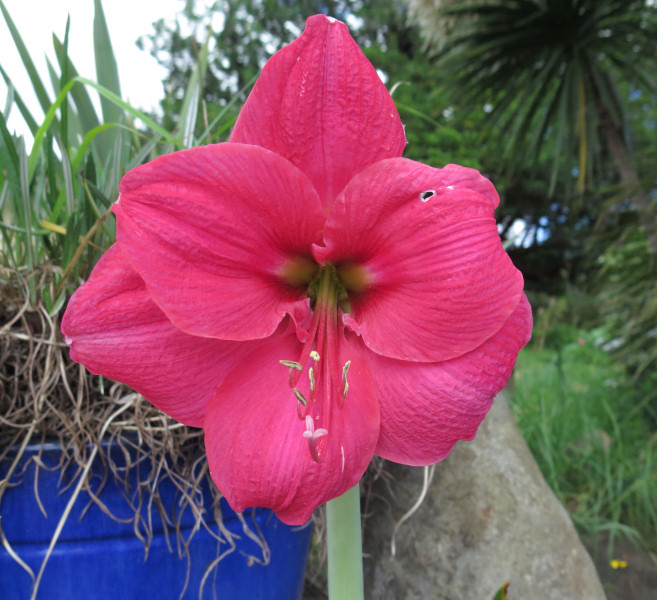 The Amaryllis in full bloom; unfortunately the other flower has been chomped by a snail.
It's not my favourite colour but it's an impressive flower. 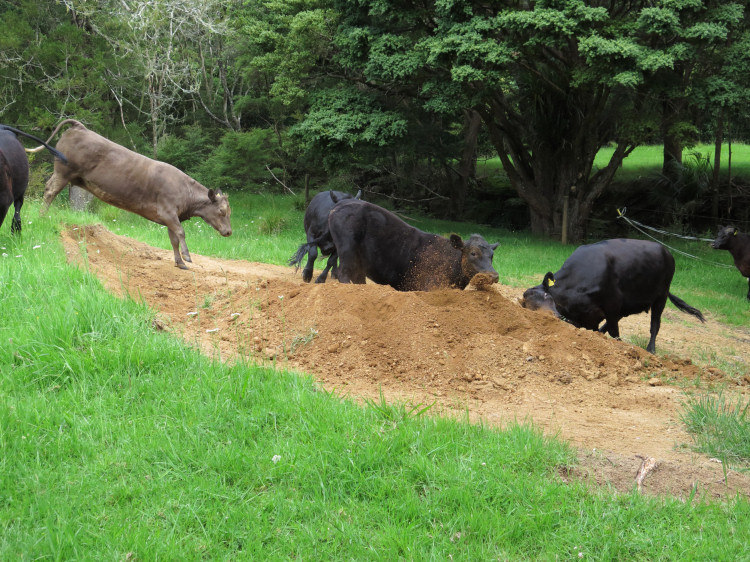 We brought the non-calving mob back from Over the Road this afternoon and they came along the track to the Tank paddock, where Stephan has recently been moving some soil and had left a loose mound for his next trip with the front-end-loader.

The cattle enjoyed it immensely and it was soon far less peaked after being thrown around and burrowed into by many of them. 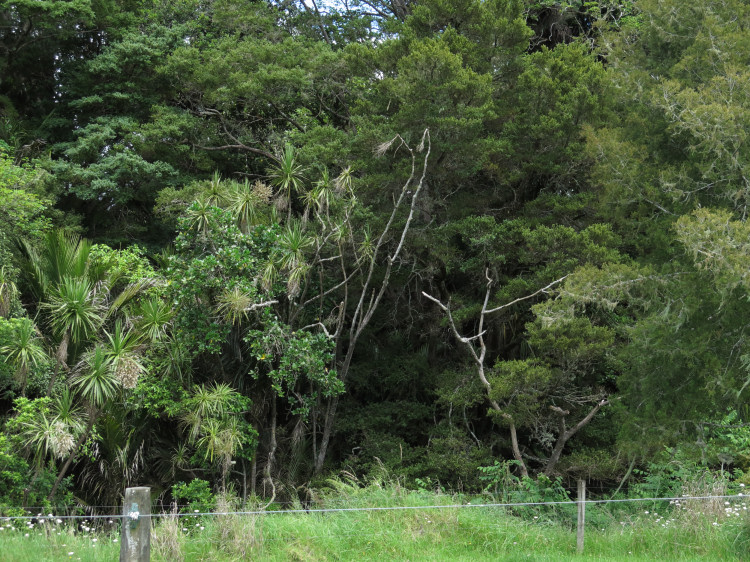 There is much in our environment we don't notice on a daily basis, until something changes. Here I noticed something odd as I came along the track: the big old Tī Kōuka on the stream bank looks to have contracted Sudden Decline and now appears in poor health.

It takes years for the trees to become so tall and so branched. 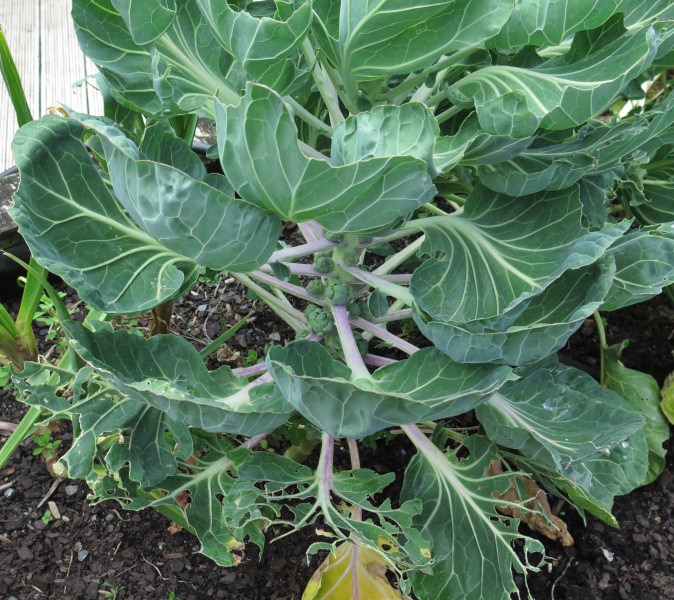 Stephan is delighted to have been able to grow some Brussels Sprouts. Everyone said they wouldn't grow here because the weather is not cold enough. But they were sold as seedlings locally and they have indeed begun producing the micro-cabbage bulbs up their stems (there are three such plants in the garden). 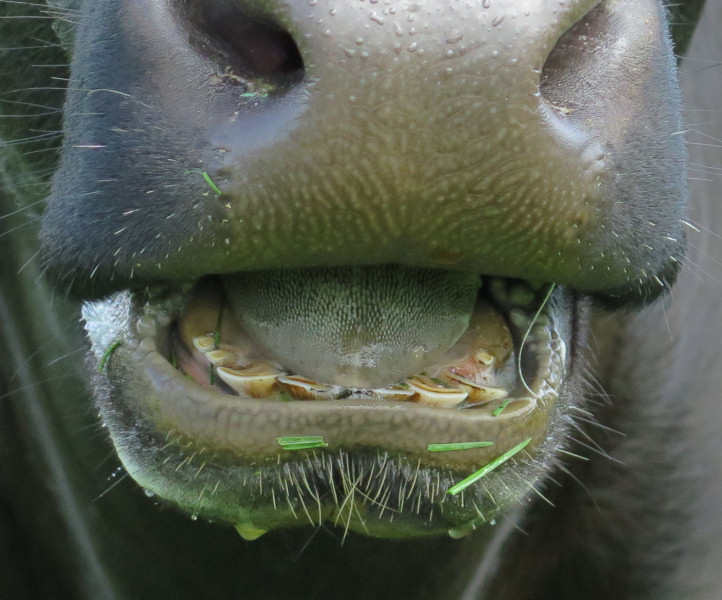 Zoom's third pair of adult incisors is in the process of eruption, the left one already up, although not yet straightened. You can see she still has eight teeth; she'll lose the forward small one on her right shortly, as the adult replacement emerges.

The teeth generally grow in pairs each year from about two years old; Zoom's only just over three, so the third pair seem a little early.

Her oral hygiene looks like it needs attention, or she smokes too much or drinks too much coffee. 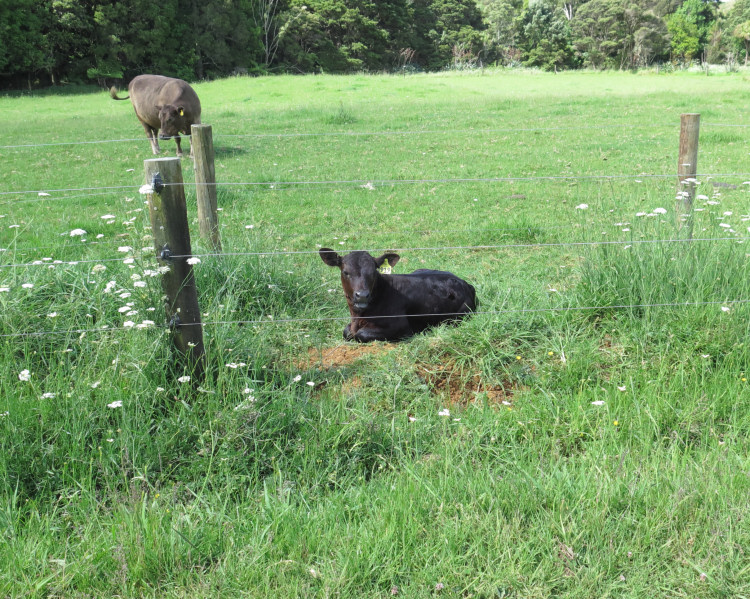 I was under the impression the bottom fence wires were now on in the House paddock but if they are, they're not hot enough to stop Zella's calf from getting into the reserve around Eva's and others' graves. 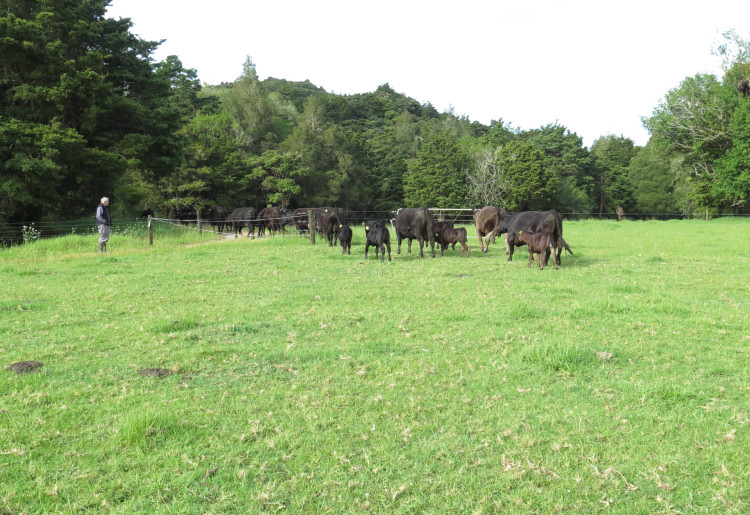 Stephan came with me to move the calves and cows from Mushroom 2 to the Swamp paddock. They were all very calm. 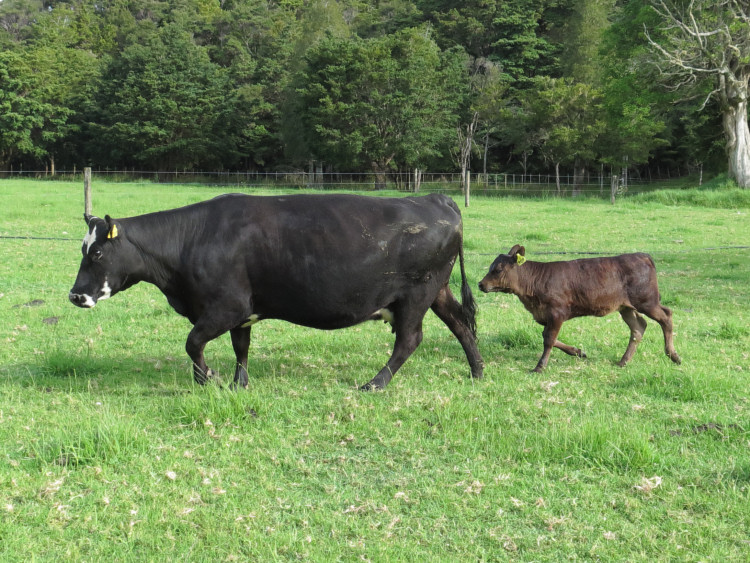 749 was feeding her daughter as I opened the gate, so they were last out; but everyone moved along nicely together with no stragglers. 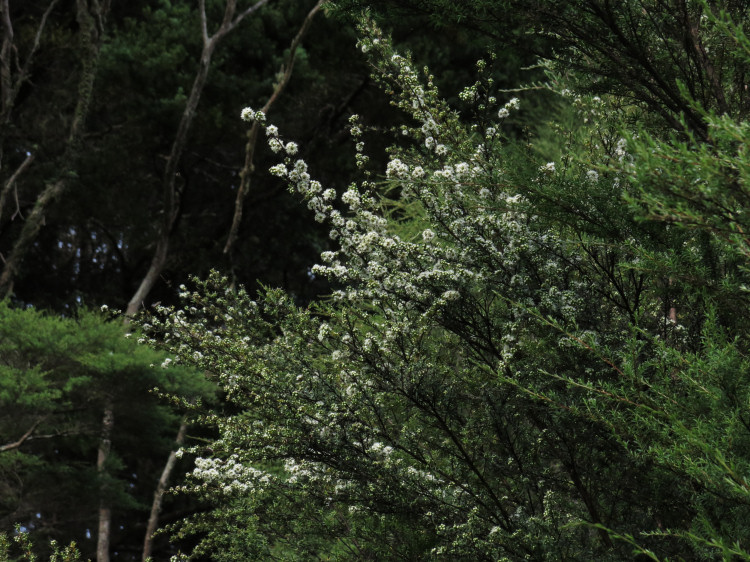 Kānuka is flowering at present.
The very-similar-looking Mānuka flowers in the early spring. 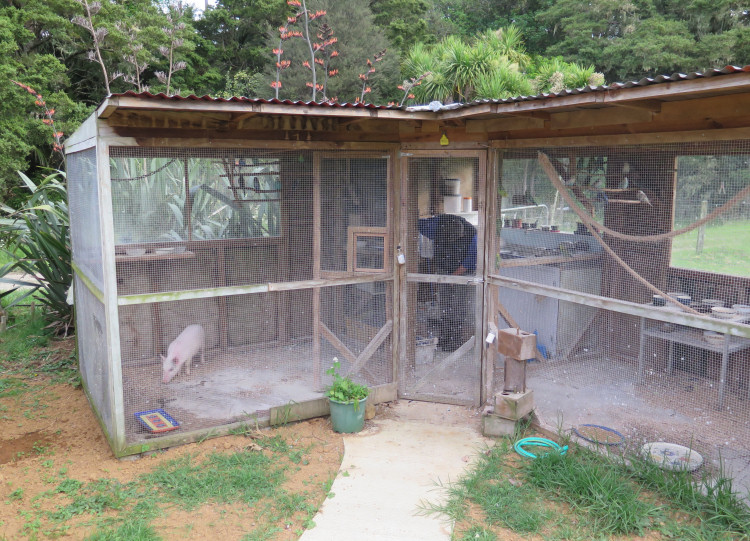 Stephan sneakily photographed me and Al in the aviary as I was feeding the birds this afternoon.

Al happily snuffles around in the dropped seed refuse as I change water, replenish seed dishes and do whatever else is necessary to keep the birds healthy and happy. Getting him out again is sometimes a little tricky.

This evening I began an exploration of the Papers Past website, this time looking for anything to do with the Takahue area and Diggers Valley in particular, information I hoped would support what I'd found in the museum and some I was prompted to look for by that material. I have always understood that Diggers Valley was named for the World War I returned soldiers who were apportioned sections of land here. In one of the clippings (I've saved it but not named it well enough to find it now I want to refer to it), a journalist wrote of looking for the Takahue-Whangape Road but finding it had by then been locally renamed by the soldier land-holders as Diggers' Valley Road.

I was surprised to find that the soldiers' settlement had occurred later than I'd previously thought, in the mid 1920s, rather than the latter part of the 1910s.

But I know from the 1912 map I saw in the Mangonui Courthouse several years ago, that the road at that time came only as far as this farm and I'm trying to find any record of the settlement of this and adjacent blocks. 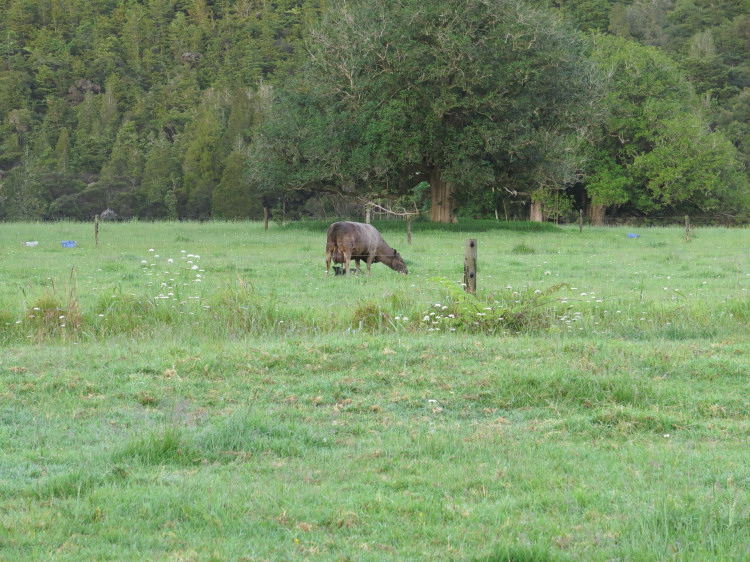 Grey 607 has a daughter! I was feeling pretty nervous waiting for this calf, hoping everything would go well, hoping she'd be a heifer. All wishes came true, all fears are now banished. 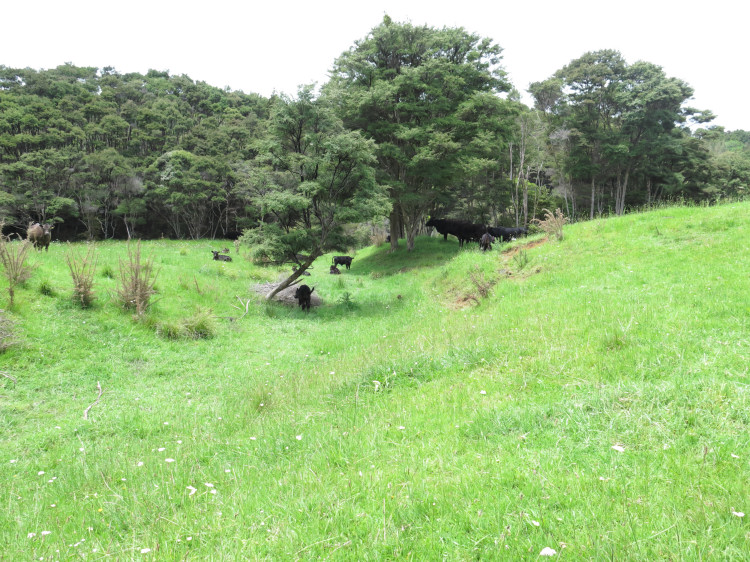 Sixteen cows and their calves, happily sitting around in the Swamp paddock. Sick-looking 904 looked better and brighter today than he did yesterday. 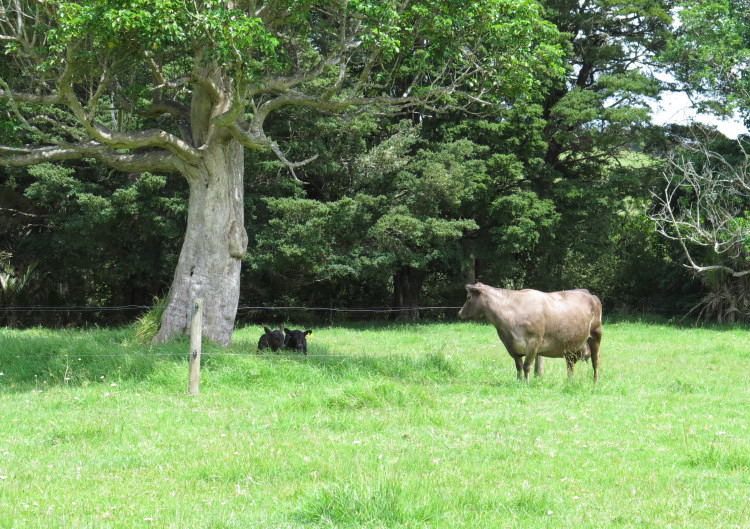 I watched 607's calf for some time last evening, waiting to work out whether or not she'd fed and then she produced a good lot of yellow poo; great reassurance that sufficient colostrum had been consumed.

Today she found a nice sleeping-in place, in the long grass around the Flat 2 Puriri. The two calves in the picture were standing just beside the sleeping baby. 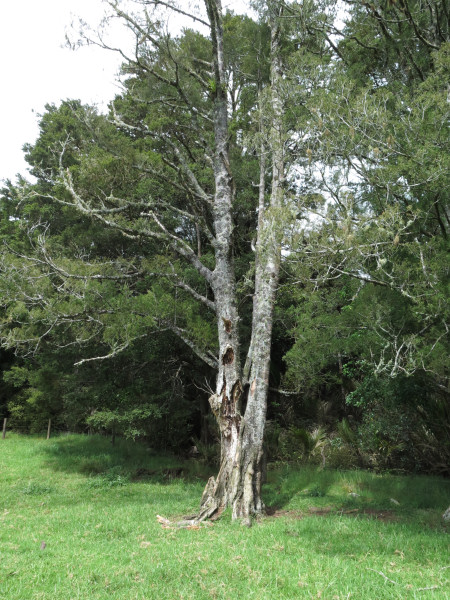 This Kahikatea stands at the bottom of Flat 2 and it has been rotting away at its base for a long time but now that decay appears to have sped up. I suspect we may have to fell it before it falls down unexpectedly and potentially dangerously. I've always thought the Kahikatea trees withstood cattle trampling around their bases but it appears I may be wrong. 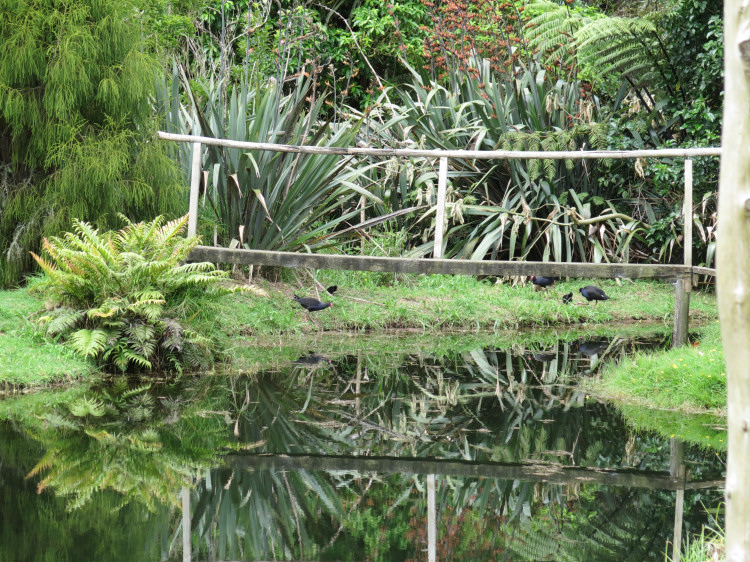 Five Pukeko chicks hatched from the five eggs on the island and all appear to be doing well. 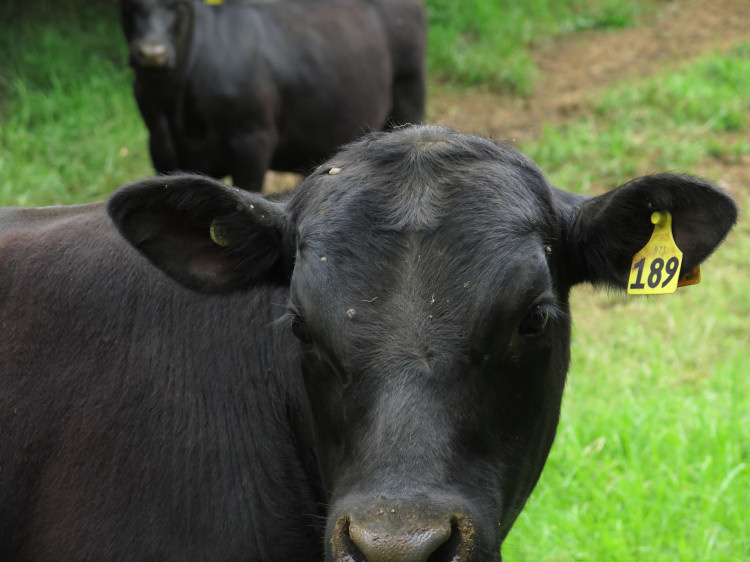 Checking on the bulls I noticed what looked like mud, but I then realised were several small warts, in the hair around 189's face. 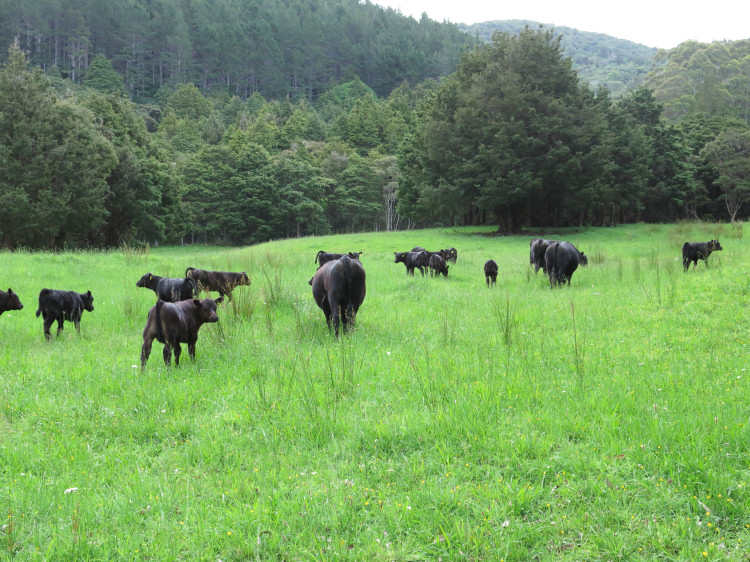 I called the sixteen cows and calves and let them through into the Back Barn, where there's just as much grass as everywhere else around the farm.

904 is the second calf from the left. He has a different sort of coat from everyone else, which makes it difficult to tell that he's unwell, or possibly makes him look worse than he is. 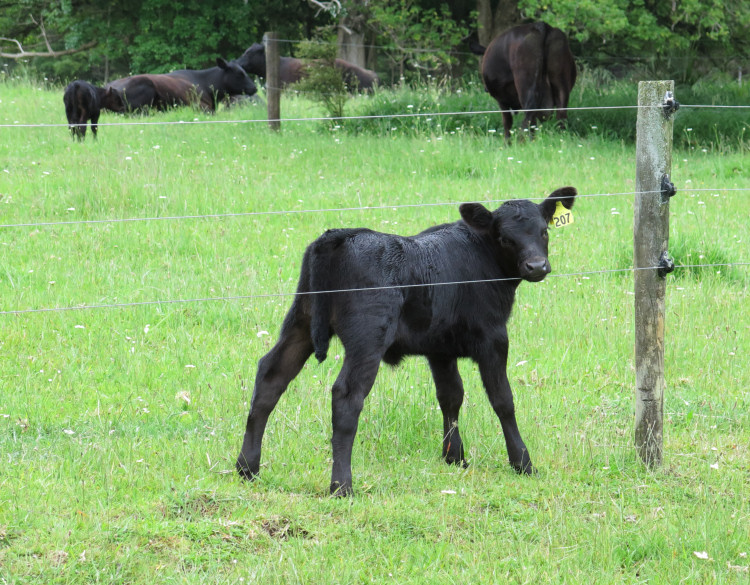 Time to turn the bottom wires back on, teach the calves that fence wires aren't there for their face-itching pleasure. 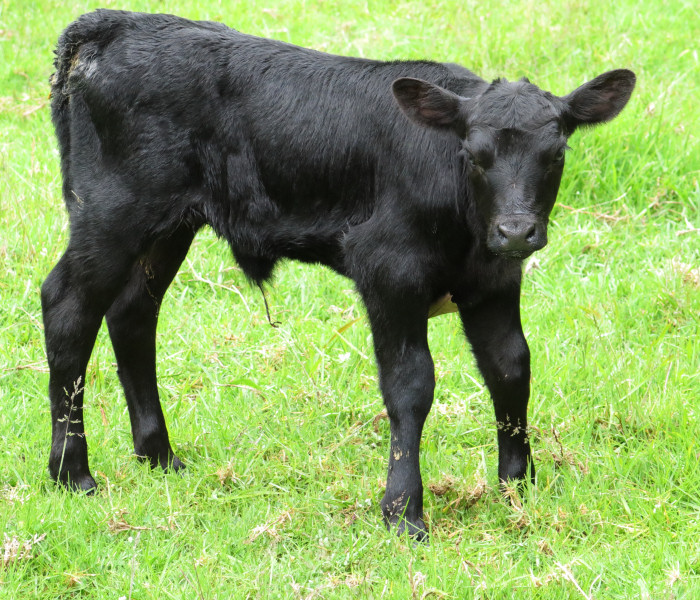 607's little calf has the lowest hair-whorl I can recall seeing.

The placement of a hair-whorl on the face of an animal has been found to have some correlation with its temperament. 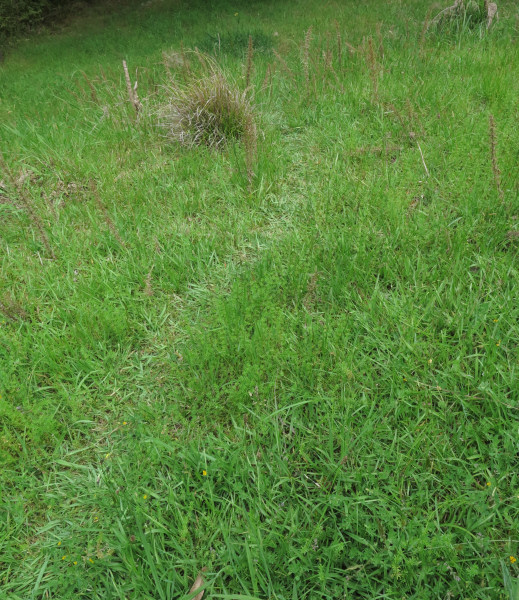 Somebody is frequently tracking through the Spring paddock from one of the stream reserves to one of the big Tōtara trees on the other side - actually there are many such tracks across the grass. The tracks are probably made by possums.

We've both been looking out for Tarweed and finding it in most of the usual places. I carry empty bread bags in my pockets everywhere I go, ready to receive the plants I pull out - although today I didn't seem to have any with me and had to carry a bunch of sticky plants carefully back to the vehicle to a bag there. Some of the plants are still in bloom, others finished and their pods look ready to release their tiny seeds. 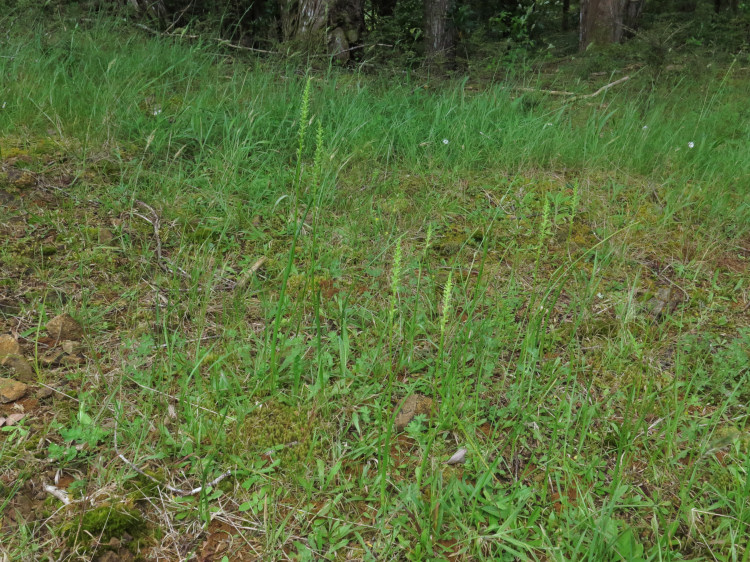 Onion orchids, growing in the corner nearest the reserve area in which I've formerly found several other species.

My feeling this year is that there are fewer orchid plants around, presumably due to the very dry year, following last summer's drought. 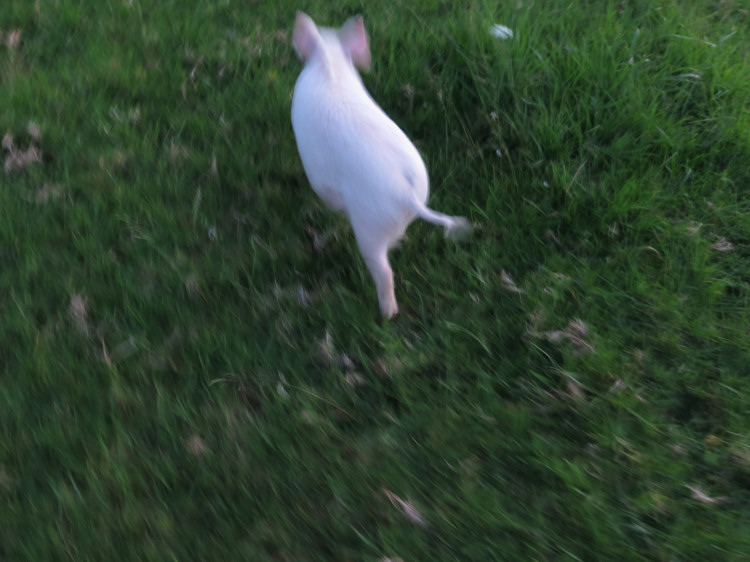 There was a continuous rumble this evening as the world's other noises subsided with the light, coming from the coast to our south west. There must have been some strong winds across the Tasman Sea, bringing big swells to the coast. There were barely-audible thumps under the general roar, which must have been waves crashing onto the beaches. 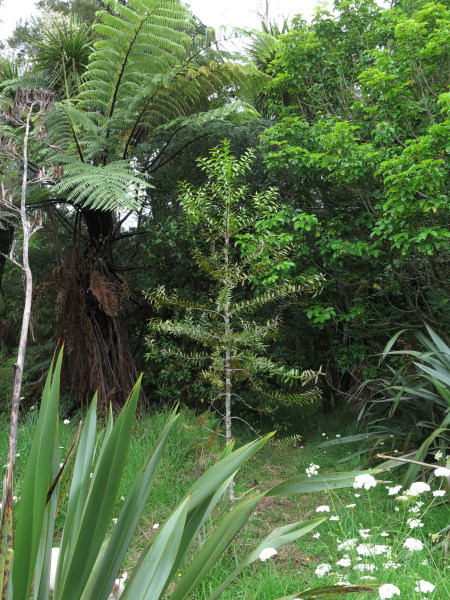 With little extra attention from us during the insufficiency of rain, the young Kauri in our garden reserve area appear to be continuing to grow well. 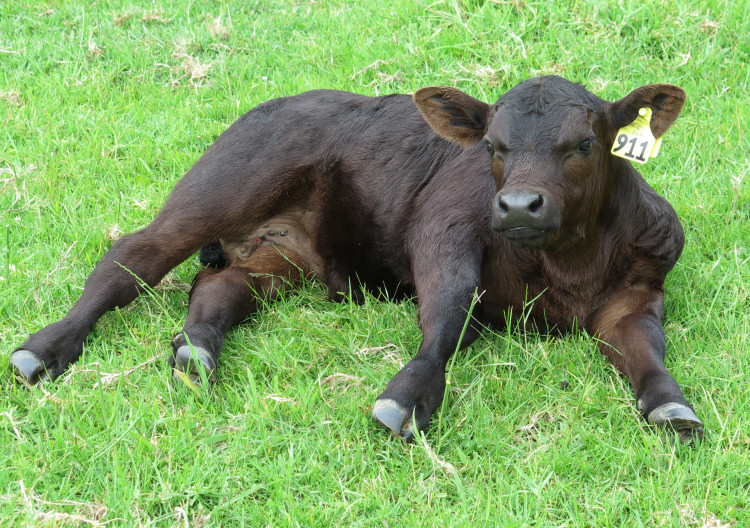 The earliest calf to be castrated by rubber ring still has his shrivelled scrotum three and a half weeks on from that procedure. 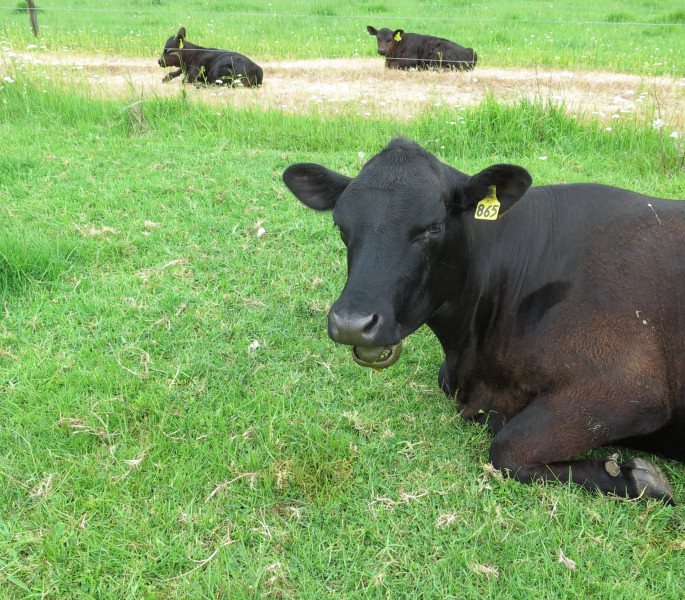 This afternoon I combined the two mobs of seven cow/calf pairs. The calves of 865 and 723, who've been together since they were born, decided to take themselves off alone under the fence to the lane, away from everyone else.

865 is dribbling green saliva, which I presume is due to some change in her dentition. The deciduous molars fall out and are replaced by permanent teeth throughout their youth and perhaps when the permanent teeth are not fully in place, whatever the animal is chewing leaks out. 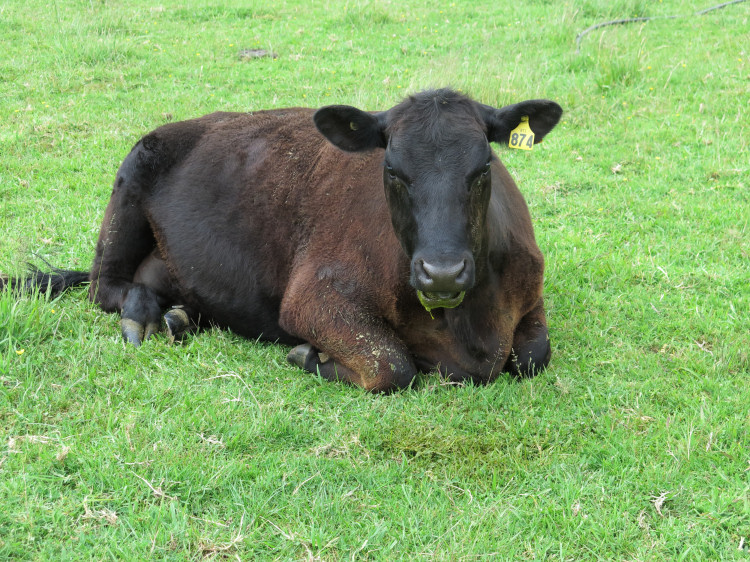 874 is doing the same thing. I keep finding little patches of green dribble wherever any of the two-year-old heifers has been sitting ruminating. 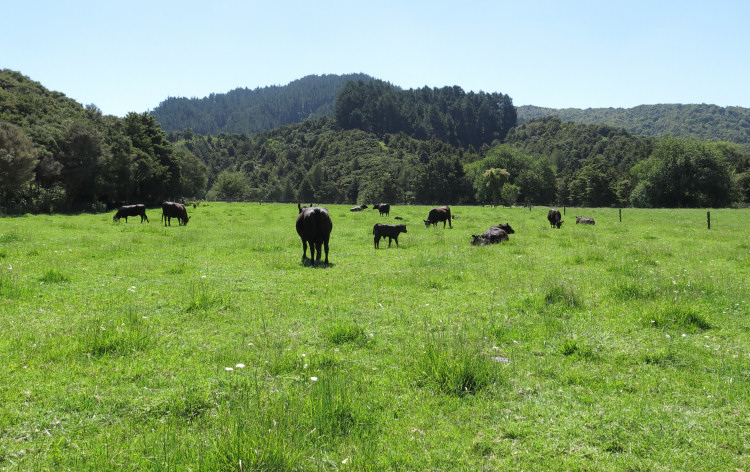 A beautifully fine day during which the animals lay around enjoying the warmth.